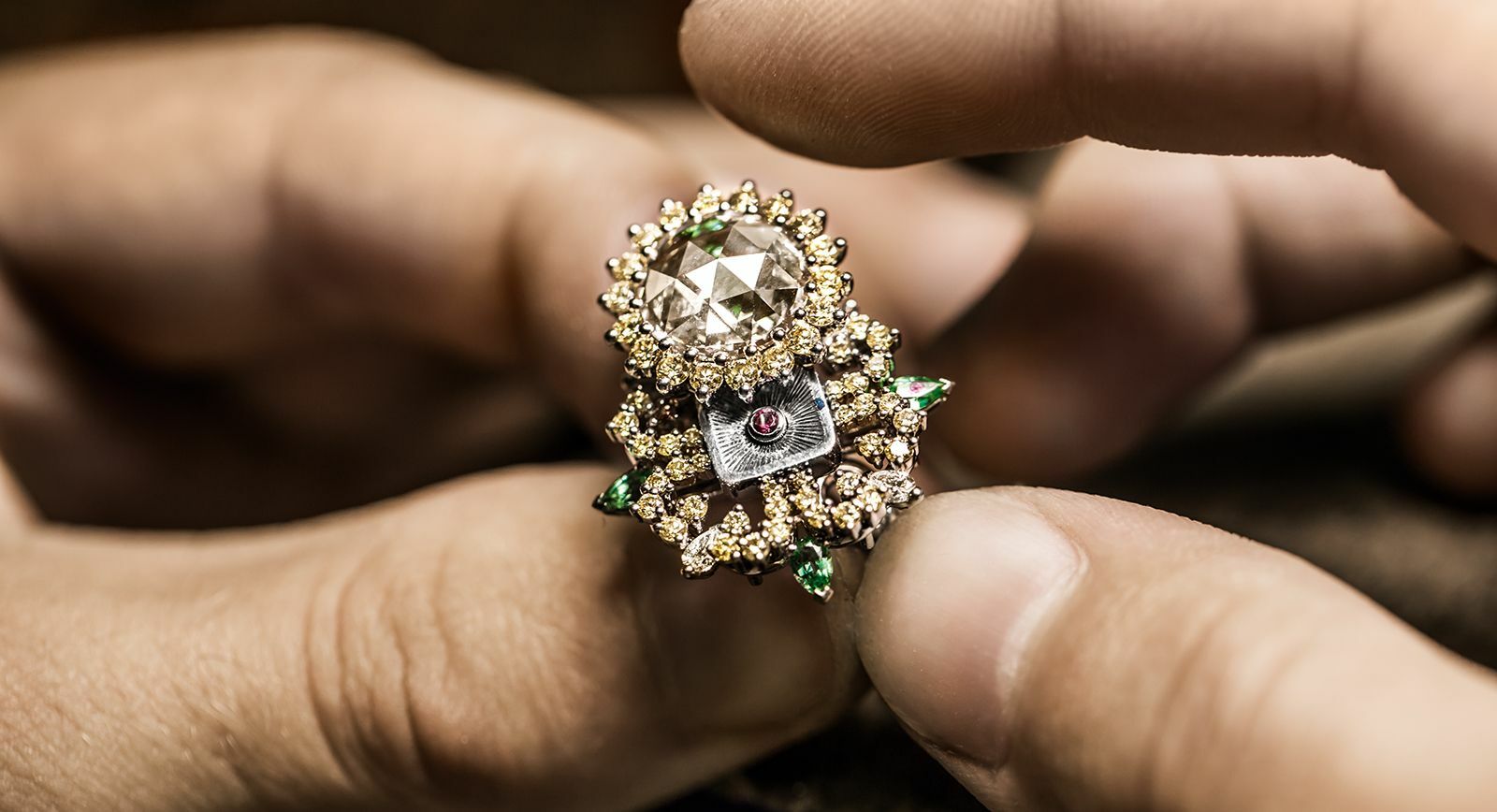 Victoire de Castellane, the sole visionary and director of the French jewellery house Dior’s collections, has completed her ‘Versailles’ trilogy – a kind of haute joaillerie symphony – with an impressive third suite.

The first, named ‘Dior à Versailles’, introduced the grand halls of the summer residence of French kings, or rather the impressions and associations that arose from them in Victoire’s imagination. She named the pieces in keeping with the names of the palace’s rooms and halls: “The Marble Courtyard”, “The King’s Apartments”, “The Mirror Gallery”, “The Salon of Mars”, “The Salon of Venus”. The second part of the Dior à Versailles trilogy was ‘Côté Jardins’ – 66 pieces inspired by the parks and gardens of Versailles, built under the reign of Louis XIV of France by landscape architect and the king’s principal gardener André Le Nôtre, with the pieces named after their corners and pavilions: “The Water Theatre Grove”, “The Bosquet de la Colonnade”, “The Queen’s Village”. 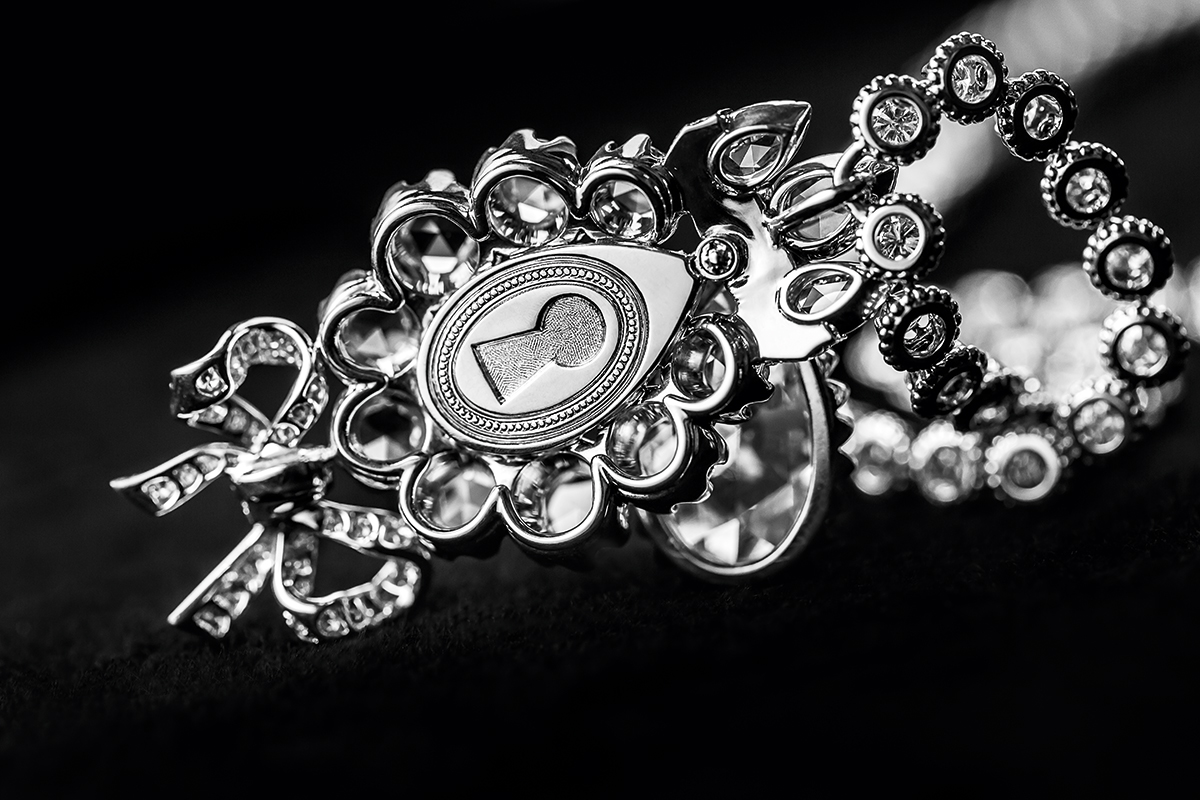 Once Victoire had shared her impressions of the openly ceremonial elements and more visible spaces of the Palace of Versailles, only the secret and hidden parts of it remained to be uncovered. The final part of the trilogy, Dior à Versailles – ‘Pièces Secrètes’, débuted in January 2018 at Paris Fashion Week. 36 pieces (22 rings, 4 pairs of earrings, 9 necklaces and a bracelet) are stylised à la Baroque and, in addition to secret rooms and passages, they embody the themes of sentimentality, memory and even mourning - as symbolised by locks of hair, skulls and other emblems of Memento Mori jewellery. “I wanted to tell the story of all the halls hidden from prying eyes, accessible only to the king and queen,” explains Victoire de Castellane. “I wanted to play with ghosts and skulls, hinting that there was something invisible to the plain eye: you don’t know what it is, but you feel its presence.” 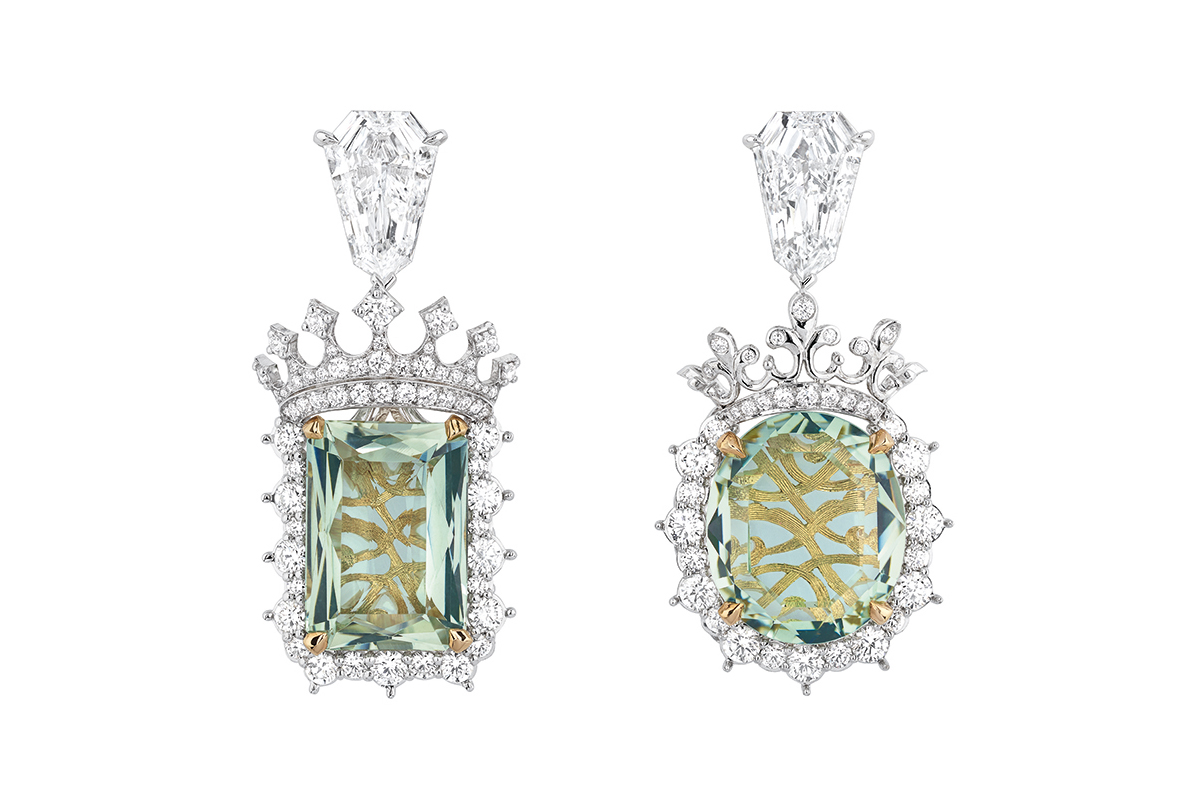 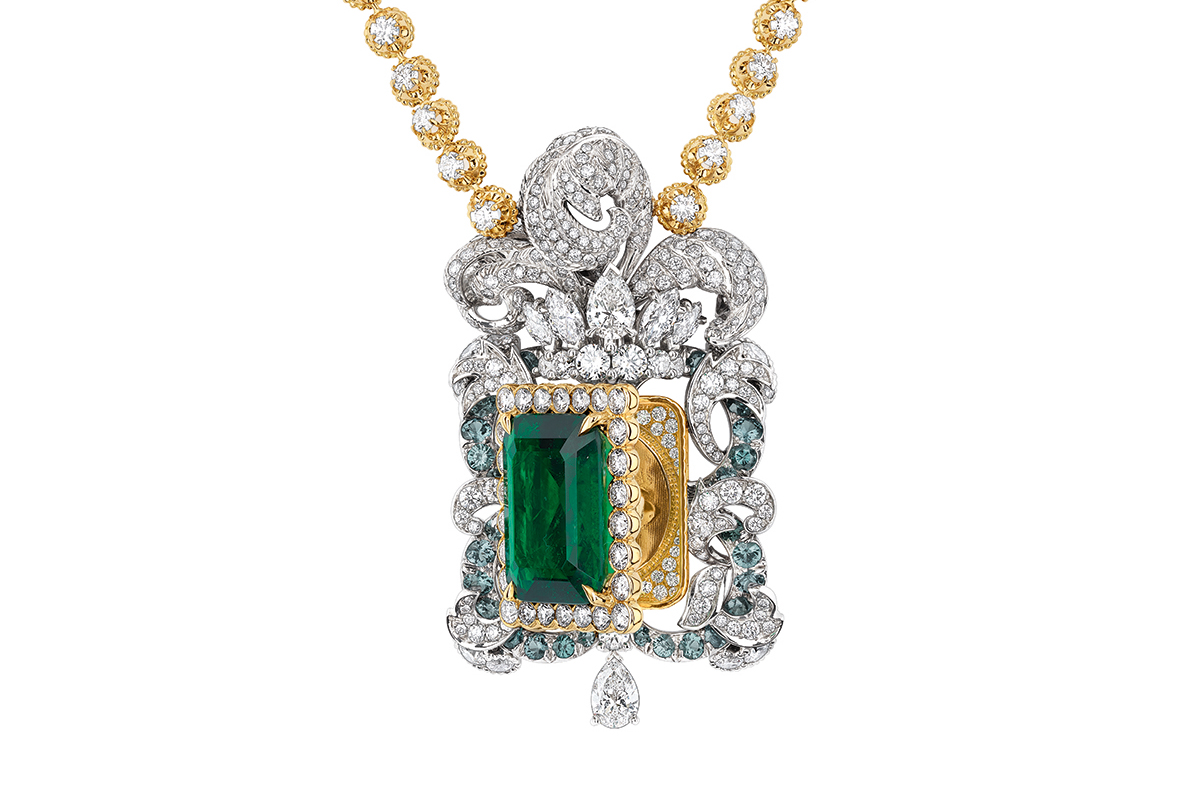 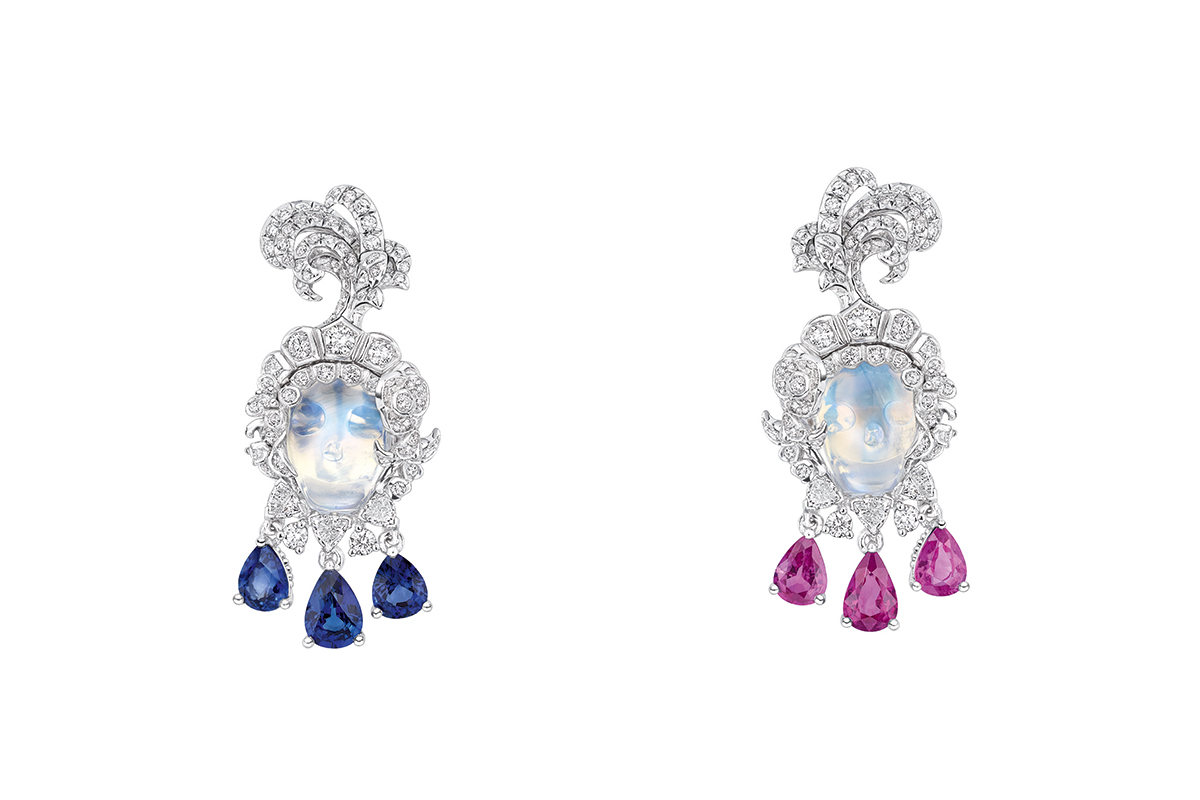 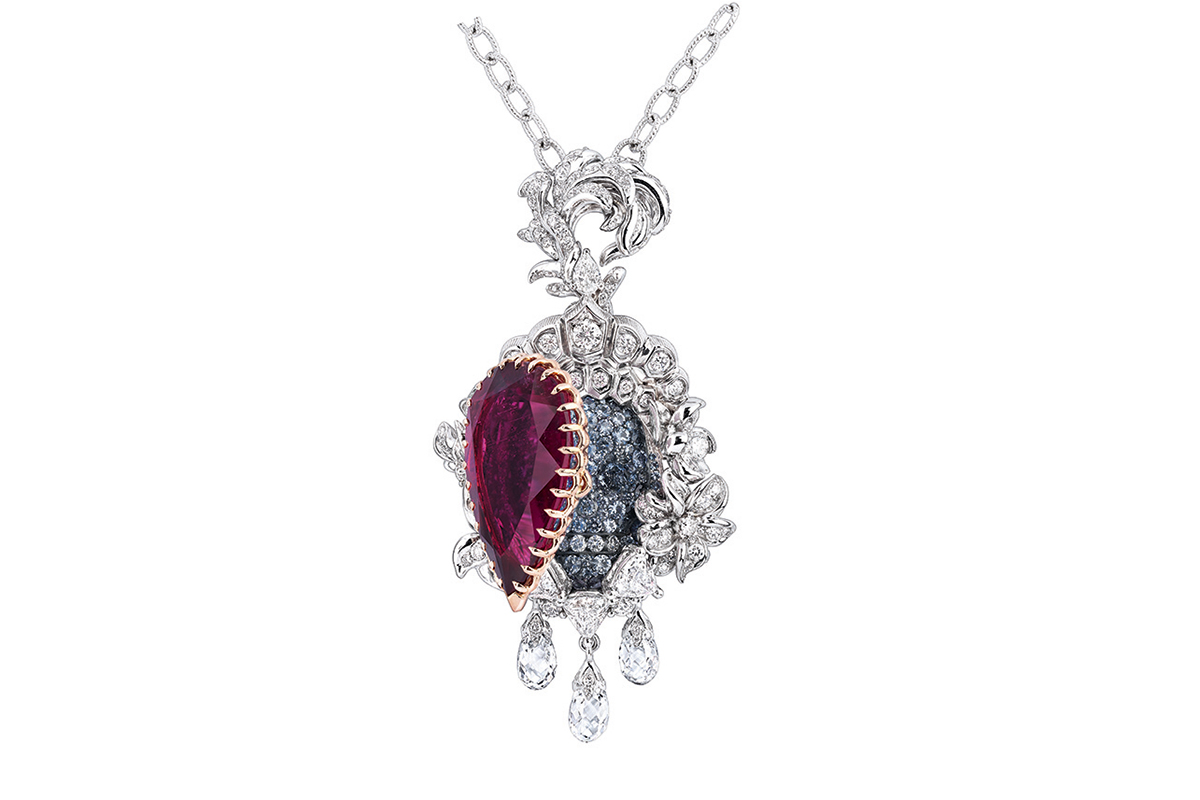 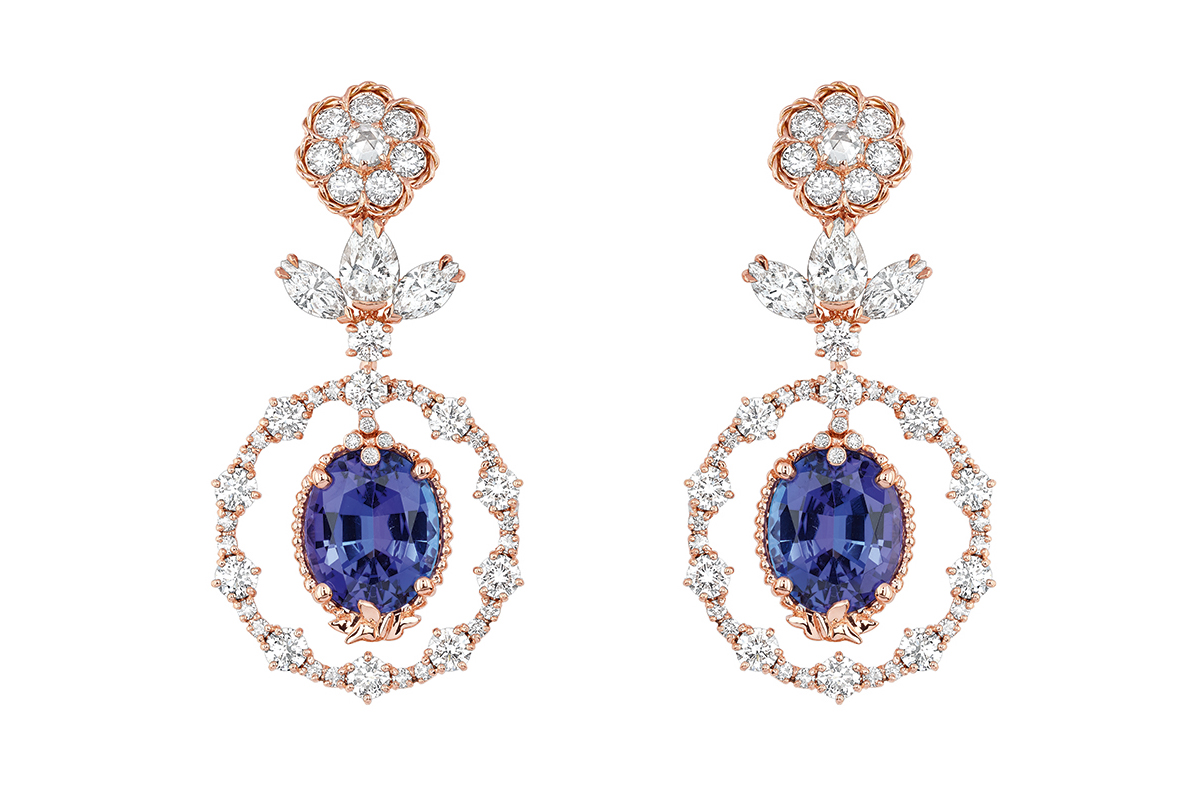 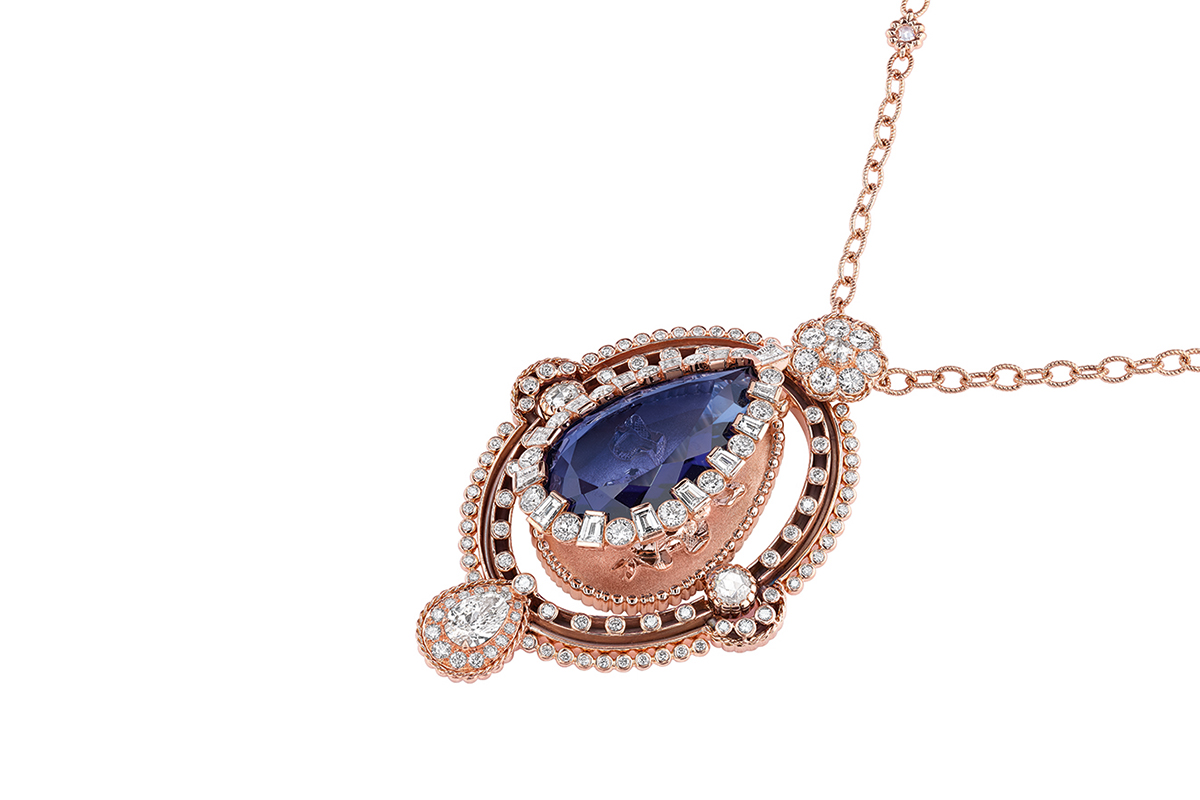 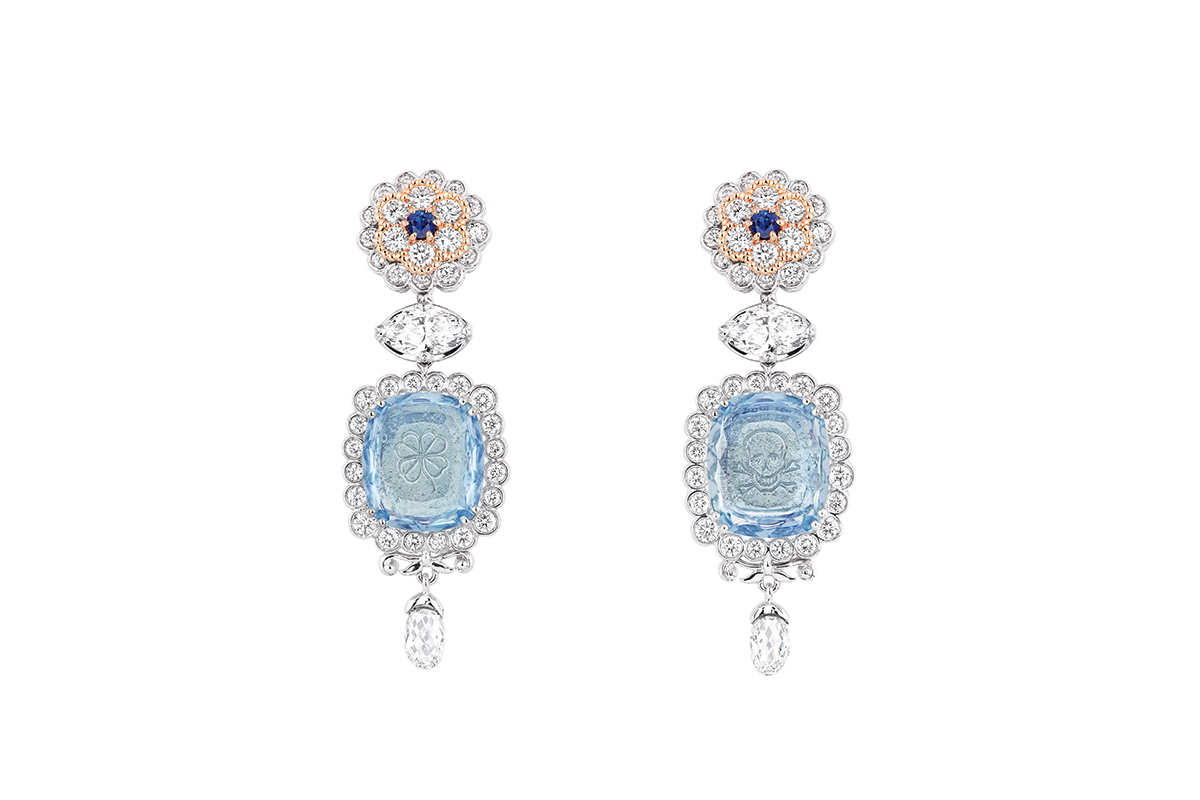 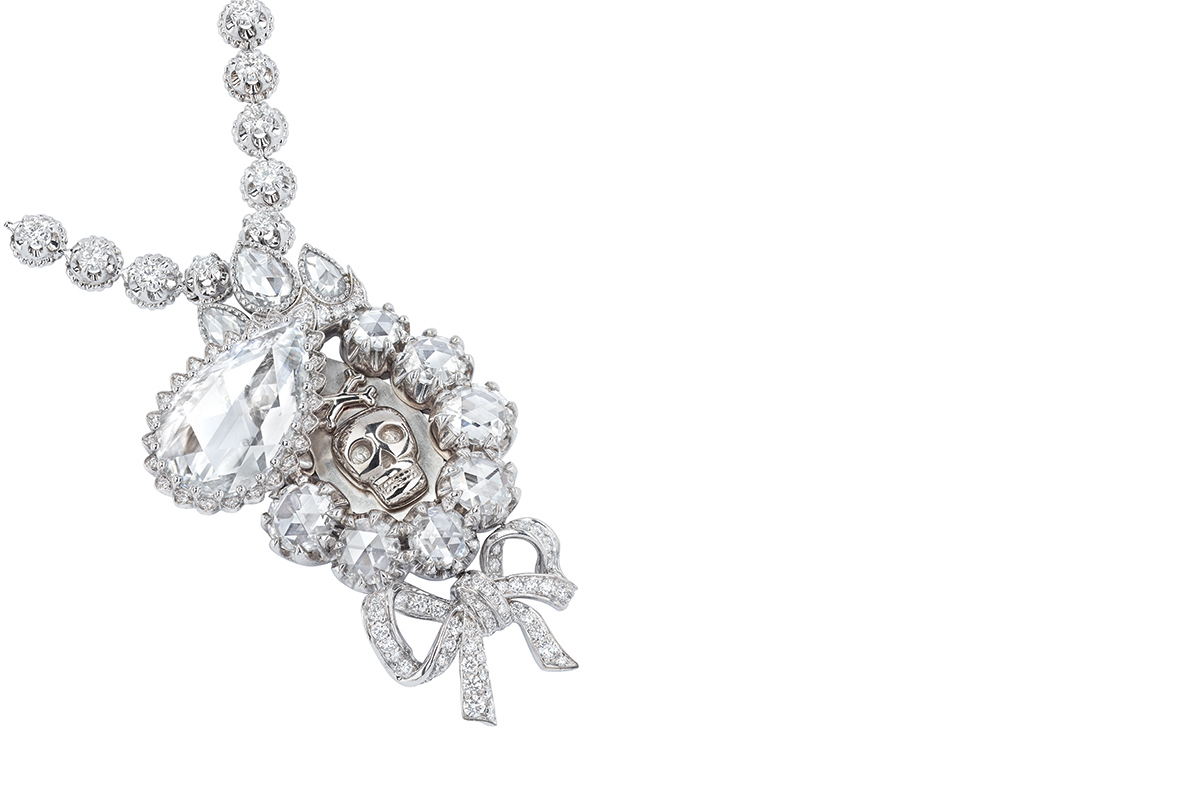 Like the secret doors, the catches in the walls and cabinets with invisible drawers, the jewellery of the collection has its secrets: mechanical moving parts, hidden details and unexpected surprises. The pear-shaped rubellite necklace, ‘Vanité Rubellite’, assumes the form of a suspended candelabra, however on closer inspection the gemstones look like red glass, from whose outlines emerge the phantoms of skulls. The same illusion is employed by the jeweller for the two-finger ring ‘Volupté Aigue-marine’ – only the stone isn’t a bloody rubellite, but a gentle aquamarine, and underneath is not a skull, but kissing doves. The ring ‘Vanité Miroir’ is even more interesting; the skull there appears in relief on the underside of a diamond lid within a secret box, and is reflected by the mirror underneath it – the owner sees only the reflection. 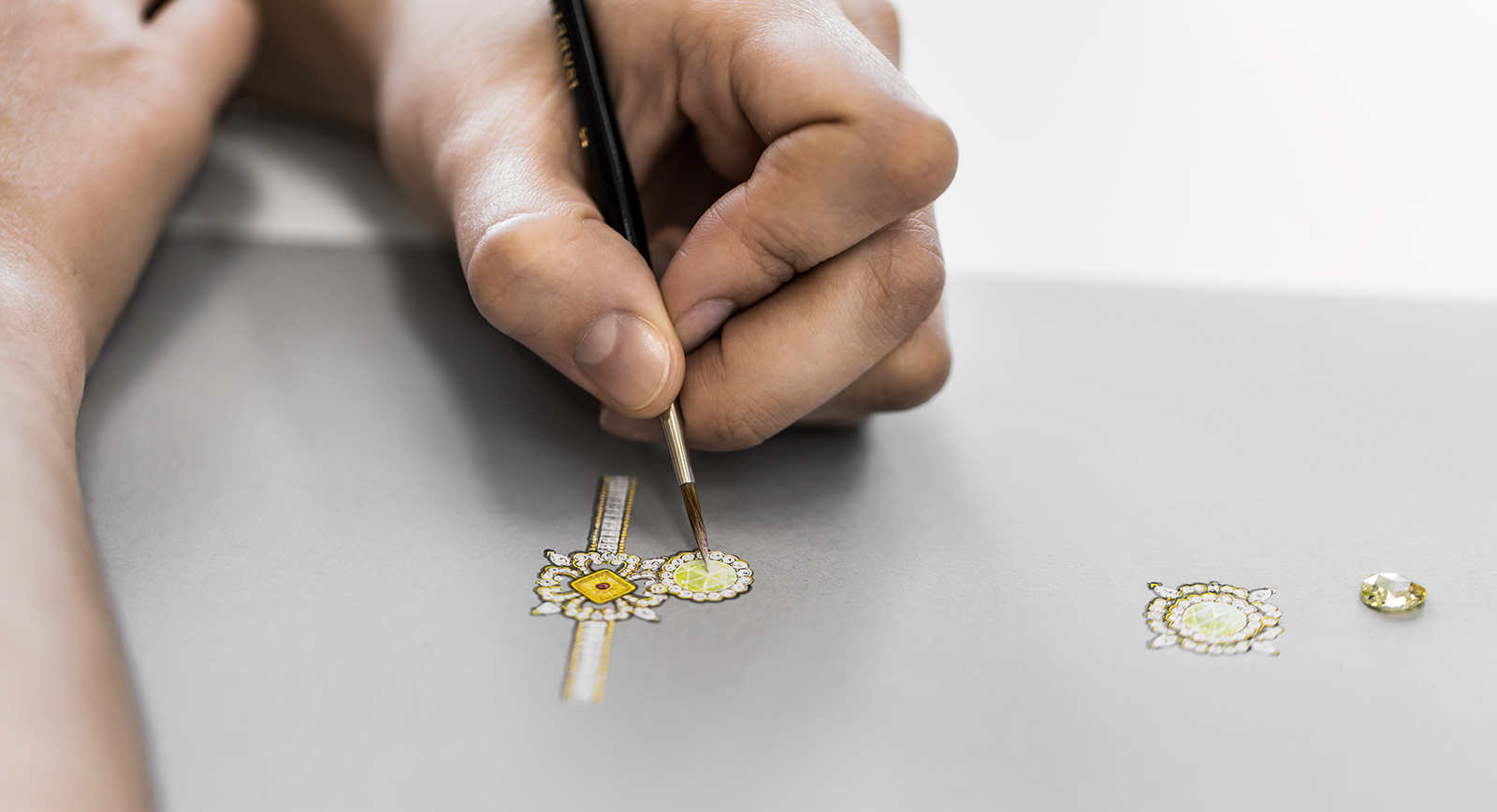 In the ‘Vanité Béryl Vert’ ring, beneath the lid of a transparent green beryl is a thing engraving in the form of a tree of life, and asymmetrical earrings from the same line - named ‘Cachette Béryl Vert’ - conceal golden curls under the beryl ‘glass’, just as hair was worn in the Victorian era during mourning within sentimental medallions, holding on to the memory of a deceased loved one who is forever gone. The ‘Vanité Pierre de Lune’ earrings frighten and fascinate with either faces or skulls, carved from a deadly shimmering moonstone using the glyptic technique to create an intaglio. The ‘Cachette Tiroir’ rings are equipped with secret contractable compartments – for spirits or for poisons. Under the sliding opal lid of the ‘Cachette Opale Claire’ is an engraved crown, and beneath the blue spinel lid of the ‘Volupté Spinelle Bleu’ is a crucifix laid out with diamonds. 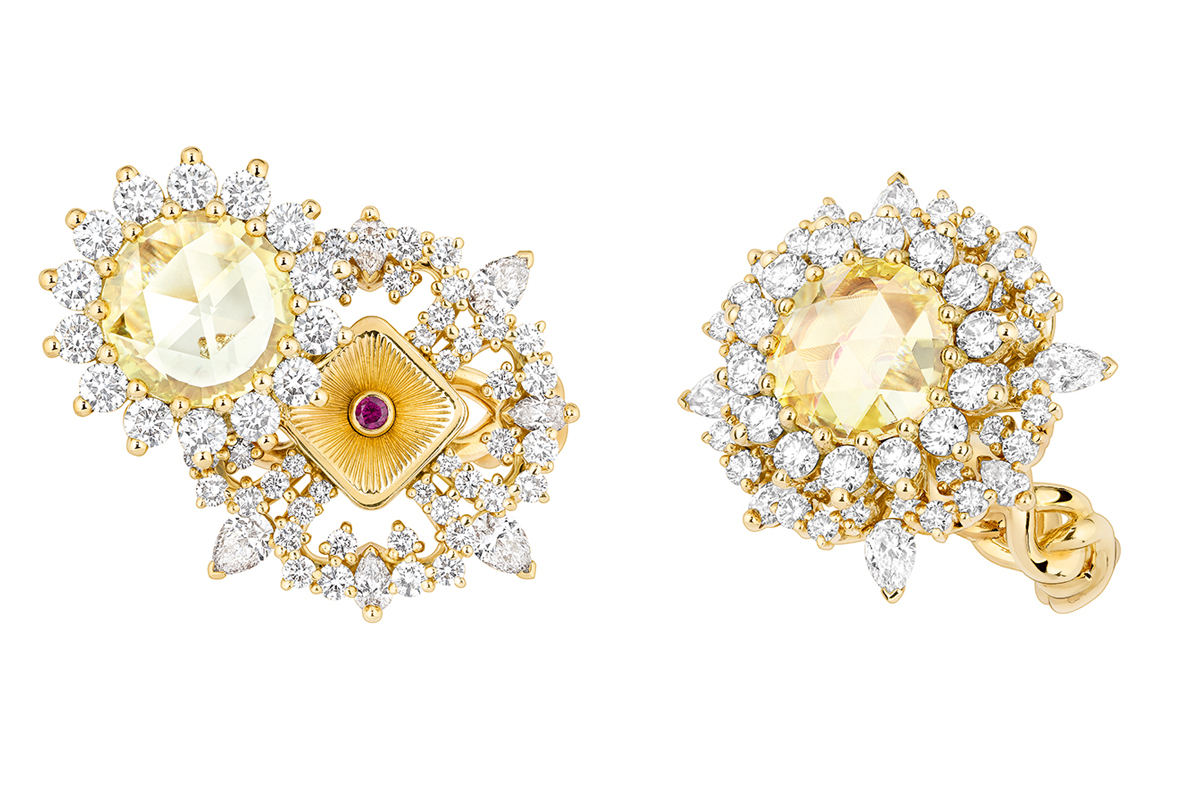 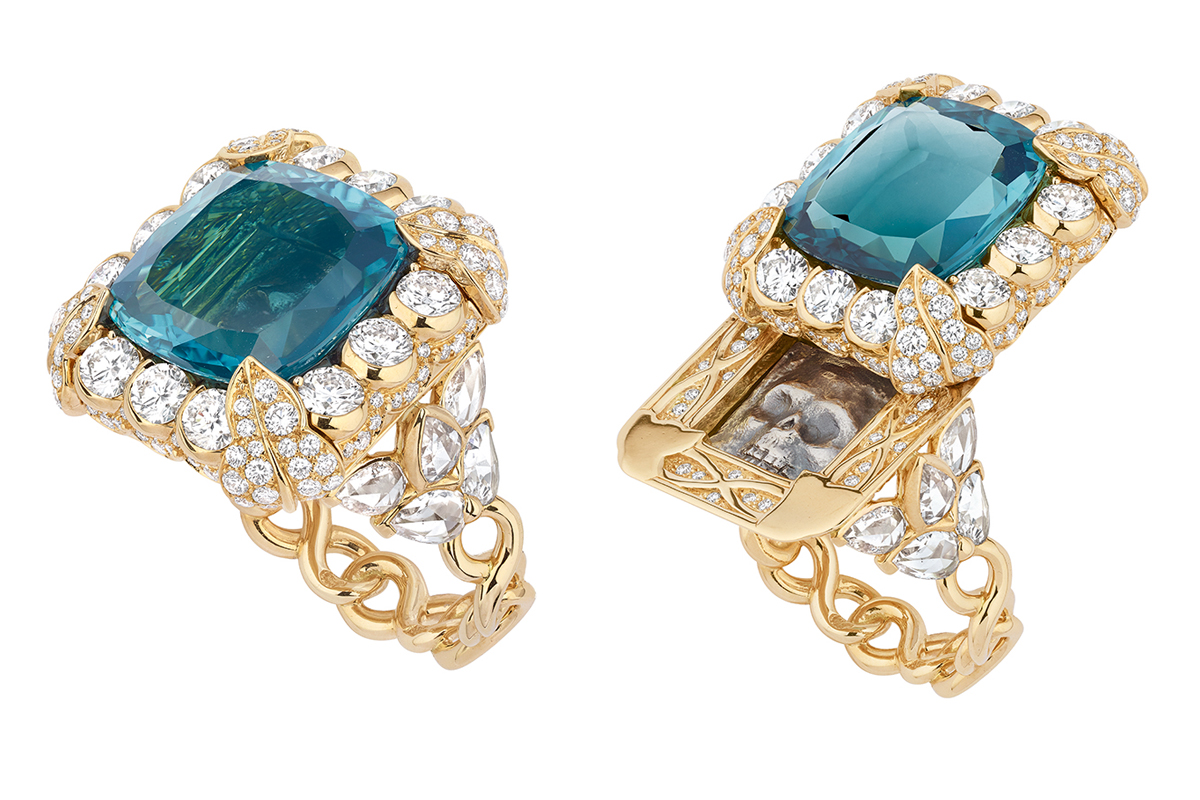 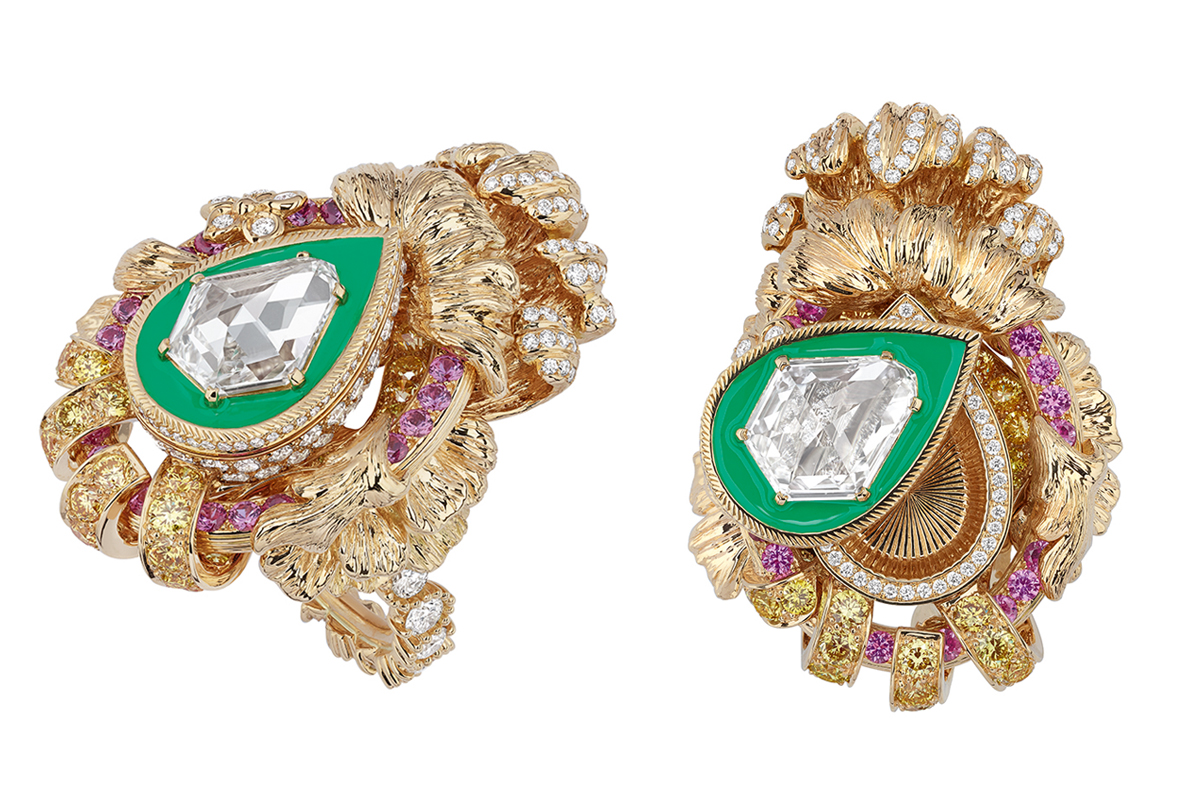 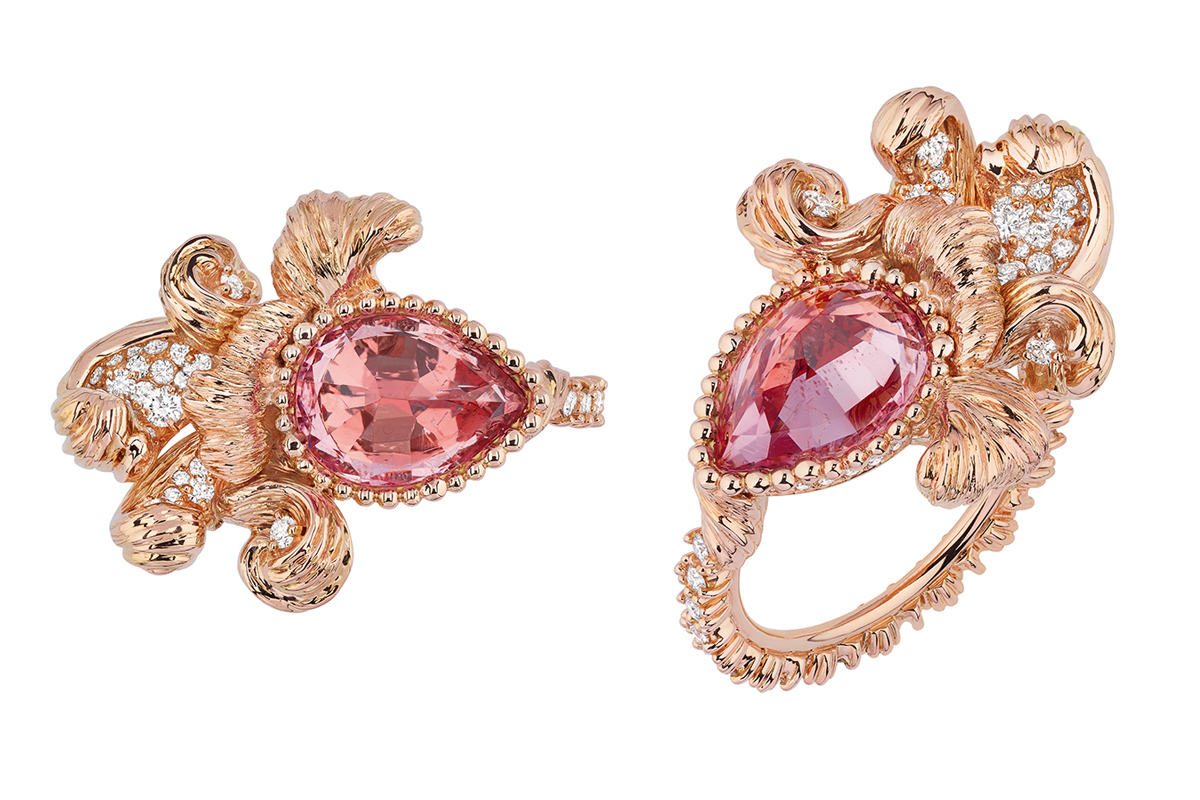 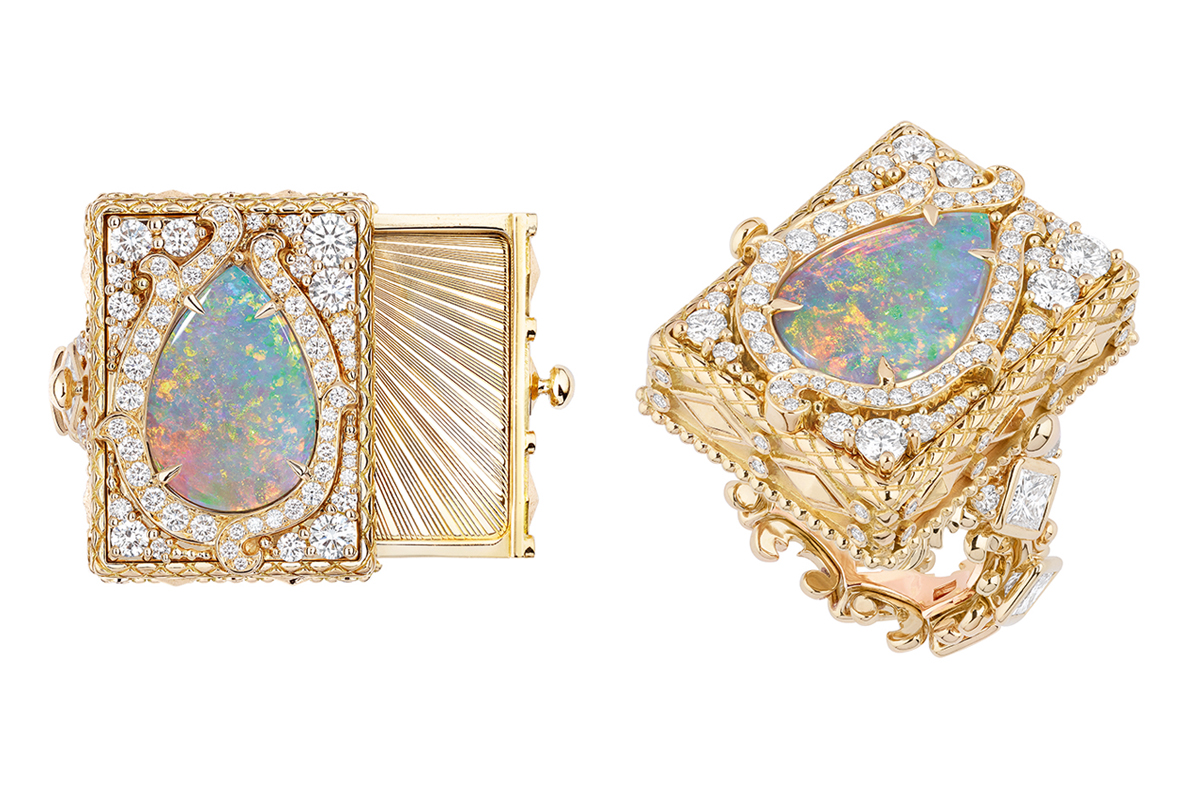 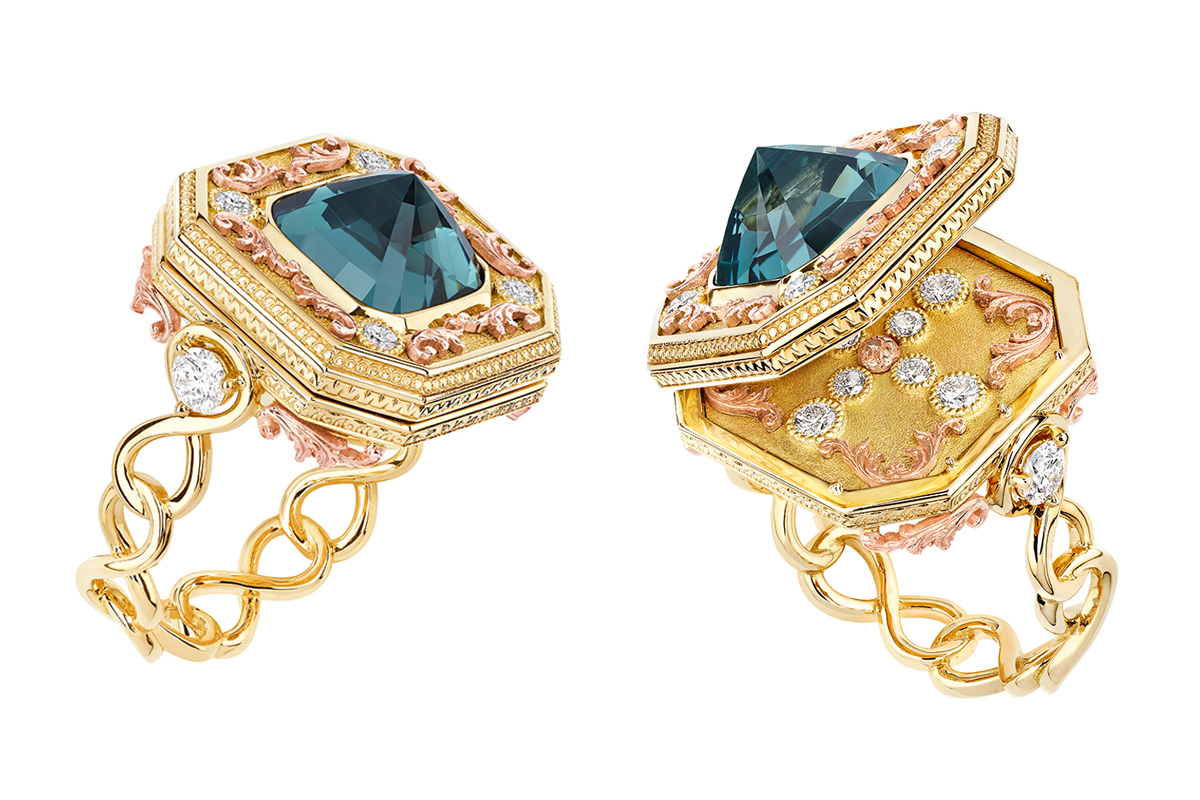 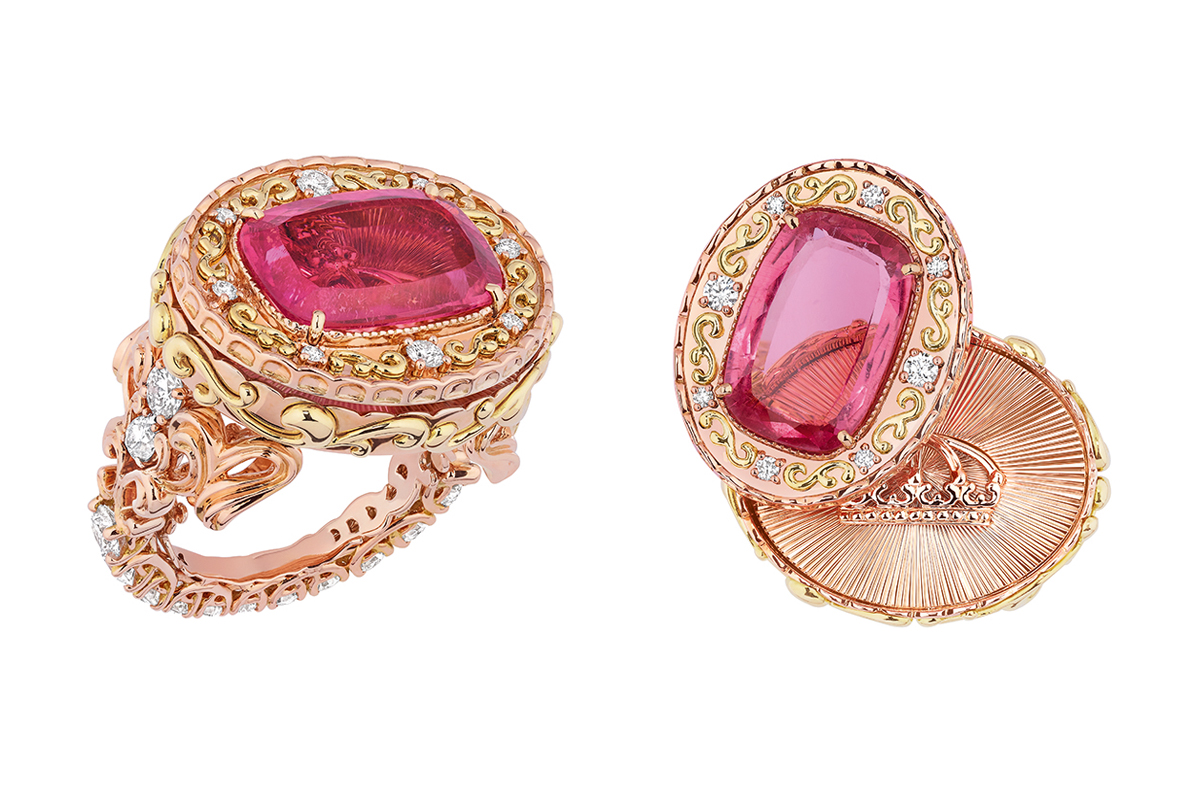 Castellane plays with the great extravagance of days of old: golden volutés and rocailles in yellow gold appear like pieces of fine brocade, lined with patterns of rose gold, and diamonds that are out of kilter with their usual contemporary brilliance in the older ‘rose’ cut, but possess a unique theatrical authenticity, like rhinestones under a spotlight.