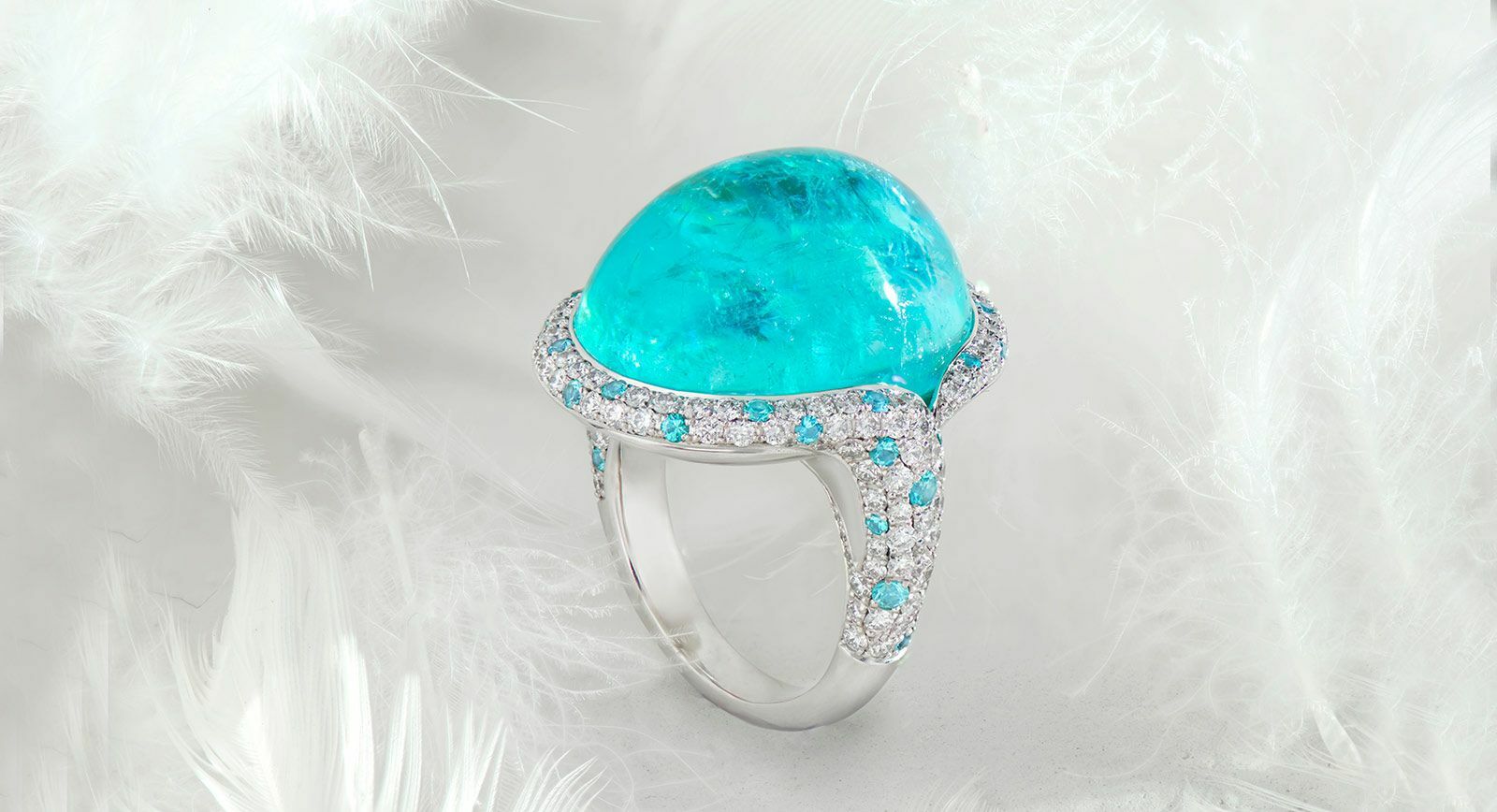 Why do some gemstone colours have special names and others are just ‘blue’, ‘red’ and ‘green’? It’s an interesting question and one that I started answering with the help of gem dealers and brands in part one of this article. Next, we are moving on to other brand-like gemstone monikers, including a trio of tourmalines, an Aztec-inspired opal, and a shade of sapphire that’s evocative of European summer days…

Who has the power to ‘brand’ a gemstone? If you’ve read part one of this two-part feature, you’ll know that this isn’t an easy question to answer. Sometimes, gemstones are named for their point of origin, the characteristics of their colour or the person who discovered them. When these names stick and stand the test of time, becoming a recognisable trade name among gem dealers and collectors, then we can say they’ve become like gemstone brands. In part two, I would like to draw your attention to five more identifying names that have taken types or shades of gems and turned them into the jewellery industry’s versions of ‘household names’. Let’s meet some gemstone celebrities… 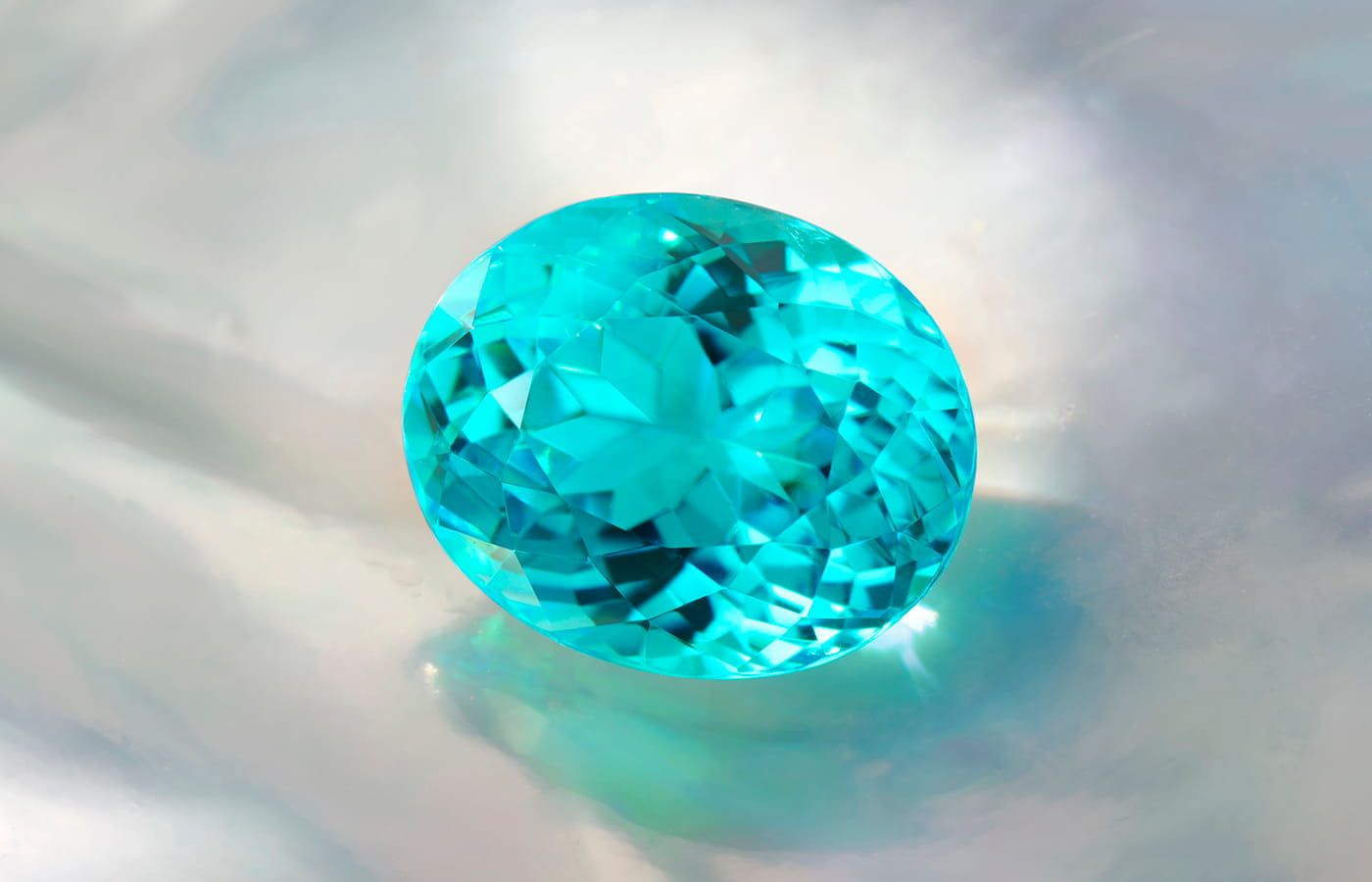 Michelle Althöfer of German gemstone lapidarist, Karl Faller, explains: “Cornflower blue sapphires are rare and popular because of their bright, highly saturated and ‘open’ colour with a good lustre, which is reminiscent of the valuable Kashmir sapphires. It looks fantastic in every light; therefore, these stones are perfect to wear in the evening without looking too dark. An unheated ‘cornflower blue’ sapphire from Sri Lanka is approximately 30% higher in price than a ‘blue’ one.”

If you are looking for an incredibly old name that signifies a particular gemstone hue, then look no further than rubellite. Dating back to the late 18th century, ‘rubellite’ comes from the Latin 'rubellus' (reddish) and the Greek 'lithos' (stone). It is used to describe pink, red, purplish-red, orangy red or brownish-red tourmaline, although some argue that the term shouldn’t apply to pink tourmaline, according to the Gemological Institute of America (GIA). The International Colored Gemstone Association (ICGA) say that a genuine rubellite should have the same intense ruby red colour under artificial light and natural daylight. “If the colour changes when the light source does, the stone is called a pink or shocking pink tourmaline,” explains the ICGA website. 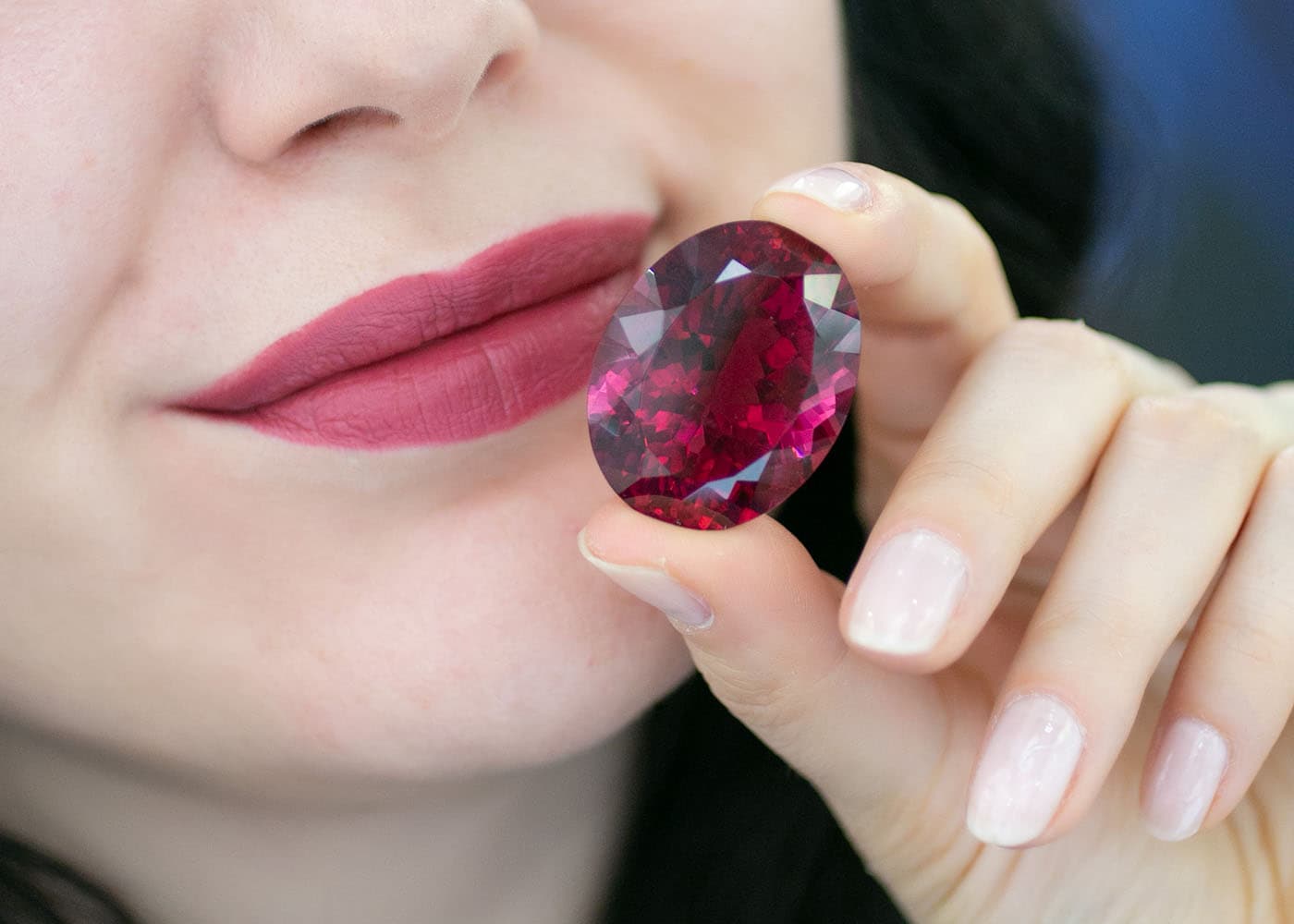 “Rubellites have become more and more popular the last few years,” says Nicole Ripp of Idar-Oberstein-based lapidary, Groh + Ripp. “At the same time, though, really nice precious material is hard to acquire. Although prices have increased tremendously, the demand continues to stay high.”

In 1987, a new hue of tourmaline was unearthed in Brazil and named for its place of discovery, Paraíba. This is an incredibly rare shade of tourmaline with a neon edge that results from the presence of copper and manganese in the gemstone’s atomic structure. Once the mines in Brazil were depleted, other sources of ‘Paraiba tourmaline’ appeared in slightly less vibrant hues from Mozambique. Technically, these should be called ‘Paraiba-like tourmalines’ but often this distinction is missing in favour of brand recognition! 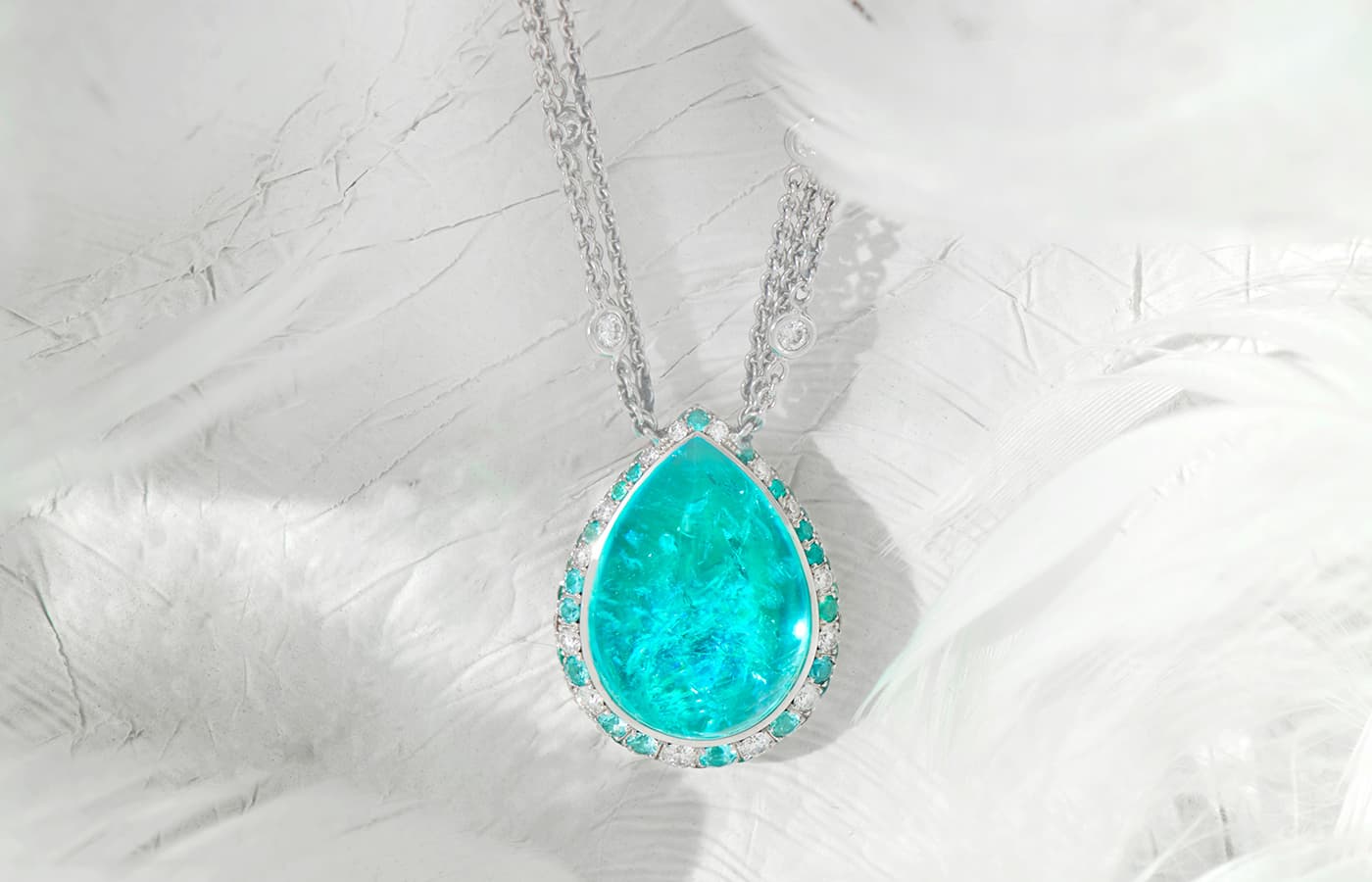 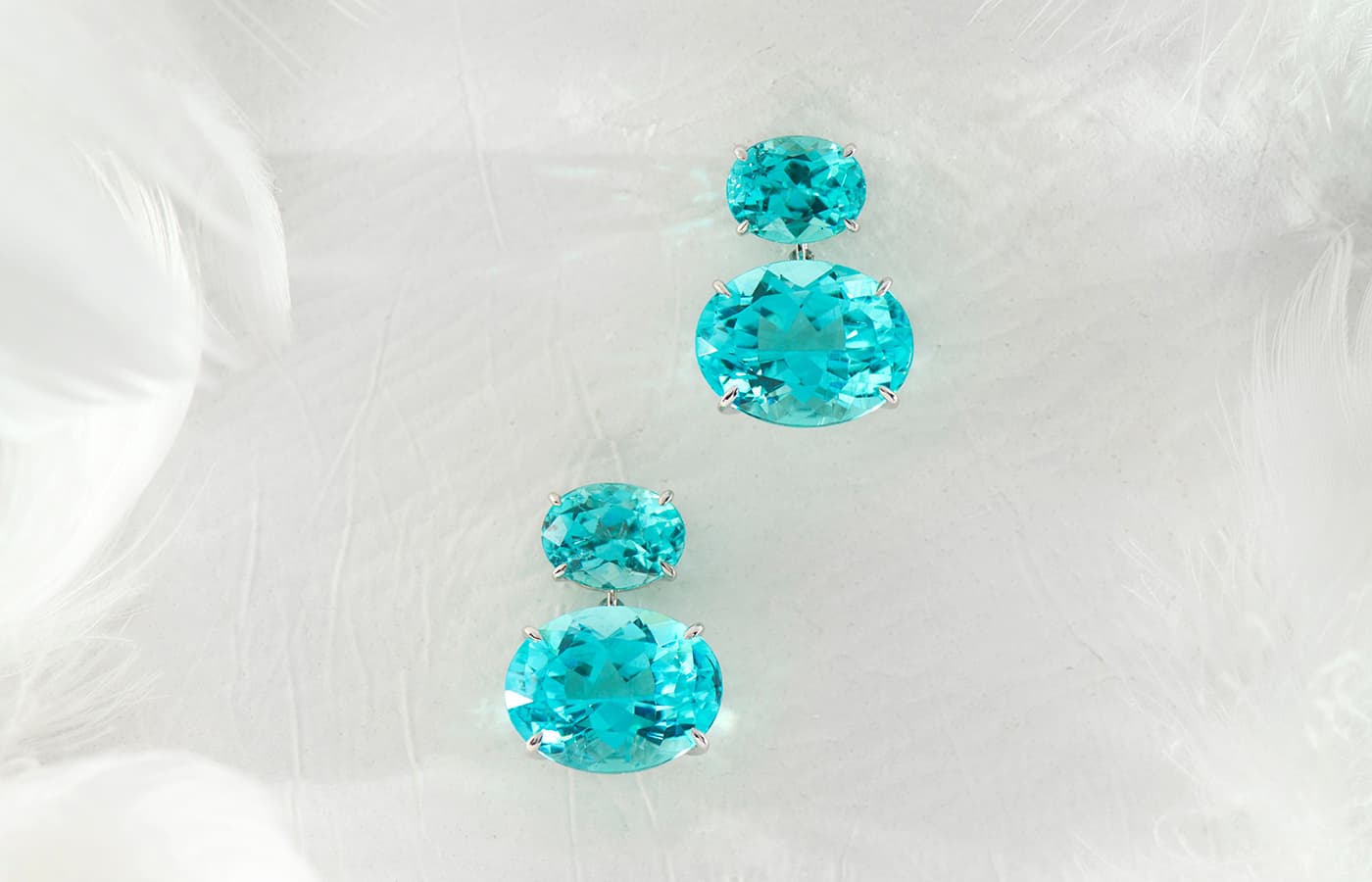 Gemstone expert and bespoke jeweller, Doris Hangartner, explains: “The Paraiba Tourmaline is the rising star in the gem world. The beauty of the tourmaline rainbow family is mesmerizing, but it is the unique mineral combination of both copper and manganese, that gives Paraibas that special something, setting them apart and making them truly stand out. Paraibas have risen incredibly in value due to many factors such as rarity and scarcity, very limited supply, and ever-increasing demand, yet it is mainly its joyful colour that has been responsible for sending its value skyward. No other gem can compare with the Paraiba’s luminous and glowing presence, it is truly the ‘Gem of Gems’.” 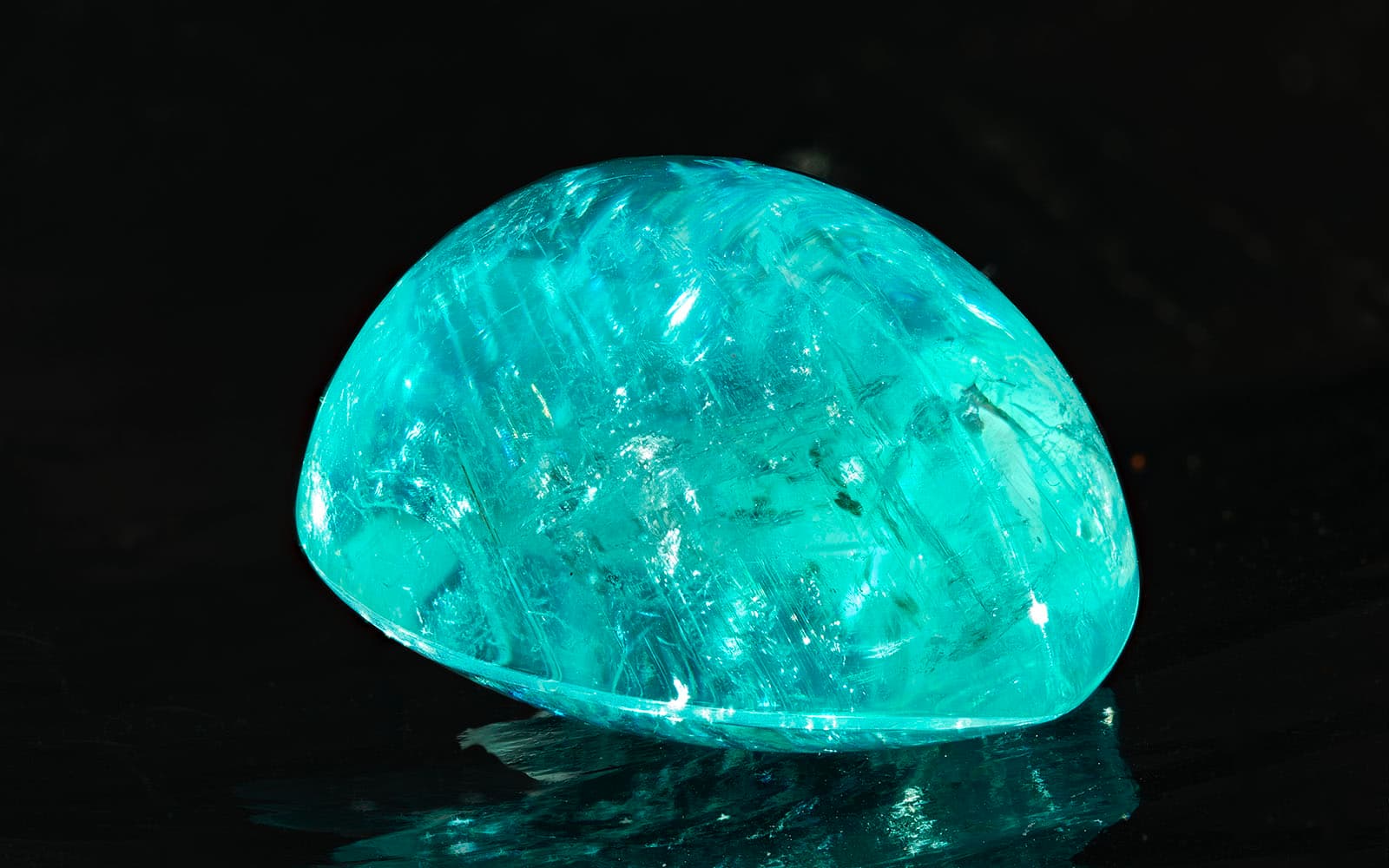 Tourmaline is one of the most colourful gemstones, so it’s not surprising to find another branded colour option for this material (and let’s not forget about indicolite!). Lagoon tourmalines have a blue-green colouring that’s like diving into the ocean off a Caribbean island or snorkelling in the Great Barrier Reef. What’s interesting is that the intense blue shade here is not the result of copper in the tourmaline’s crystal structure, unlike its Paraiba cousin. Isaline Arnoldi, co-founder of GEMHYPE.com, says: “The Lagoon tourmaline has increased in value enormously in recent years. On one hand, this is due to its really special and unique colours, but it is also a kind of substitute for Paraiba tourmalines. After Paraiba tourmaline, the lagoon tourmaline is one of the most expensive varieties of this gemstone.” 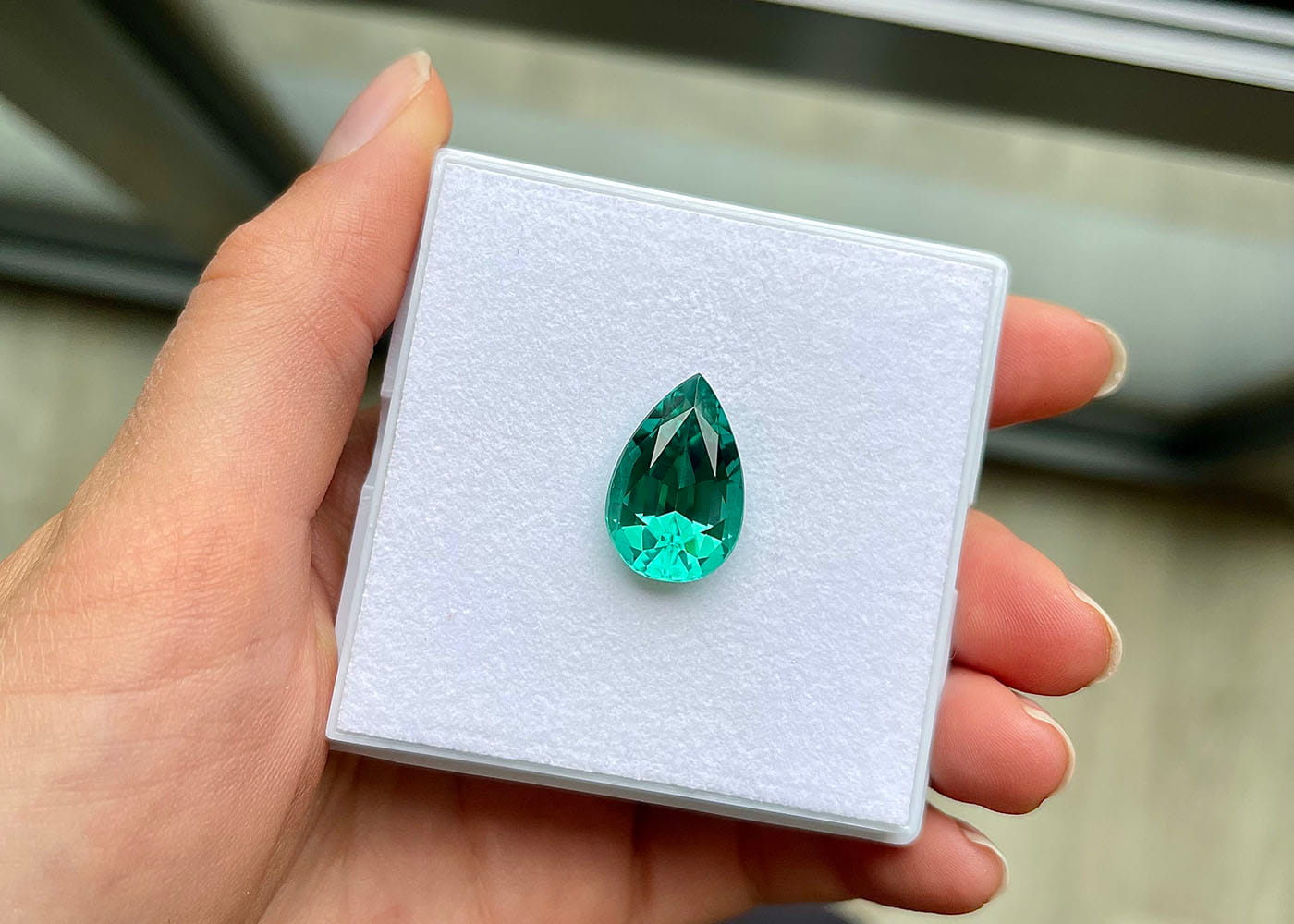 What’s allowed to be called a ‘lagoon’ tourmaline is hard to pin down, but it is typically reserved for the brightest and most saturated blue tourmalines modified by green. A true green or ‘Chrome’ tourmaline has an obvious medium-to-dark green colouration without the interference of blue.

When valuing opals one of the most important factors is play-of-colour – the patterns and shades of colour that dance across the surface of each stone and make it unique. Fire opals are different; the most prized stones have a vivid orange body colour. Plus, this is the only kind of opal that can be transparent to translucent, which is why they are sometimes faceted rather than cut as cabochons. According to the American Gem Trade Association: “The fire opal was prized by Mayan and Aztec peoples, who called it “quetzalitzlipyollitli” or, “the stone of the bird of paradise.” 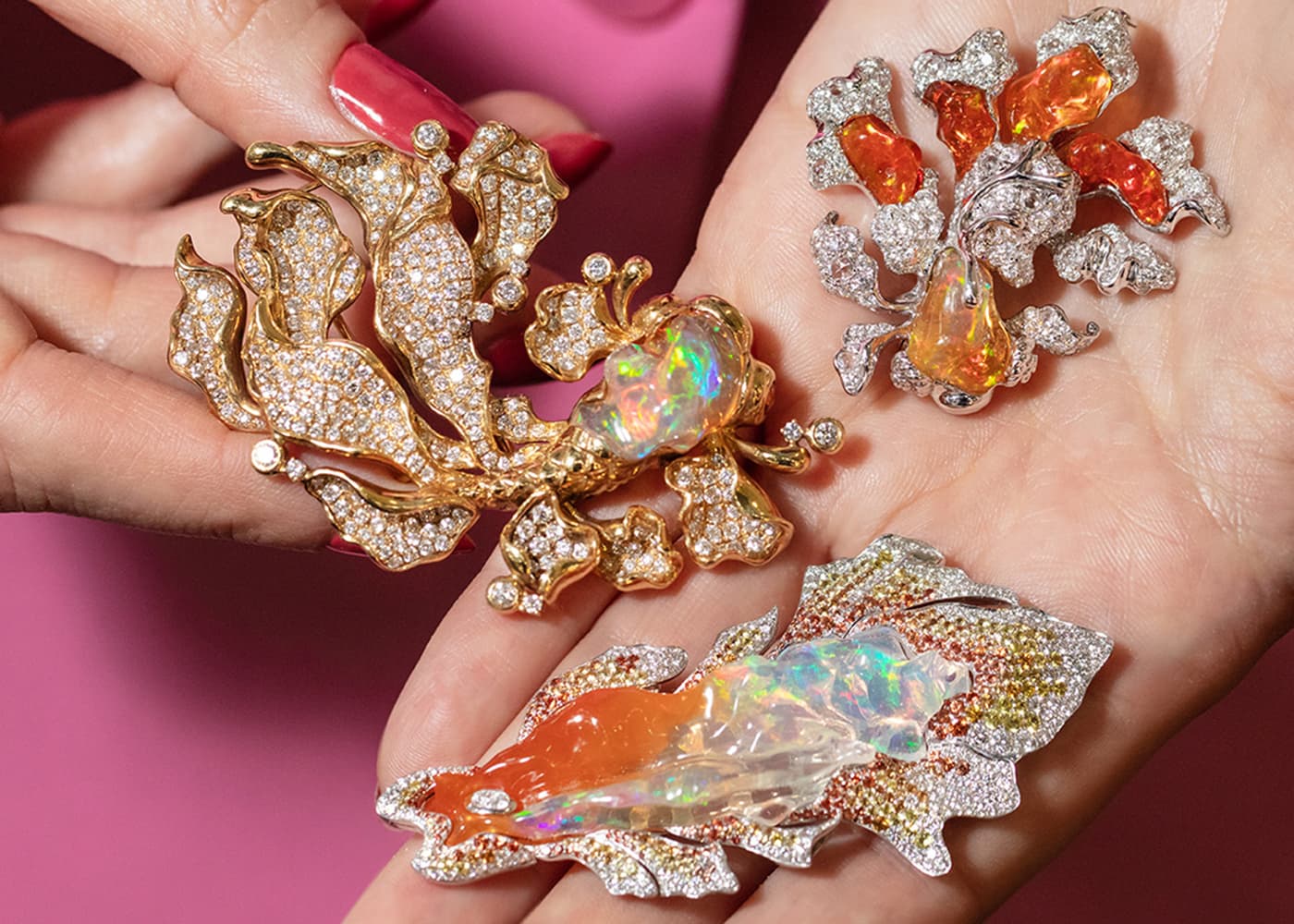 Tanja Schütz of Emil Weis Opals tells me: “The orange body colour of the fire opal is caused by traces of iron. We know of two types of fire opal: the ones with no play-of-colour that are sometimes clear enough to be facetted and the ones with play-of-colour which are normally cut into cabochons. The facetted material is mainly mined in Mexico and Brazil, minor sources are Turkey, the US and recently Western Australia. The play-of-colour material is predominantly mined in Mexico, Ethiopia and Indonesia.” 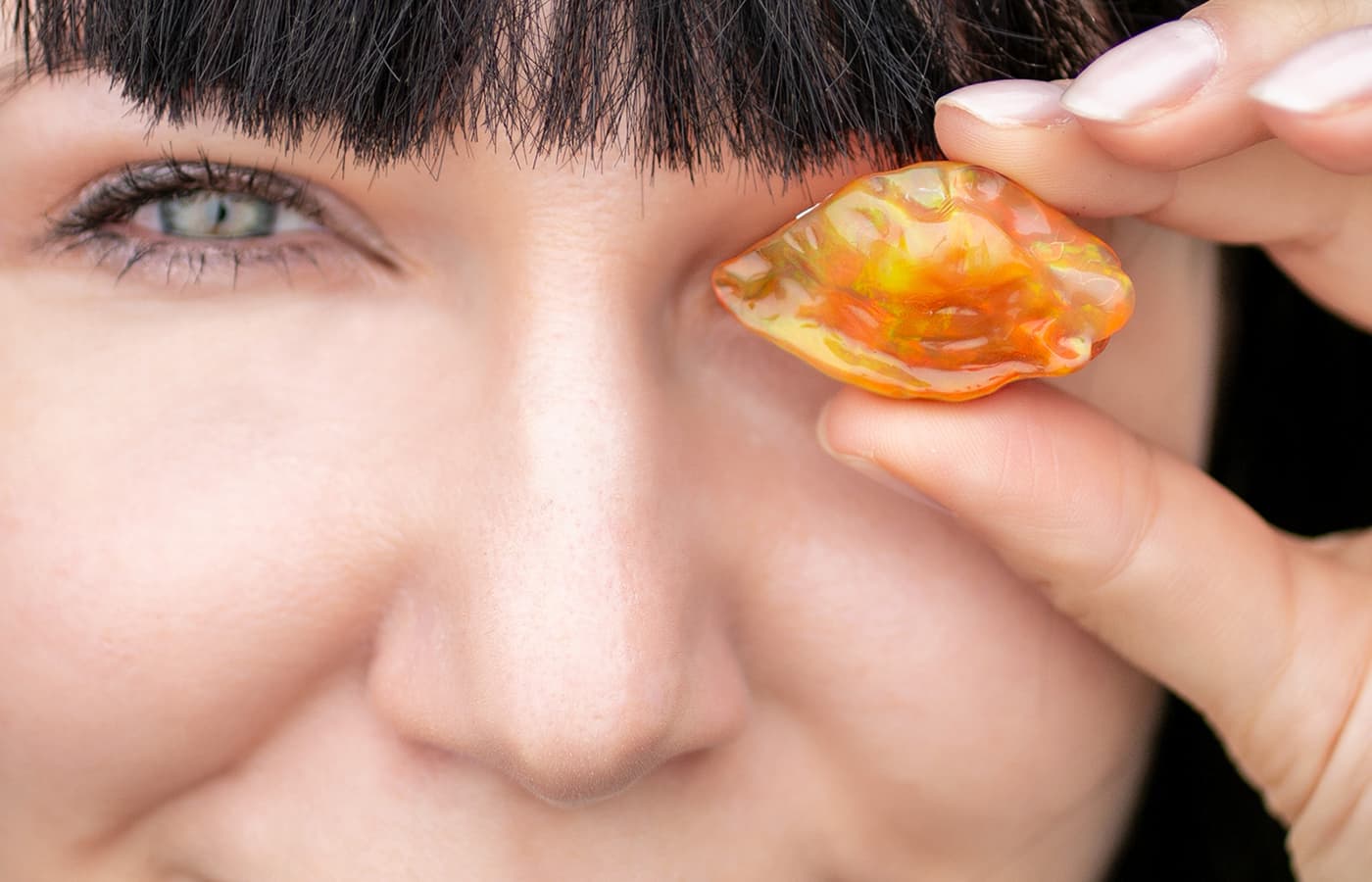 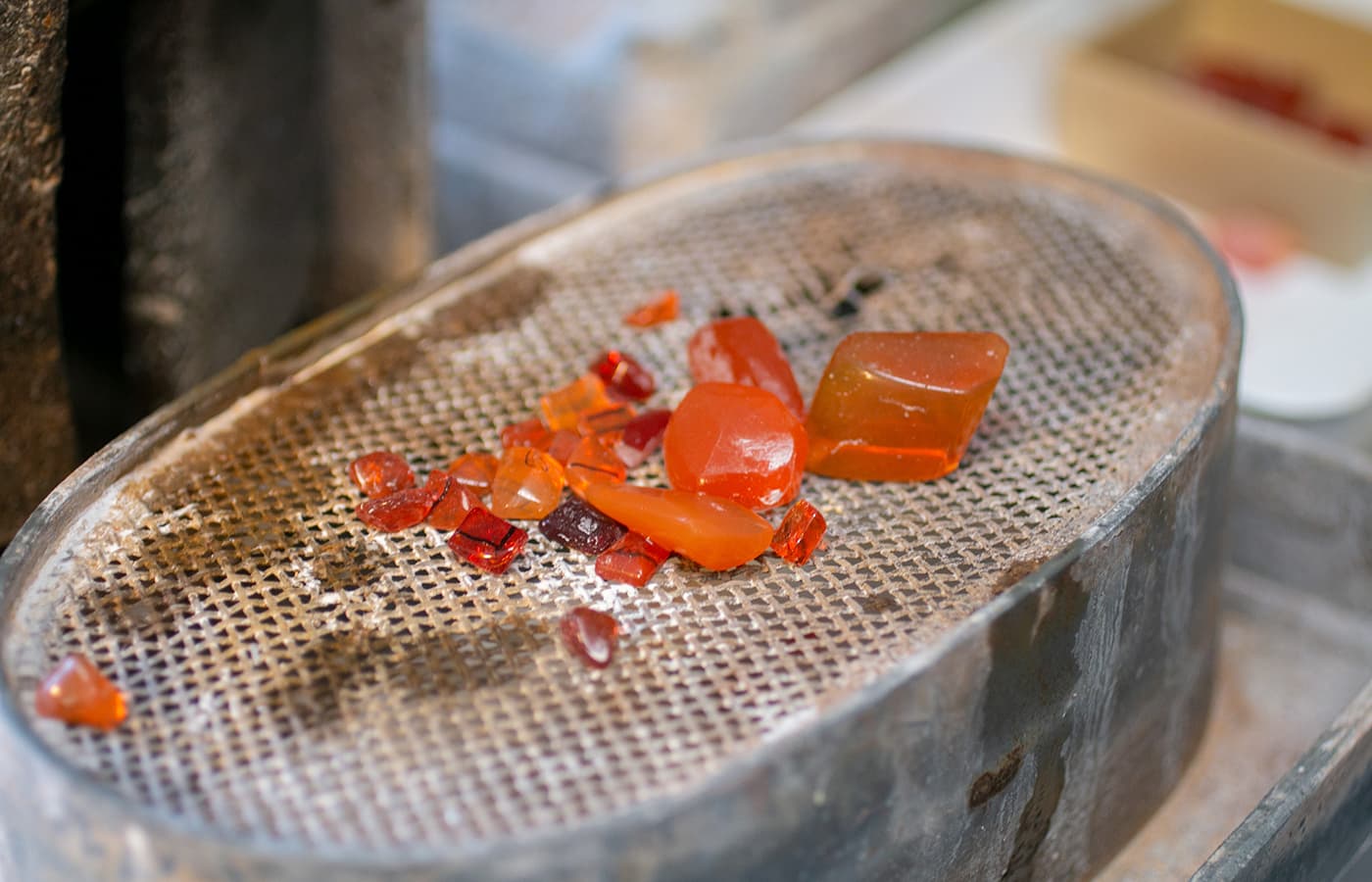 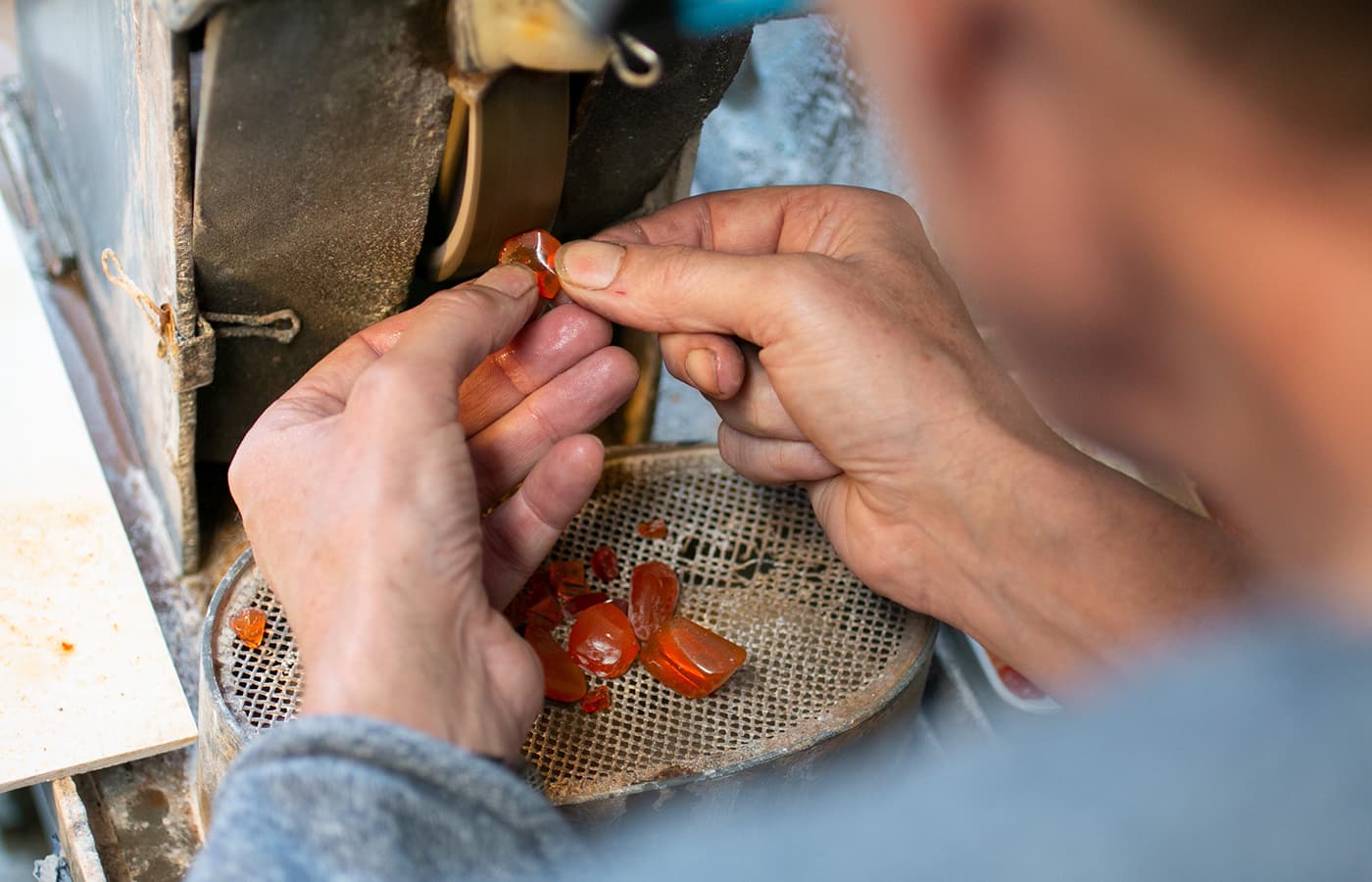 And prices can vary enormously depending upon the quality. For example, according to Schütz, play-of-colour fire opal can vary from US$ 10 to 5,000 per carat, while faceted fire opals can range from US$ 10 to 800!

You may come across other terms, like ‘pine green’ emerald and ‘Jedi’ spinel, but these are less official and not quite so widely recognised. It’s a fine line between a simple descriptive phrase and a true gemstone ‘brand name’. 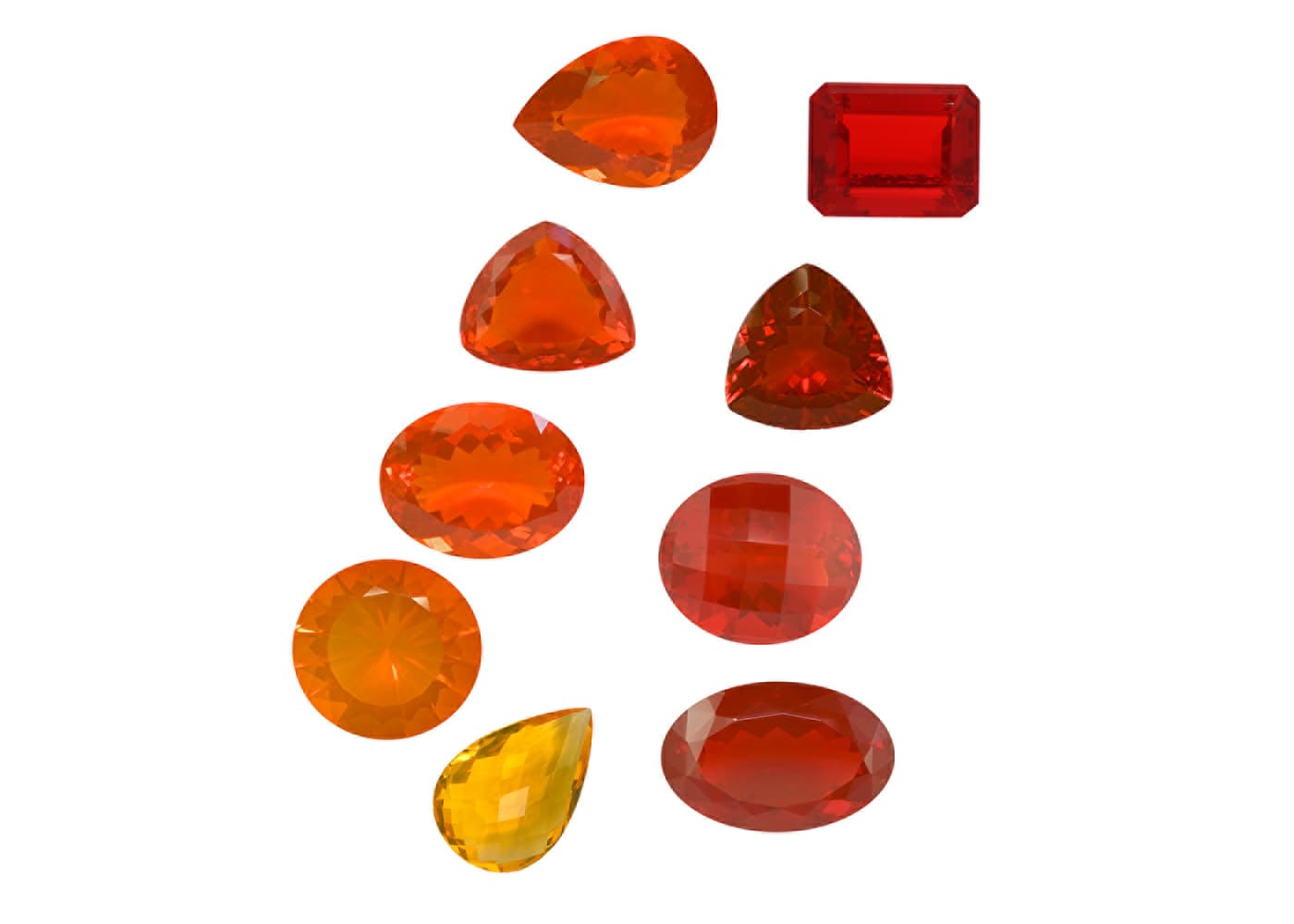 Perhaps something remarkable will be discovered tomorrow and, on instinct, a gem dealer will give it an unusual name. How likely is it that this moniker will be used in 10 years, 20 years or even 100 years’ time? It must be descriptive, commercial, relevant, required and backed up by grading laboratories that can confidently define its specific brand-like qualities. Taking all this into account, it’s a great reminder that the world of gemstones is its own living, breathing and ever-changing organism.