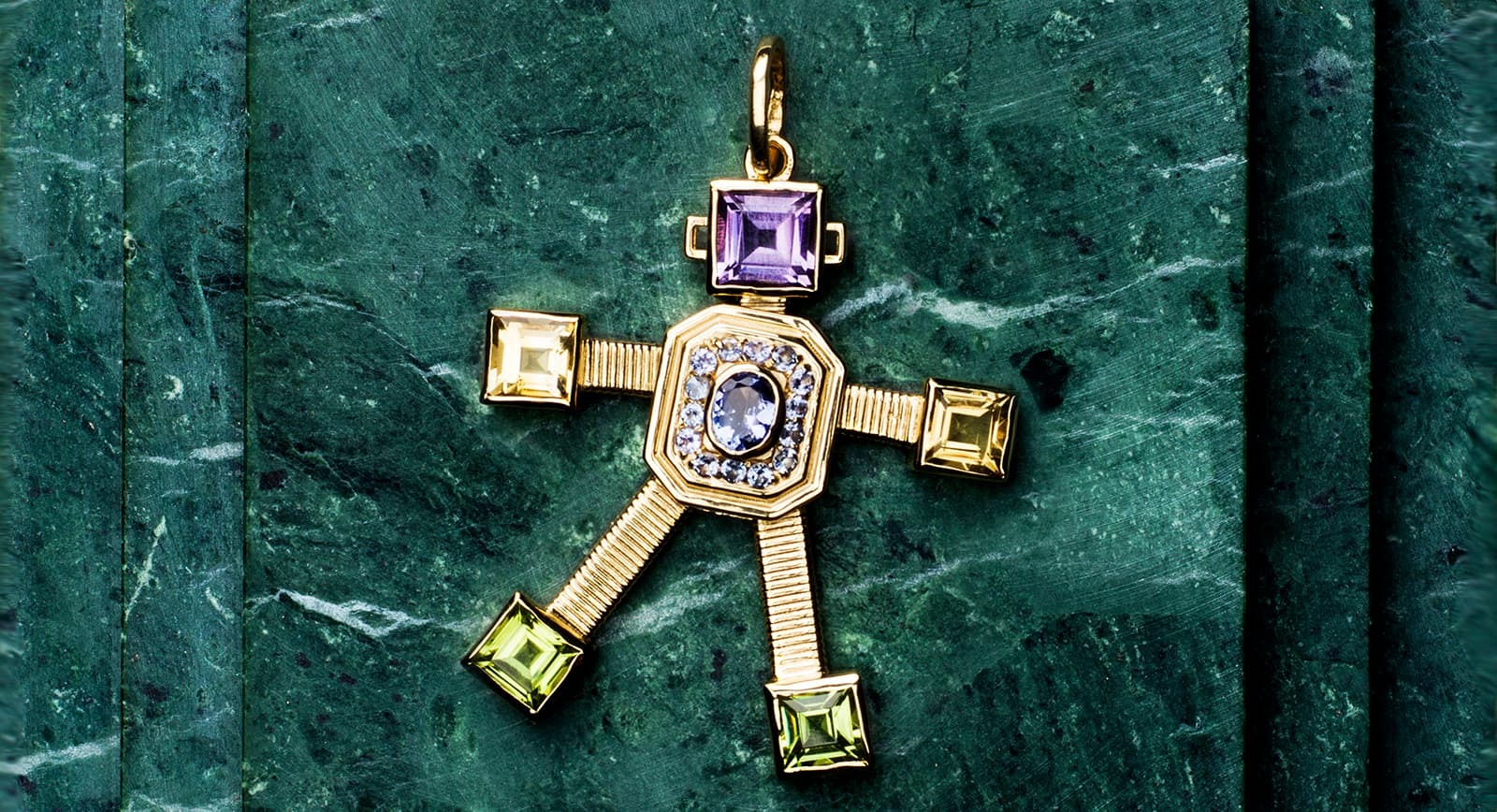 Invasion: The Rise of the Bejewelled Robots

Robots have suddenly burst into our lives. A few decades ago, it was only avid science fiction writers who could have imagined such a turn of events. The main purpose of their creation was to help people with their everyday lives and at work, and to free up time for relaxation and creativity. Recently, however, more and more jewellery designers have seized on another idea for their purpose: to bring joy!

Living in the modern world, we are constantly surrounded by gadgets and technology. They have already become an integral part of our existence. But we are not going to analyse the technical benefits of androids. We are going to talk about their gemstone copies instead, created by jewellers from around the world.

Named after a Chinese mythical animal that symbolises love, Qeelin was founded in Paris in 2004 by Dennis Chan and Guillaume Brochard. It is a jewellery brand that combines Chinese inspiration and French know-how, unbridled creativity and superior craftsmanship, bringing playfulness and unpredictability to a rich cultural context, traditional symbols and classic elegance, imbuing Chinese jewellery art with new life and contemporary relevance. The Roobot pendant collection was inspired by Dennis Chan’s personal collection of vintage articulated robots. But do not jump to conclusions! Despite their retro appearance, these robots are equipped with very complex mechanisms with which they can be controlled. Each of these pieces is made of white or pink gold, inlaid with blue, yellow, pink or orange sapphires, black and colourless diamonds, and rubies. 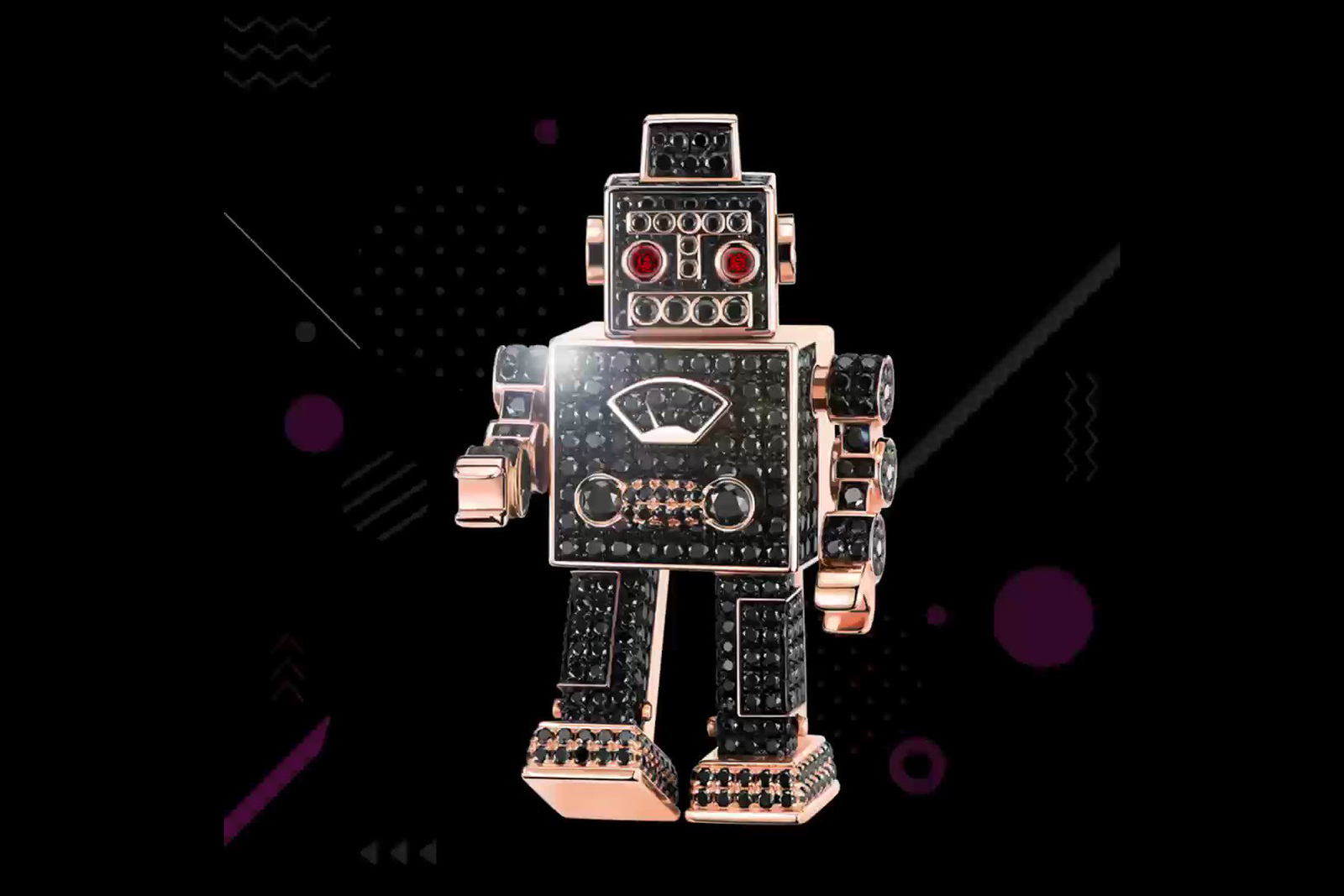 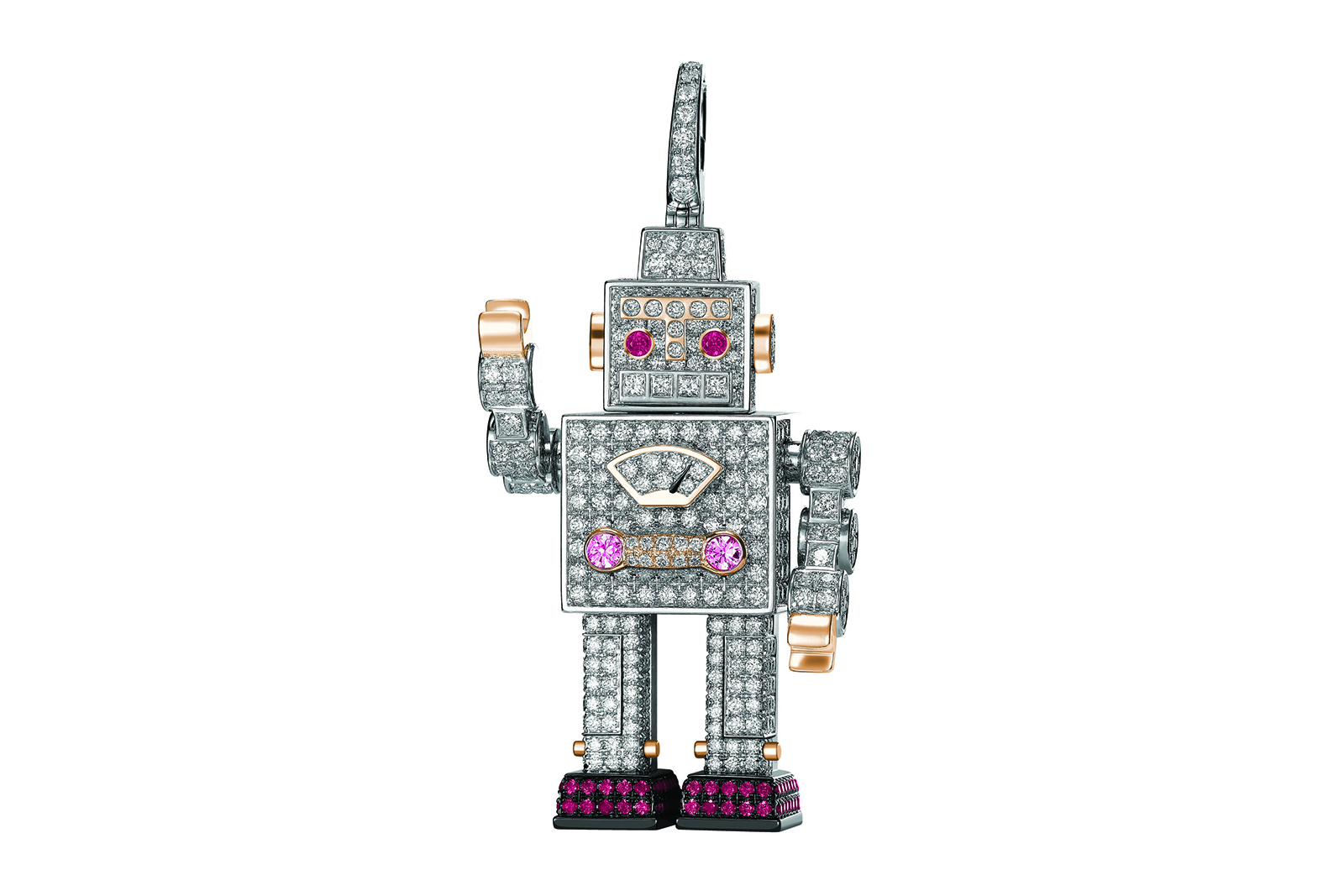 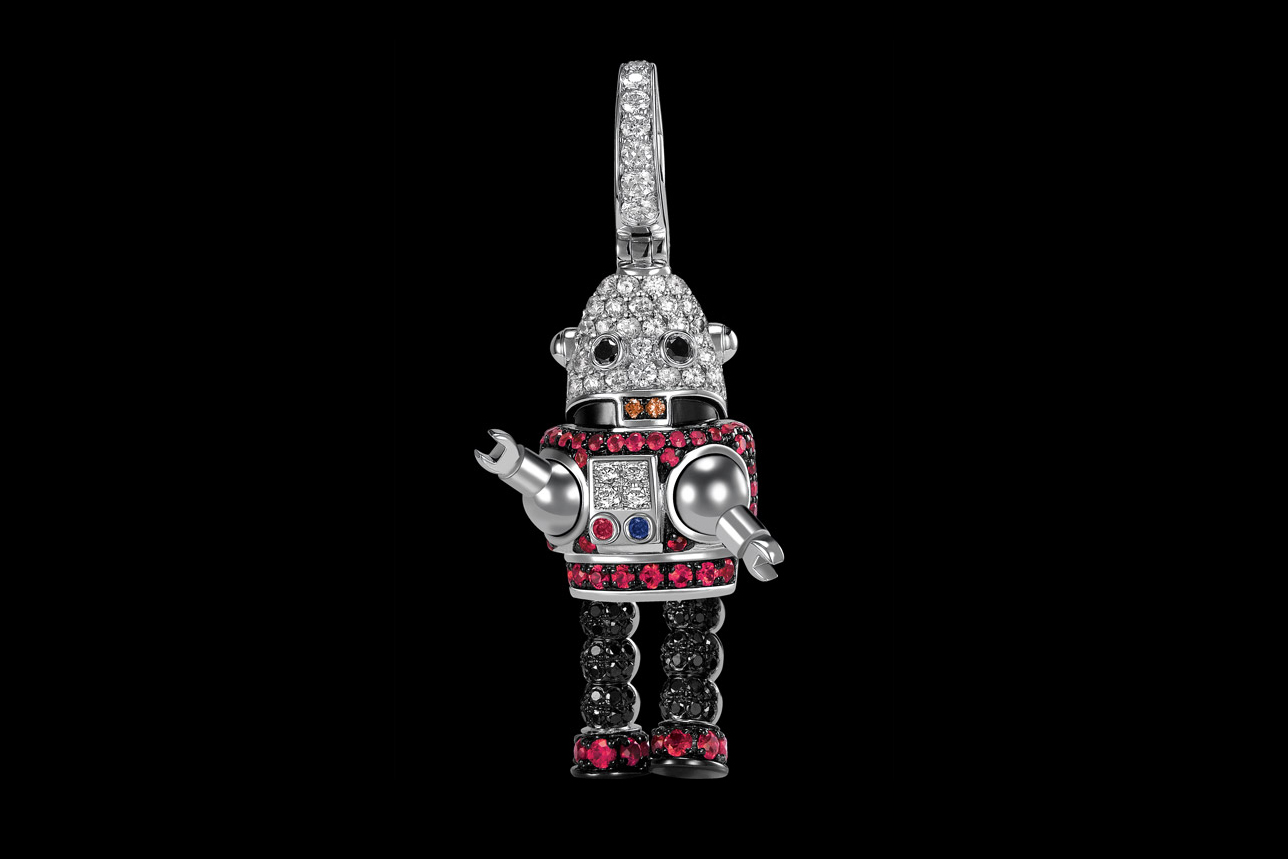 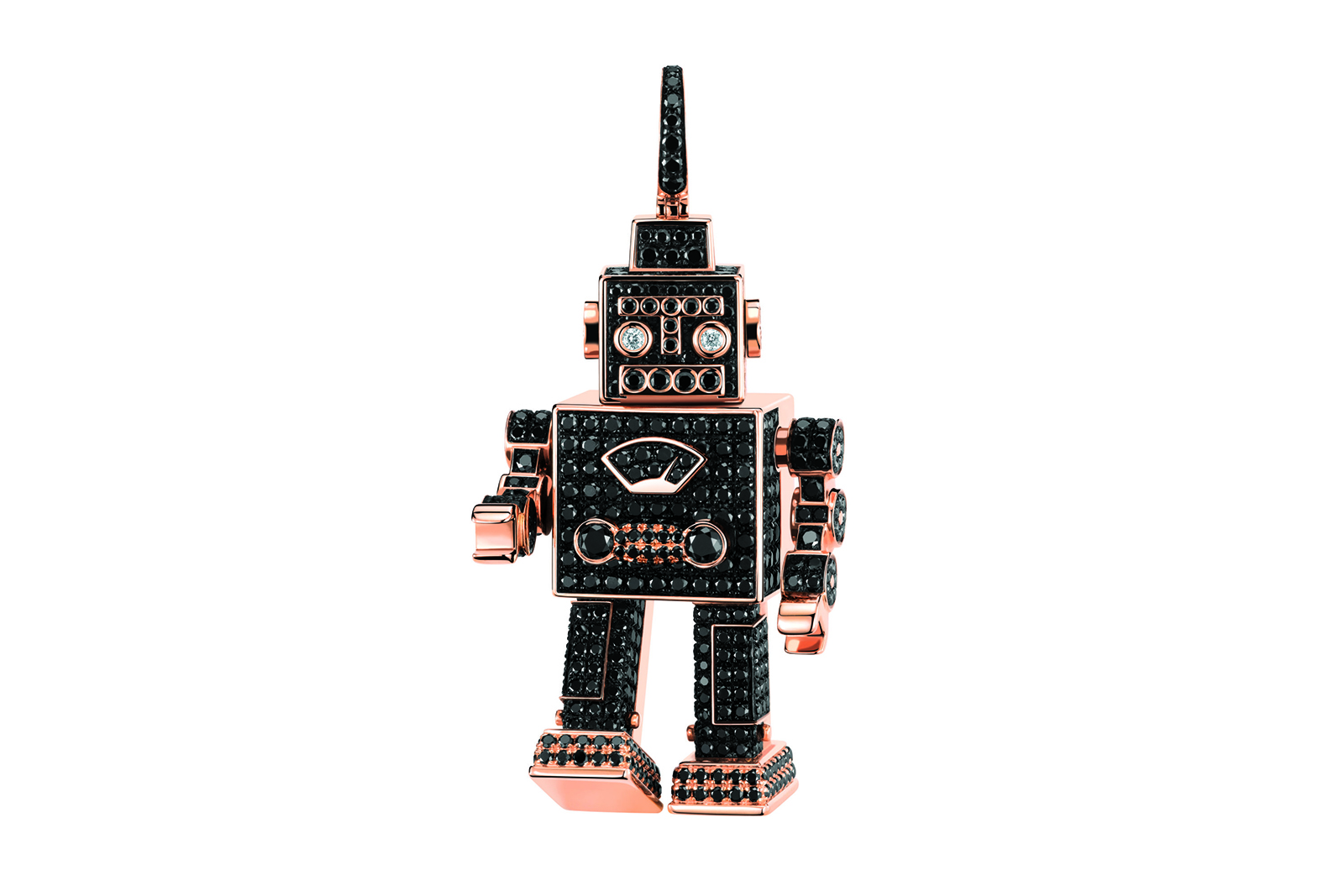 Aenea is a relatively young brand founded in 2013 and located in Salzburg, Austria, the birthplace of Wolfgang Amadeus Mozart and the “home” of many generations of jewellers since the 11th century. Here, techniques from different countries and traditions have been merged to create work that is appreciated by the true connoisseurs of jewellery art. Aenea honours and embraces the heritage of past centuries, but also offers its own vision of jewellery, one that is focused on the spirit, innovation and aesthetics of today. For example, this high jewellery brand has an entire collection of variously themed charms, whose essential purpose is to stimulate the mind, memory, feelings, and to inspire. The designers have infused this popular jewellery accessory with a very profound idea: they believe that random chance events can set in motion an invisible chain of reactions that will definitely lead to success! A theme for two of the types of charms was robots which have movable limbs and a semi-precious body. Fabulous idea! 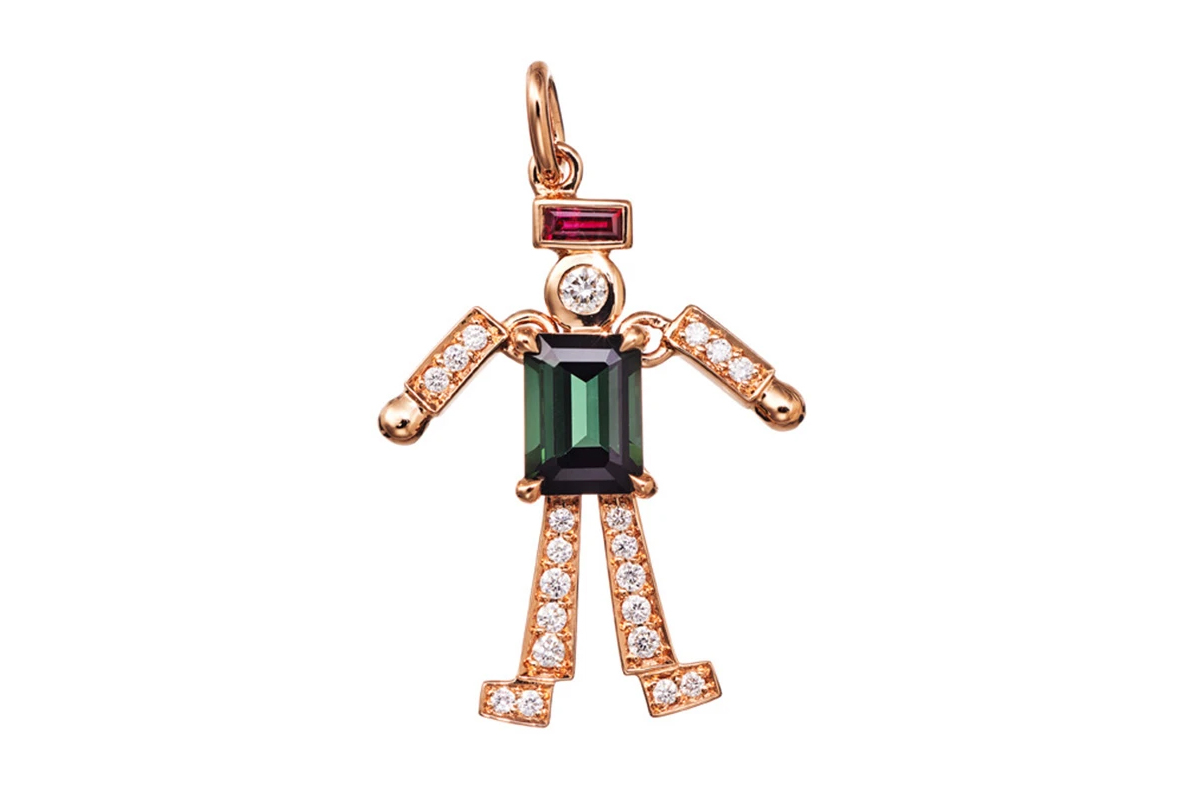 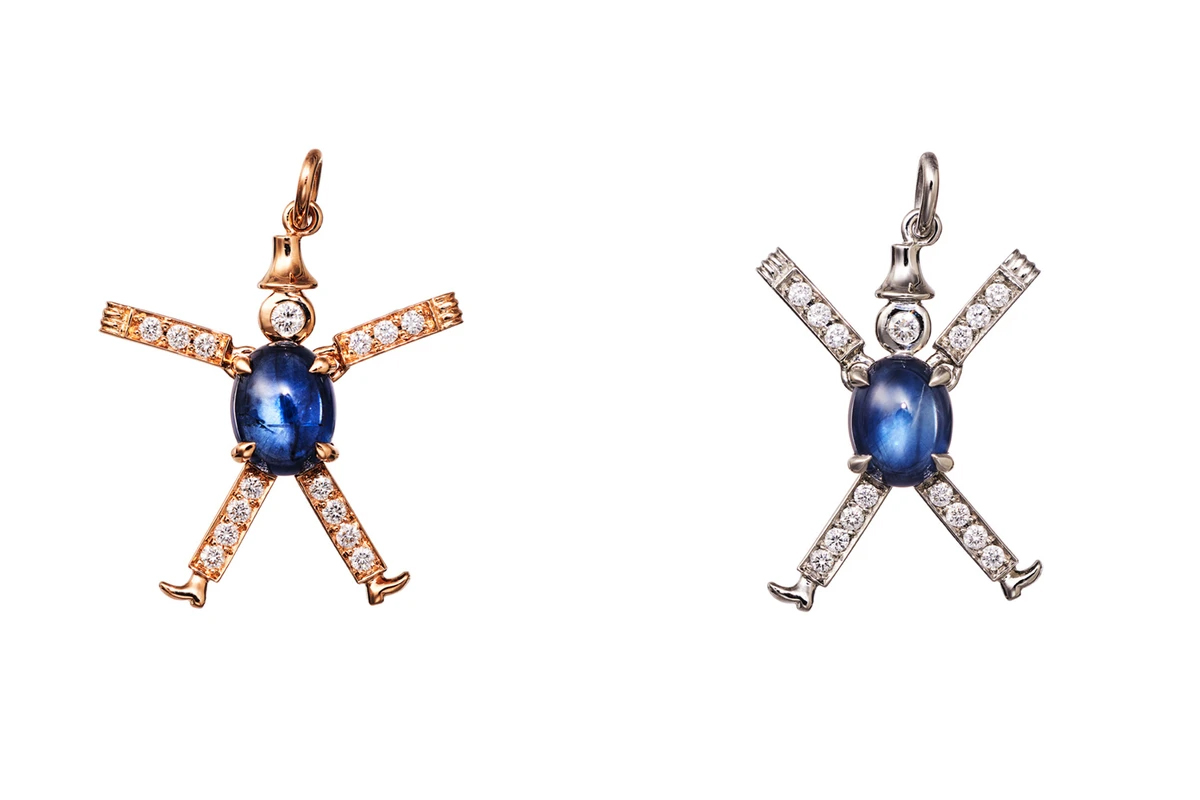 VAN’s starter collection consists of four robotic pendants: Pinky, Smeraldo, Roma and Amore, crafted from 18K gold and precious stones. Frivolous at first glance, these pendants are handmade by craftsmen in Tuscany, where the Van Lanker family lives. Geometric, almost architectural forms are characterised by mobility: the legs and arms of precious robots move in the same way as their toy counterparts. “I am passionate about Art Deco jewellery but have always followed modern design trends, dreaming of combining both in jewellery that can continue to be relevant today. I have also always loved robots; they represent the past and the future in a playful way so I created VAN ROBOTS as an unexpected, charming embodiment of art deco and science fiction. Who doesn’t love a jolly robot!” the founder of the brand, Tatyana Van Lanker, explains, discussing her idea to create articulated products that are distinguished by playfulness, tactility, originality, in addition to quality and style. 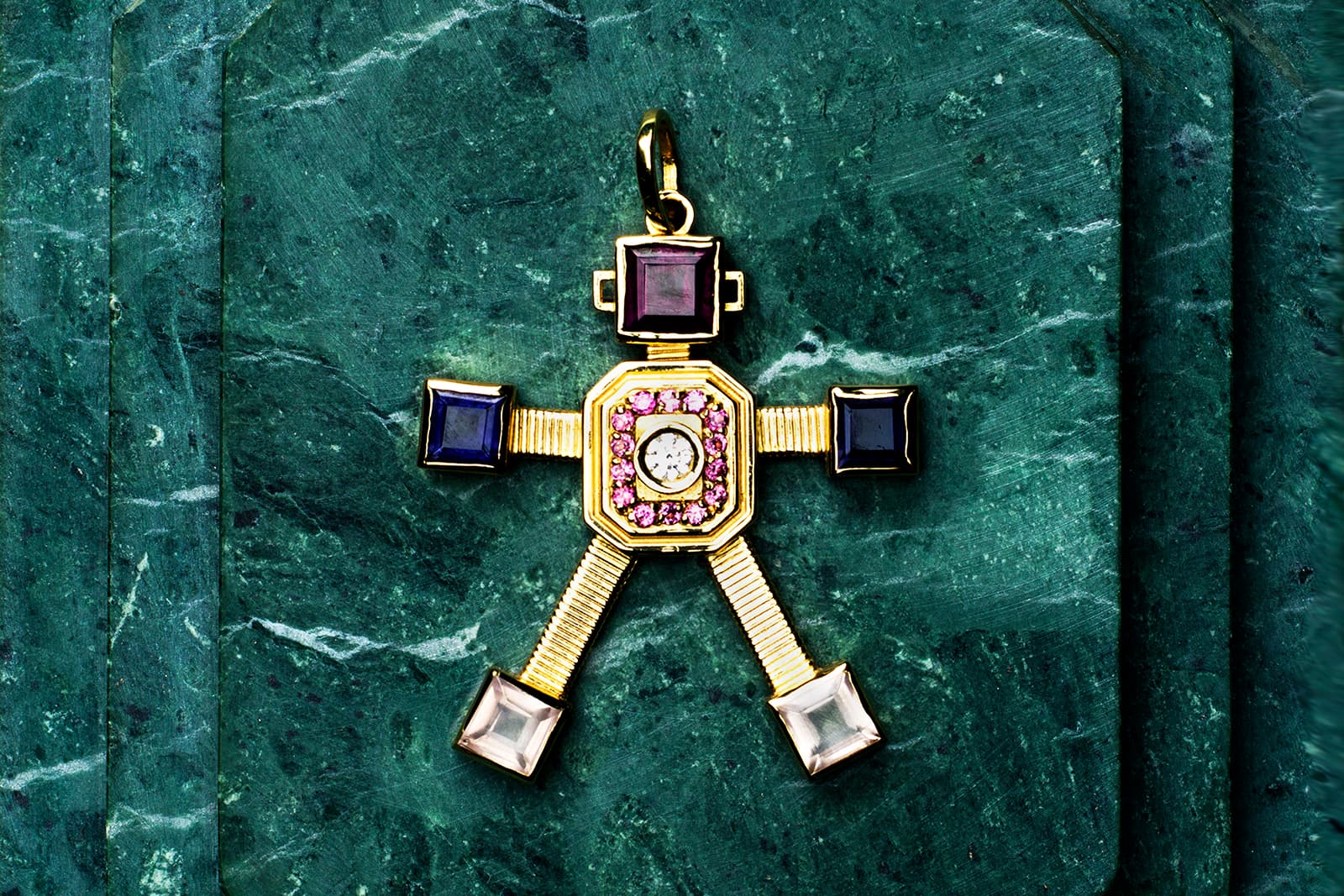 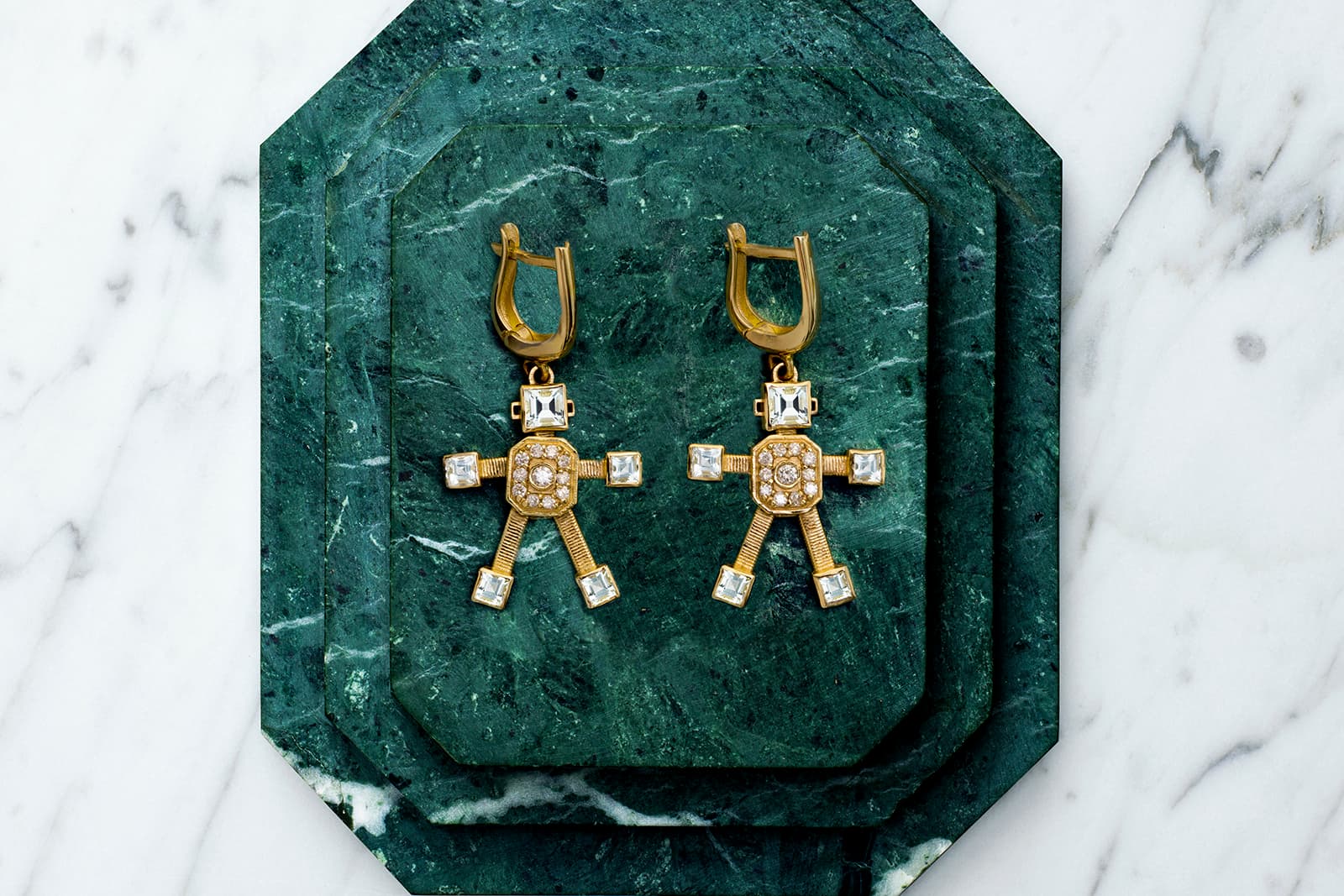 As a child, Max interacted with not one, not two, not even three robots. His father collected them, so all kinds of robotic toys, starting from those made in the mid-50s, were up on the shelf. “I think when they were produced it was difficult to imagine how important robotics would be in today’s society. “These toys were of course what initially inspired my passion for the robots that I create in my jewellery today,” Max explains. He enjoys comparing the human brain to the advanced robots in modern society and imagining how things will look 30 years from now. The designer opts for a retro style and minimalism, focusing intently on the central concept of his jewellery. For example, the “Robot and the unlucky Stone” ring depicts a robot that knocks on a fragile opal because that is its target. He does not question the action or complain about it. The ring is a playful nod to the fact that many jewellers are wary of including opals their jewellery. They tend to shatter when the metal hits the stone, and this is one of the reasons why opals are called “losers’ stones.” Evidently this is not an issue for the robot sitting at the top of the ring... 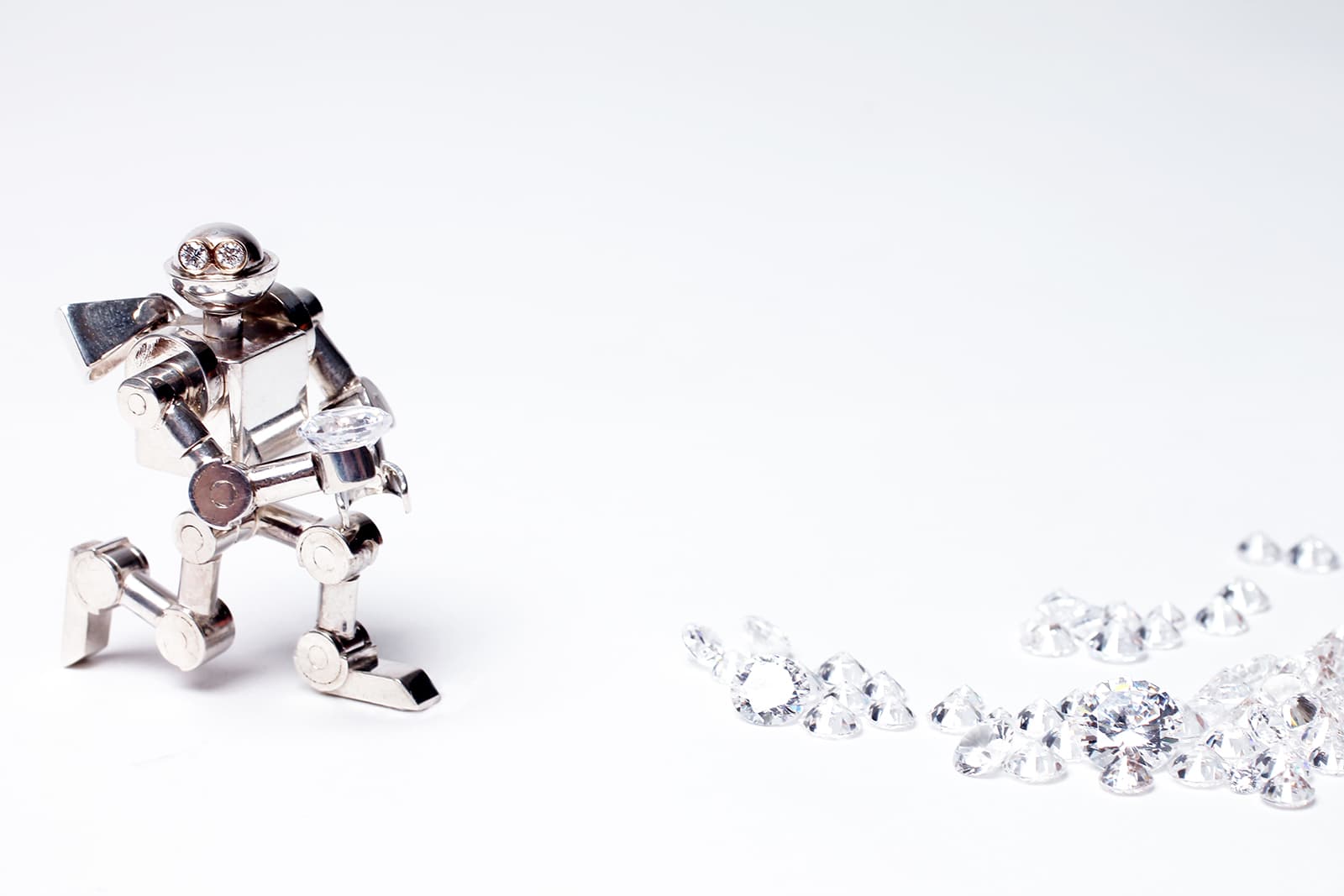 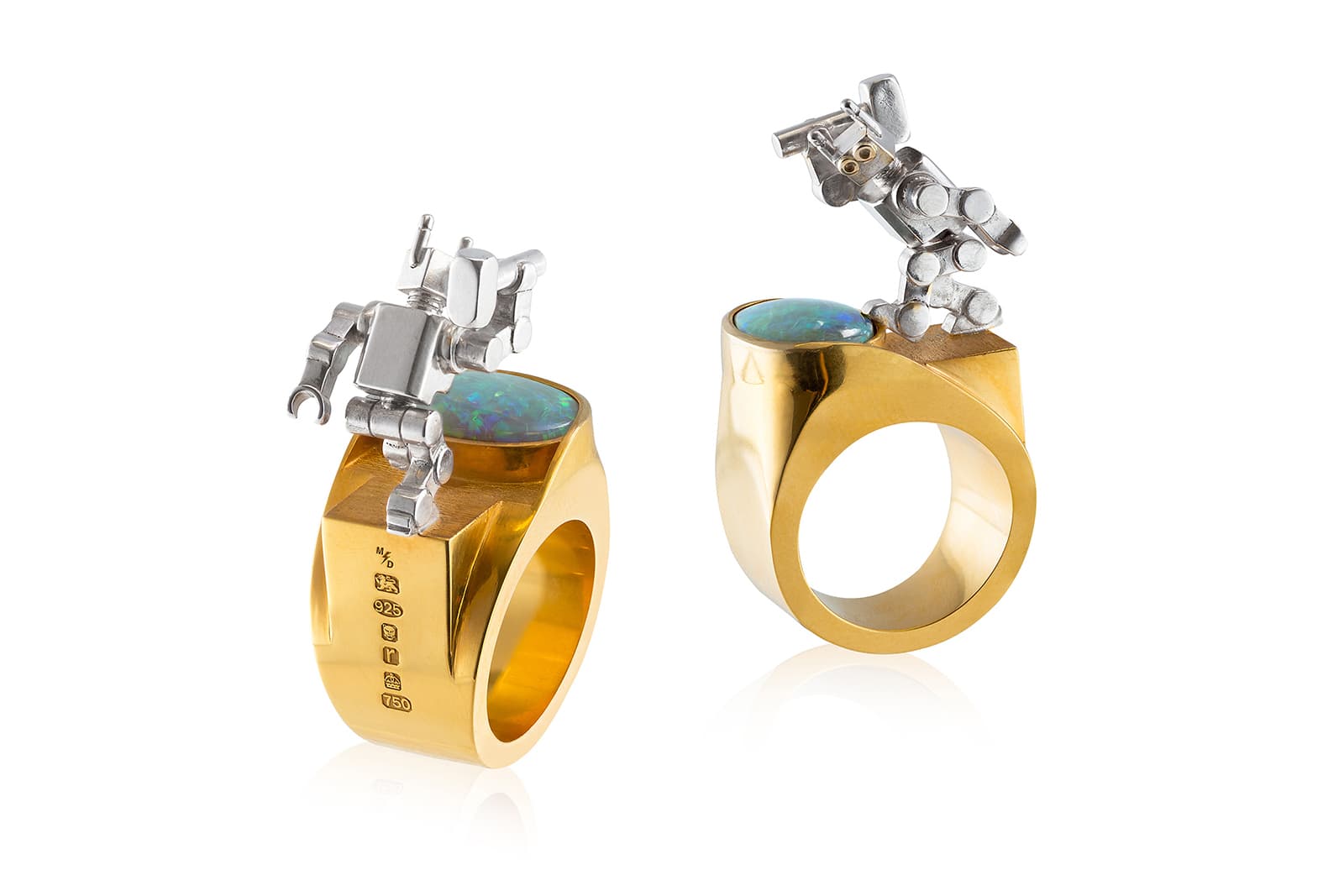 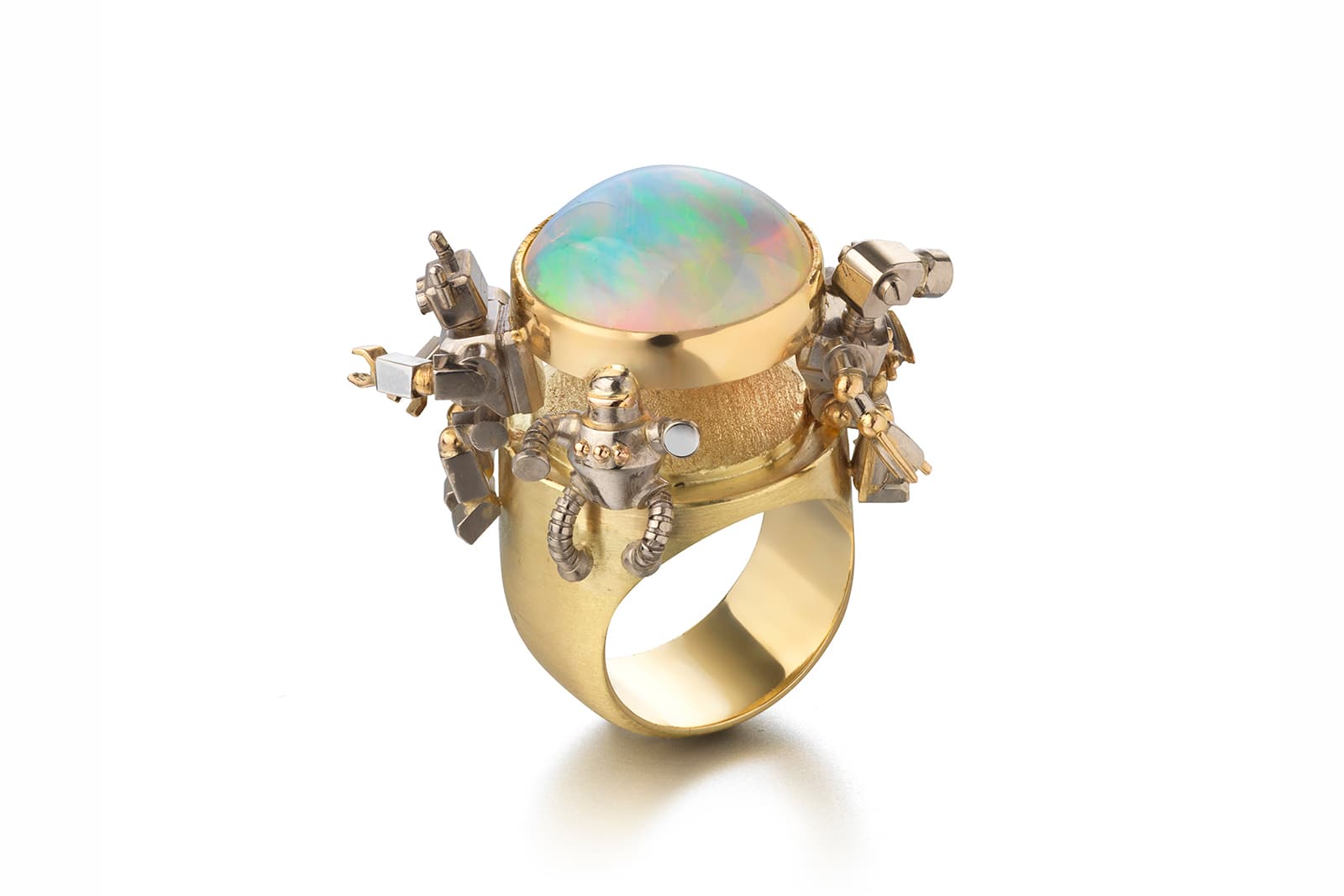 The French fashion maison Louis Vuitton needs no introduction and has been operating for decades. But, like its younger colleagues, it remains open to experimentation, humour and a new generation! At various times, entire “collections” of handmade sportswear and equipment have been released: a table tennis set, a golf set, a surfboard, a football table and even a billiard table! You probably remember their charming line of modern bejewelled headphones too. After reading this, I don’t think you will be surprised that their existing arsenal also has room for the Louis Vuitton Space Man Sapphire Diamond Gold Charm Pendant necklace, released in a limited edition. The robot astronaut is made of white gold with pink, yellow and purple diamonds weighing approximately 1.35 carats. This colourful astronaut can move his arms and legs and is 1.10 inches tall. 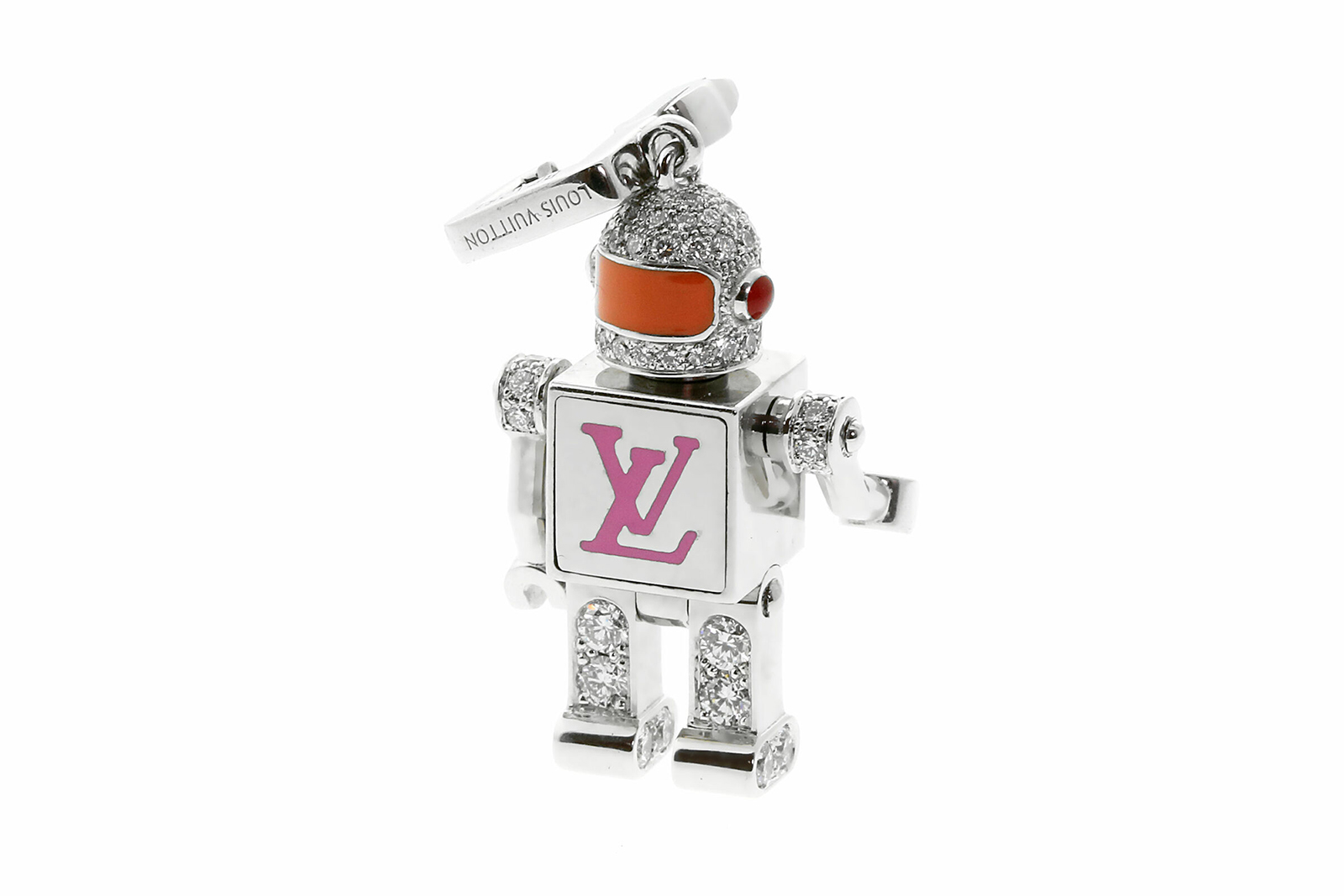 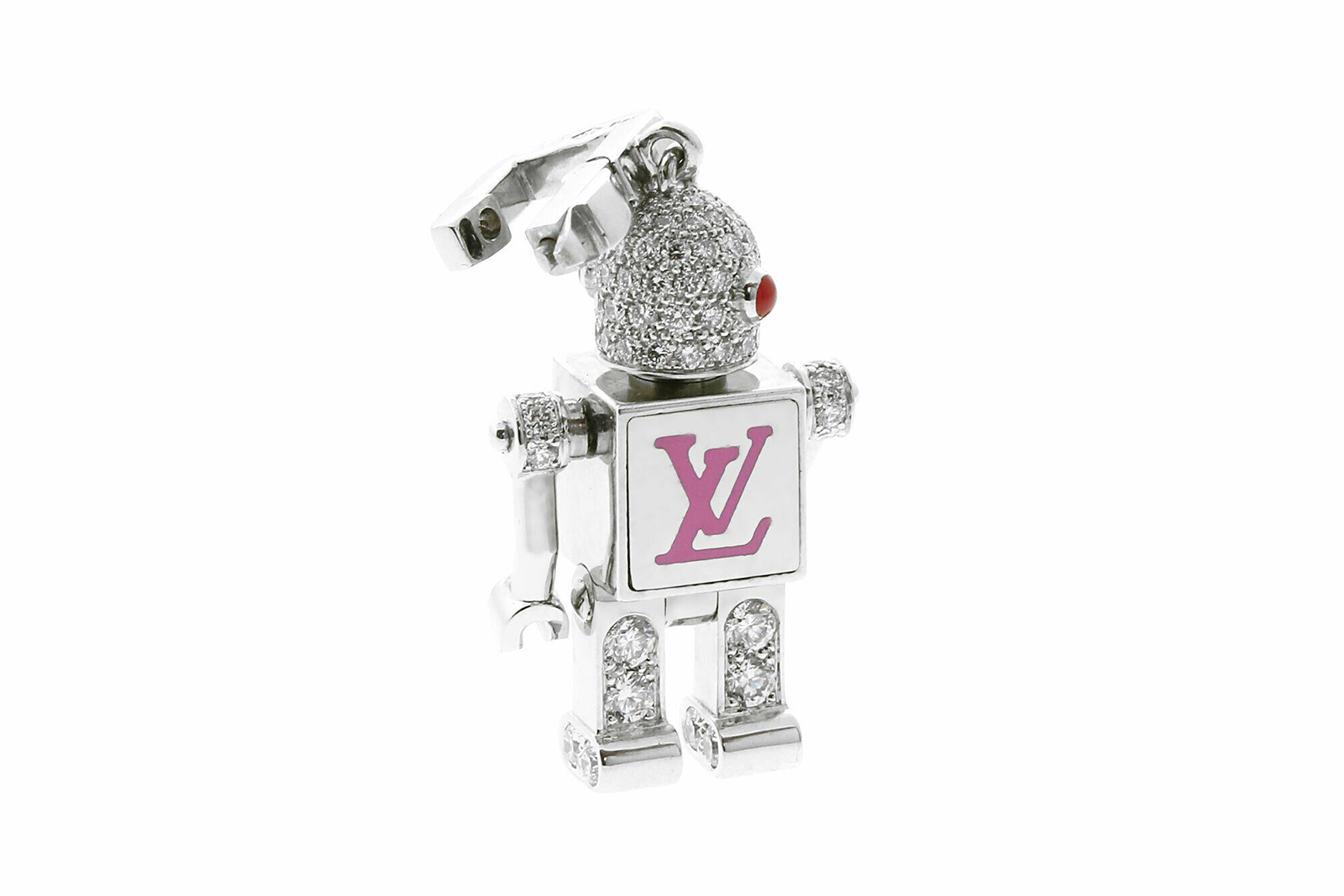 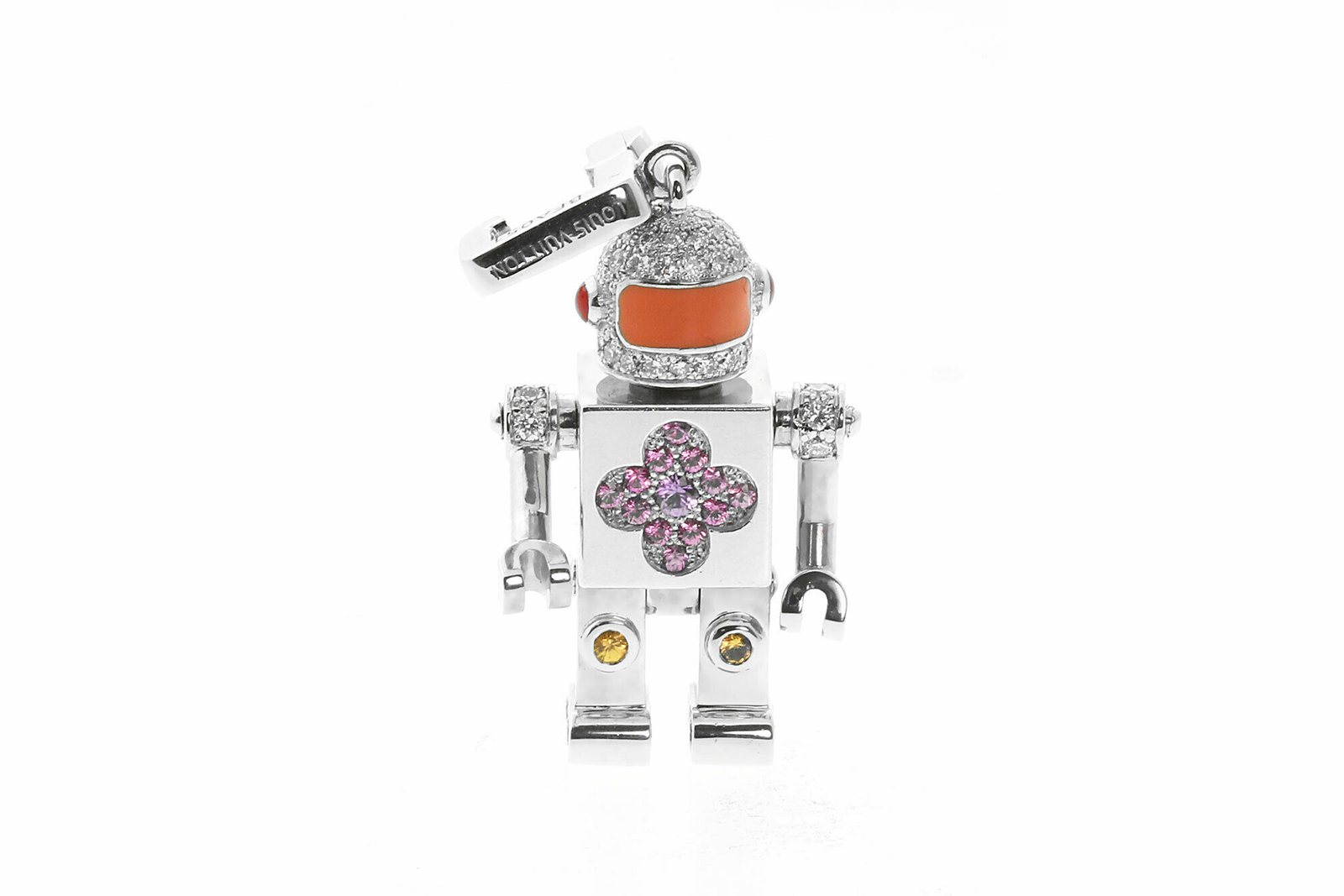 I think the jewellers had a lot of fun making these pieces! What a terrific way to feel like a carefree child again.