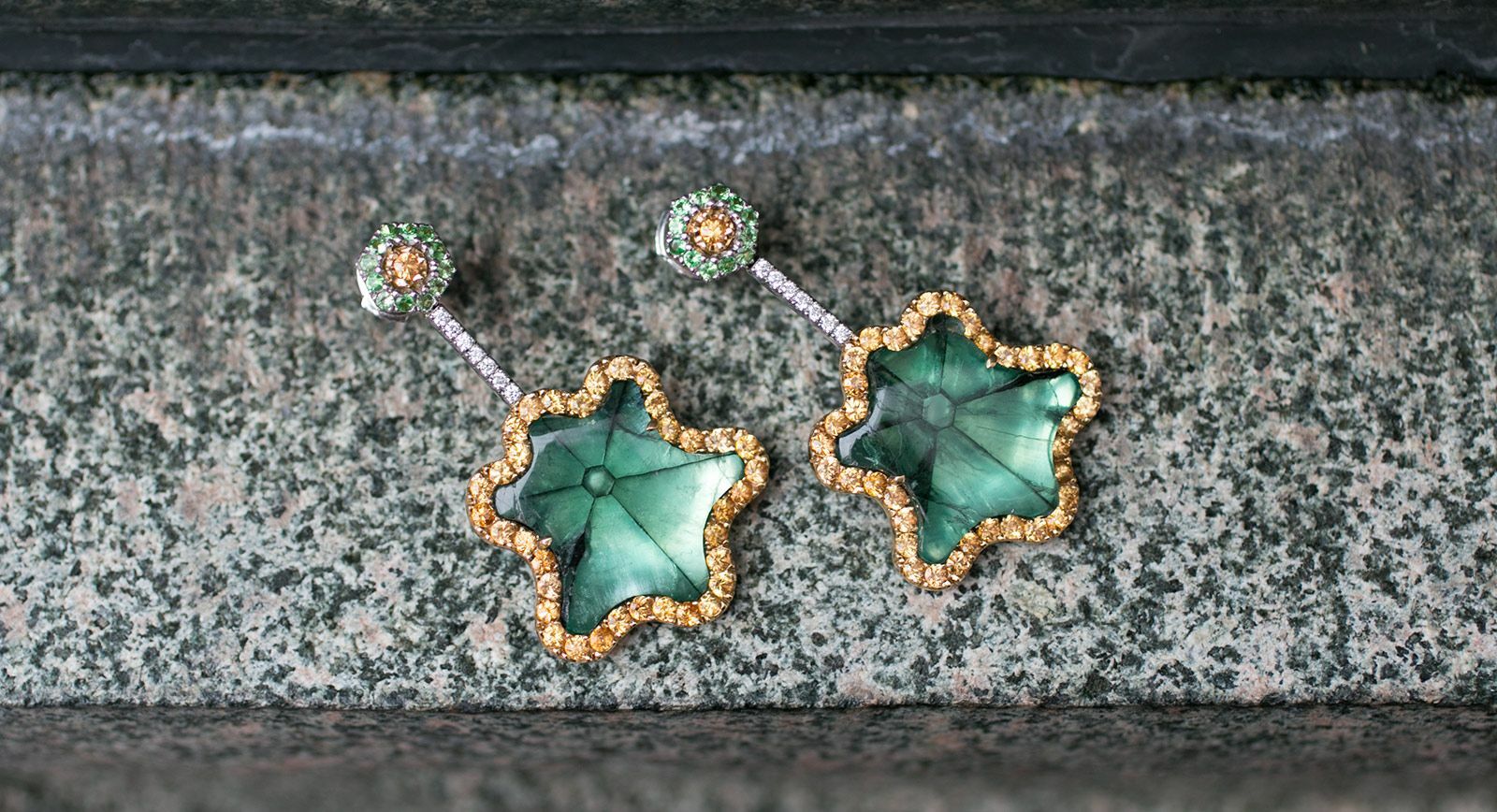 Have you ever heard of trapiche emeralds? Probably not, as being relatively rare natural phenomena, it is only really gemmologists, gem collectors and jewellery aficionados that know about them. They mostly tend to appear in custom-made pieces created by private jewellers rather than in collections displayed in boutique showcases. So why have I decided to touch on the topic of this rare gemstone? The answer is simple: exclusive one-of-a-kind pieces featuring rare gems now generate a lot of interest from affluent clients.

The trapiche emerald is an exceptional specimen from the beryl family that, at first glance, looks like an 'ugly duckling'. Its green crystals are characterised by radial streaks of black that run from the centre outwards, something which has caused people to associate the stones with the iron grinding wheels that were used in South American sugar mills. This is in fact where the name 'trapiche' comes from, which in Spanish means 'sugar mill'. 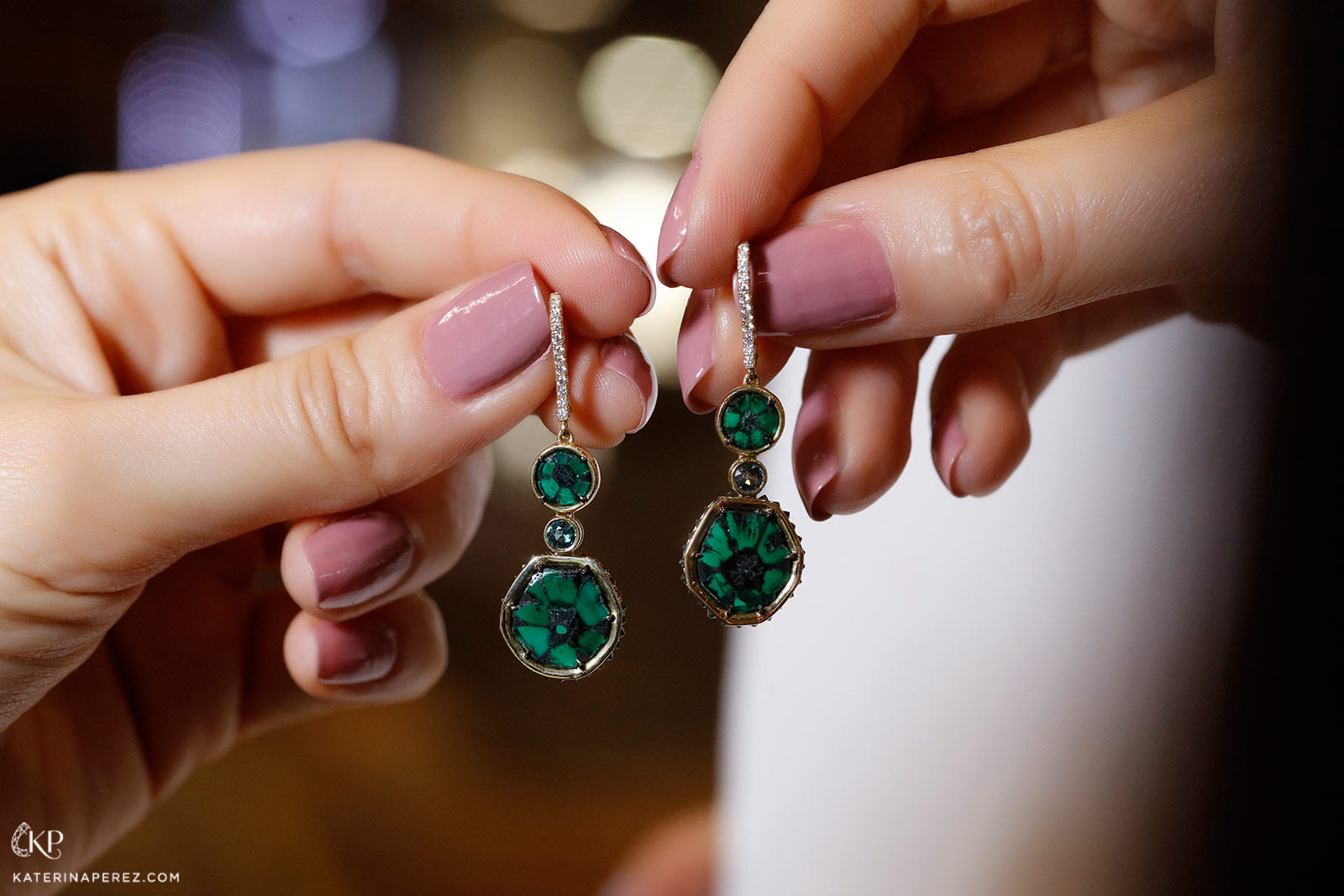 Trapiche’s remarkable appearance, with the unusual composition of the star-shaped inclusion, is the signature characteristic of these emeralds and makes them particularly attractive to jewellery designers as well as potential owners. The exoticism of the impurities is this rare gemstone’s selling point, and, in the hands of jewellers, the stones are transformed into 'beautiful swans'.

Trapiche emeralds are usually cut into discs, allowing light to shine through them and highlighting their unique decorative feature to the greatest effect. Generally, this is the starting point for many jewellers when creating stunning pieces that feature the stone. 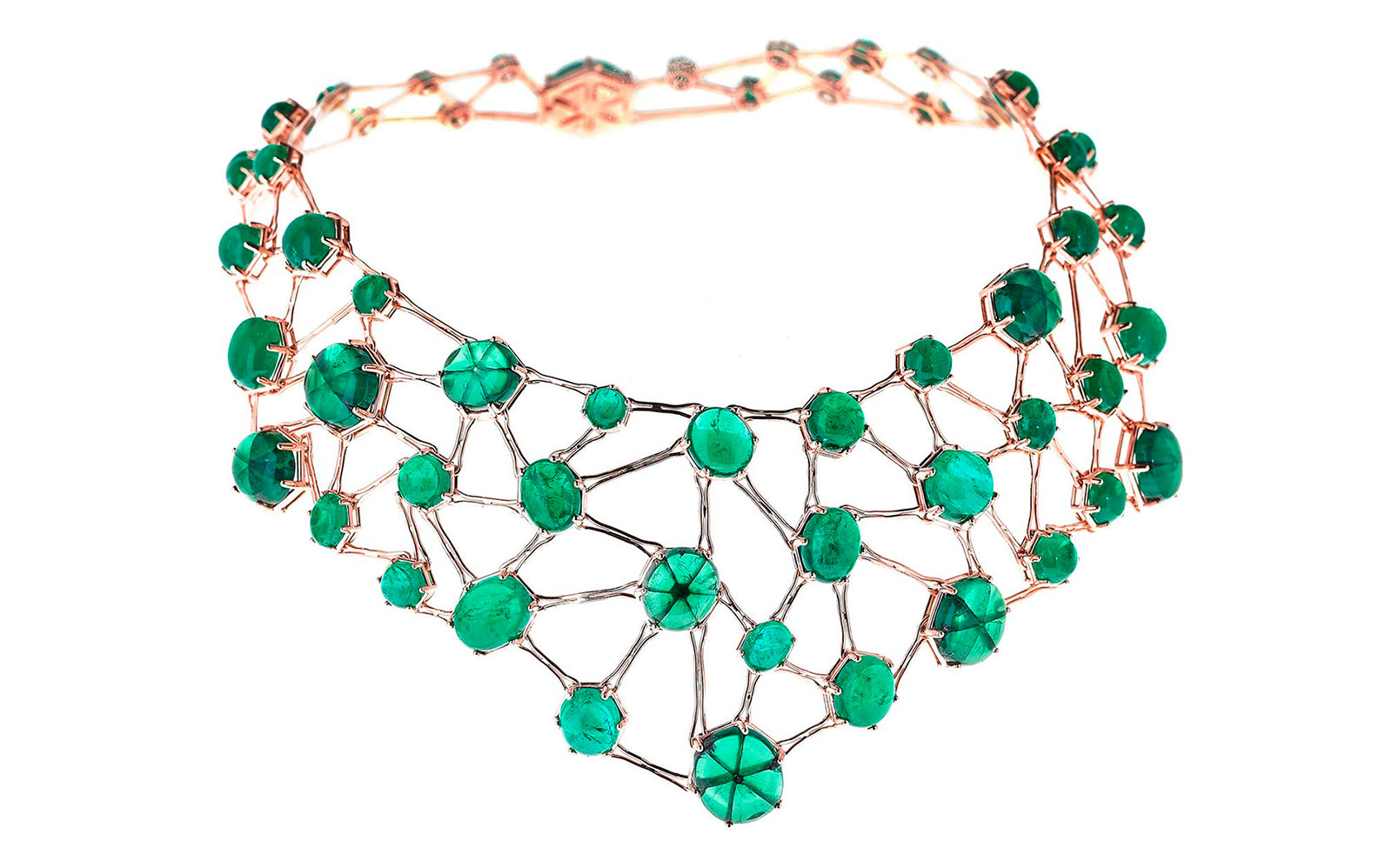 Think of the 'Amal' necklace by Selim Mouzannar from the 'Transparency' collection: the stones are set in such a way that the gold rays radiate in all directions, becoming a continuation of the black 'spokes'. This elegant jewellery neckpiece is made with yellow gold and 47 emeralds extracted from the mines of Muzo. Selim collected eight particularly rare trapiche emeralds for the necklace over the course of several years. The inimitable design and gemstones won the Lebanese jeweller the best in 'Colored Gemstones Above $20K' award at the 2016 Couture Design Awards. 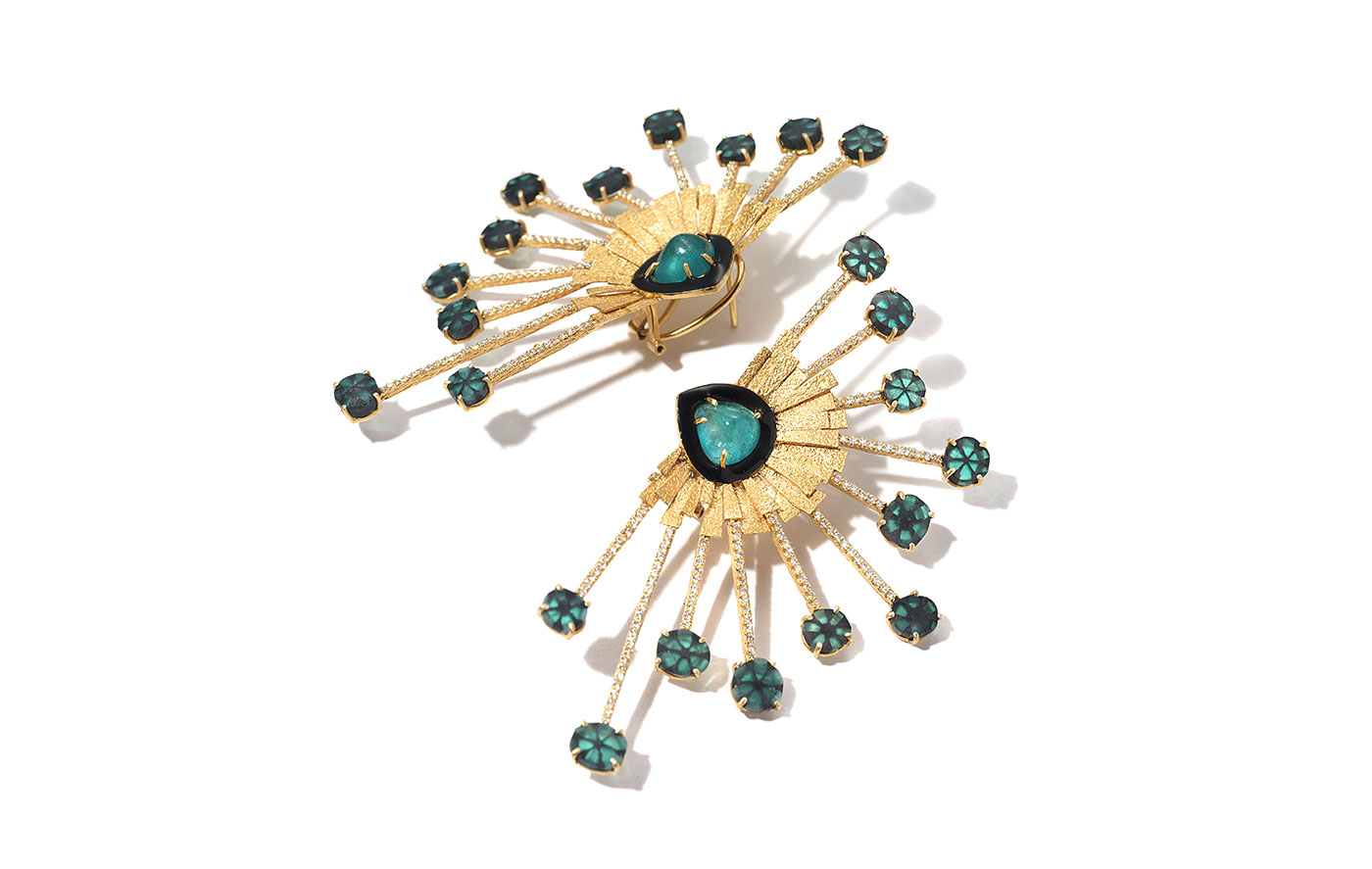 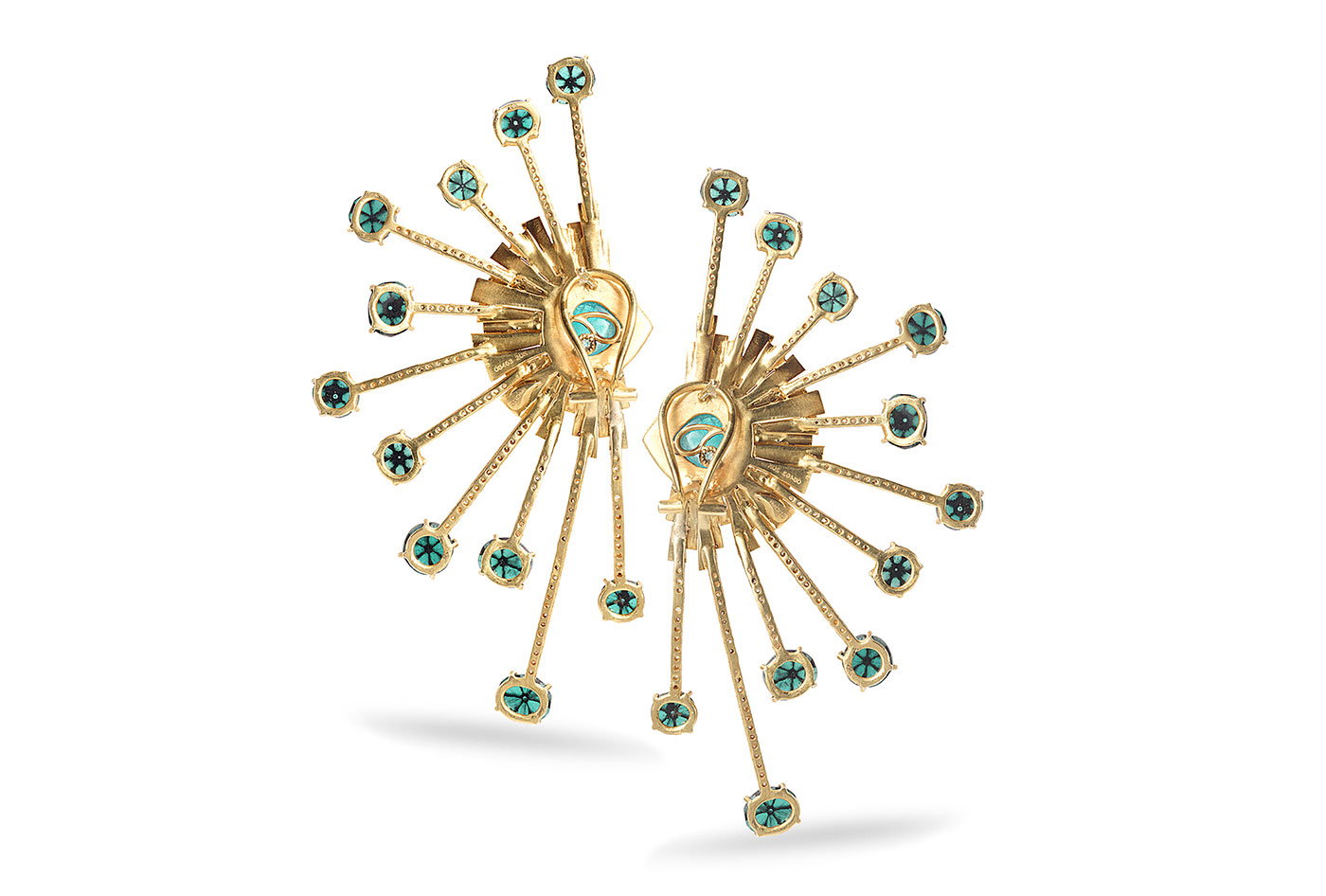 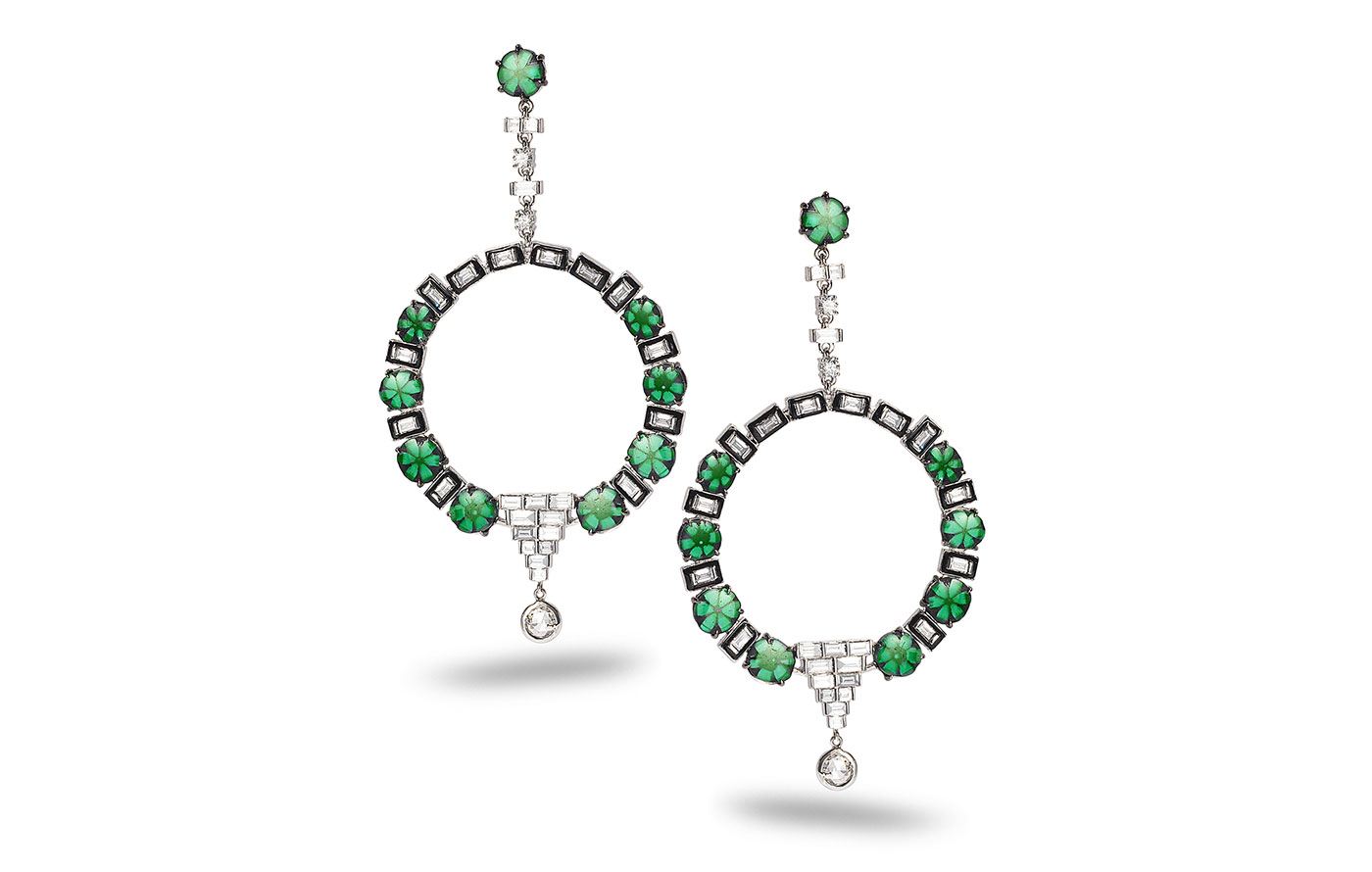 Another example of a design dominated by the inner world of these emeralds are the one-of-a-kind earrings from Coomi’s 'Bloom' collection. These earrings are made with 20 carat gold and two emerald cabochons weighing a total of 3.30 carats surrounded by black enamel. Stones radiate outward from the centre as if they were arrows with 13.20 carats of trapiche emeralds instead of pointy ends. These, as well as the Coomi white gold and diamond earrings, were produced in collaboration with Muzo, a Colombian company which has already earned a reputation for being one of the best procurers of high-quality emeralds that it both mines and cuts. 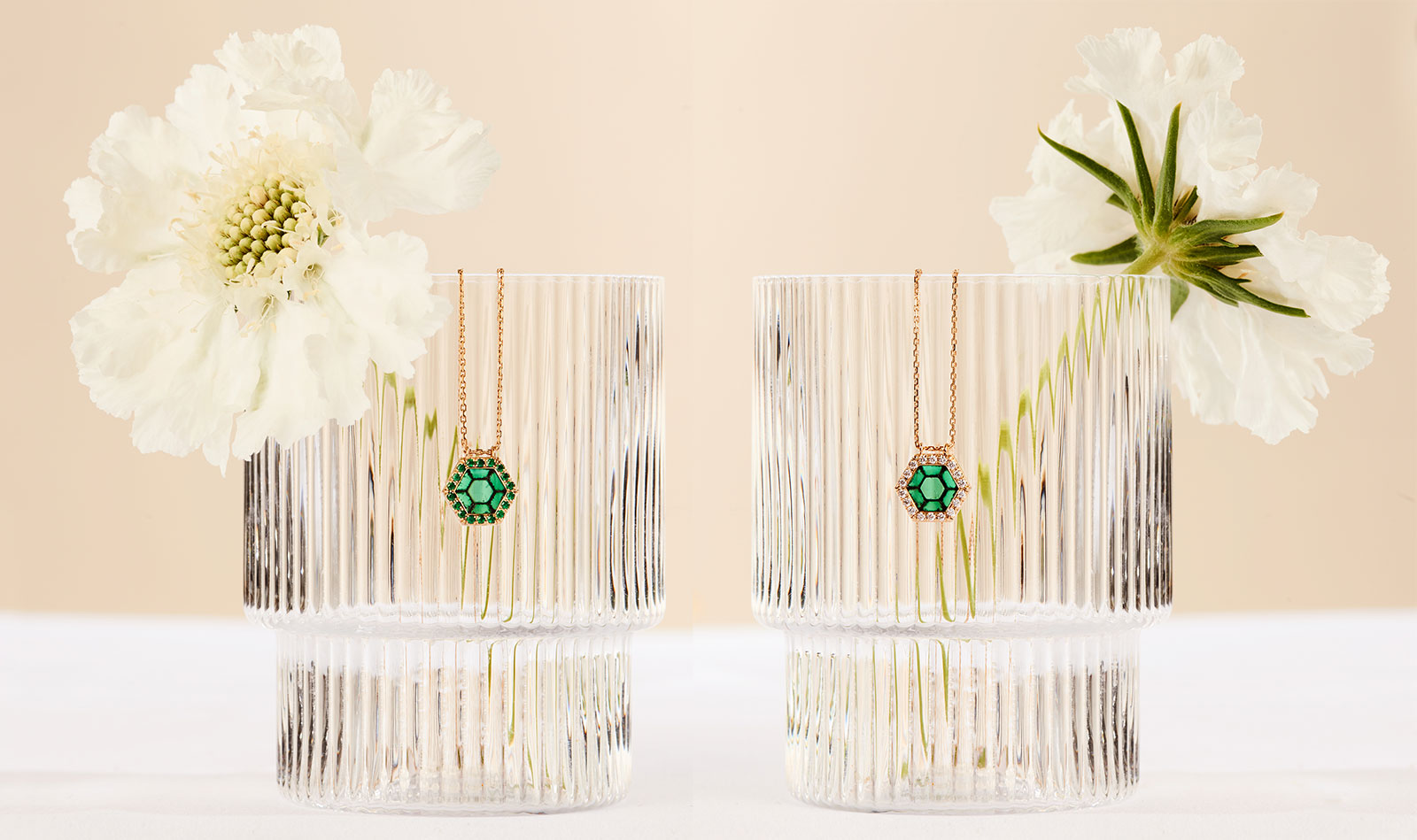 The French designer Alice Fournier has also used Muzo emeralds in her jewellery collection. The delicate hexagonal stone adorns a convertible pendant that is encrusted with diamonds on one side and emeralds on the other. A gold frame securely protects the central stone – due to the stone’s unusual size and the cut which emphasises their patterning, trapiche emeralds are more brittle than standard emeralds. 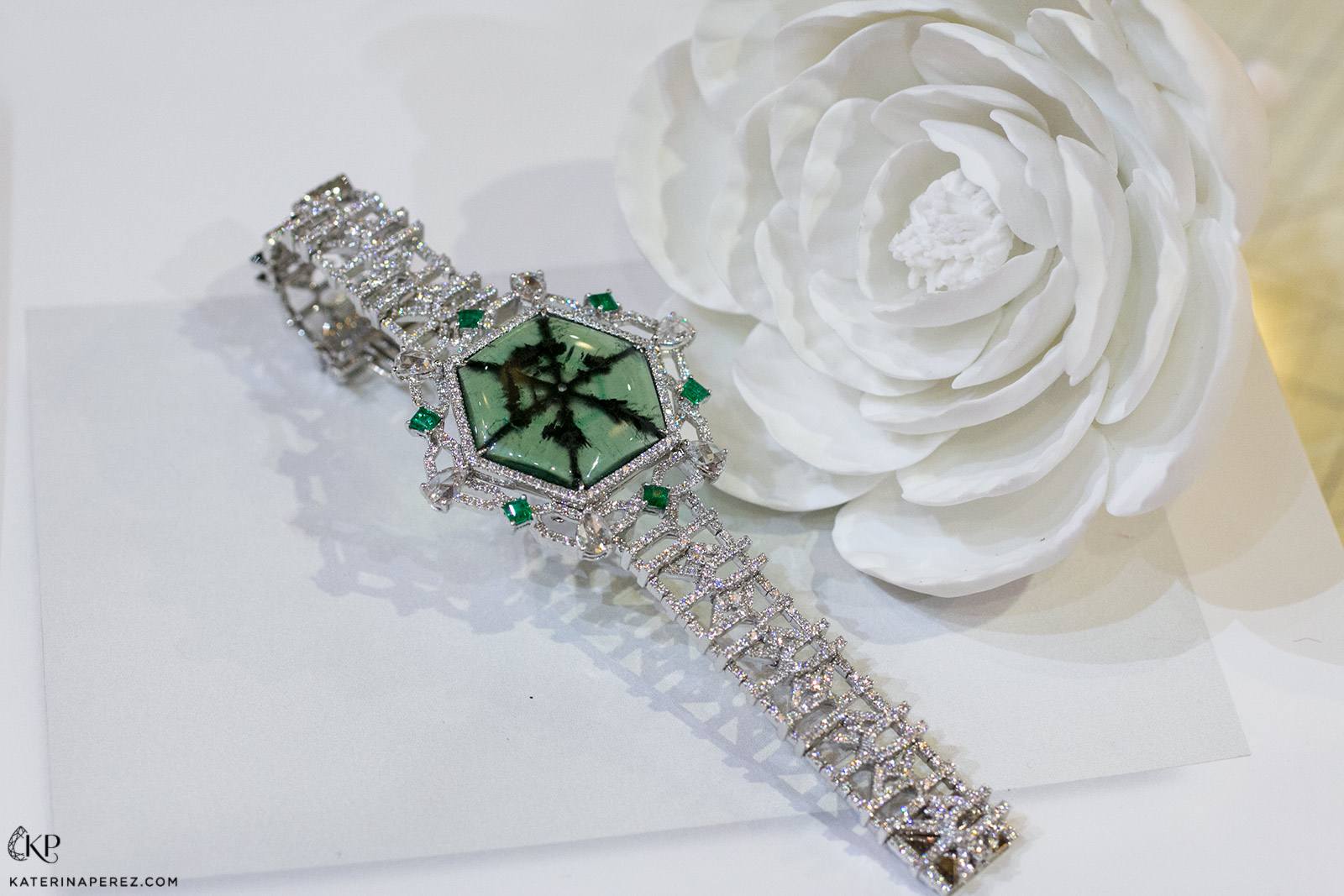 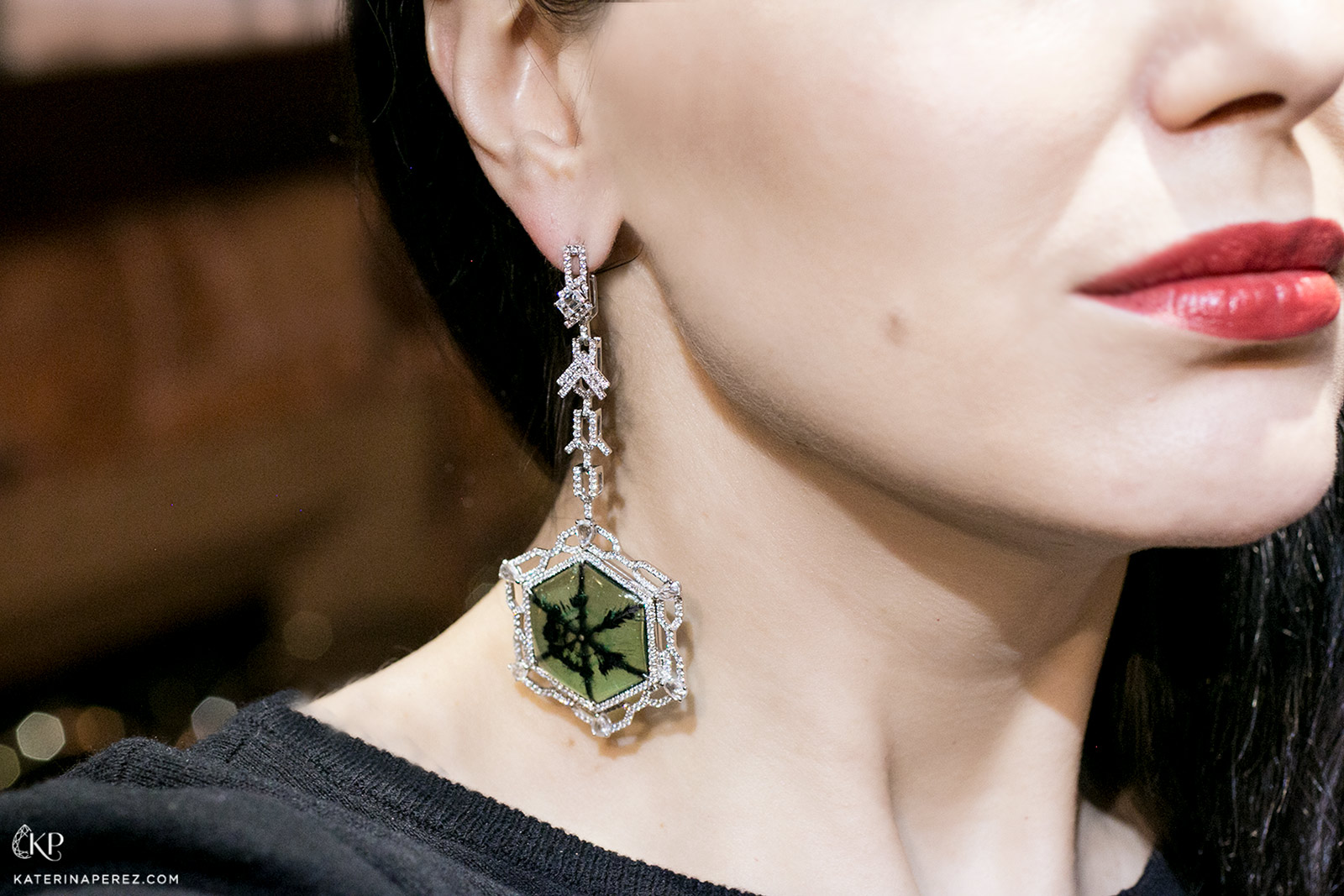 It is worth mentioning that these particular beryls marked with black star can only be found in Colombia. Their value primarily lies in their striking appearance. This is what Chaoqiu He, the founder of Qiu Fine Jewelry, chose to emphasise with her design of an exquisite transformable bracelet for the 'Shanghai/Shanghai' collection. A hexagonal stone weighing 27.52 carats can be removed from the diamond bracelet and placed on a solo earring if you wish. The designer is already due to release a new high jewellery collection in March 2019 which will also include several trapiche emeralds.

When jewellers work with these rare emeralds, they are confronted with the unenviable task of having to create a piece of jewellery that will clearly showcase black rays contrasting with the green background. David and Michael from the private atelier David Michael have achieved this thanks to a thin layer of white gold behind the emeralds that emphasises  the intensity of the green colour (illustrated in the banner image of this article). Russian jewellery designer Vera Tiestto has similarly made a cabochon trapiche emerald the central decorative feature of a white gold and diamond signet ring. Omi Privé founder Niveet Nagpal, meanwhile, has come up with a gorgeous pair of pendant earrings which, due to the minimal use of metal, direct all of one’s attention to the incorporated trapiche emeralds. 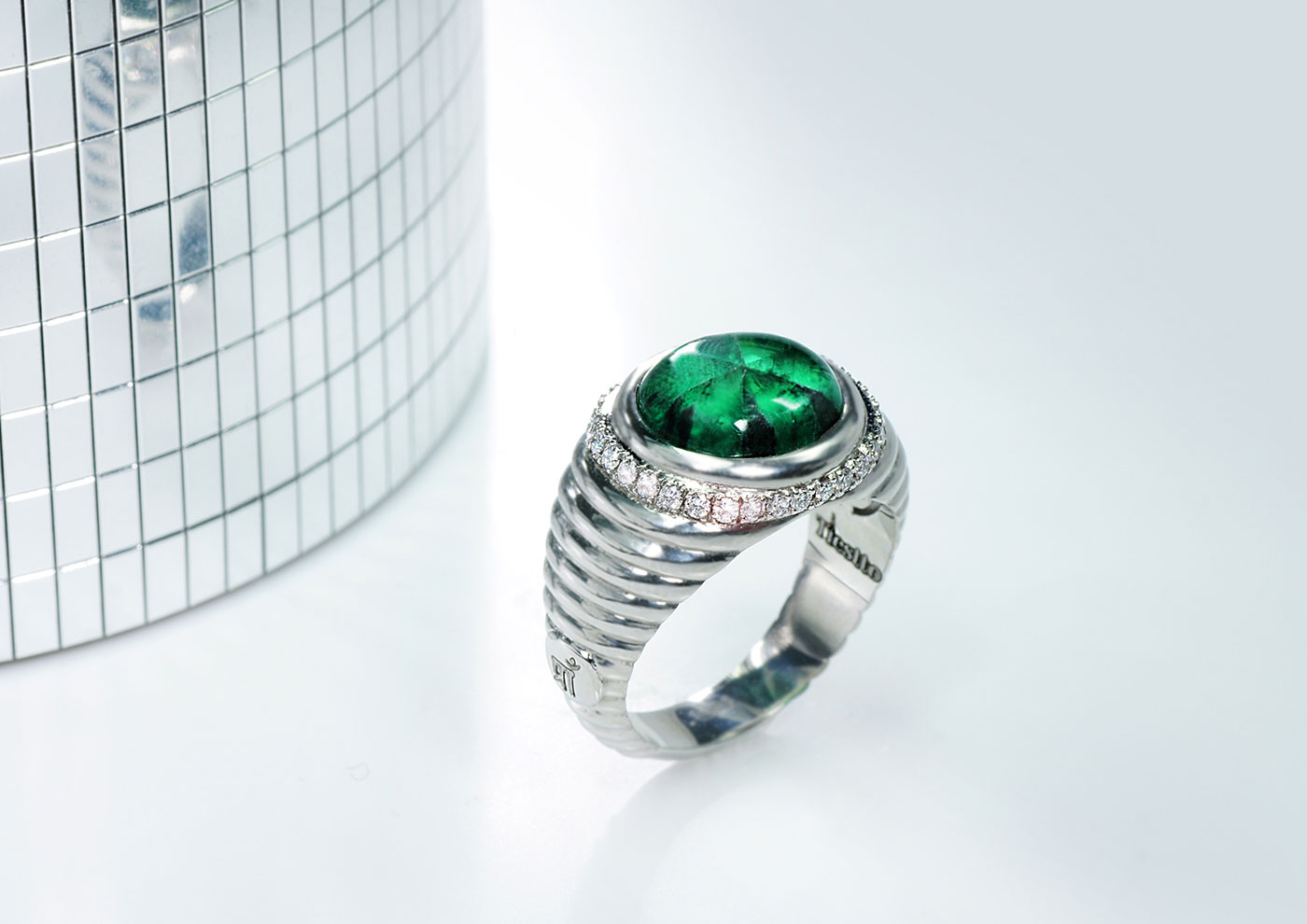 As is the case with most gemstones, finding two identical trapiche emeralds is practically impossible. You can rest assured that every piece of jewellery featuring this unusual gem is genuinely one-of-a-kind.