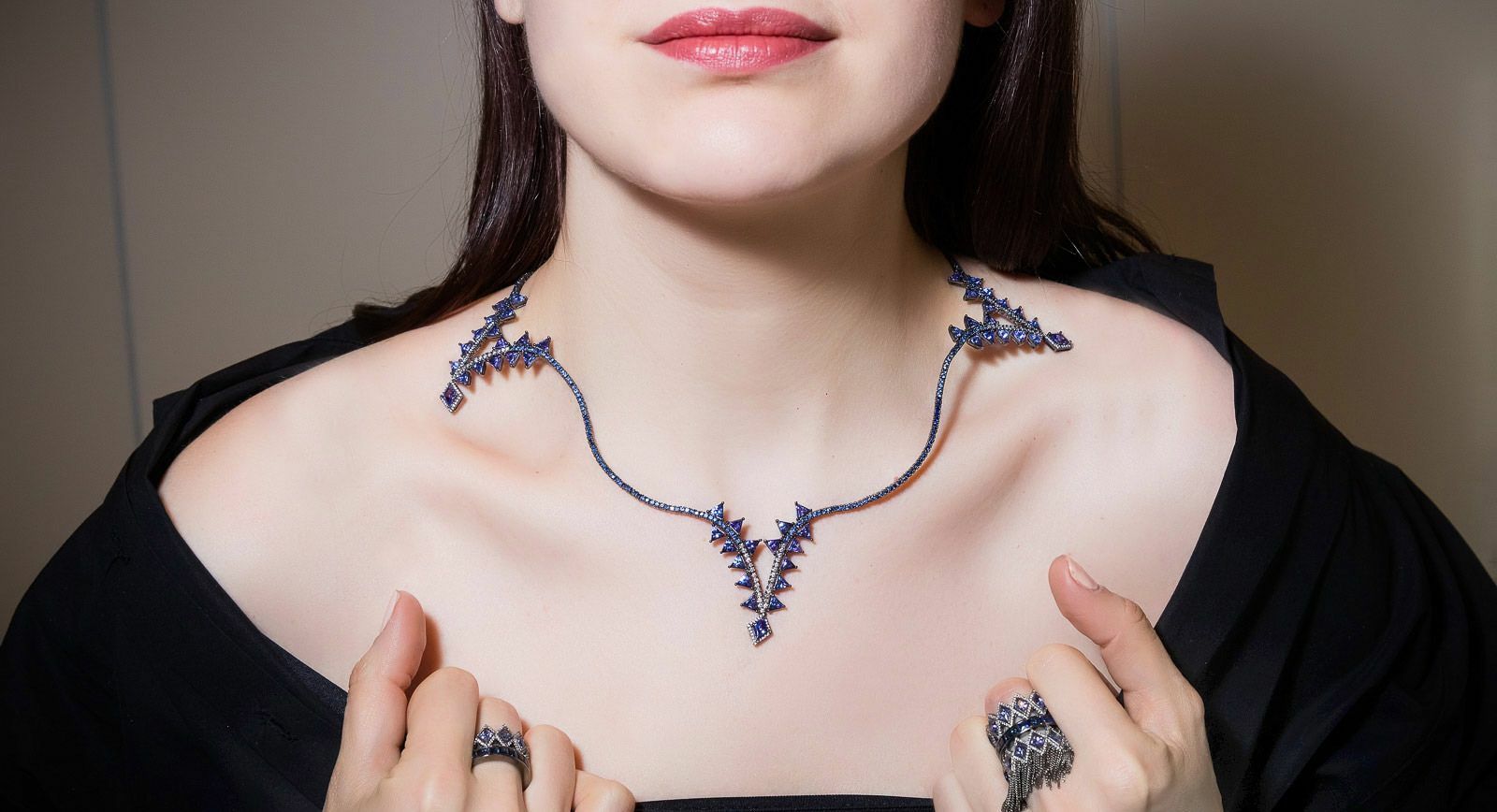 COUTURE show: the best of coloured stones at the Las Vegas fair

The annual COUTURE Show in Las Vegas has such a wealth of eye-catching designs that I could not cover all my favourite pieces in just one article. Instead, I split the most memorable jewels I had come across in four categories: Pearls, Diamonds, Coloured Gemstones and Gold. Having published the first two, I thought it was time we examined the illuminating coloured gemstone category! For me, these designs demonstrated the allure of colour in jewellery and exemplified interesting uses of various gems, from the conventional to the unusual, to create pieces that stay engraved in one’s memory.

Amrapali expanded their collection of high jewellery pieces and presented a pair of earrings that feature two majestic step cut emeralds that are luminous with the depth and excellence of the cut. Their beauty is emphasised by the exquisite architecture of the piece, and the way in which the designer has allowed the vibrant emerald to speak for itself. The centre stones are surrounded by diamonds in various cuts highlighting the brand’s ability of maintain ancient cutting techniques and traditions through their skilled craftsmanship. 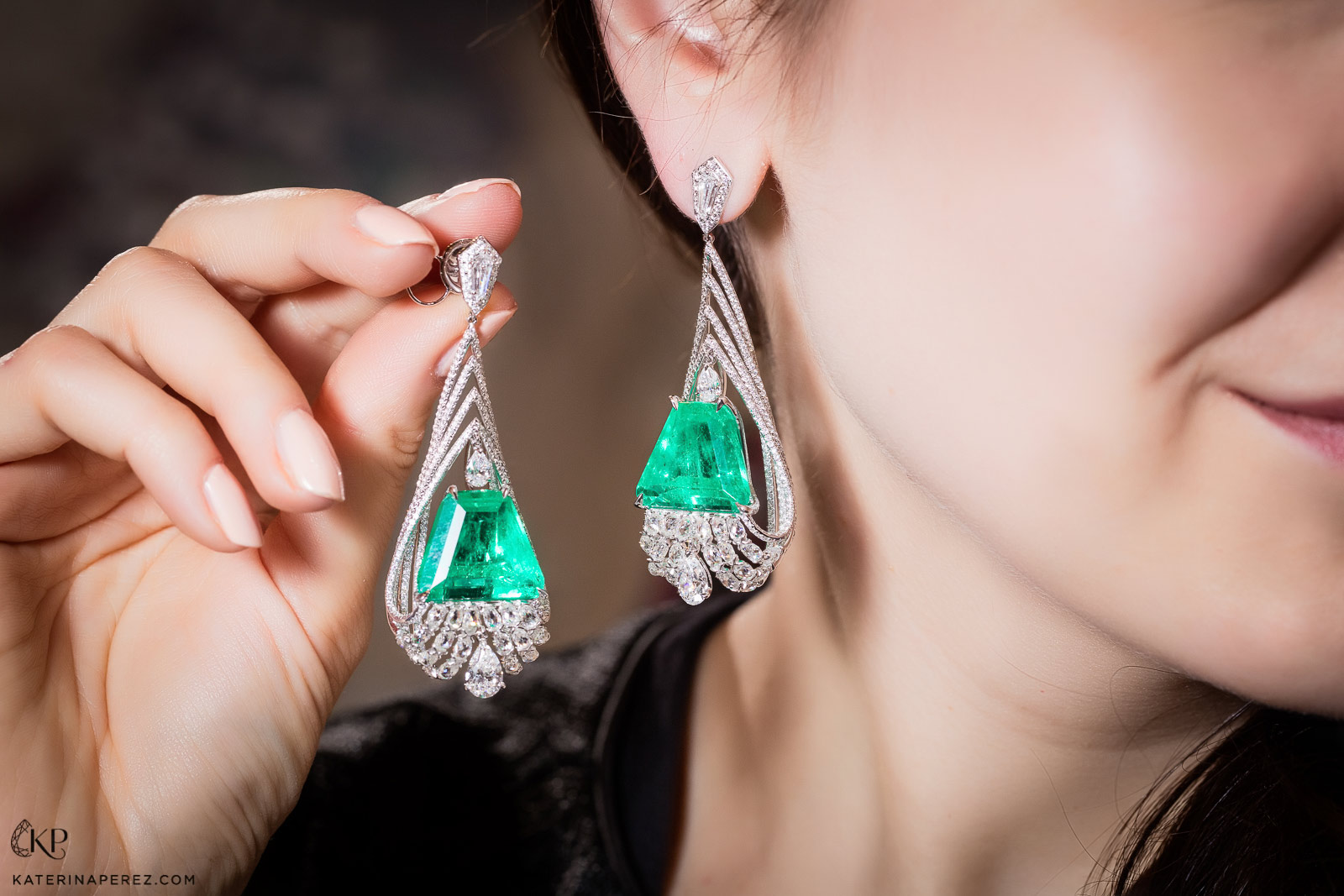 Caratell have designed an exquisite floral necklace which an oval rubellite, coloured sapphires and 6.63 carats of diamonds. The brand’s designer Michael Koh accurately recreated the petals of flowers, which variously clamber and climb across the wearer, splaying delicately around the collarbone. The daring combination of bright blues, greens, yellow and pinks really made this necklace stand out among all others I have seen at the fair. 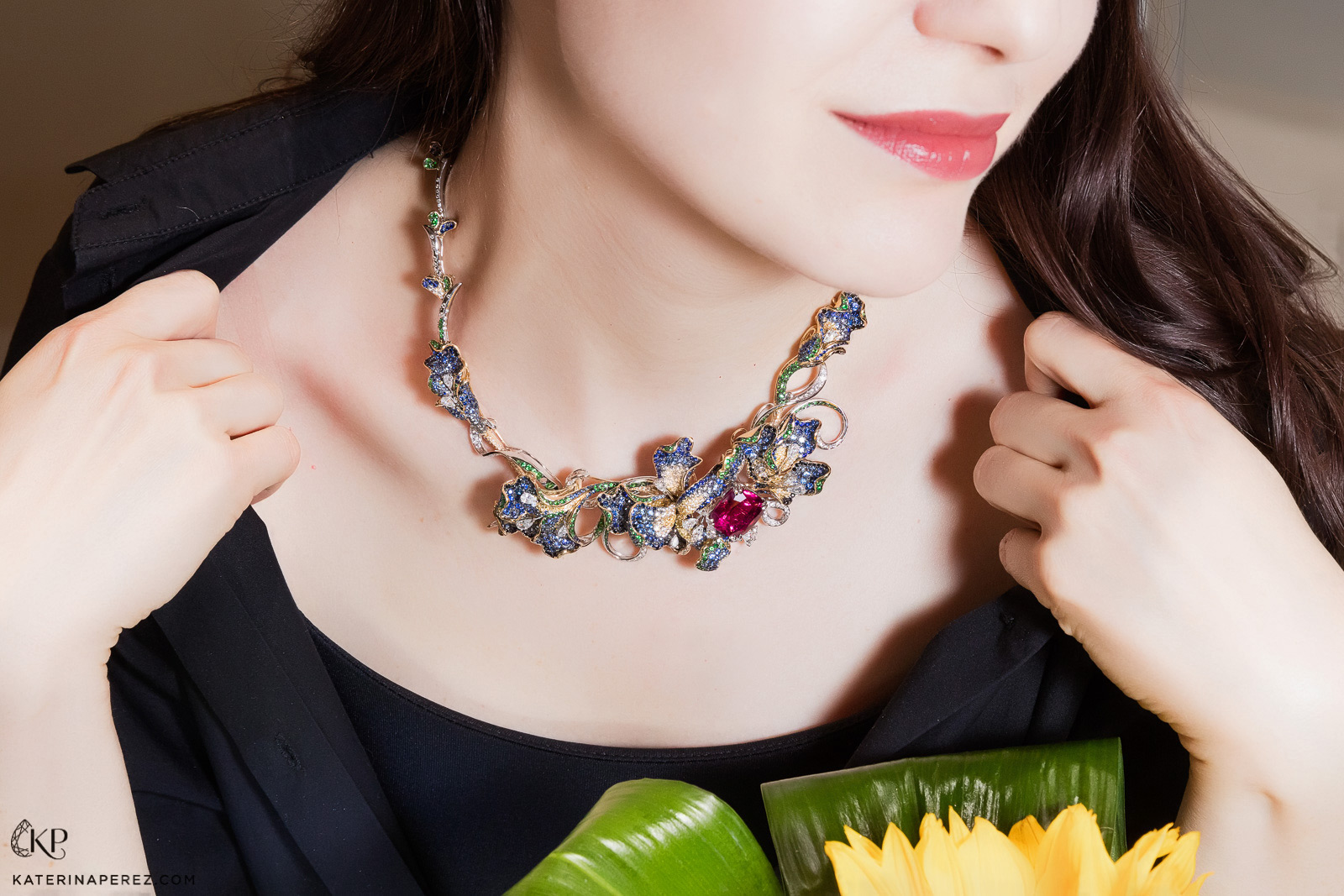 Sutra is famed for its use of coloured gemstones which are - more often than not - combined in statement designs. At the COUTURE show that brand presented a collection which brought to mind Victorian jewellery in terms of the setting style. The highly feminine necklace was embellished with over 60 carats of pink sapphires and white opals that were surrounded by over 18 carats of diamonds. My favourite feature of the necklace is that it can be worn as a long neck piece or doubled up to form a shorter version. 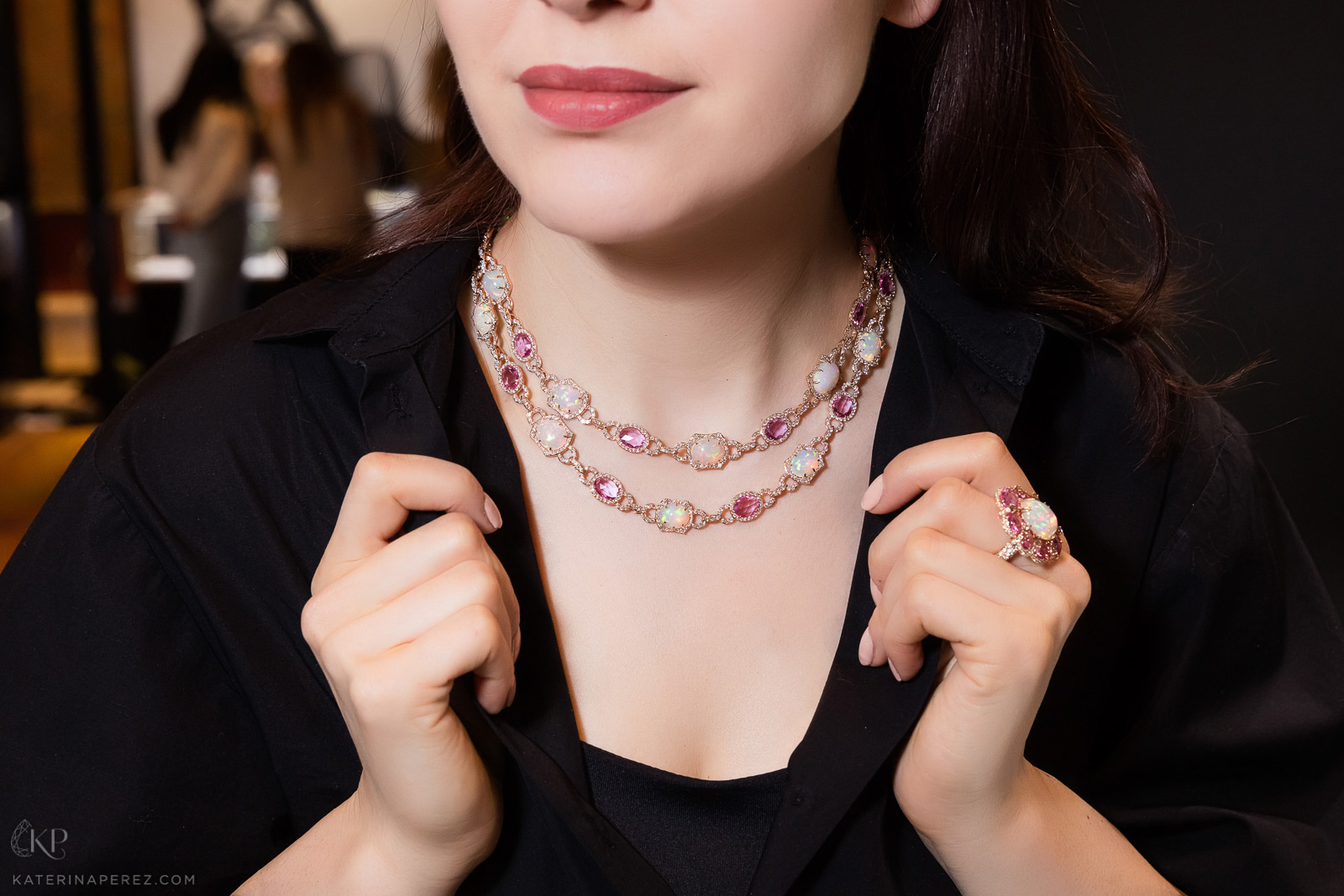 One of my favourite pieces of coloured gemstone jewellery from the Couture show was this set of bracelet and earrings created by the Brazilian brand Hueb. It is hard to resist the allure of deep purple tanzanite – one of the rarest gemstones mined only in Tanzania. The trillion cut stones are beautifully complimented by the diamonds and 18k white gold setting, which draws the eye to the tanzanite with its linear forms. 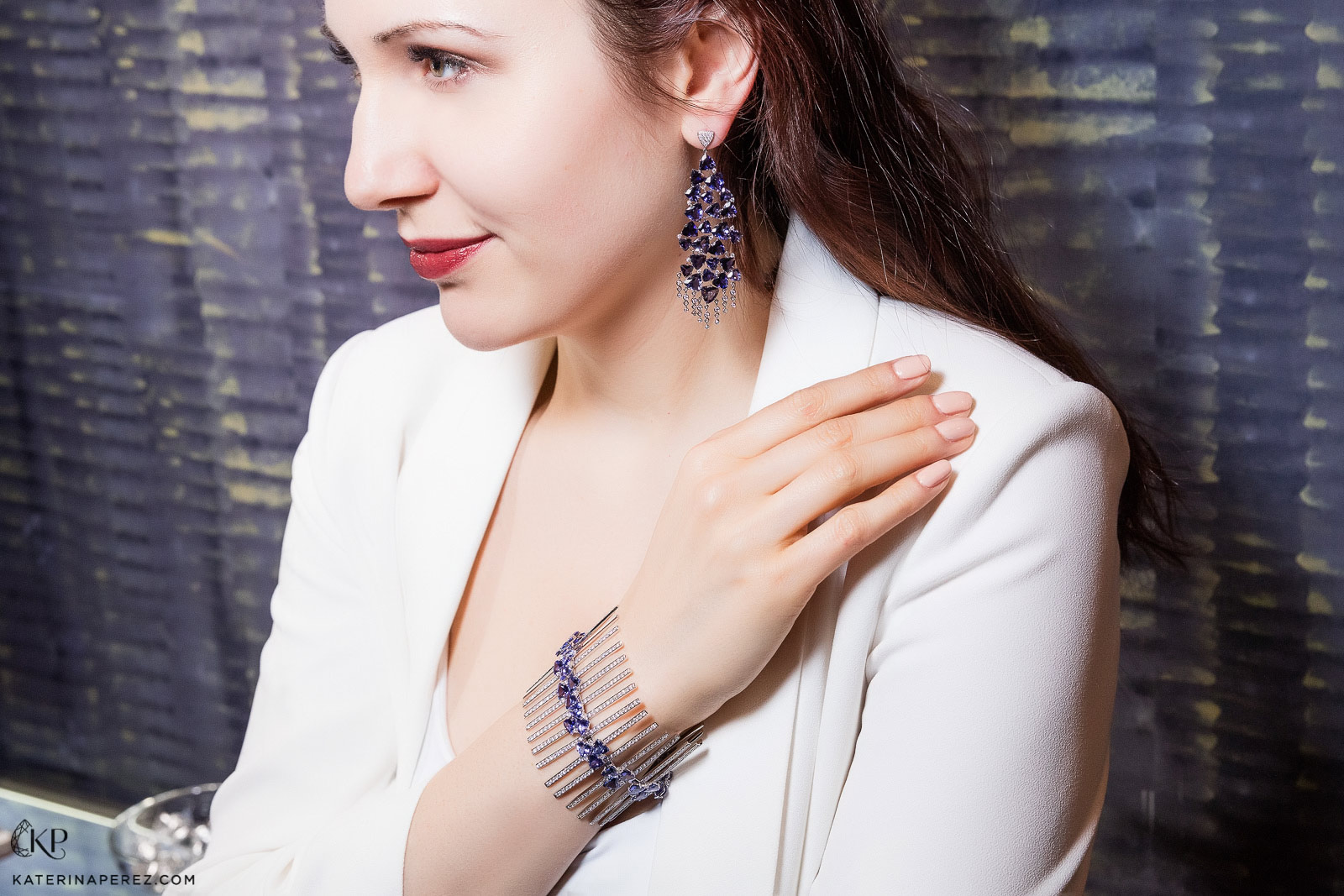 The Israeili brand Inbar, that is known for their use of coloured stones and moonstones in jewellery, demonstrated the diversity of the green tourmaline with their selection of cocktail rings. The elongated step cut, pear-shaped, cushion and square cut tourmalines looked especially dramatic surrounded by a halo of diamonds. Having put all rings side by side, I could really explore the true depth and variation in the shades of green exhibited by these tourmalines. 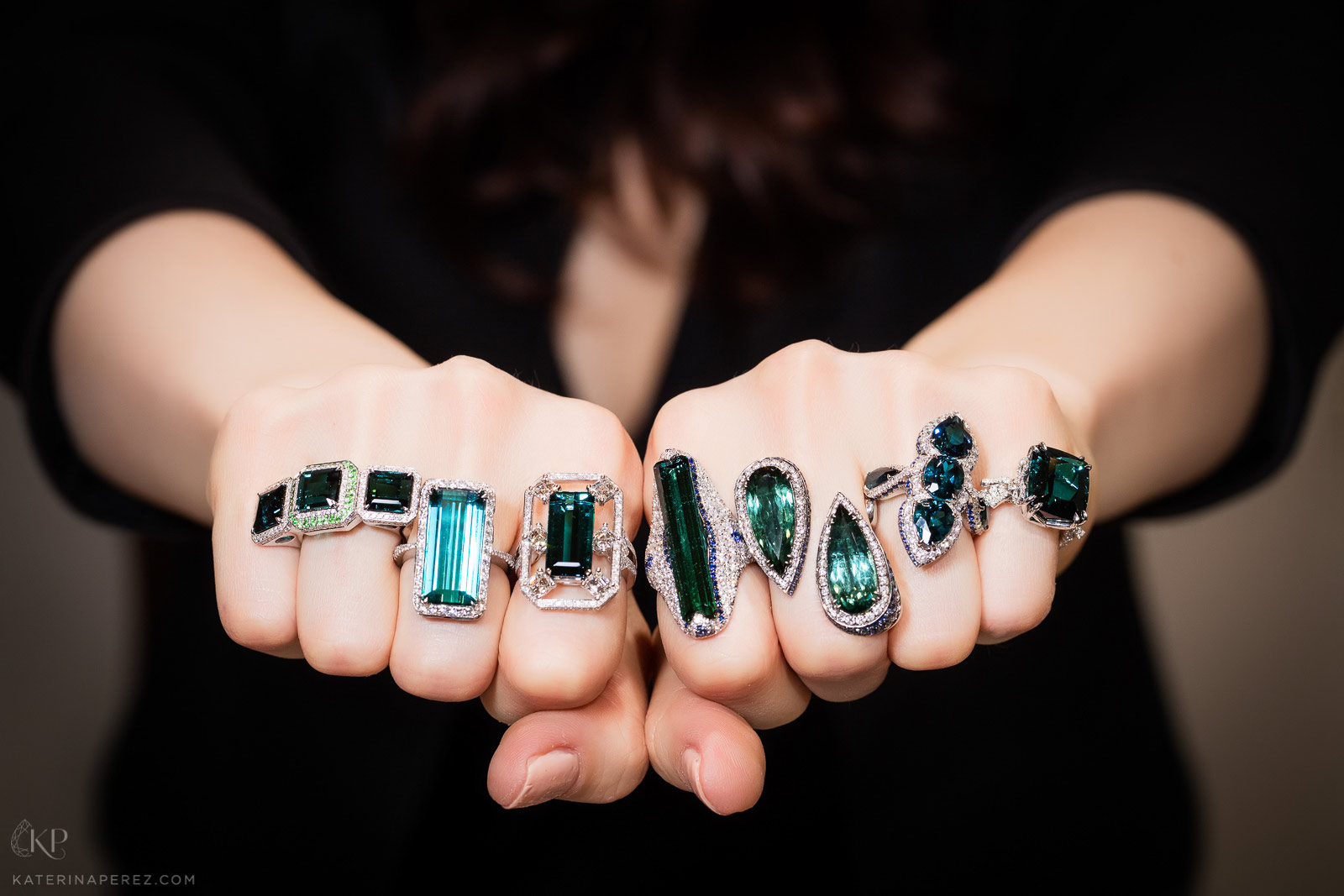 Karma el Khalil, Lebanese designer who is based in New York, presented a number of striking cocktail rings with coloured stones. One of the rings that caught my eye – I am wearing it on the left hand- belongs to The Ridge collection and features an intriguing gem called chrysocolla. It belongs to the very small group of copper-bearing stones, the more recognised specimens of which are turquoise and malachite. The ring on the right is another show-stopper, with a whopping 15-carat aquamarine resting on a diamond – encrusted shank. 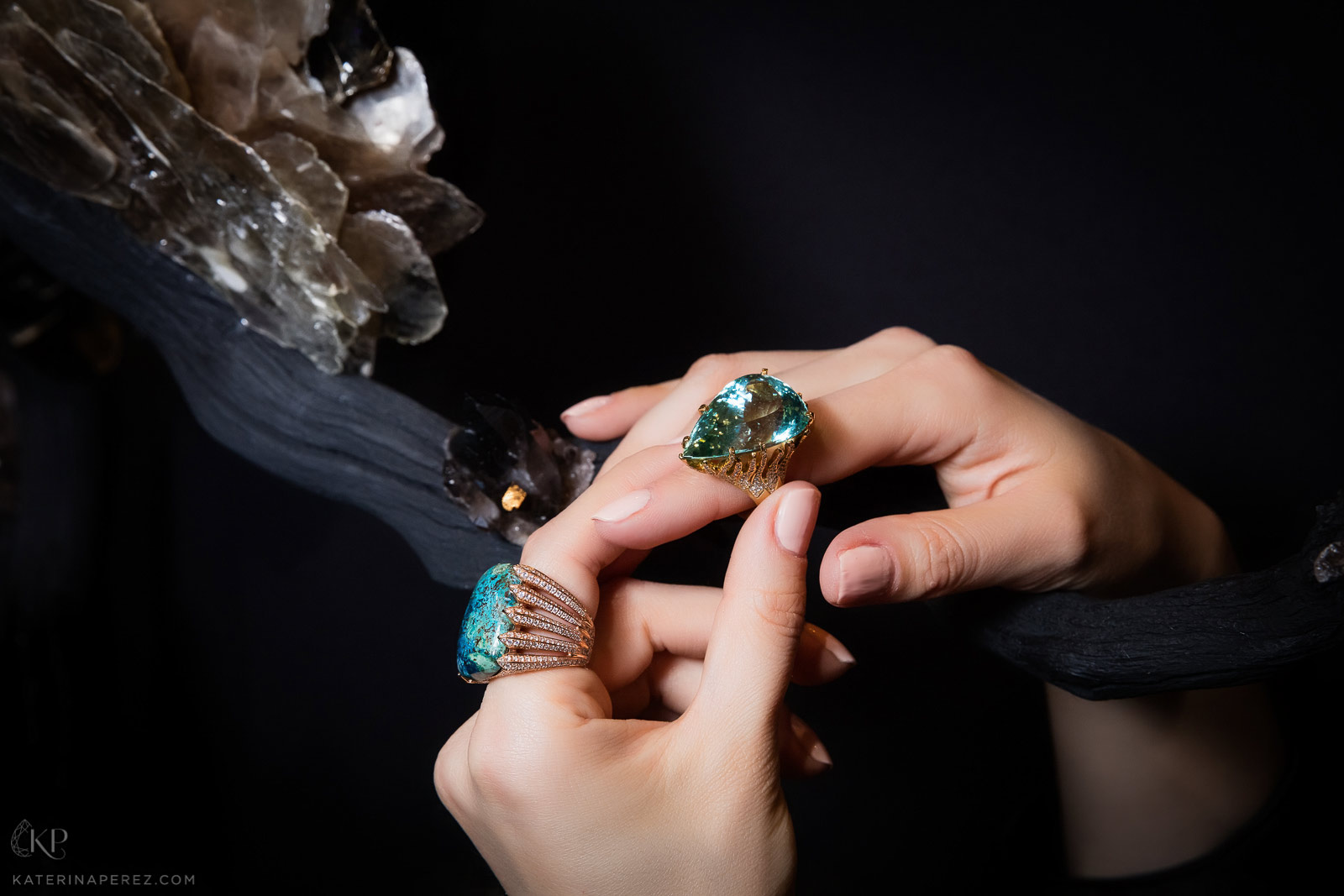 British designer Leyla Abdollahi’s four-pointed necklace with rhodolite garnet, tourmaline and amethyst set in 18k rose gold represented testament to colour and form. Its supple design allowed the necklace to lay perfectly across the décolletage and follow its every curve. One of the unique features of the piece was not only its unusual pointed shape, but also the graduation of colour from lighter to more intense pink gemstones, that demanded the eye follows its unusual shape. 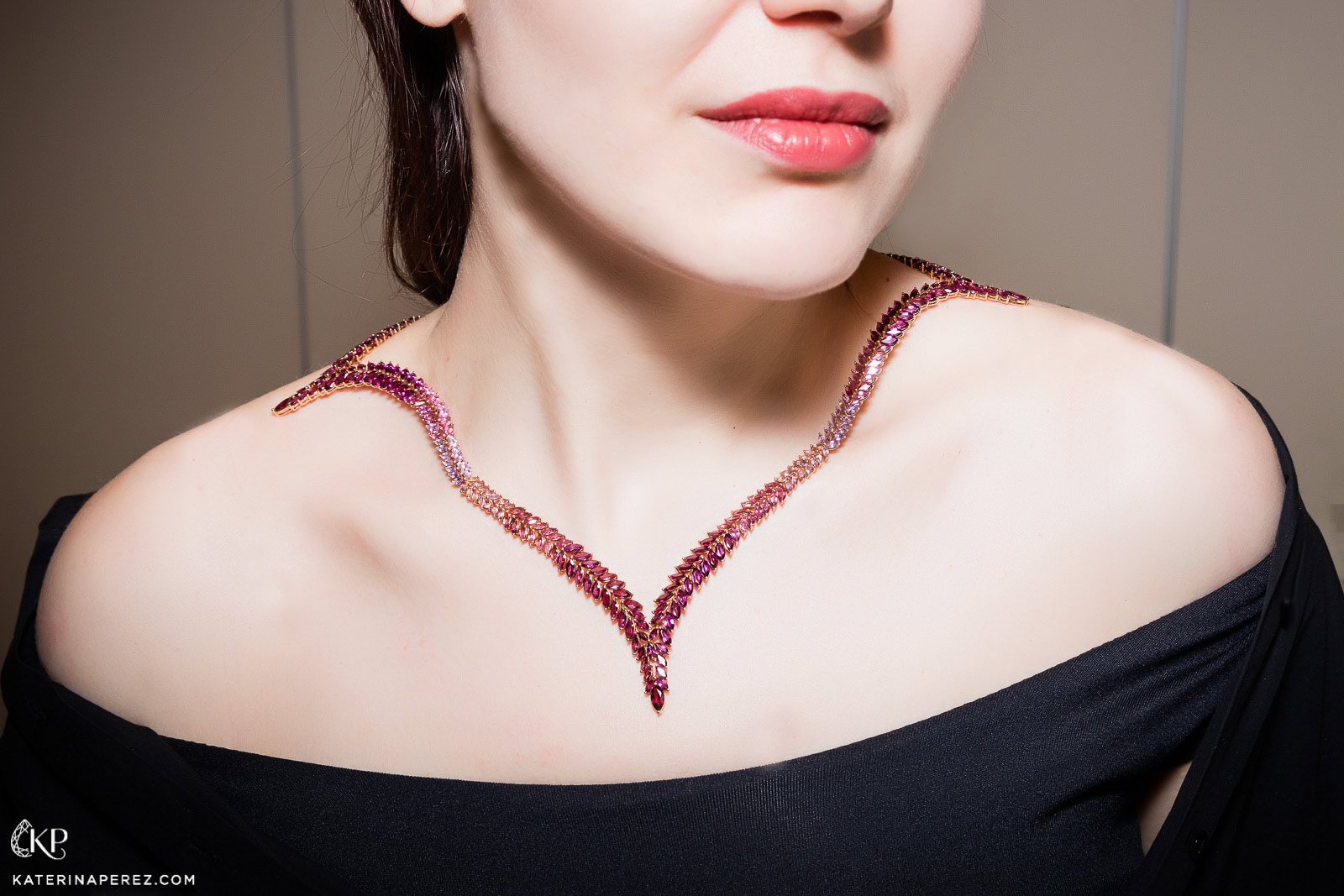 Paul Morelli’s 3 spinel cluster rings, which I got instantly drawn to because of their pastel blue colours, form a remarkable part of his latest designs. The chic ‘Marche’ ring features a rare colour changing emerald-cut spinel surrounded by a double row of baguette-cut diamonds, while the ‘Moderne’ piece has a cushion cut grey spinel in the centre. The most ‘modest’ of them all is the ‘Escalera’ ring that features a double diamond halo around the step cut central stone. 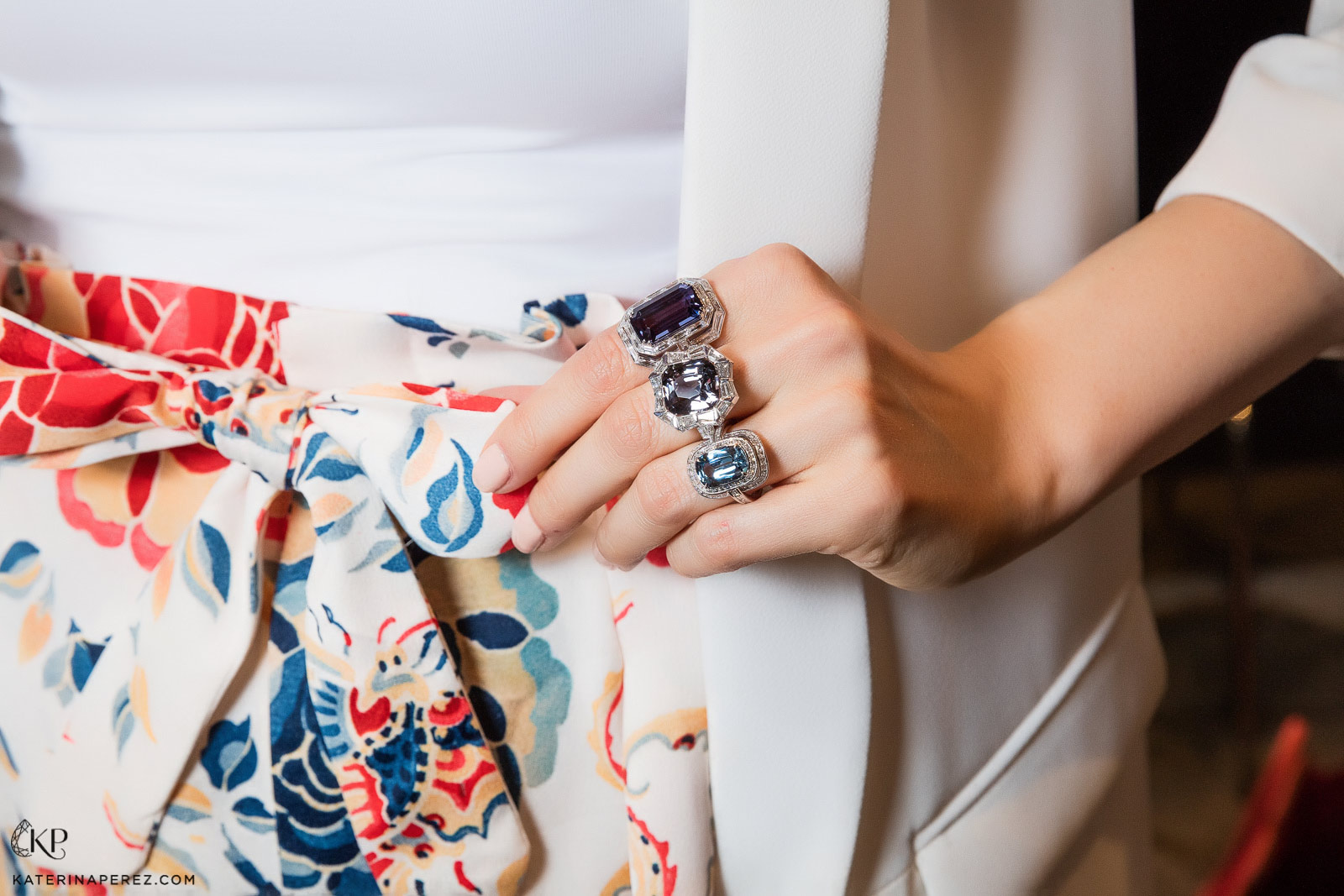 Paula Crevoshay often creates works which are inspired by the beauty in nature, and this ‘Man of War’ necklace is no exception. The incredible use of the 32.48 carats feature opal, accented by 18 pink sapphires, as well as a further 2 opals weighing 3.29 carats, creates a glowing, luminescent appearance which perfectly replicates the jellyfish. Coral and chrysocolla are used to imitate the dangerous tentacles of the jellyfish, making this piece a stunning use of the combination of colours and textures available within gemstones. 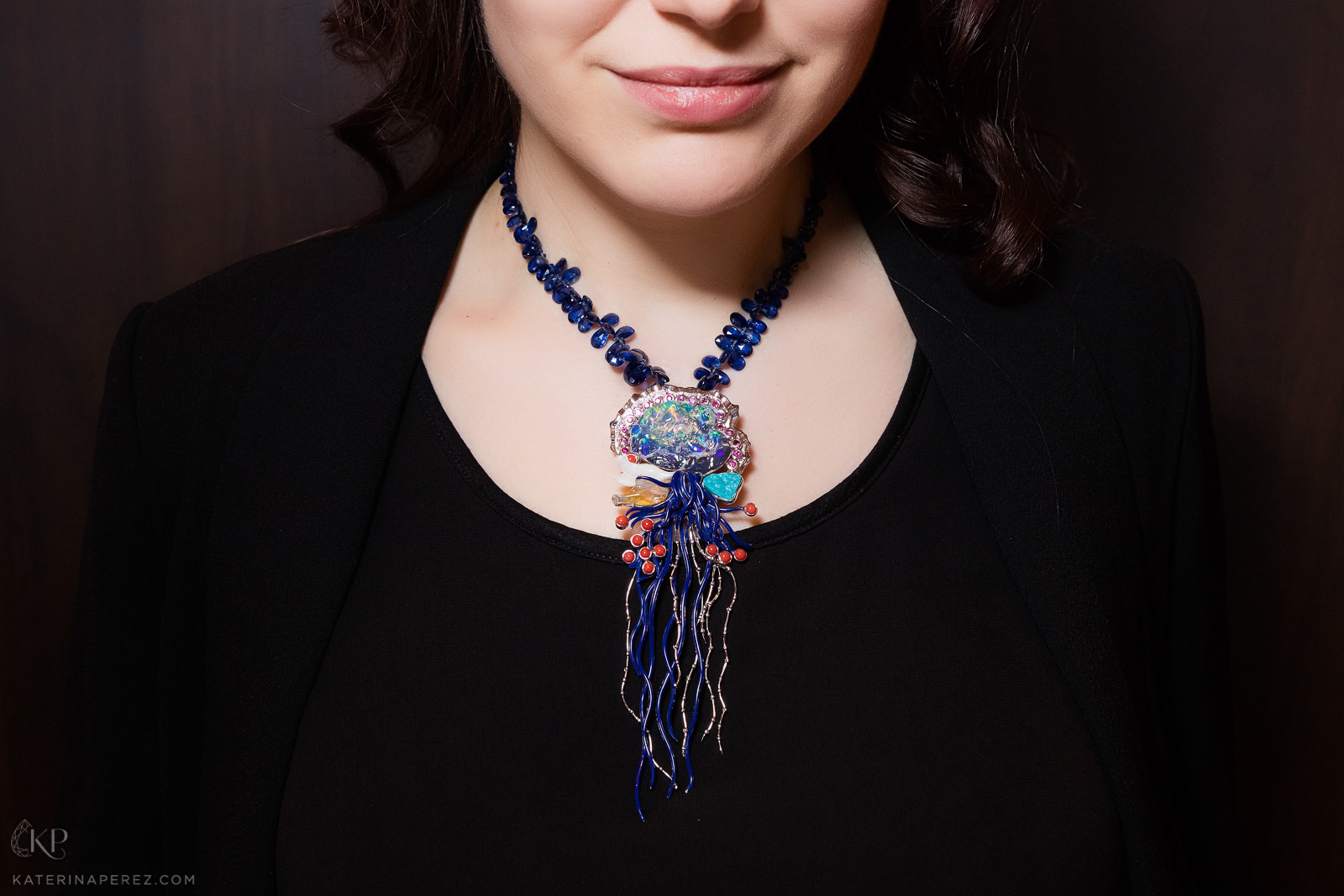 Sevan Biçakçi’s pieces are always true works of art which draw crowds, and his latest creation - the ‘Butterfly Effect’ pendant – is another example of the fantastical levels of imagination and craftsmanship that go into fashioning his fine jewellery artworks. The butterfly pendant uses the techniques Sevan Biçakçi has become known for – carving gemstones and backpainting to create the illusion of tiny butterflies trapped within the gems. And when you look at the portrait emerald in the centre, it is cut in a special way that allows the flower underneath it to shine through. 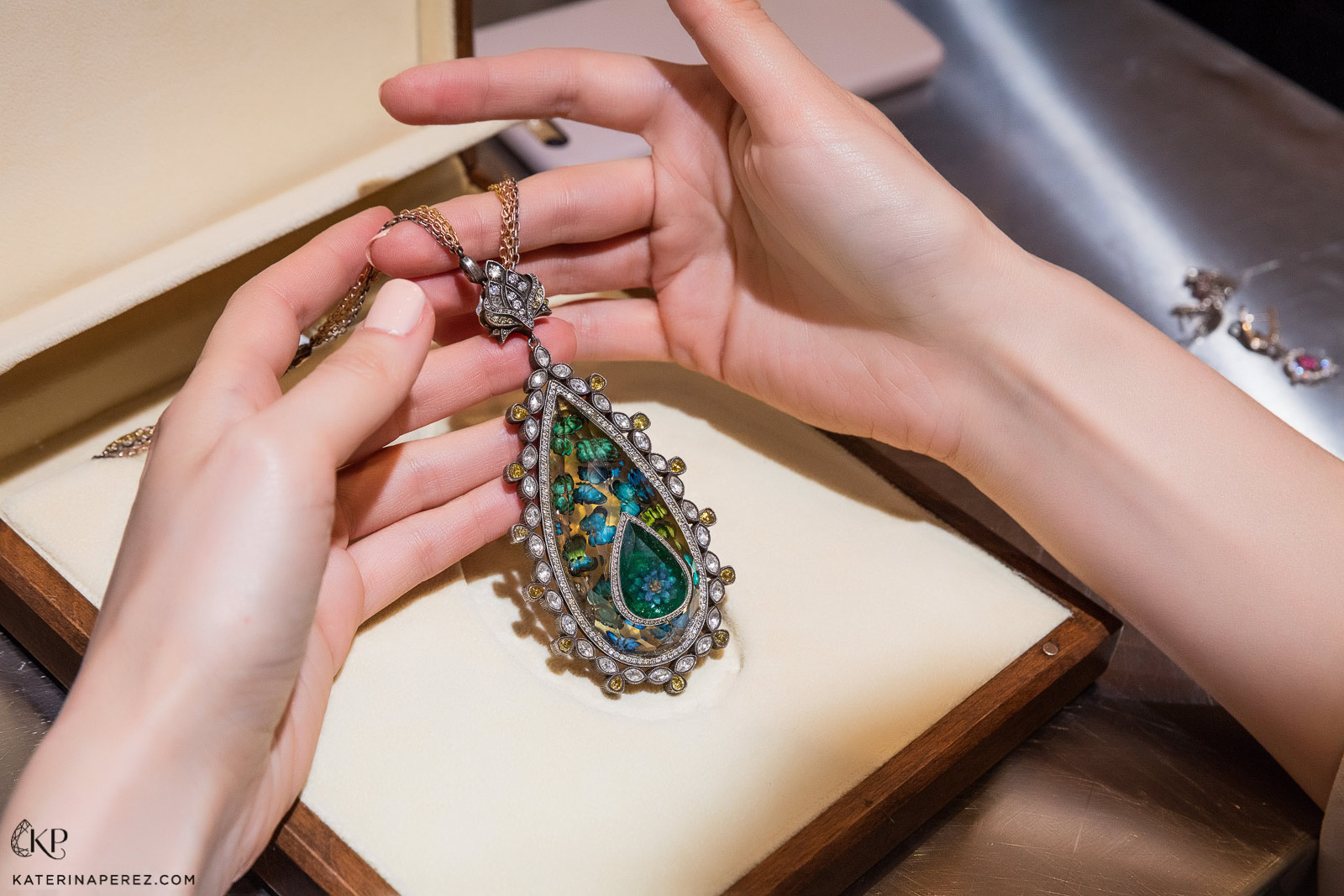 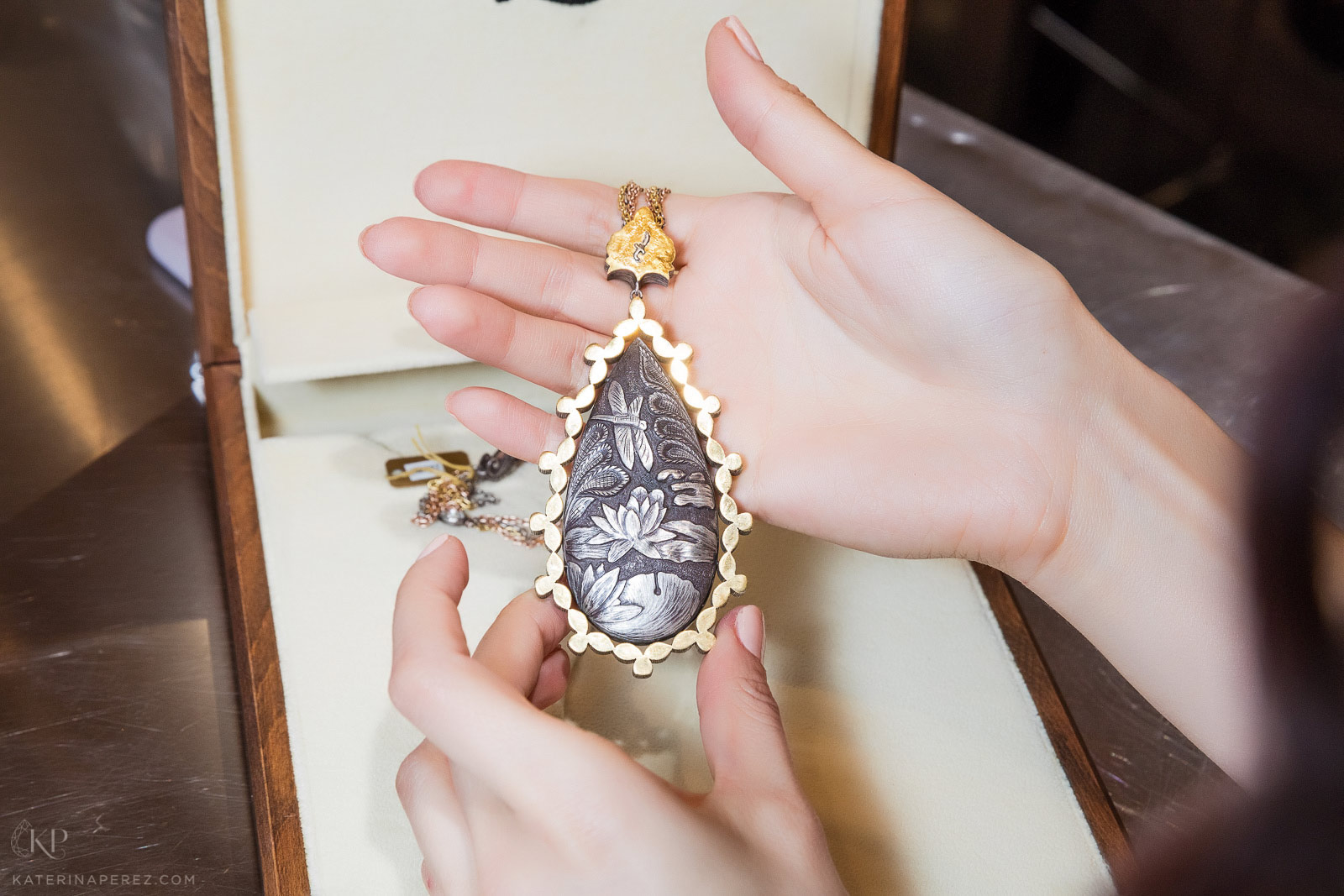 The array of gemstones at the Couture showcase 2017 was larger than ever before, and with fine jewellery craftsmen utilising stones of all types - rather than only the traditional ‘precious’ gemstones – COUTURE show visitors were treated to a spectacular display of both colour, and creative innovation. 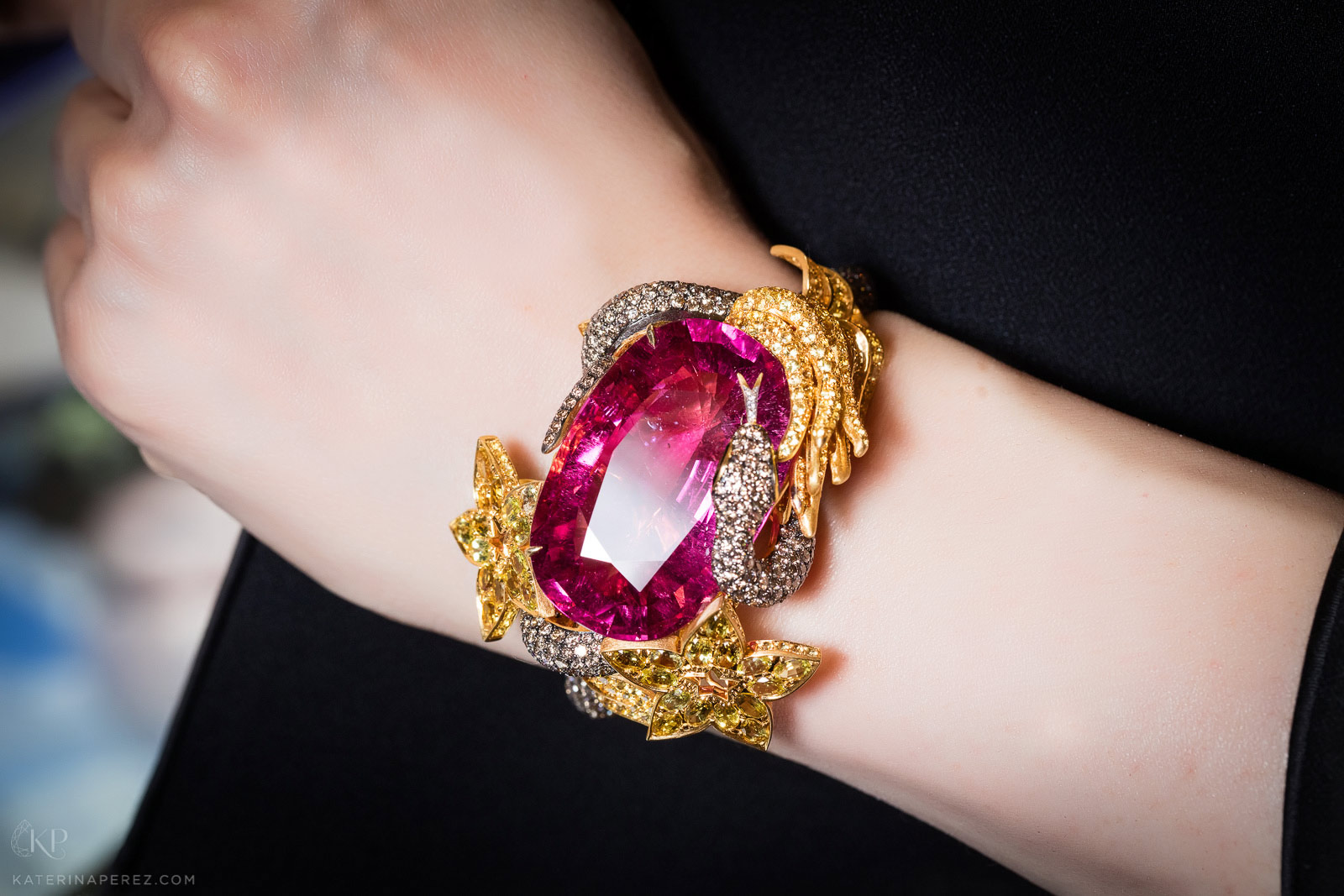 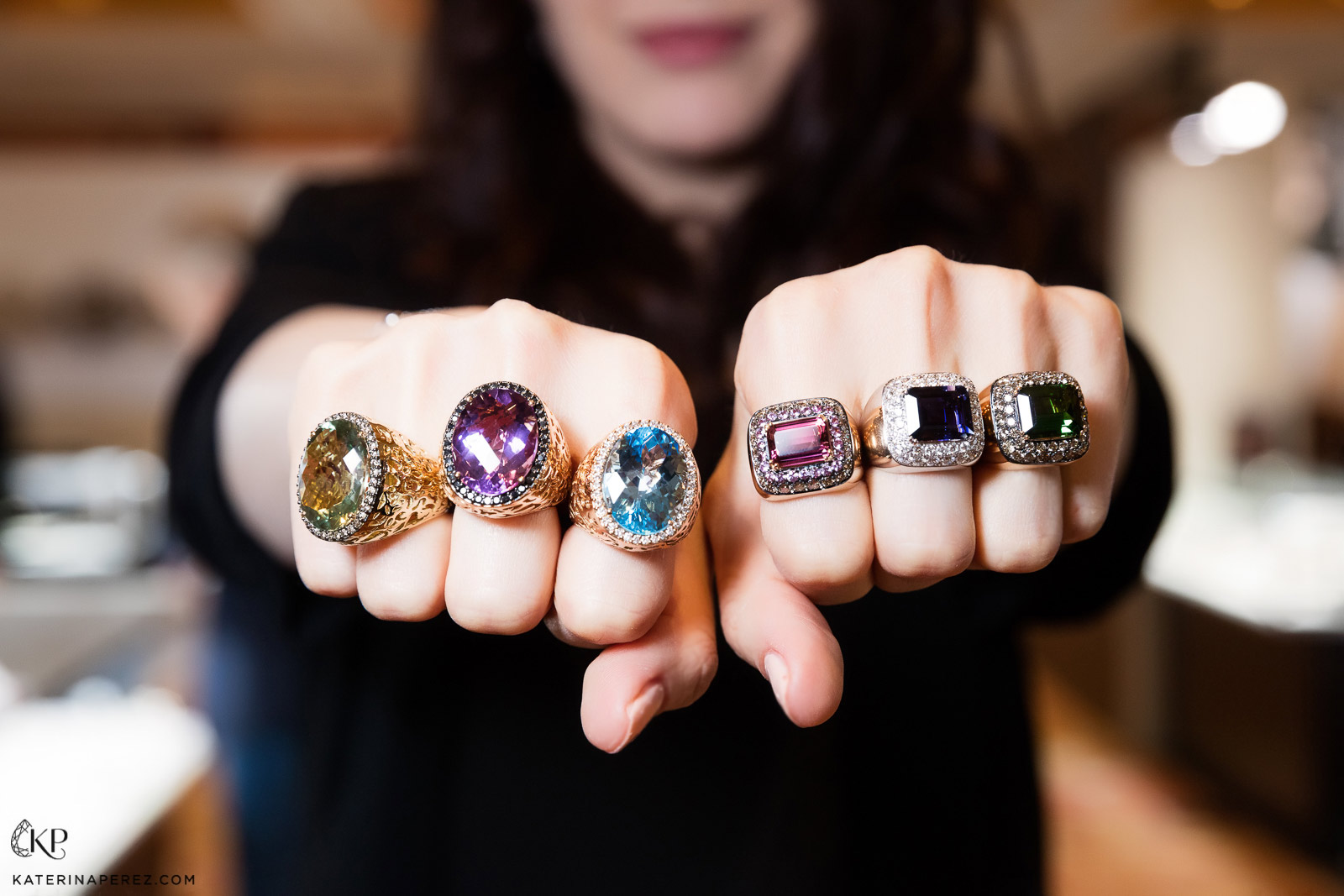 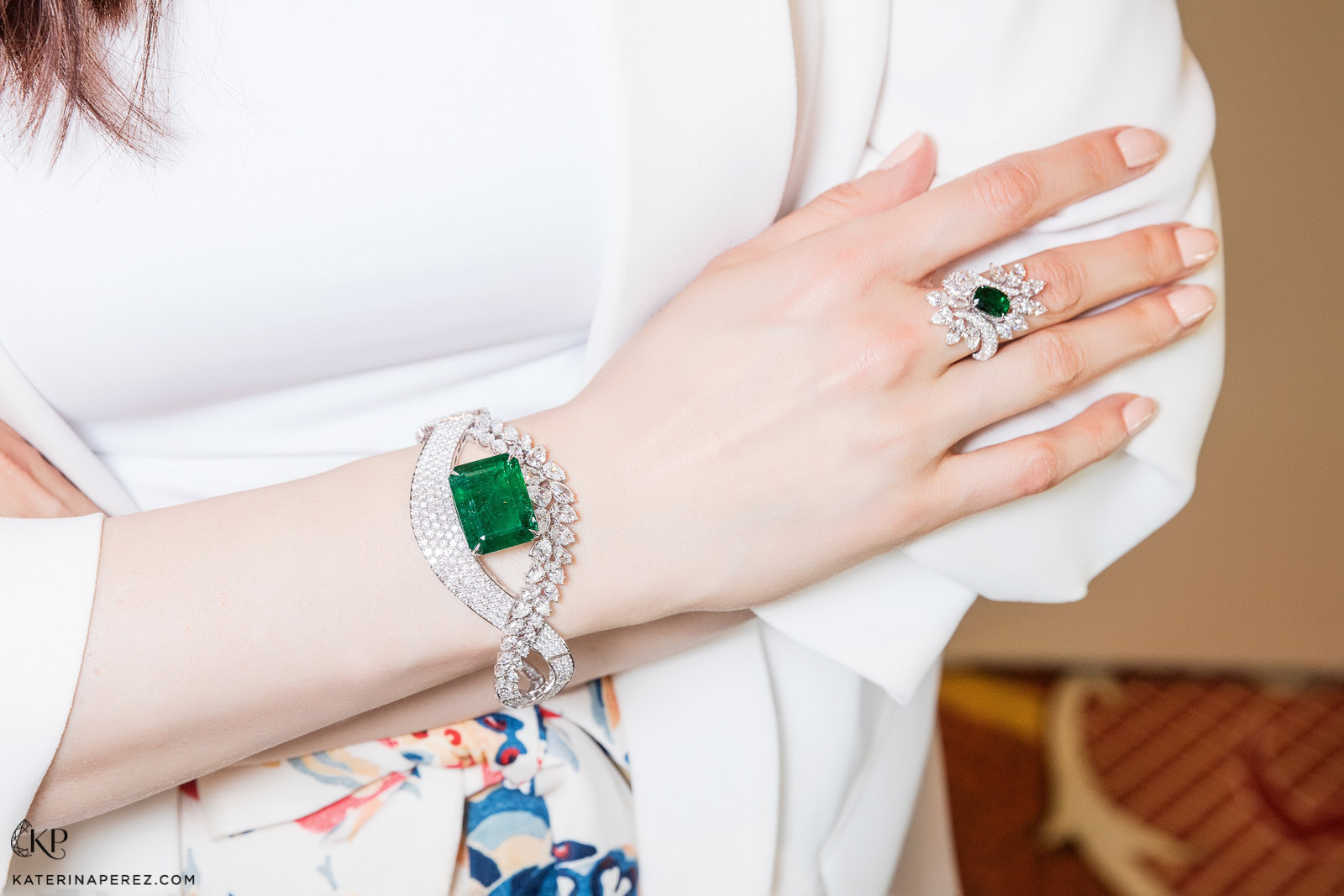 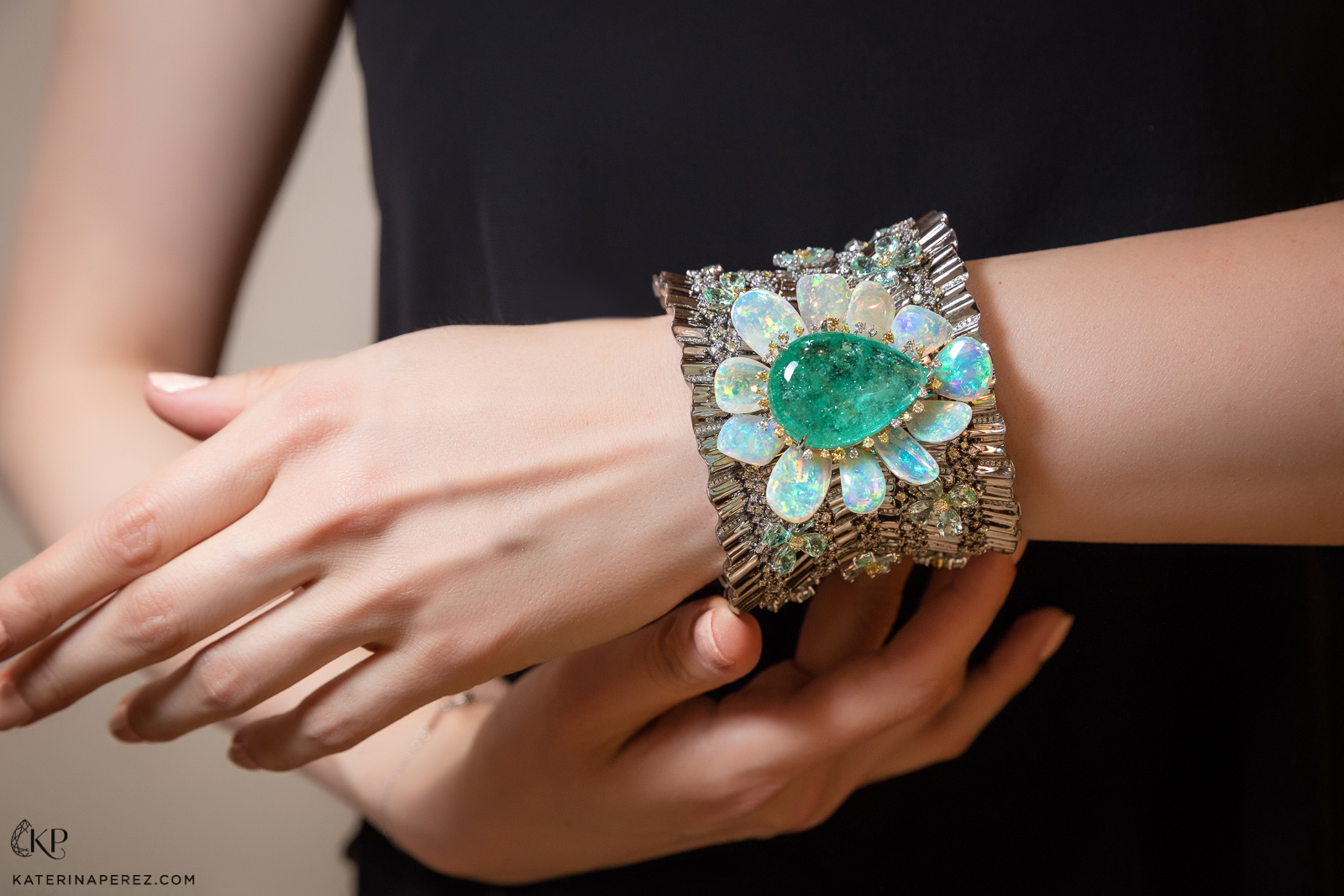 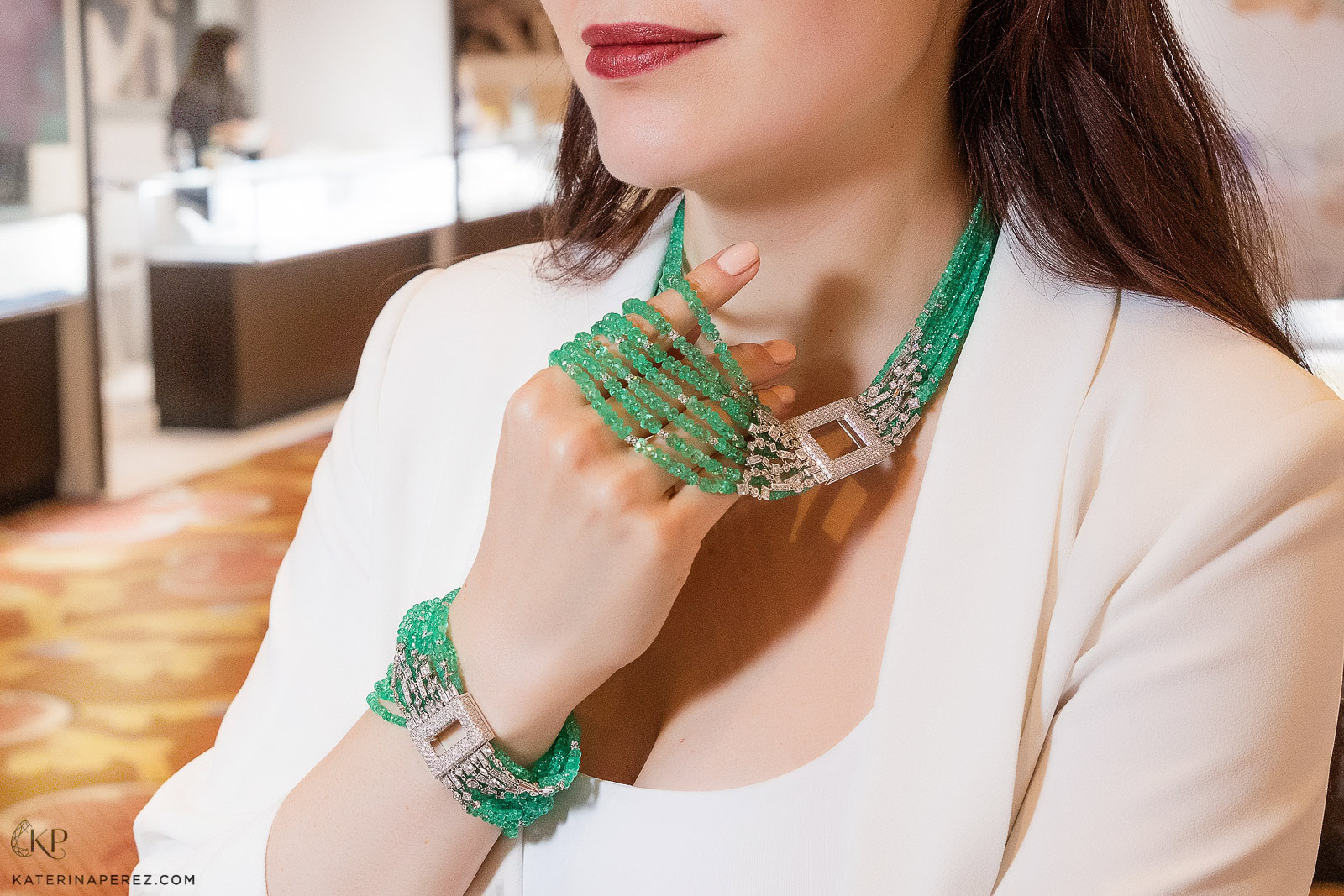 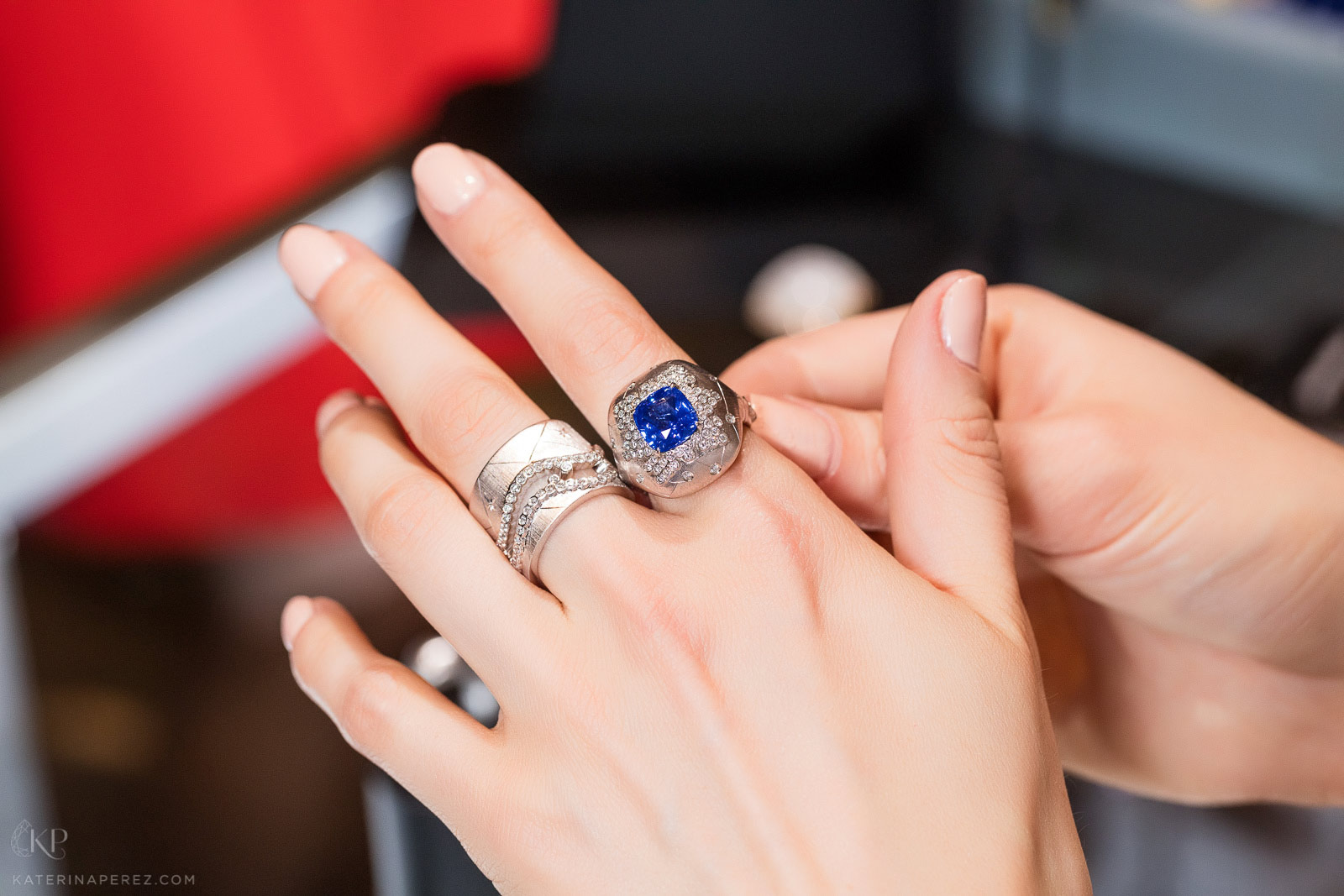 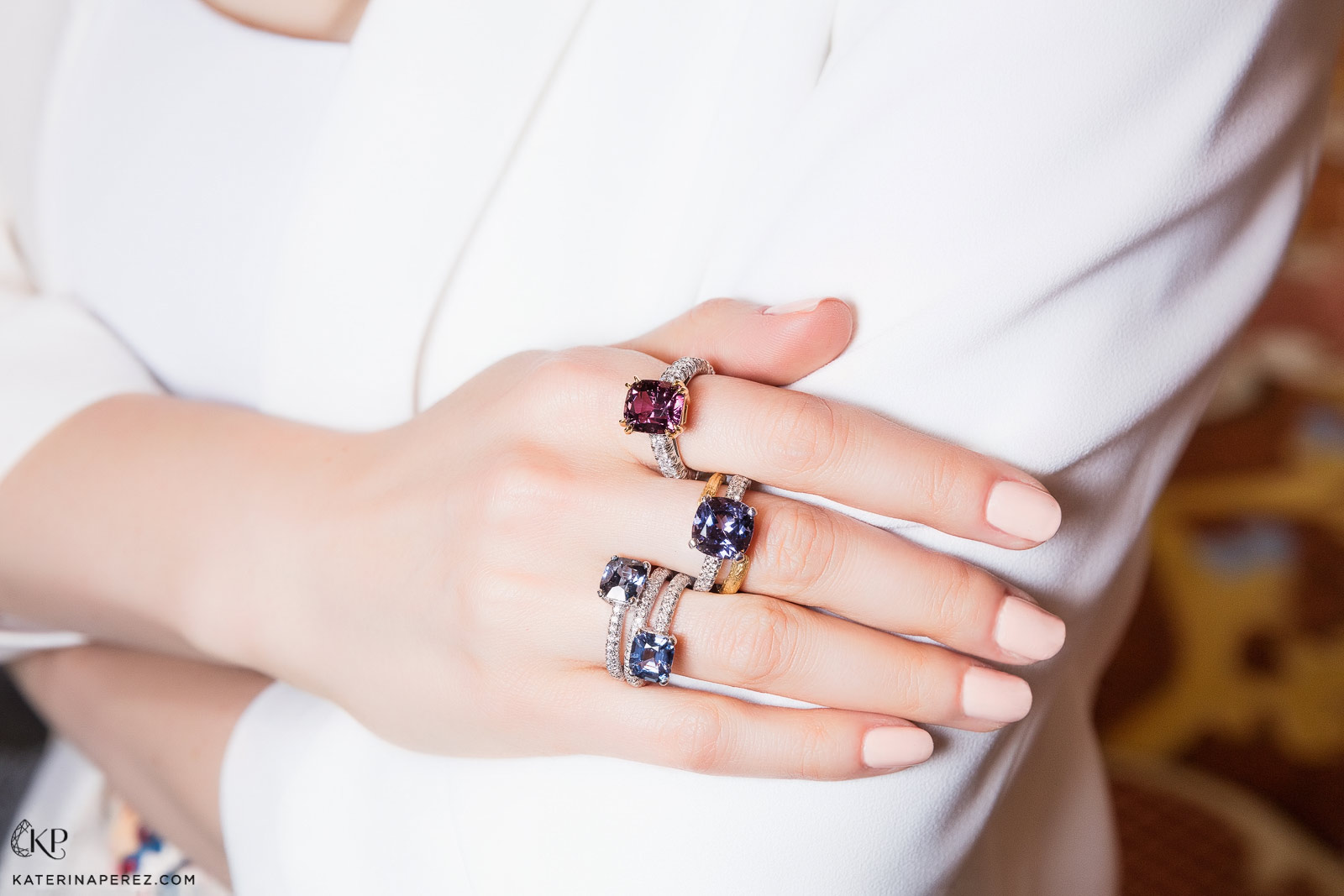 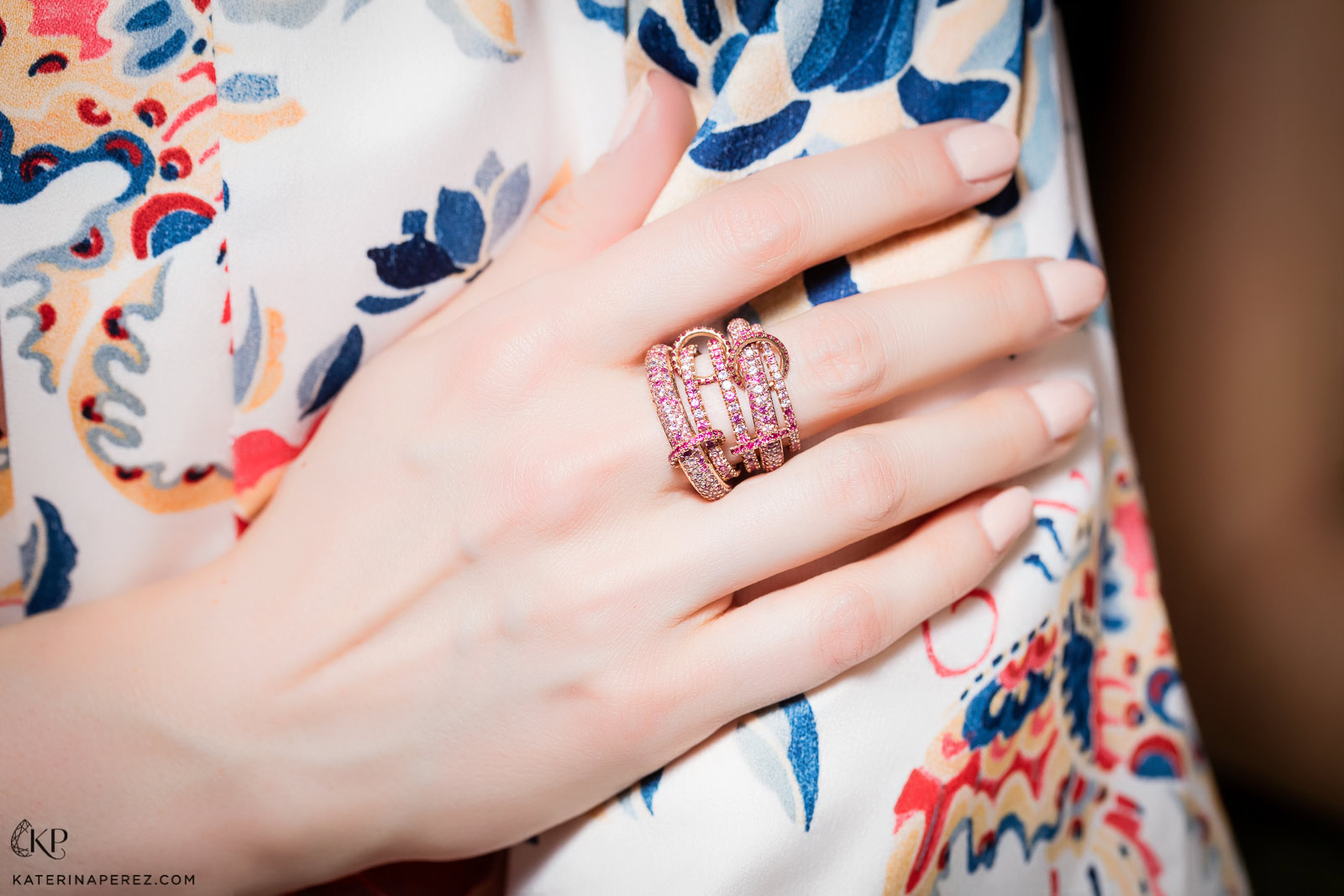 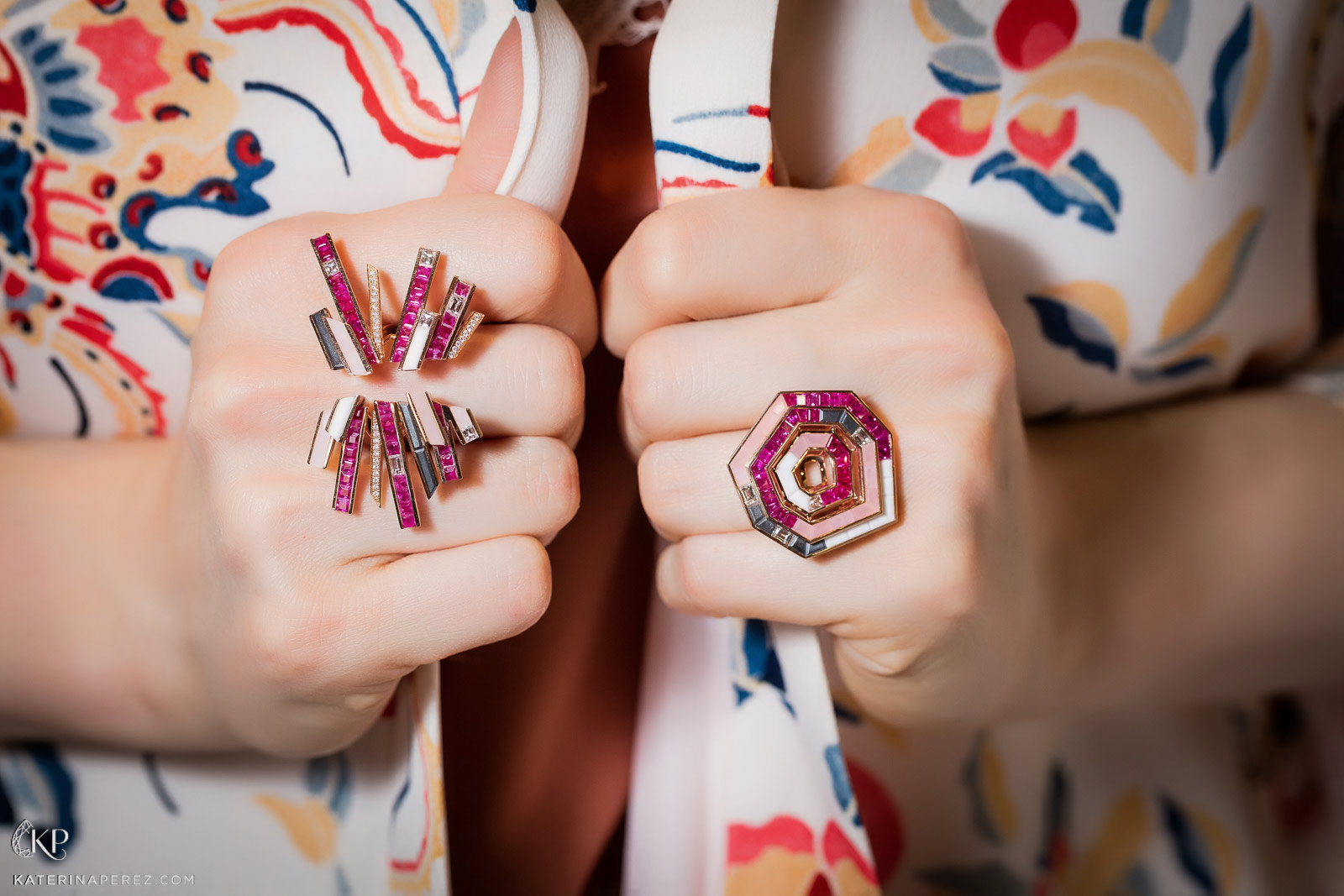