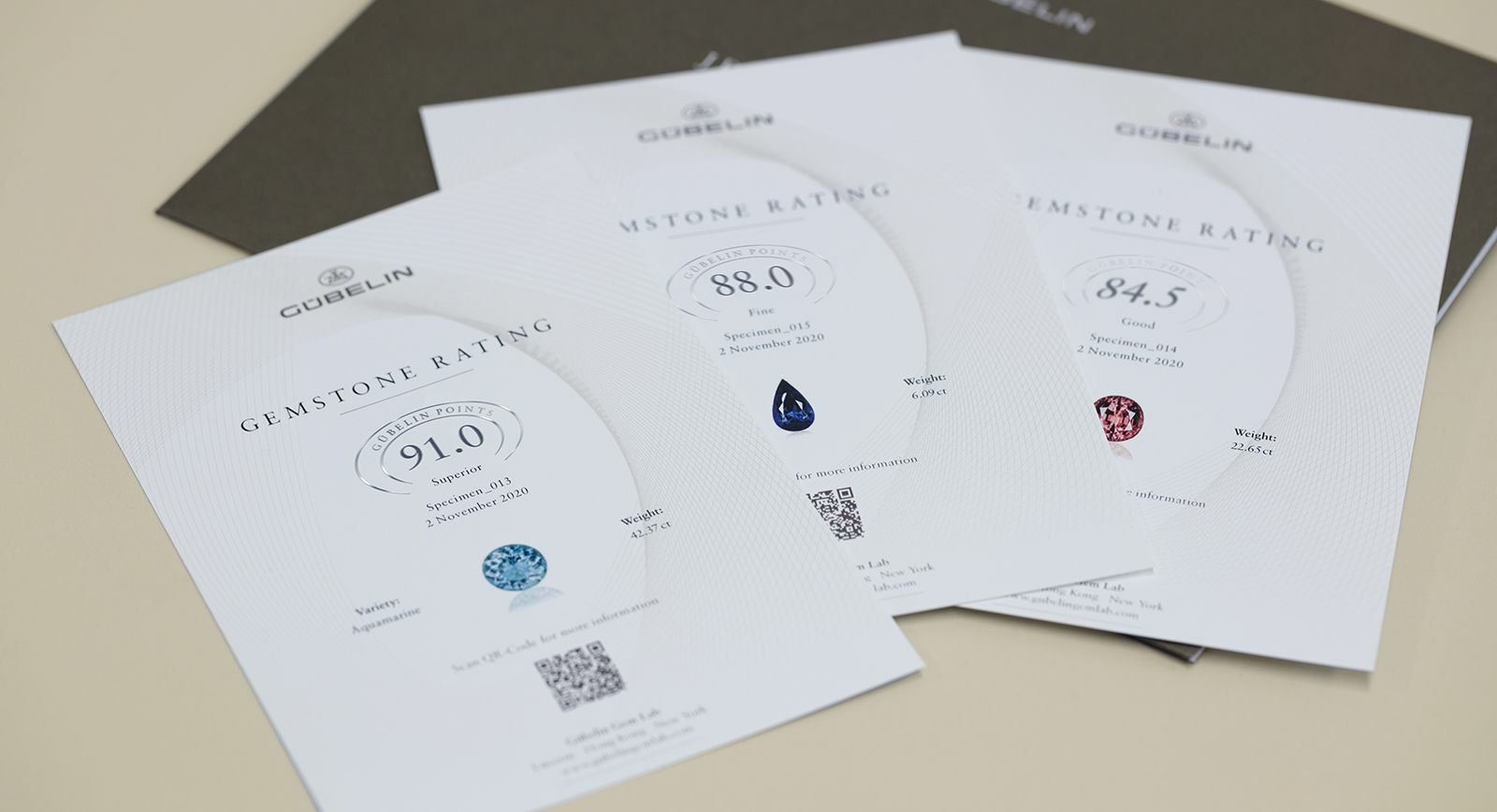 Gübelin: Is Gemstone Rating Set to be the Common Certification System for Coloured Gems?

The Gübelin Gem Lab has introduced the Gübelin Gemstone Rating, which gives significant stones a point score based on three factors: quality, rarity and salience. Its goal is to create a common language to uniformly assess coloured gems, and while some are open to the idea of a universal framework, others are reserving judgment. I spoke to Raphael Gübelin, President of the House of Gübelin, to find out more and bring you the essential information.

When assessing the value and aesthetic beauty of a diamond there’s a clear system to follow: the 4Cs. This widely acknowledged diamond framework assesses the four main factors that contribute to a diamond’s fire, life and brilliance, therefore signalling its overall quality. In contrast, coloured gemstones have never been bought or sold with such a system in place, which means beauty, quality, attractiveness and other value factors have been based on dozens of factors and are often in the eye of the beholder. To try and change this, the Gübelin Gem Lab – an independent subsidiary of the House of Gübelin – has introduced its Gübelin Gemstone Rating, which gives coloured gemstones a “Gübelin Points” number based on three areas: quality, rarity and salience. Once they’ve undergone an assessment, gemstones will be given a score out of 100 along with a designation: “exceptional” (97.5-100 points), “outstanding” (95.0-97.4 points), “excellent” (92.5-94.9 points), “superior” (90.0-92.4 points), “fine” (85.0-89.9 points), “good” (80.0-84.9 points) or “fair” (75.0-79.9 points). 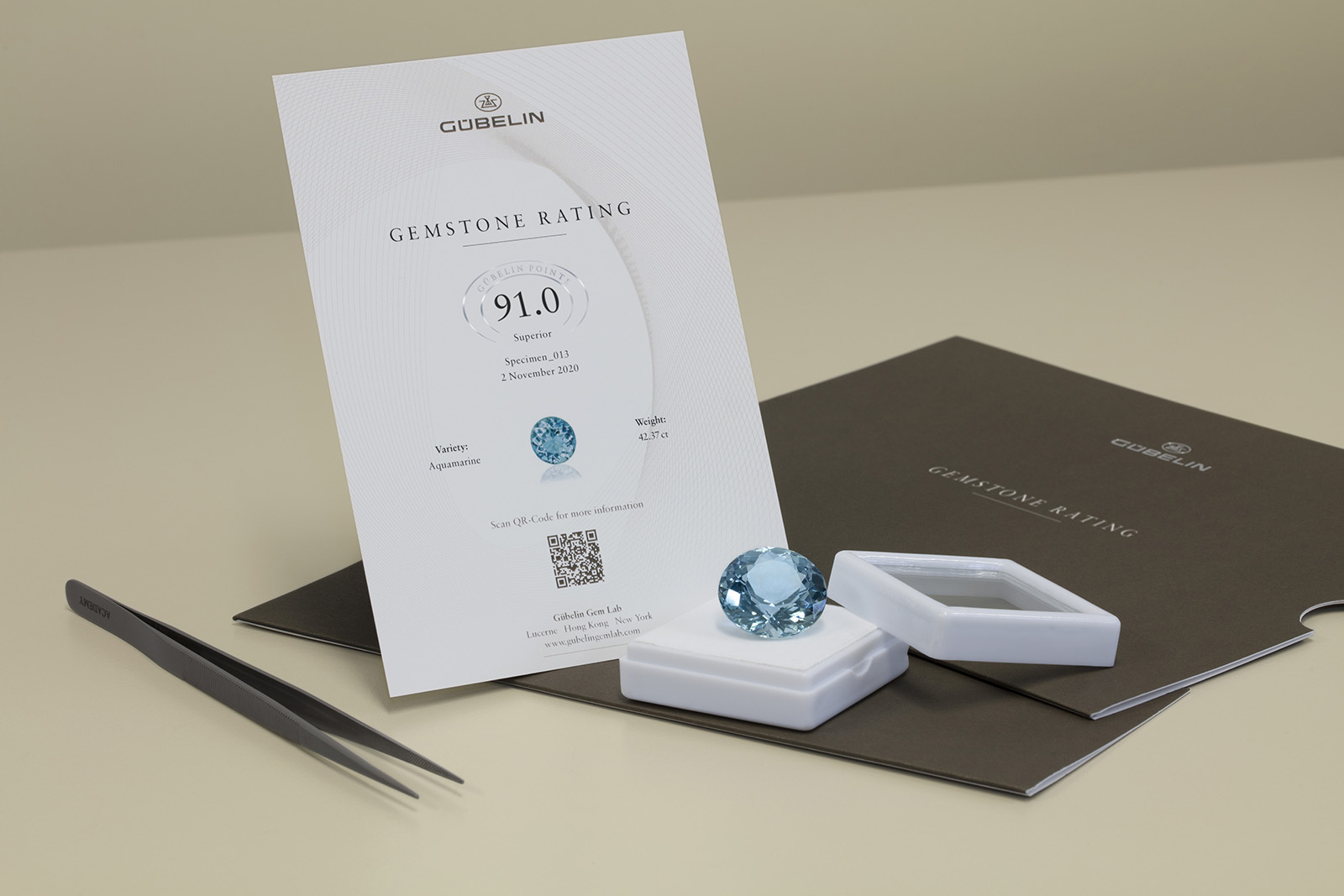 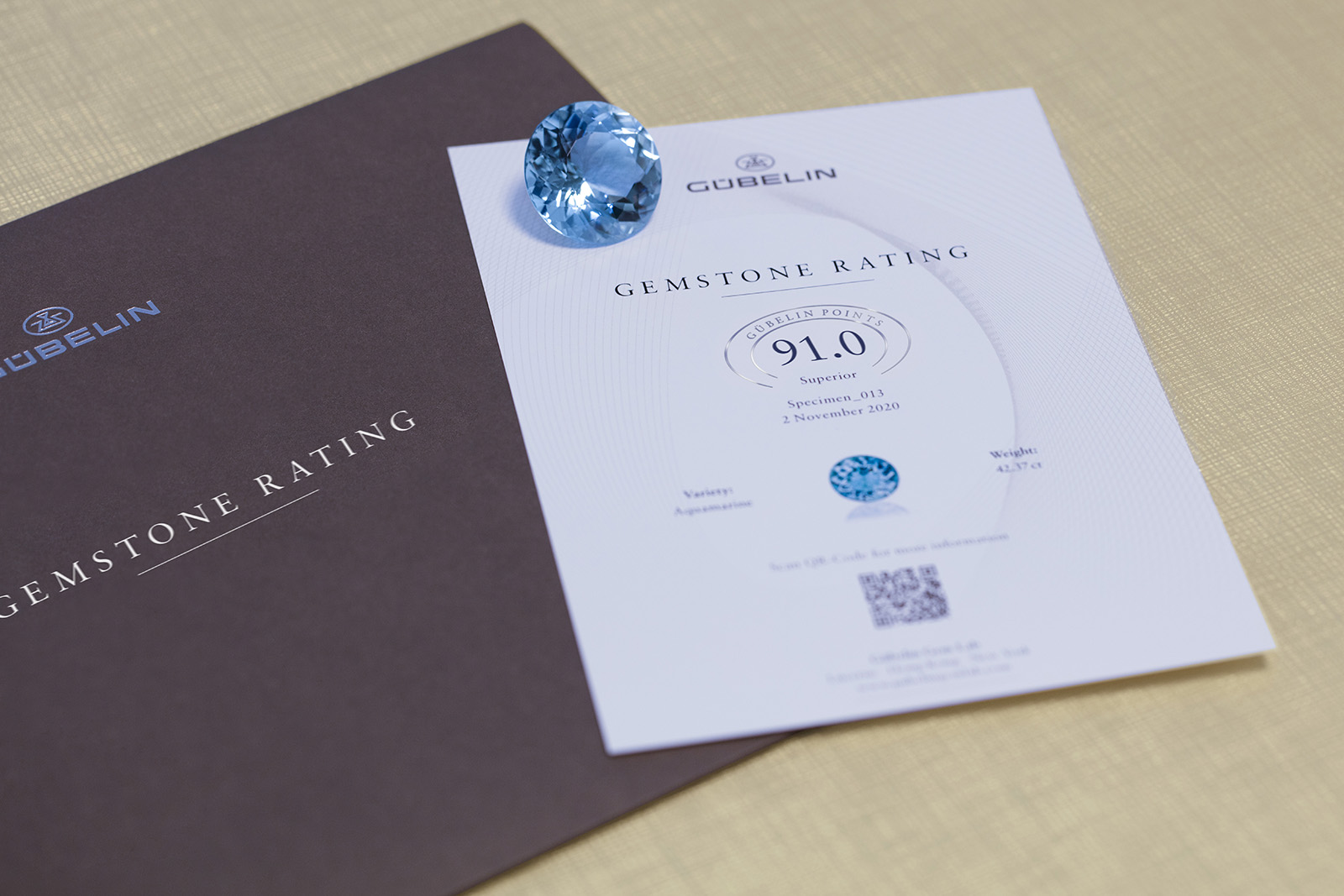 Even for experts with decades of experience, gauging the value of a gemstone is a challenge. That’s why the Gübelin Gemstone Rating has been developed: to try and help jewellery and coloured stone buyers understand what they are buying and how it compares to other stones in a consistent and easy-to-follow way. As Gübelin Gem Lab is not involved in the buying and selling process, its Gemstone Rating is designed to orient the market around a common system and empower jewellery and gemstone buyers to make their own, more informed decisions. After all, buying coloured gems is not a simple or quick decision when taking into account the array of factors in play. Imagine, for example, buying a piece at auction and discovering a Gübelin Gemstone Rating associated with the most sensational blue sapphire, ruby or emerald. This could help you have a better understanding of the stone if you won’t have the opportunity to judge it in person. 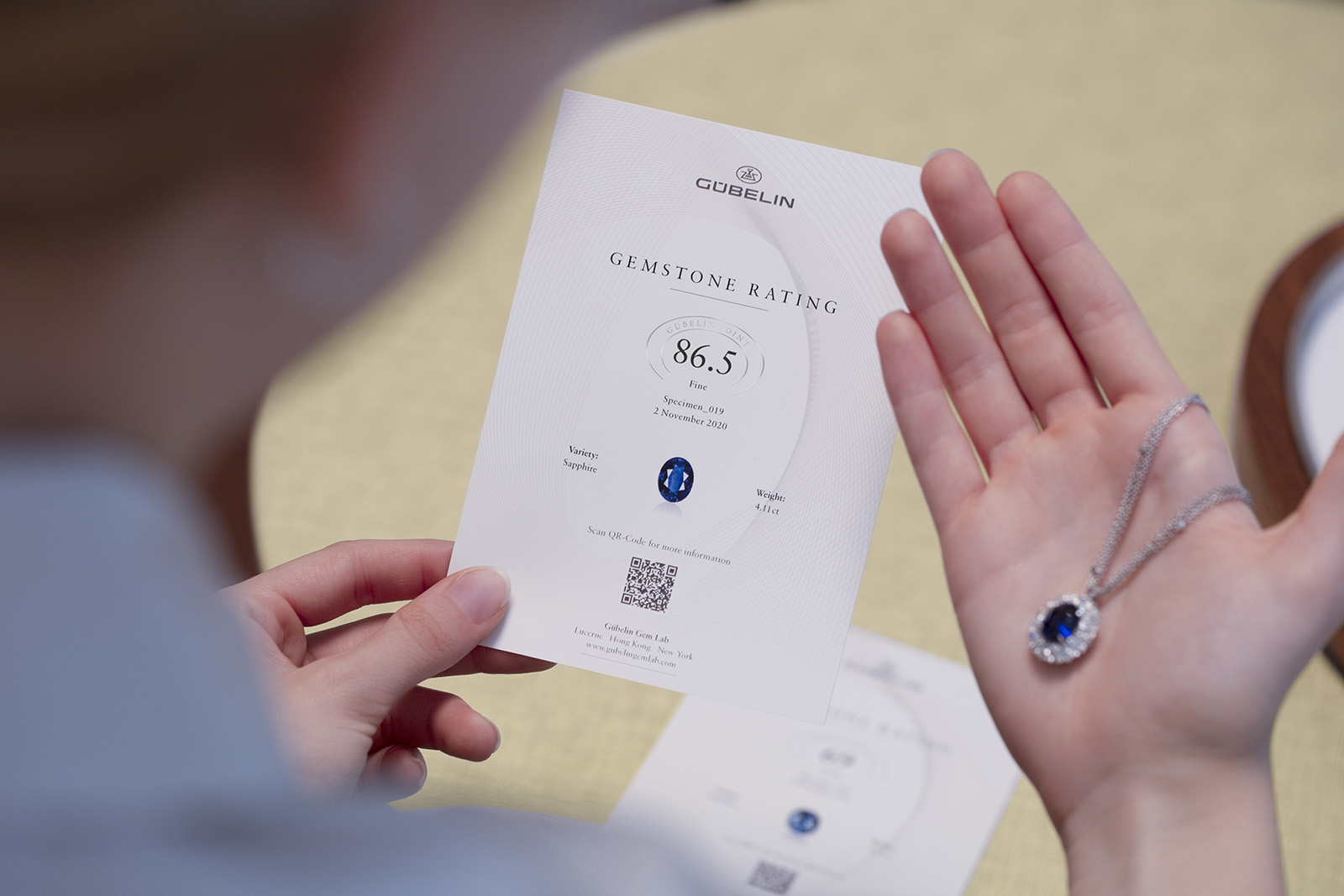 Raphael Gübelin told me: “By nature, the world of coloured gemstones is highly complex. There are dozens of mineral species, hundreds of varieties, all imaginable hues and shades of colour and a vast range of different gemmological and aesthetic traits and qualities. Moreover, treatments and origins multiply the complexity, as do gemmological phenomenon and certain local and regional preferences.”

How does it work?

Gübelin chose a points system to mirror the world of fine wine, which has long used a comparable system to elevate one bottle from the next. The Gübelin Gem Lab takes into account a whole array of factors and condenses them into one number – or a final score - between 75 and 100. Only gems that reach a minimum of 75 points qualify for the rating. The most important factor is Quality, which considers visual aspects such as colour, clarity/transparency and cut. Rarity includes the type of gemstone, how common it is in the market, its carat weight, as well as any treatments it has undergone. The third and final factor, Salience, is the one that has got people talking because it describes the uniqueness of a coloured gem and its ability to stand out from the crowd. Can you put a number on a gem’s star power? A gemstone that speaks to me and captures my imagination may not have the same effect on another person… isn’t this what makes gemstones so magical? 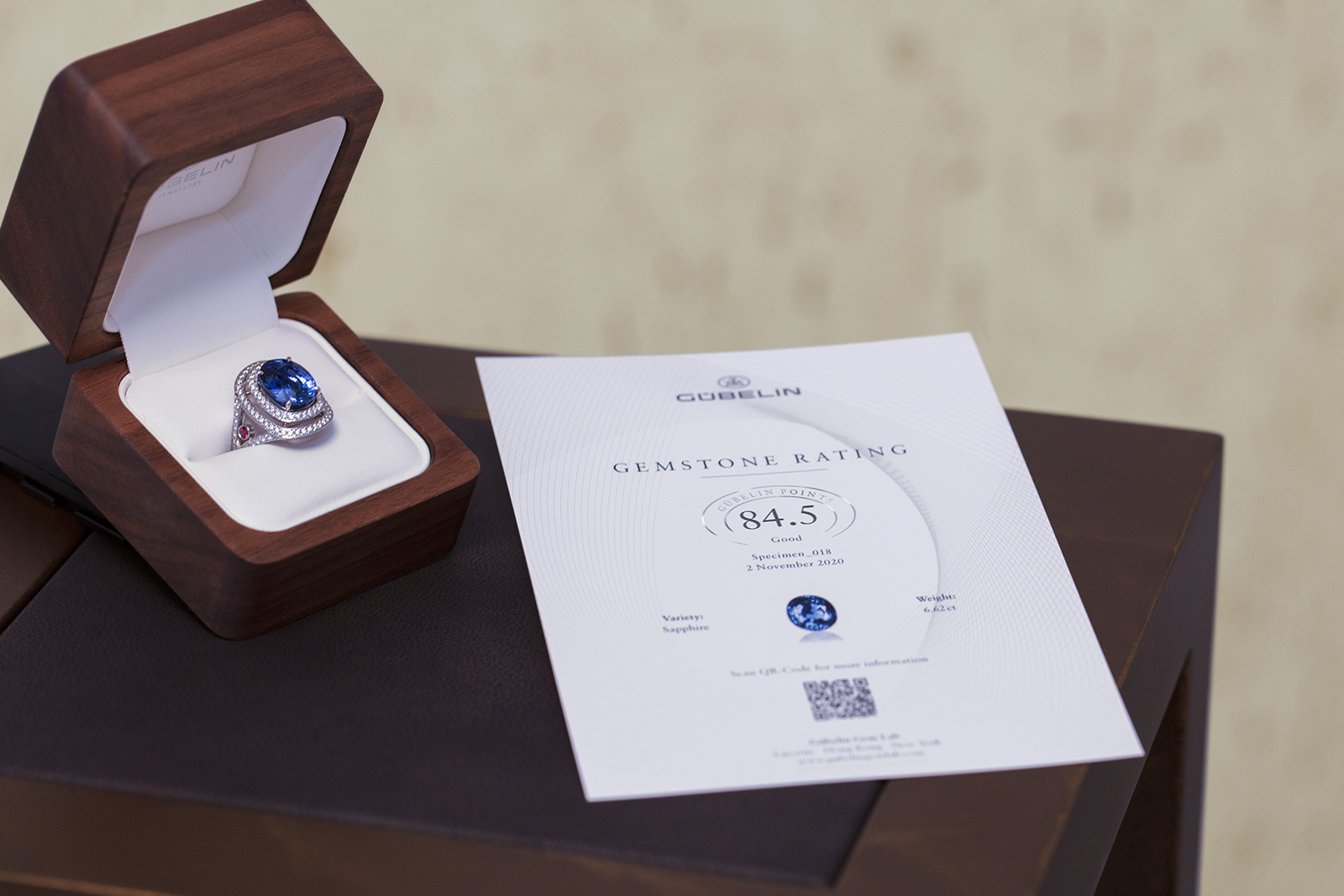 “Compared to quality and rarity, salience is the parameter with the least quantitative or scientific base,” explains Raphael. “It contains an element of subjectivity, but it is based on common perception. When defining the quality criteria, we realised that some gems show properties that are not exactly matching the parameters of a defined ideal but are highly attractive. And there are some gems that fit well to what is considered as to be ideal, but they lack charm or appeal. There seems to be a common consensus among gem connoisseurs about which gemstones – beyond the objective quality criteria – are highly attractive and “talk to them”. This shared perception made us introducing salience. It allows, for example, to compensate for the lower transparency rating that the typical Kashmiri sapphire with a velvety appearance will get. Or for the lower rating for colour homogeneity in the most beautiful padparadschas that typically show a slightly uneven colour distribution. It also allows us to compensate for a stone that ranks high in the more objective parameters addressed in the quality and rarity domains but lack appeal. Salience might be subjective to a certain extent, but it is not random.” 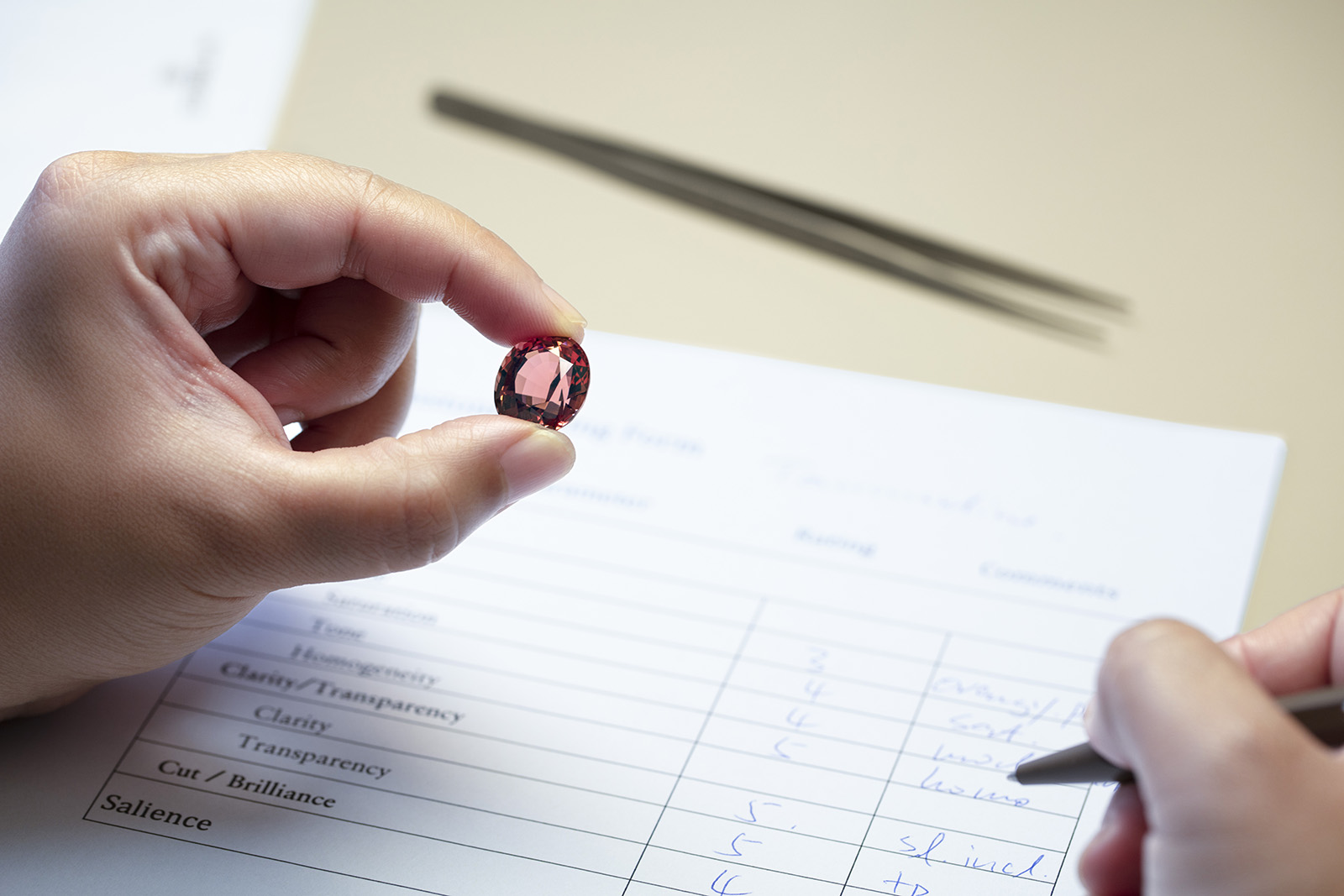 Both Gübelin and I believe that beauty is in the eye of beholder. While it is impossible to tell a person what they believe to be beautiful, there is a “trade measurable” type of beauty that can be drilled down into a point score for a certain calibre of gemstones. Only stones with a minimum score of 75 points or above are eligible to receive a points rating, however, this doesn’t mean that gems that fall outside of this number system are not valuable, or indeed aesthetically beautiful. Low-value gemstones, commercial qualities, crystals, rough gemstones, translucent to opaque gemstones, stones subjected to heavy treatments and synthetics are also out of scope of the Gemstone Rating, but, again, this does not negate their interesting features, aesthetic beauty or sentimental importance to the person who buys them. 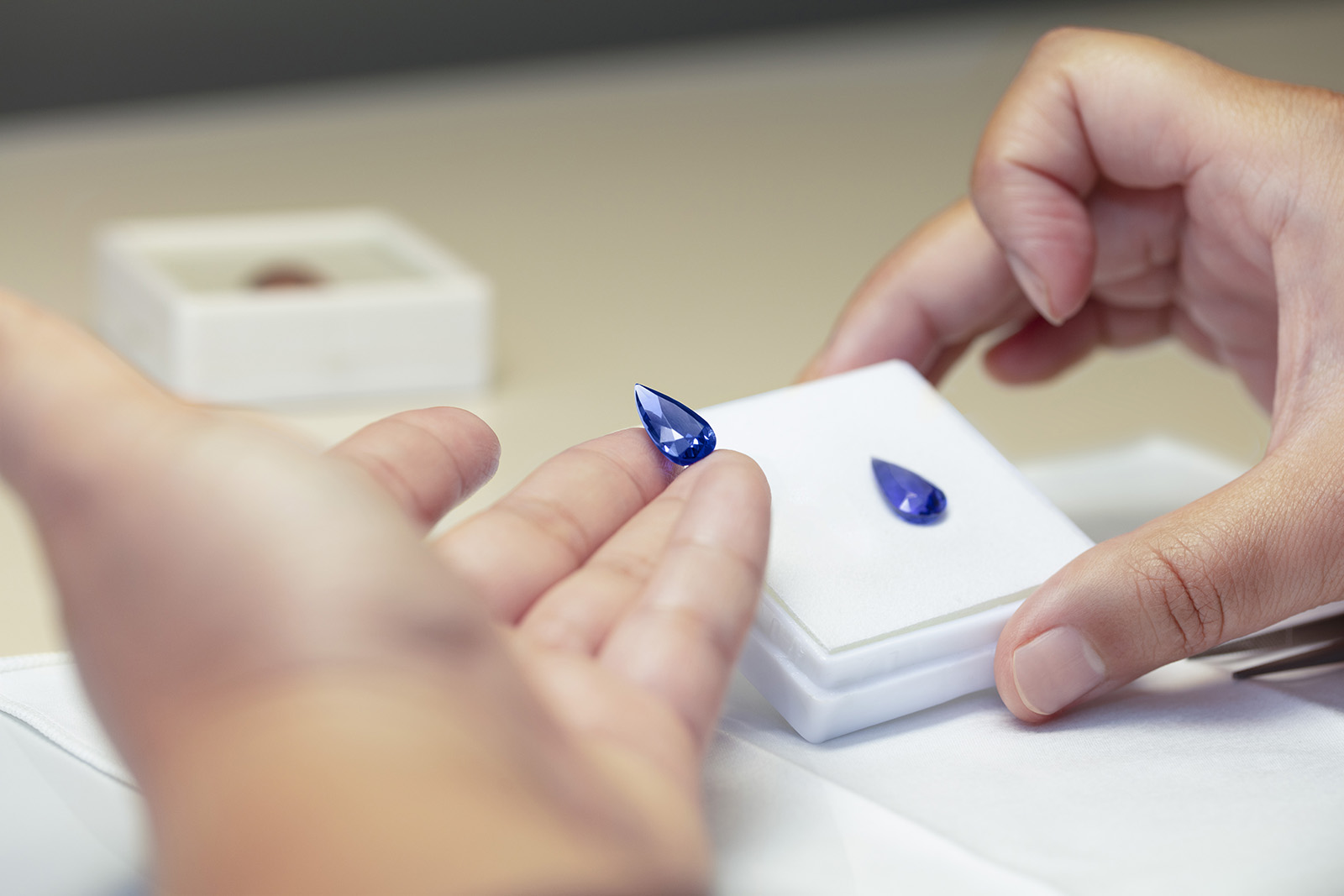 When dealing with such a reduced selection of stones, there are certain agreed upon standards of beauty that can be acknowledged, over and above personal preference. Raphael says: “Our gemstone experts have to follow a strictly standardised procedure, supported by sophisticated tools and software for the assessment and evaluation of each rating criteria. This reduces the risk of a personal preference of the grader to a minimum.” This methodology also means that two coloured gemstones could have the exact same Gübelin Points score but look completely different to the naked eye. Or a pale blue sapphire or pastel emerald could have no rating at all… which doesn’t mean it isn’t beautiful and won’t feature in a spectacular high jewellery creation. It is these factors that make passionate gemstone lovers, like me, curious about the effectiveness of the new Gübelin ratings system.

When browsing through comments on social media, it’s clear there are two opinion camps about the Gübelin Gemstone Rating. Some say this has been a long time coming for coloured gemstones and that buyers will be more confident when choosing gems with a simple, easy to understand numerical score that’s not burdened by the dense scientific gemmological information included on a traditional laboratory report. Others have questioned whether the system is needed at all, and if it is simply a marketing scheme. 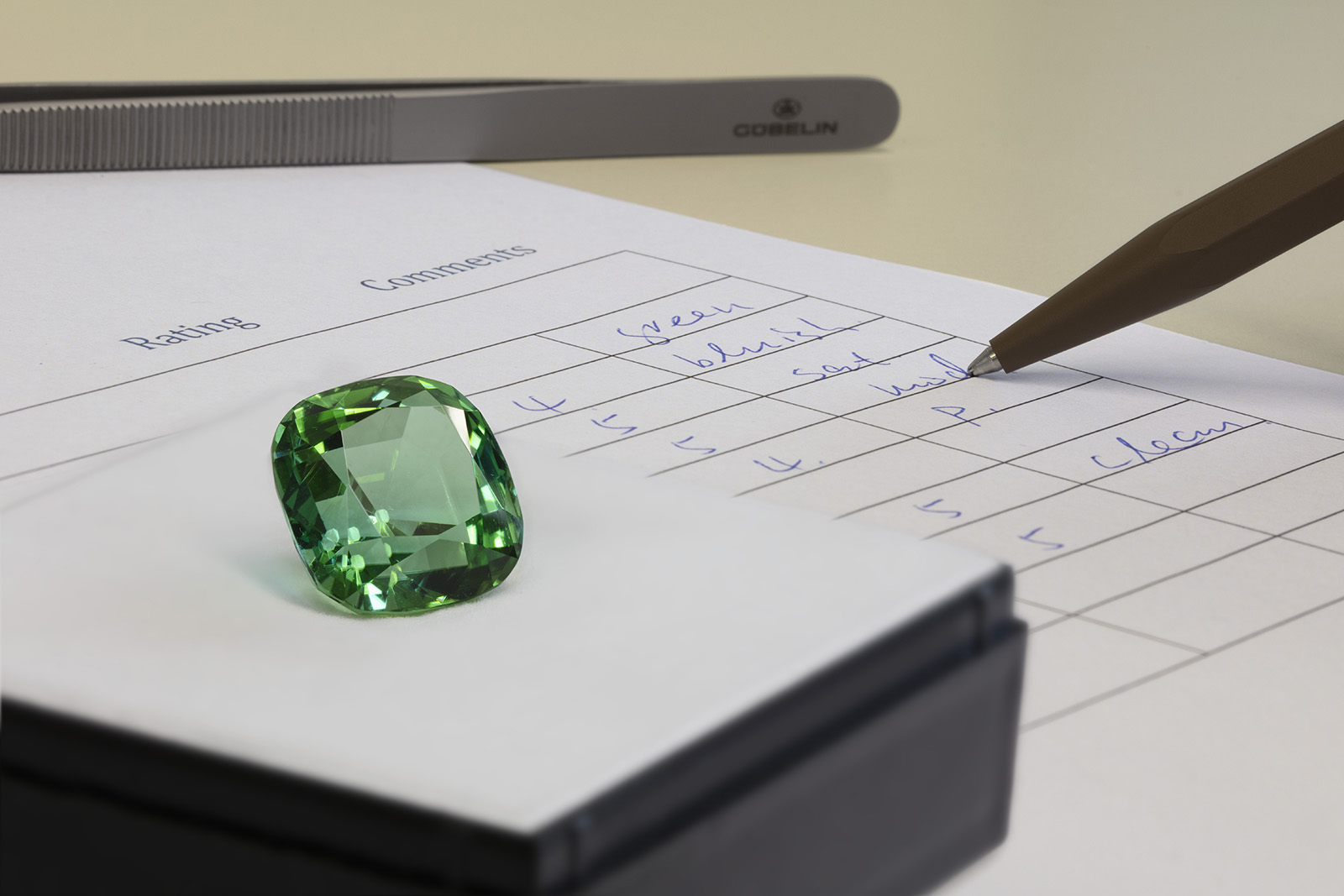 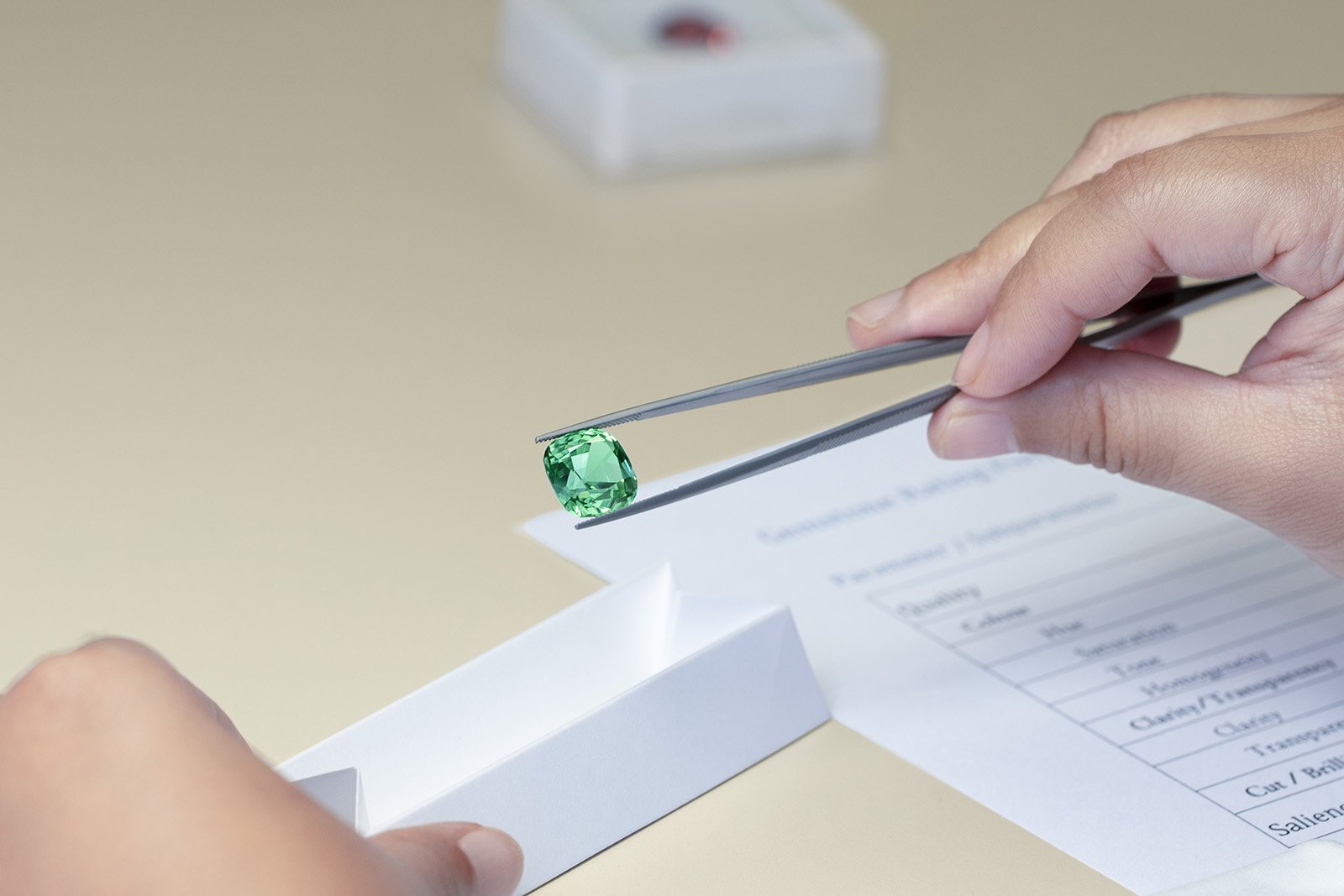 During my conversation with Gübelin, it was clear that this latter argument doesn’t hold up because there is nothing compulsory about the concept; those wishing to have a gemmological report and nothing else can continue to do so, and those who wish to receive a rating without a report (perhaps a stone already has a report from a different gem lab) can secure this. To bring more recognition to the rating, every gemmological report from the Gübelin Gem Lab will include a Gemstone Rating free of charge (instead of the regular price of 100 CHF for a Gemstone Rating in combination with a Gemmological Report) in 2021. A Gemstone Rating on its own costs 250 CHF. Because the Gemstone Rating does not factor in the origin of a gemstone, a complete gemmological report will continue to be required for a complete, 360-degree assessment of a stone. Gübelin Gem Lab also states that a rating on its own is not suitable to “directly deduce buying or selling prices”.

A Benefit for Jewellery & Gem Buyers

Imagine trying to choose between two beautiful high jewellery necklaces. One contains a 10-carat sapphire, the other a 10-carat sapphire with a Gübelin Gemstone Rating of 95… which one would you buy? This new points-based system could build trust, add value and encourage the purchase of one piece over another. For the trade, a designer looking for an emerald for a bespoke piece could ask their dealer for a small selection of stones with a 90-point score or above, thus reducing the assortment they receive and making finding the right stone easier, especially when nowadays gemstones are often sold online or via Whatsapp. 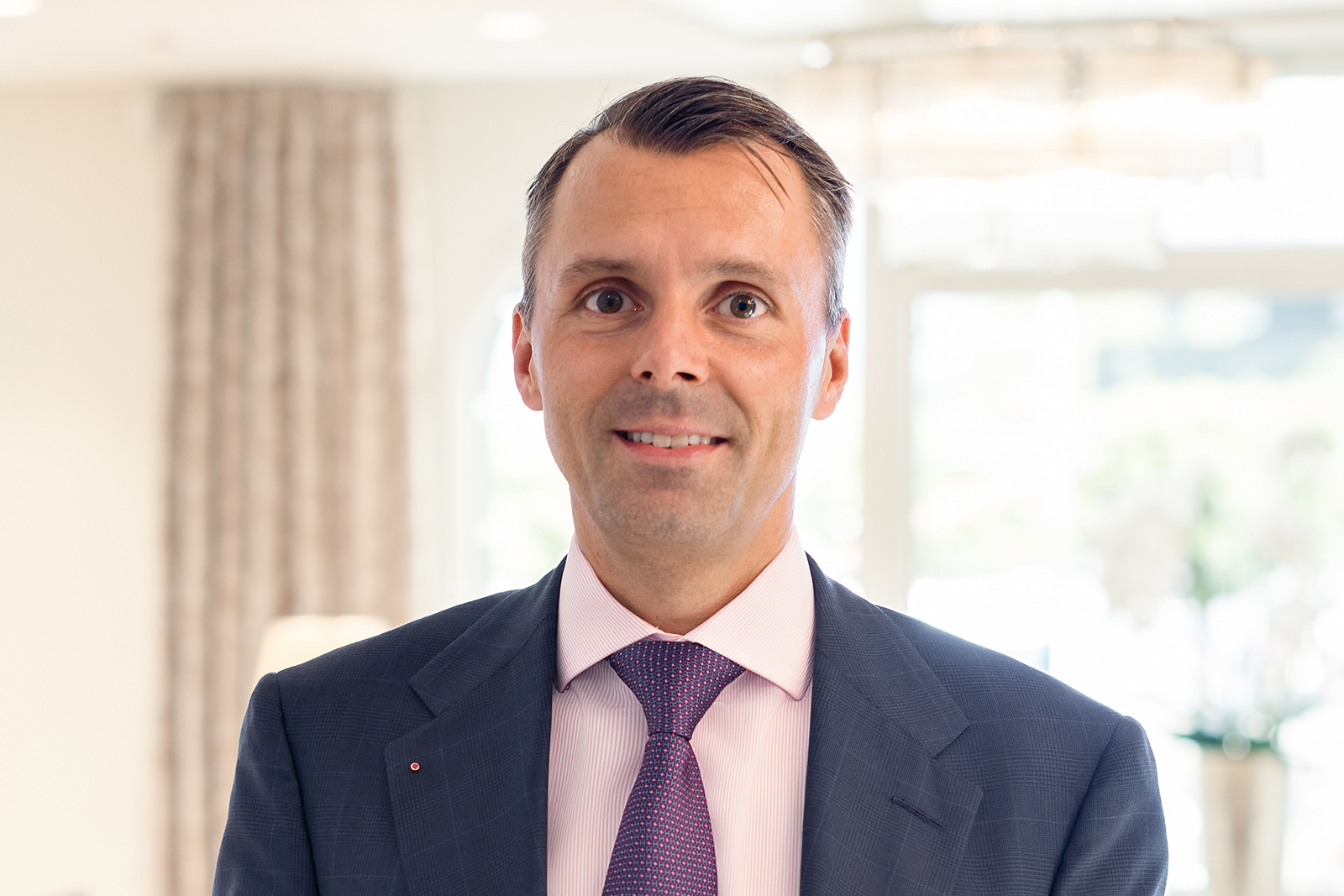 Raphael adds: “The Gübelin Points are a great way to communicate the combination of beauty, rarity and exceptionality of a coloured gemstone – might it be offline or especially online. The trade becomes more and more digital and the rating can provide more information without having the stone in front of you. You can easily filter out the specific gems you are looking for. Think of an auction, but you cannot attend the viewing. Thanks to the Gemstone Rating you can compare the gemstone anyway.”

Could this become a convenient and simple ‘universal language’ for gemstones, or are they simply too diverse, too subjective and too personal to be designated a number? This will be for individuals to decide.

SPECIAL THANKS: GUBELIN FOR SPONSORING THIS ARTICLE