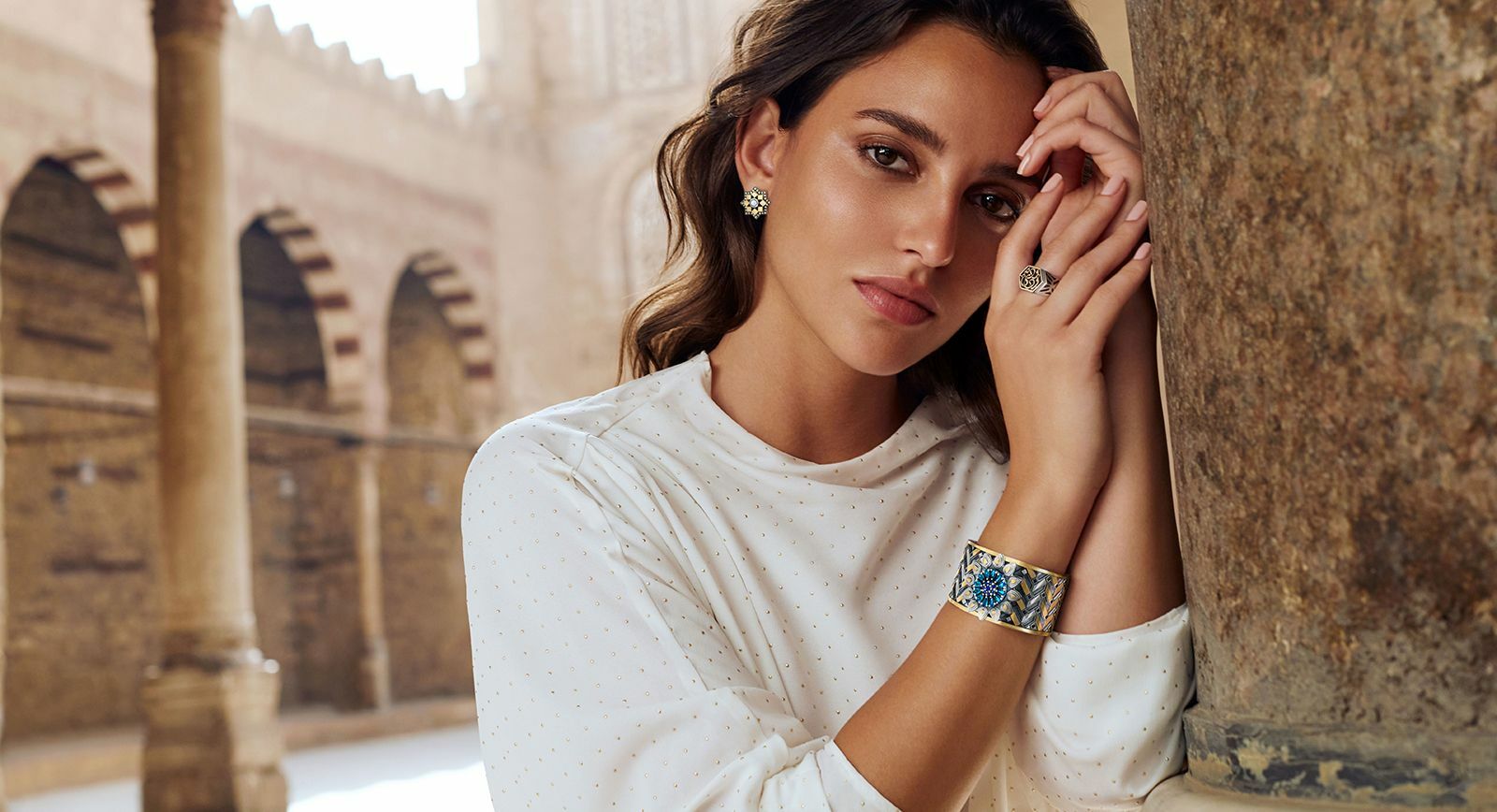 International culture and heritage have been the central focus of the Azza Fahmy brand since it was founded. In this new collection, the chief designer - Azza Fahmy herself - draws particular focus on Cairo, especially during the Mamluk era – a period of immense revival and vitality in Islamic history, between the years of 1258 to 1800. 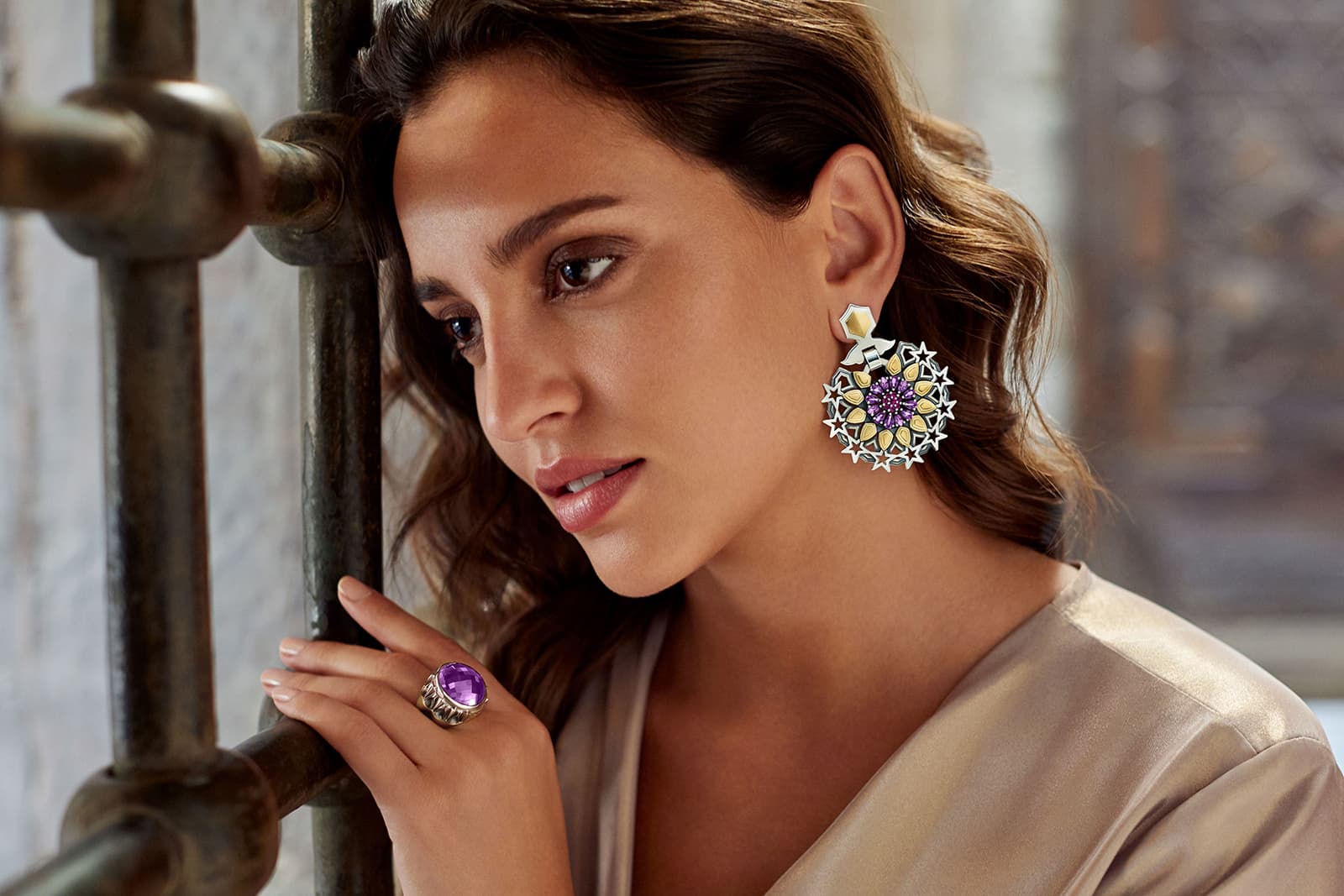 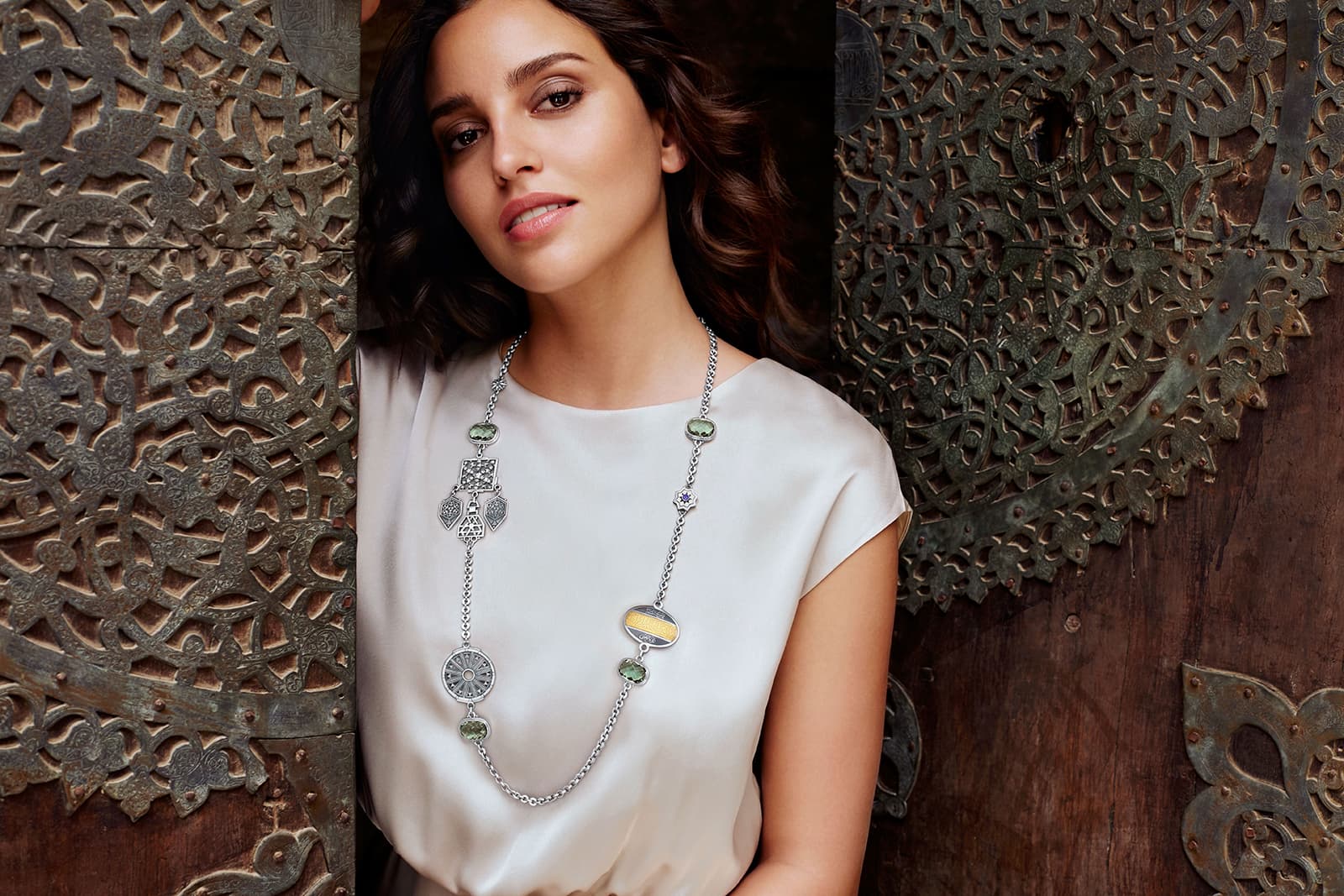 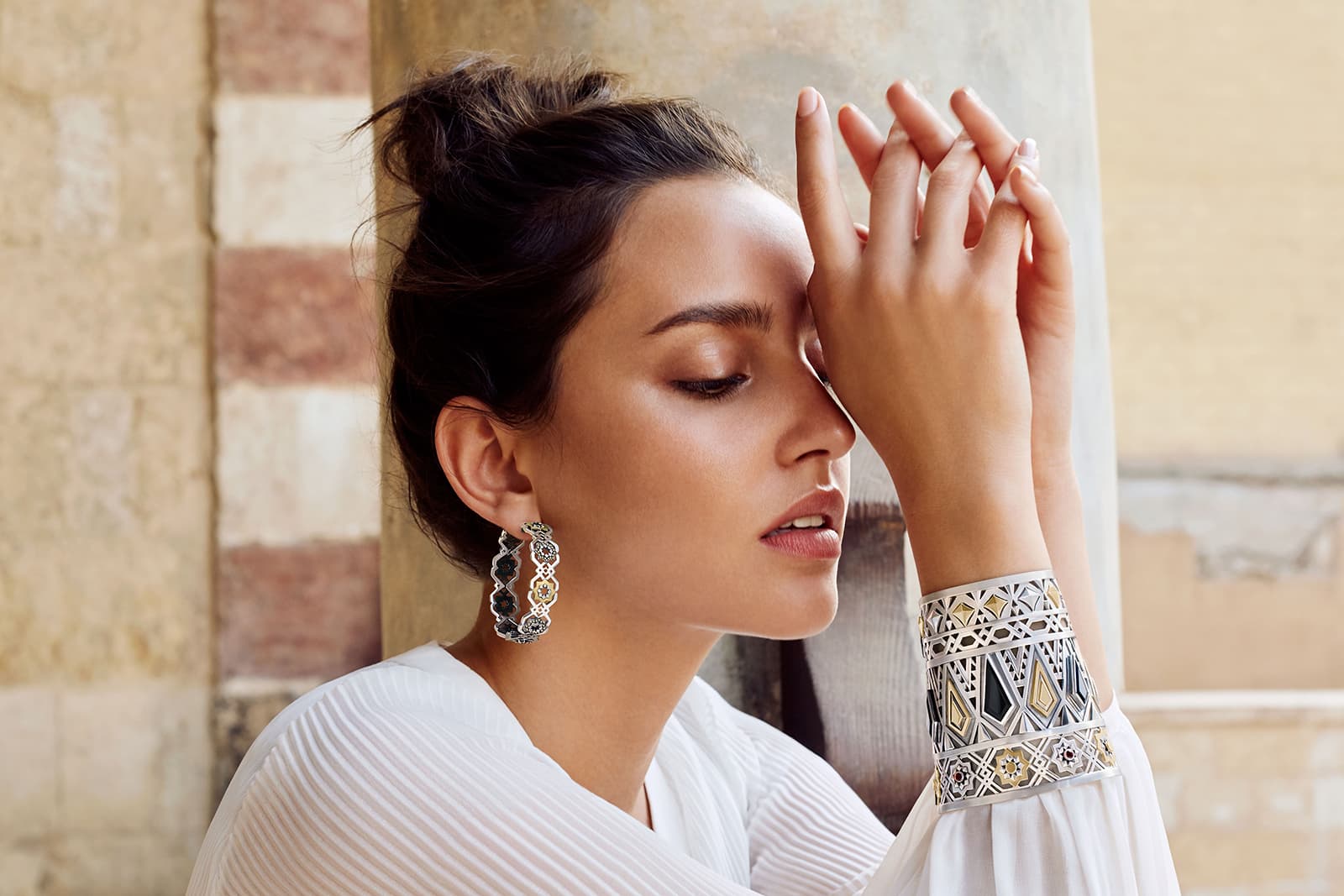 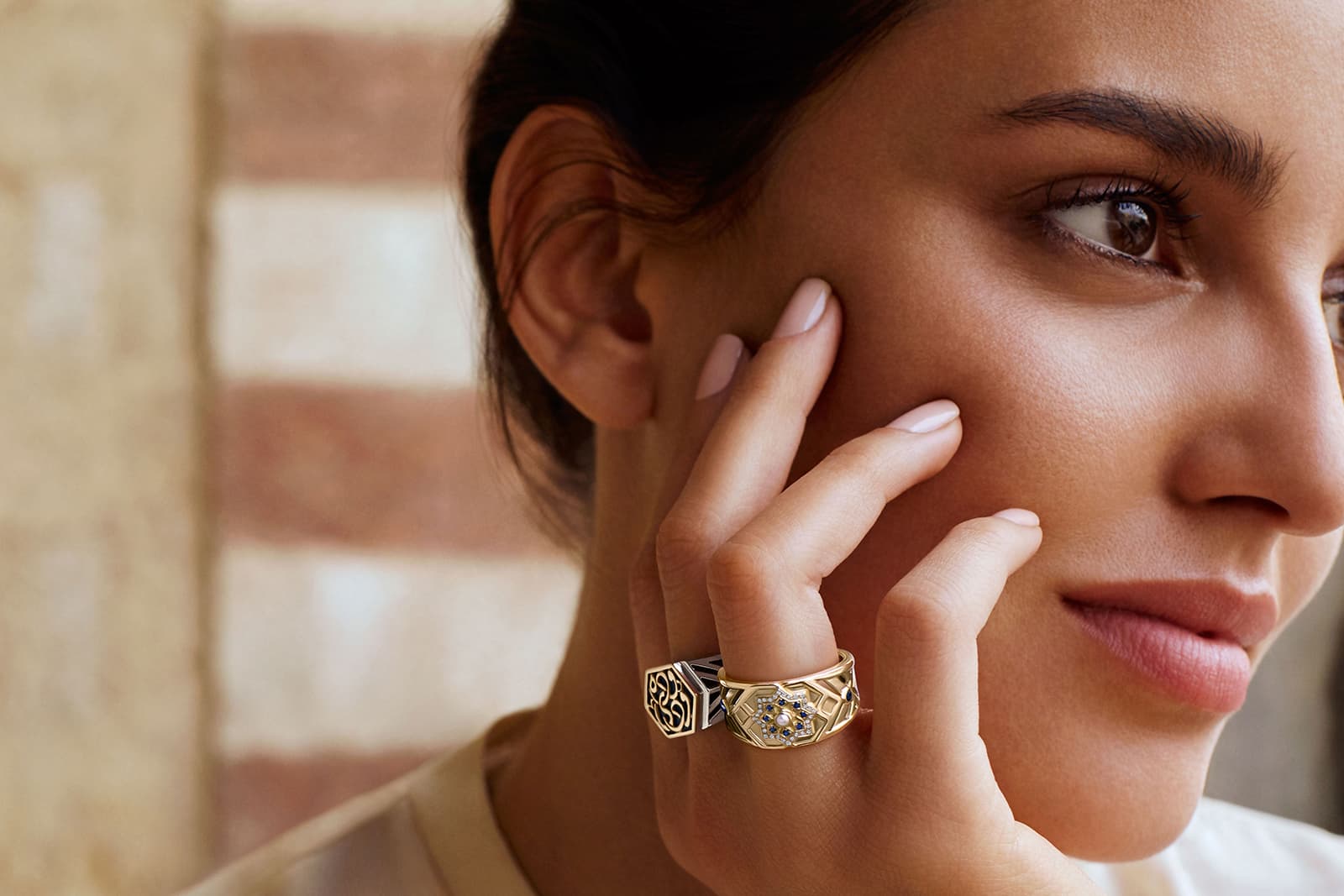 Interestingly, the Azza Fahmy brand’s logo was inspired by the Mamluk Rank, an emblem used by Mamluk sultans to label buildings, tombs and artwork created during the epoch. Very early in her career, Azza became fascinated by a particular emblem with a writing in the Kufic language, because from the window of the jewellery workshop she was working at she could see the dome of a building built in the Mamluk period. She later discovered that it was the dome of one of the most significant buildings of the era –the estate of the seventh Bahri Mamluk Sultan, Al-Mansur Qalawun, who ruled Egypt from 1279 to 1290, and whose complex contains a mausoleum, a madrassah, a mosque and a hospital. 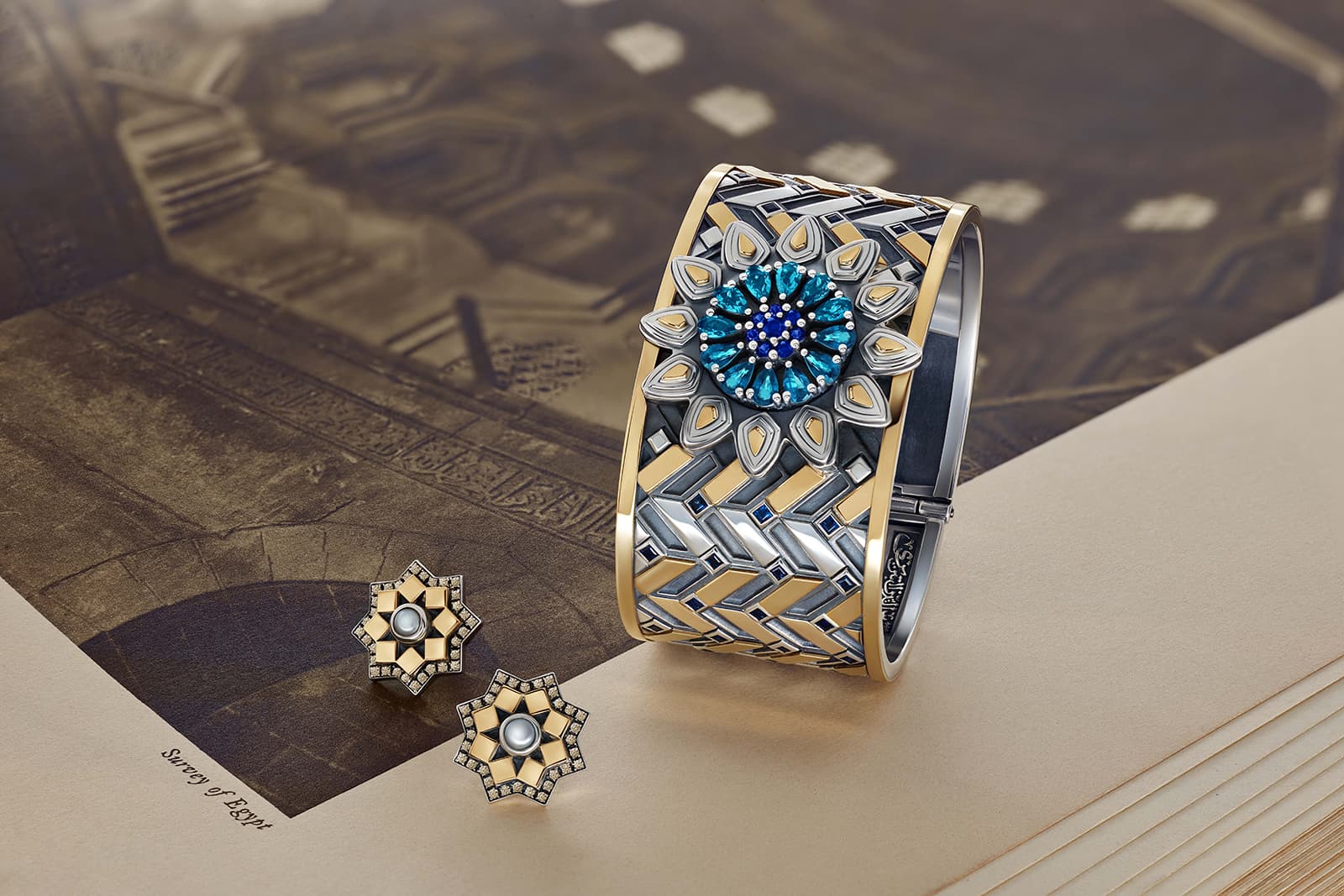 But back to the Mamluk influence on Azza Fahmy. She has many things to say about her latest collection: “This rich collection is designed to raise awareness of the Mamluk era, to glorify its rich but little-known cultural history. I started working on this collection back in 2016, when I met Omniya Abdel Barr, a PhD-qualified researcher in the History of Architecture, who spoke about her initiative, ‘Restoring the Mamluk Minbar’ (a minbar is a portion of the prayer hall with steps), many of which were looted in the course of history. I was asked to create a piece of jewellery to help with the fundraising efforts for this project. It was the beginning of our two-year journey together in research and in design. Did I know then that I would discover a spiritual connection with the era, a strong inspiration that would bring forth the birth of a new collection…?” 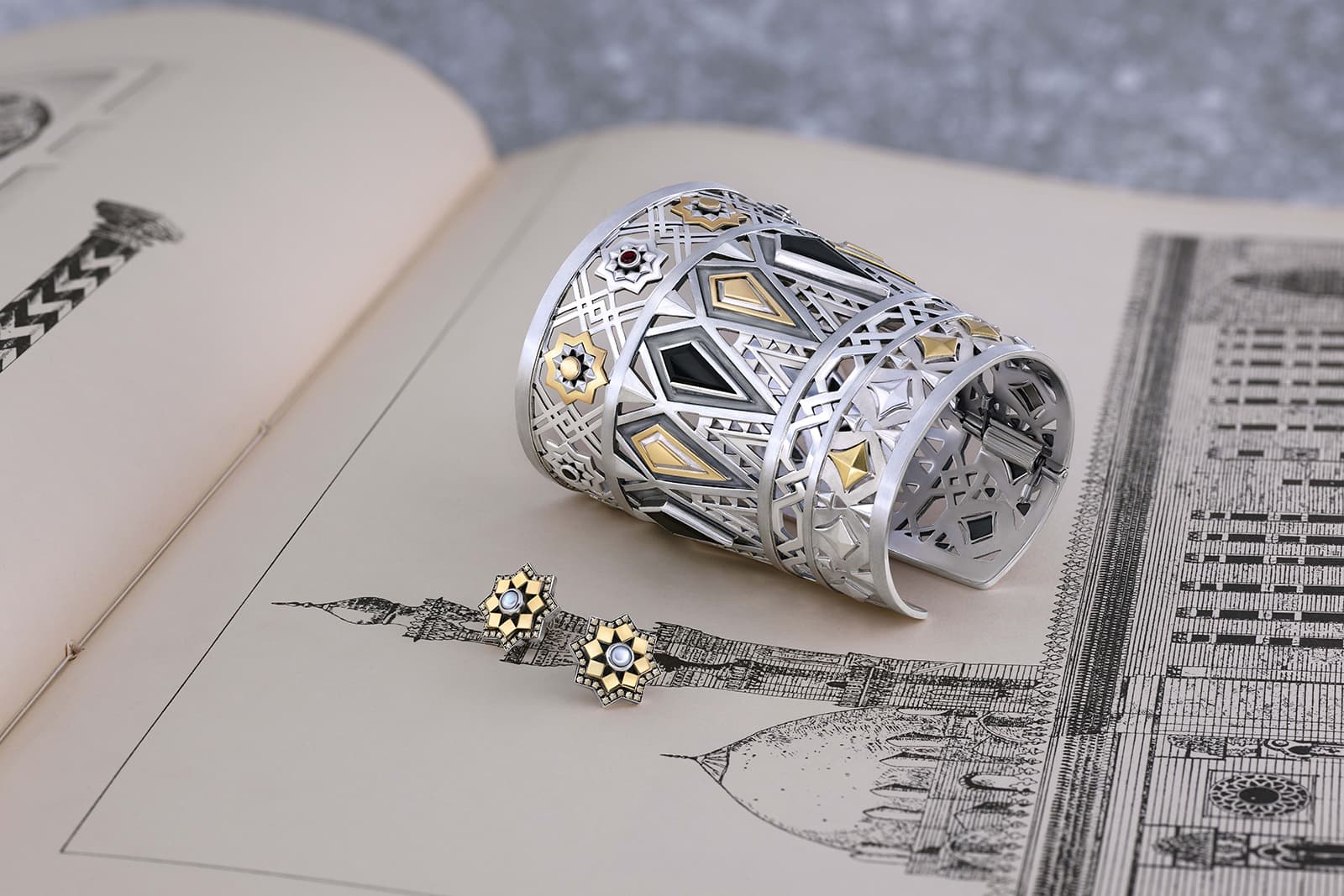 This stunning jewellery line brings together pieces that bear Azza Fahmy’s iconic style and combine 18-carat gold and silver in a single piece. Diamonds, sapphires, rubies, pearls and a handful of semi-precious stones adorn the jewellery and complement the sculpted metal motifs that surely stand out in the dsigns. 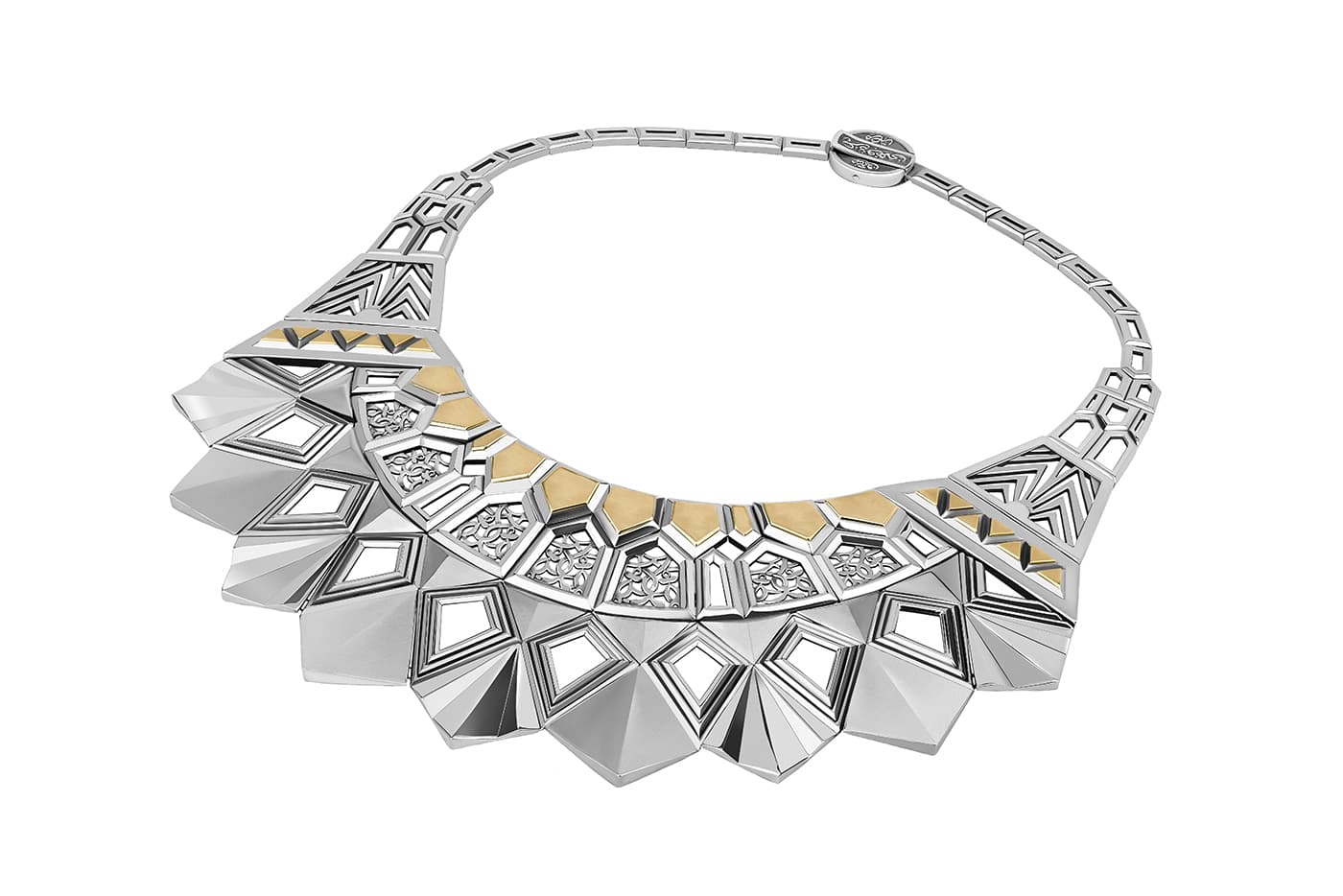 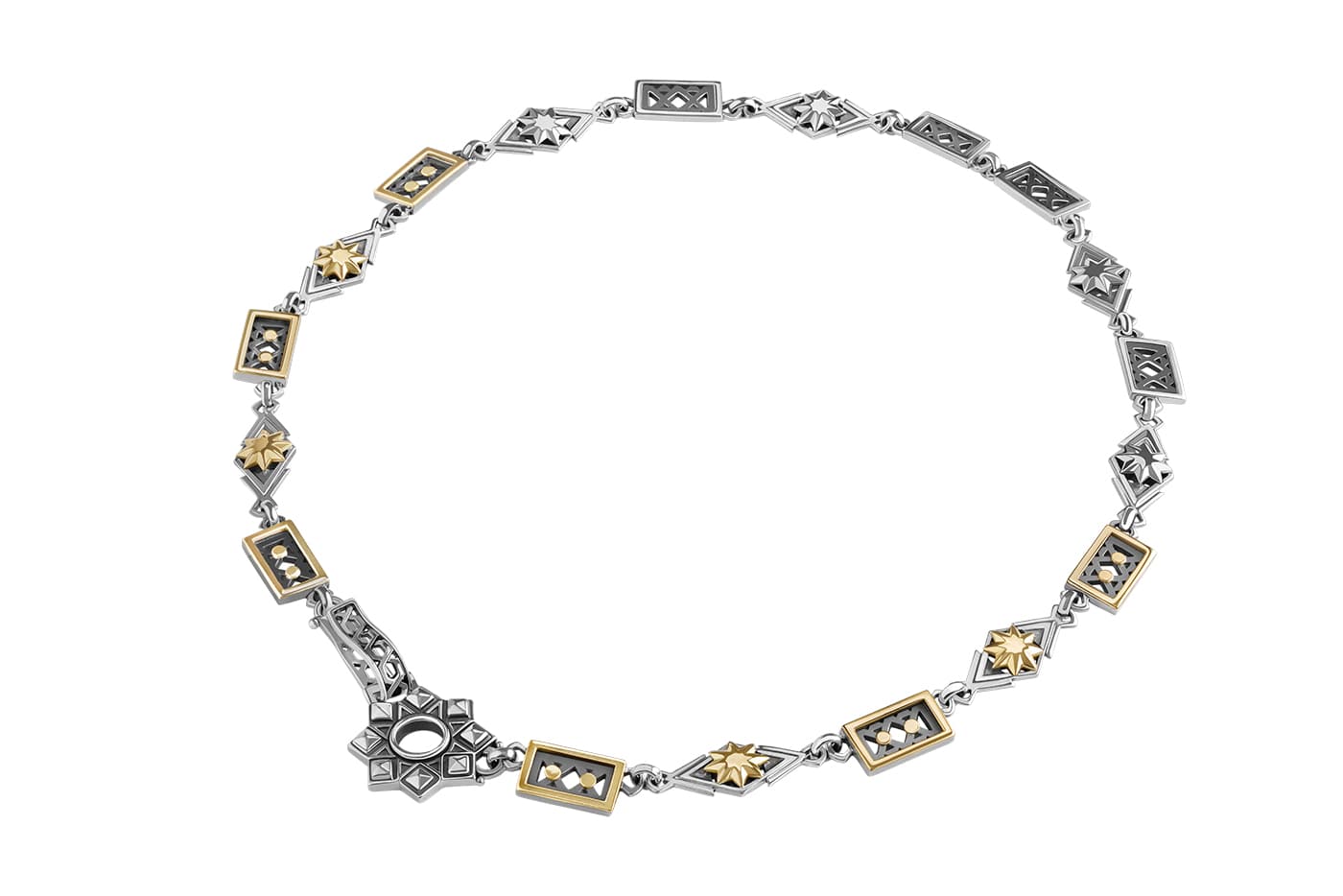 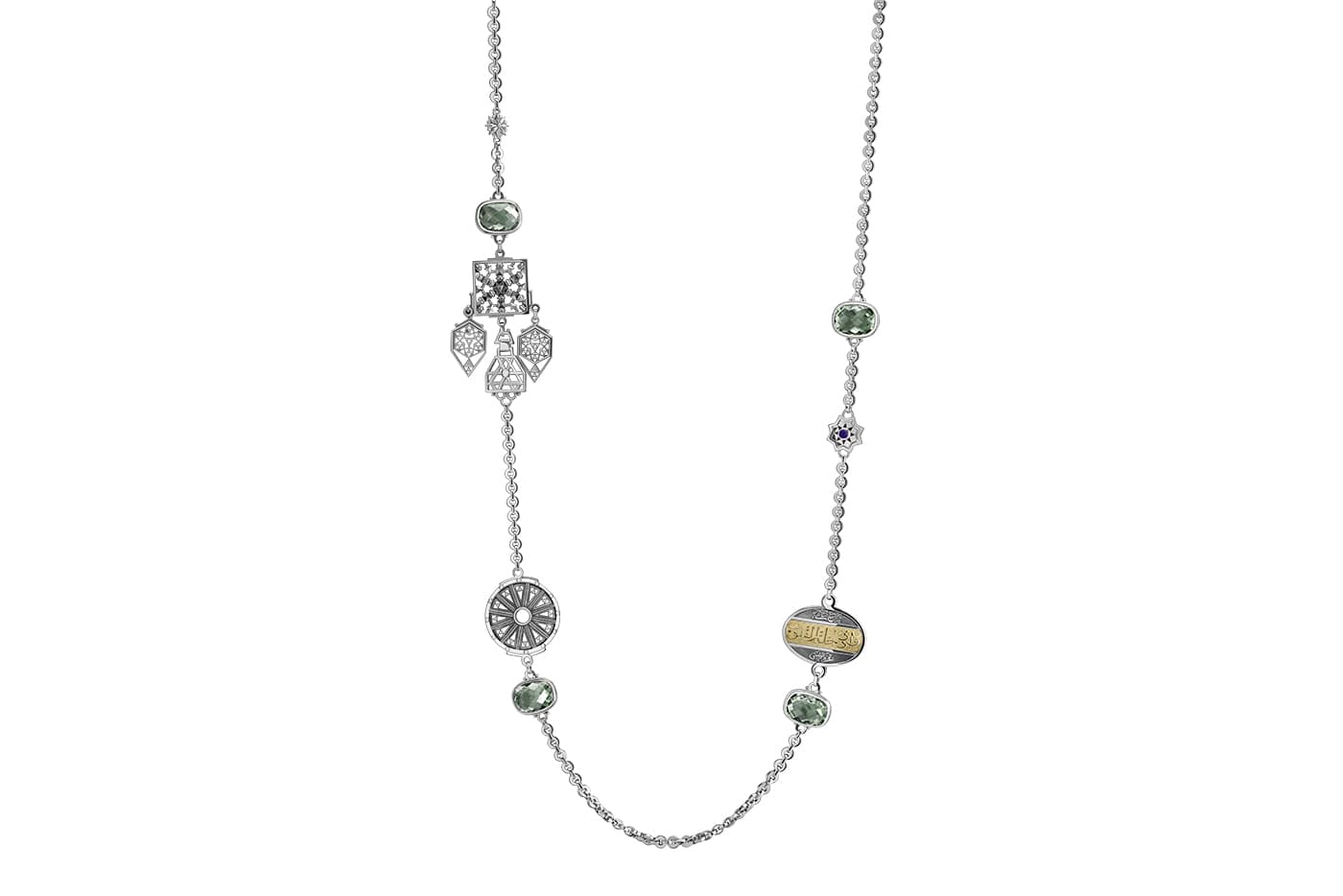 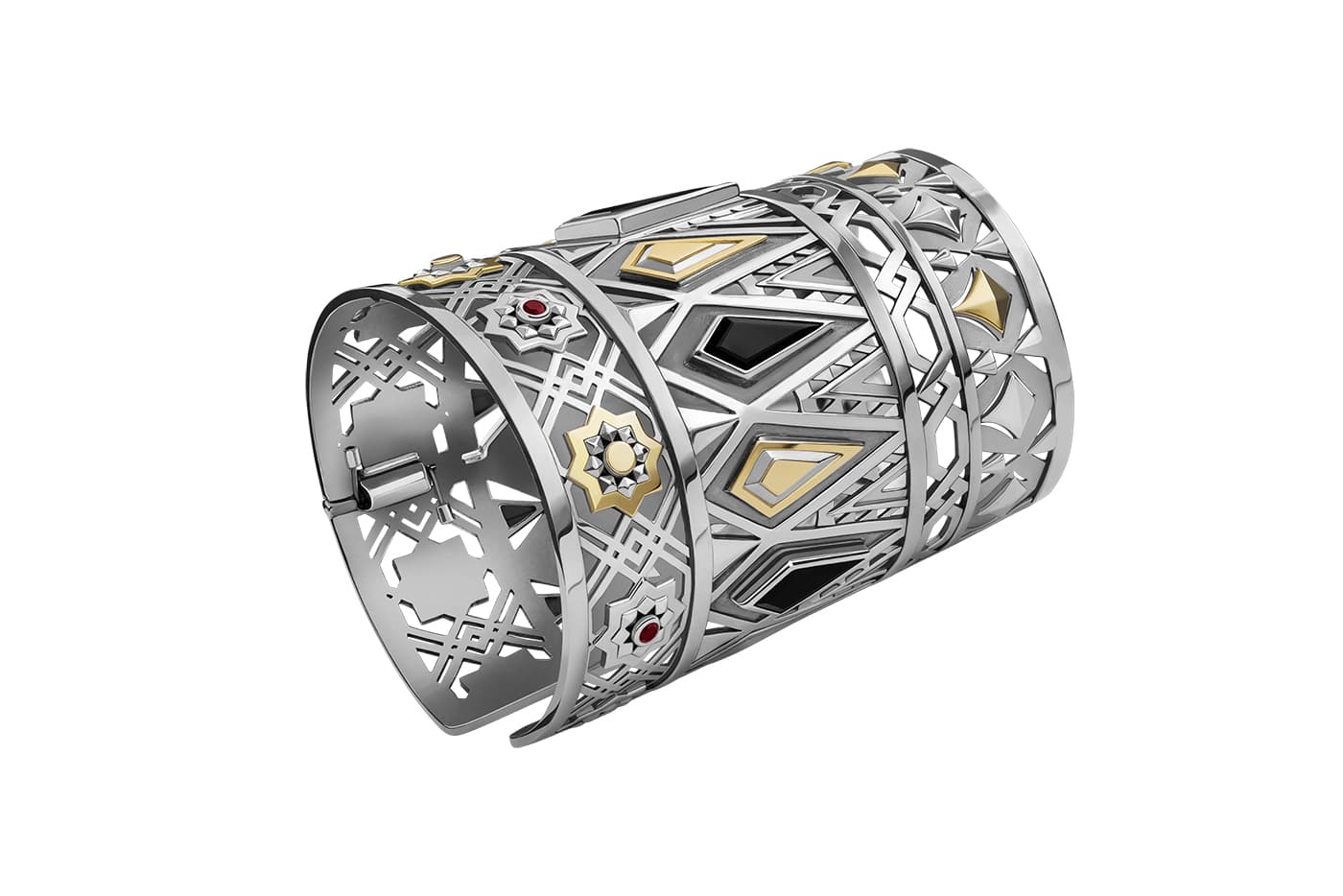 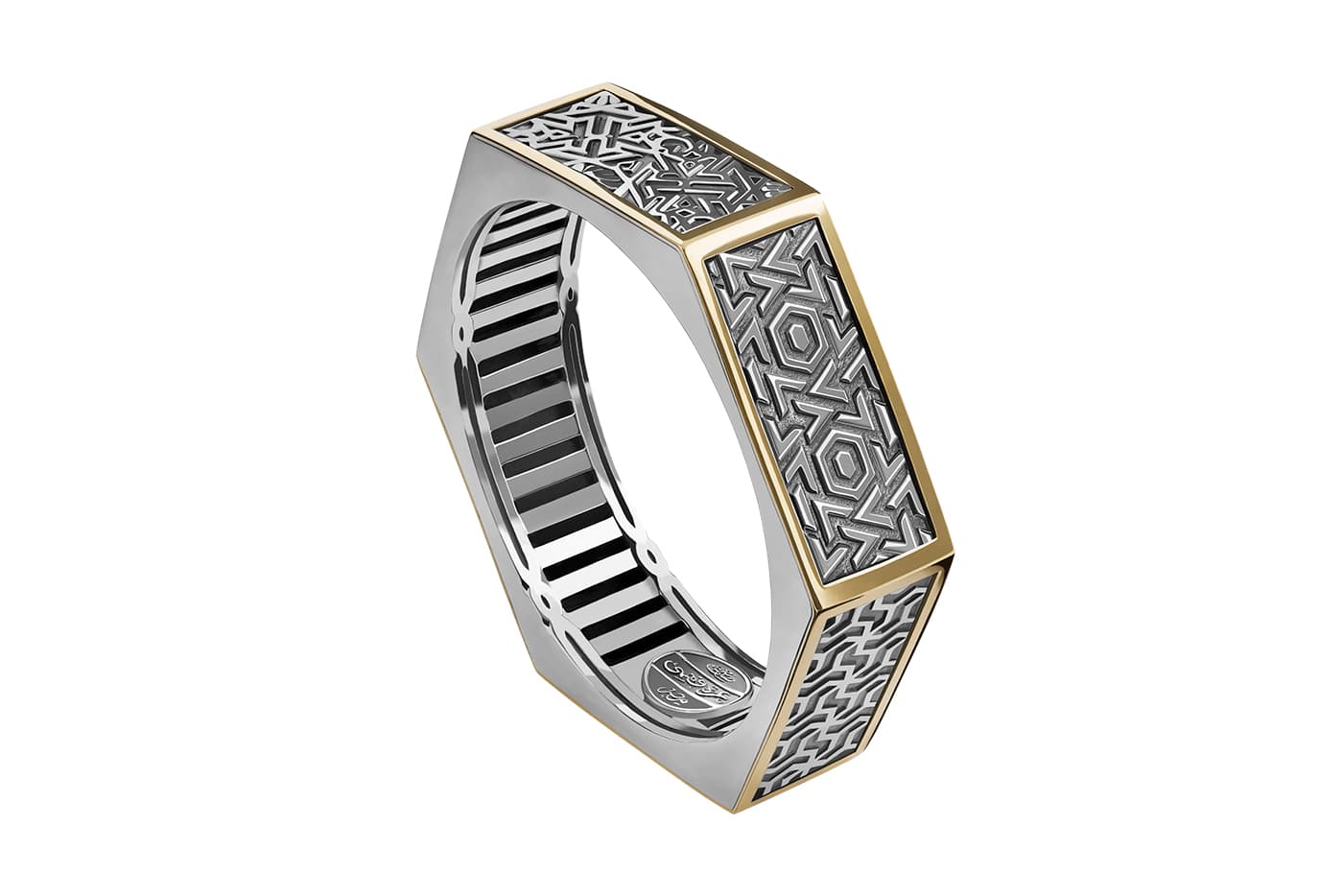 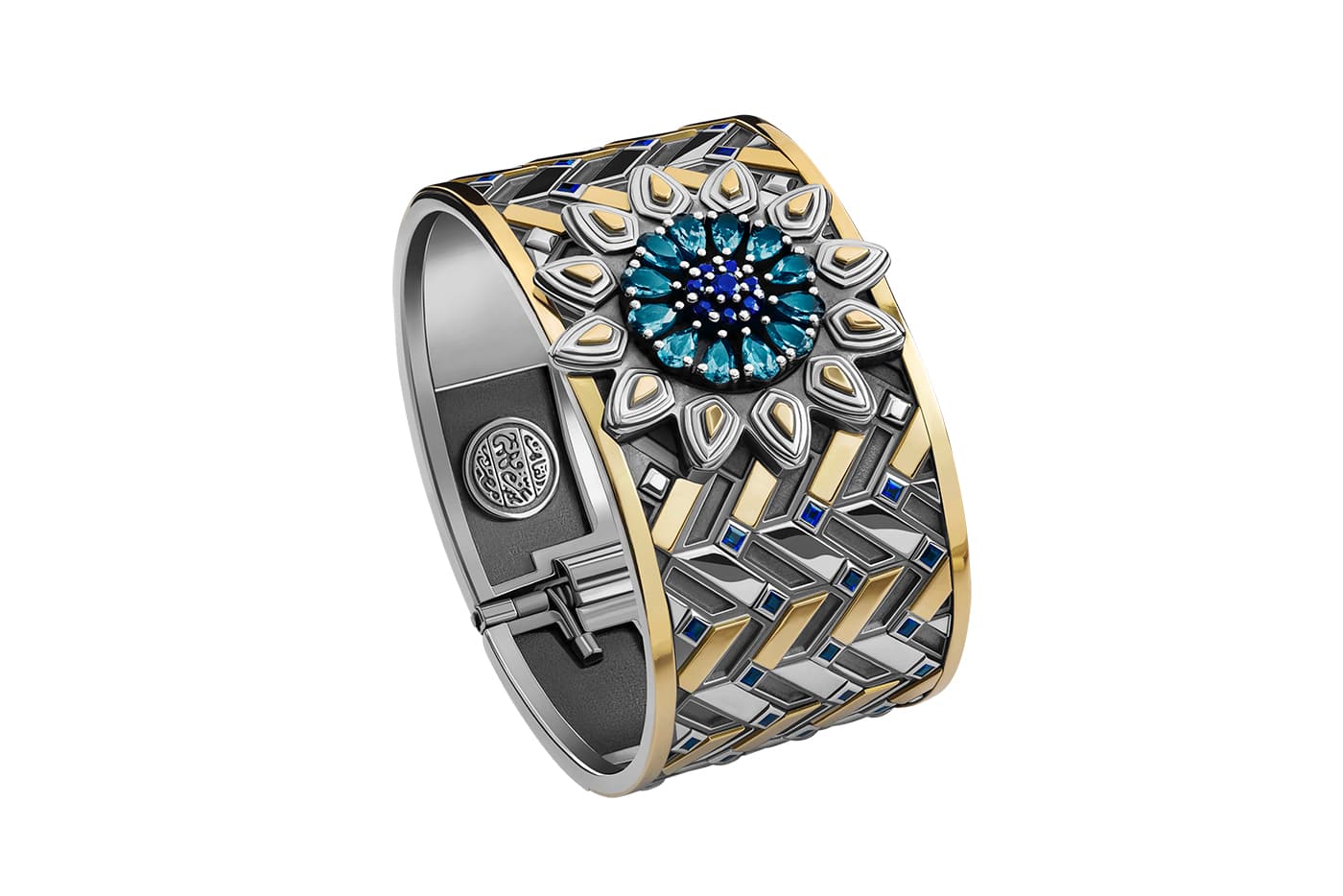 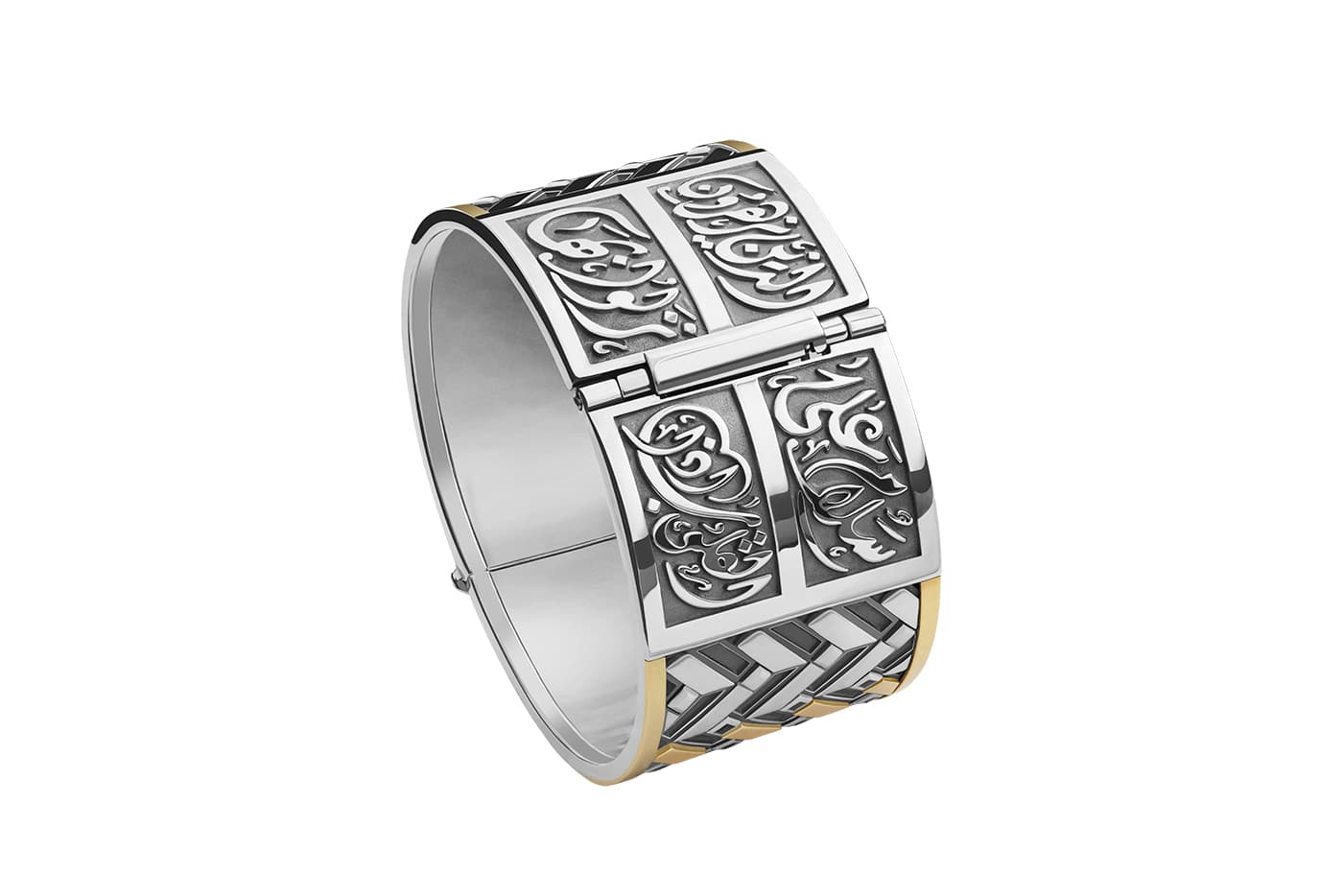 Long and short necklaces, cuffs, stud earrings, drop earrings and rings, in addition to cocktail rings, have become the jewelled interpretations of Cairo’s architectural history. You can see marble mosaics translated into jewellery, as well as Islamic stained-glass windows, and arches typical of the region’s architecture in the form of stalactites or honeycombs, known as mukarnases. They adorn the elegant, majestic Qawsun necklace, together with Arabesque motifs and eight-point stars. 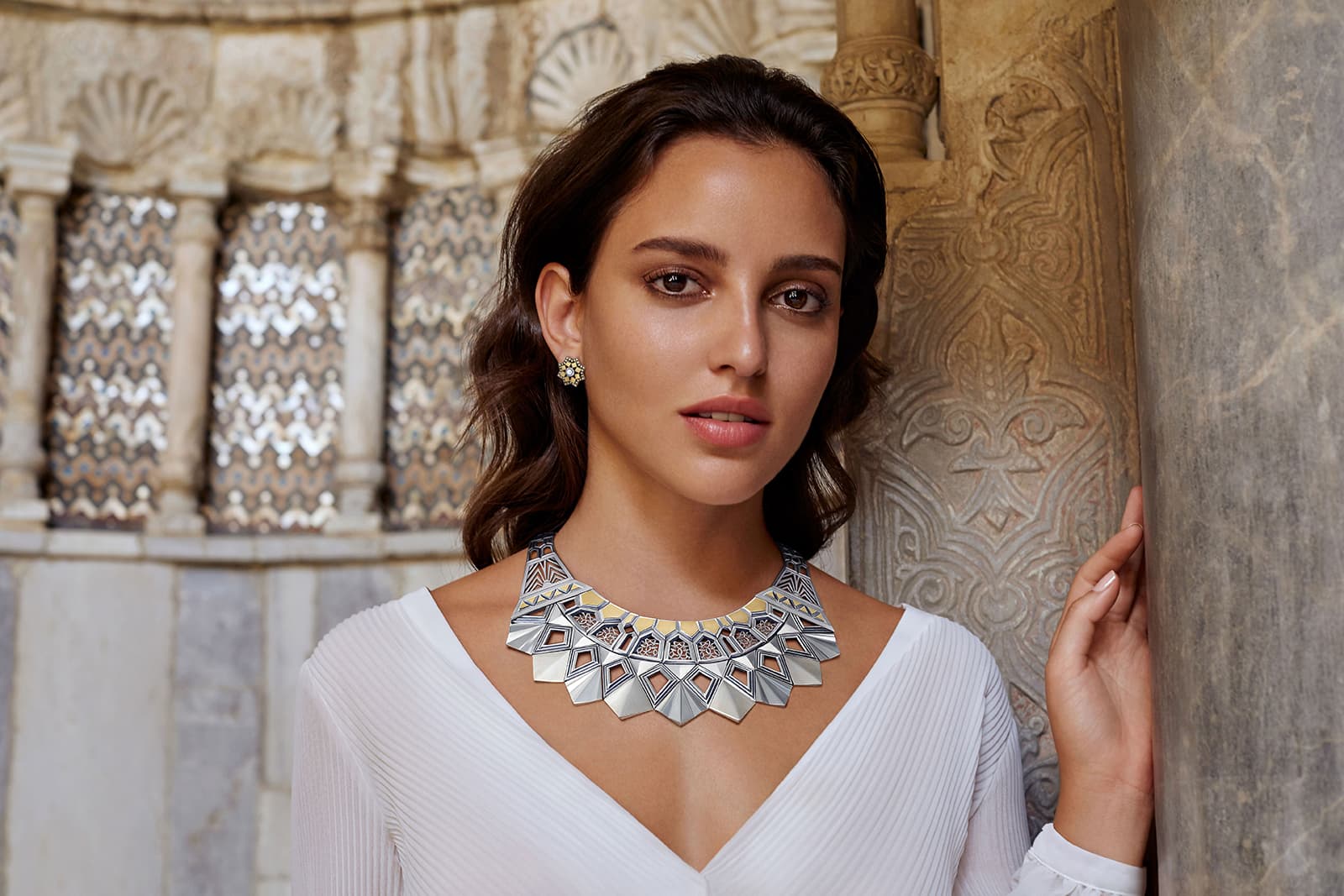 The Sultan Hassan necklace is a combination of 2 precious metals and is strongly influenced by the polychrome details of the pavement in the marble courtyard of the Madras. The Qalawun cuffs are decorated with semi-precious gemstones and calligraphy, in imitation of the intricate patterns on the marble panels used by Sultan Kalaun Al-Mansur when he erected his first magnificent building in Cairo. And the Baybars-Qaytbay hexagonal bracelet has three separate designs to reflect the powerful level of artistic mastery achieved during this particular Mamluk sultanate. 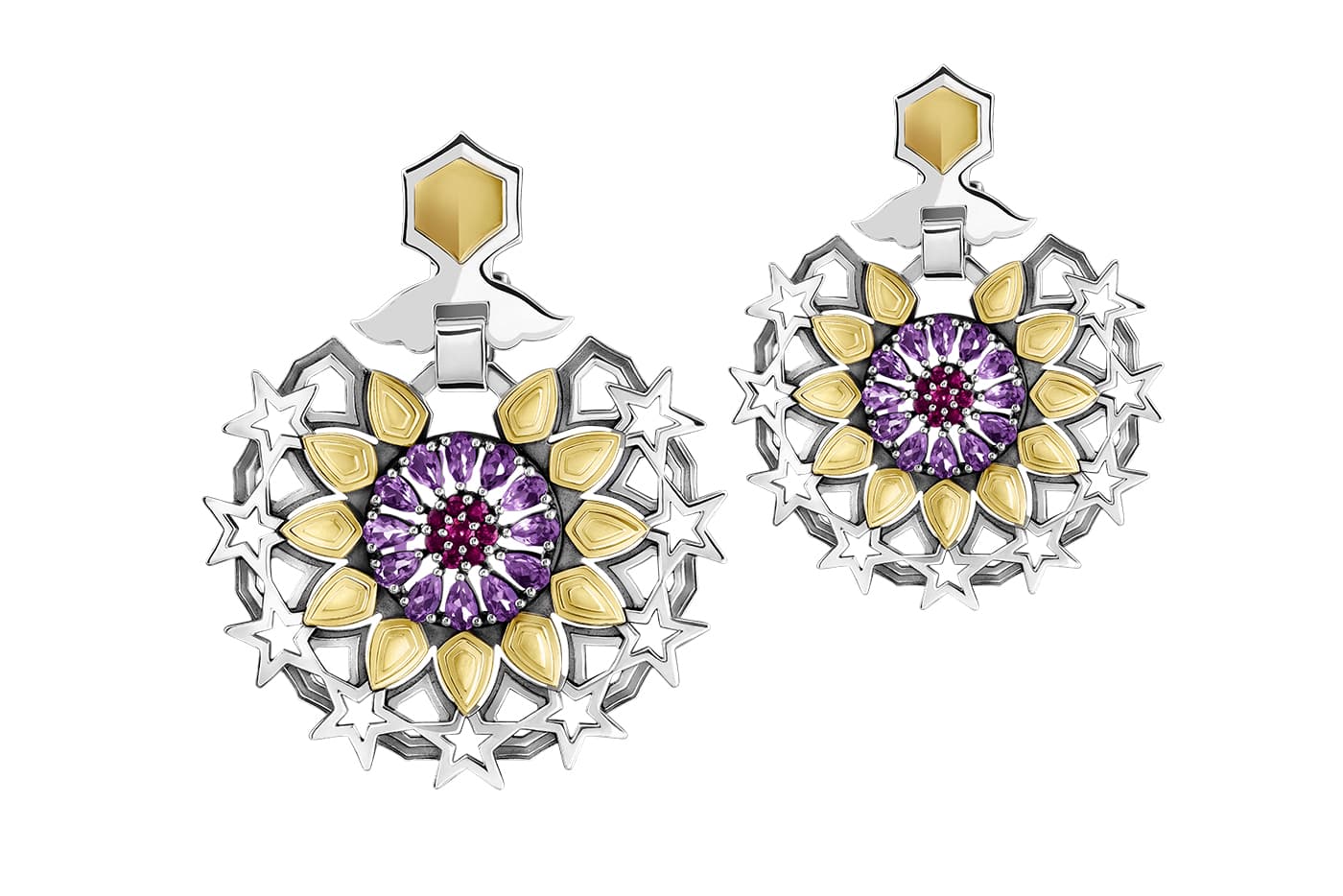 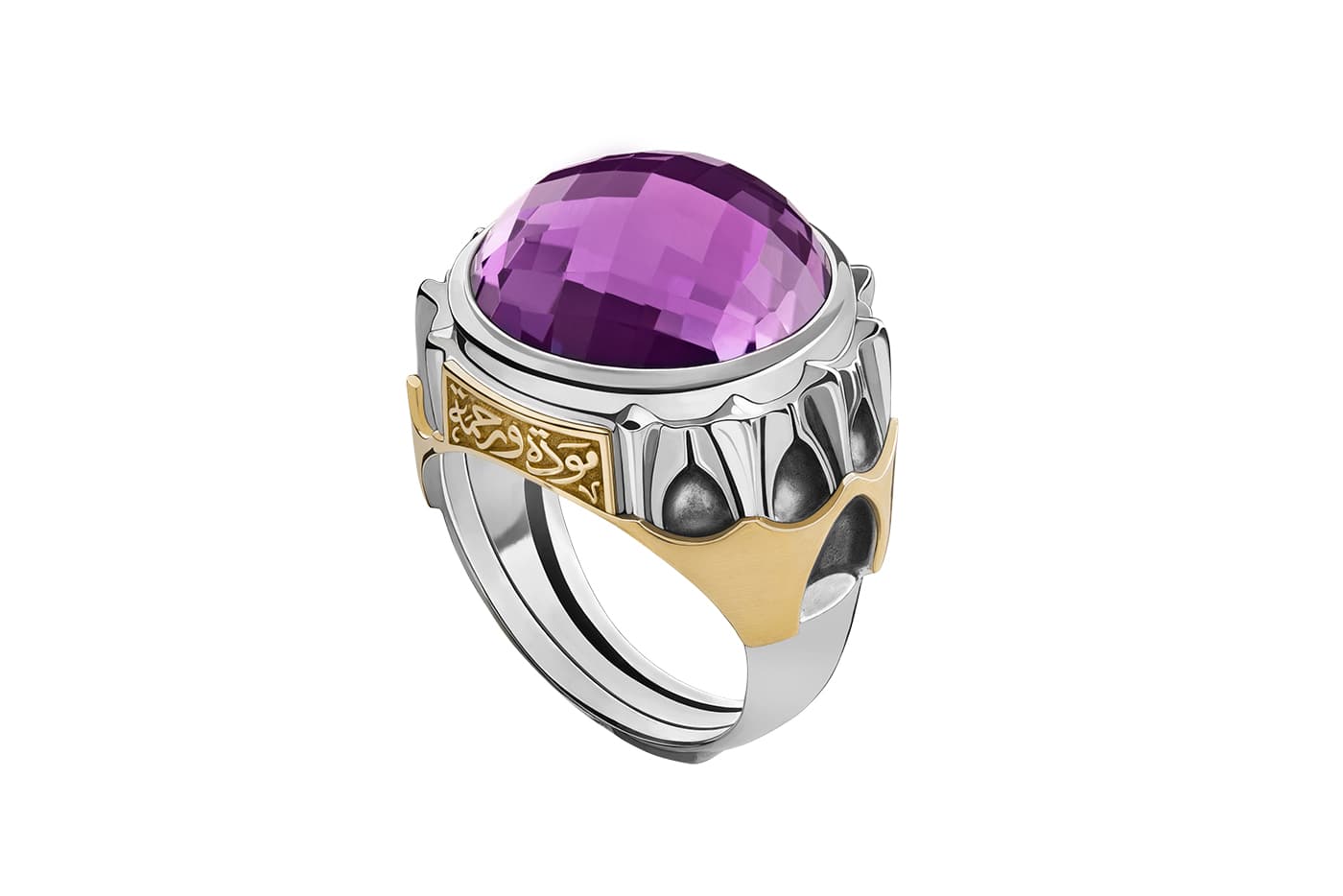 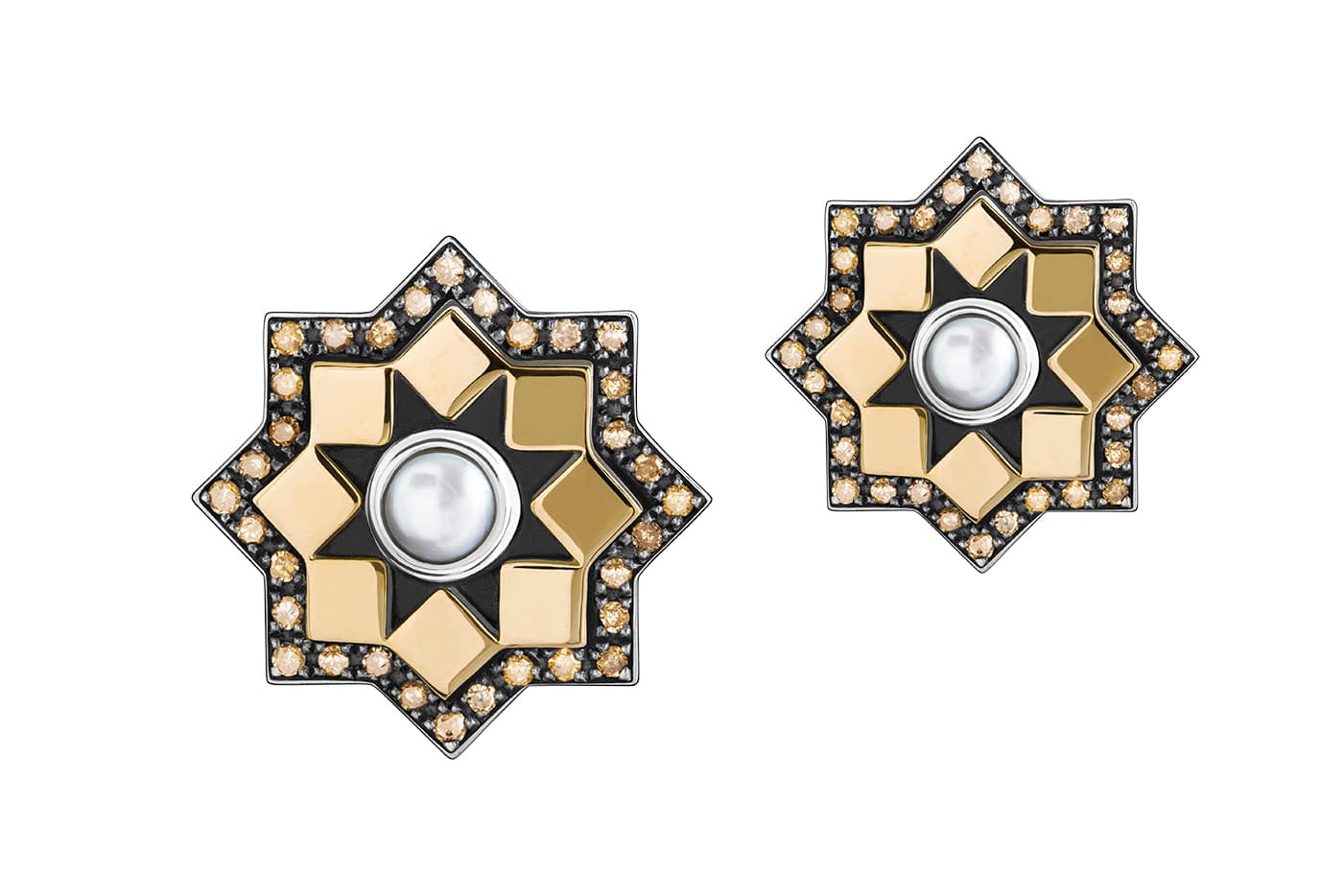 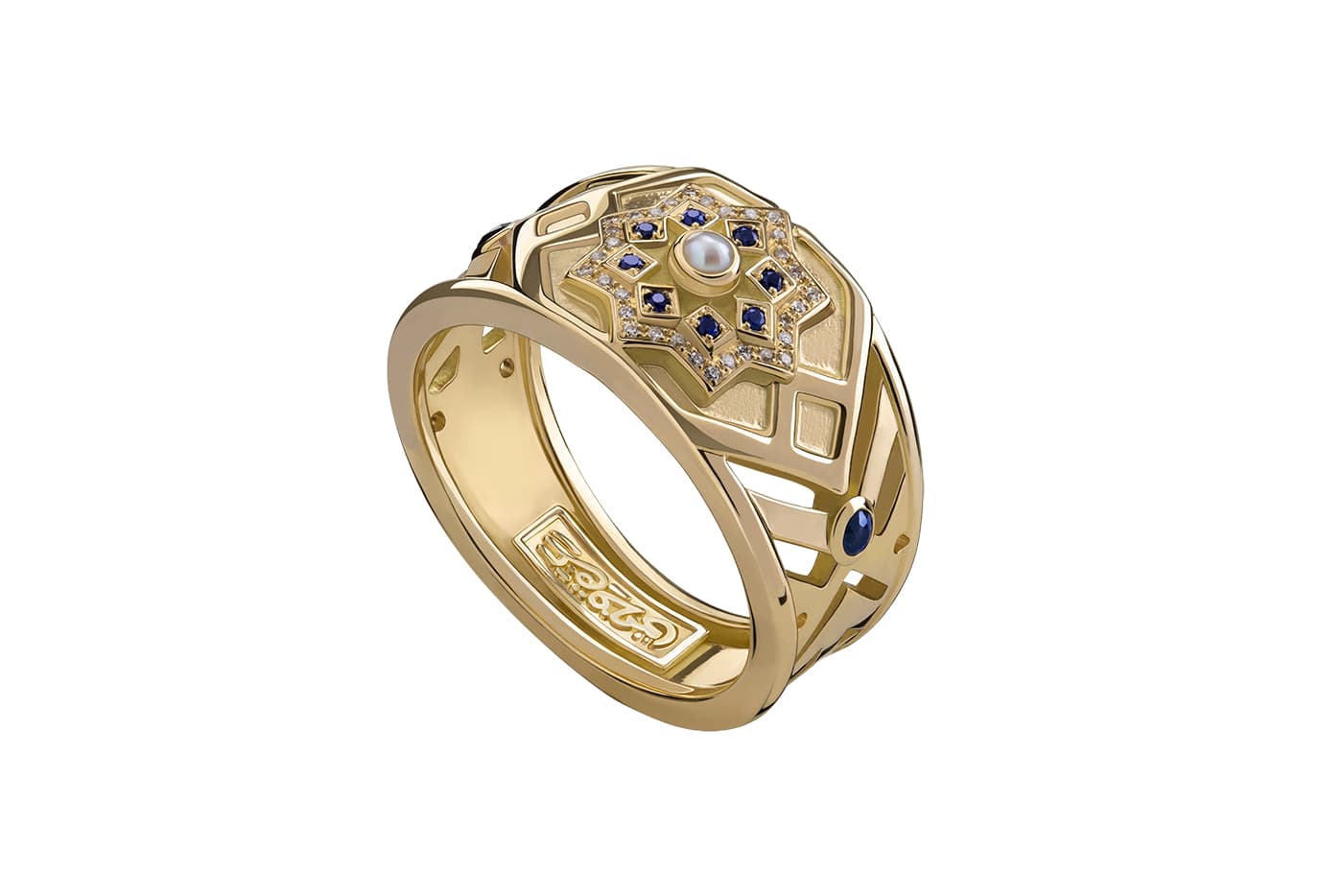 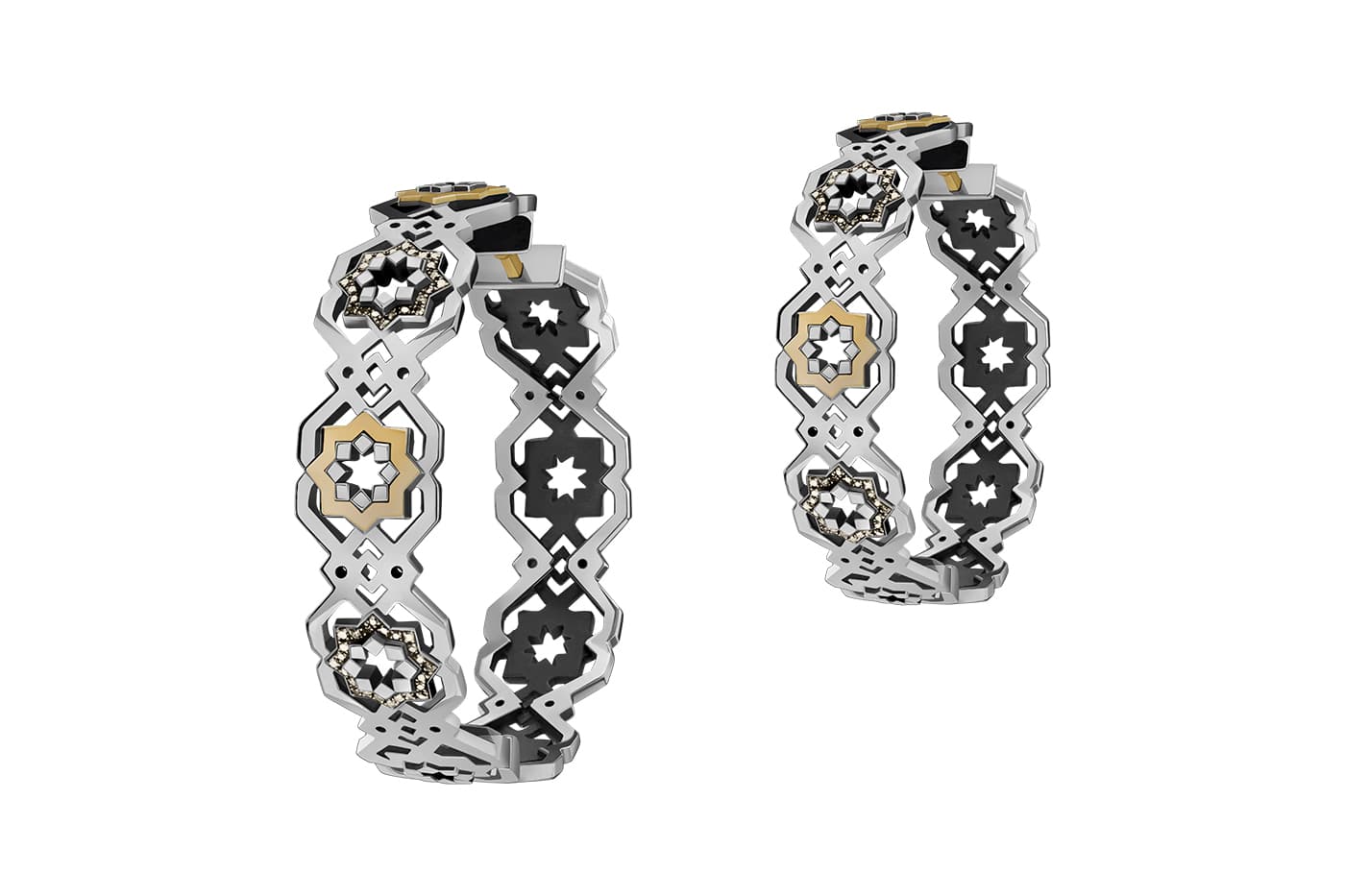 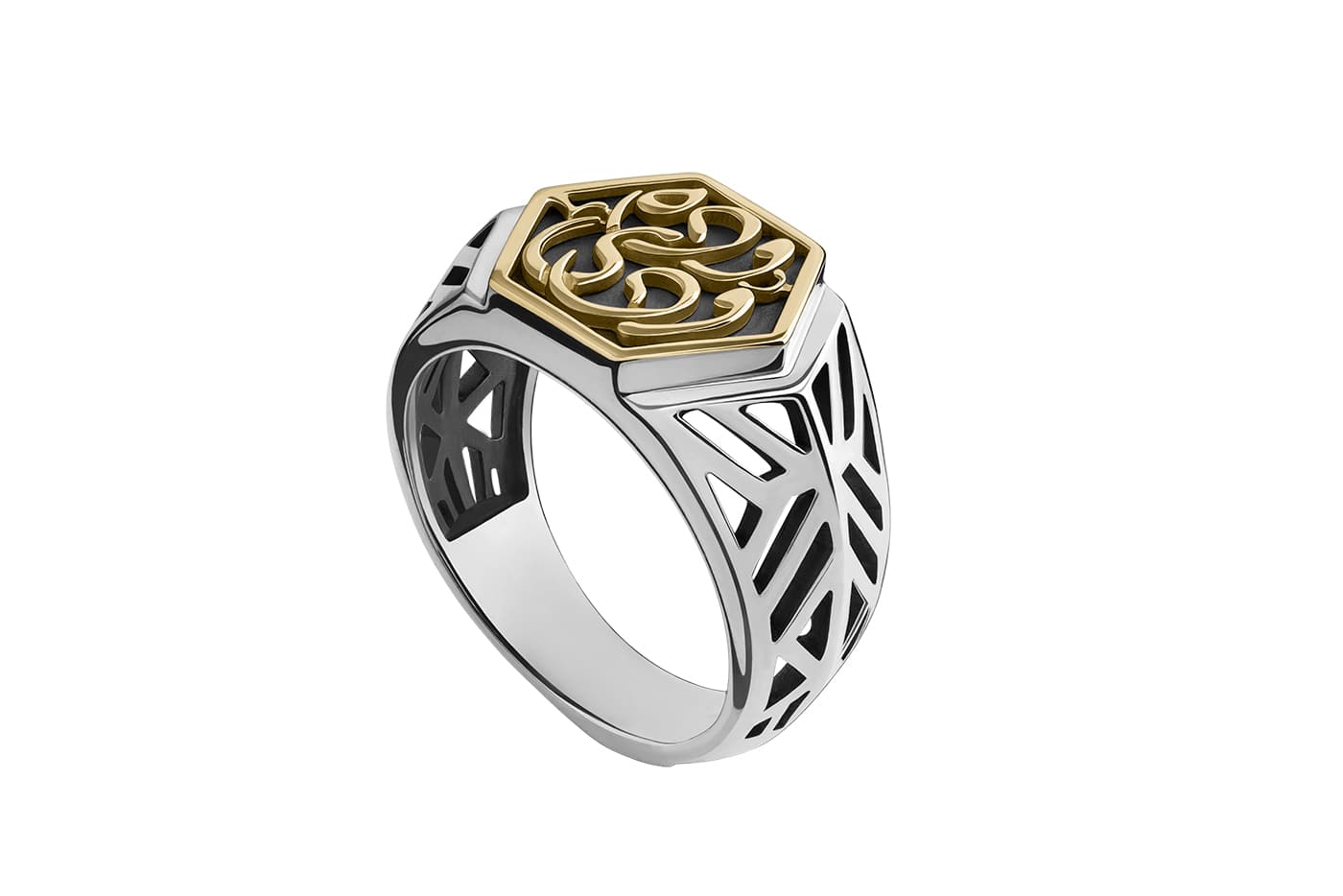 As you can see, the pieces are highly geometrical, with clearly calculated proportions and shapes – a feature this jewellery shares with architectural design customs more broadly. I have been familiar with the brand’s work for many years, so I immediately noticed Azza’s very dominant ideas, although you can also see some pieces created by her daughter, Amina Gali, who is the Head of Design in the company. 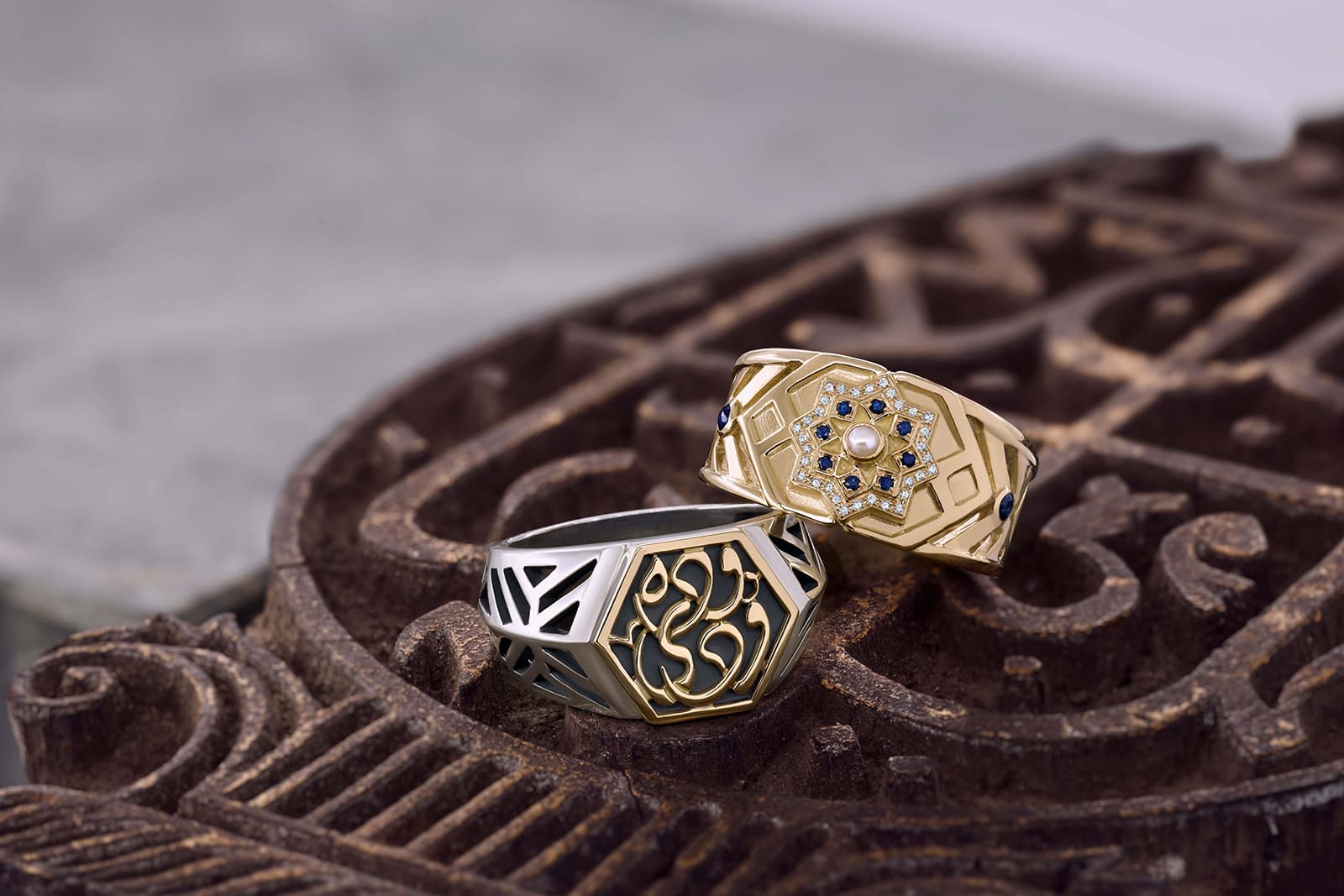 This collection is rich both in design, as well as in deeper meaning and emotions, embedded in the pieces through the collection’s core influence. If you want to investigate and understand the full significance of the unprecedented collection, you should immerse yourself in a discovery of Egypt’s history and architecture between 1258 and 1800, because each piece of jewellery in the Mamluk collection contains a reference to real-life buildings, rulers, techniques and achievements.