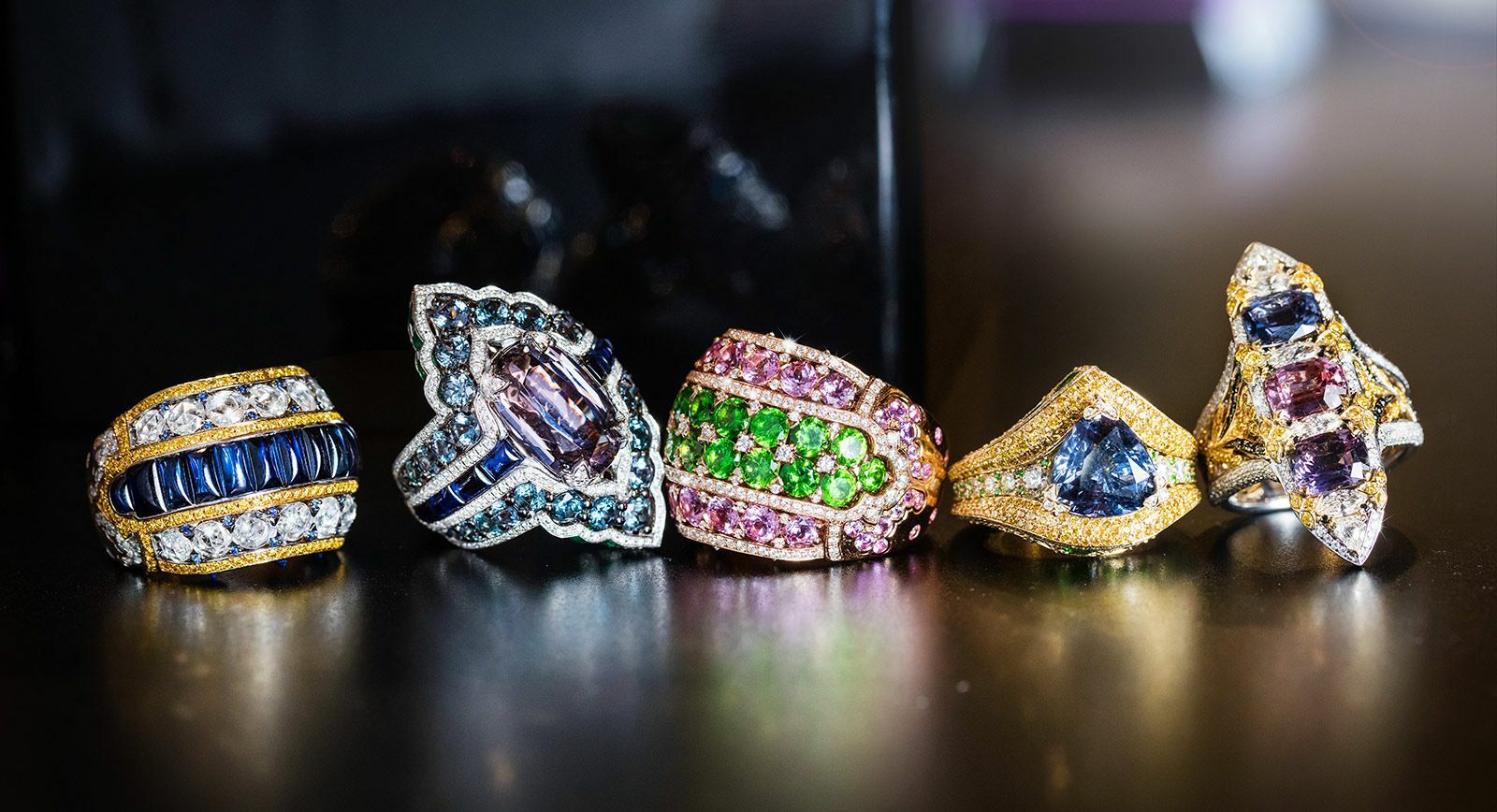 Alessio Boschi’s ‘Peacock Dance’ line is an extension of his ‘Breakfast In Jaipur’ collection, which was presented in Baselworld 2015. Alessio will be introducing his latest collection in the USA at the 2018 COUTURE Las Vegas exhibition; however, within his jewellery creations he isn’t looking to simply reproduce the bird’s feathers, or create a reinterpretation of the ‘eye-spot’ patterns of it's tail…

‘Peacock Dance’ studies the architectural, decorative and artistic elements of the area which is the natural habitat of the peacock: India. The ‘Peacock Dance’ creations also take their name from the traditional Asian dance that is performed from southern China to southern India, Bangladesh, Indonesia and Sri Lanka, which mimics the mating dance of this majestic bird. But what distinguishes the ‘Peacock Dance’ jewellery from the previous ‘Breakfast in Jaipur’ collection? 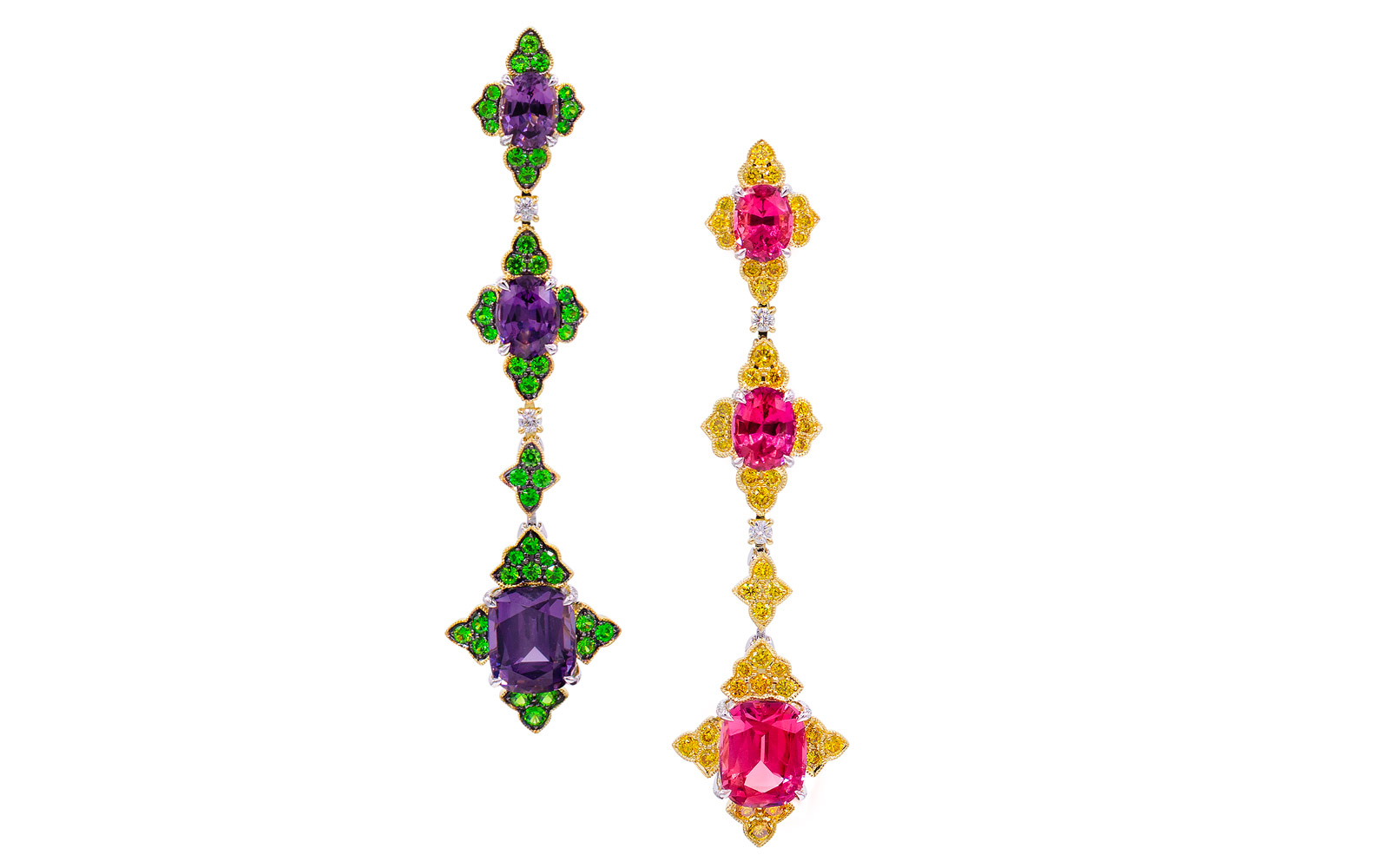 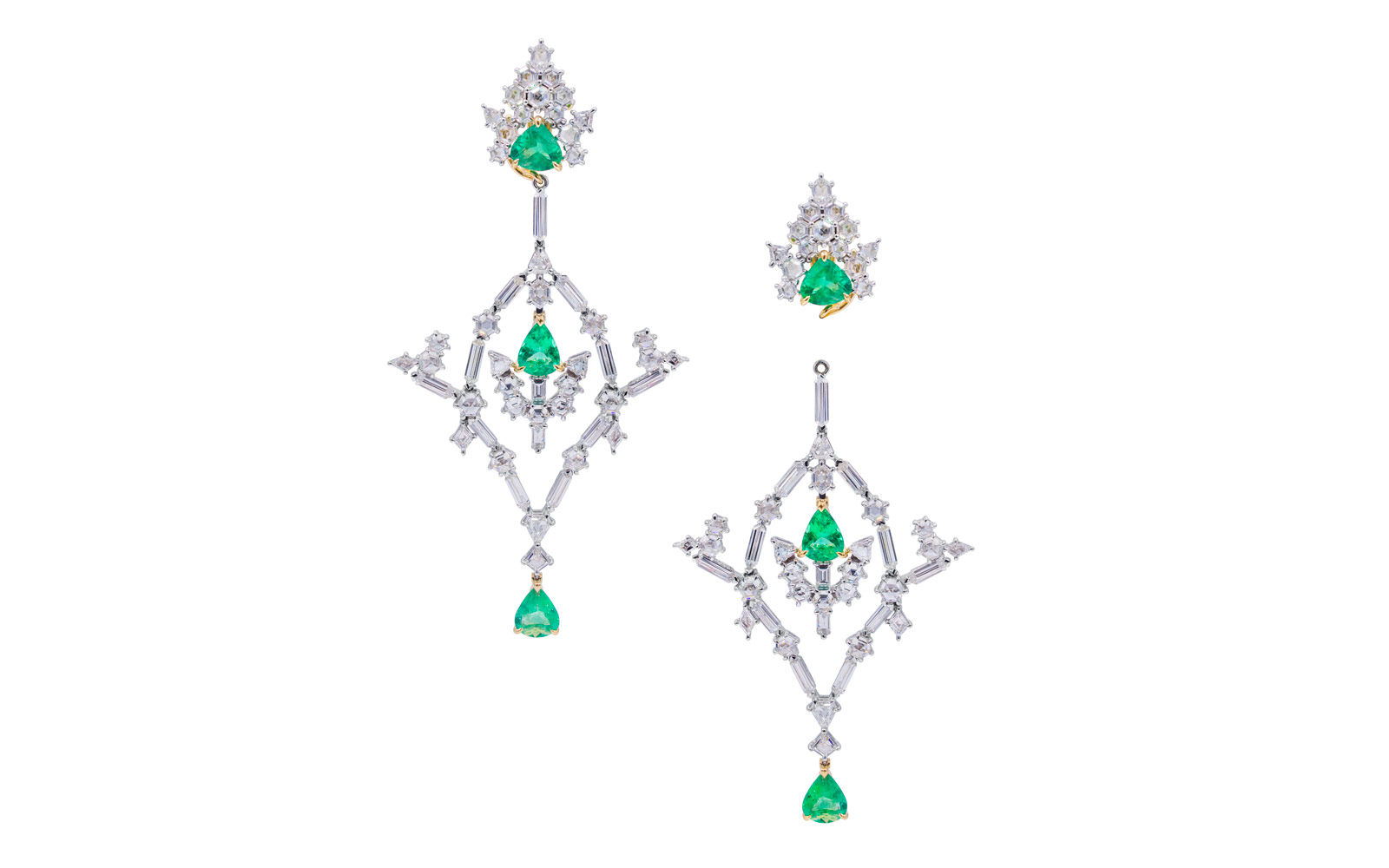 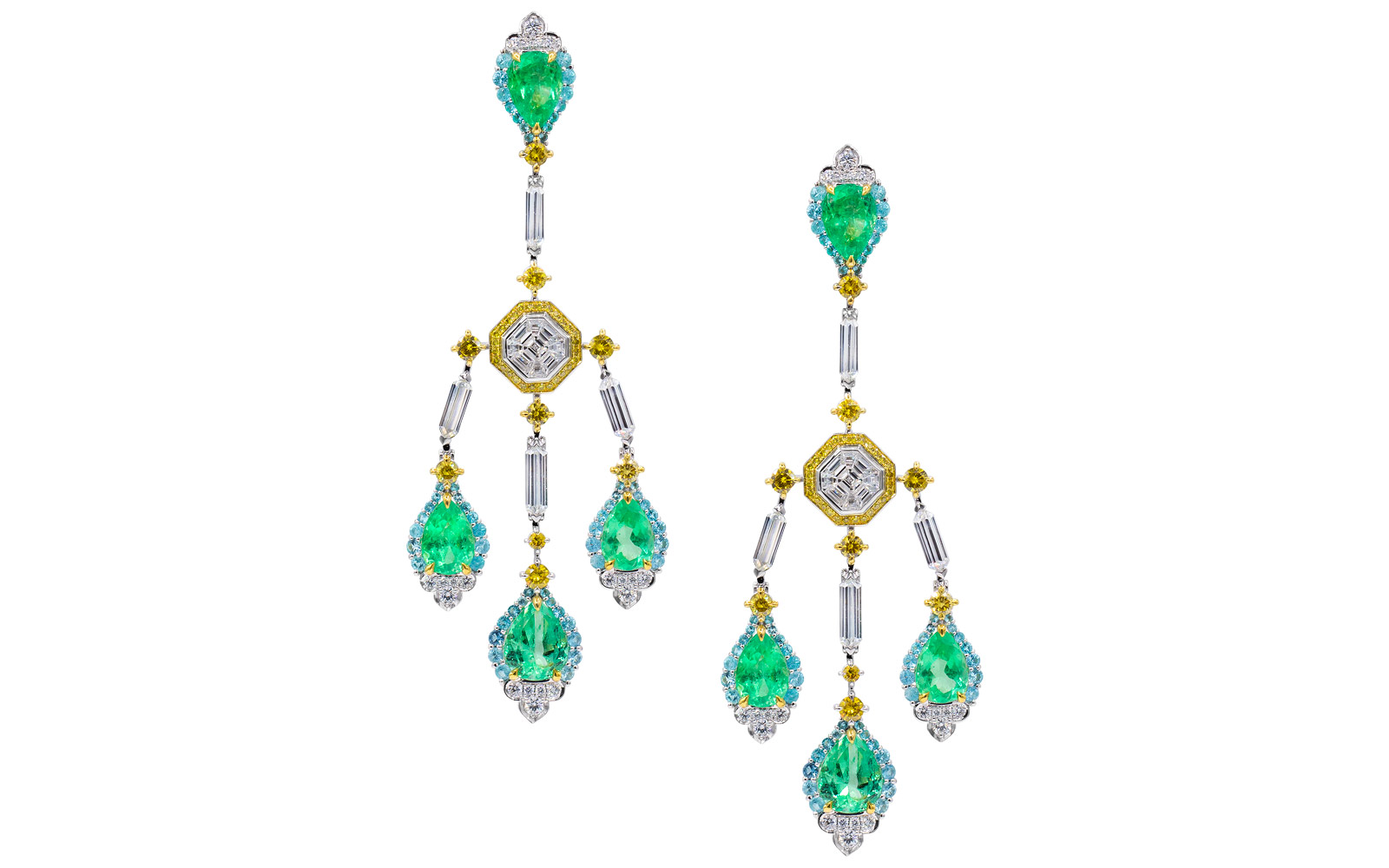 The inspiration comes from not one, or even two, but three sources: all centered around the beauty of the peacock. The first is the natural plumage of the bird, with its inherent iridescence and vivid tones. The second is the Mughal palaces, forts and mausoleums of Rajasthan, which are one of the places where peacocks roamed freely as live decorative ornaments. The architecture and extensive detailing of these residences featured motifs which were largely influenced by Persian patterns and shapes - as well as the paintings, tapestry, sculpture and engravings created in this area. These caught Alessio’s creative eye and planted the seed of the idea to create a “micro bejewelled Mughal empire” - according to the designer himself. 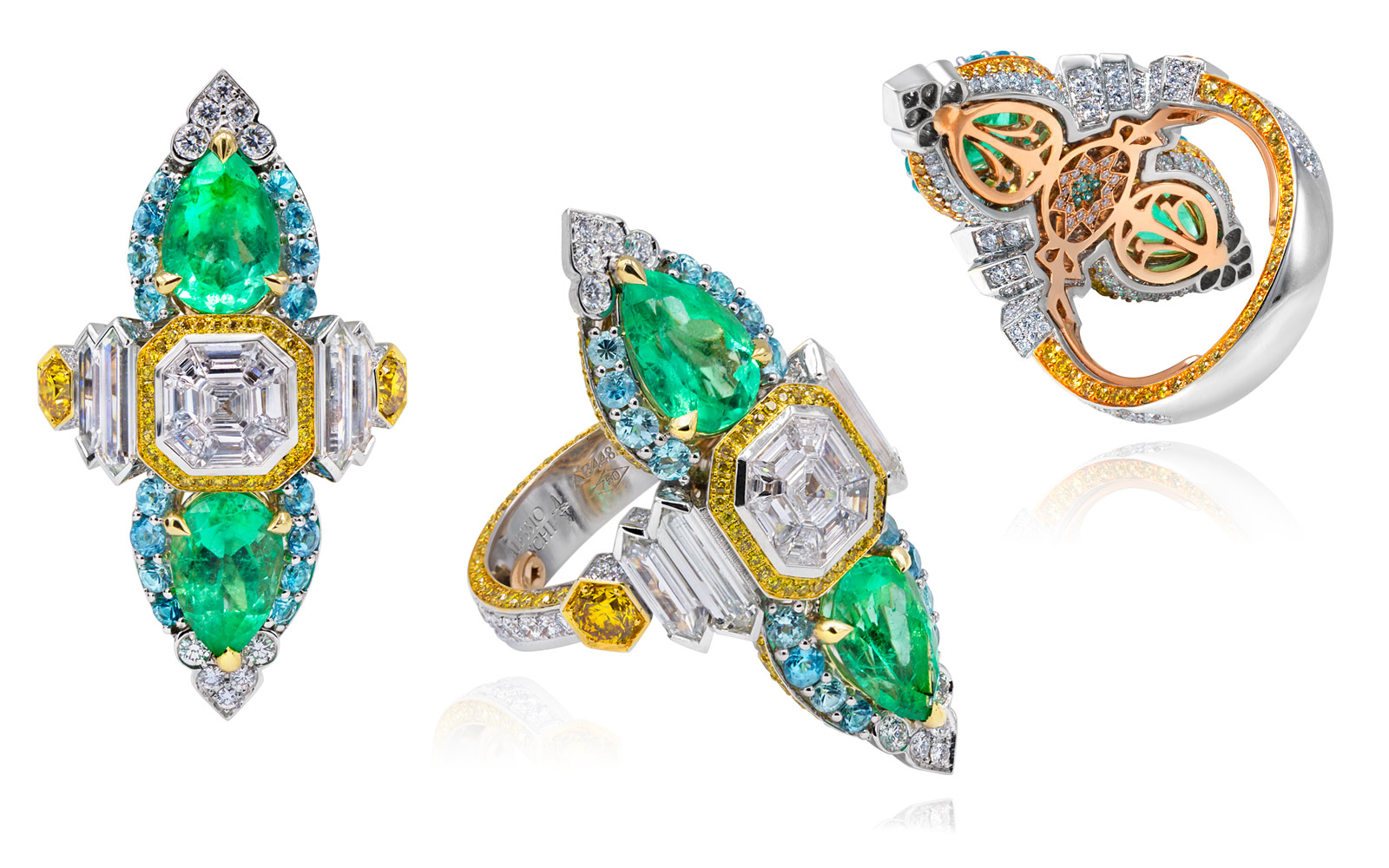 This area of Rajasthan also heavily influenced Alessio’s third source of inspiration: Mughal jewellery, which was designed in a detailed and lavishly embellished style, with decoration on all elements of the creations, even those which were concealed. This is one of the techniques which was employed to make the ‘Peacock Dance’ jewels so spectacular: the designer decided to decorate every facet and angle of the jewellery – working on all surfaces such as the shank, ear clip, and even the gallery with engravings or gemstone settings - that wouldn’t even necessarily be seen by anyone other than the wearer. 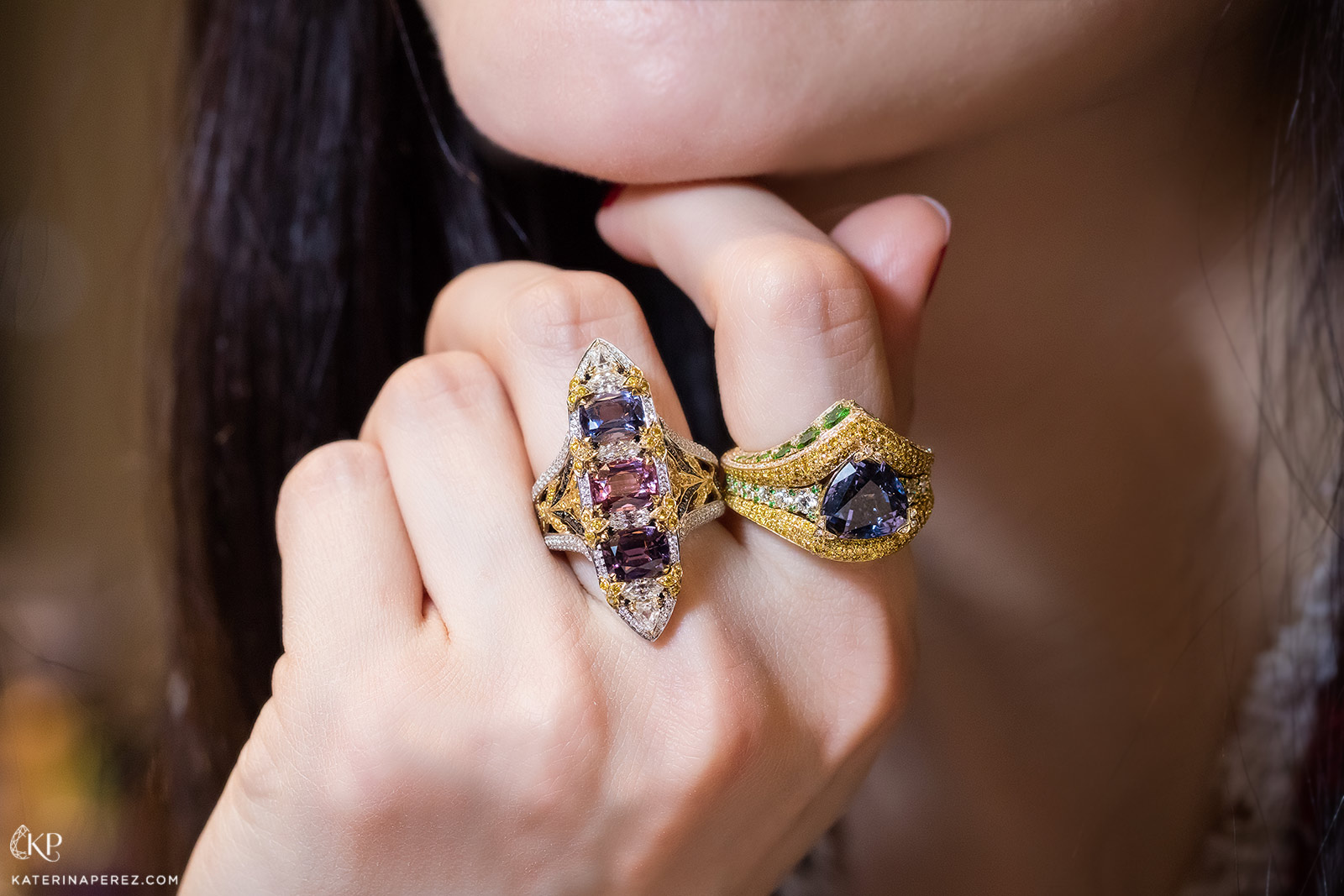 In each of these one-of-a-kind jewels from such a limited collection, a combination of at least three different gemstones has been used. Emeralds, sapphires, blue and purple spinels, demantoid or colour-changing garnets, yellow, black and colourless diamonds are married together in harmony and in an exciting burst of bold hues. The bright gems are complemented by a variation of white, yellow or rose gold, alongside textured black or grey rhodium. Alessio has even employed engraved details in different tones of colourful enamels to make the jewels even more striking. 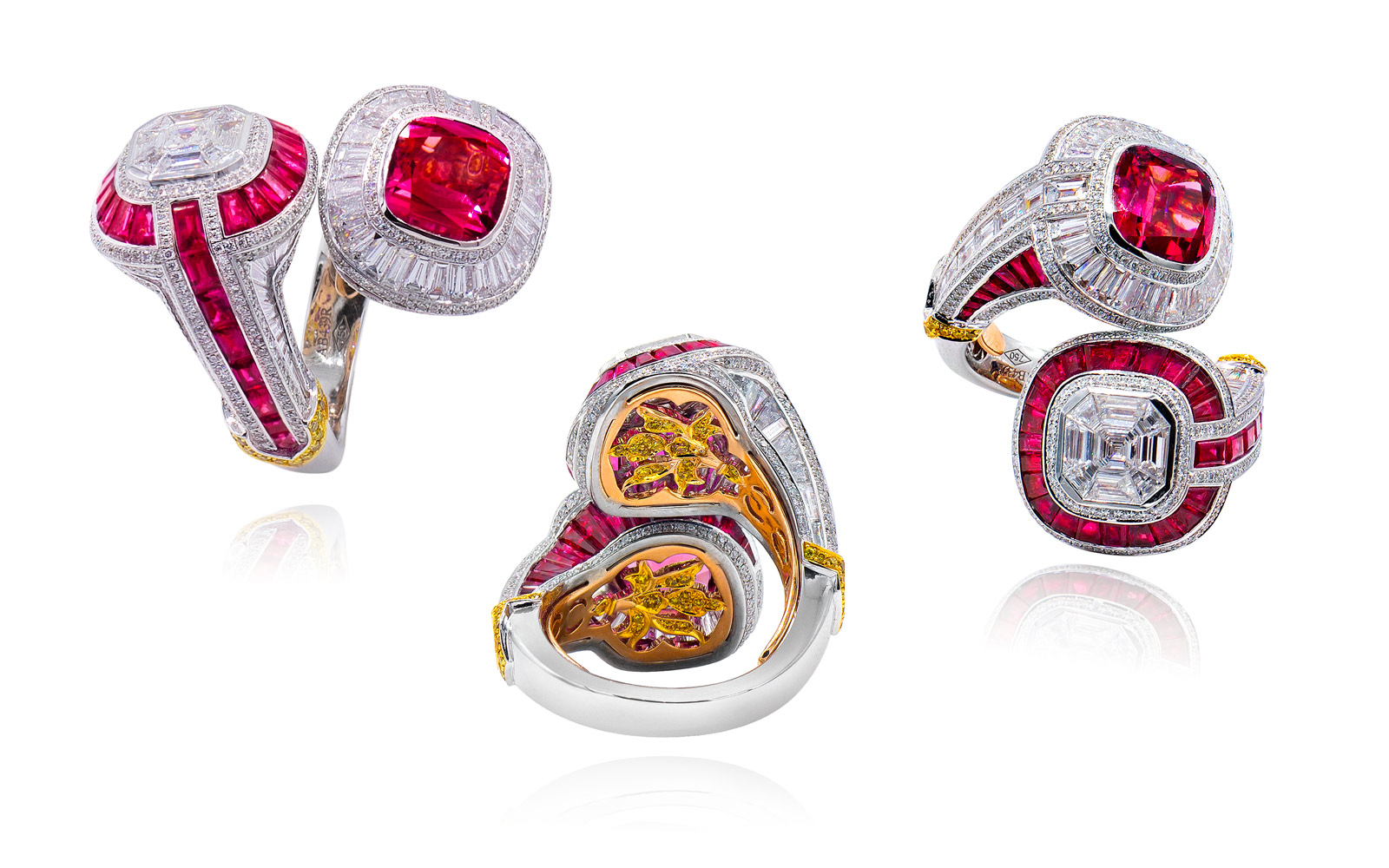 The Italian designer wanted to merge colours and gemstones delicately, in what Alessio refers to as a “dialogue.” This idea is based on the concept that some element of the design should be visible throughout the entire form of the jewellery, to create a symbiotic and proportionate ‘conversation’ between all the parts of the same jewel. For example: “if we use yellow diamonds framing the centre stone - of say, an un-heated blue spinel - then we should put yellow diamonds on the shanks between the blue sapphires set there,” affirms Alessio. 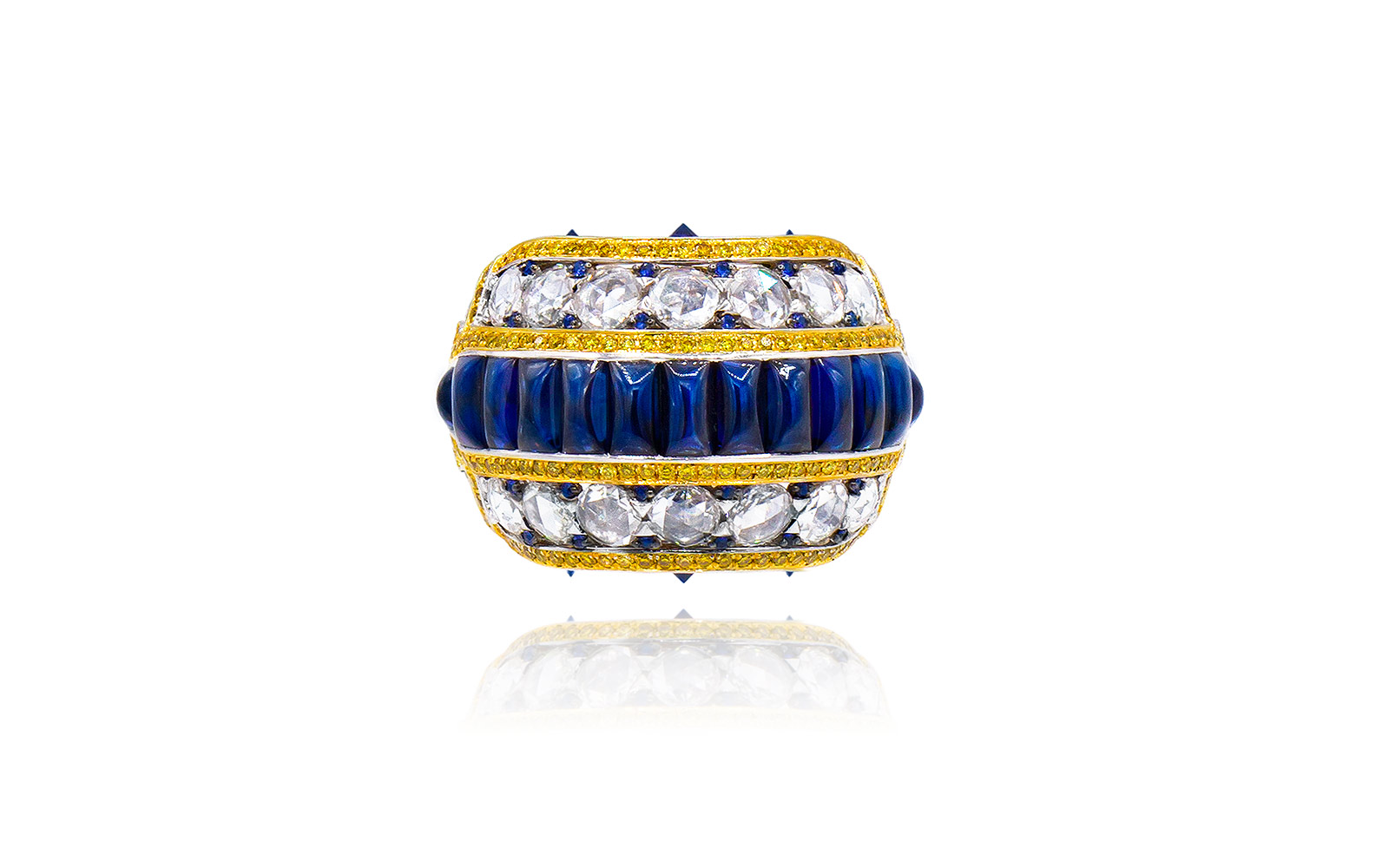 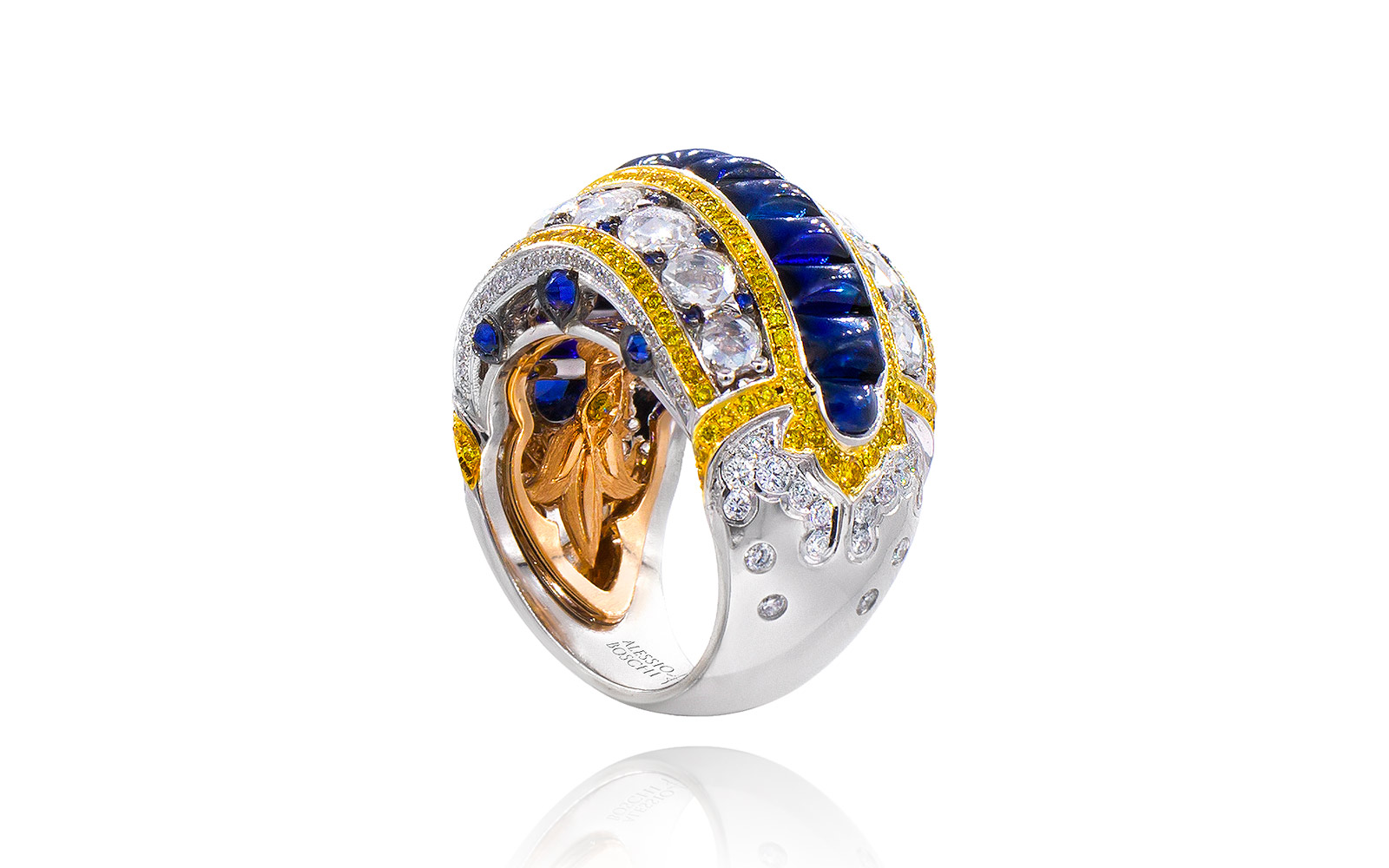 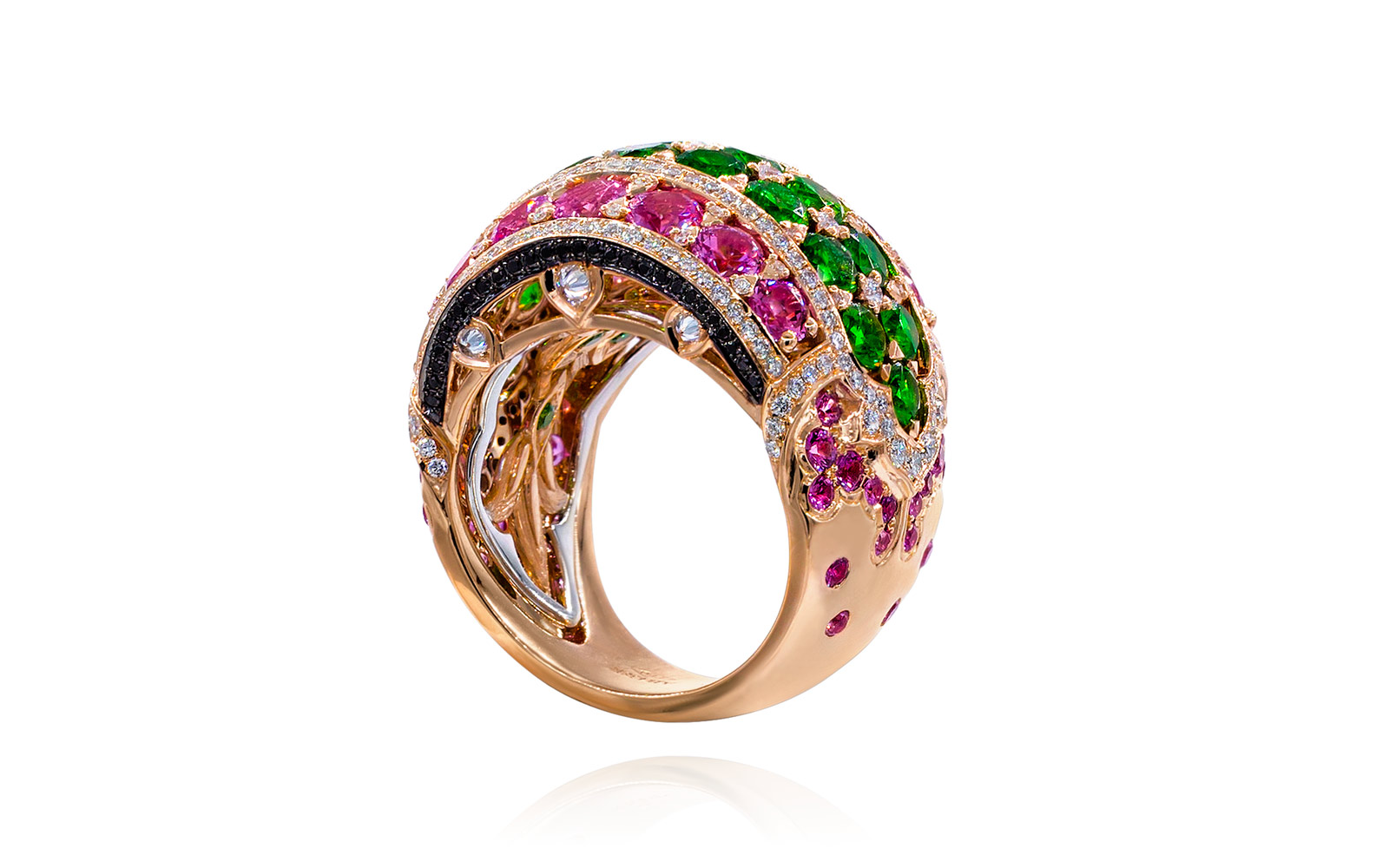 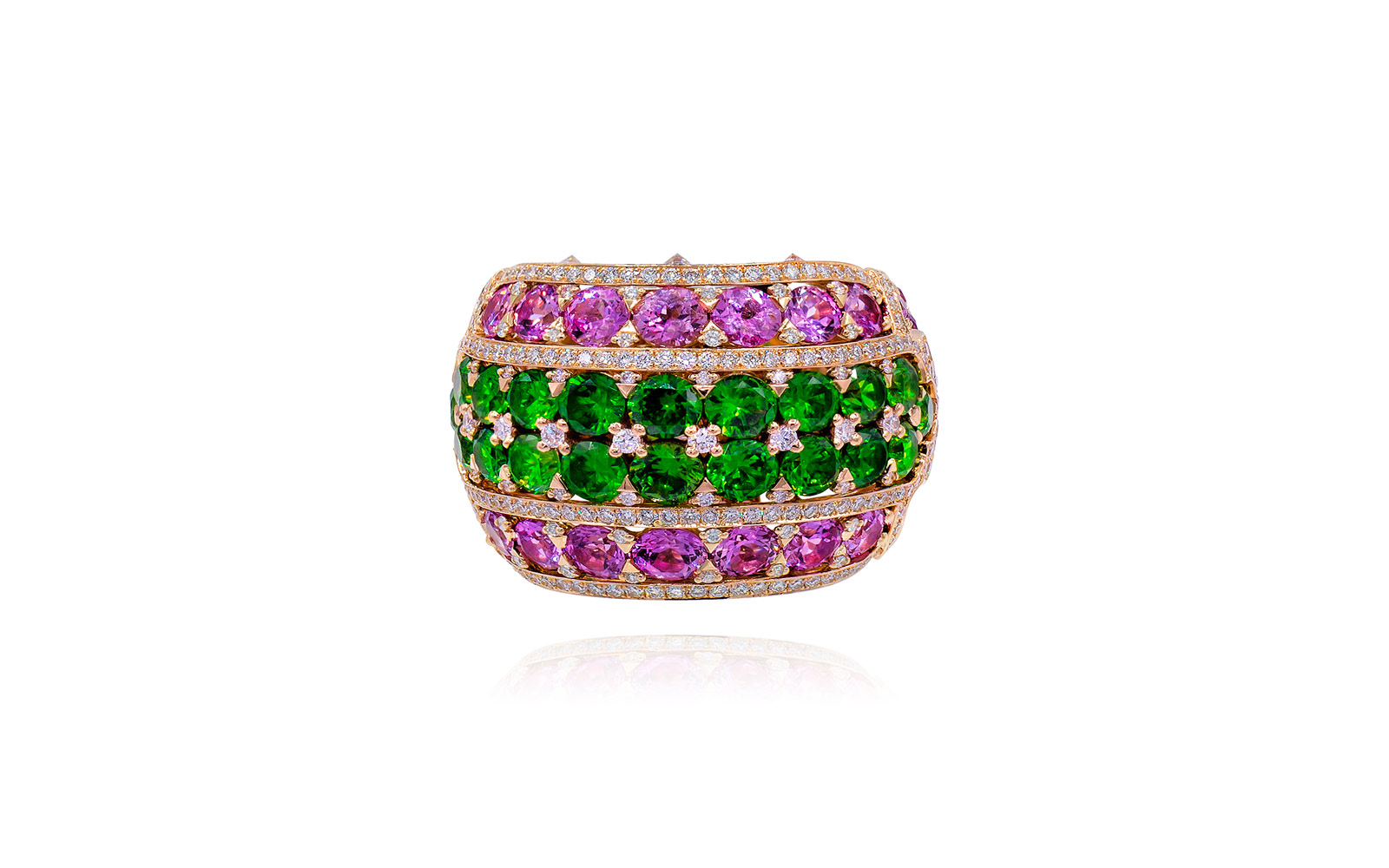 Another sophisticated technique which the Italian designer has chosen to incorporate into some of his pieces is the ‘mosaic’ of diamonds, where several gems are set in forms which mimic the natural facets of a larger emerald or Asscher cut stone. This has 2 effects; creating the appearance of a larger and much heavier gem, and also marrying the shape of this stone with the elongated hexagonal baguettes set on the ring’s shanks or set on the earrings. 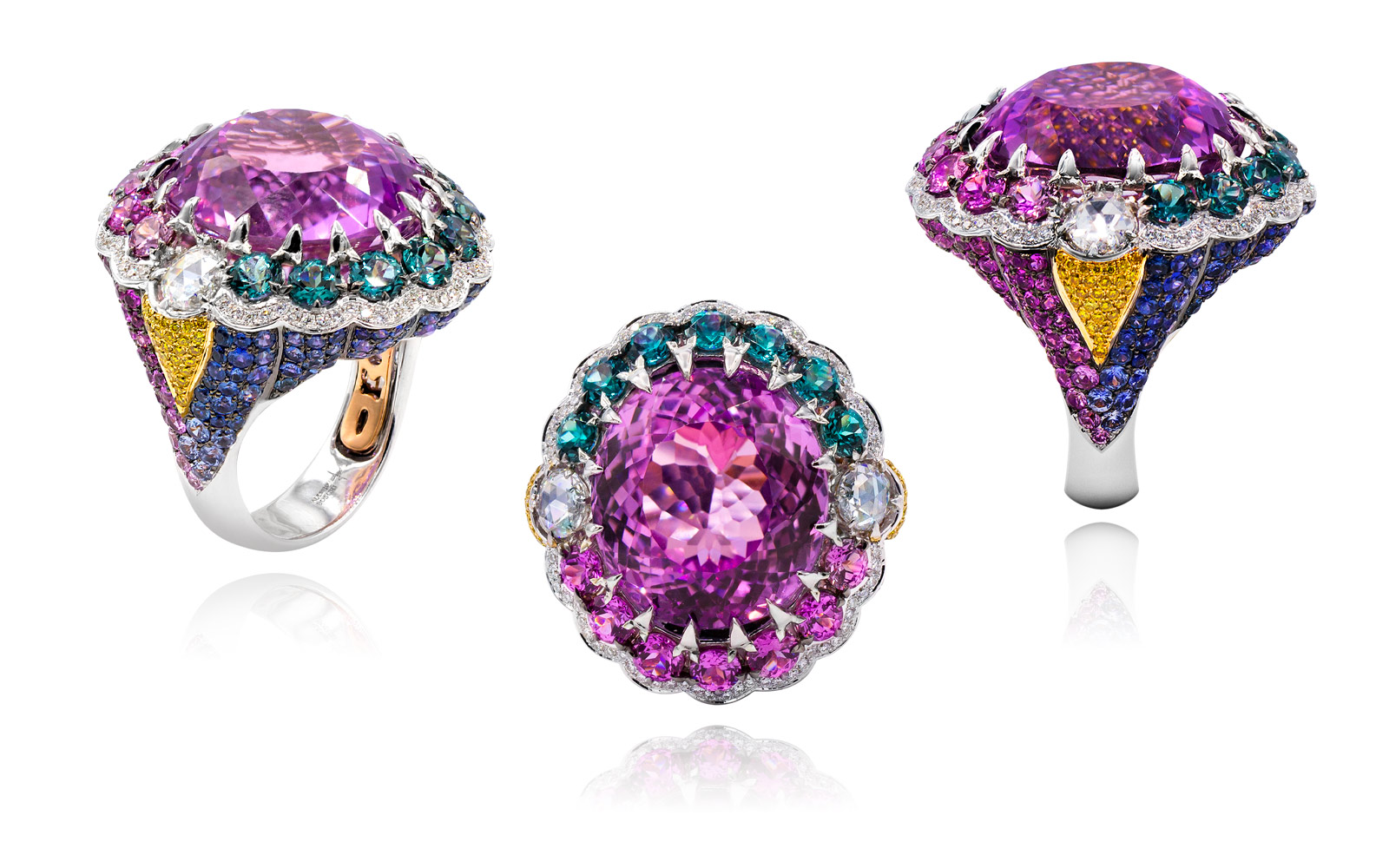 Again, the ‘dialogue’ between all components and elements of this fine jewellery is what creates sophistication, even with so many gemstones, colours and design concepts in one piece: “On a few occasions during the process of manufacturing, we re-modelled and adapted different pieces as well as the gemstones, because it was so crucial to us that everything would be proportionate and feminine, even with such an explosion of colours!” 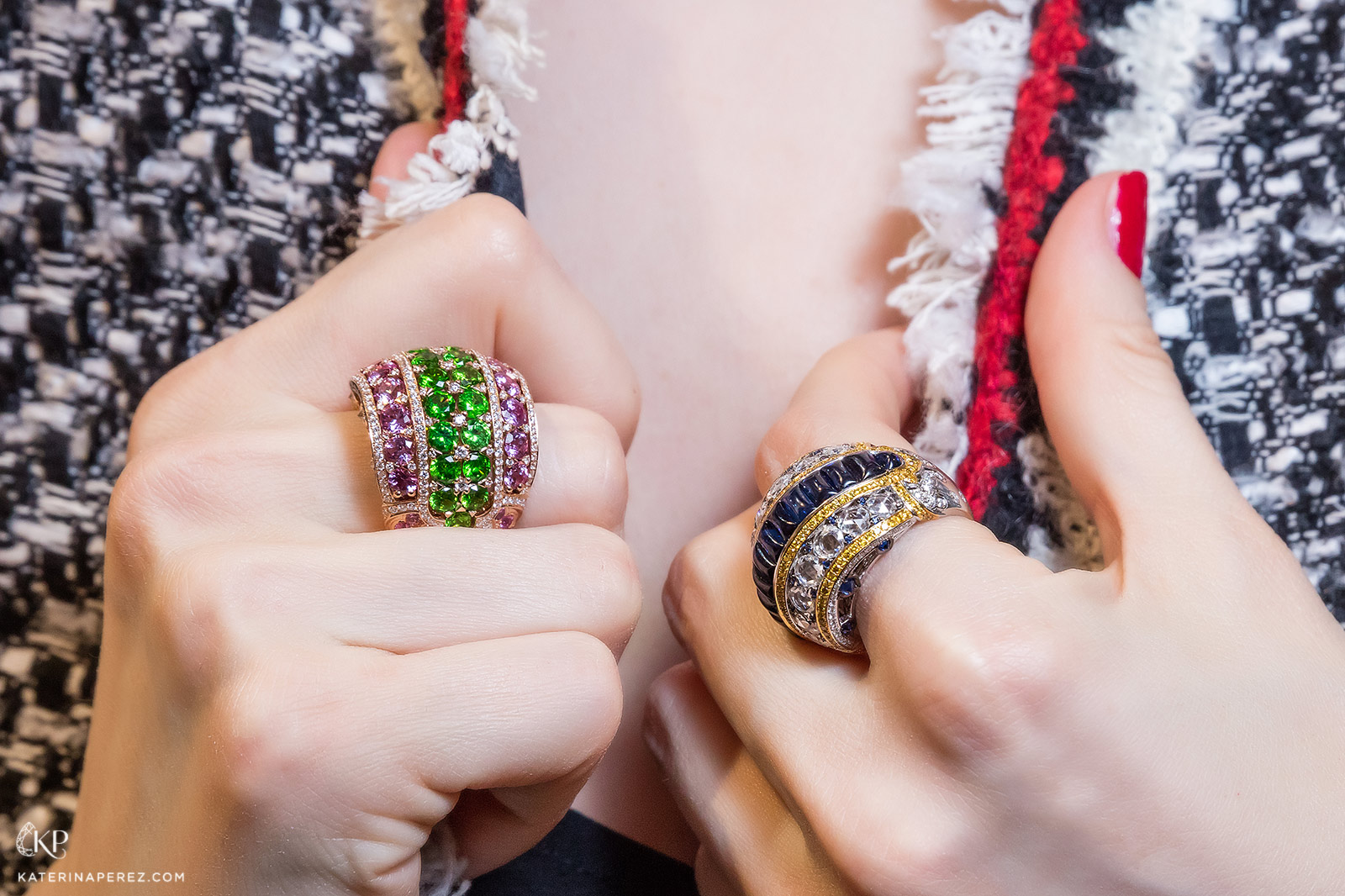 The ‘Peacock Dance’ collection is one of the finest jewellery lines which Alessio has ever created in terms of materials, intricacy and craftsmanship. This symphony of colours and complex design is truly representative of the brand’s style and philosophy, both in the beauty of the collection and the deep, meaningful thought behind the jewellery art which has been created. 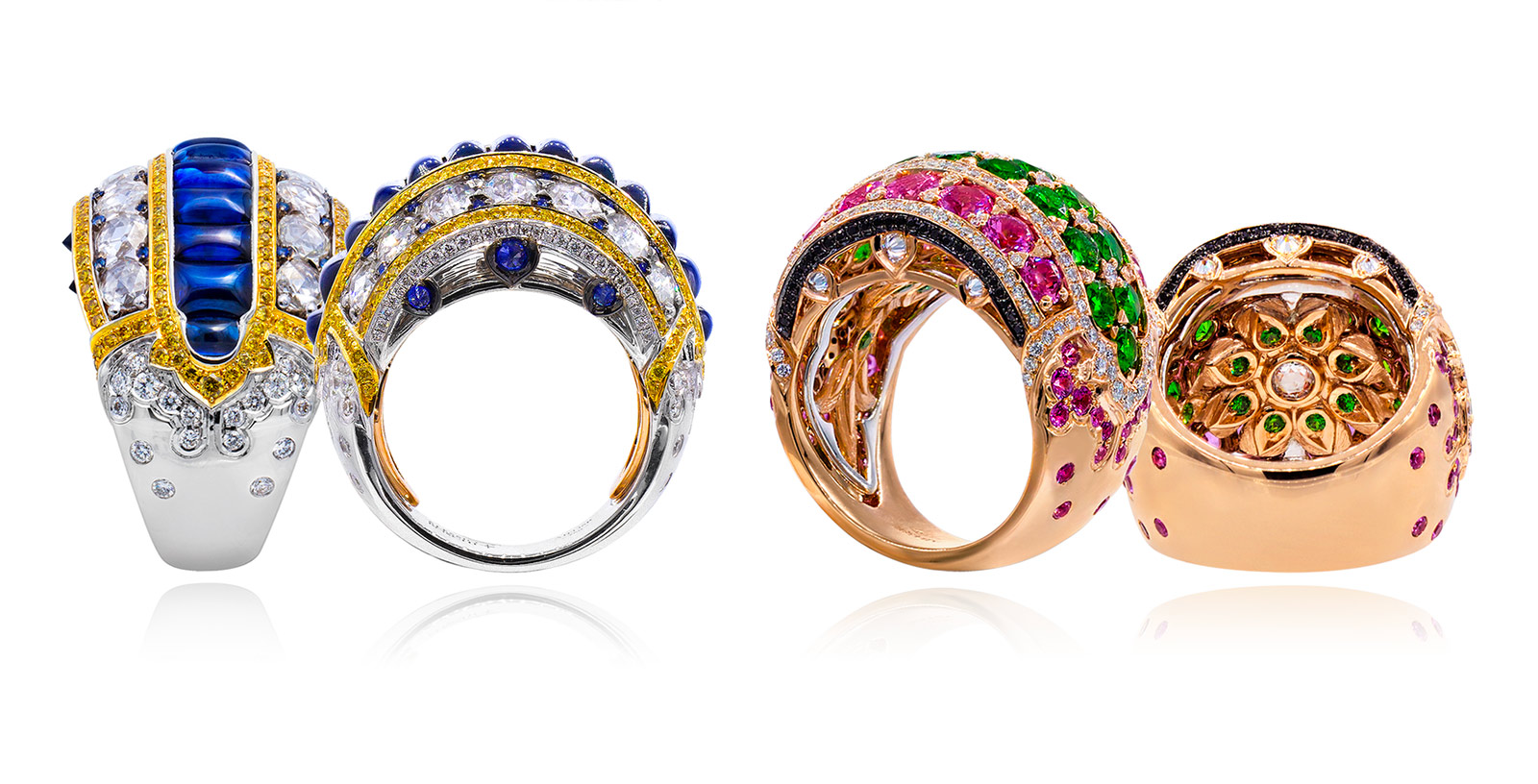 Alessio Boschi’s ‘Peacock Dance’ collection will be revealed to the public in booth #154 of the Lafite Room at COUTURE Las Vegas - displayed outside of Europe for the first time. Make sure to stop by and experience the majesty of the Italian jewellery creator and his precious journey for yourself!

SPECIAL THANKS: ALESSIO BOSCHI FOR SPONSORING THIS ARTICLE