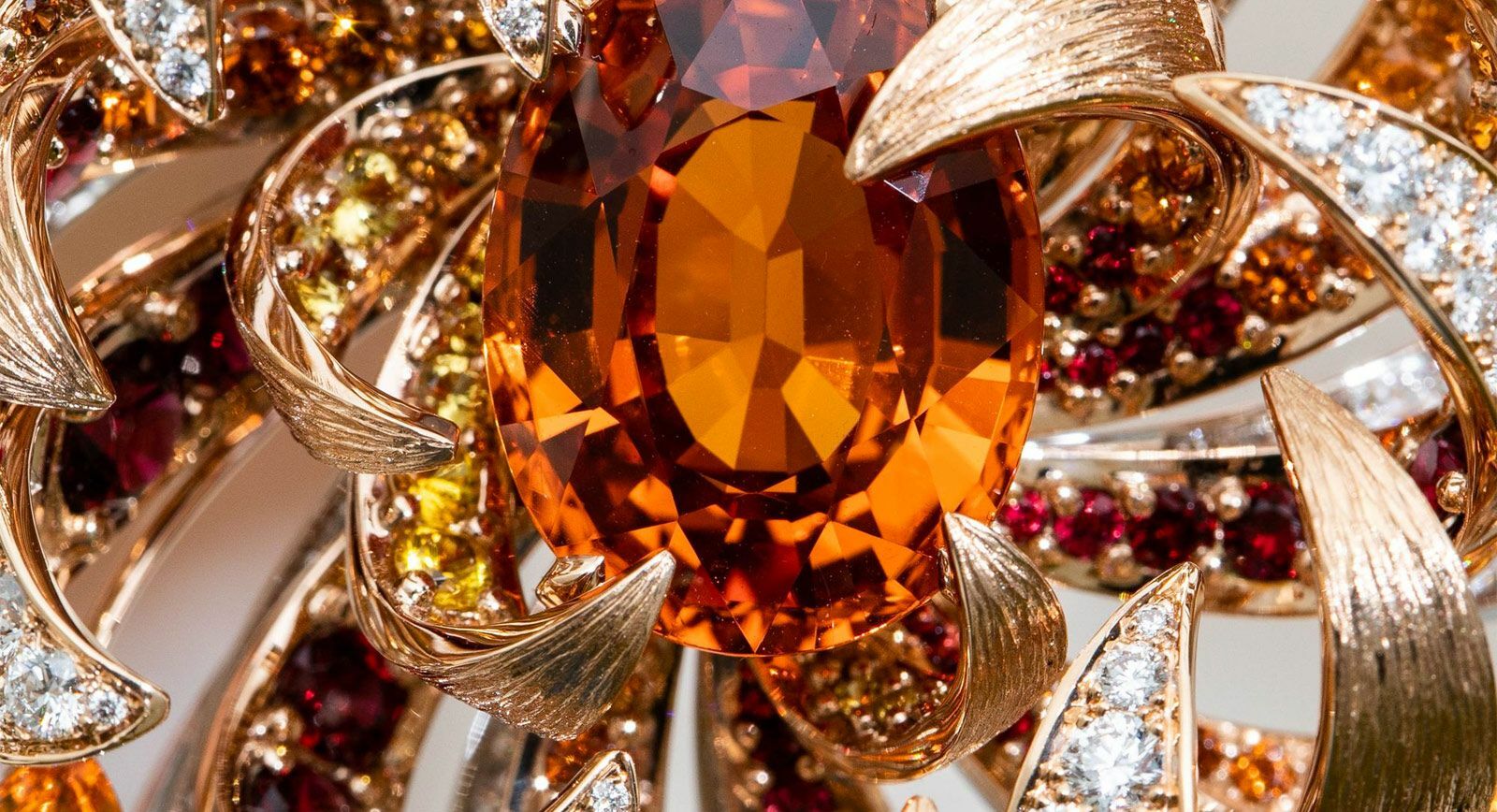 The French jewellery house Chaumet has introduced a new collection of fine jewellery entitled ‘Les Ciels de Chaumet’ (‘The Heavens of Chaumet’), dedicated to the sky above us, and paintings by many great artists that have drawn inspiration from these heavens.

Since the 19th century, Chaumet craftsmen have been creating jewellery inspired by the firmament: diadems, tiaras, necklaces, brooches and ear pendants have repeatedly referred to this source of creative inspiration. Each piece - although playing on the same theme - is rich in its own unique ingenuity and symbolism. In the new collection, the heavenly stars, the shining orb of the sun, the moon’s delicate crescent, flocks of fluttering birds and even tremendous thunderclouds and lightening are reconsidered with particular elegance and seamlessly incorporated into highly modern designs. 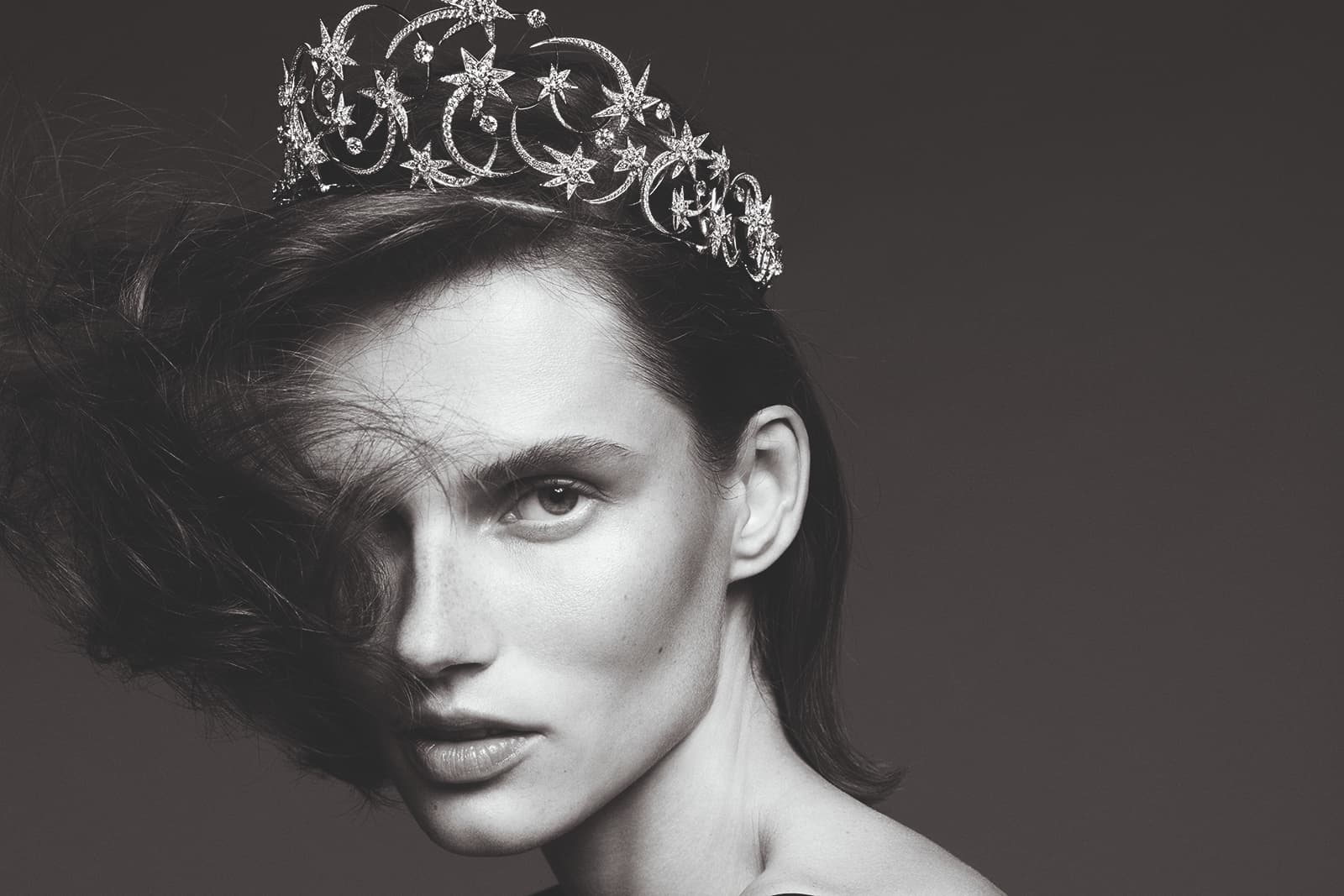 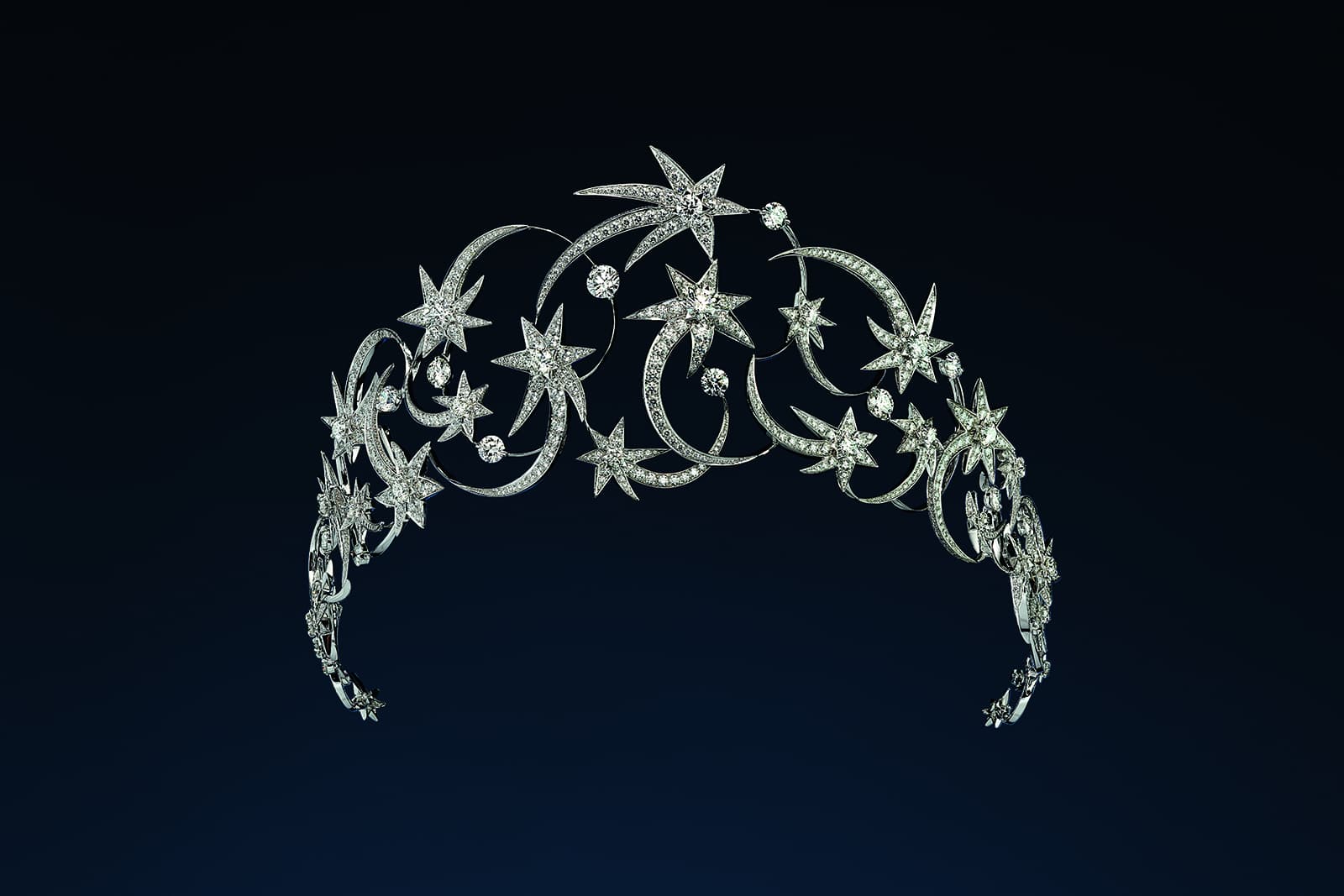 ‘Les Ciels de Chaumet’ includes bracelets, brooches, pendants, lush necklaces, cocktail rings, small studs or long earrings, as well as several watch models and even two tiaras. For the purpose of simplicity, the jewels in the collection have been divided into four main chapters. The pieces of ‘Les Caprices du Ciel’ depict the many moods of the sky, the fluffy clouds and the thunderstorm sky, ‘Les Couleurs du Soleil’ embody the sky’s plethora of rich colours ranging from the golden like sun, fiery colours of sunset and dawn, to various shades of blue at night time. ‘Les Fulgurances du Ciel’ is an ode to the stars that sparkle in the night, while ‘Les Habitants du Ciel’ is a tribute to our feathered friends who soar effortlessly overheard. 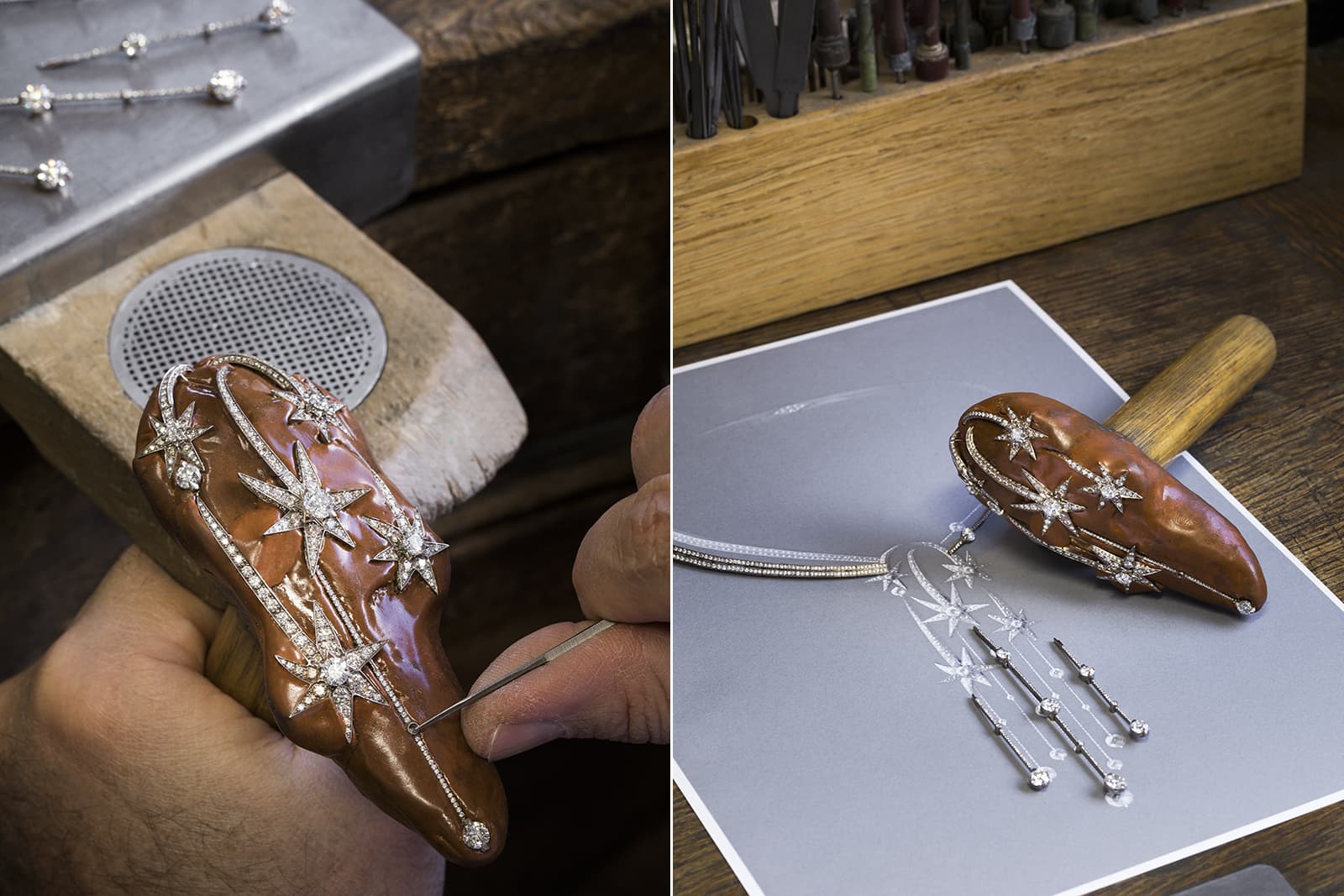 All of the jewellery in the collection is made of white, yellow or pink gold and inlaid with a myriad of precious stones to convey the variety of shades in the sky, depending on the ever-changing weather. Here you will find diamonds and chrysoberyls, multi-coloured spinels and sapphires of all kinds of shades, opals and tourmalines. As is customary in fine jewellery, some of the work is adorned by rarer gems that are impressive for their inordinate carat weight. For example, the Imperial topaz in the 'Lueurs d'orage' necklace weighs 37.68 carats, the Ceylon gold sapphire in the 'Nuages d'or' necklace weighs in at 12.88 carats, the Fancy Intense Yellow diamond in the 'Soleil Glorieux' ring reaches 8.43 carats, while the spessartine garnet in the 'Soleil de Feu' pendant necklace totals 18.30 carats. 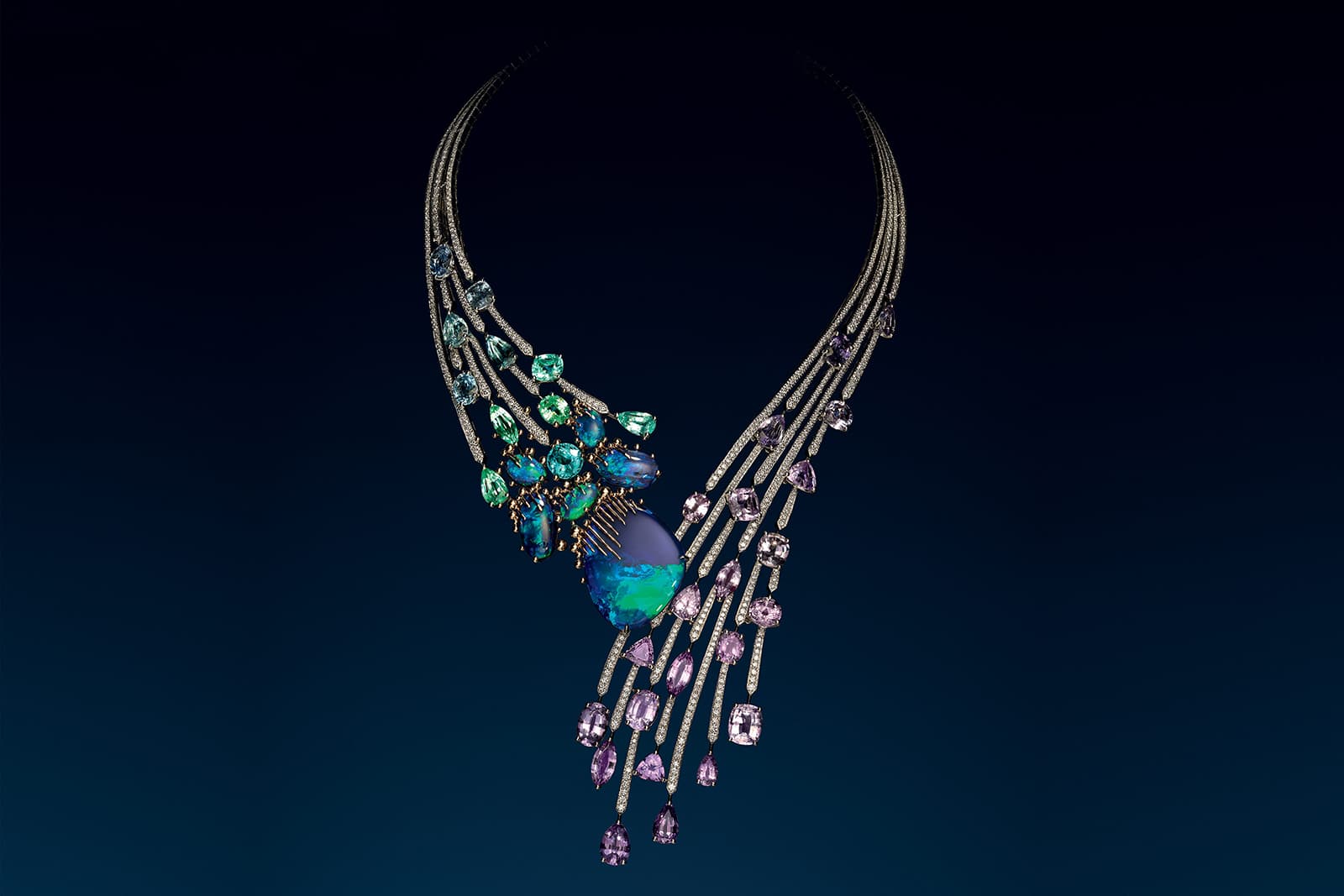 Undoubtedly, my favourite piece of this collection is the colourful and extremely expressive ‘Passages’ necklace, made of white and pink gold with 6 Australian black oval cut opals, the largest of which weighs a staggering 28.11 carats. The piece is complemented by Brazilian Paraiba and Mozambique Paraiba-type tourmalines in various shades, as well as diamonds. All of the stones are laid out in planned colour order – a beautiful composition that conveys a sense of gradation. It forms something truly breath-taking. The inspiration for this series was Vincent Van Gogh's 1890 ‘Wheat Field with Crows’. The design of this necklace is echoed in several accompanying earrings and a ring. 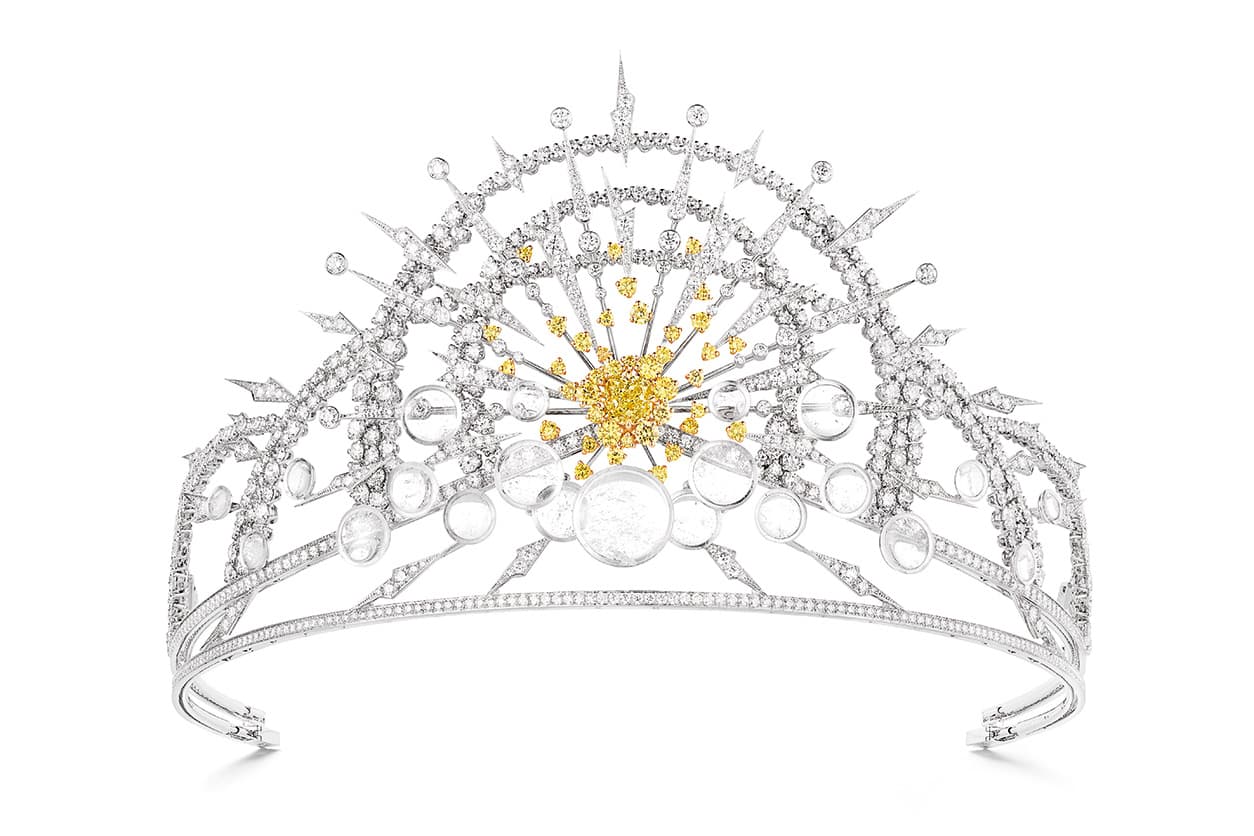 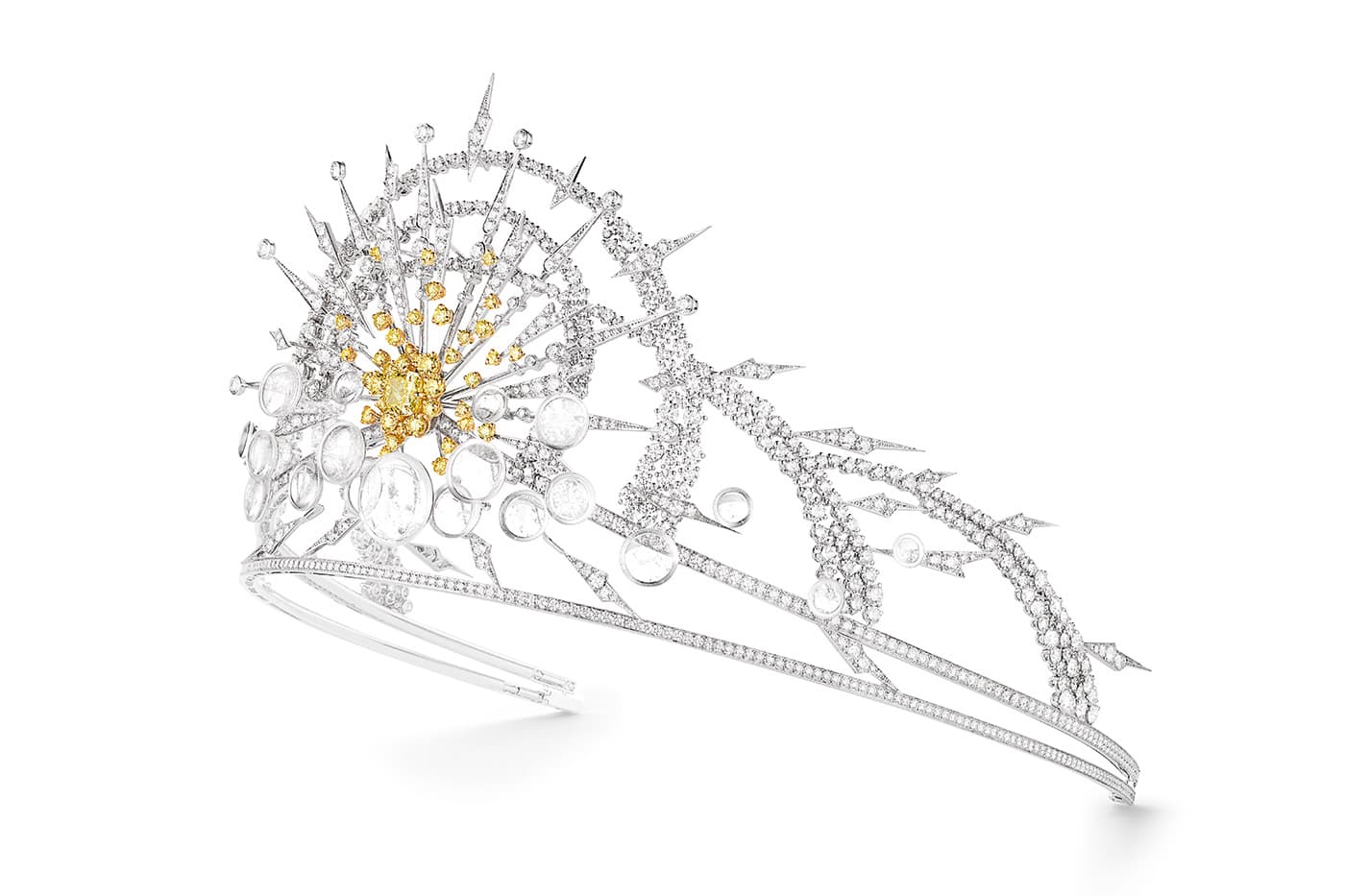 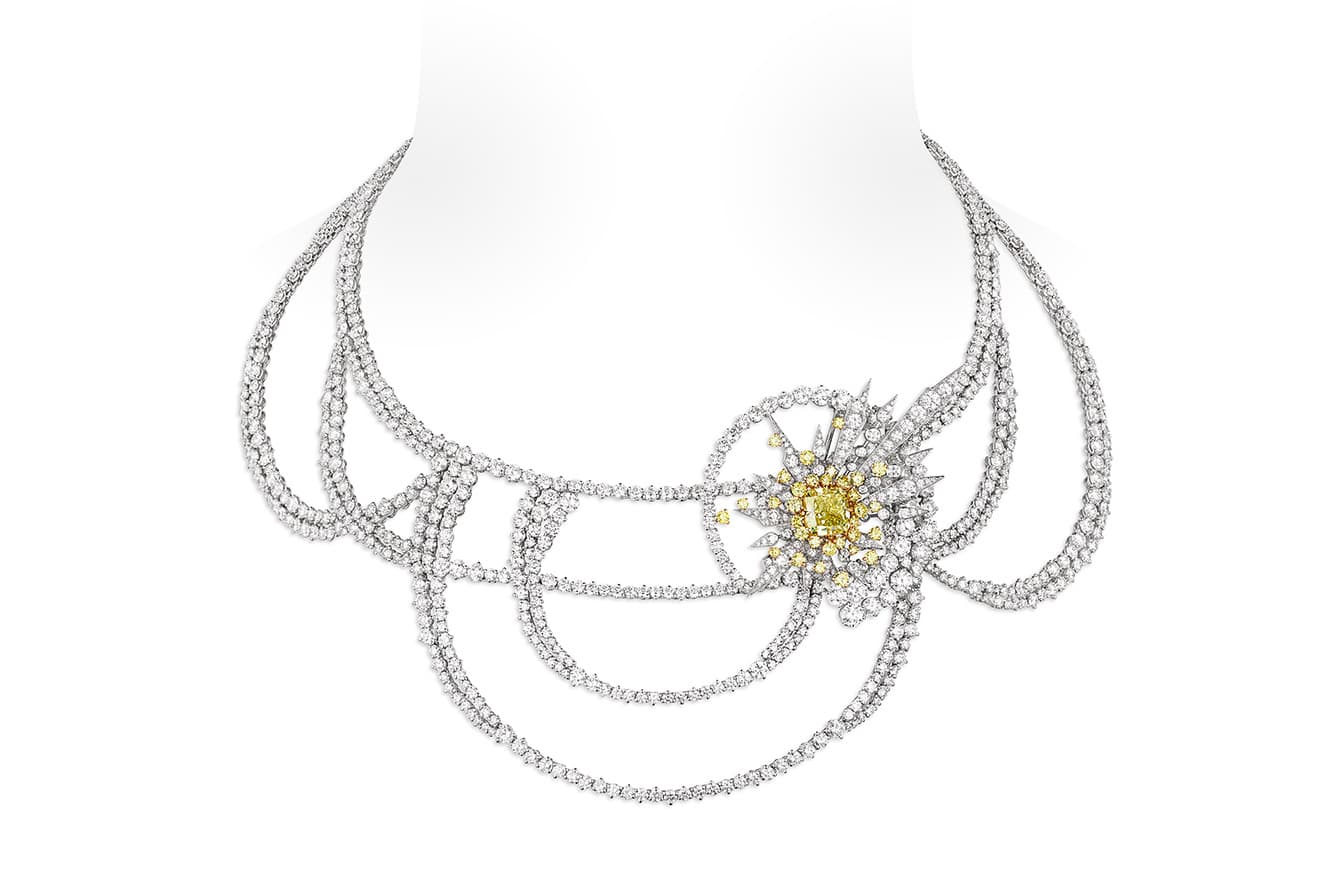 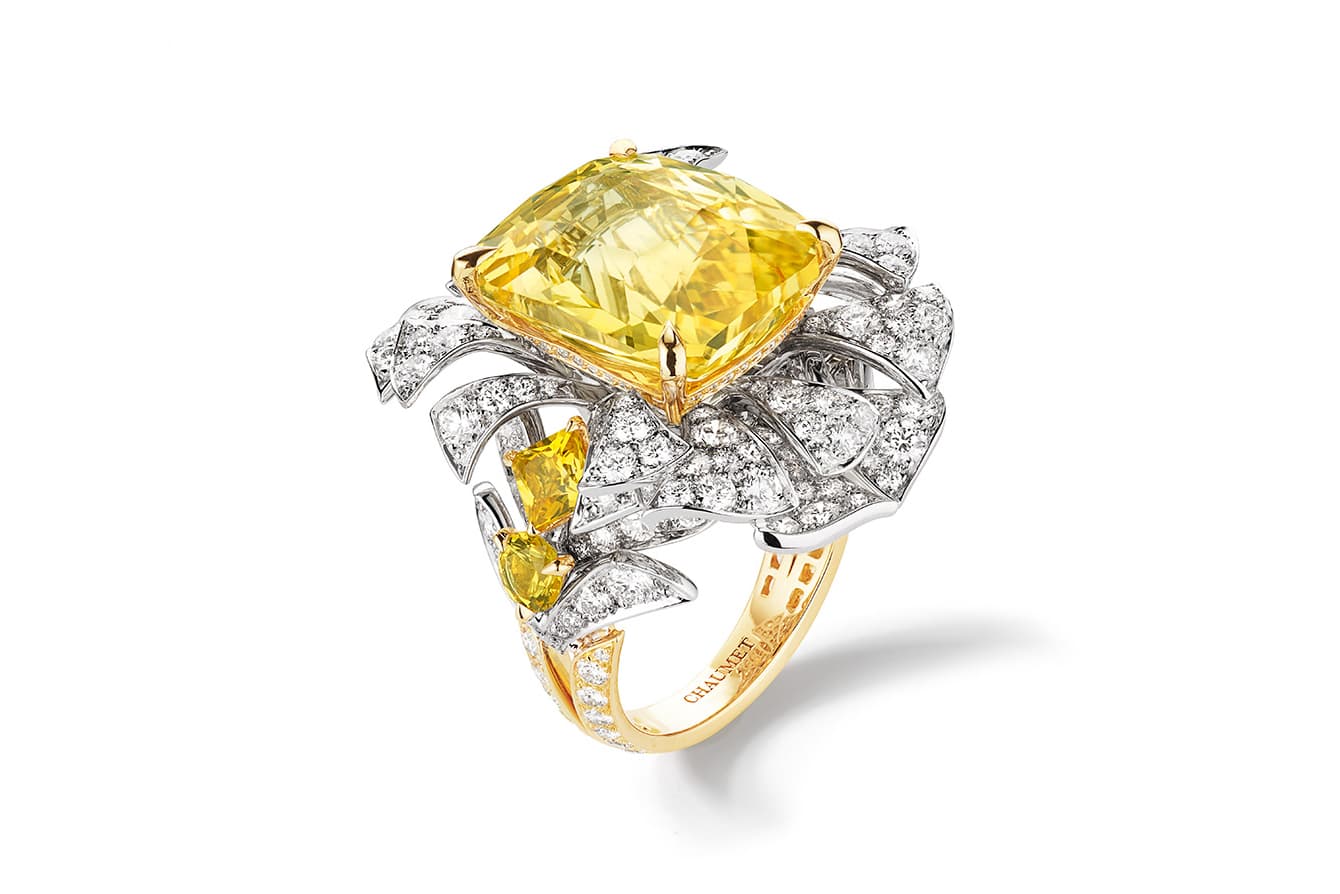 No less impressive – albeit very different in appearance – is the effect produced by the  ‘Soleil Glorieux’  tiara, inspired by the painting ‘The Sower with Setting Sun’ (1888), also by Van Gough. It is adorned with a 2.51 carat yellow cushion cut Fancy Intense diamond, as well as colourless diamonds and rock crystals. 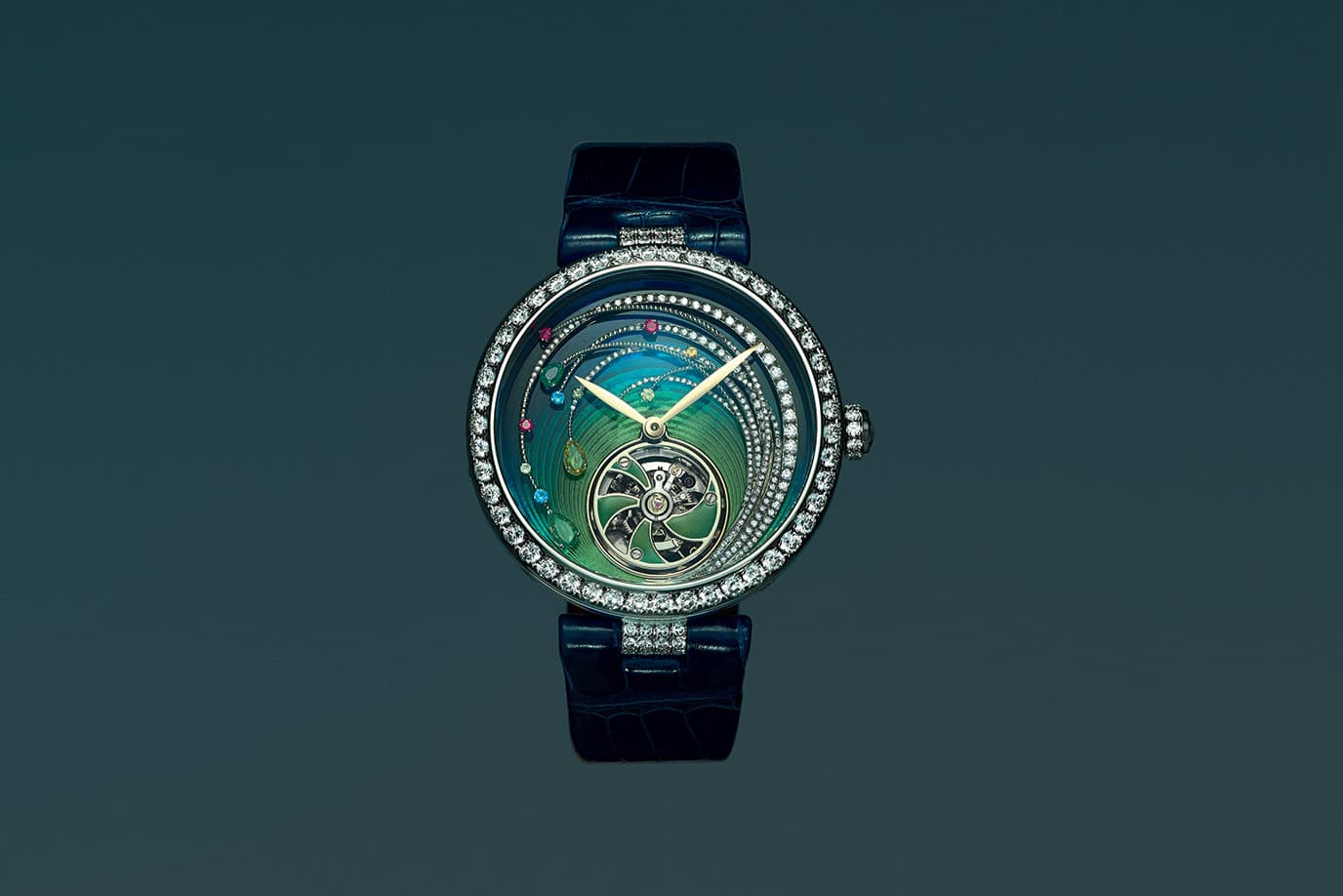 The ‘Envol’ necklace (meaning ‘Flight’), decorated by three small soaring birds, conveys a mood of serenity and life at its most peaceful. It is made of white and yellow gold and adorned with pear-shaped diamonds ranging in size from 2.02 carats to 0.72 carats. We also find marquise cut tsavorites, round yellow and green sapphires, as well as brilliant cut diamonds. As earlier, there are a number of other pieces that play on the same theme: rings, earrings and brooches. The inspiration here is Joseph Chaumet’s sketches from the 1880s and 1890s, which can be found in the jewellery house’s archives. 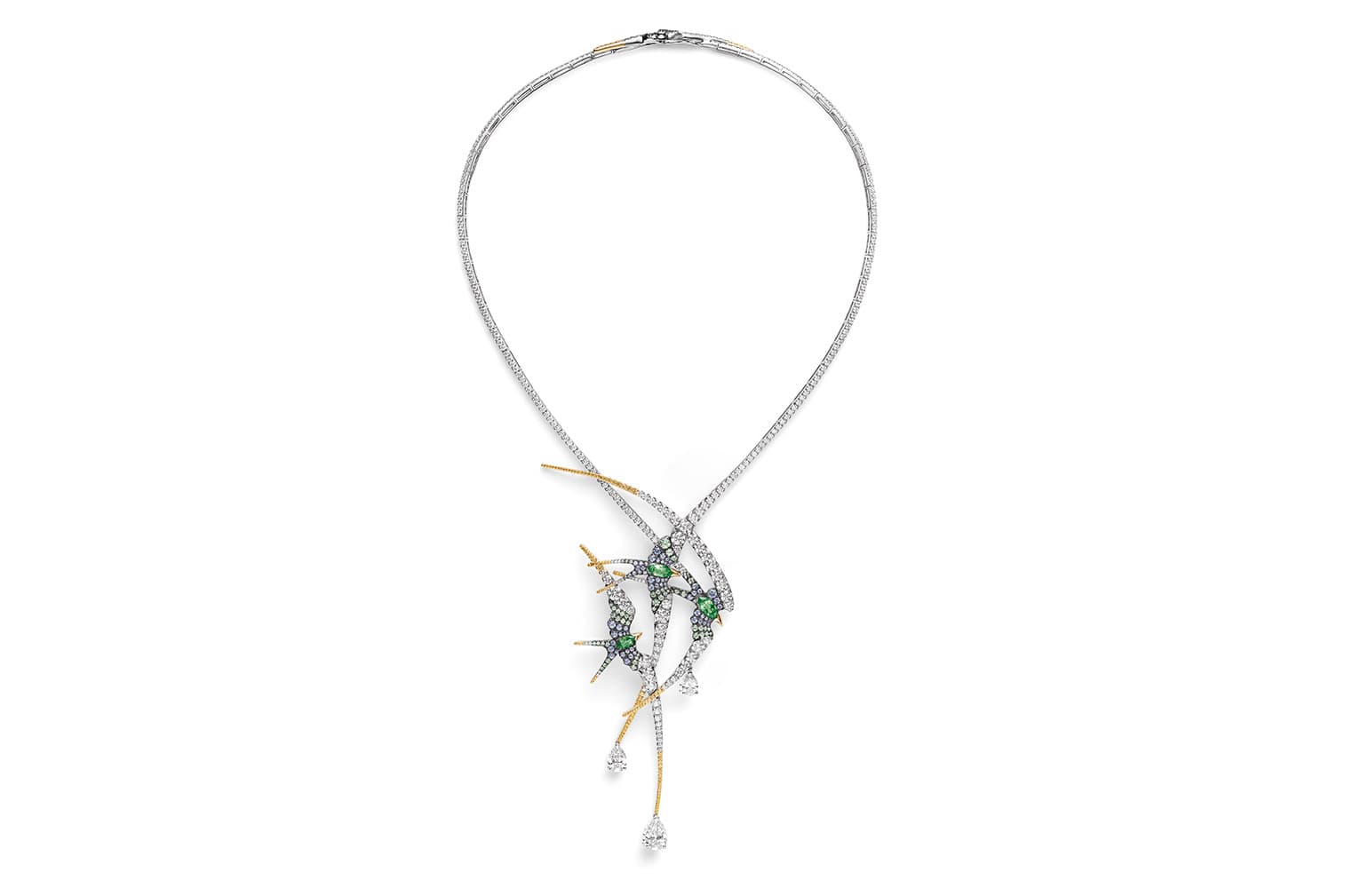 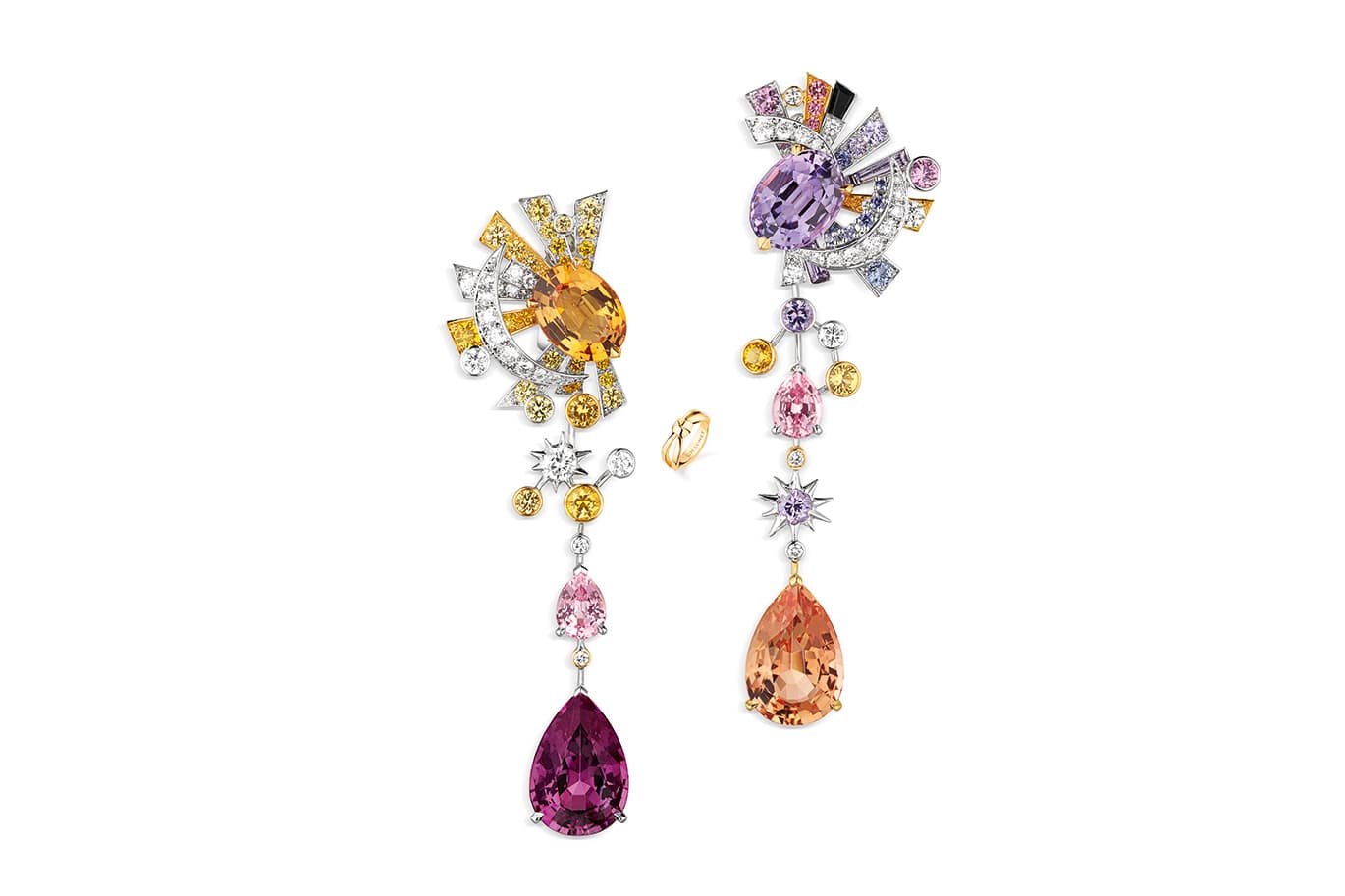 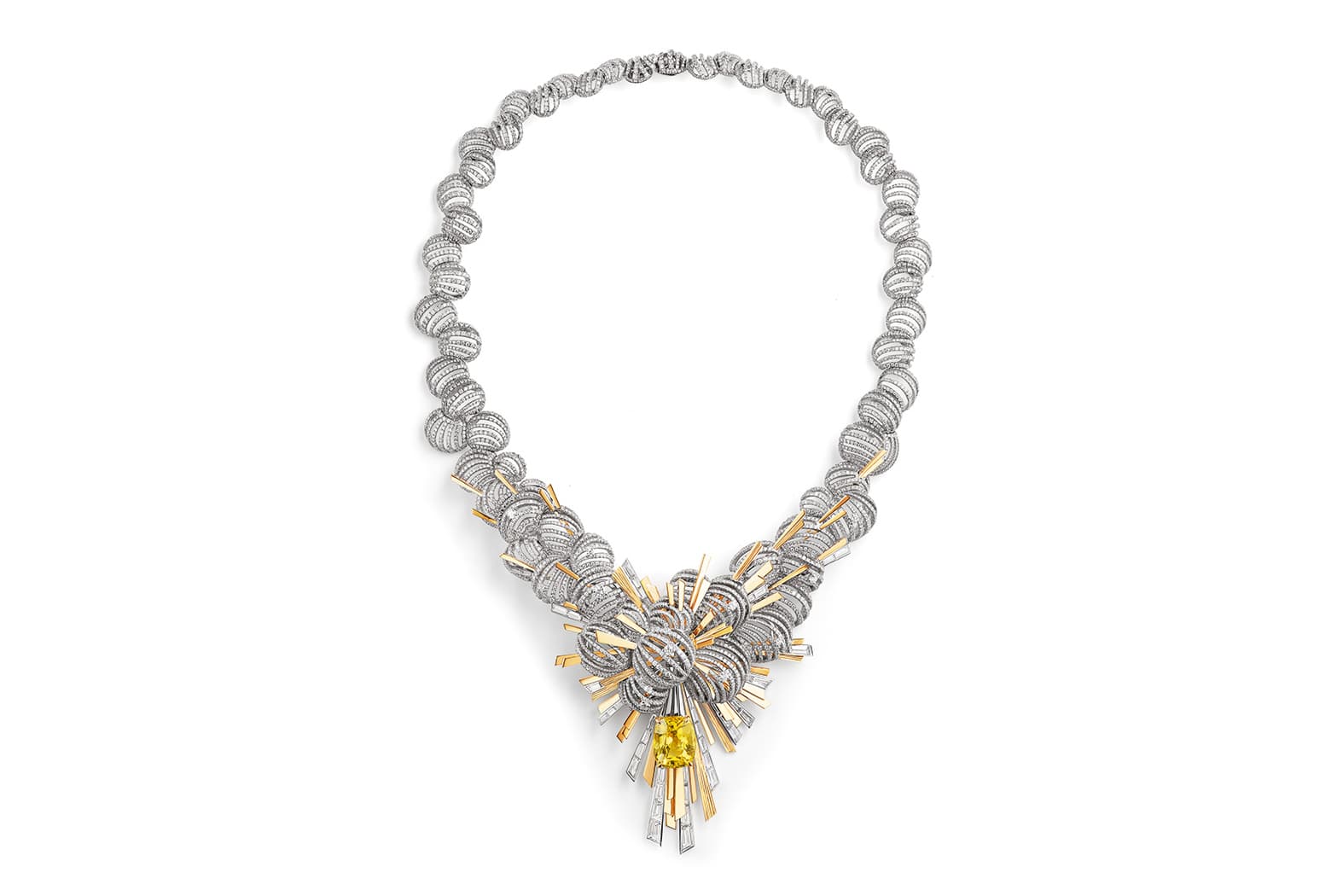 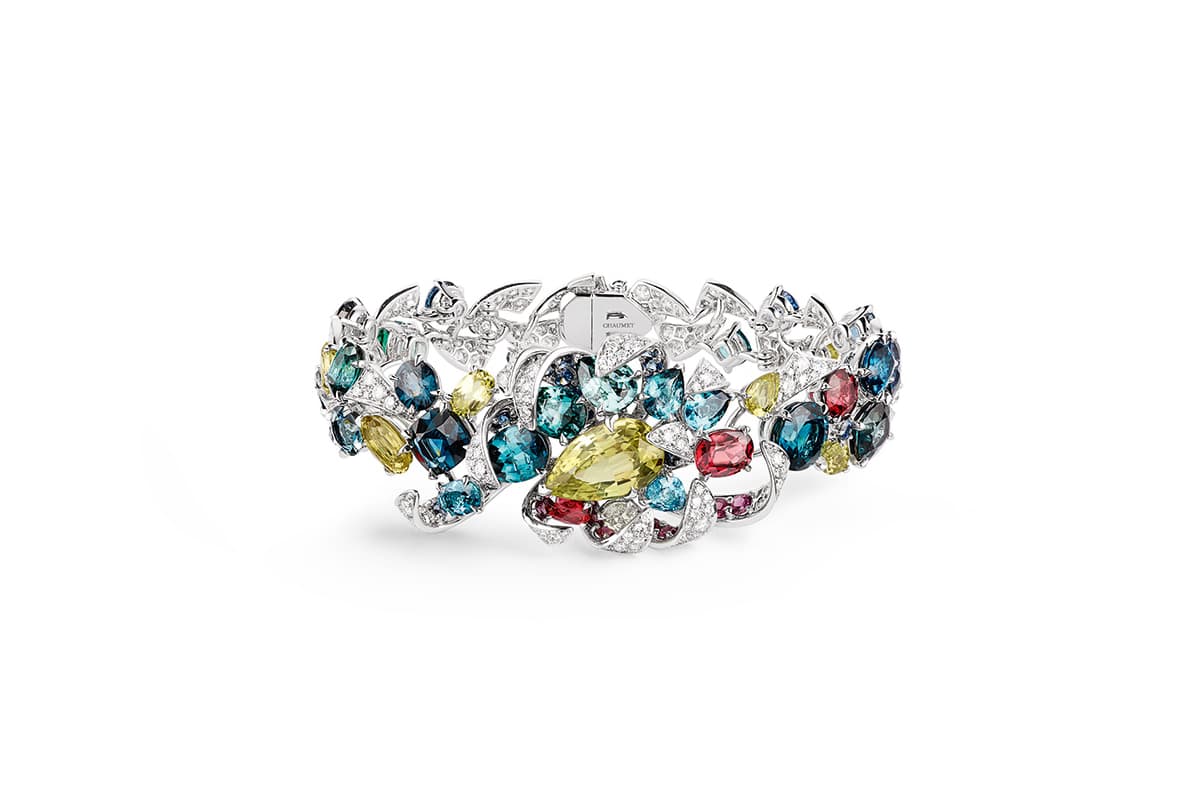 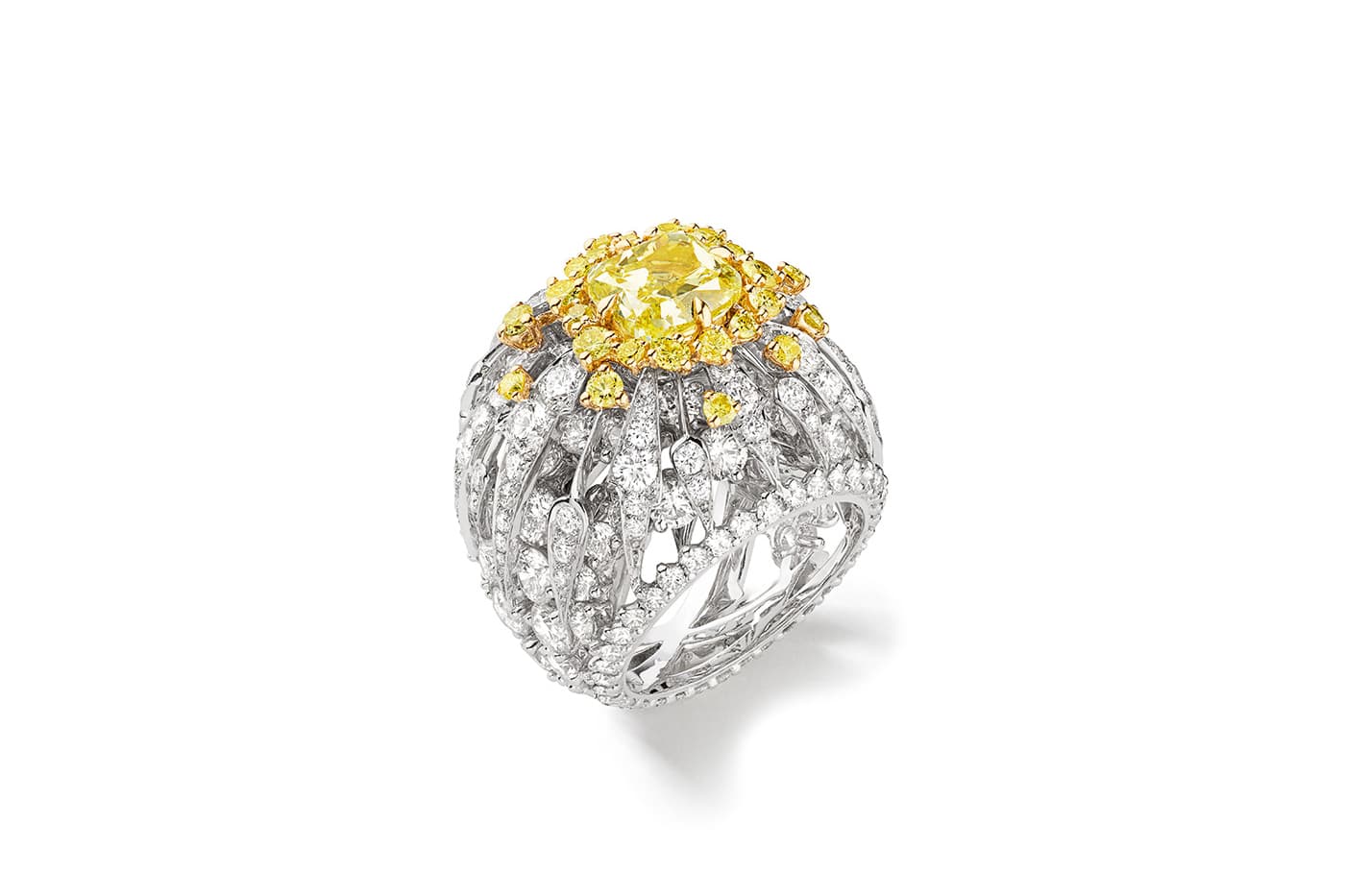 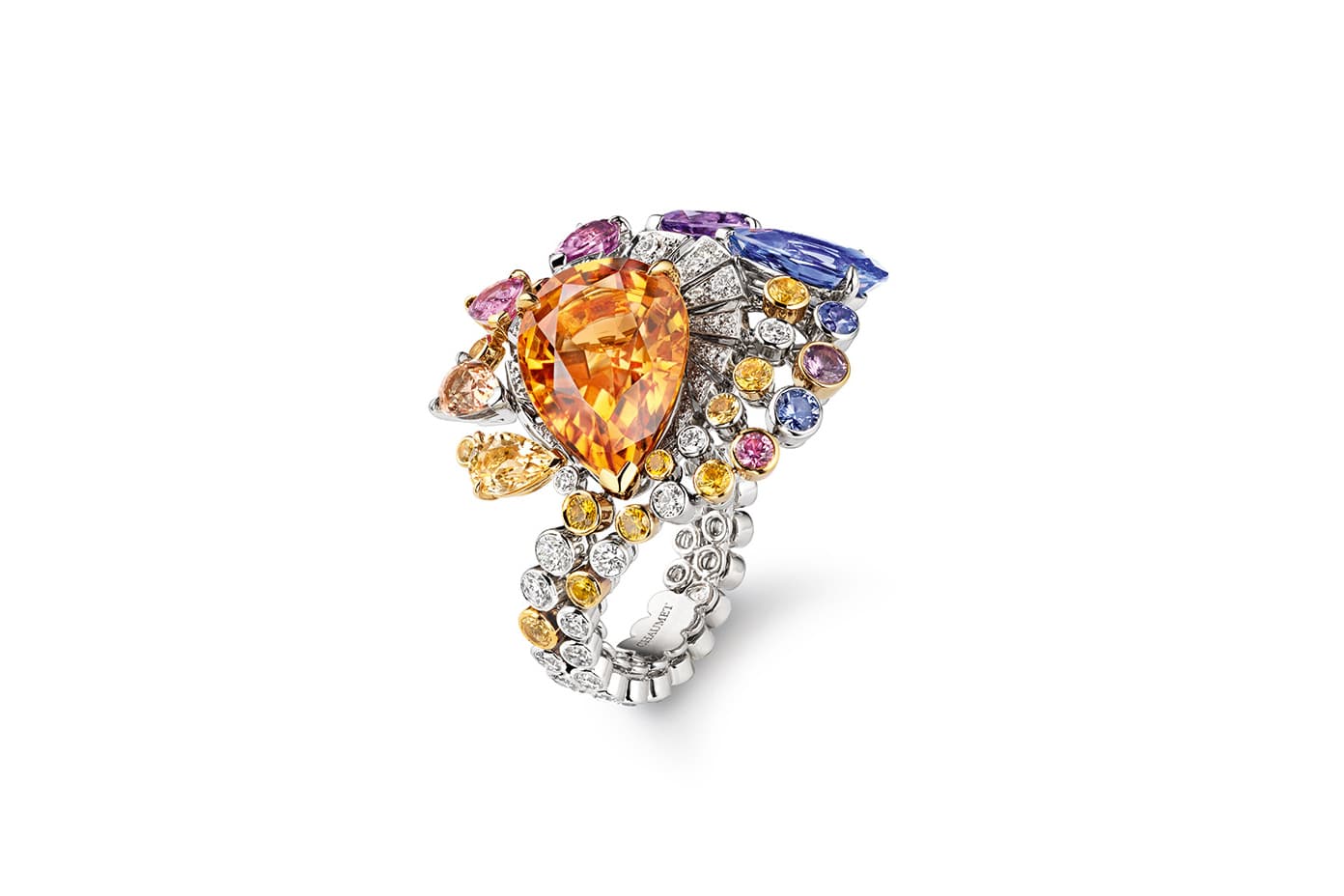 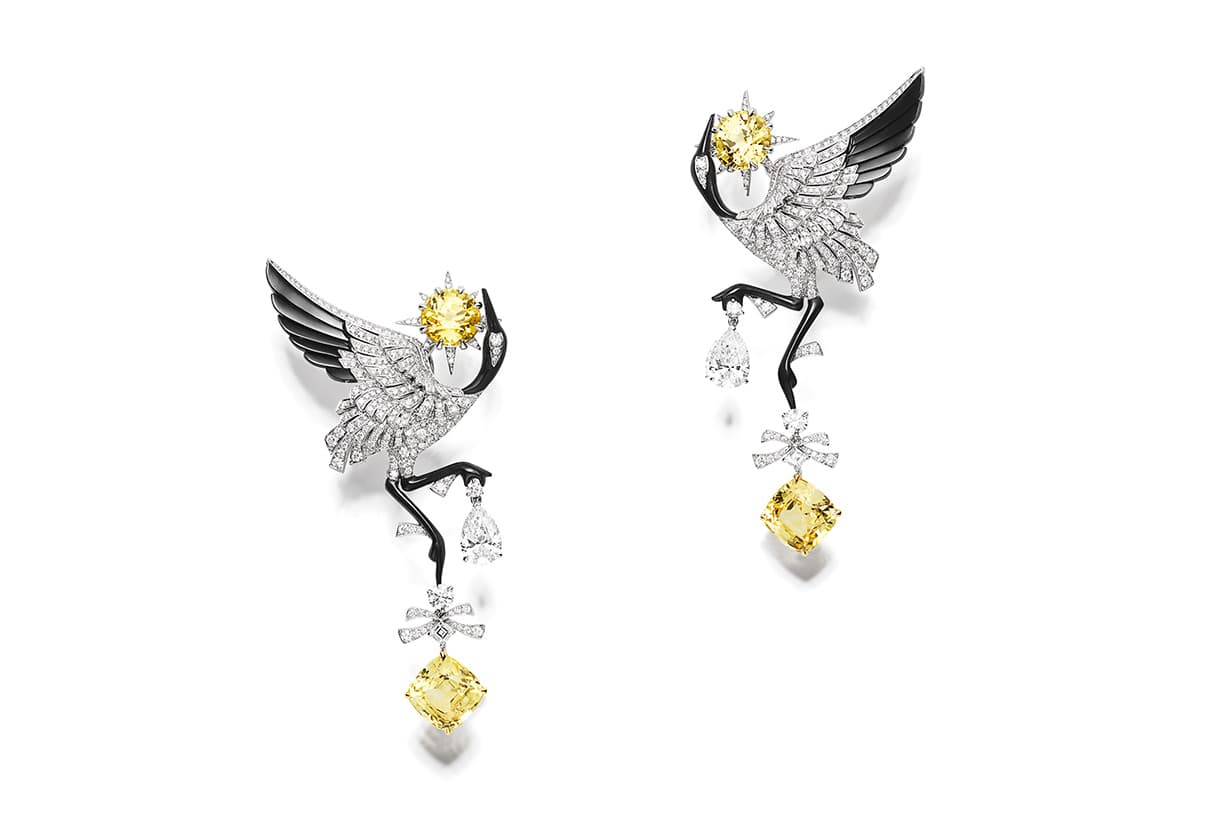 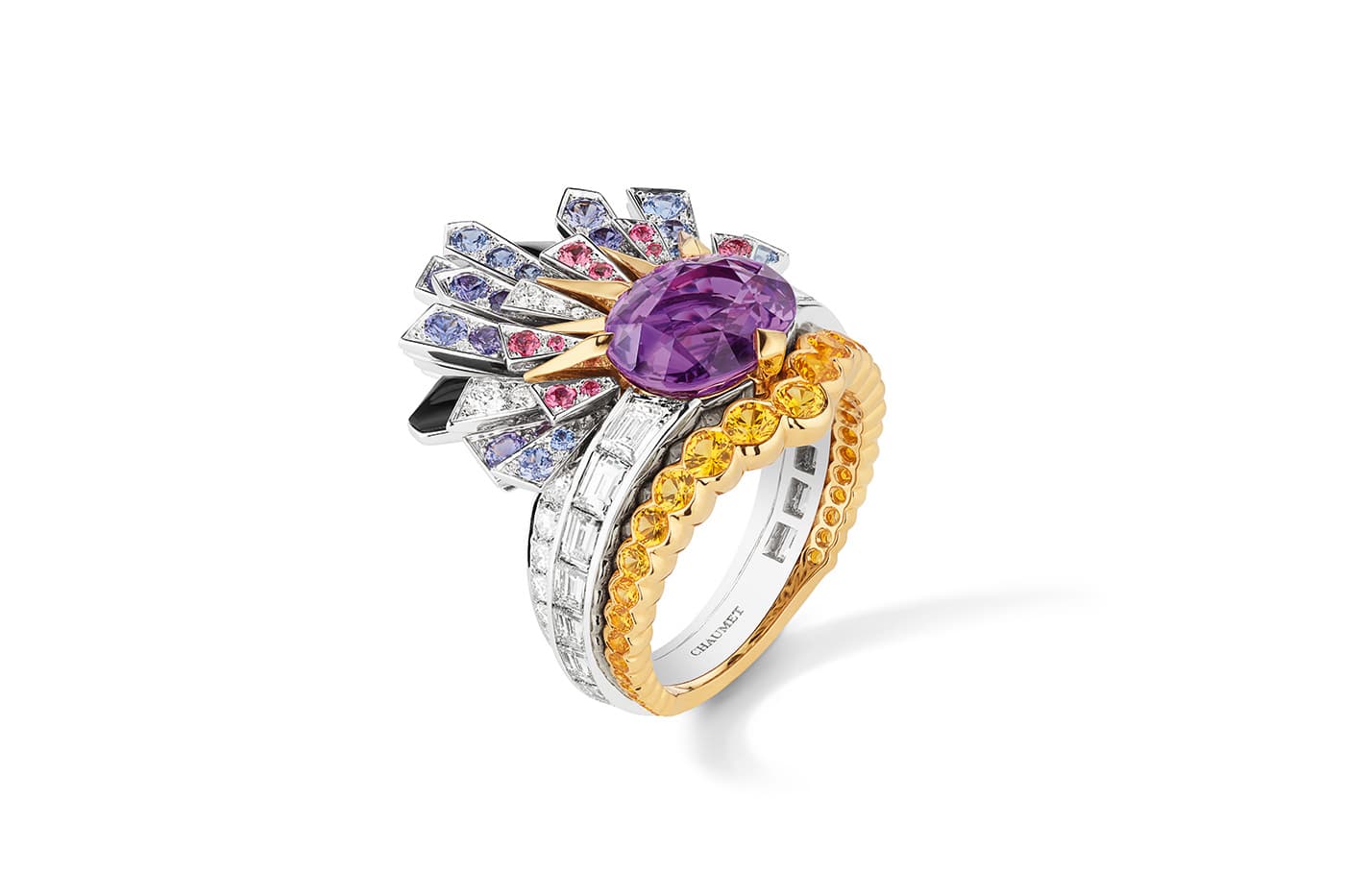 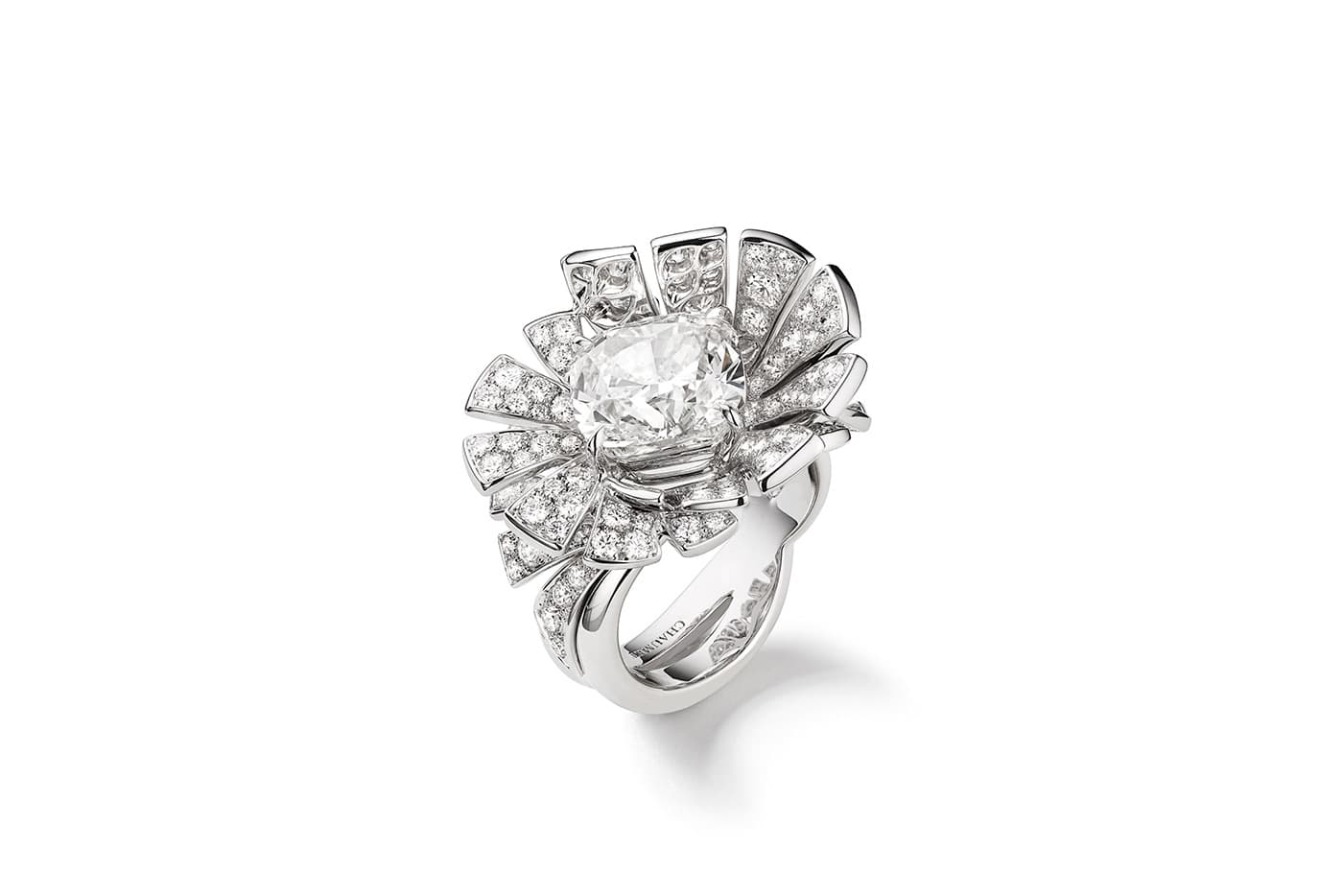 As is evident, behind each piece in this collection, there is a rich history not only of the jewellery house Chaumet, but also of the world of fine art from which the collection draws its inspiration. ‘Les Ciels de Chaumet’ is enormously diverse: one kind of creativity flows seamlessly into another, and gives rise to masterpieces of amazing beauty.