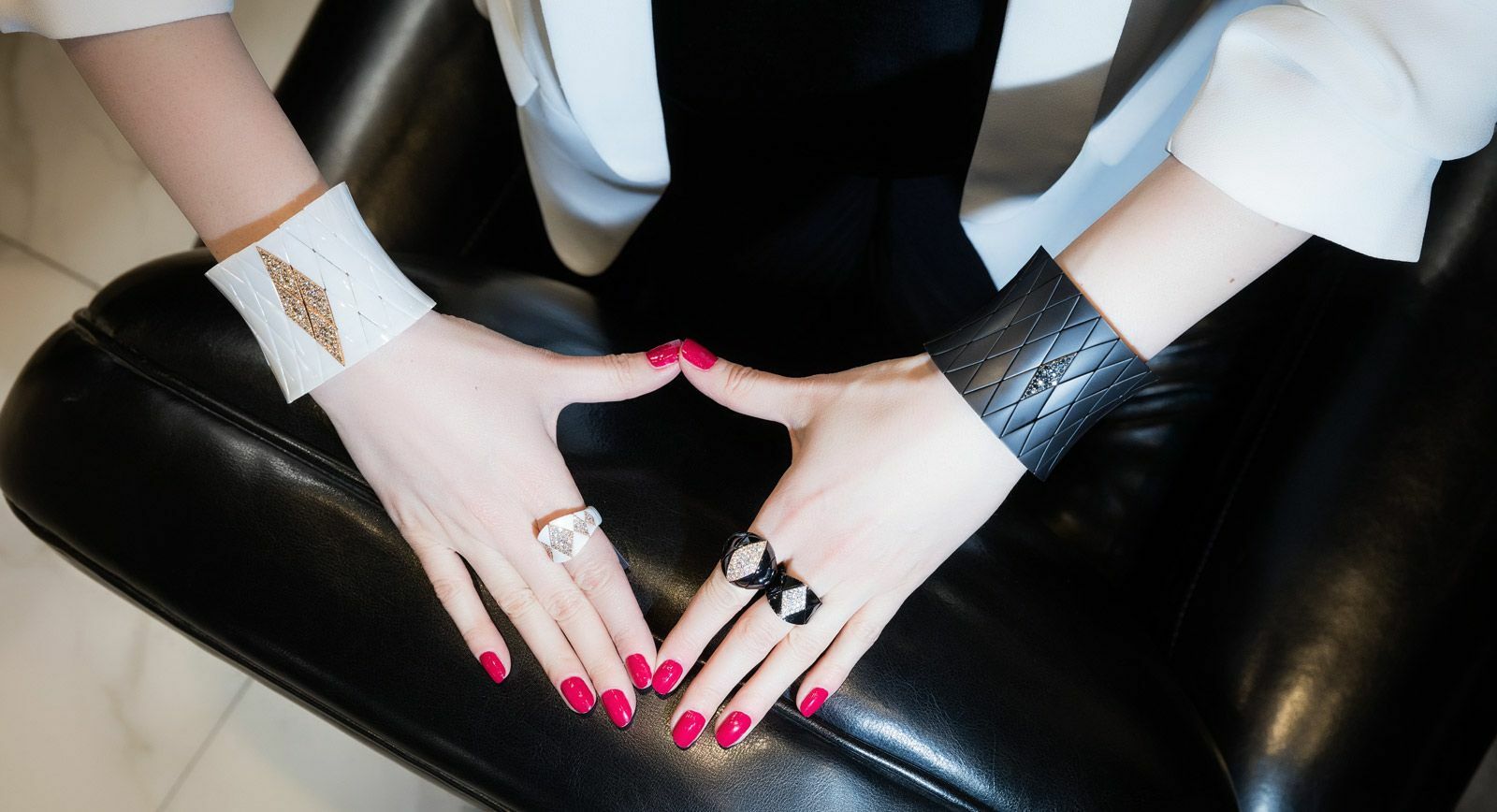 Roberto Demeglio – All About Innovation

Different fashion trends and the desire to stay with the times are changing our attitude to how we wear jewellery. It has ceased to be an adornment for special occasions and is becoming more and more part of everyday life. This explains why the modern woman not only wants her jewellery to look spectacular but also for it to be comfortable to wear. The Italian designer (or perhaps a more accurate term is “jewellery engineer”) Roberto Demeglio is constantly thinking up new ways for his jewellery to “fit like a glove”. I wanted to see for myself whether his pieces are really ones that “you simply don’t want to take off” and paid a visit to Roberto’s salon at Baselworld.

Roberto Demeglio, a graduate of the Benvenuto Cellin Art School, opened his own jewellery laboratory in 1984 near to the workshop of his father, Giuseppe. It was here that he began to develop his own jewellery “methods”, many of which he would later patent and would garner high praise at international competitions. From the moment of its creation Roberto Demeglio’s laboratory has been an inexhaustible source of original ideas, where the special attention paid to design and new technologies has led the jeweller to quickly gain the keen attention of a discerning audience.

In the course of his relatively short history, Roberto Demeglio, has already managed to register three patents relating to jewellery techniques and technologies. The first of these is for an elastic steel spring, allowing jewellery to be flexible and delicate. A bracelet therefore, regardless of its width, wraps around the wrist like a curling ribbon of diamonds. Both a thin tennis and wide cuff version sit as comfortably as each other on the arm. I especially liked wearing them together, making a spectacular “cocktail” of various geometric patterns with a monochromatic palette. 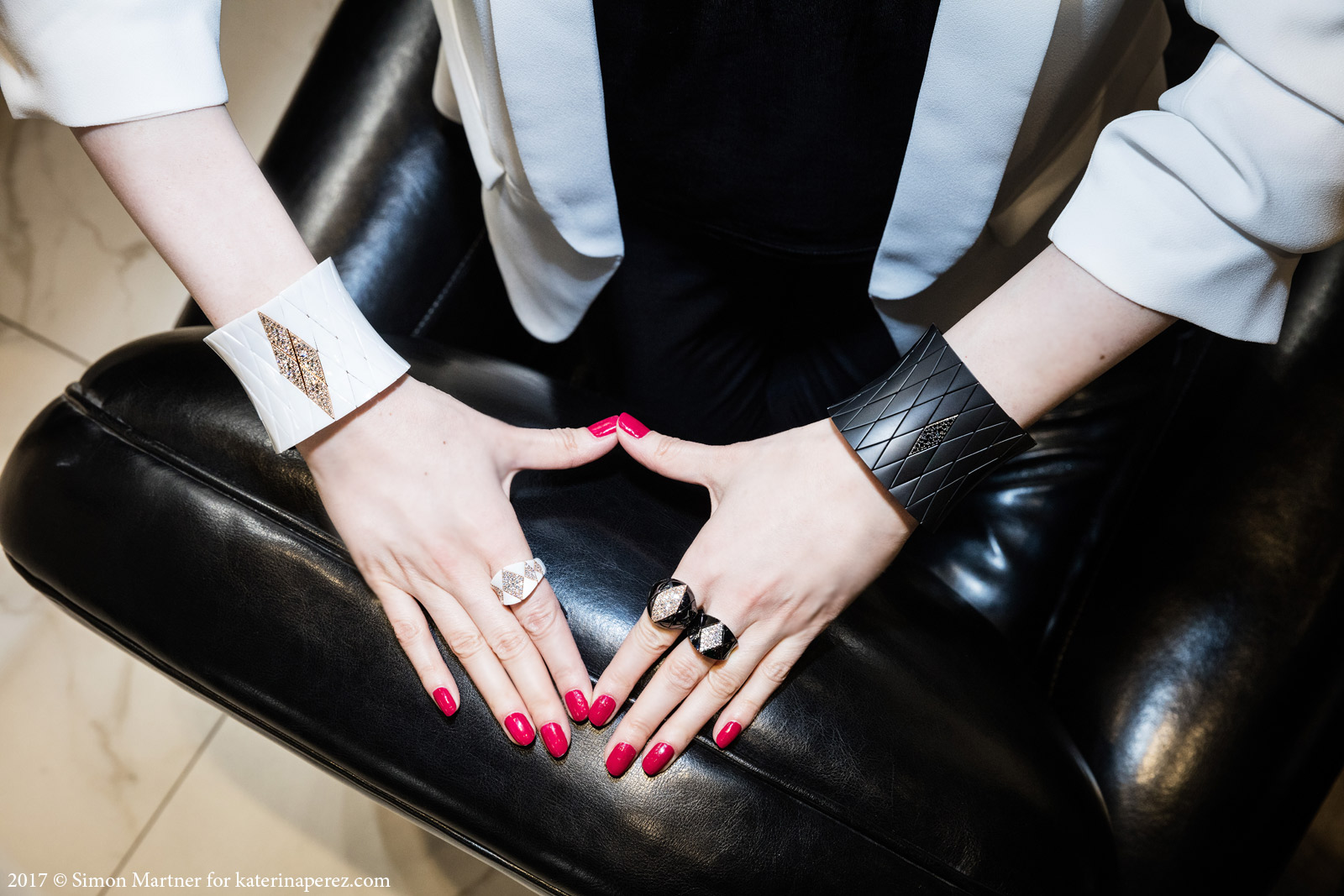 The Italian’s second invention is the so called “Multimeasure” system. I learnt about this myself through asking Roberto’s wife to try on her ring with an impressive marquise-cut diamond. To my surprise, it was a good fit, although my finger is not the same size as that of Simona. It turns out that an invisible mechanism was built into the inner part of the ring’s shank, allowing the item to adapt according to finger size and to react excellently to changes in temperature or the weather. This means that any doubts the buyer or jeweller may have about a ring’s size vanish into oblivion.

Finally, Roberto’s third invention is a small spherical pillow which allows decorative elements to rotate playfully around a fixed central part. Thanks to this development a piece of jewellery ceases to be a frozen construction and becomes a mobile and coquettish piece, as with the jewellery in the Margherita collection. 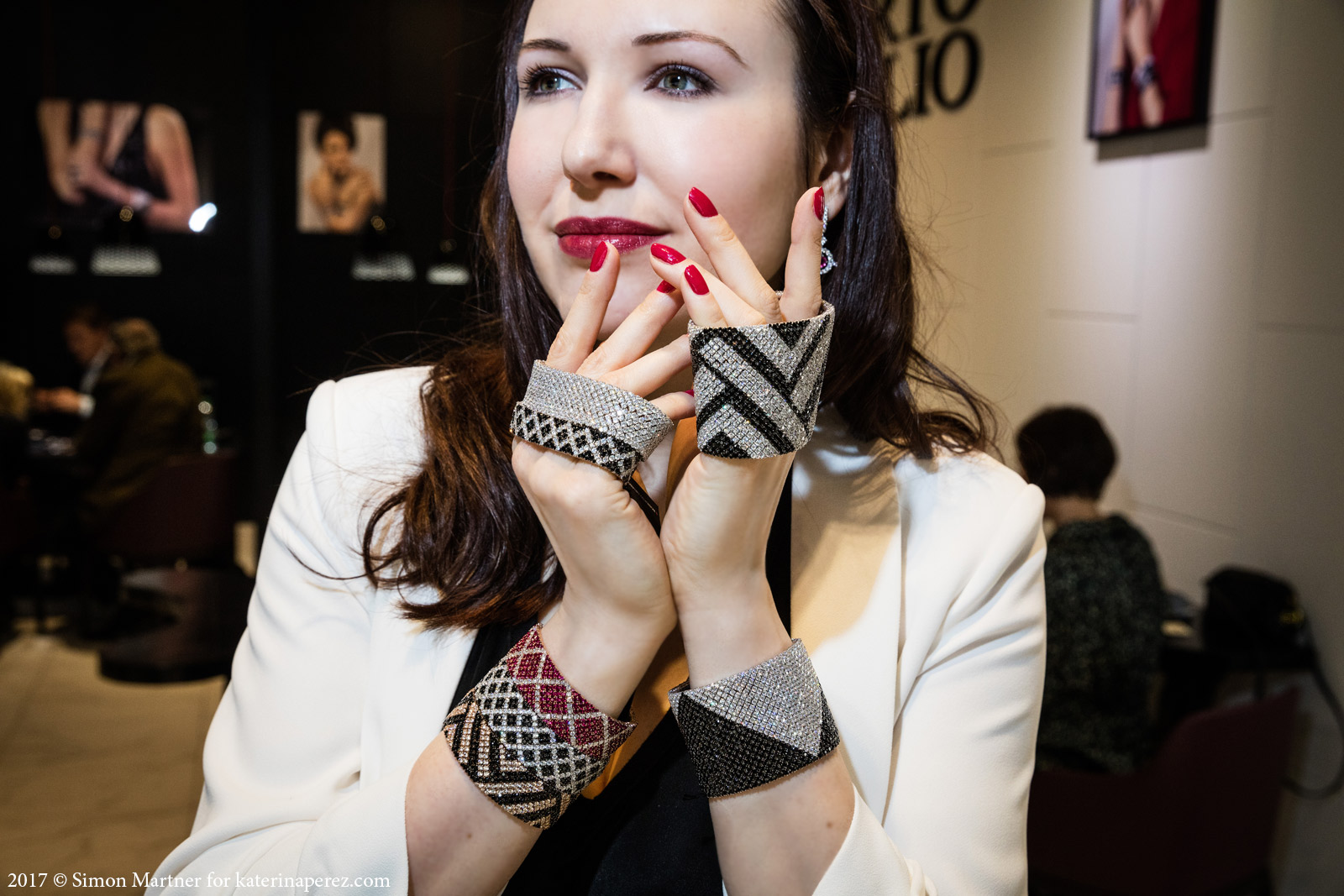 The uniqueness of Roberto Demeglio’s jewellery is not limited to the technical side of things. The Italian designer’s pieces are also recognisable for its use of rarely-seen jewellery materials: carbon fibre and ceramic. The latter is present in Roberto’s items in matte and polished form, and sometimes both simultaneously. Examples of this can be found in the Domino and Diva collections which consist of ordered squares and rhombuses, some of which are decorated with diamond inlays.

A series of prizes won at international professional competitions have also played a major role in the brand’s increasing fame. For instance, in 2008 and 2009 Roberto Demeglio won the Las Vegas Couture Design Awards, Town & Country competition and in 2012 won an award for “Best Male Jewellery Piece” at the Platinum Design Awards for the Kerouac bracelet. This year Roberto won the “Designer of the Year” award at the Inhorgenta exhibition in Munich for the Monalisa necklace. It is made from black and white diamonds which are woven together into a stretchy braid.

My verdict after meeting Roberto Demeglio is that his jewellery is a mix between precious pieces and fashion accessories, designed for men and women who want to stand out from the crowd. 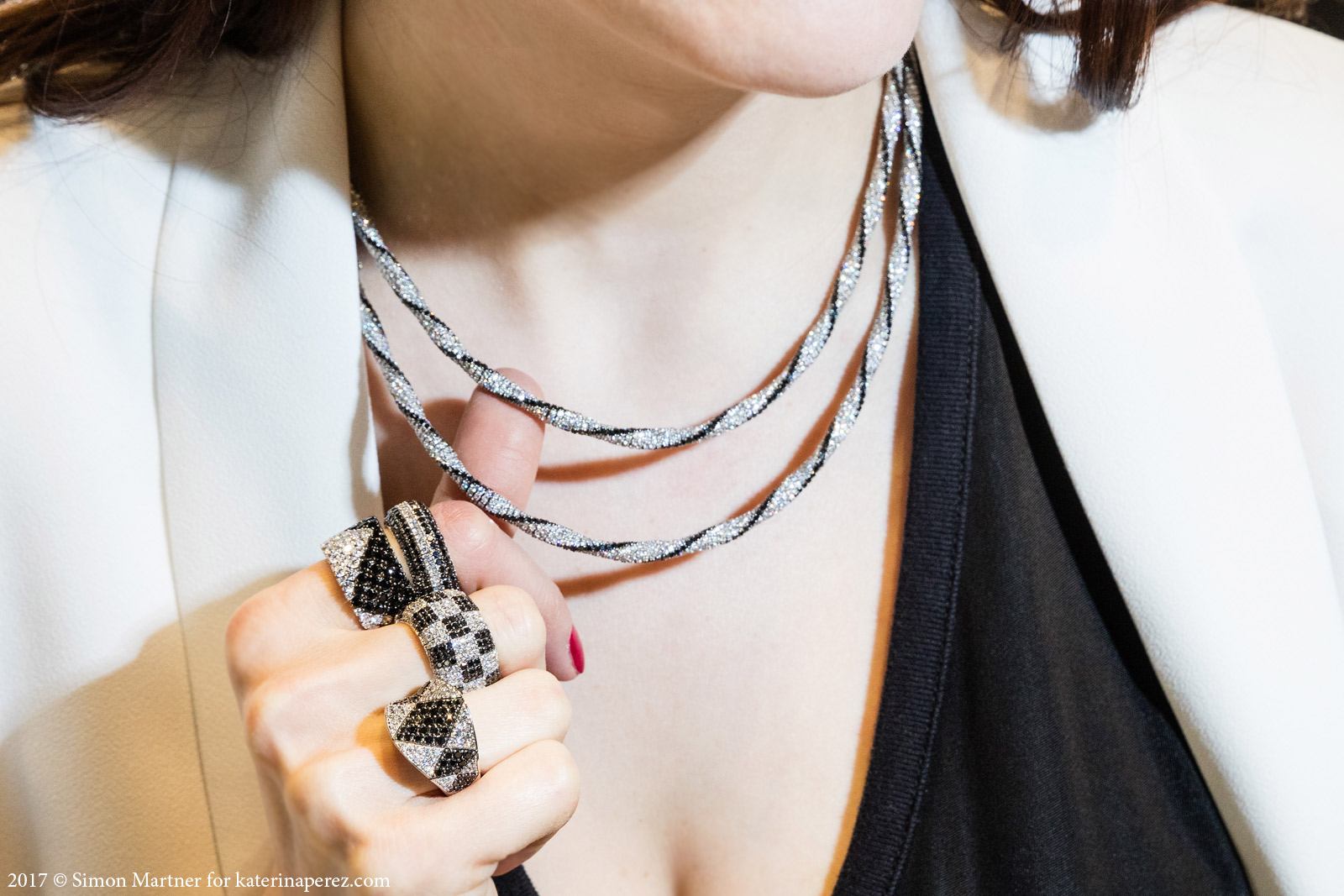 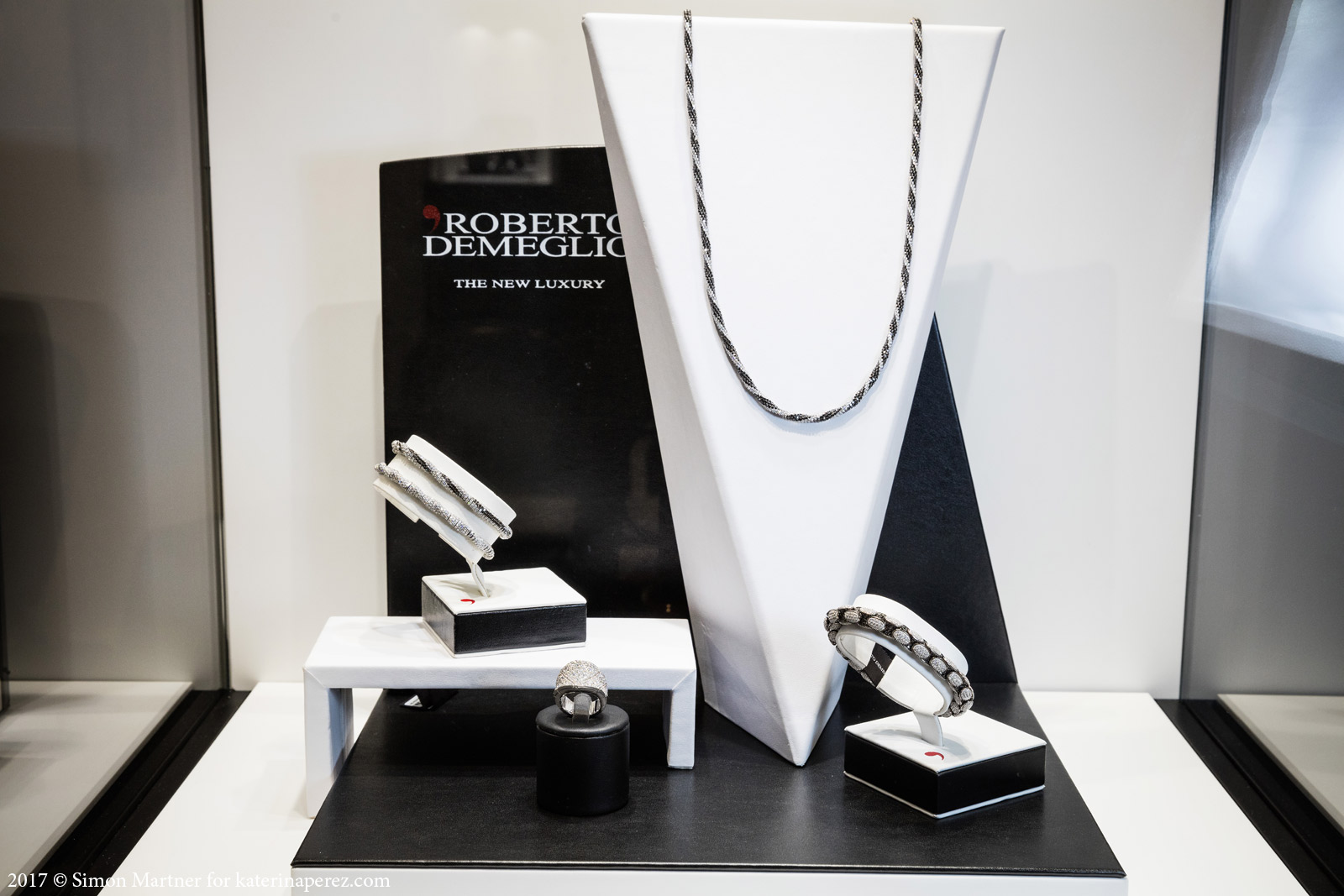