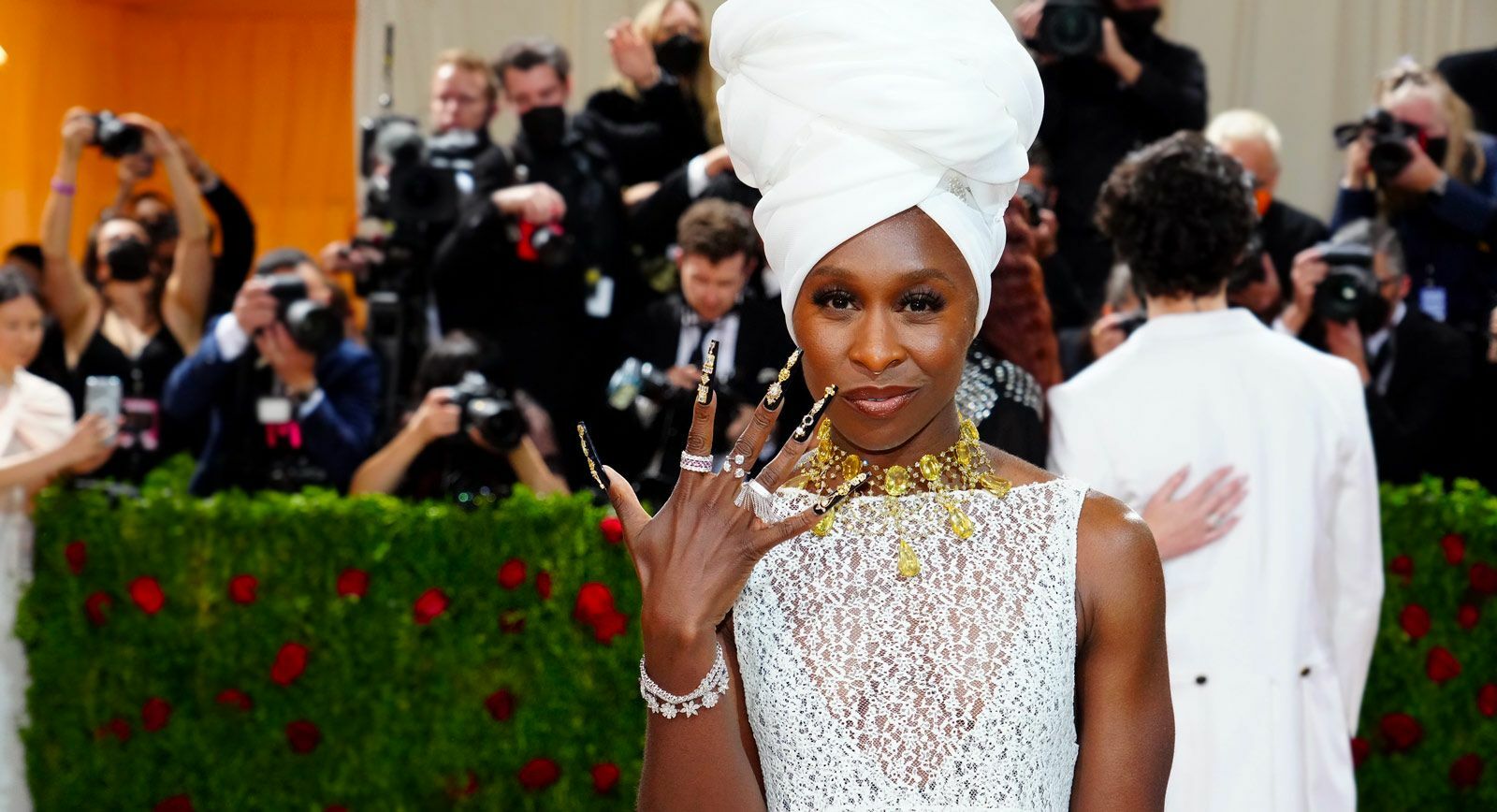 Sweeping layers of velvet, black lace, bustles, bleached eyebrows, and transformable gowns… it can only be the Met Gala! As always, our attention is firmly on the jewels and the brands that supplied the most high-profile celebrities with adornments. This year’s ‘Gilded Glamour’ theme, inspired by America's late 19th-century economic boom, was the perfect launchpad for finery. So, who delivered? Let’s take a closer look…

This year’s Met Gala – an annual fundraising evening for the Metropolitan Museum of Art's Costume Institute in New York – has transformed into somewhat of a costume party in recent years. But don’t see this as a criticism on my part! Fashion is a wonderful source of creativity and creativity that shouldn’t live in a box but be free to push boundaries and make a statement. Of course, the same sentiment applies to fine jewellery – it should have the opportunity to be worn and enjoyed as its master artisan intended. And what better place to give a jewel its moment than under the flashbulbs of the world’s press, on the red carpet, surrounded by Hollywood’s elite! 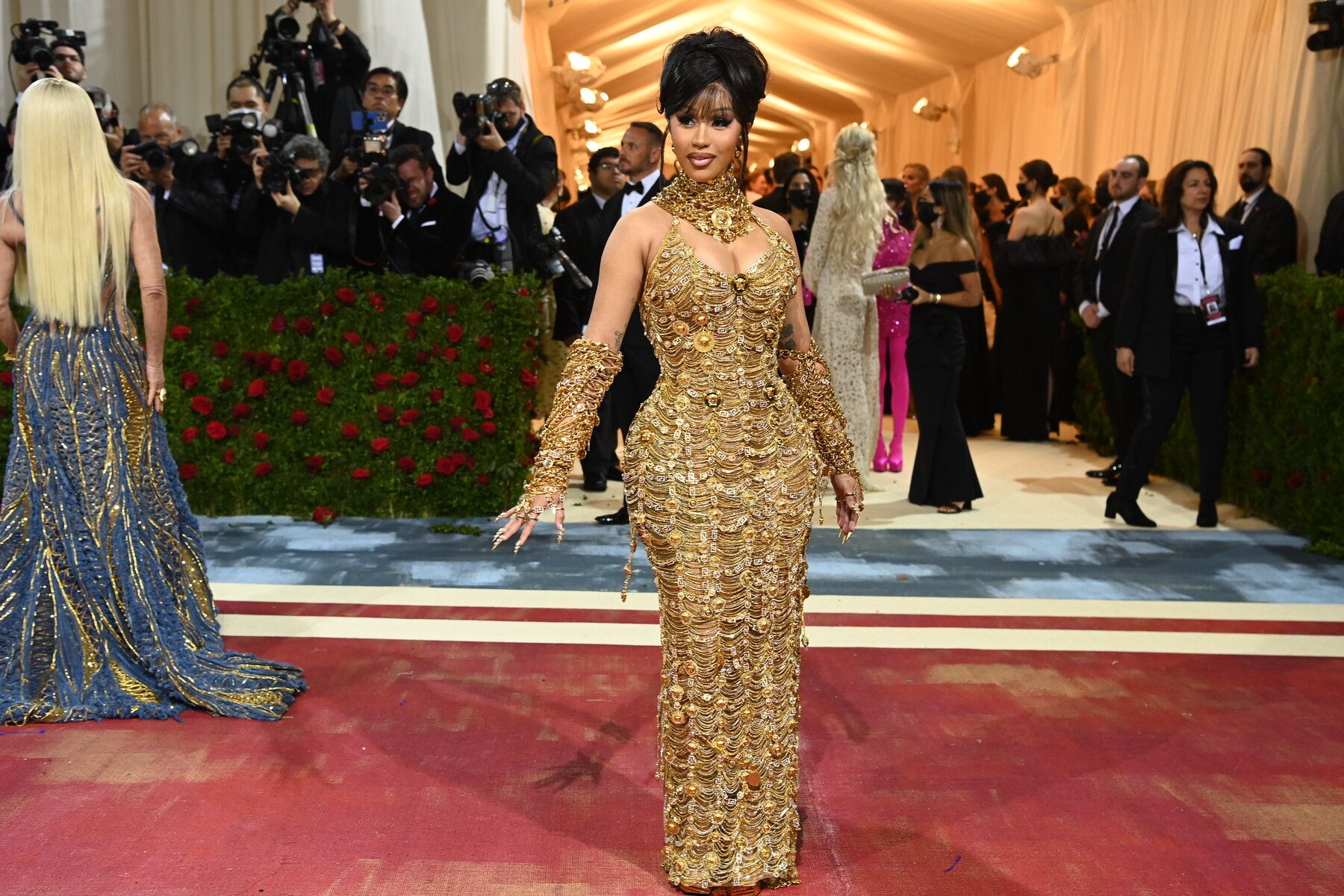 Firstly, a note on this year’s theme. If you’re wondering why there are so many bustles, corsets, and silhouette-enhancing contraptions at this year’s Met Gala it’s because guests were dressing according to “Gilded Glamour” – a nod to the “In America: An Anthology of Fashion” exhibition. Some focused on the late 19th century as their inspiration, while others chose more contemporary 20th century references. 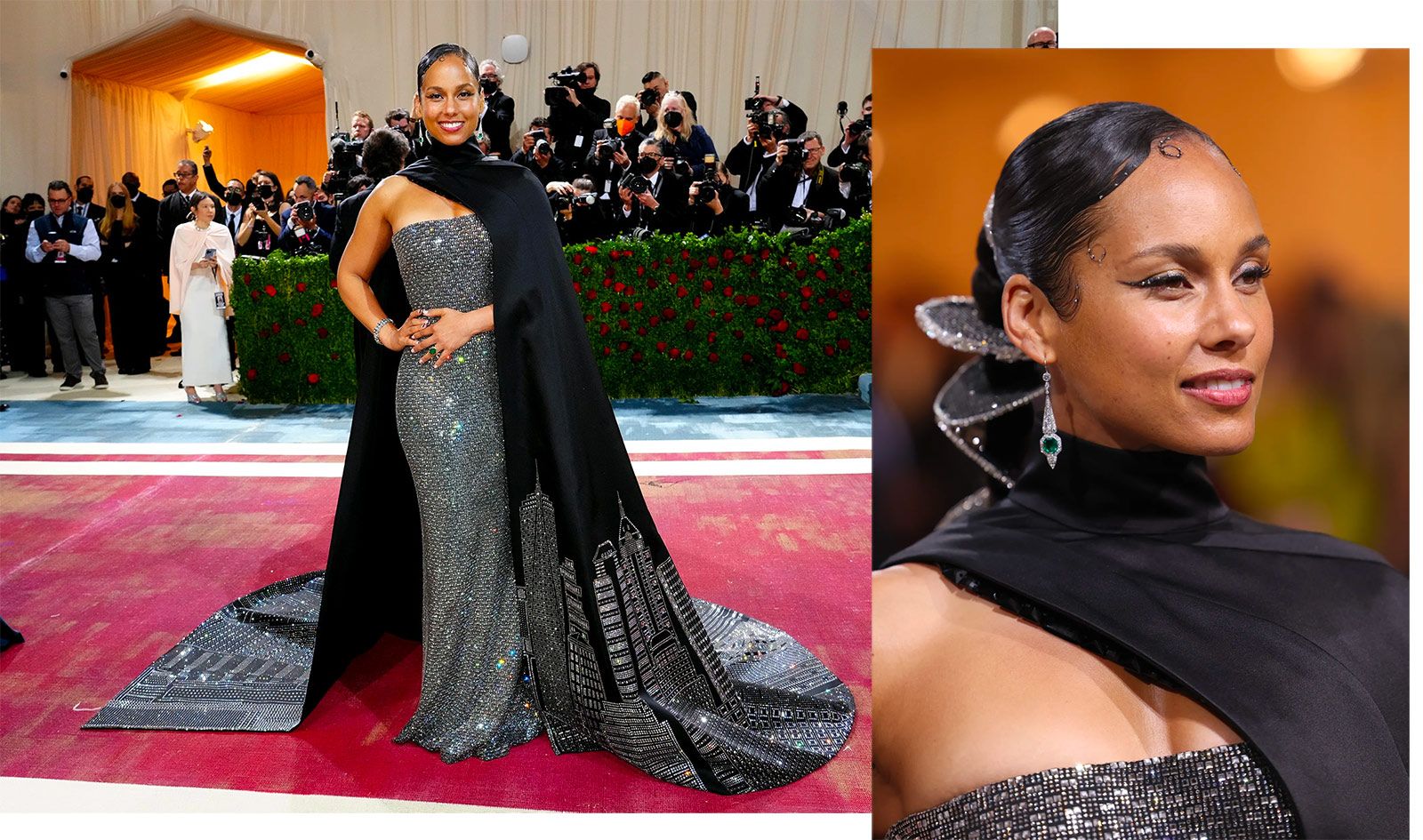 Let’s start with Blake Lively who once again caused a sensation with her Statue of Liberty-inspired gown that started in a rosy copper hue and transformed into a pale shade of blue. This colour change pays homage to Lady Liberty herself, who is crafted in copper and has patinated over time into the blue-grey that we see today. She wore jewels by Lorraine Schwartz, including a pair of earrings with around 90 carats of ‘nude’ champagne-hued diamonds and Colombian emeralds, plus a copper tiara. 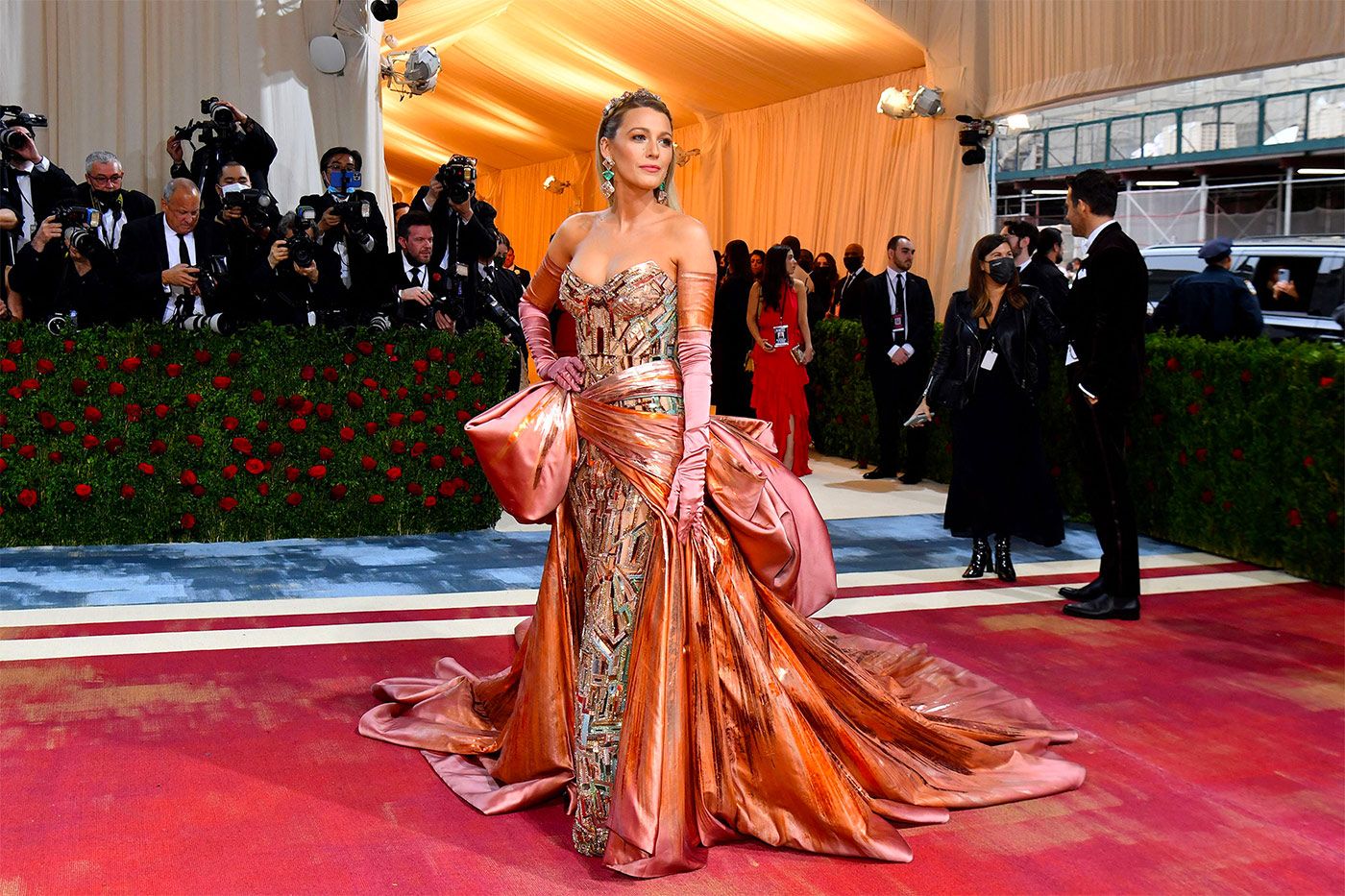 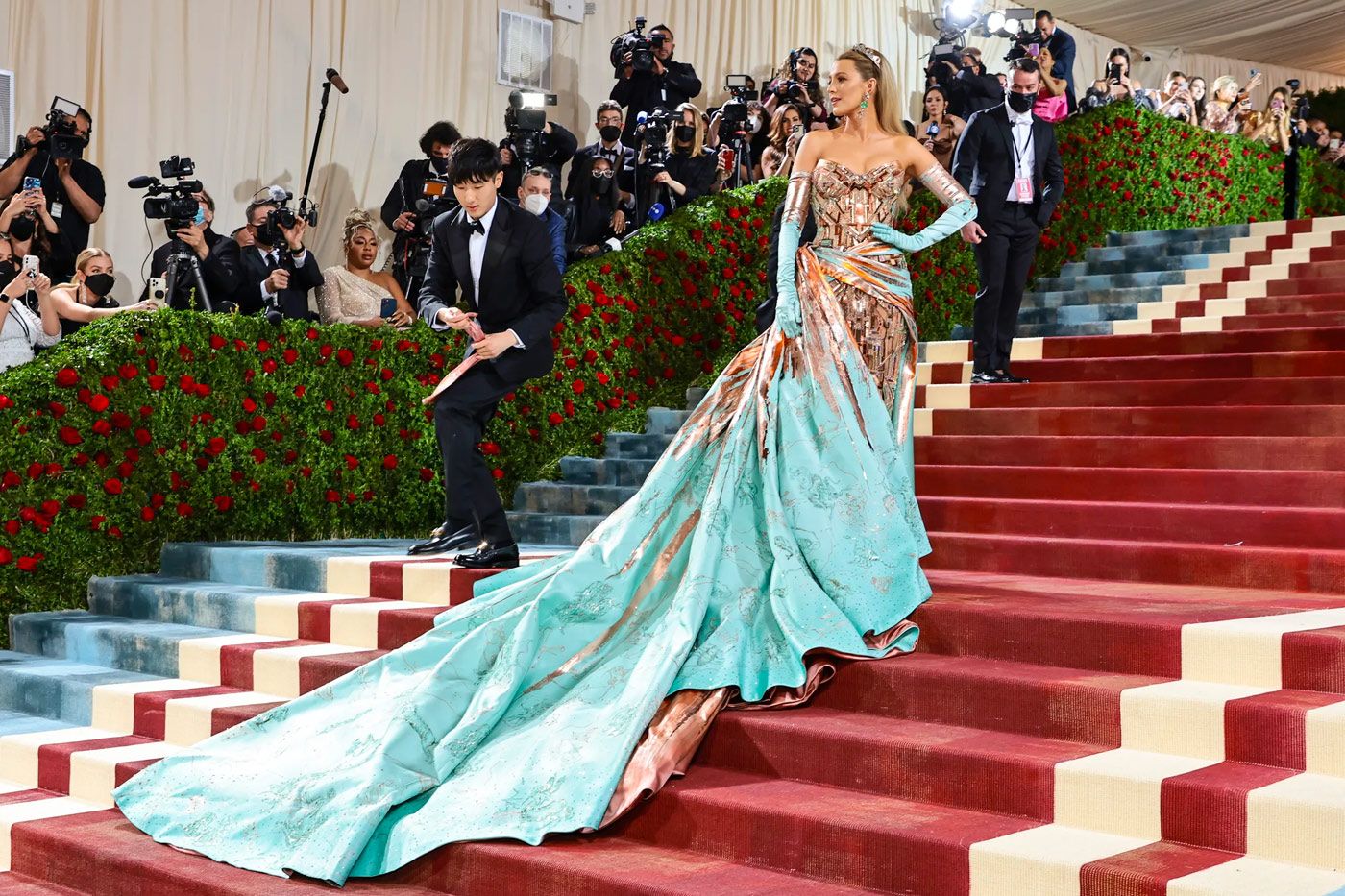 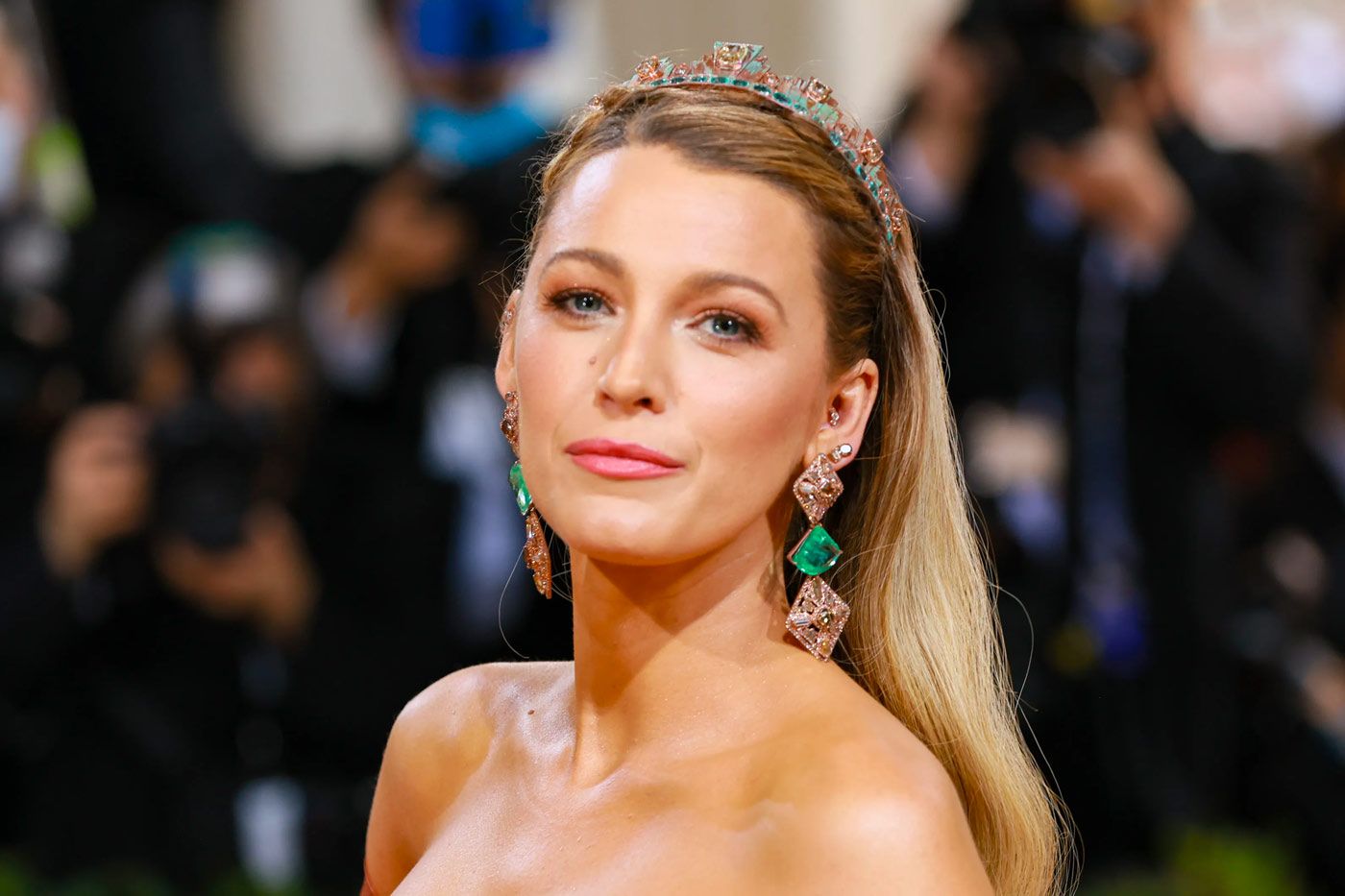 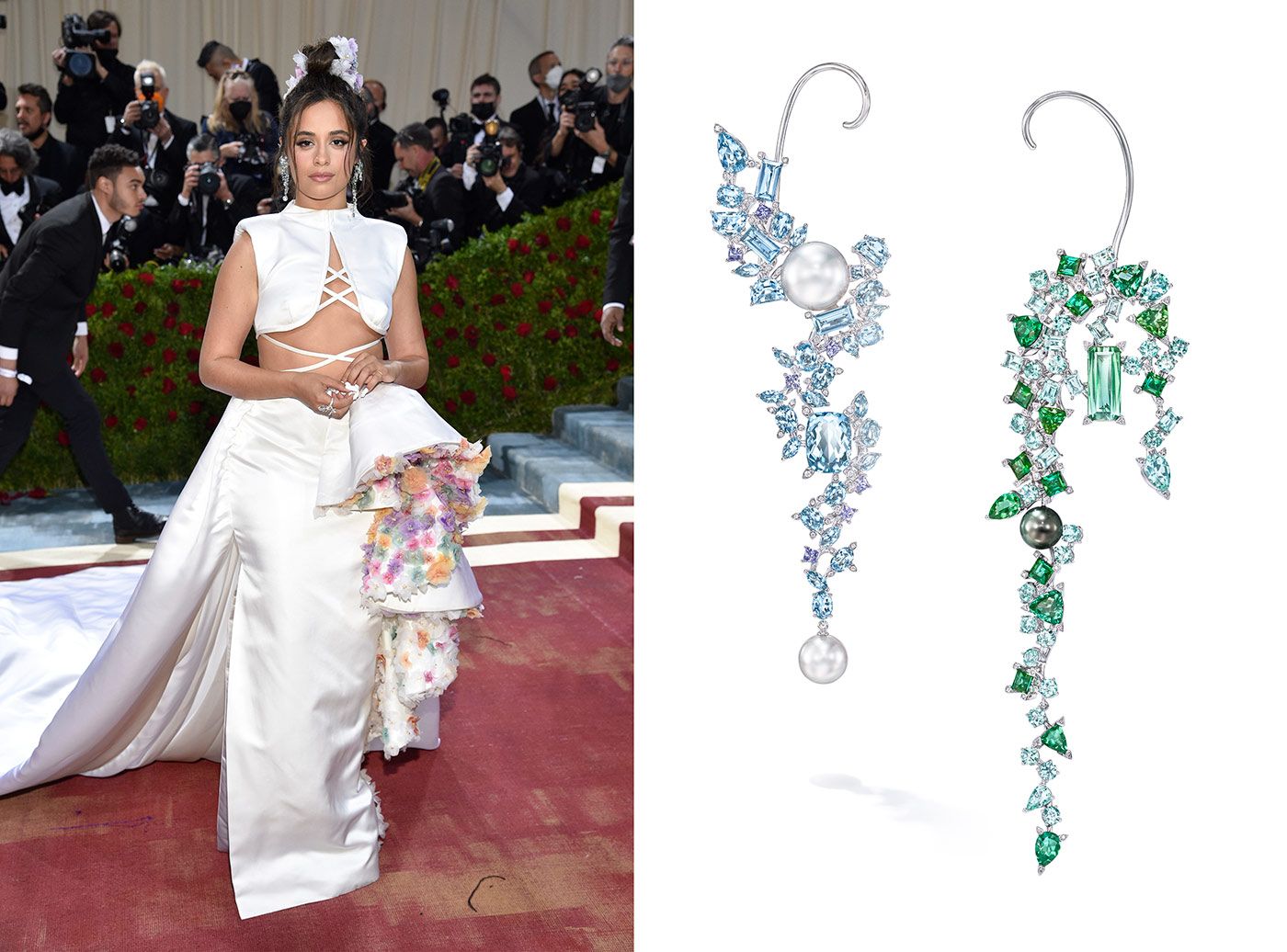 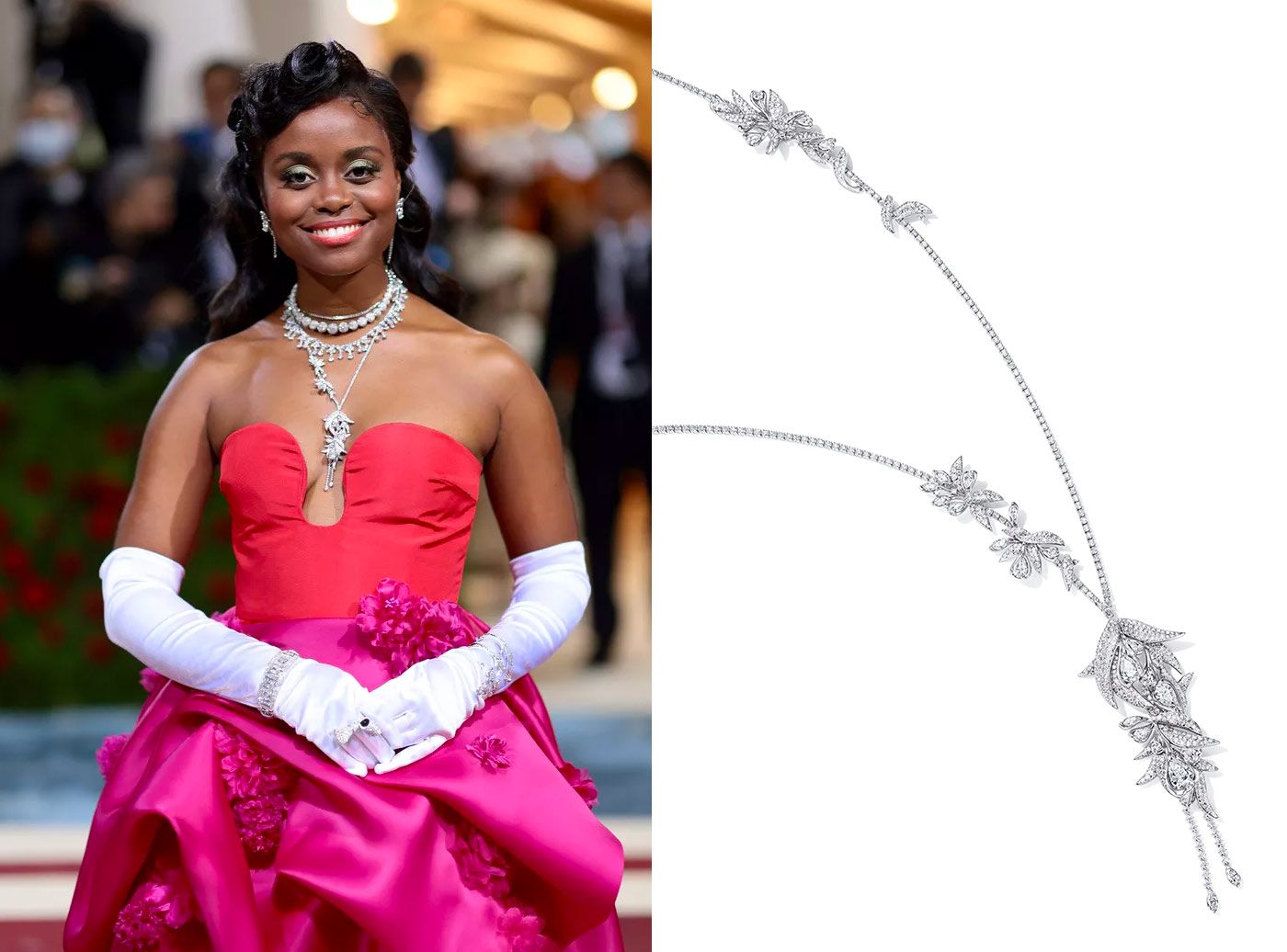 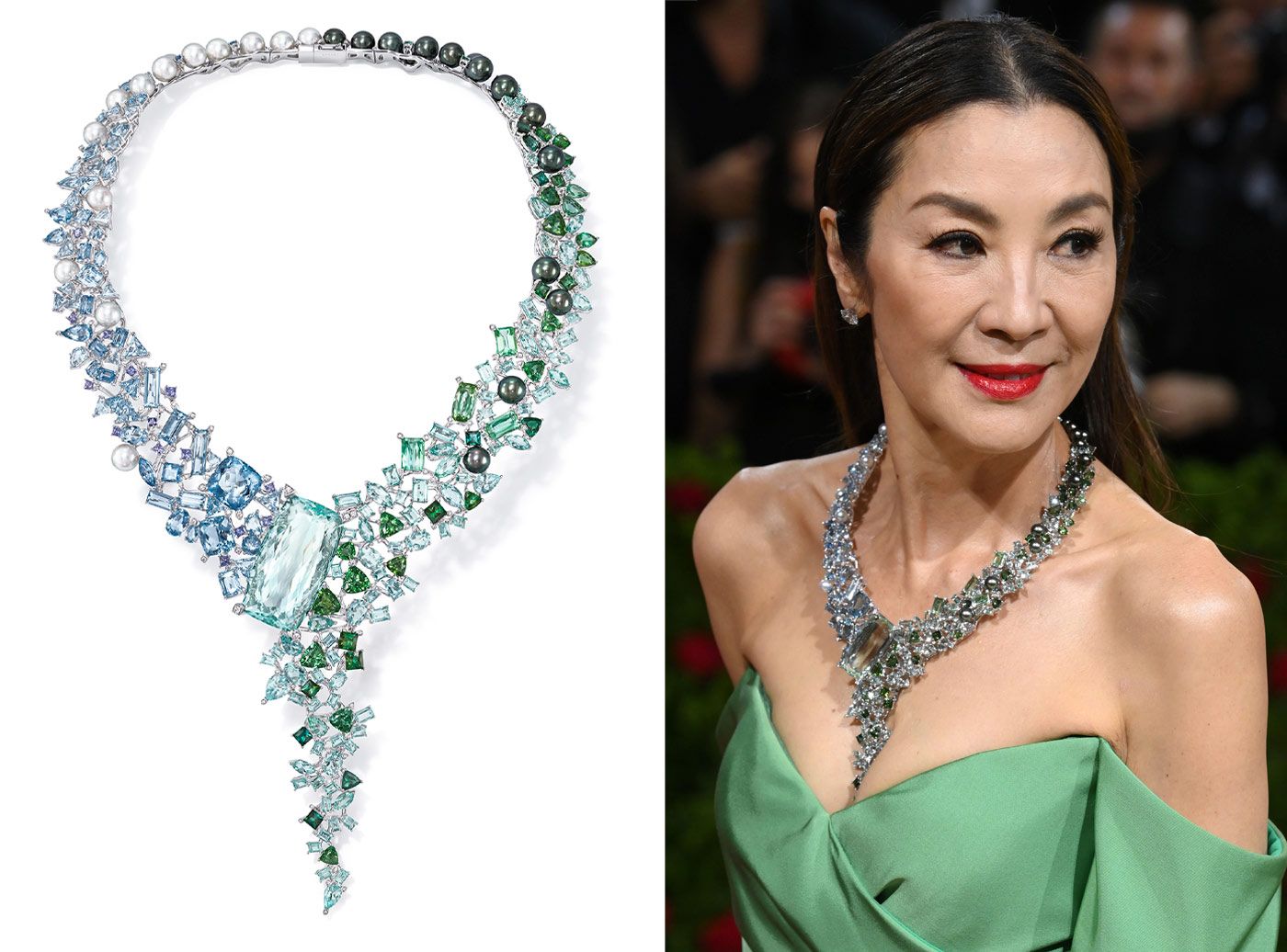 Speaking of white diamonds – there were plenty of them at this year’s Met Gala, as well as plenty of white gowns dialled up to eleven with lace, silk, feathers, opera gloves and face veils. The sleek elegance of an all-white get-up was presented by Stormzy, Emma Stone, Miranda Kerr, Eiza González, Sydney Sweeney, Lucy Boynton, Hailey Bieber and Dwayne Wade. The latter two sparkled in Tiffany & Co. diamonds, while model Lily Aldridge opted for Bulgari, singer Maggie Rogers chose Chanel and Oscar winner Jessica Chastain picked Gucci, including a pair of 18k white gold, pink spinel and diamond earrings, and a diamond-encrusted brooch atop her ruby red hair turban. One of the red-carpet interviewers, actress Vanessa Hudgens, also chose white diamonds in the form of lavish Messika earrings. De Beers Jewellery enjoyed a moment in the spotlight too on singer-of-the-moment Olivia Rodrigo, who wore the Arpeggia earrings, an Arpeggia ring, a DB Classic necklace and the Portraits of Nature Monarch Butterfly white diamond ring, for a combined carat weight of nearly 20 carats. 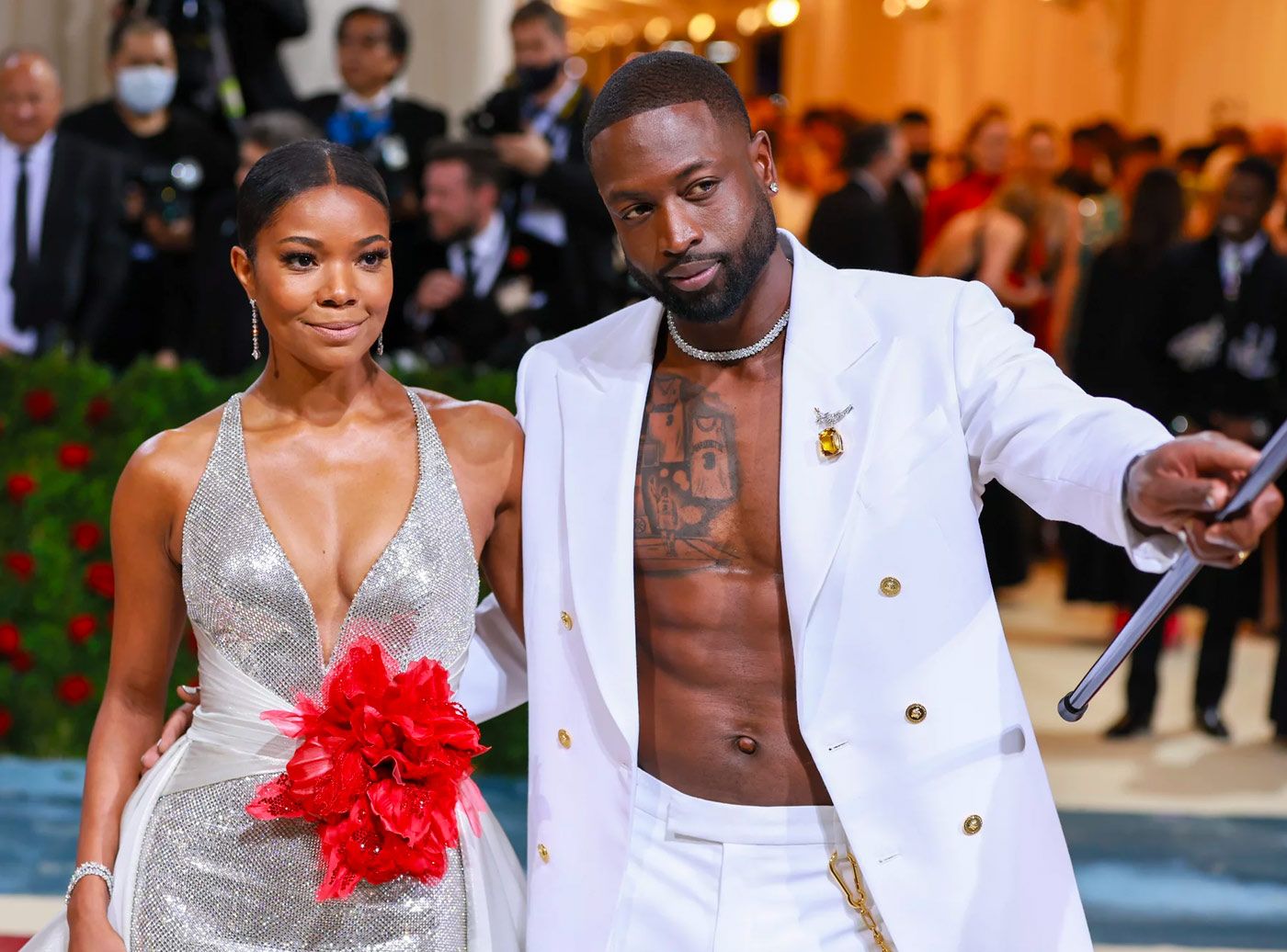 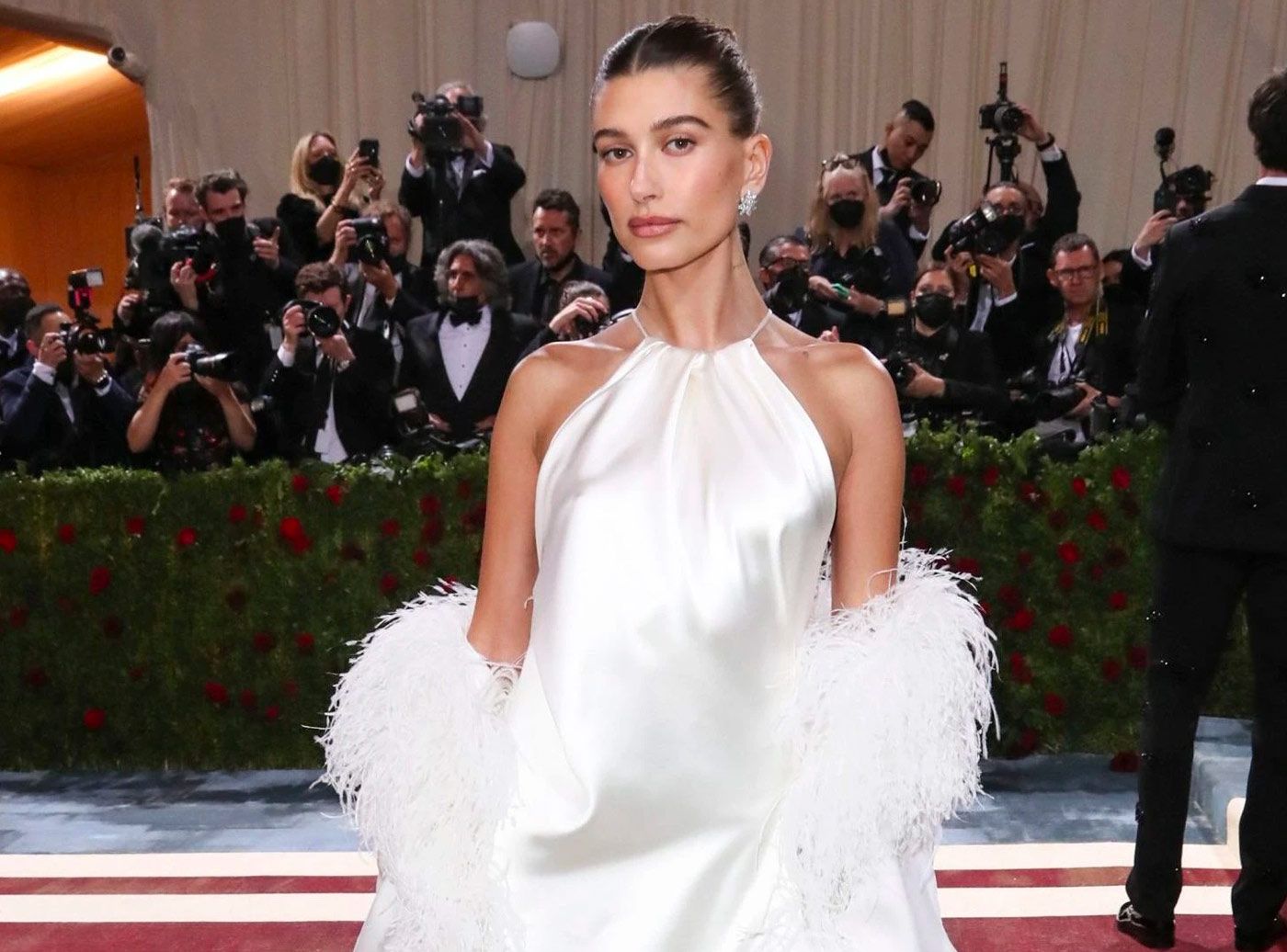 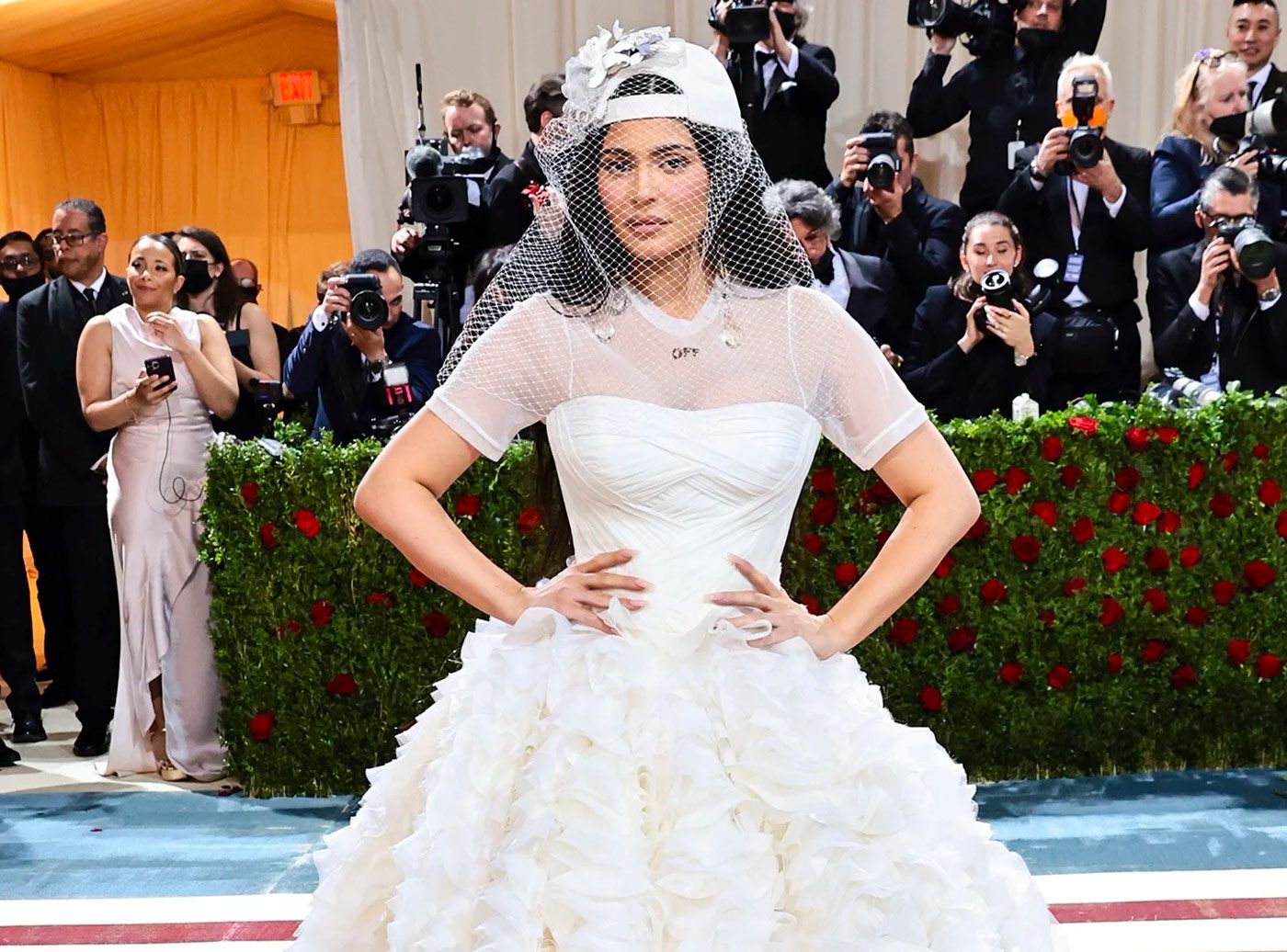 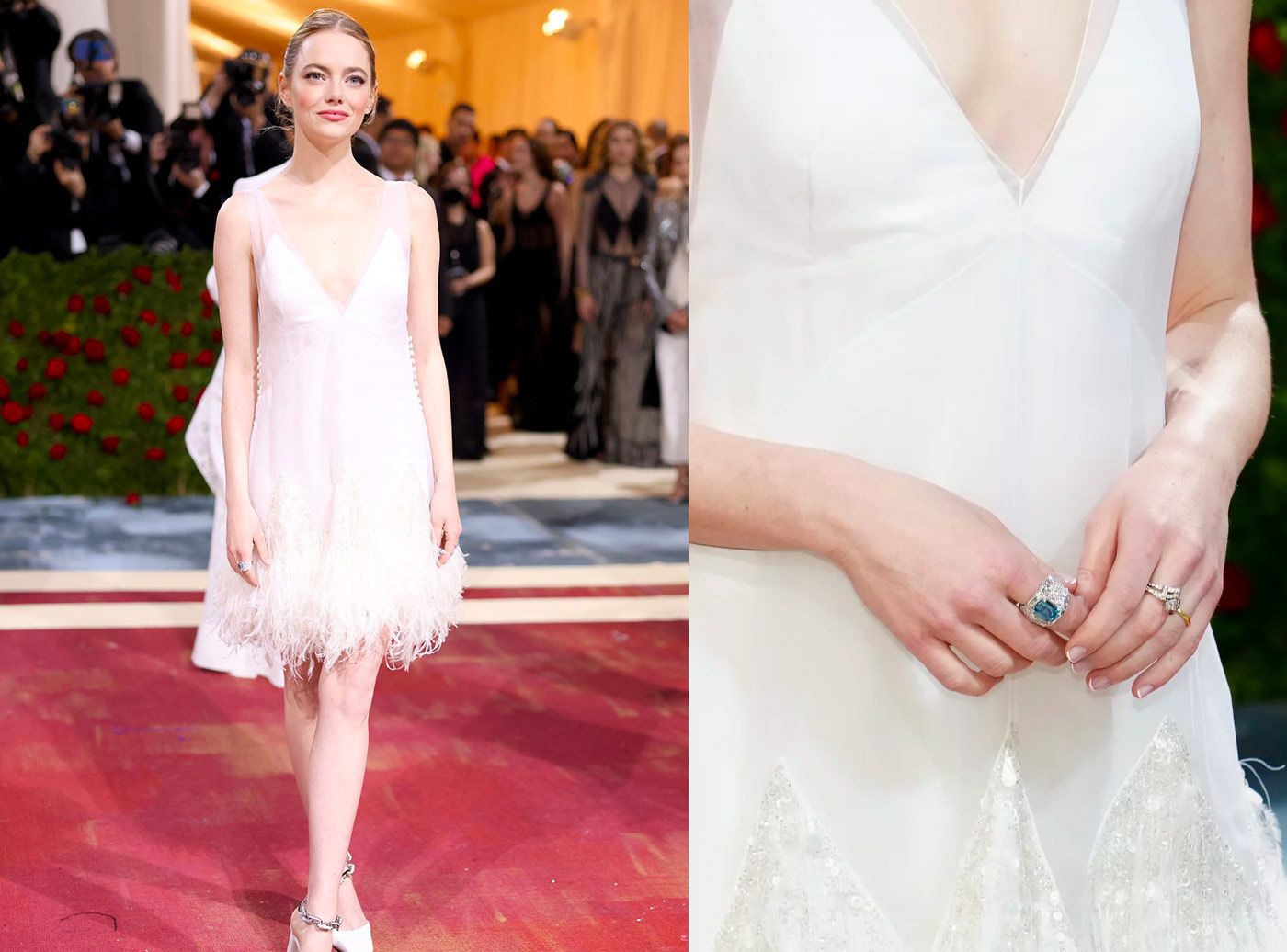 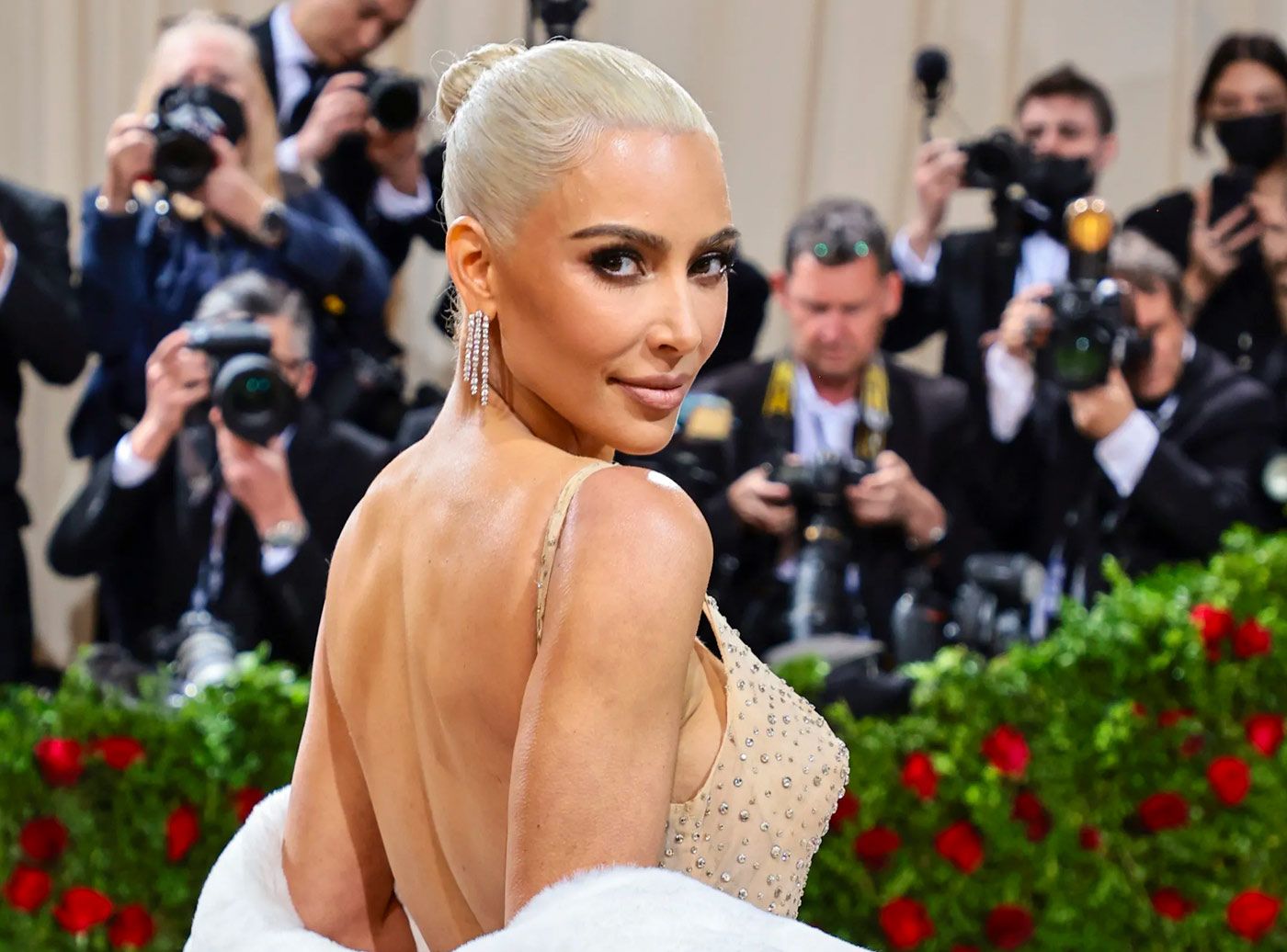 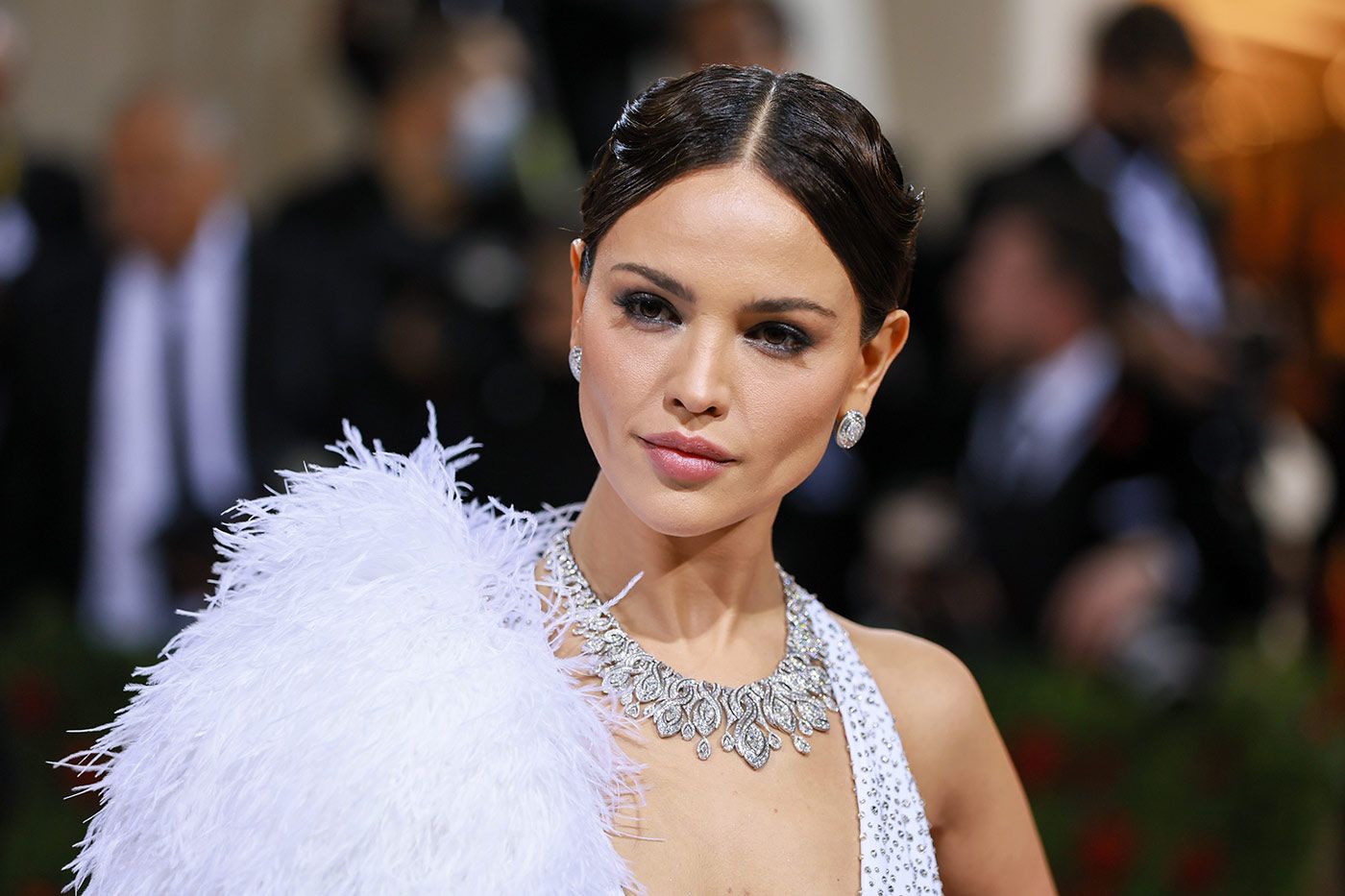 While it would be impossible to mention also those who wore diamonds (we’d be writing until next year’s Met Gala), we must shout out actress Claire Danes, who wore a white diamond lariat necklace and pear-shaped diamond ring by Gismondi 1754; actress Jodie Turner-Smith in Gucci High Jewellery, and actress Kerry Washington in a refined black dress with Jacob & Co. diamonds that signalled true ‘Old Hollywood Glamour’. 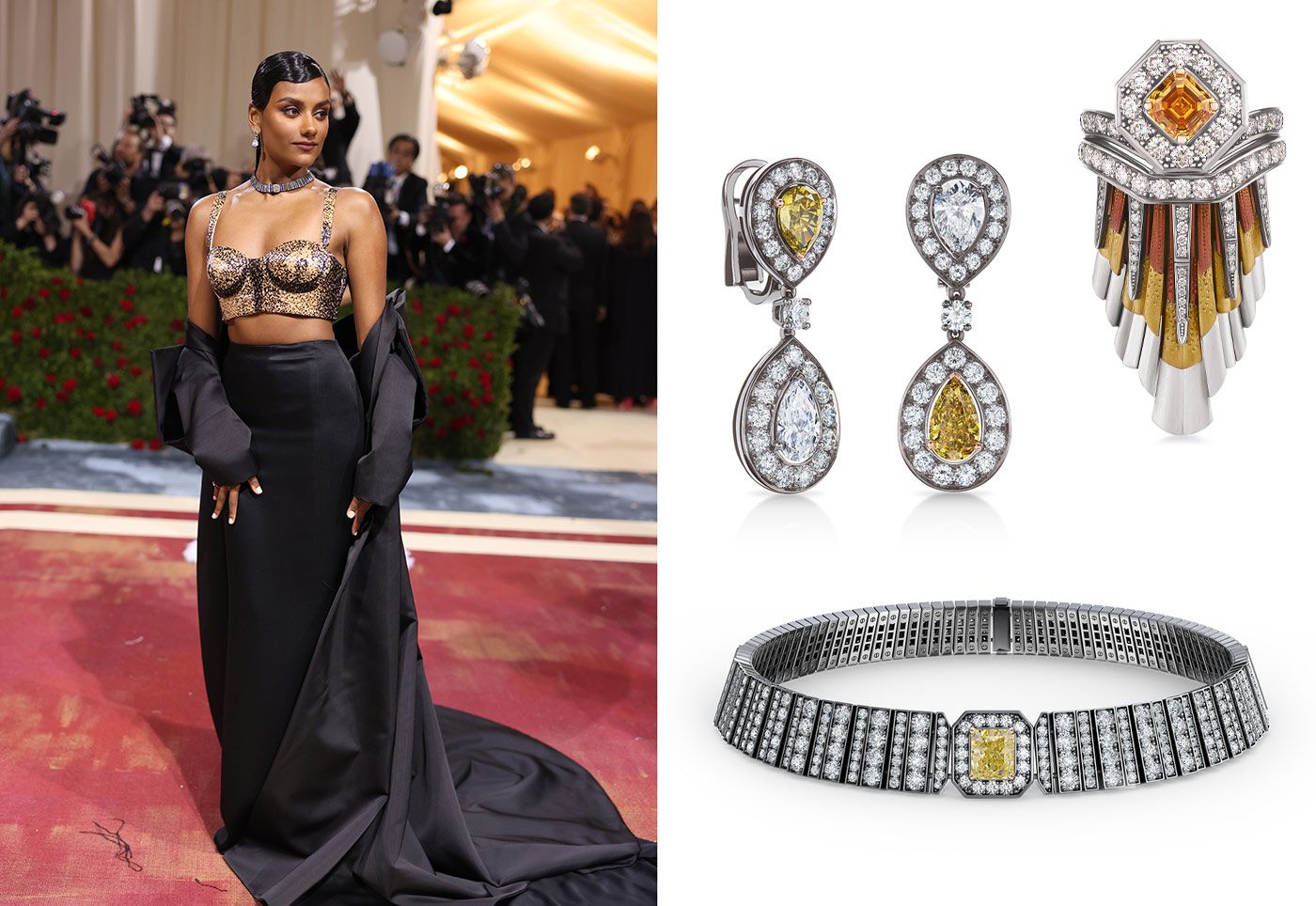 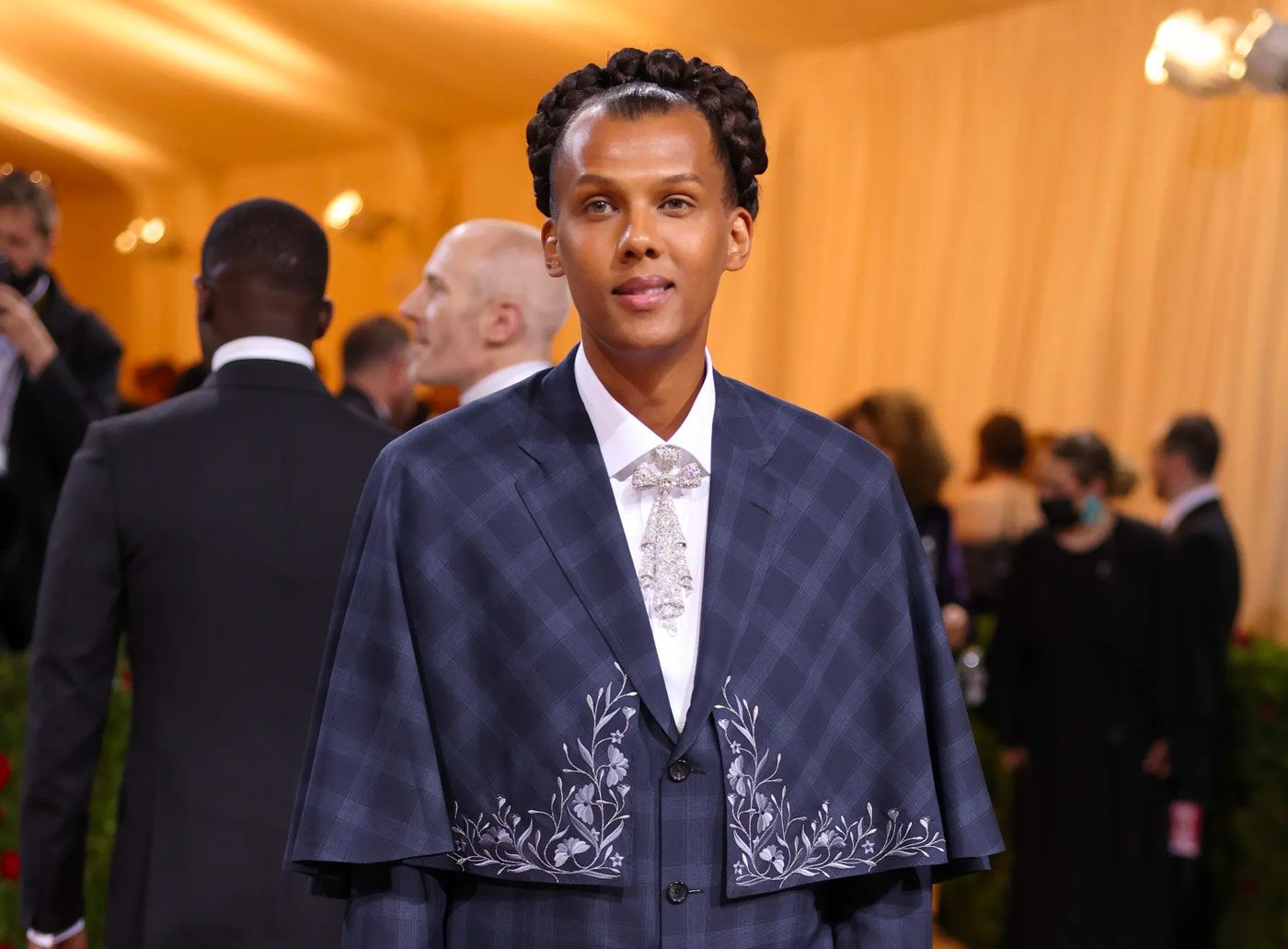 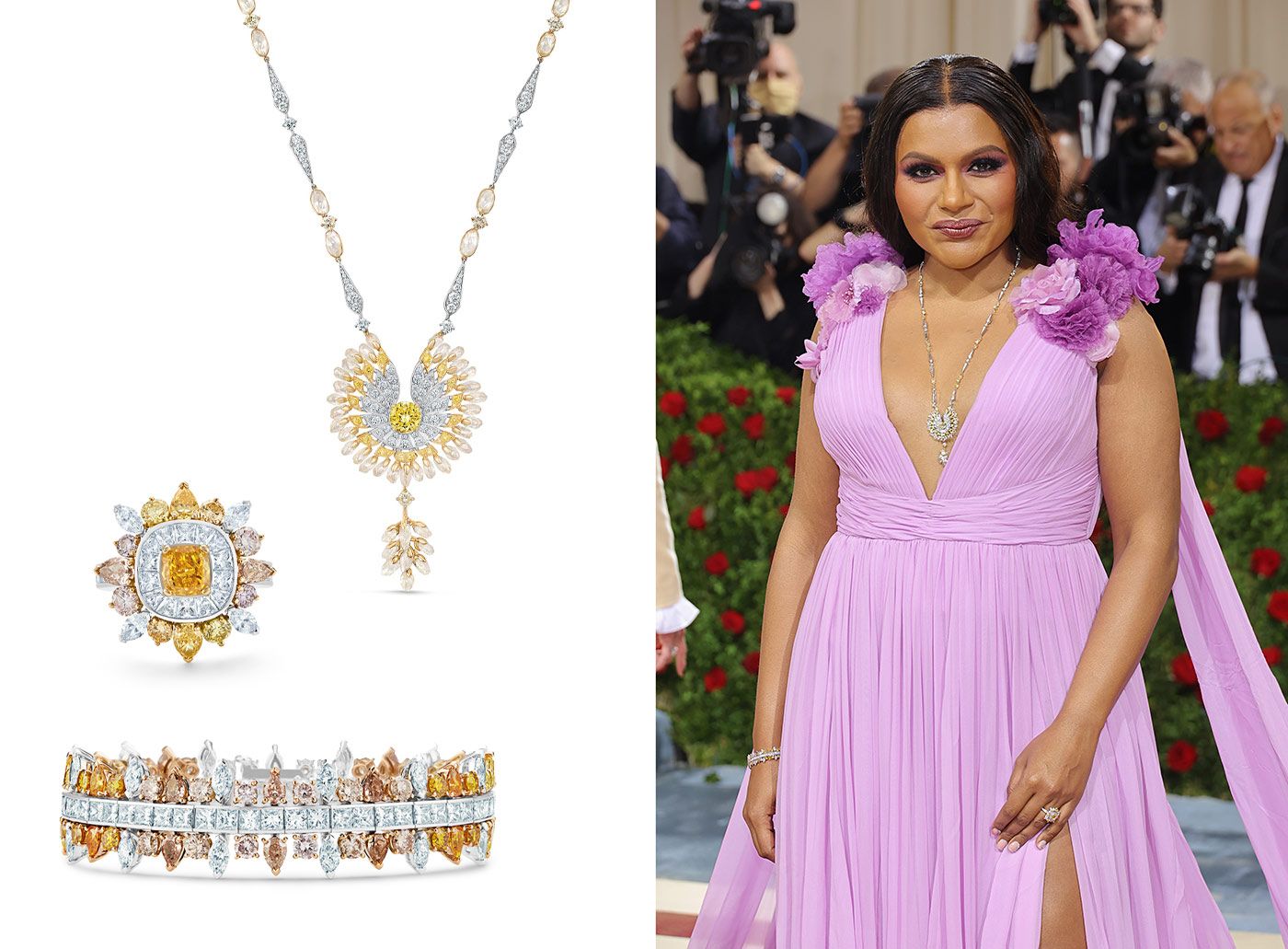 If white diamonds were the anchor of the evening, then a subtle splash of colour was the method for adding a bit of extra personality. Washes of yellow diamonds, sapphires and fire opals, worn by the like of Cynthia Ervio in Roberto Coin, were a popular choice, as were pops of green, like Venus Williams’ Bulgari High Jewellery necklace with over 34 carats of emeralds, and Alicia Key’s Tiffany & Co. diamond and emerald drop earrings. De Beers was able to thrive here thanks to the combinations of yellow, orange and champagne-hued diamonds in its Reflections of Nature High Jewellery collection, worn by Mindy Kaling, as well as the brownish-yellow diamonds in its The Alchemist of Light high jewels worn by Bridgerton actress Simone Ashley. Speaking of Bridgerton, a special mention must go to Nicola Coughlan who wore asymmetric earrings and ear cuffs by Swarovski! 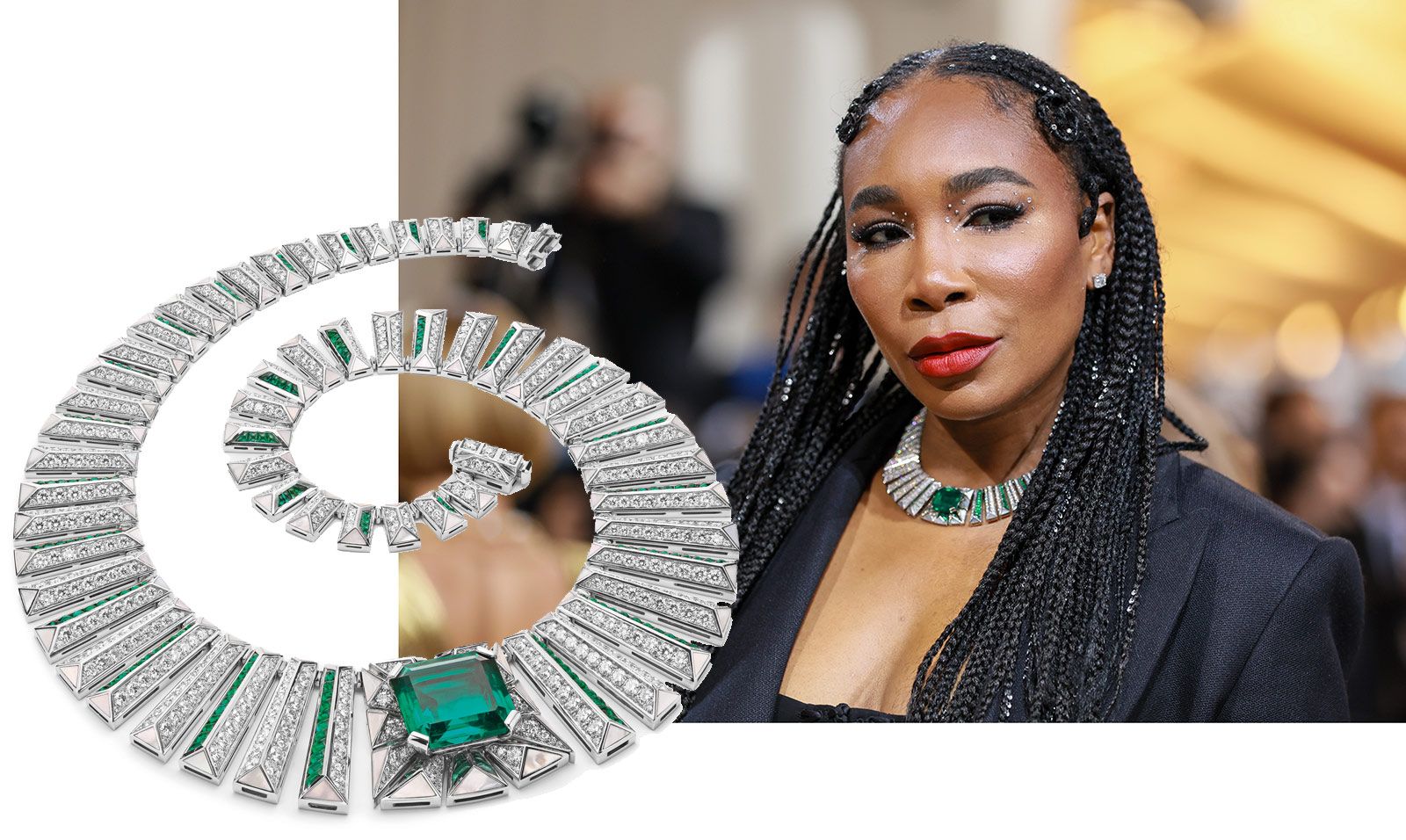 Men were just as much on board the jewellery train as women this year. I must shout out actor Paapa Essiedu who wore a suite of yellow gold and emerald jewels by VEERT combined with a deep blue velvet suit. The jewel tones continued with Gigi Hadid who wore a grey pearl necklace by Chopard with what appeared to be either rubies or spinels. Actress Madelaine Petsch also opted for warm yellow gold and emerald jewels by Reza, while lawyer Vanessa Nadal, the wife of Lin Manuel-Miranda, wore a Bulgari High Jewellery necklace with six round rubellites and six round amethysts. And let’s not forget TV star La La Anthony who wore a pair of David Yurman earrings with 30 carats of candy-coloured tourmalines. In fact, these deep velvety hues were all over the red carpet, worn by the likes of Dakota Johnson, Cara Delevingne, Adut Akech and Hillary Clinton. One final special mention… actress HoYeon Jung in Louis Vuitton and what looks like a suite of black opal and diamond jewels. 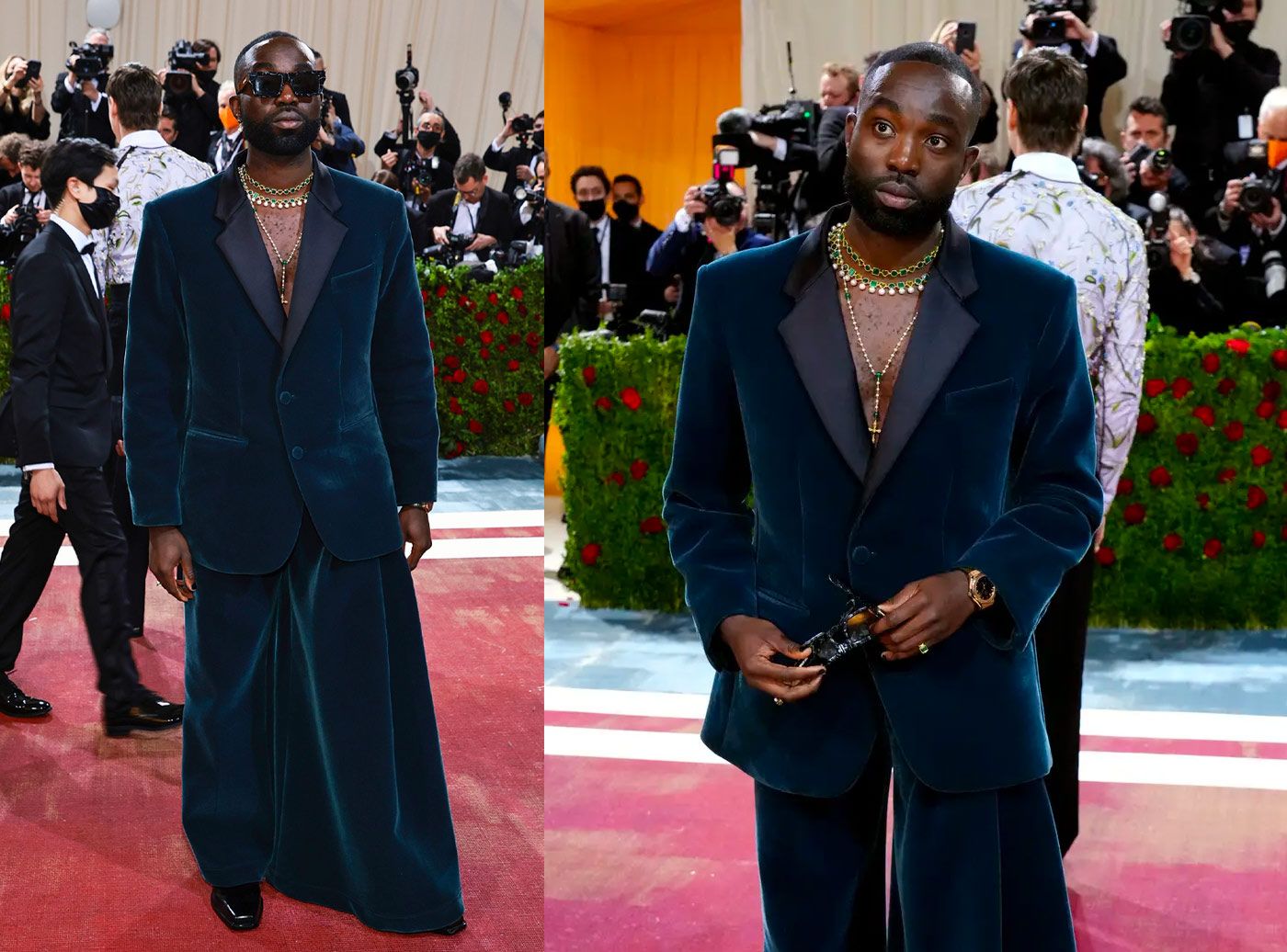 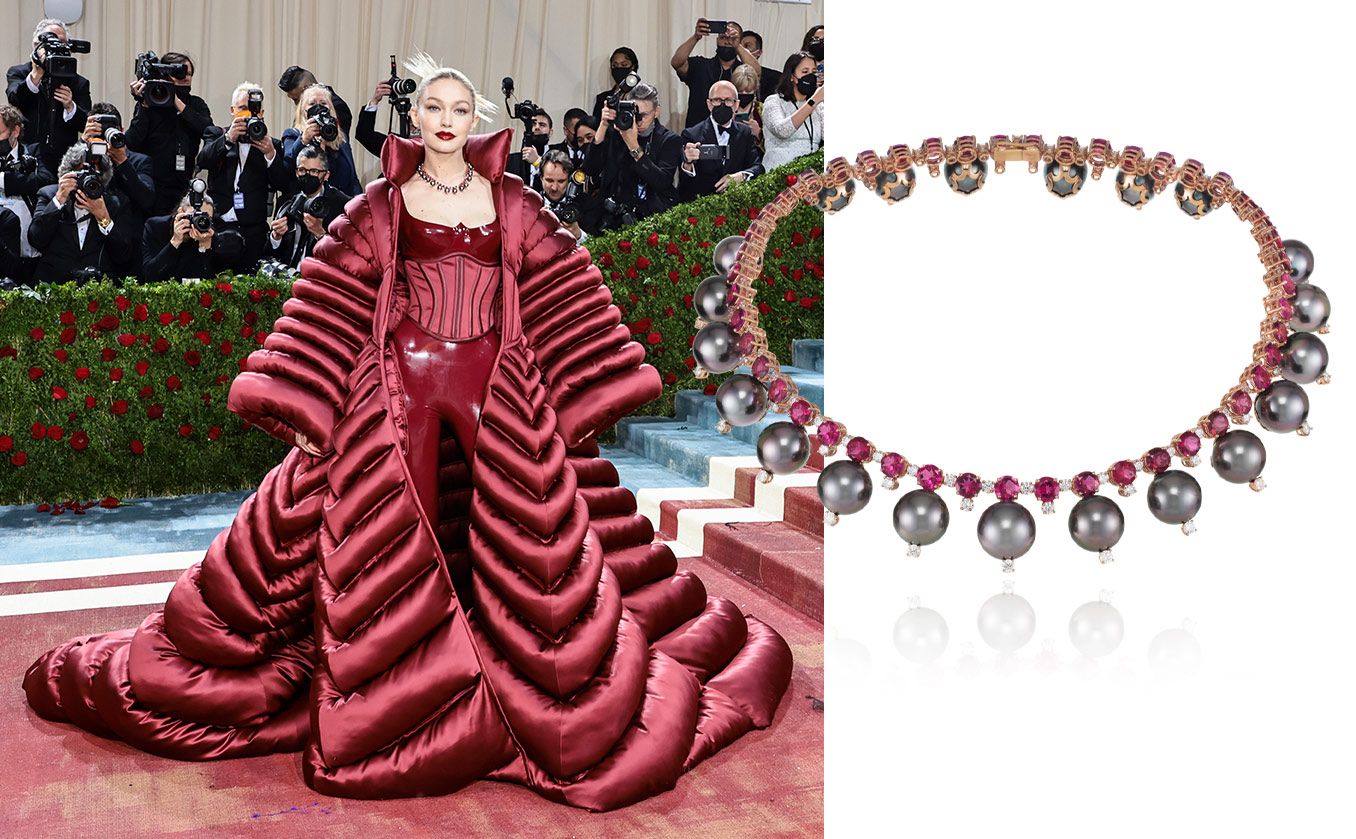 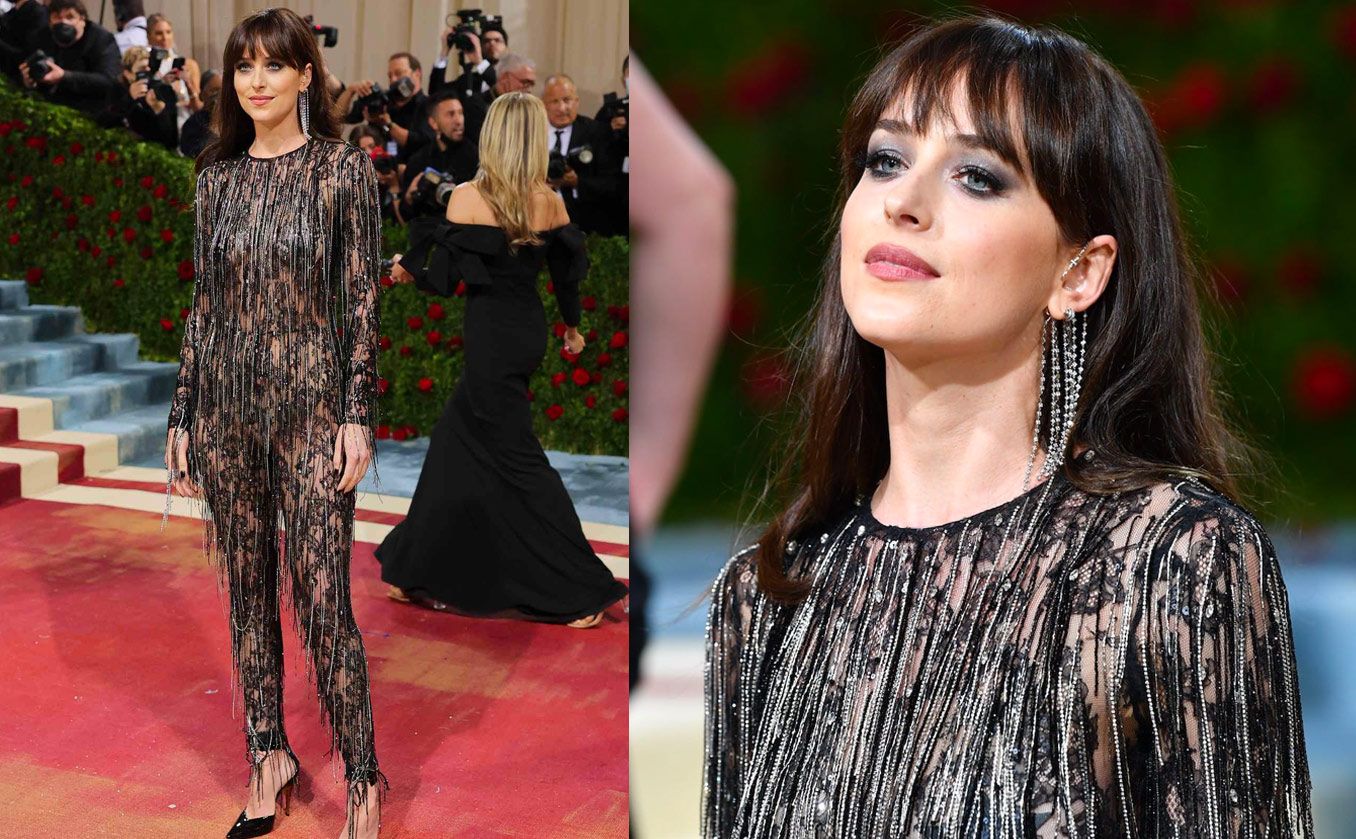 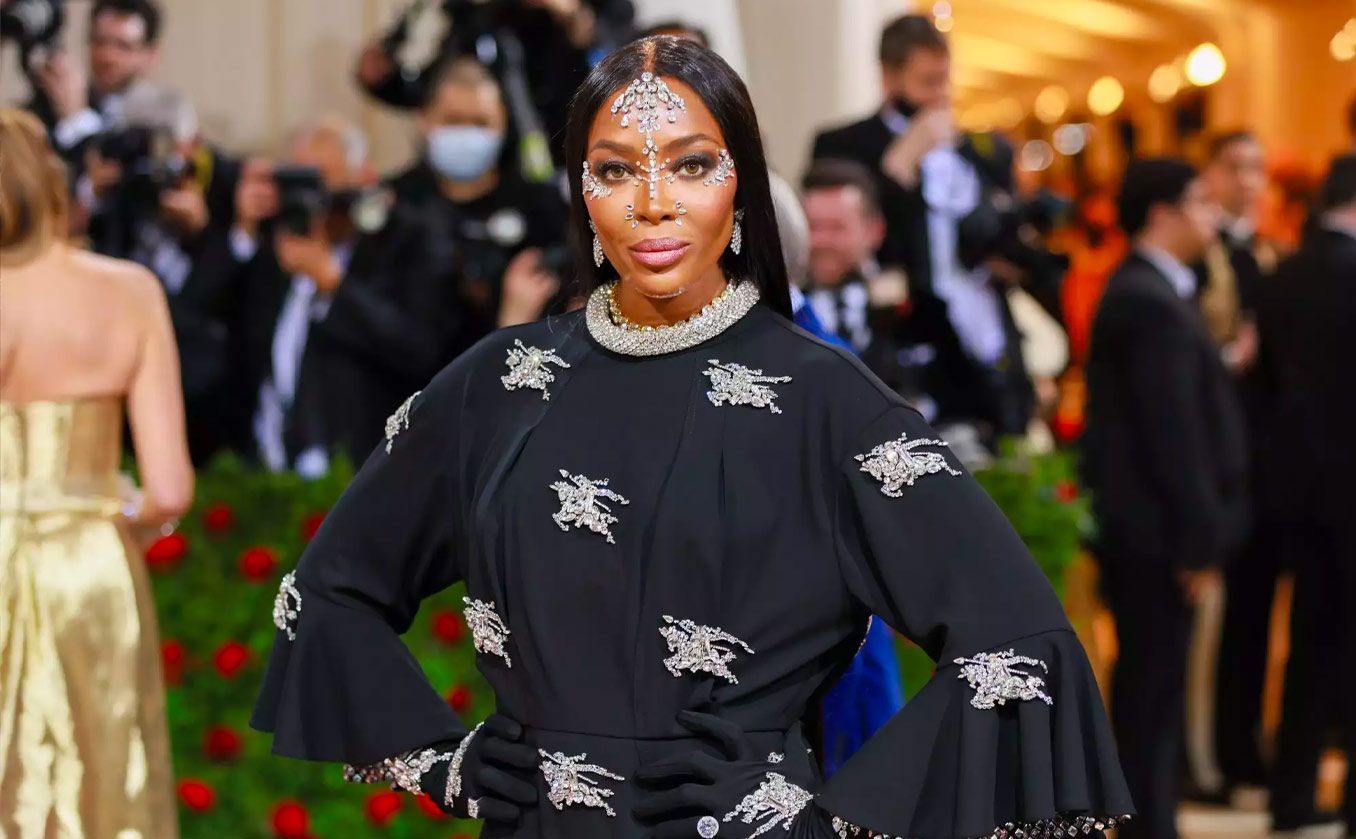 Another notable jewellery trend at the Met Gala 2022 was a mix-and-match approach to contemporary vintage and antique pieces, worn all at once and often by the same maison. For example, Billie Eilish and Danai Gurira both wore antique and vintage pieces by Fred Leighton, while Maude Apatow wore Cartier pieces that included a 1930s flower brooch pinned in her hair. Pearls also added to the vintage upcycling and recycling theme that infused this year’s red carpet, with actress Laura Harrier in David Yurman and model Paloma Elsesser in a Victorian-inspired layering of pearl chokers. 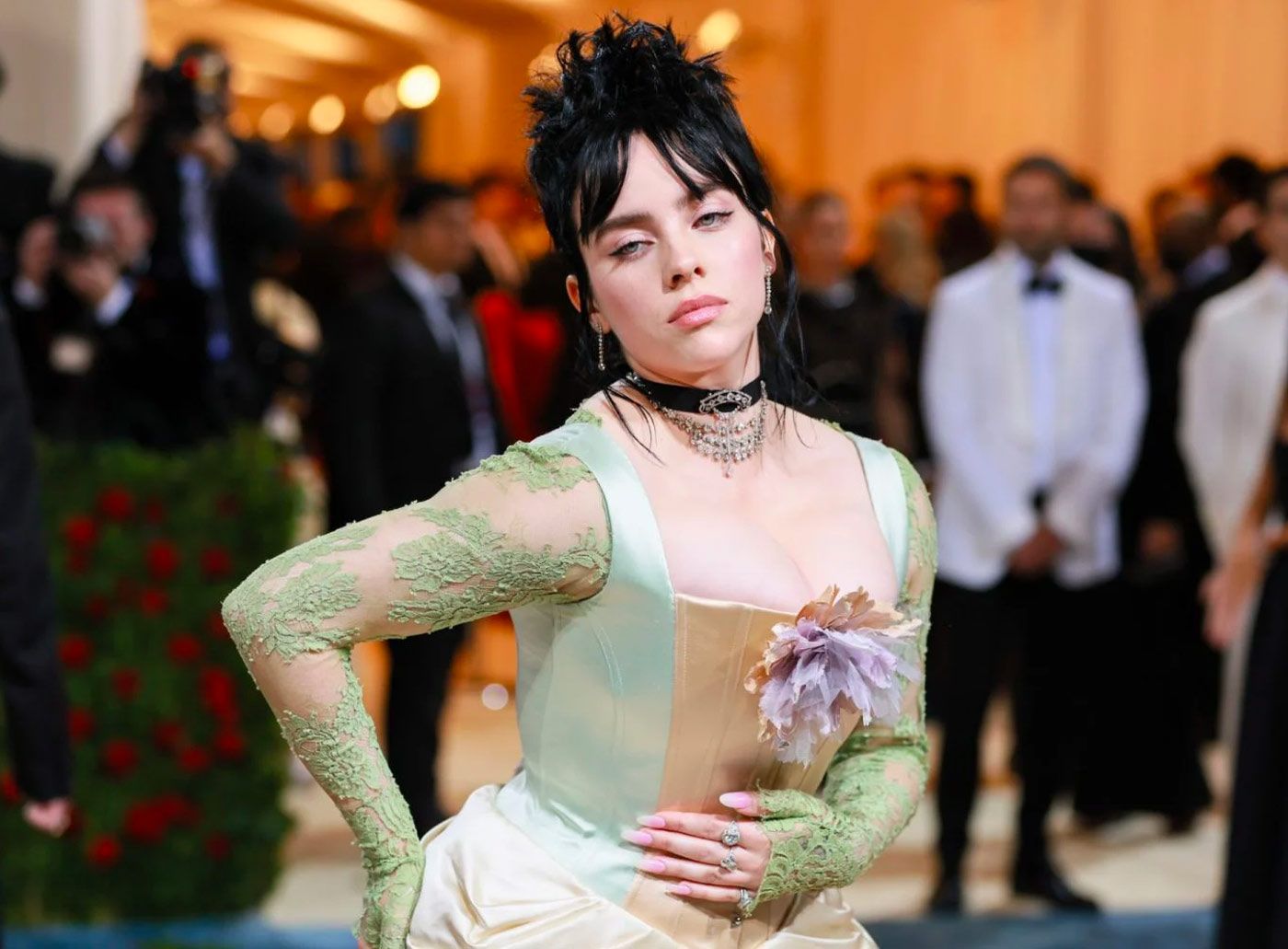 Of course, the winner of ‘best antique jewellery’ goes to Kate Moss, who wore a selection of pieces from A La Vieille Russie, including old mine-cut pear-shaped diamond transformable pendant earrings (circa 1860); a collect necklace with old-cut diamonds totalling 14 carats (circa 1850); a 16.61 carat yellow sapphire and diamond ring by Cartier (circa 1950), and a French-cut diamond bracelet by Tiffany & Co. from around 1910. 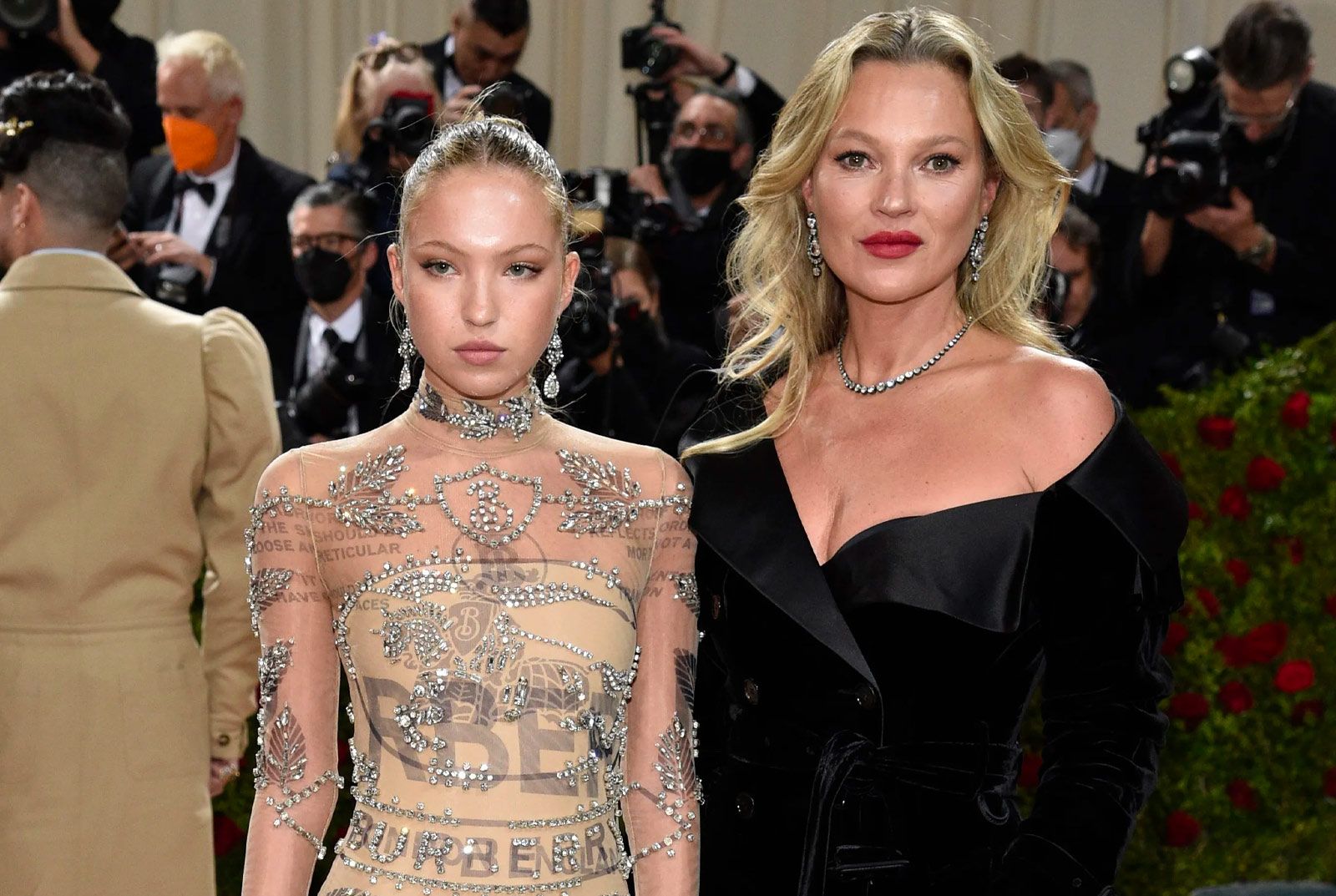 Return of the Tiara

Hamish Bowles, Global Editor at Large for Vogue, led the charge for tiaras at the Met Gala 2022 with the Verdura Feather Headdress that was last seen on Queen Elizabeth II in 1957. The yellow gold and platinum tiara, which was designed by Fulco di Verdura, is composed of 36 leaves, set with 1,223 diamonds weighing 28.32 carats. Internet personality Emma Chamberlain wore a vintage Cartier tiara made of platinum and diamonds (circa 1911), coupled with a Cartier High Jewellery necklace that announced her presence as one of the brand’s latest ambassadors flawlessly. Even Anna Wintour walked the red carpet in a tiara that appeared to be antique and set with peridot gemstones. 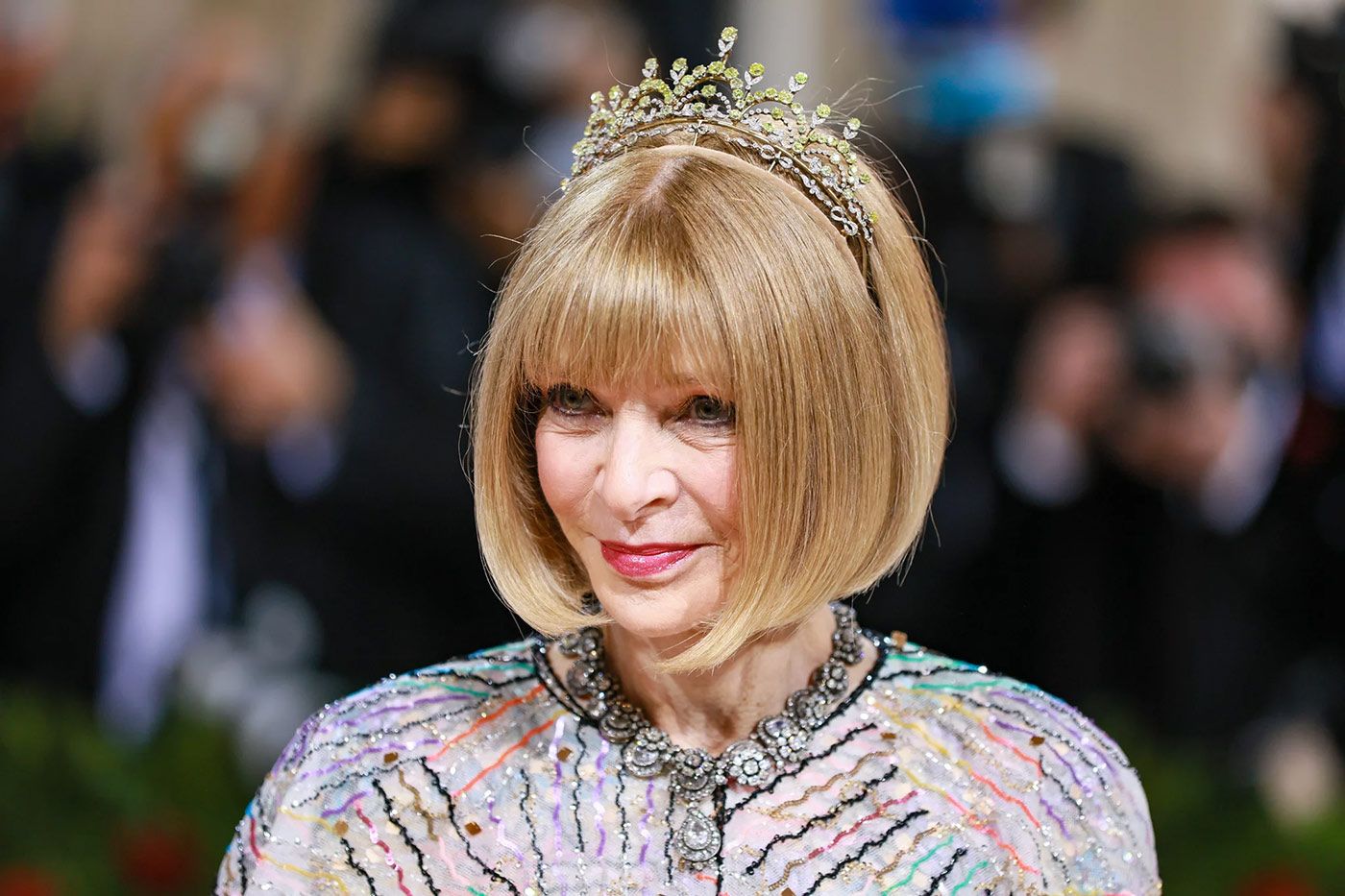 And it wasn’t just tiaras that stole the show – many celebs chose to wear diamond necklaces and brooches in their hair this year. Model Kaia Gerber wore diamond and pearl-set barrettes; Karlie Kloss styled her hair with a diamond ornament, coupled with pieces from the Muzo Nova collection in 18k gold; and fellow model Molly Sims wore her diamond necklace in her hair for the occasion. Others took the adornment to a whole new level, like Naomi Campbell with Jacob & Co. diamonds and crystal embellishments across her forehead, and Winnie Harlow with one of the night’s most extravagant headpieces (not forgetting the queen of hats, Sarah Jessica Parker, of course!). 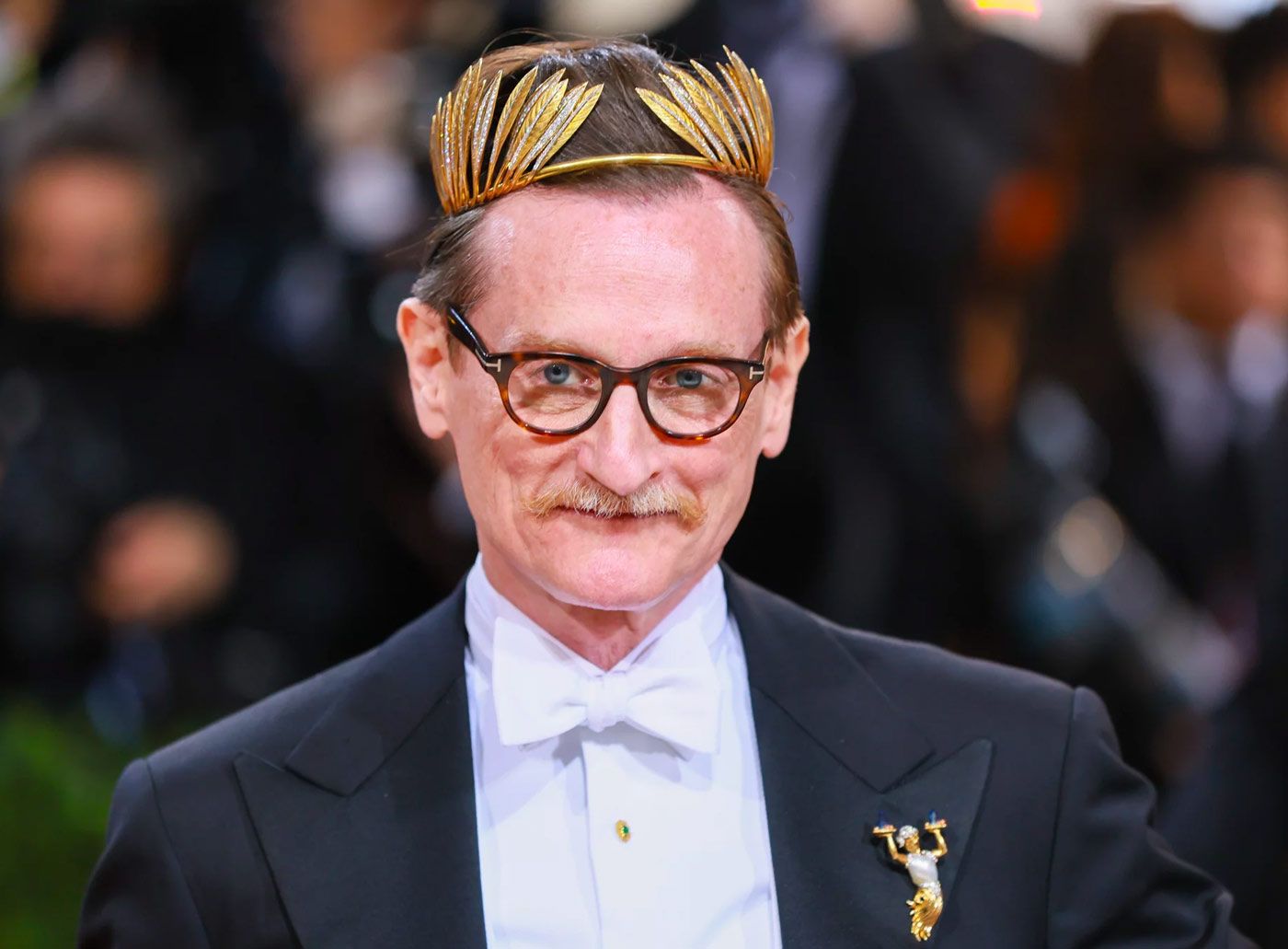 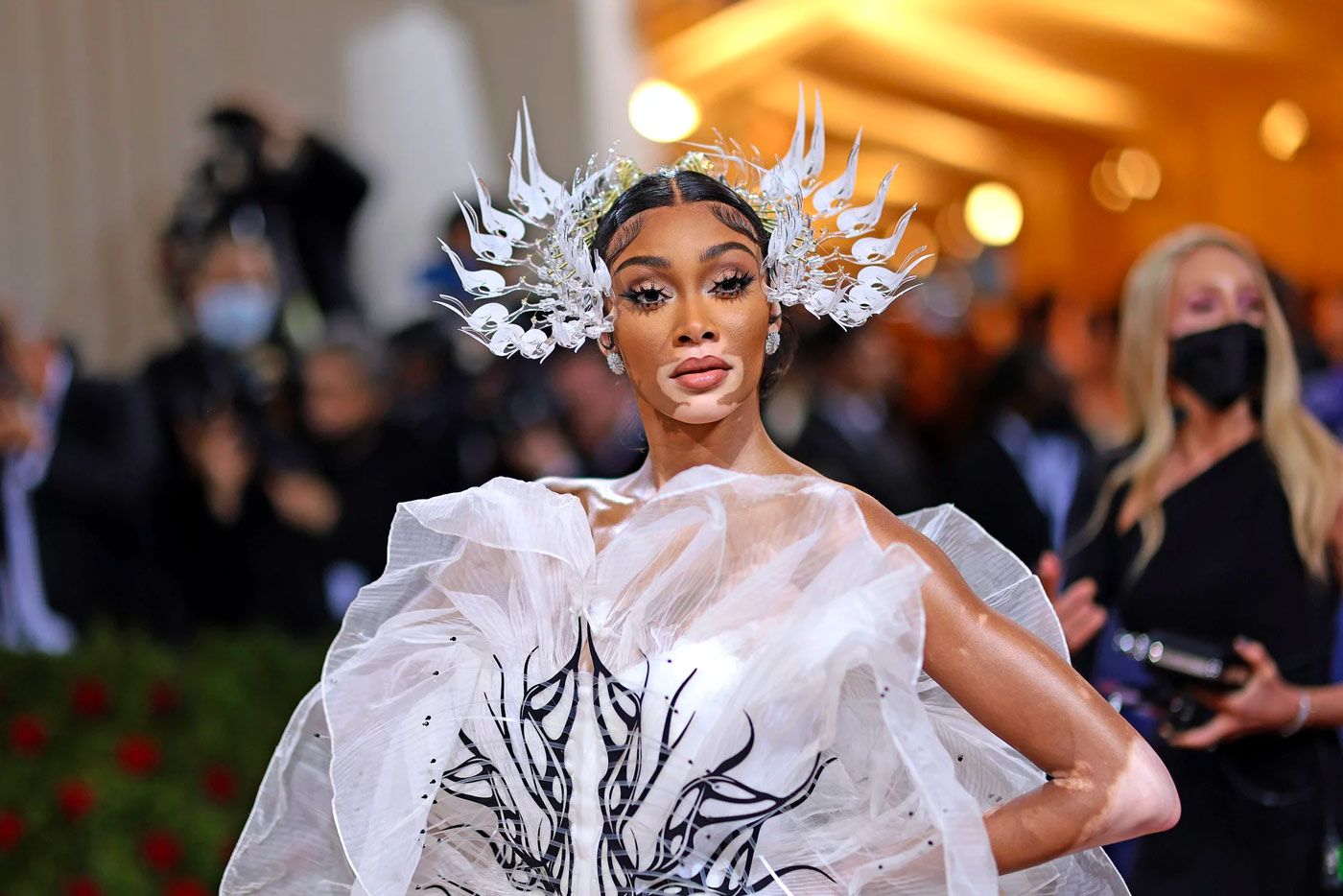 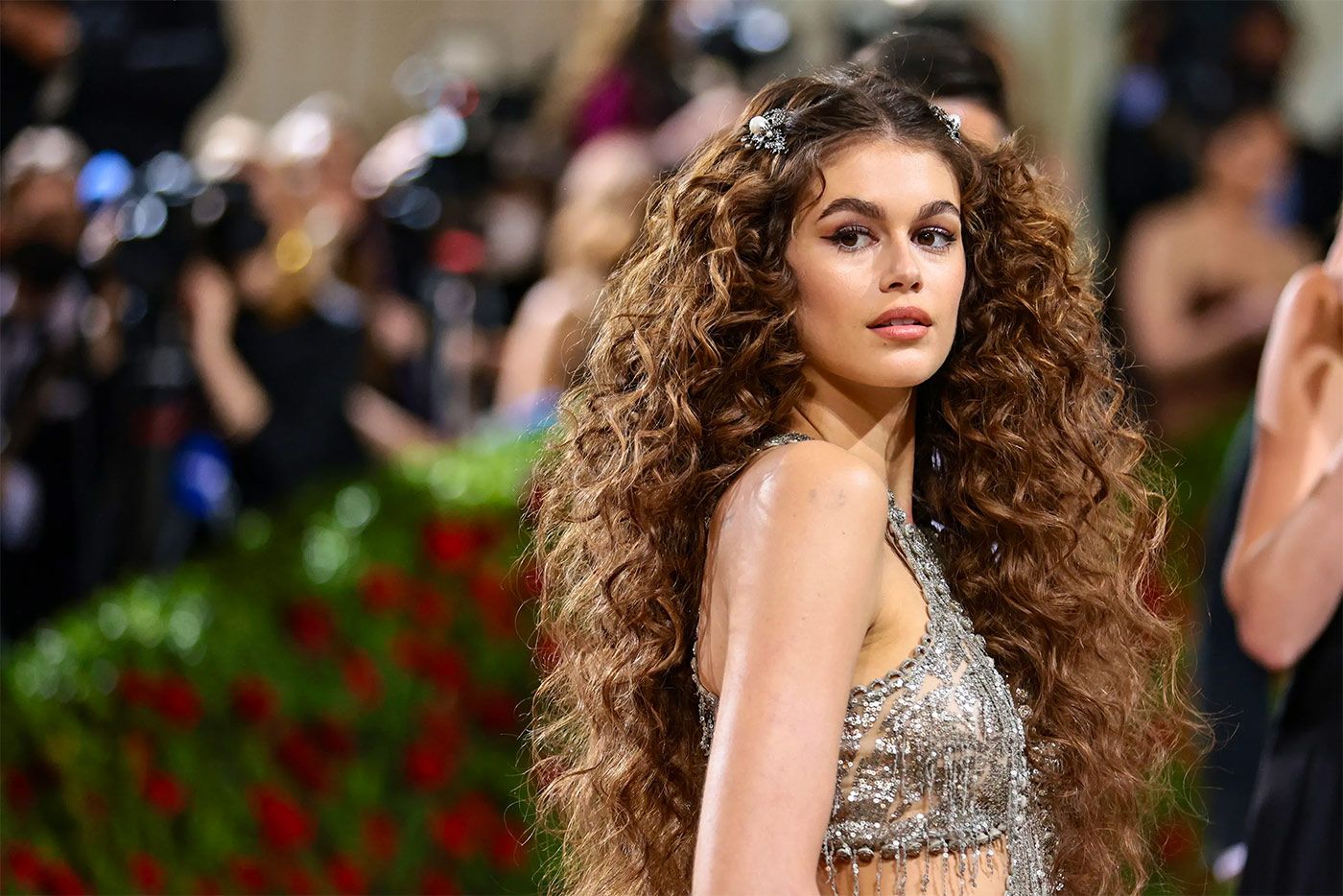 This was a night to remember for jewellery, not only because of the breadth of pieces on display, but also the audacity with which they were worn, enjoyed and styled. I could go on to describe each lapel pin, brooch, ring and diamond stud, but we would be here all day… I hope this taste of the night whets your appetite for more jewelled research.