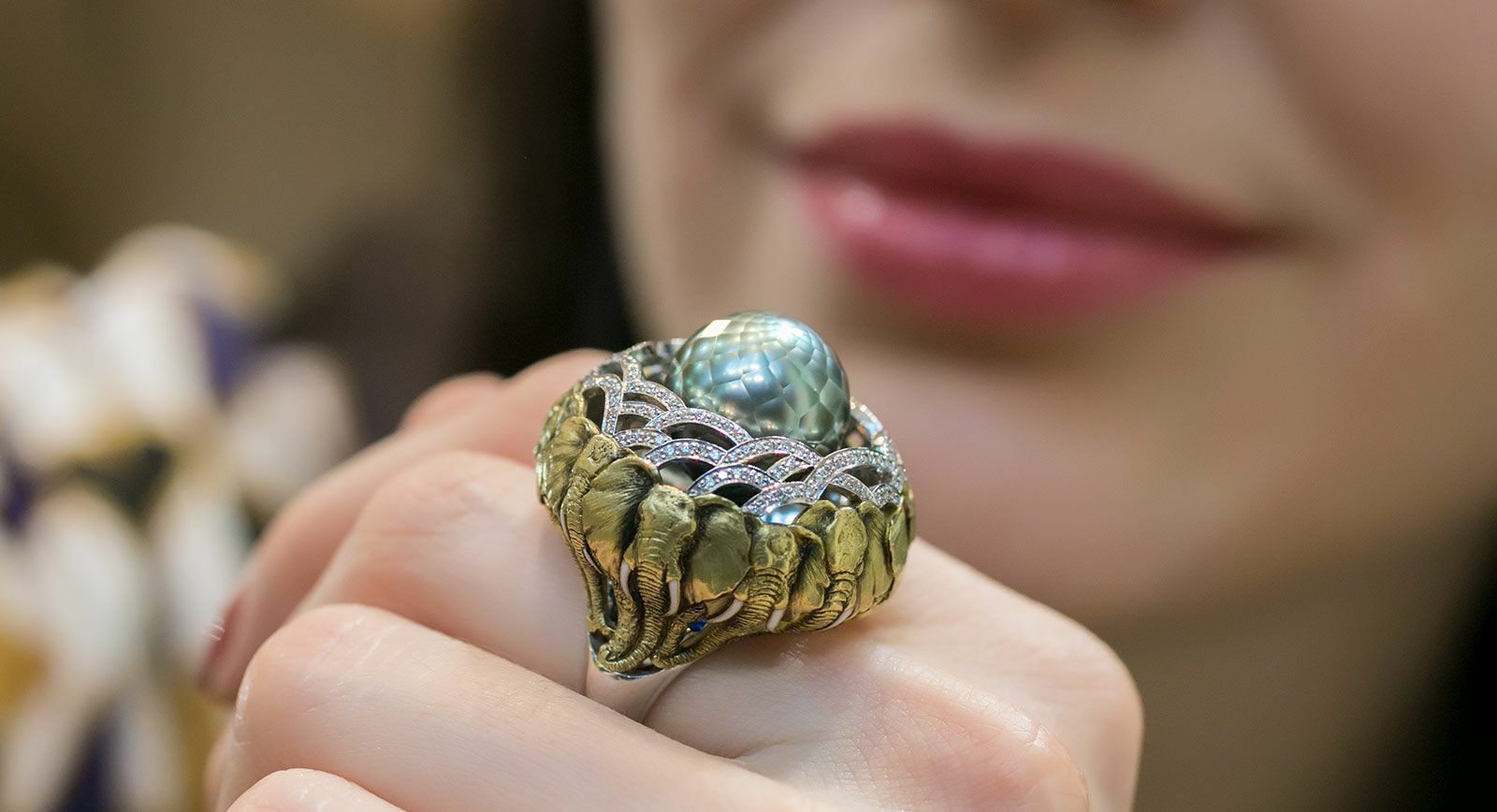 Since the end of 2018, the British family-owned company Bentley & Skinner – which specializes in exquisite antique jewellery, silver and works of art – has been hosting the work of a Russian virtuoso. That virtuoso is Ilgiz Fazulzyanov – known for his work in jewellery decorated with enamel. Bentley & Skinner's boutique is located at 55 Piccadilly, in London's Mayfair, and offers a selection of around thirty jewels, from delicate everyday rings and earrings to incredibly detailed haute joaillerie bracelets and pendants.

Bentley & Skinner were appointed the jewellers and silversmiths of Her Majesty the Queen and His Royal Highness the Prince of Wales. The history of this company dates back to 1997 with the merger of two much older companies: Skinner & Co - which has supplied jewellery to the English royal family since 1880 - and the slightly younger Bentley & Co., which was founded in 1934. 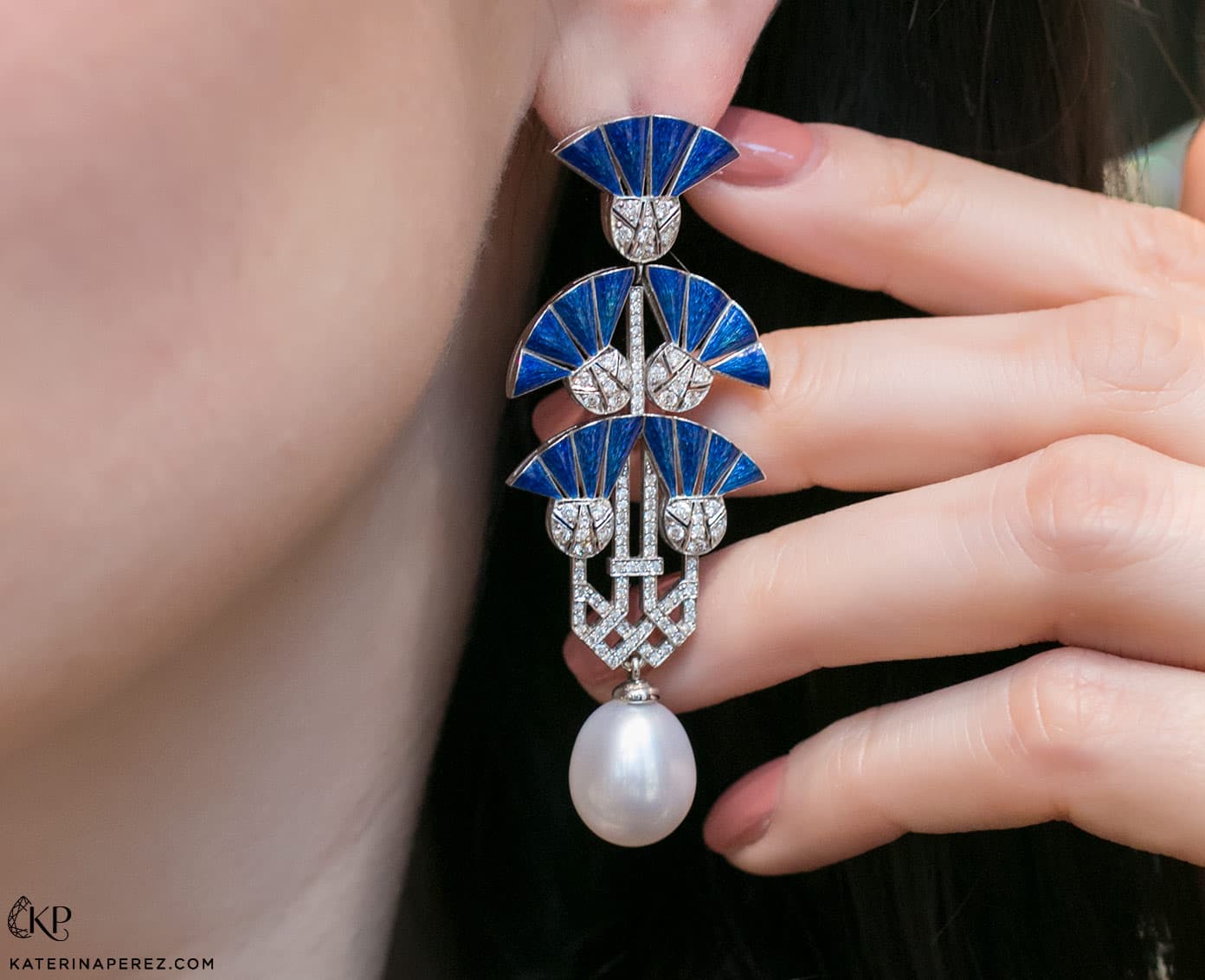 Today, the company provides a wide range of services, including valuation for insurance purposes, repairs, engraving, making pearl and custom jewellery to order. You can see the boutique’s workshop in action simply by peering through the window that faces Picaddilly street! Bentley & Skinner periodically organize exhibitions of unique jewellery, and Ilgiz Fazulzyanov – internationally renowned and known within the jewellery industry as the 'King of enamel' – has become the company's latest guest jeweller. 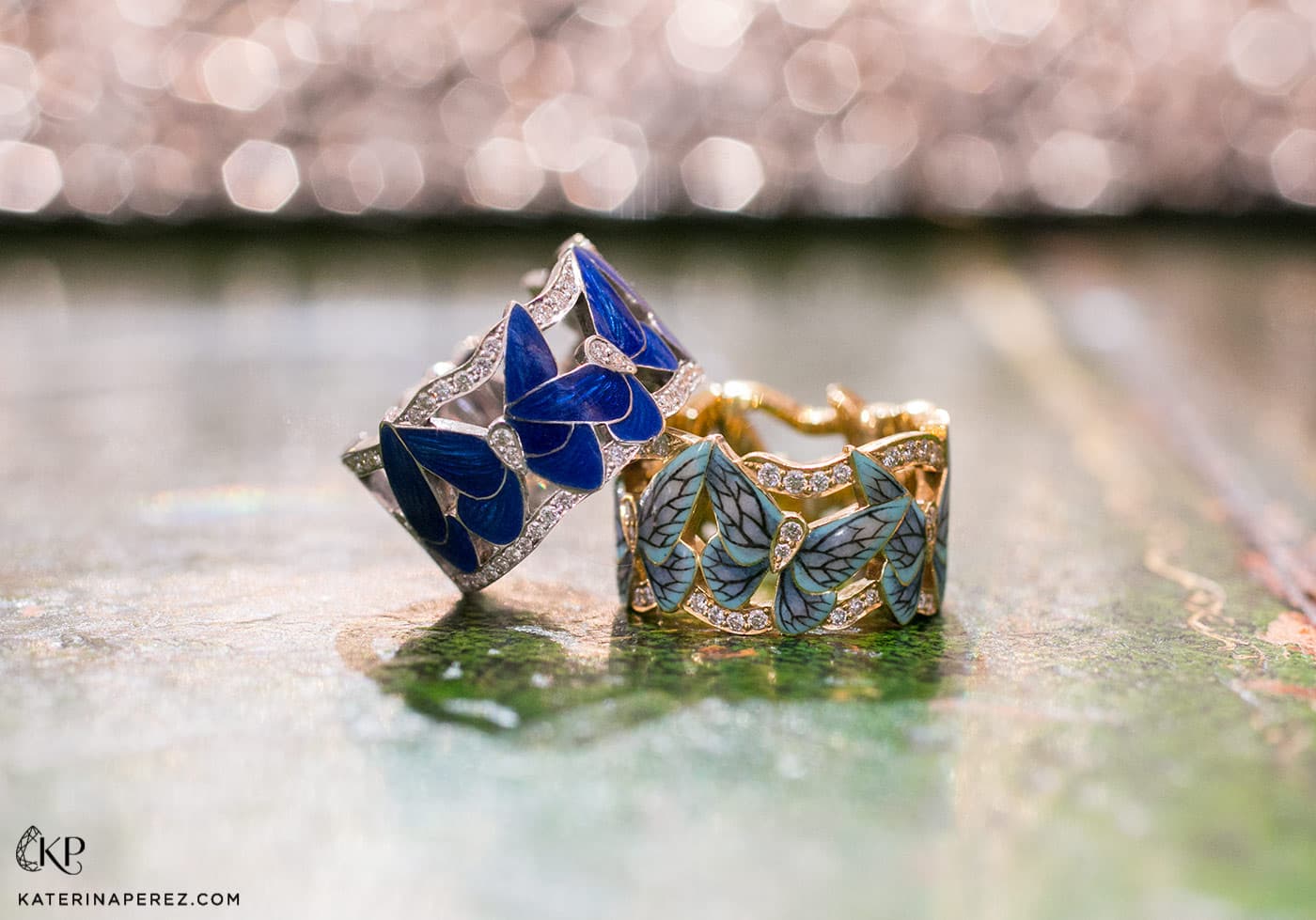 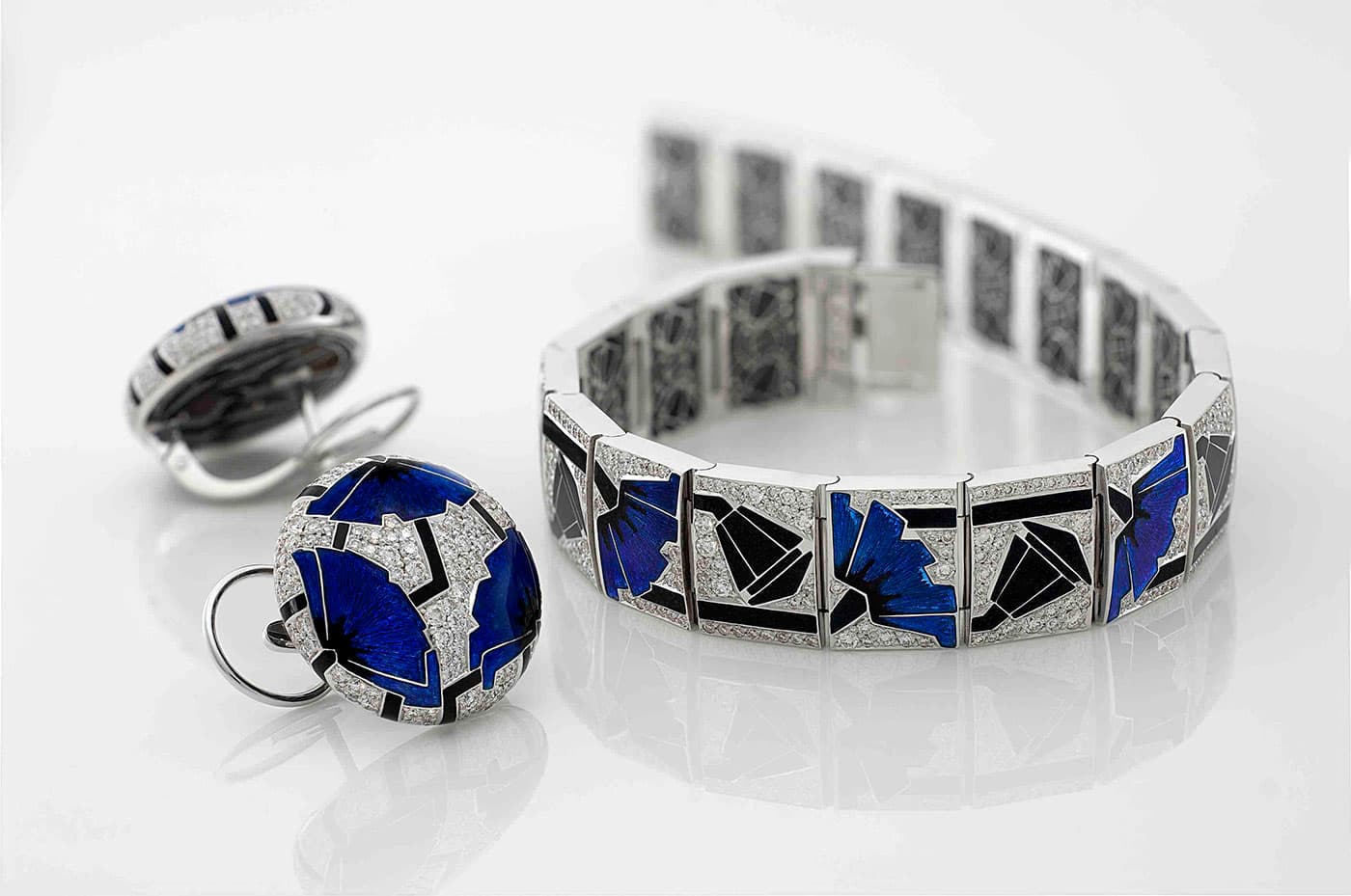 More than twenty years ago, Ilgiz mastered the techniques of working with a rather enigmatic jewellery material - enamel - and since that point it has become an integral part of his work. Pieces created under the name Ilgiz F. are extraordinarily expressive, bright and unique, thanks to the spectrum of enamel shades with which the jeweller works with. Only masters of the highest category are able to 'paint' gold with enamel, using it like a canvas, and creating smooth or juxtaposing transitions from one colour to the next. Having recently visited Bentley & Skinner, I was fortunate enough to marvel at the celebrated masterpieces of Ilgiz F. in person, and today I would like to share a few of them with my readers. 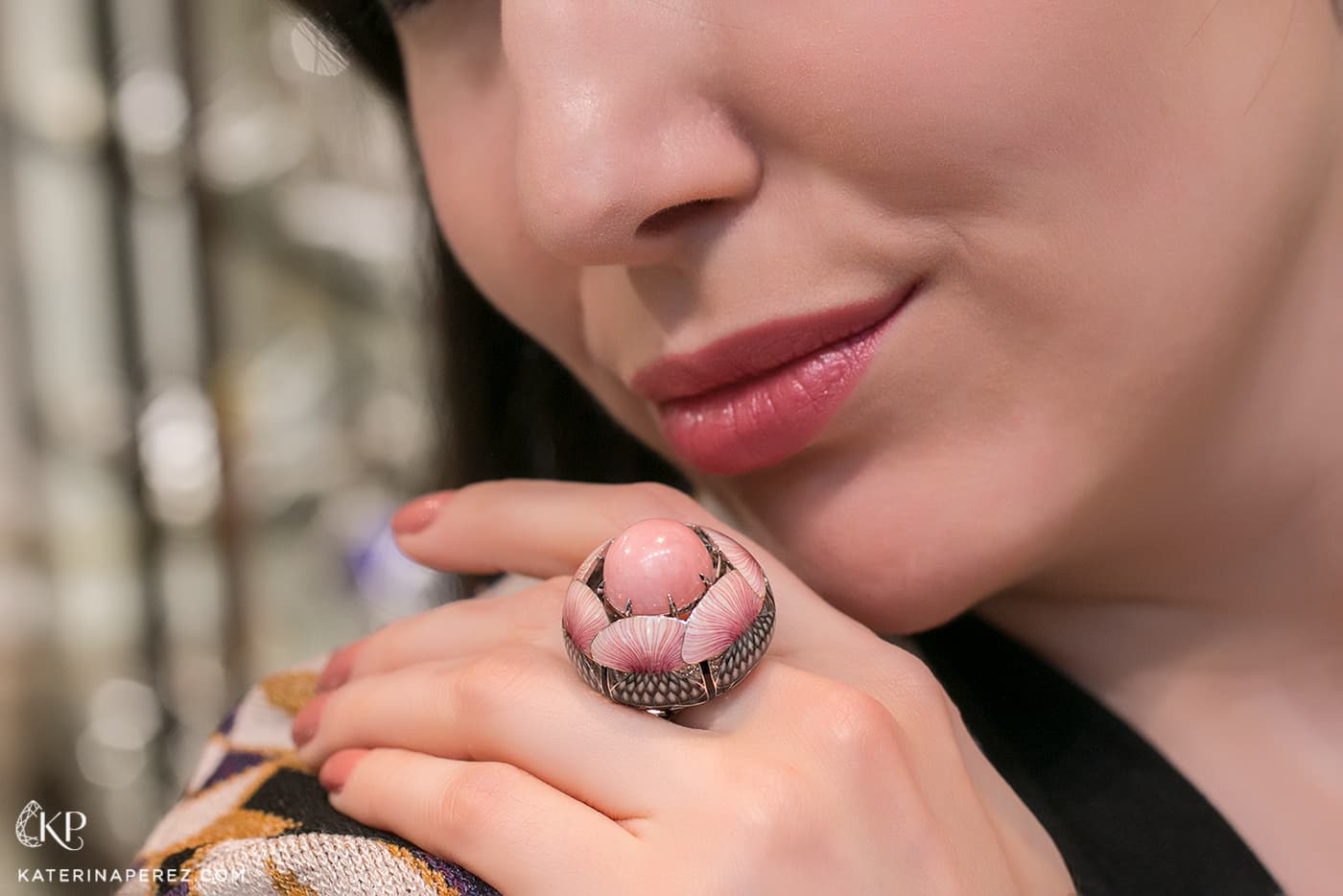 The history of the burdock as a motif in jewellery is a fascinating one; the flower was beloved by jewellers at the beginning of the twentieth century. This history of the purple flower left a substantial impression on Ilgiz Fazulzyanov and upon inspection, the jeweller grew to realize that this flower has an architectural beauty, a perfection of construction and form, that leant it to almost any design. Since then, Fazulzyanov has dedicated a number of works to the burdock flower, including a set of magnificent and laconic earrings that hark back to aesthetics of the Art Deco era. It was this period of the early 20th century in which creatives from a range of artistic disciplines were able to find beauty and sophistication in the simplest of styles. 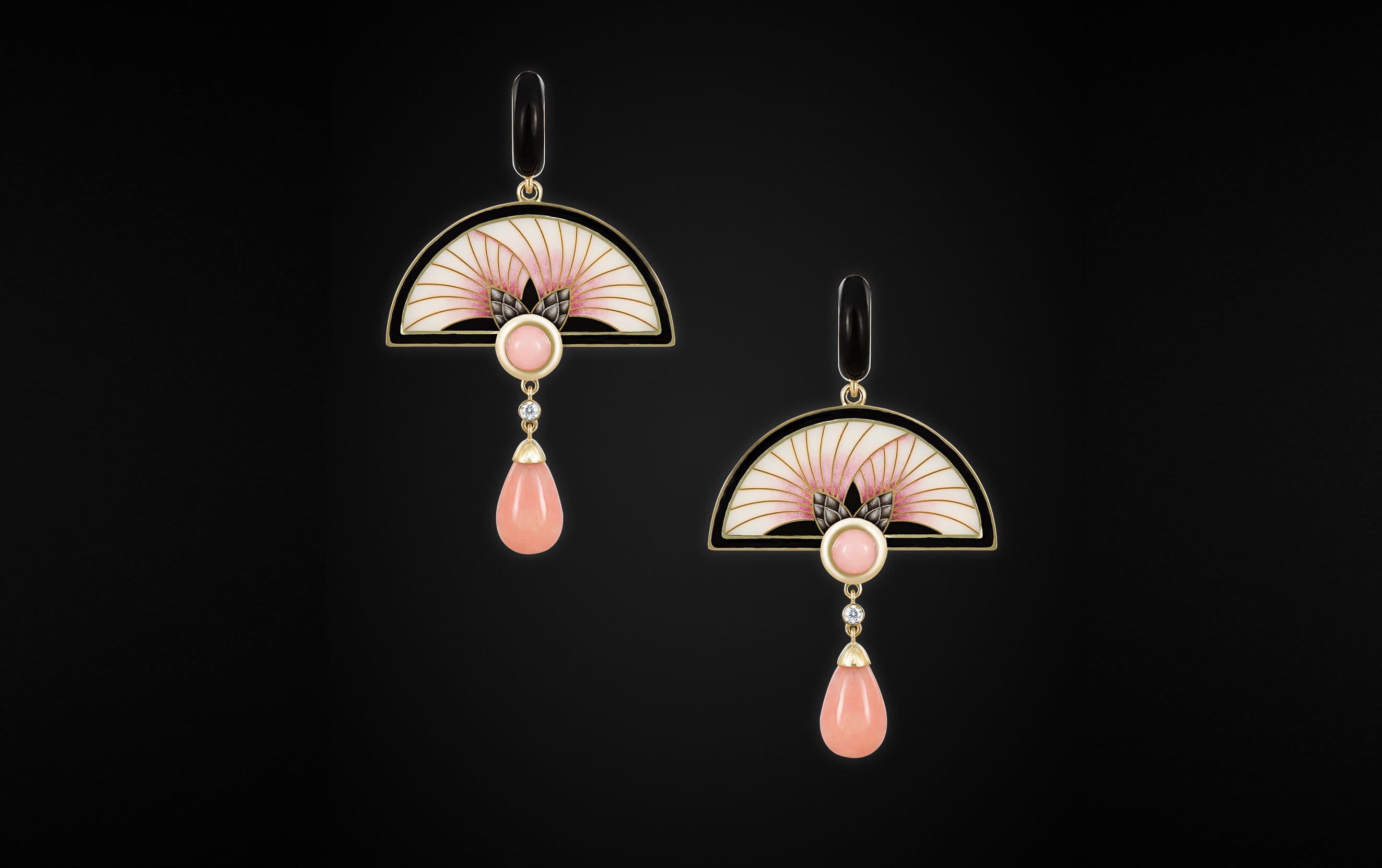 The luxury bracelet with the name 'Burdock' was included in the collection as a dedication to the 25th year of Ilgiz's creative practice, having already been presented at an exhibition in the Kremlin in 2016. The piece is composed of gold rectangles embellished with enamel, and capped with perfectly transparent rock crystal, and was inspired by the Fazulzyanov’s childhood memories of an old buffet, in which there was a host of marvellous creations. For him - with a fervent imagination - thick faceted glass represented the threshold to a magical land, and Ilgiz conveys this sensation of peering though into a different and mystical world throughout his collection. 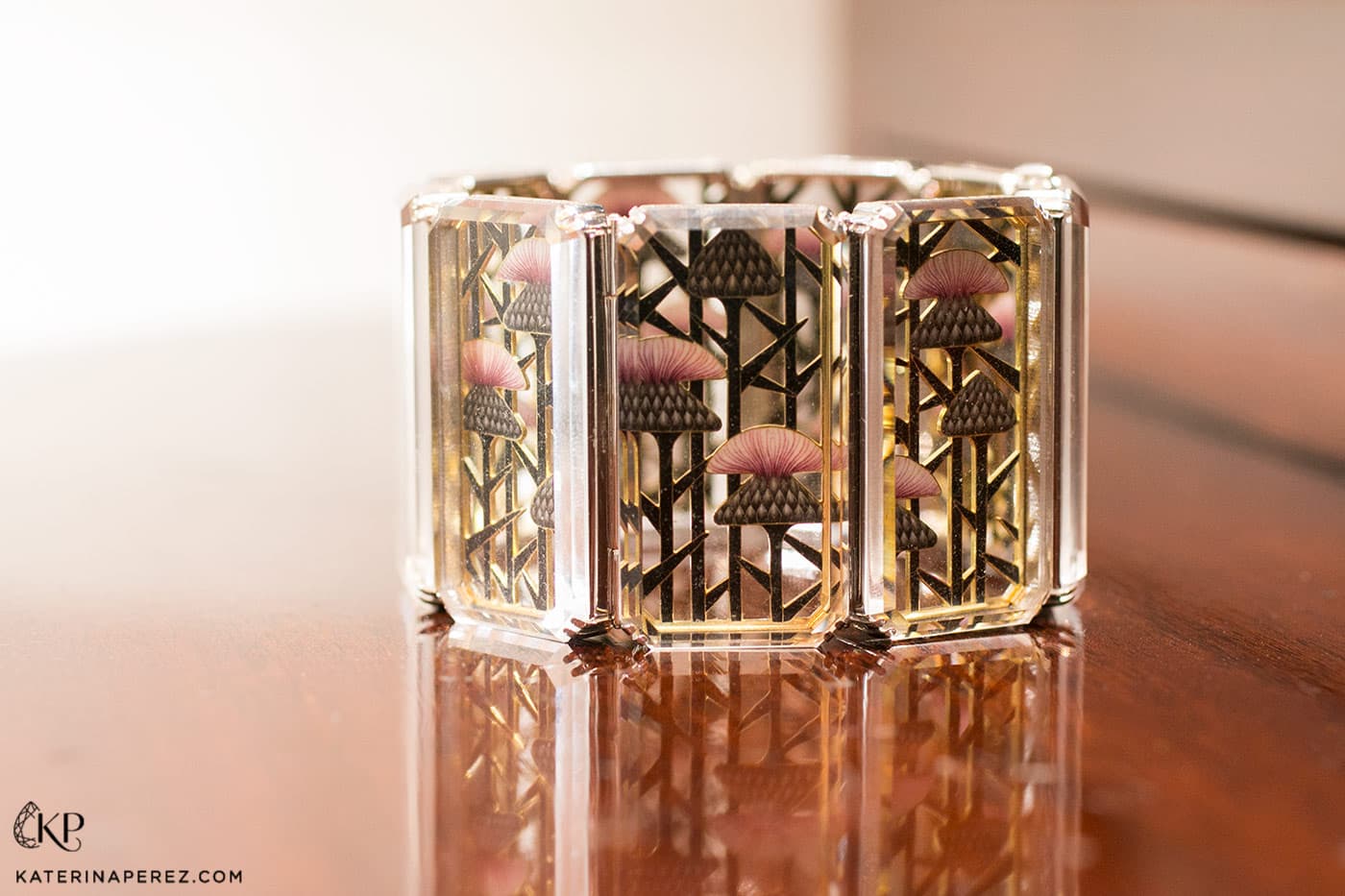 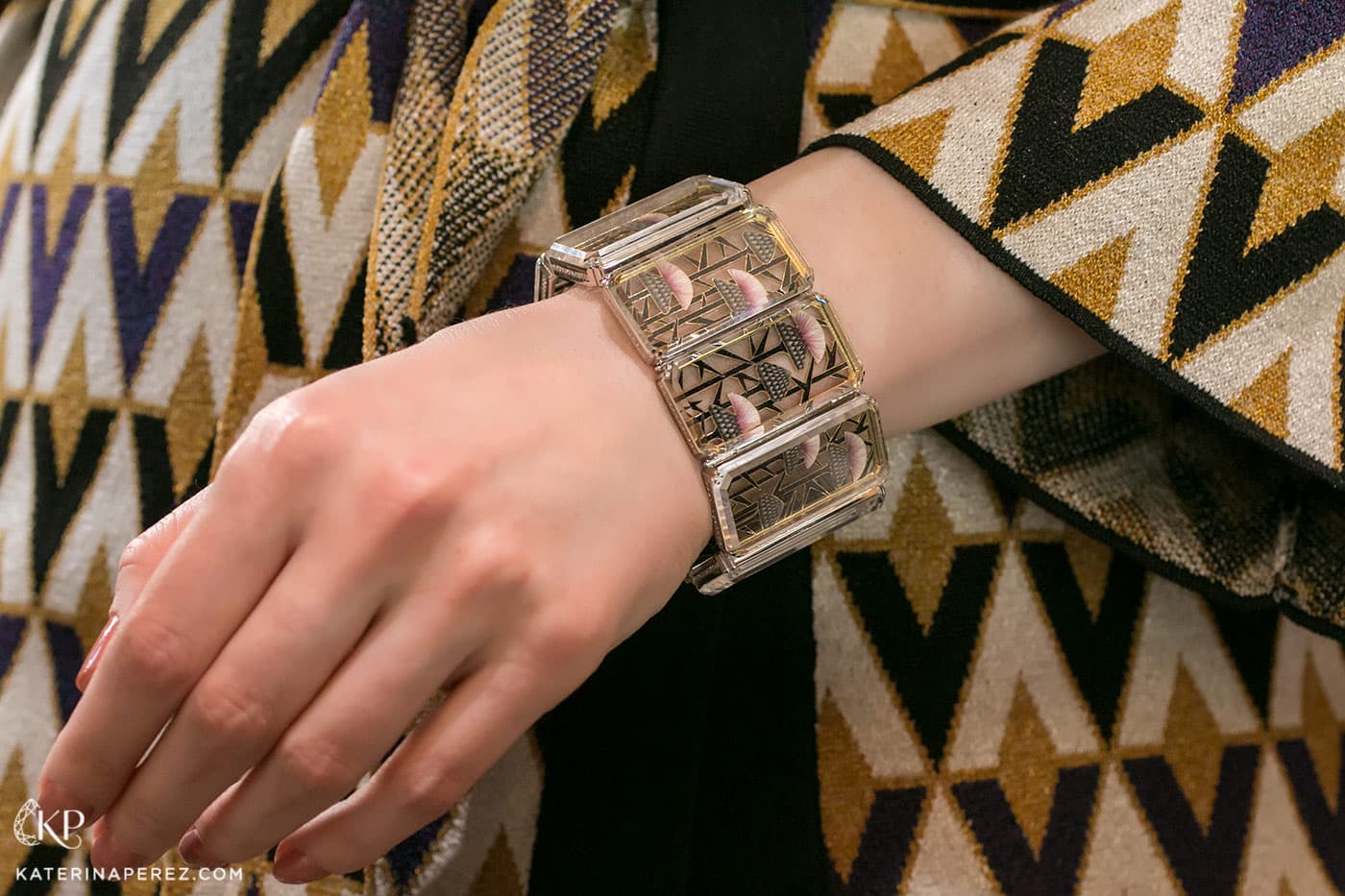 One of the most enticing scenes depicted in Fazulzyanov’s enamel is one that seeks to catch dragonflies and butterflies in motion; showing their fragility, the colour of their wings, the form of their bodies and capture that singular moment when they are about to take off into flight, transferring this fragment of suspended time into a 'frozen' movement. This idea is the central theme of the intricate pendant entitled ‘Dragonflies’, which is one of the main exhibits at the Kremlin. The work is made in three dimensions, and makes use of several types of enamel: both traditional and vitreous, 'gluing' together one edge of a gold frame to another. 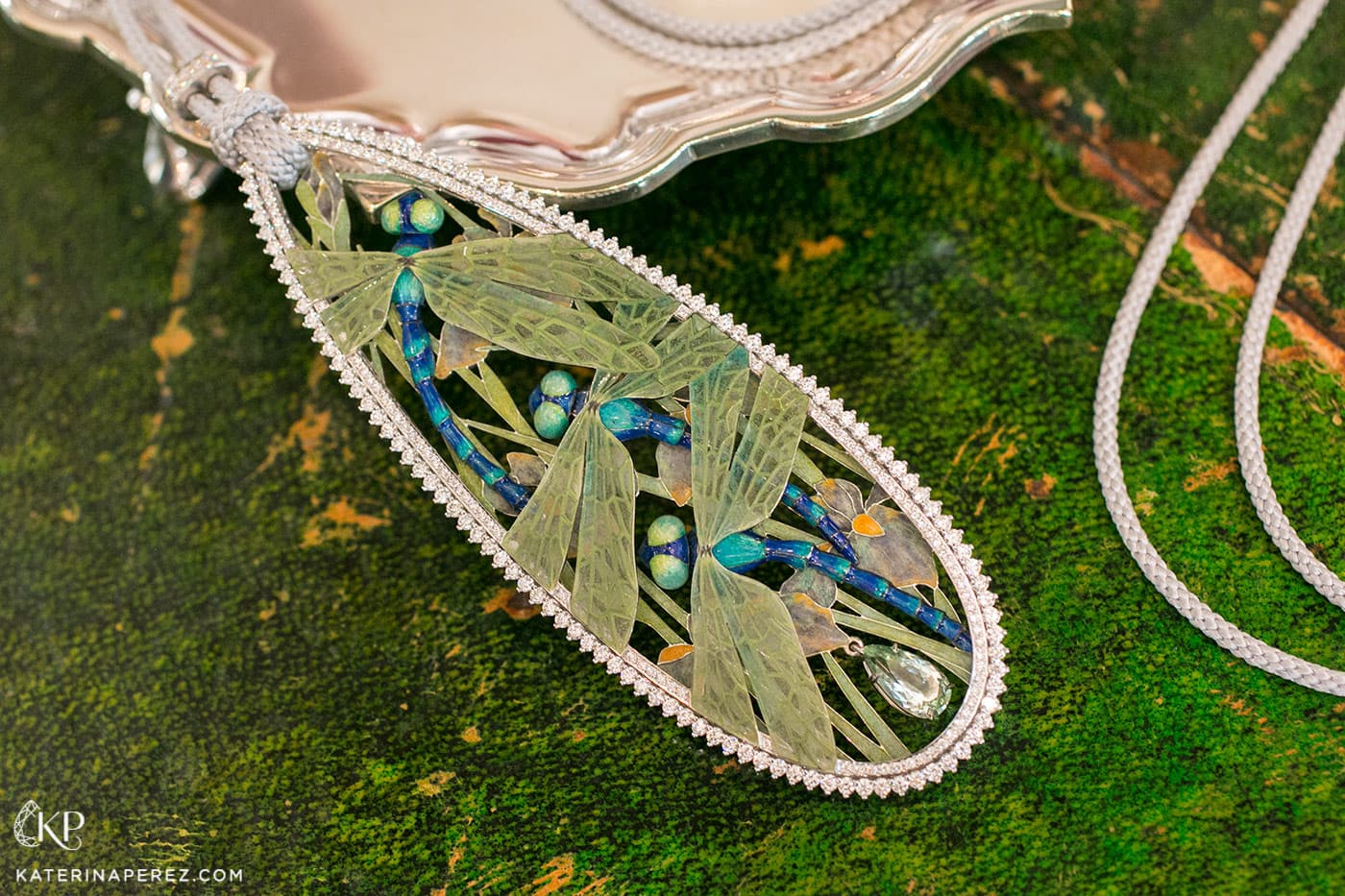 It is notable that almost all the ideas of Ilgiz’s jewellery have emerged from the jeweller’s personal observations of nature, and we find in the room containing his work both statement jewels as well as miniature beauties. For example, in the case of 'Wind in the Field' ring, we can see an example of an experimental use of sculptural gold. The little secrets of nature open up within: the wind brushes aside the ears of the corn, revealing to the observer the delight of a grasshopper hidden between the blades, accompanied by a delicate dewdrop made from opal. 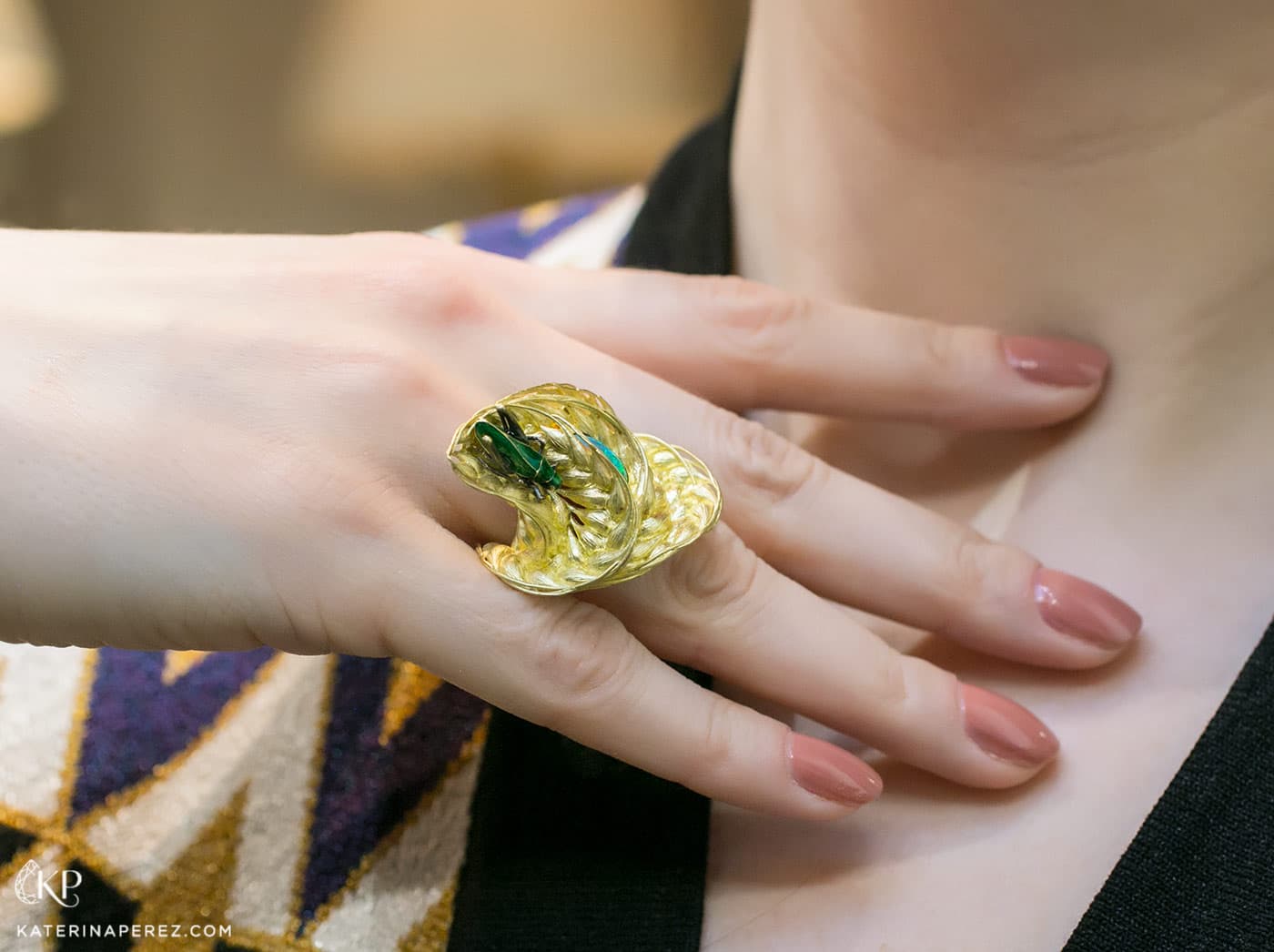 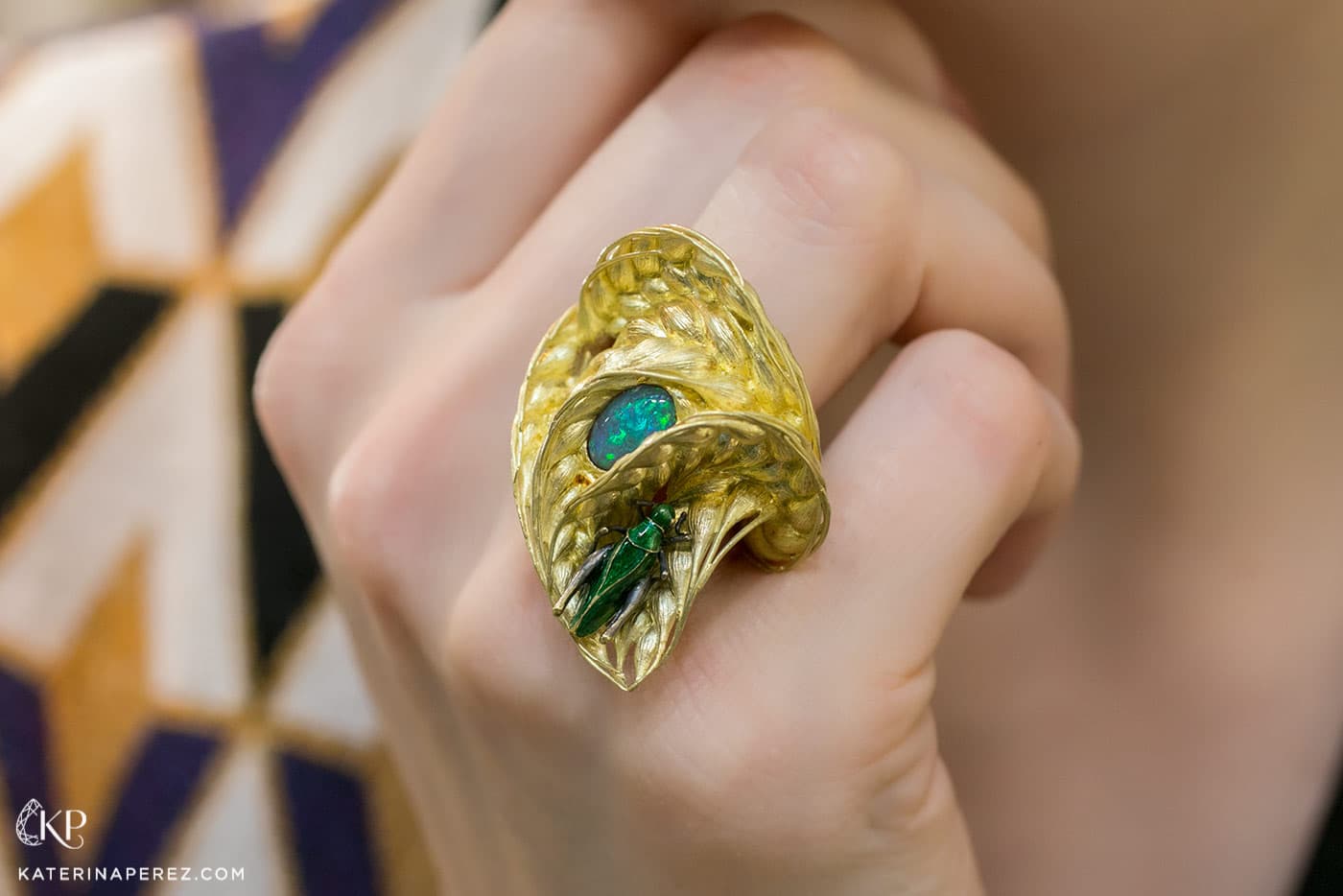 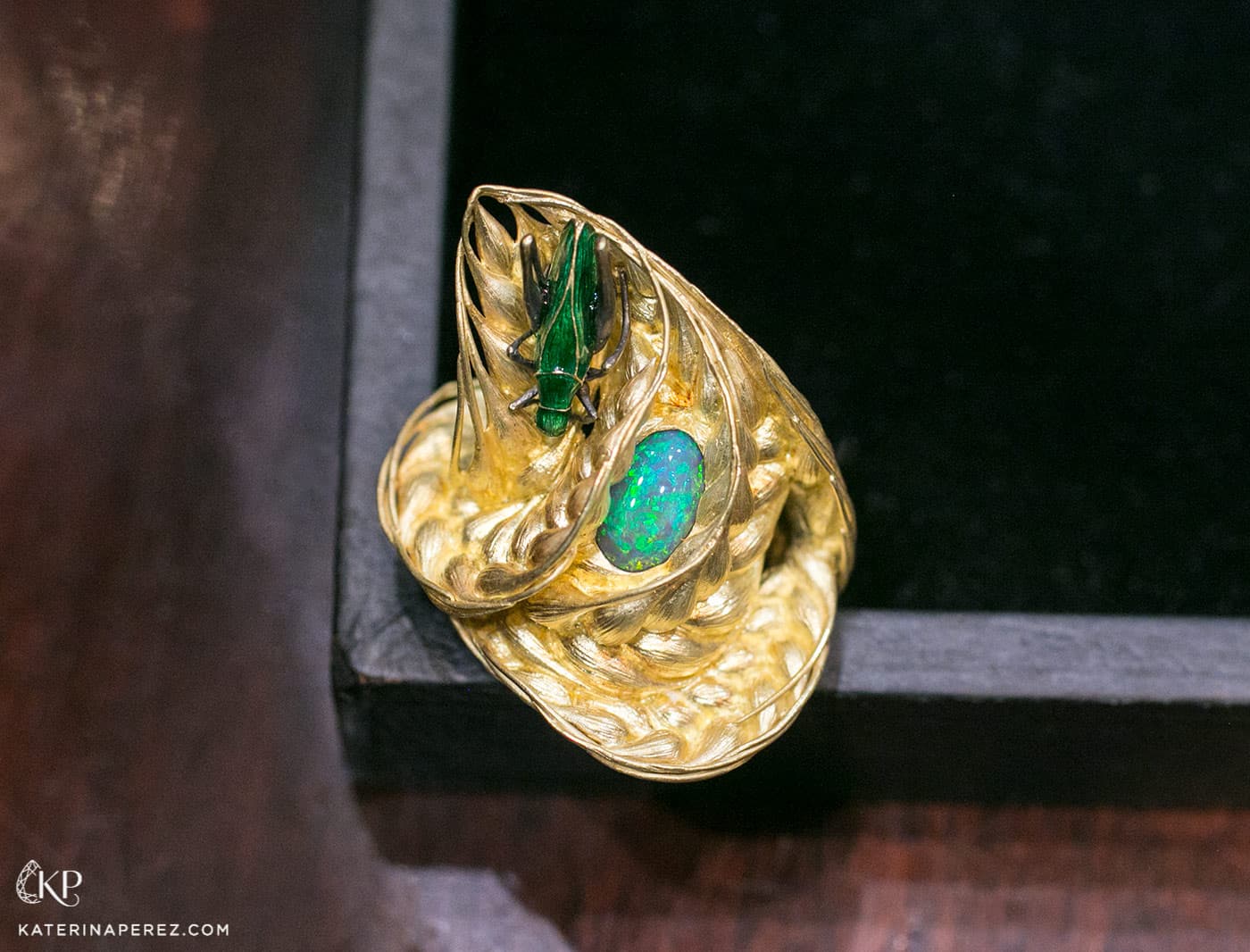 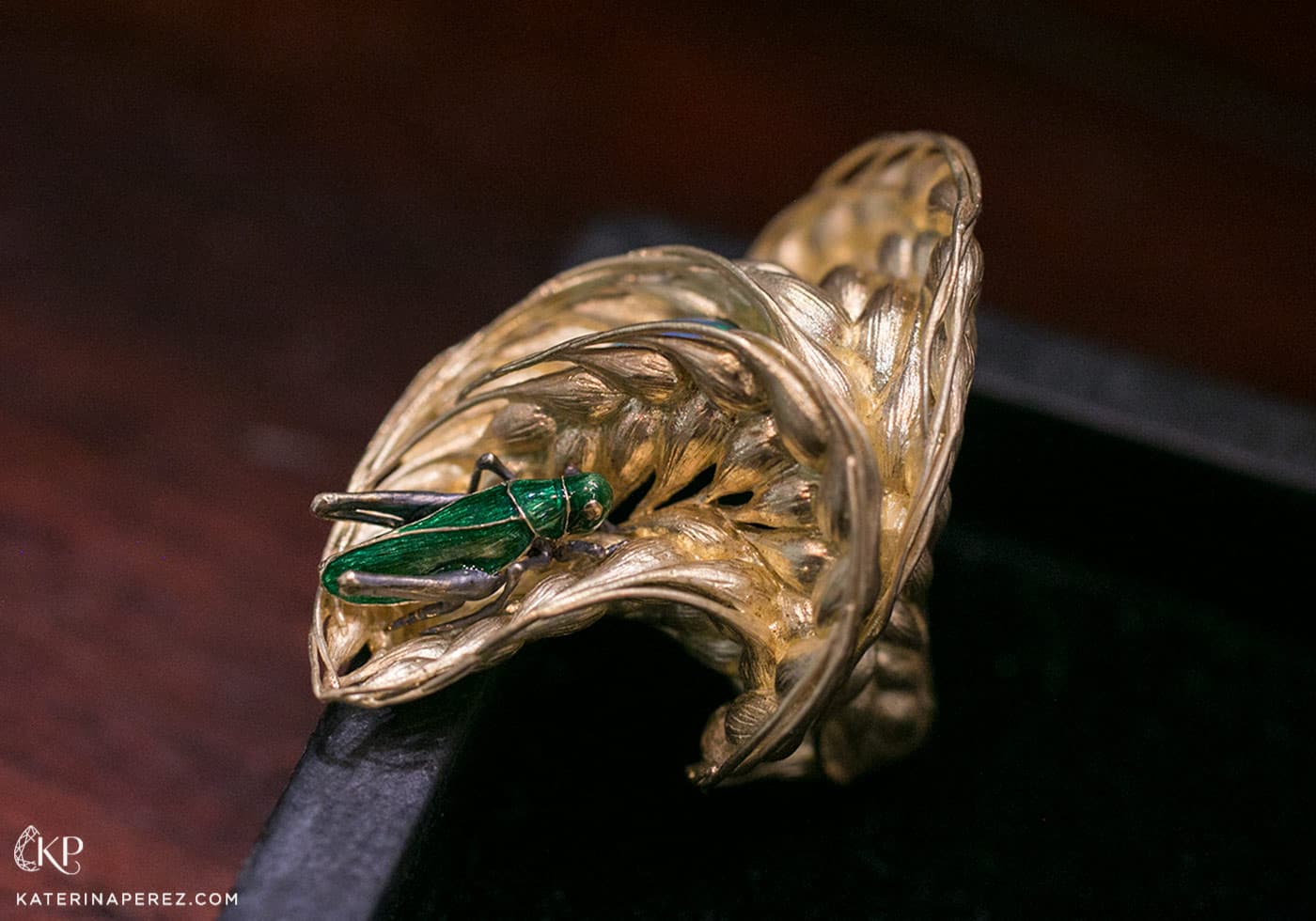 In the case of the 'Elephants' ring – made of gold, pearls and diamonds – we find a piece dedicated to the entire continent of Africa along with its highest mountain, Kilimanjaro. The facets of the beautiful pearl at the heart of this masterful work echo the form of the elephant figures which work to form the main body of the piece. 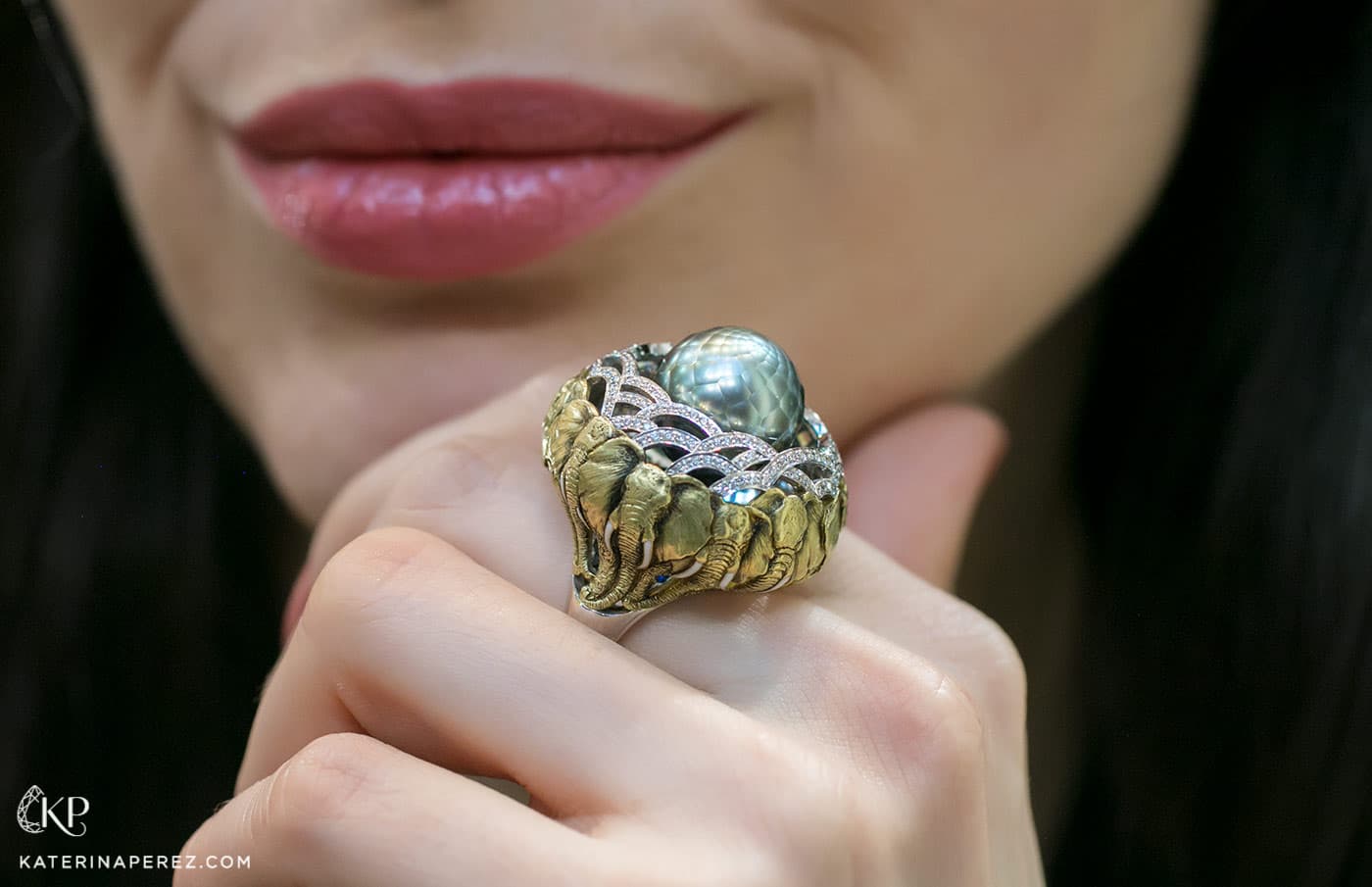 The bracelet, earrings, rings and pendant described here are only a small fraction of the wide variety of jewels created at the hands of this immensely talented jeweller. After an upcoming visit to the Galerie Igliz F. boutique at 4 Rue de Miromesnil in Paris I will be sharing more masterpieces with my readers – so keep your eyes peeled for more!

SPECIAL THANKS: ILGIZ F. FOR SPONSORING THIS ARTICLE