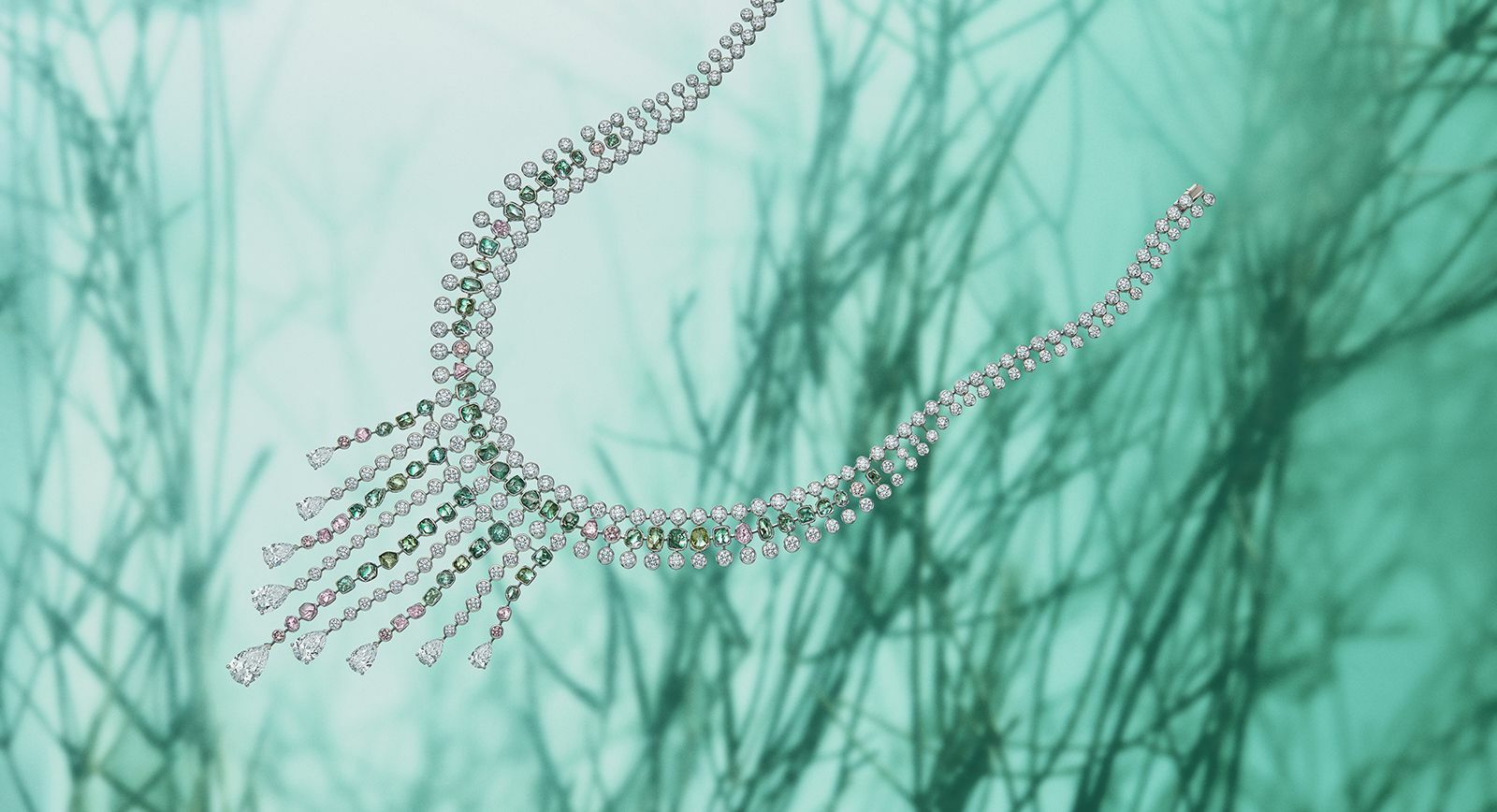 At this winter’s Couture Fashion Week in Paris, jewellery Maison De Beers unveiled a new high jewellery collection that is simply dazzling, both literally and figuratively. In its typically delicate manner, the British company reminded us of the importance of preserving peace for future generations through jewellery with its latest collection Reflections of Nature, inspired by the landscapes of different countries.

The Reflections of Nature high jewellery collection by De Beers received creative direction from the brand’s chief designer, Grace Lepard. Through the collection’s 39 pieces, she offers her perspective on the natural beauties of different continents and how they can be translated into De Beers diamond jewellery. Playing with diamonds of completely different natural hues (some of which were cut by hand, others left uncut in their natural form), Grace has produced five individual, stylish sets that are inspired by the most picturesque landscapes. 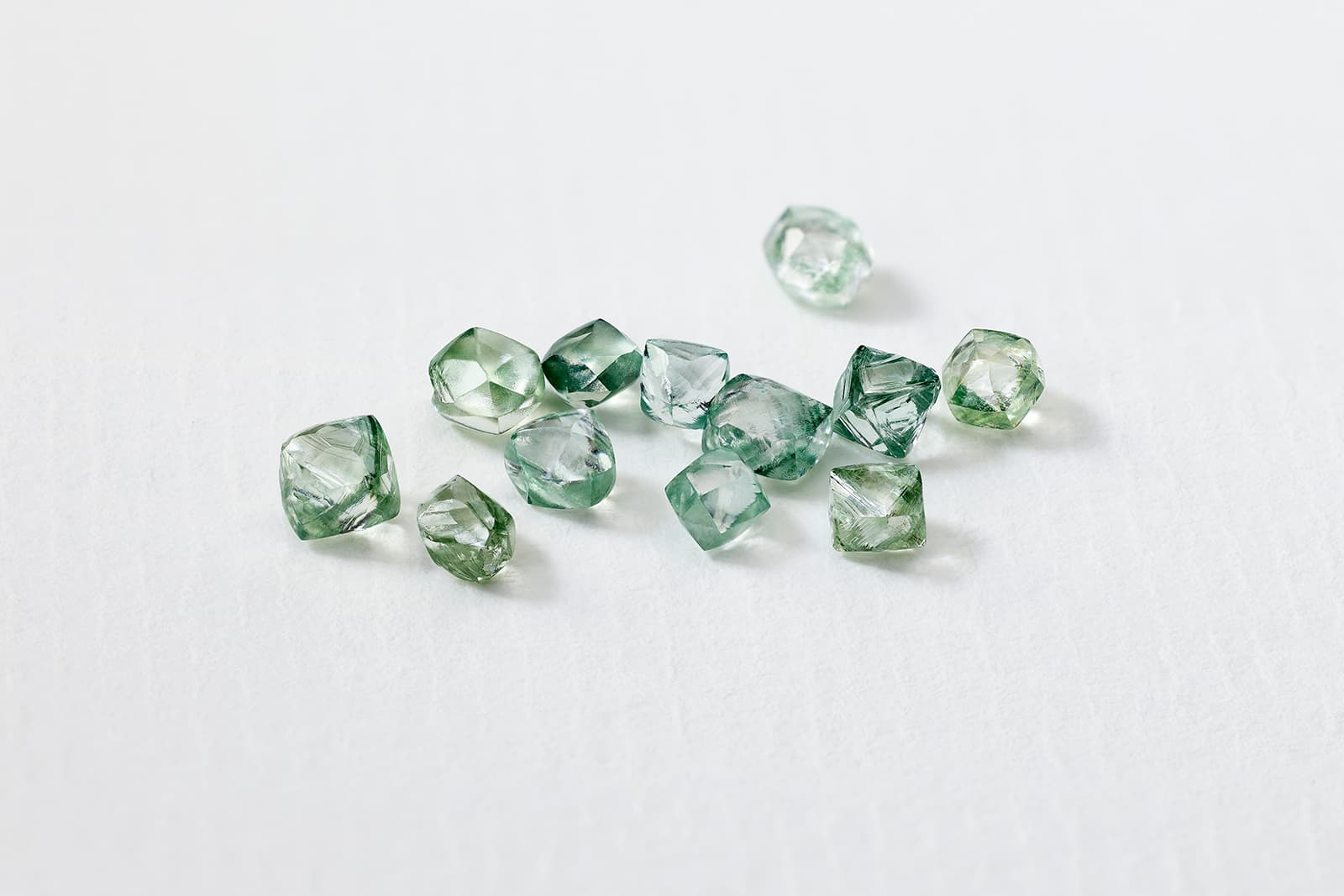 “Our diamonds are natural treasures that have been forged for billions of years deep underground. Our passion for nature and our belief in the importance of eternity is why we strive to preserve the natural world for future generations. This is one aspect of Building Forever, our long-term commitment to improving people’s lives and protecting the planet,” announces De Beers. 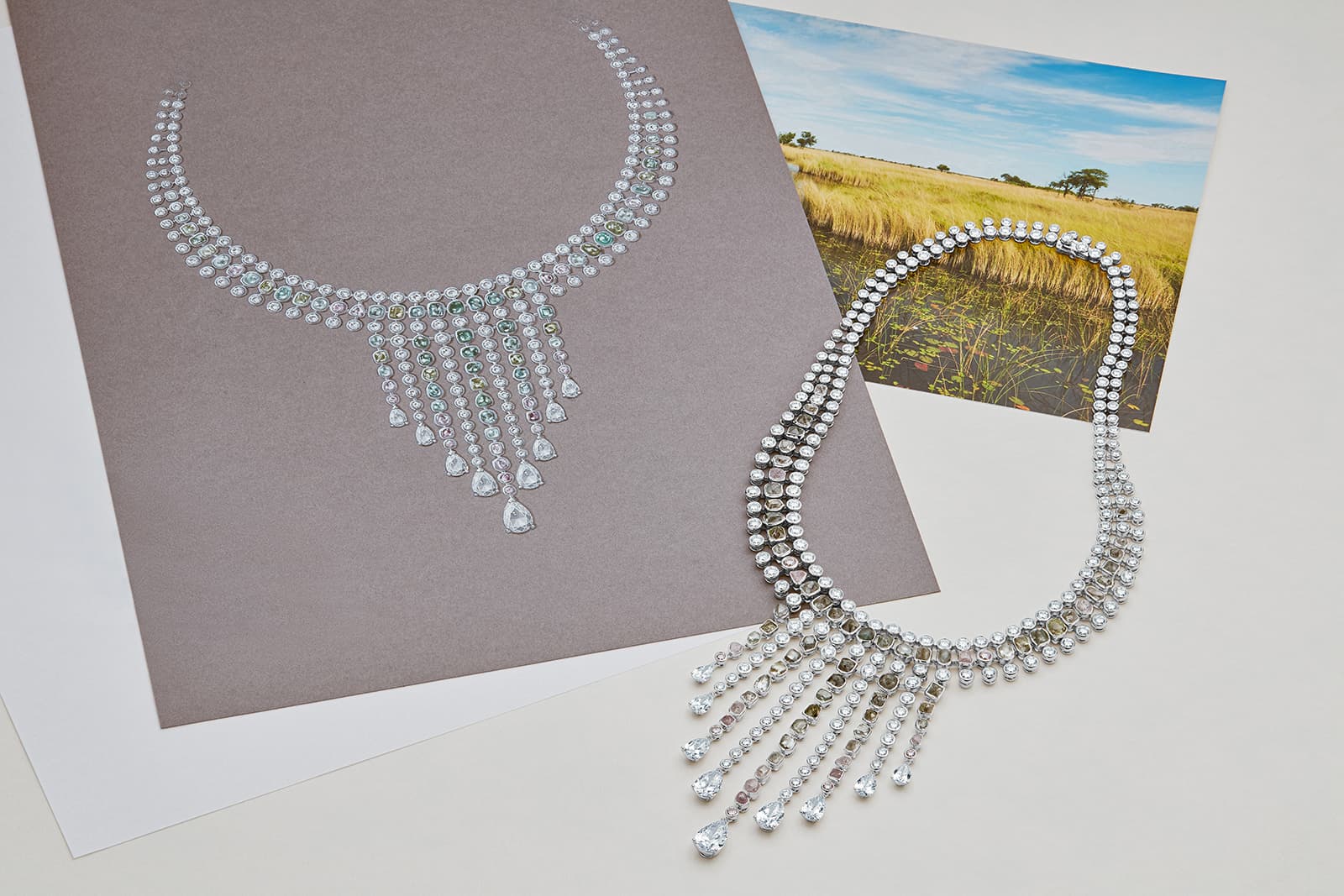 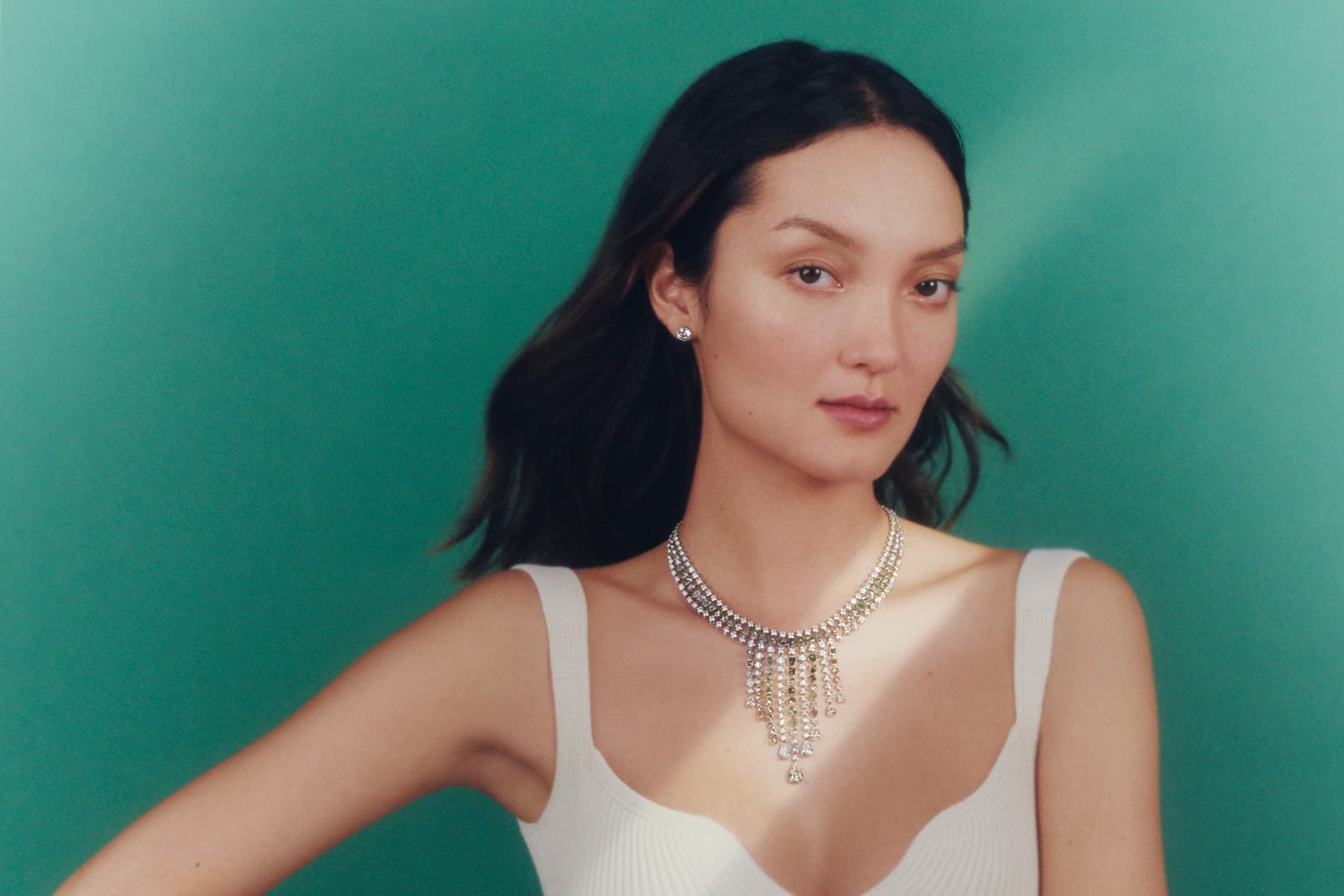 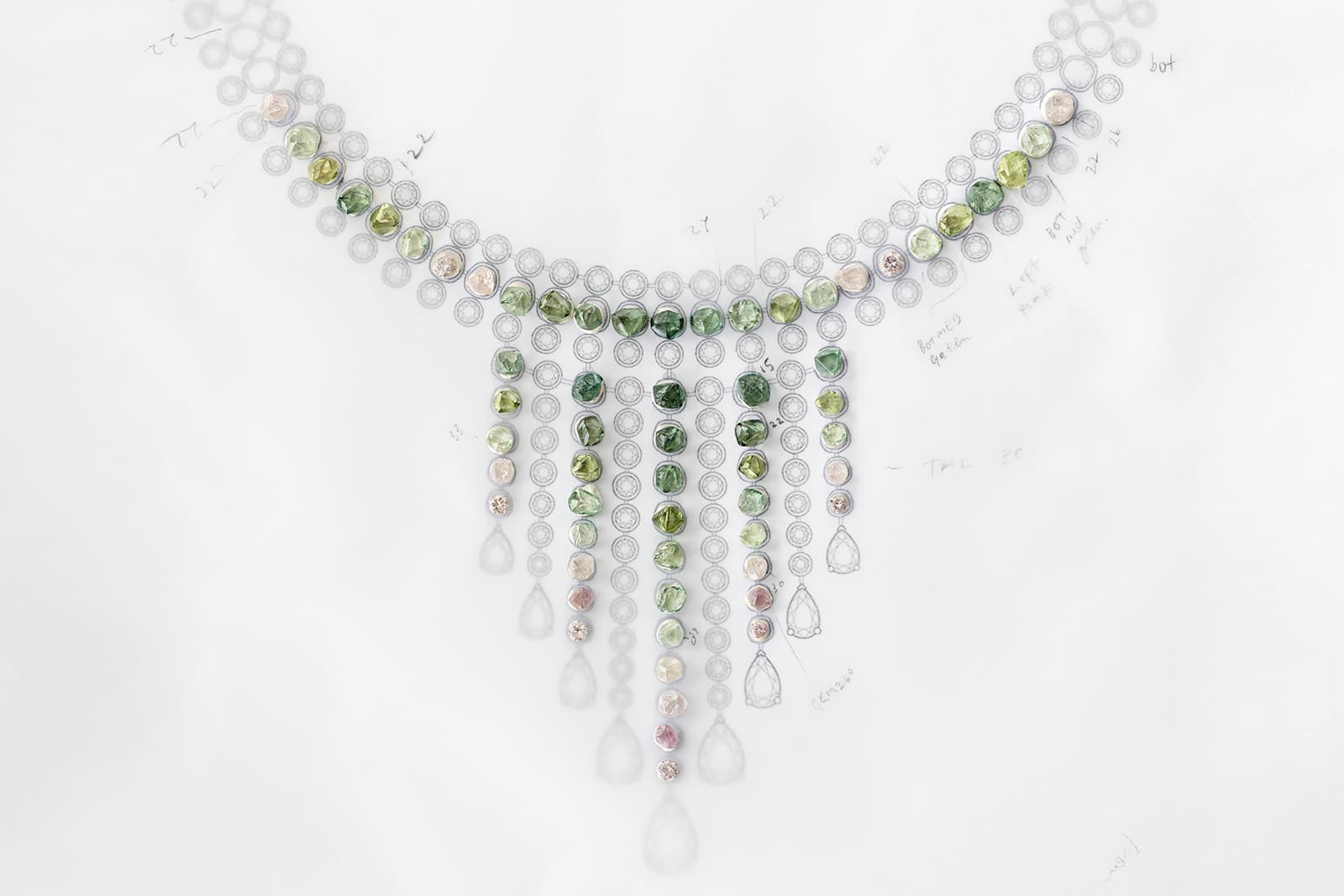 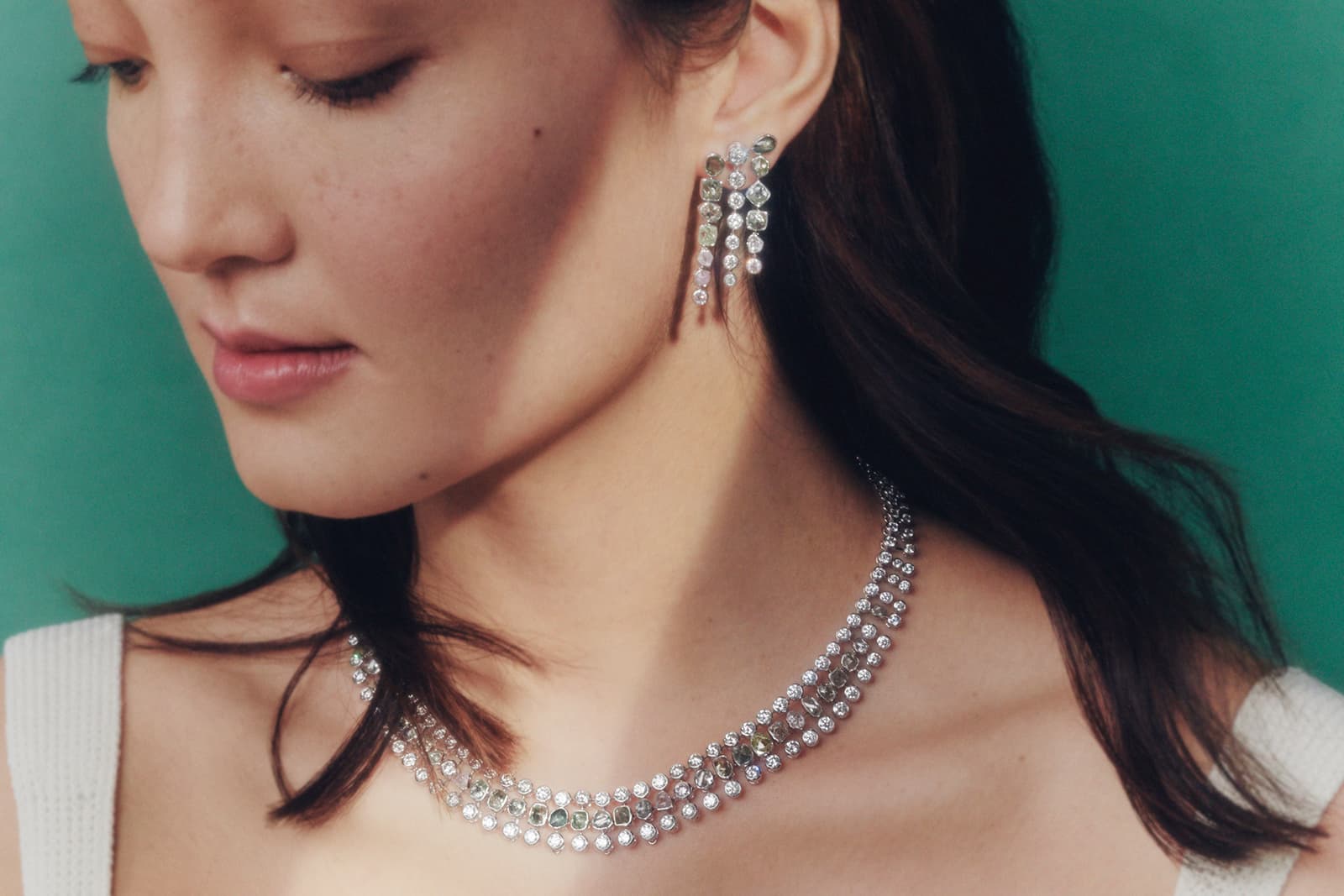 The designs of the Okavango Grace set are inspired by the Okavango Delta, the Earth’s largest inland delta located in Botswana. Its maze of waterways, floodplains and islands has become the region’s primary source of water and is an oasis that attracts one of the largest concentrations of wildlife in Africa. Rough diamonds in shades of green, pink, brownish pink and grey, reflecting the unbridled nature of the Okavango, contrast with graded round colourless diamonds that are so glittery they are reminiscent of water. It took a long time to develop the required colour palette because the percentage of naturally colourful diamonds that are mined versus the number of mined colourless diamonds is negligible. An interesting aspect of this necklace’s design is the ability to transform it into a “riviera” by removing the pendant that is in the centre. 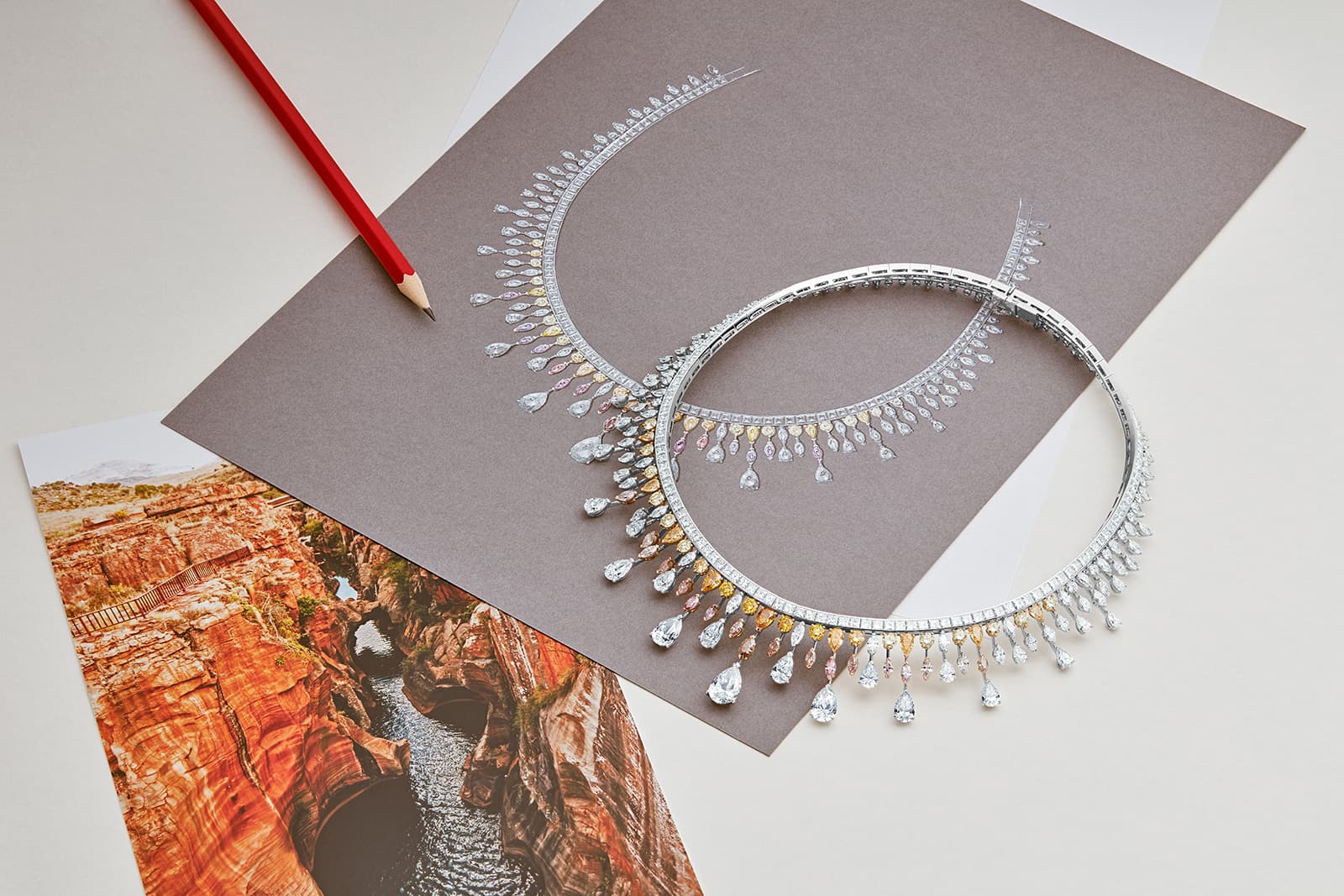 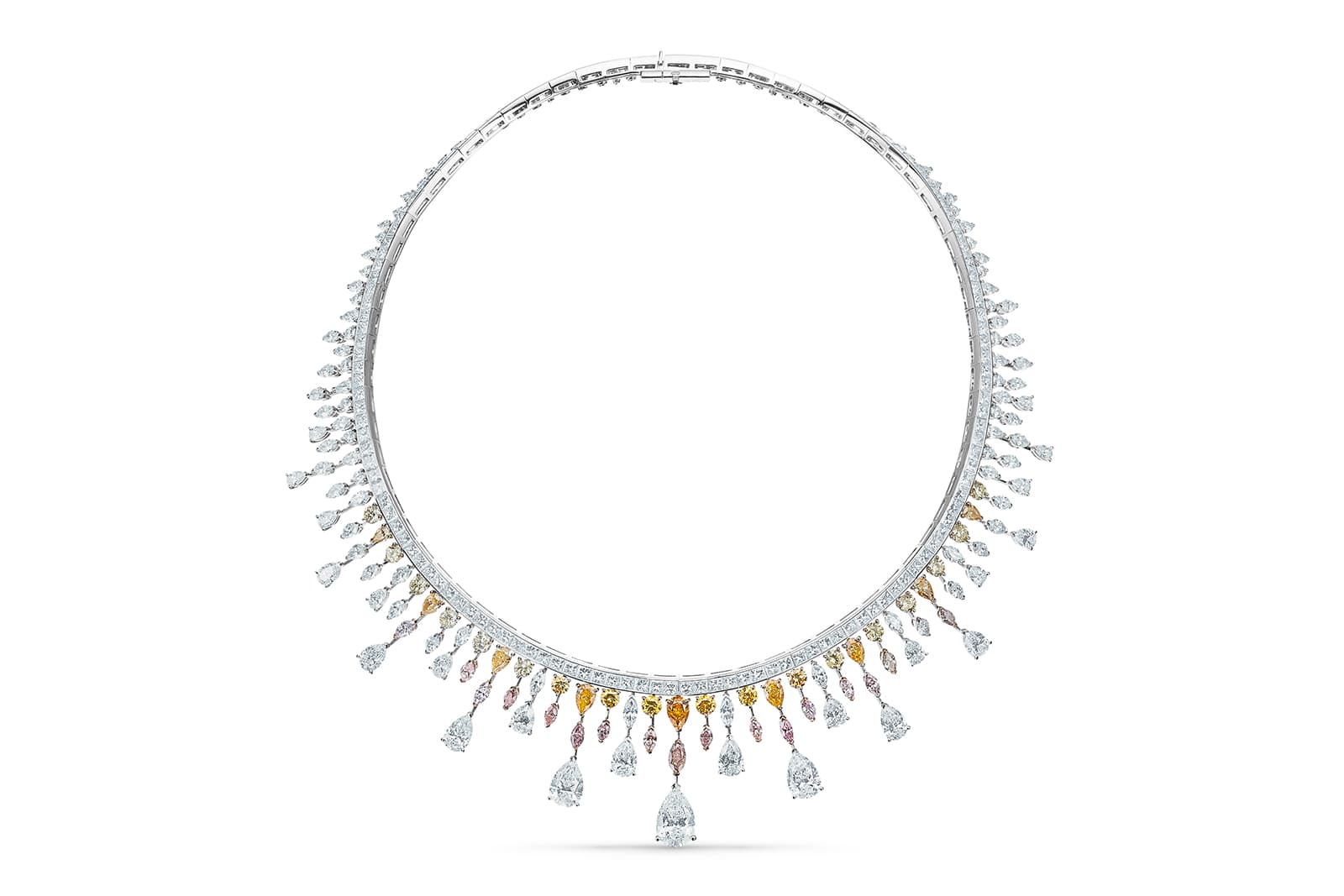 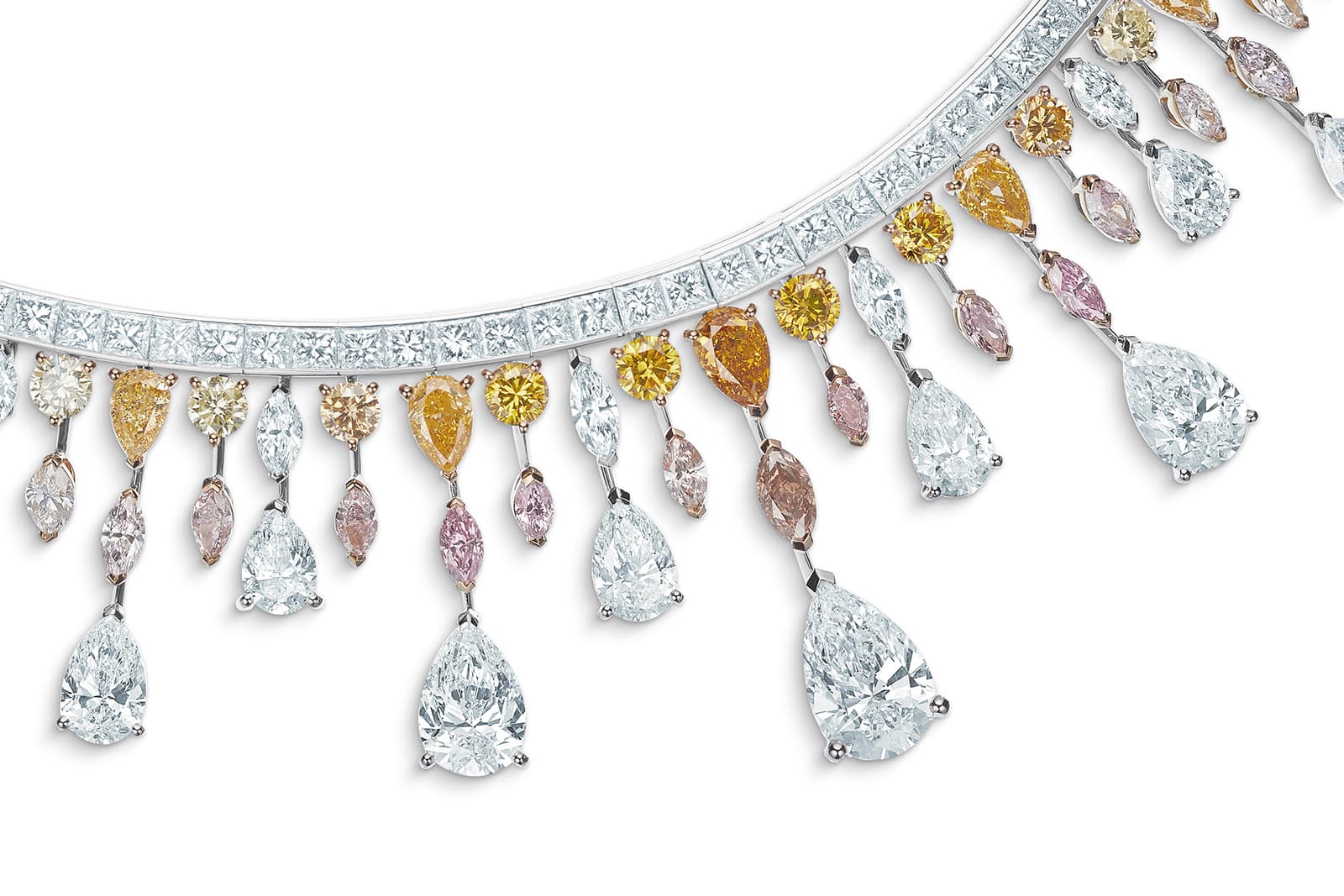 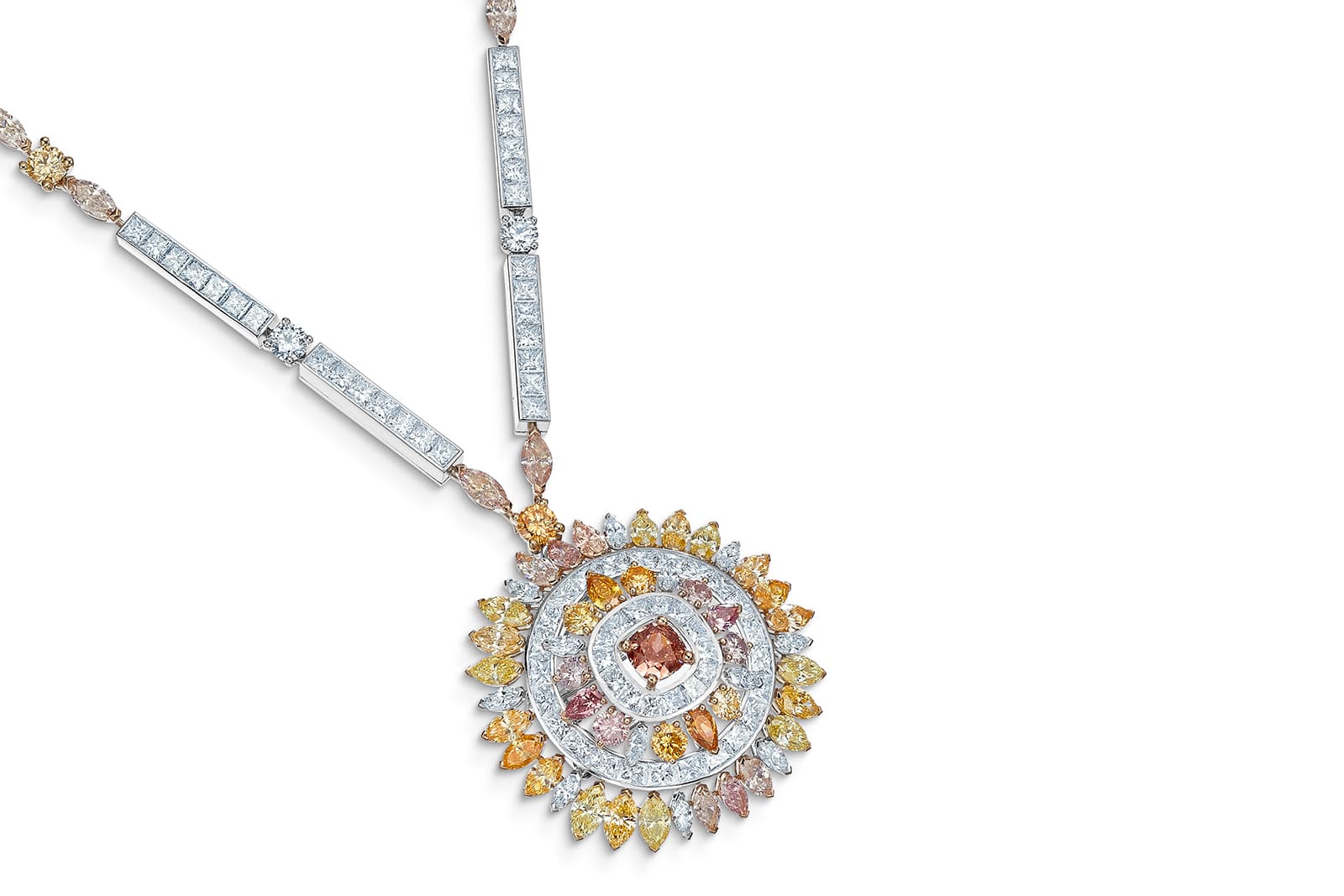 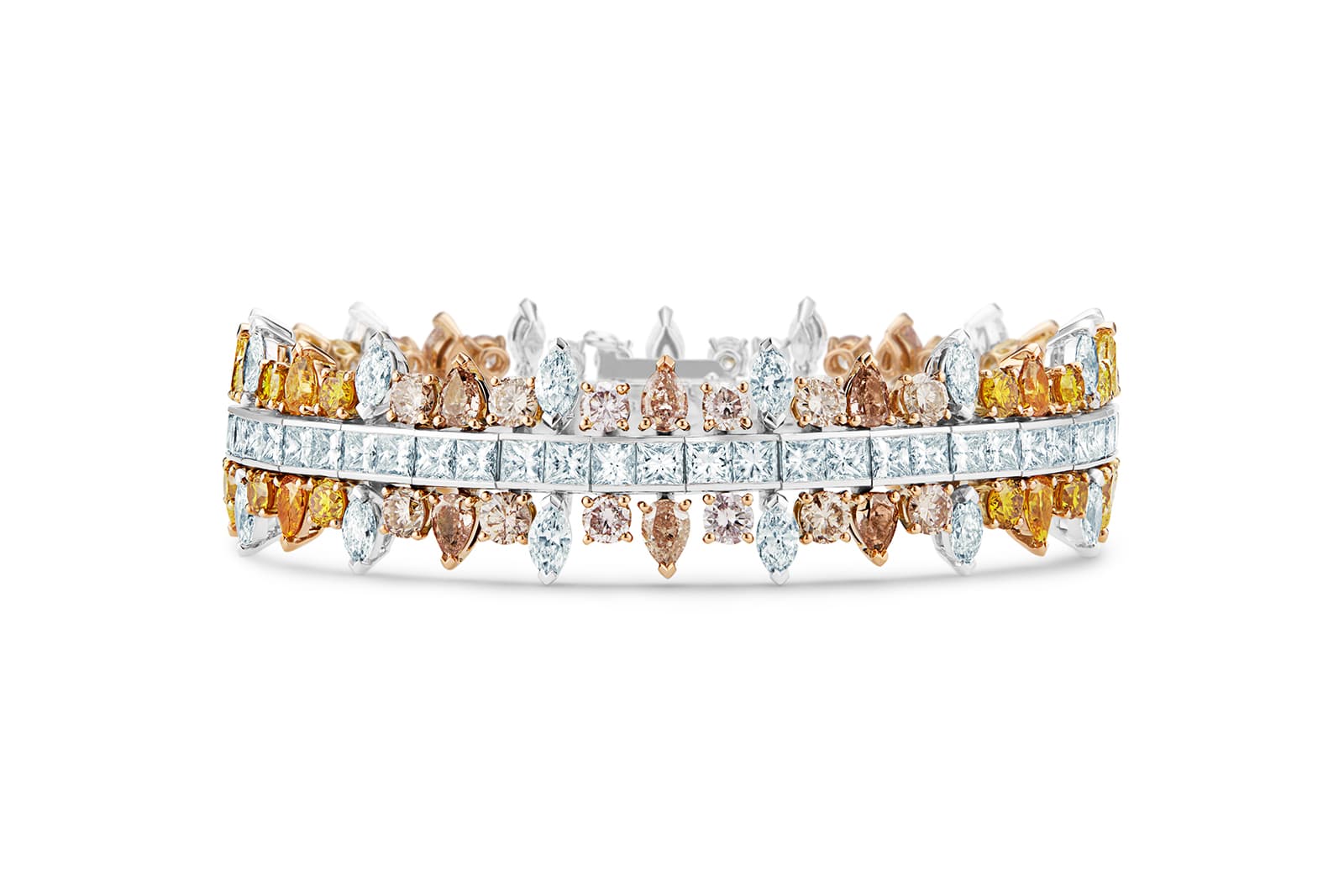 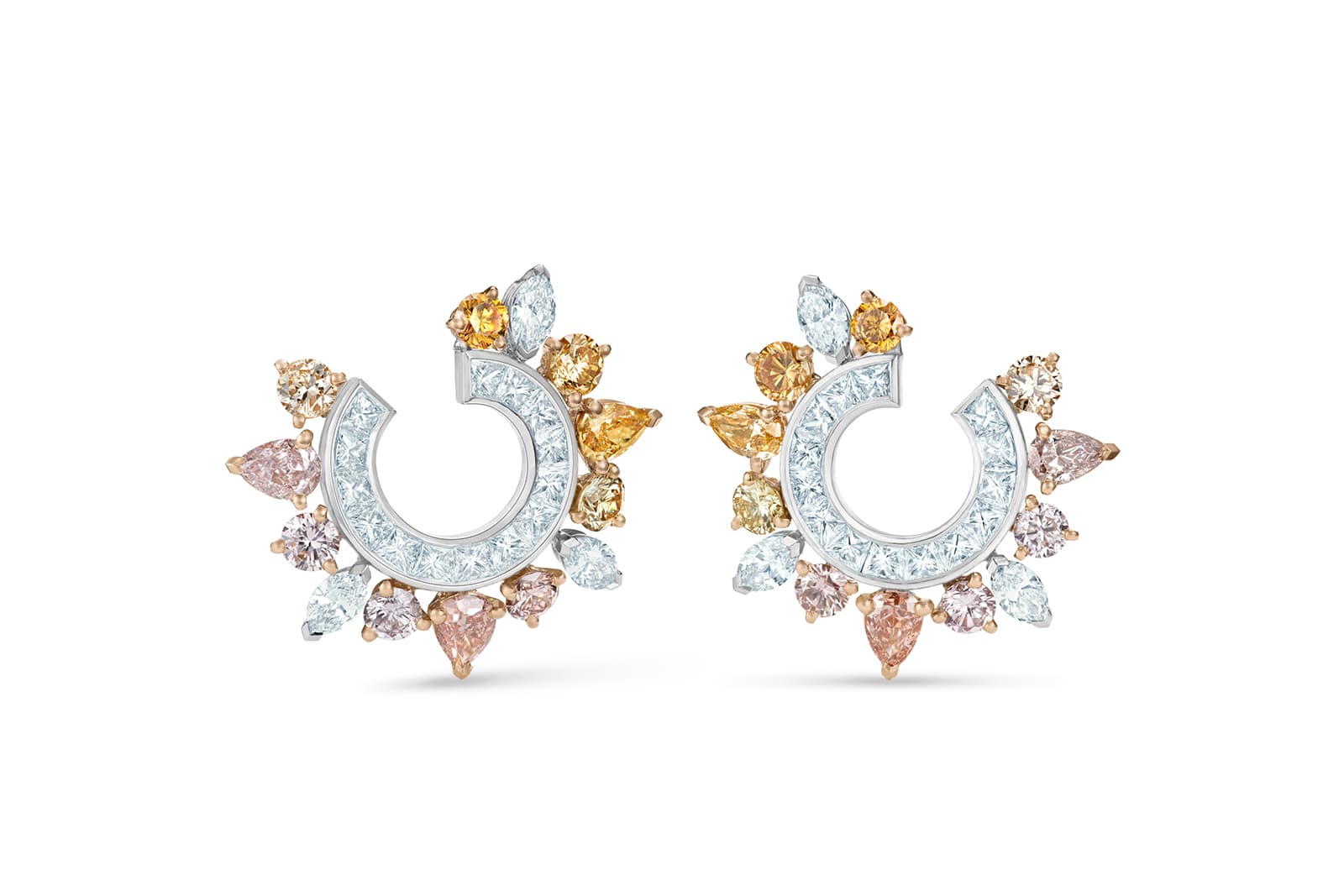 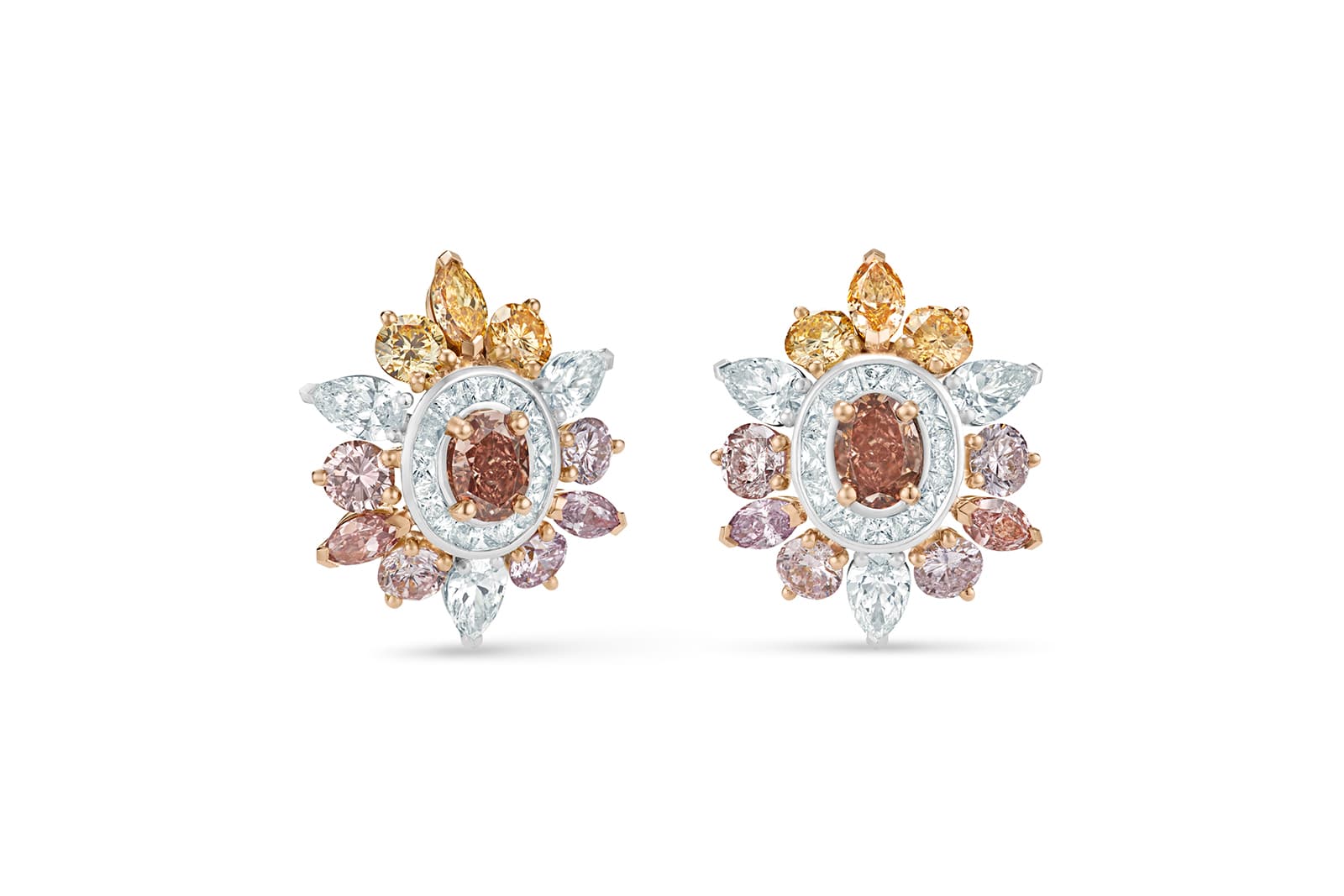 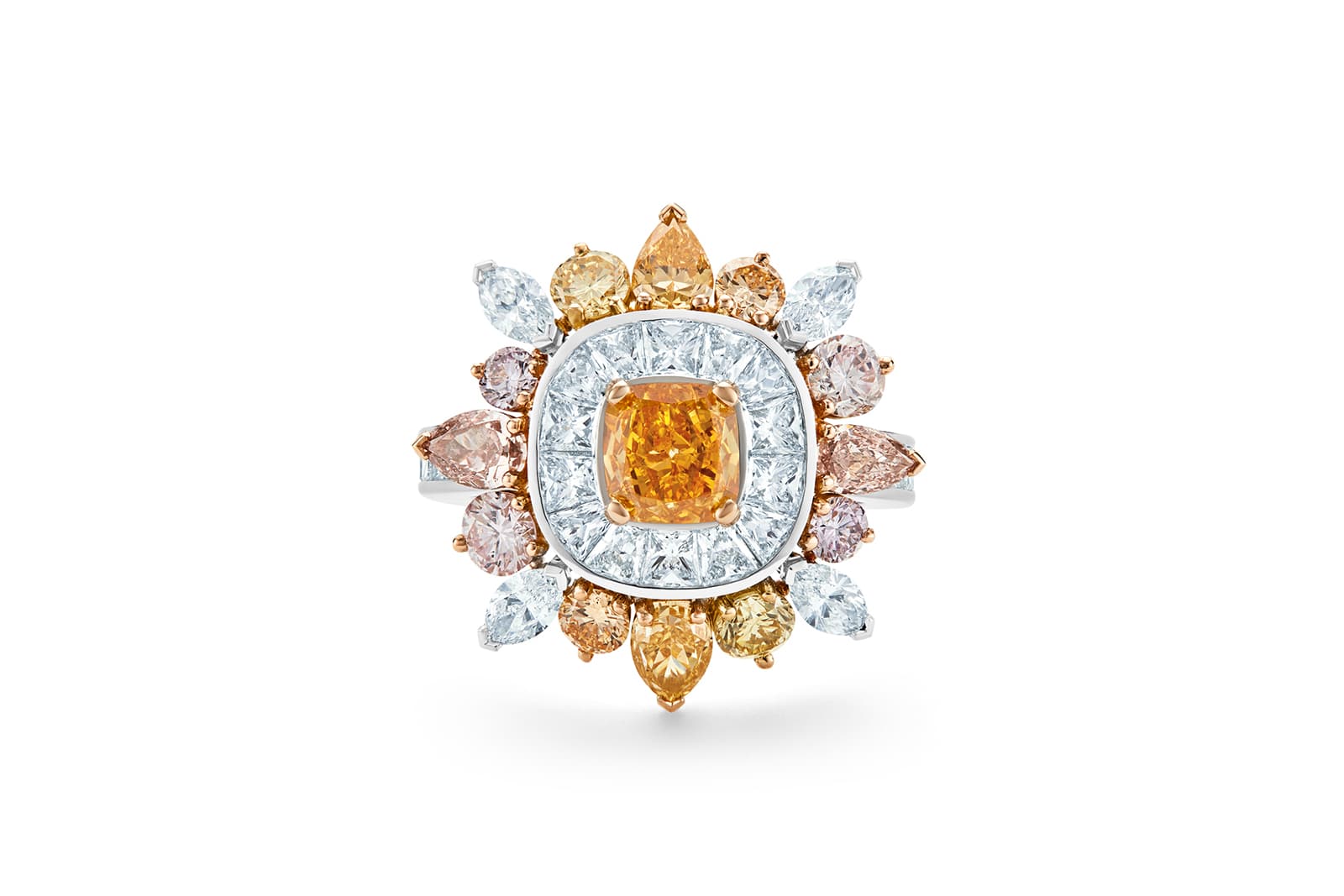 The Motlatse Marvel set, whose key motif is the play of light in the high peaks and subtropical flora of the Motlatse Canyon in South Africa, is replete with carefully cut baguette diamonds, placed in smooth rows that represent the hardness of the canyon’s stones. They are paired with softer, more feminine cushion, diamond, marquise and pear cut diamonds that convey the glow of sunlight at dawn and at dusk. 158 red, brown, orange, pink and yellow diamonds weighing a total of 26.98 carats serve to paint the colourful picture of the Motlatse Marvel bracelet. 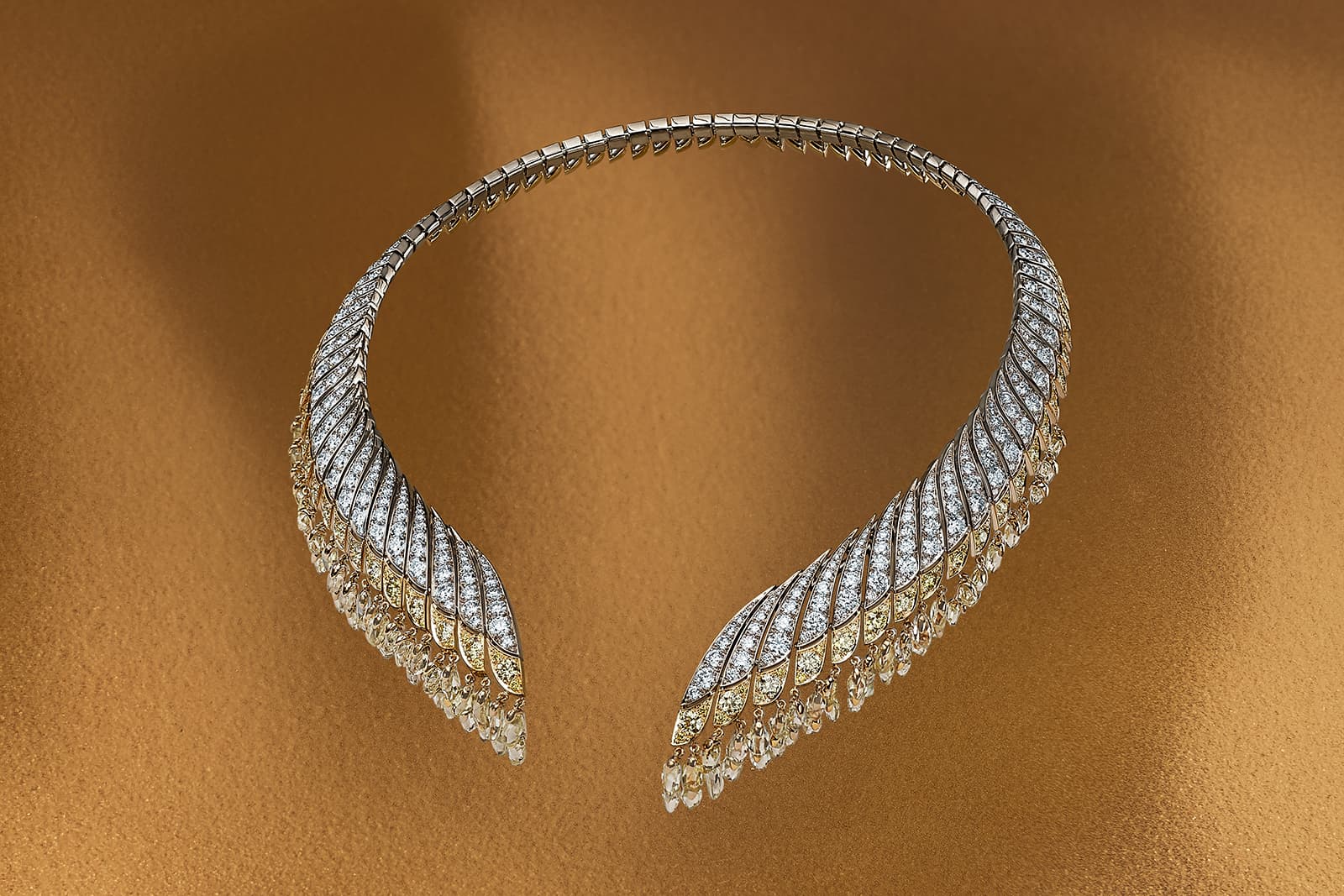 The name Namib Wonder was given to a set dedicated to the oldest desert on the planet. Its characteristic ochre-red wavy dunes, glowing from the intense heat, are conveyed through pavé by colourless and yellow diamonds set in gold of a corresponding colour, as well as magic and mystery through untreated stones of the same colours. A new technique was adopted to create this set: a fringe of rough cut diamonds bordering the bottom of the bracelet and necklace. Incidentally, developing the perfect fit for the choker around the neck was a real challenge for Grace and the De Beers jewellers as they had to consider all the curves of the human body, which had to be replicated by the metal. They managed to find a balance between design and form however, making the Namib Wonder necklace comfortable to wear. 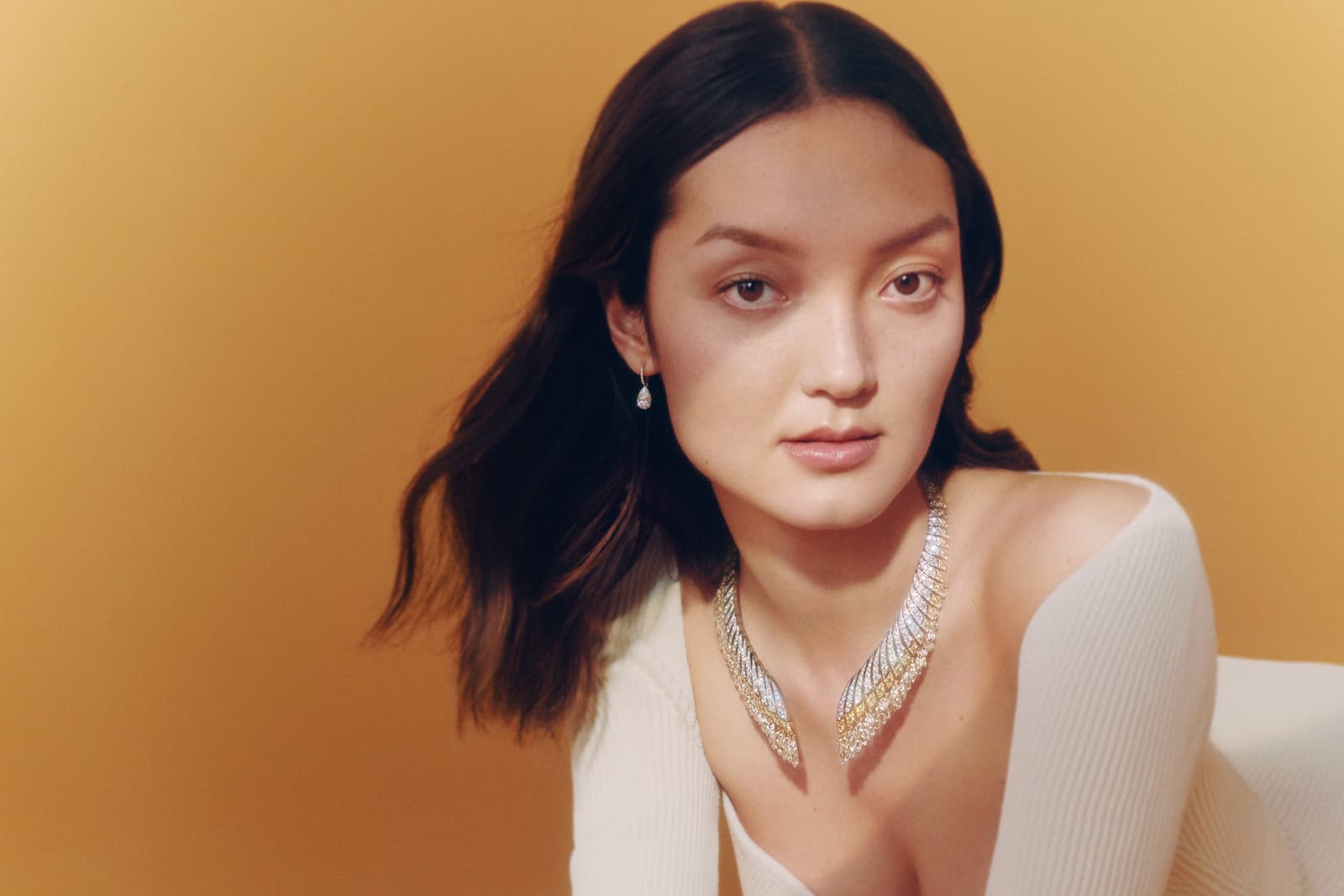 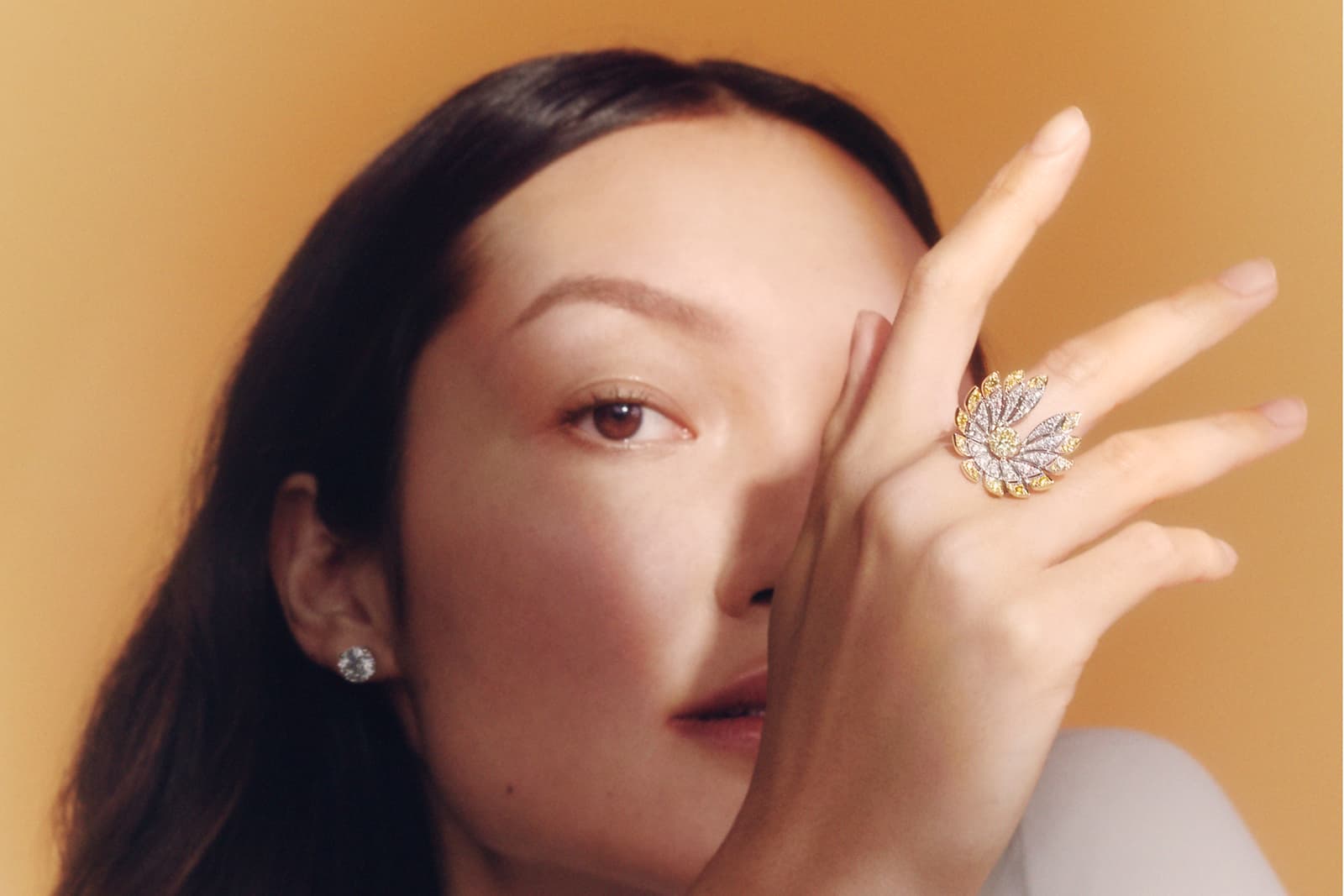 The colourful corals and fish of Landers Reef are also featured in the De Beers Travel Guide to Africa, embodied in the company’s Landers Radiance jewellery. The maximum number of combinations of cuts and colours represents the reef’s myriad of fish and the vibrant, living world of the depths. The highly elaborate De Beers Spectacle Setting technique has been used in the design of the line’s necklace and bracelet, ensuring that they look spectacular from every angle. Rough diamonds are positioned around the perimeter with a thin strip of gold to ensure maximum penetration of light into the stone. Note that each diamond required an individual setting that matched its shape, significantly increasing the amount of time spent on creating a piece. In addition to the unique setting, the highlight of the Landers Radiance necklace is its versatility: it can be worn as a medium-length necklace and choker, with a pendant either on a three-tiered necklace or on a velvet ribbon. If desired, the pendant can be completely unfastened. 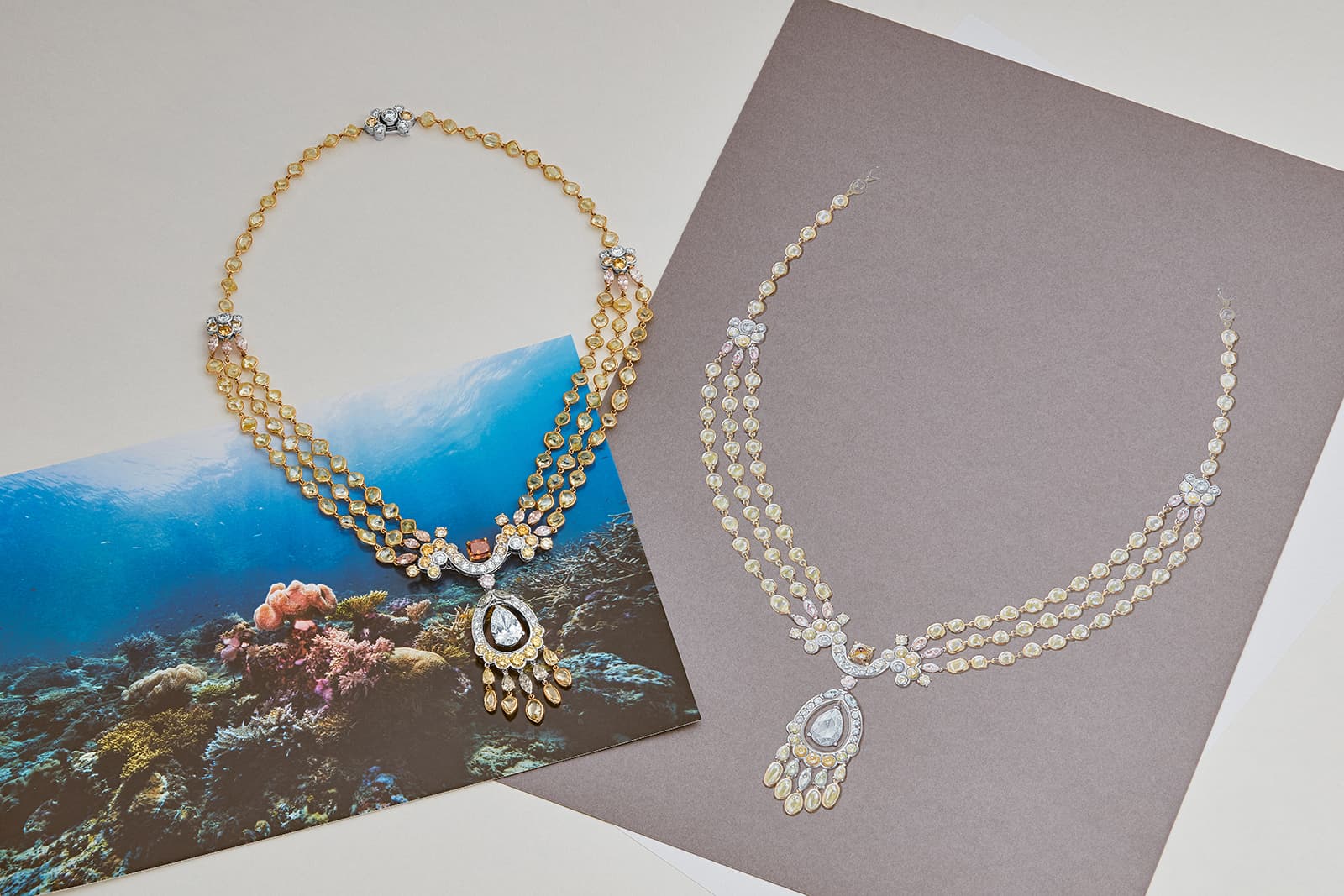 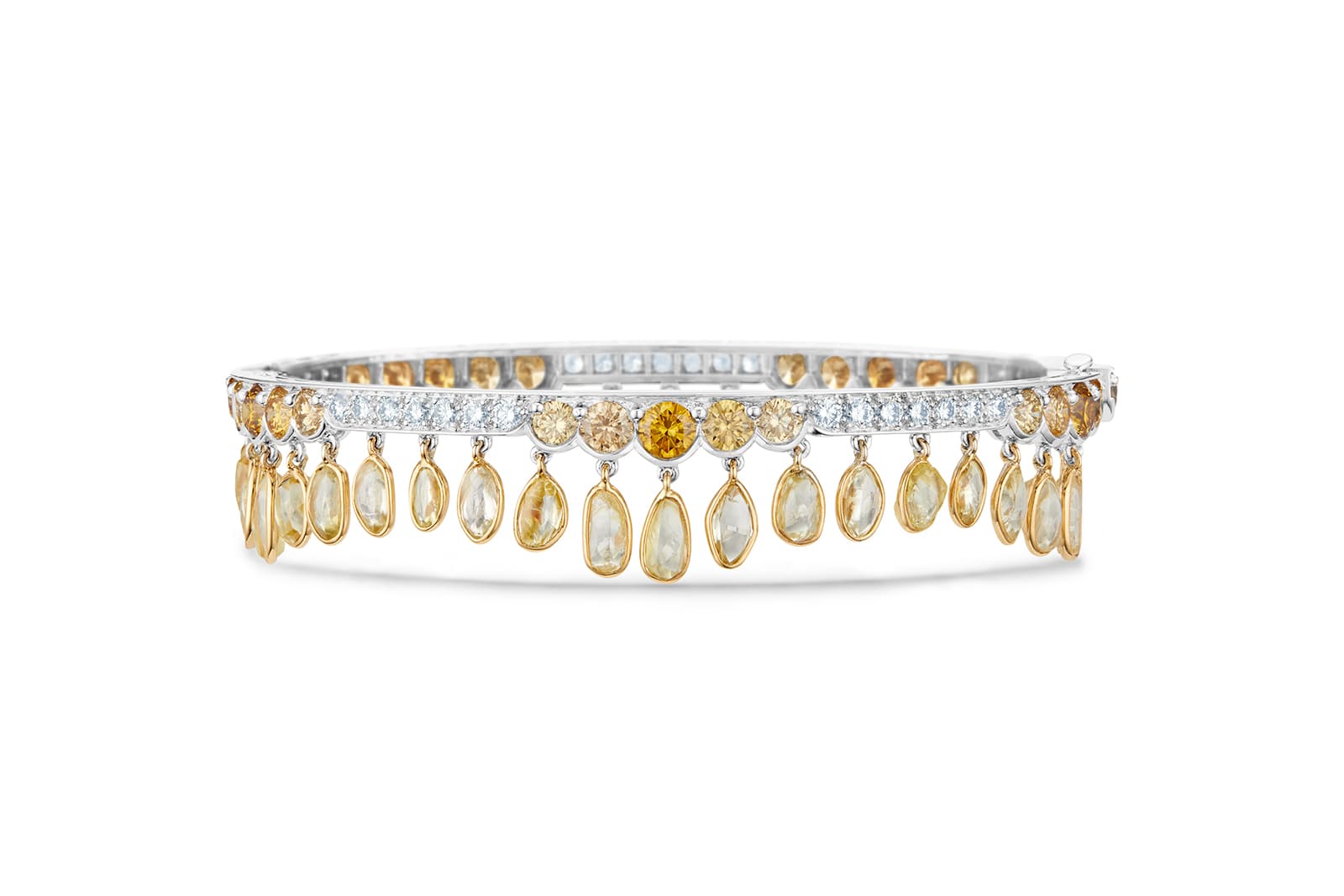 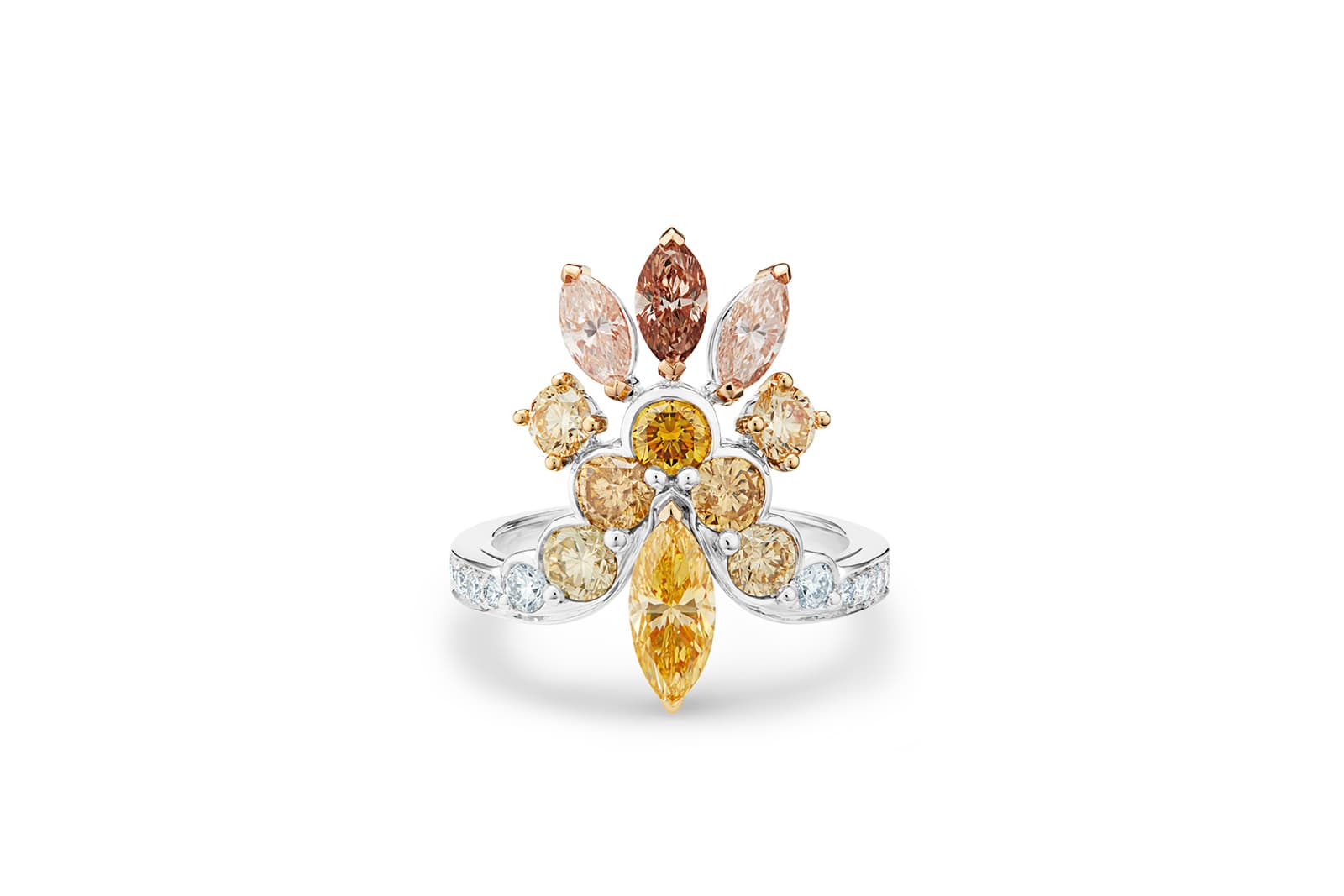 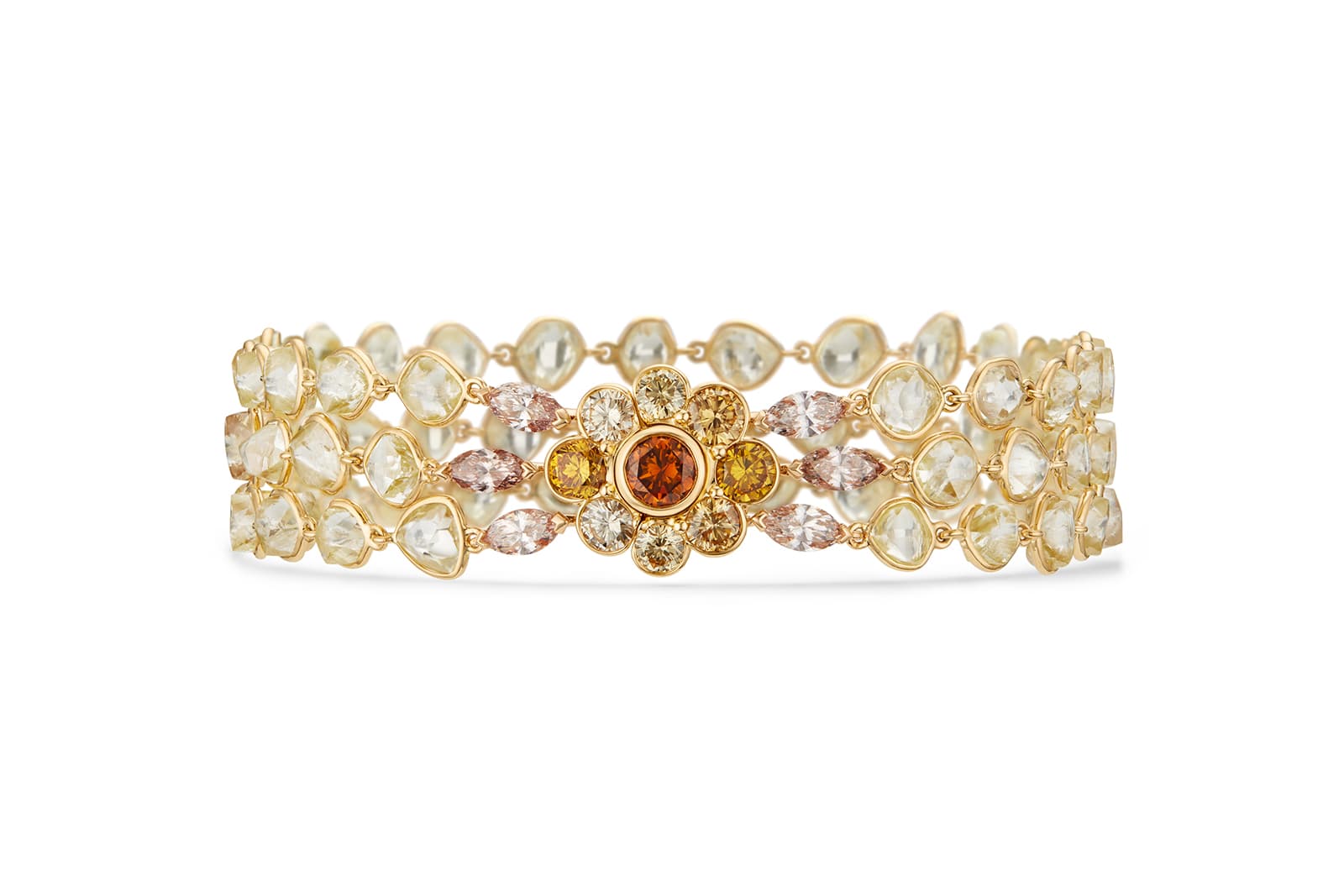 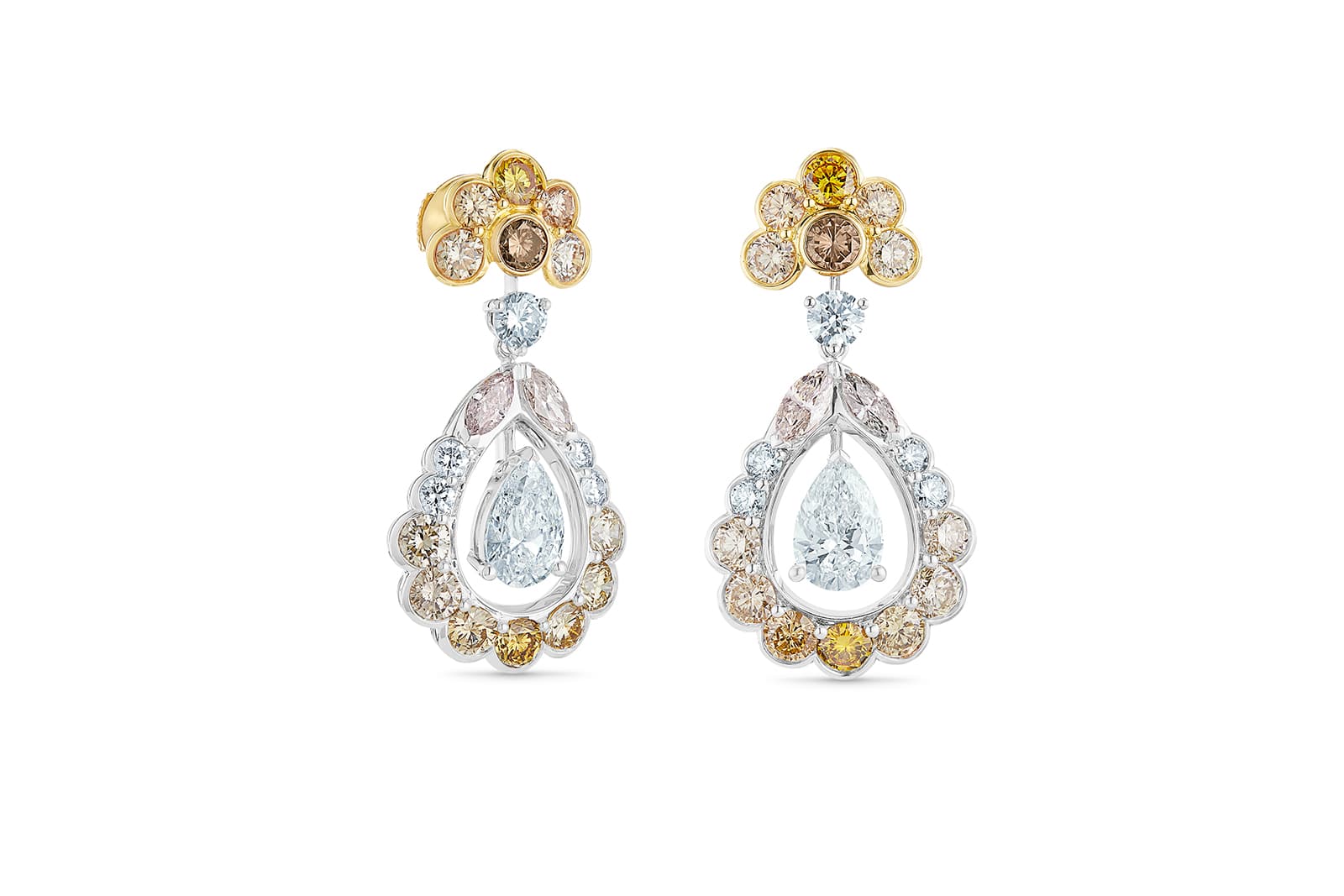 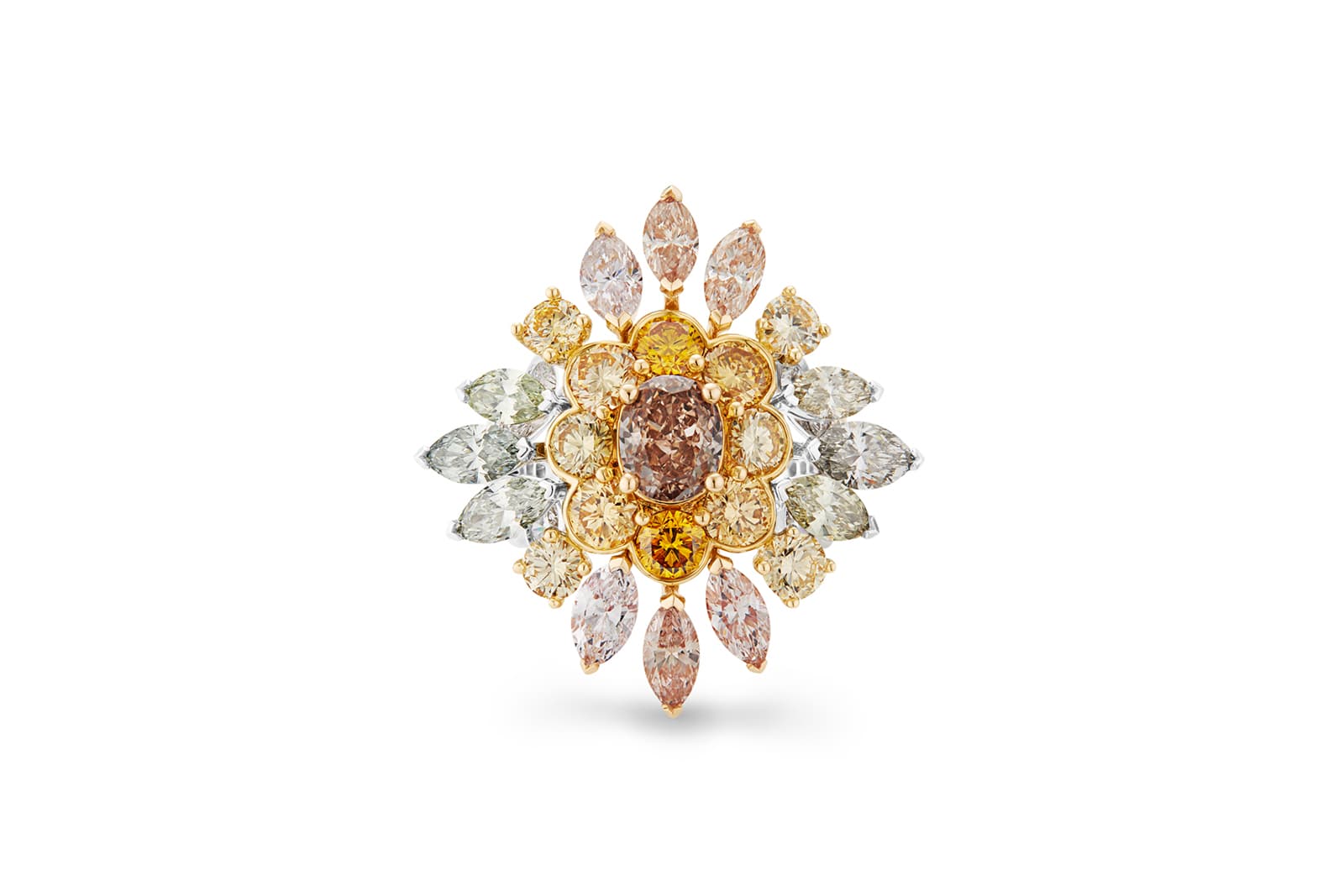 Ellesmere Treasure, a symmetrical set with a snowflake pattern, is inspired by the untouched wilderness... on Canada’s northernmost island of Ellesmere! To make these jewels, only colourless diamonds of extraordinary clarity were used, ones which had been exclusively selected by hand to convey the clarity of ice. The striking Ellesmere Treasure necklace has echoes of frosty Arctic flora and is encrusted with 932 diamonds, the central one of which weighs 2.18 carats. At De Beers, Ellesmere Treasure has been called a portrait of glacial glamor, an entirely apt and well-deserved name. 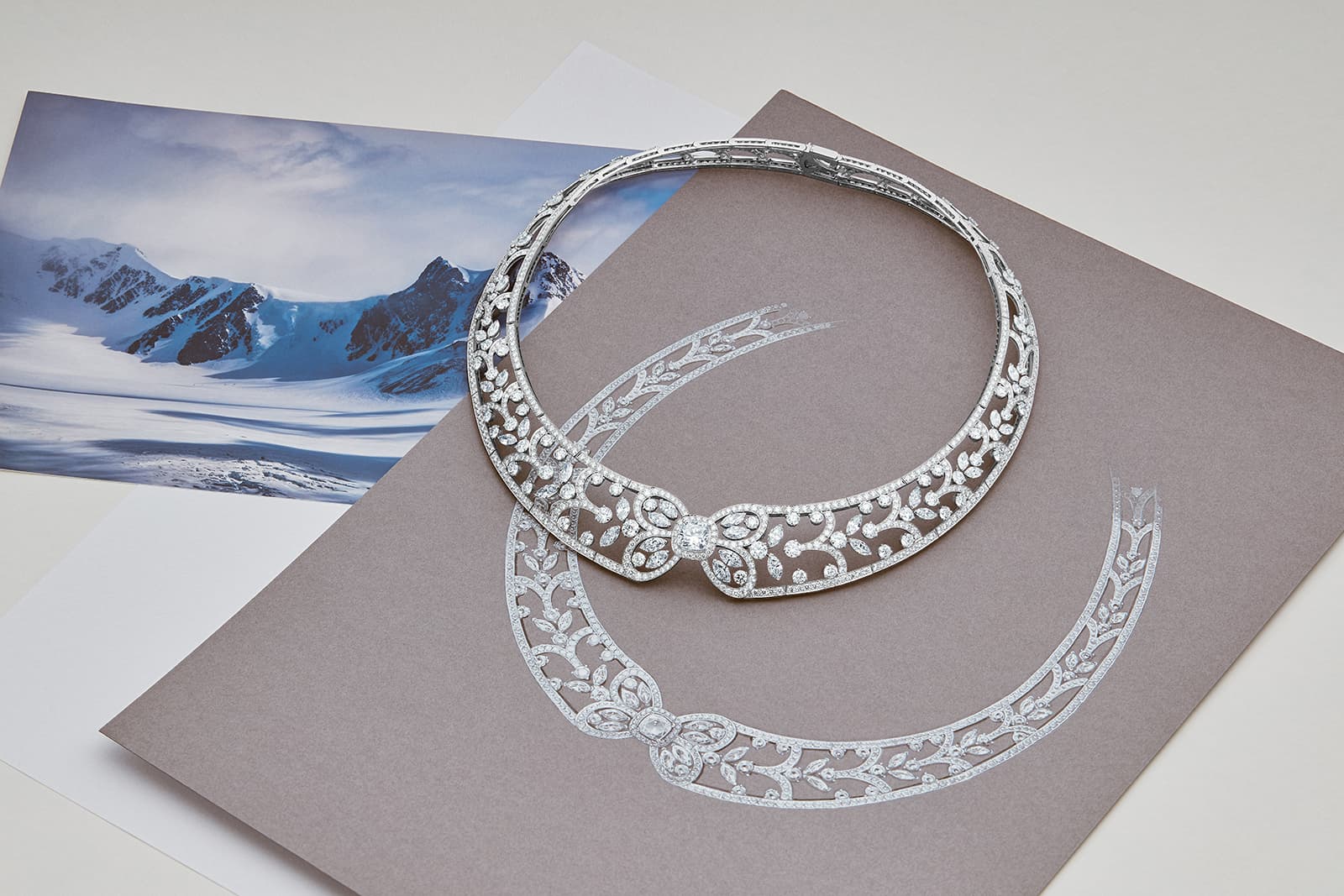 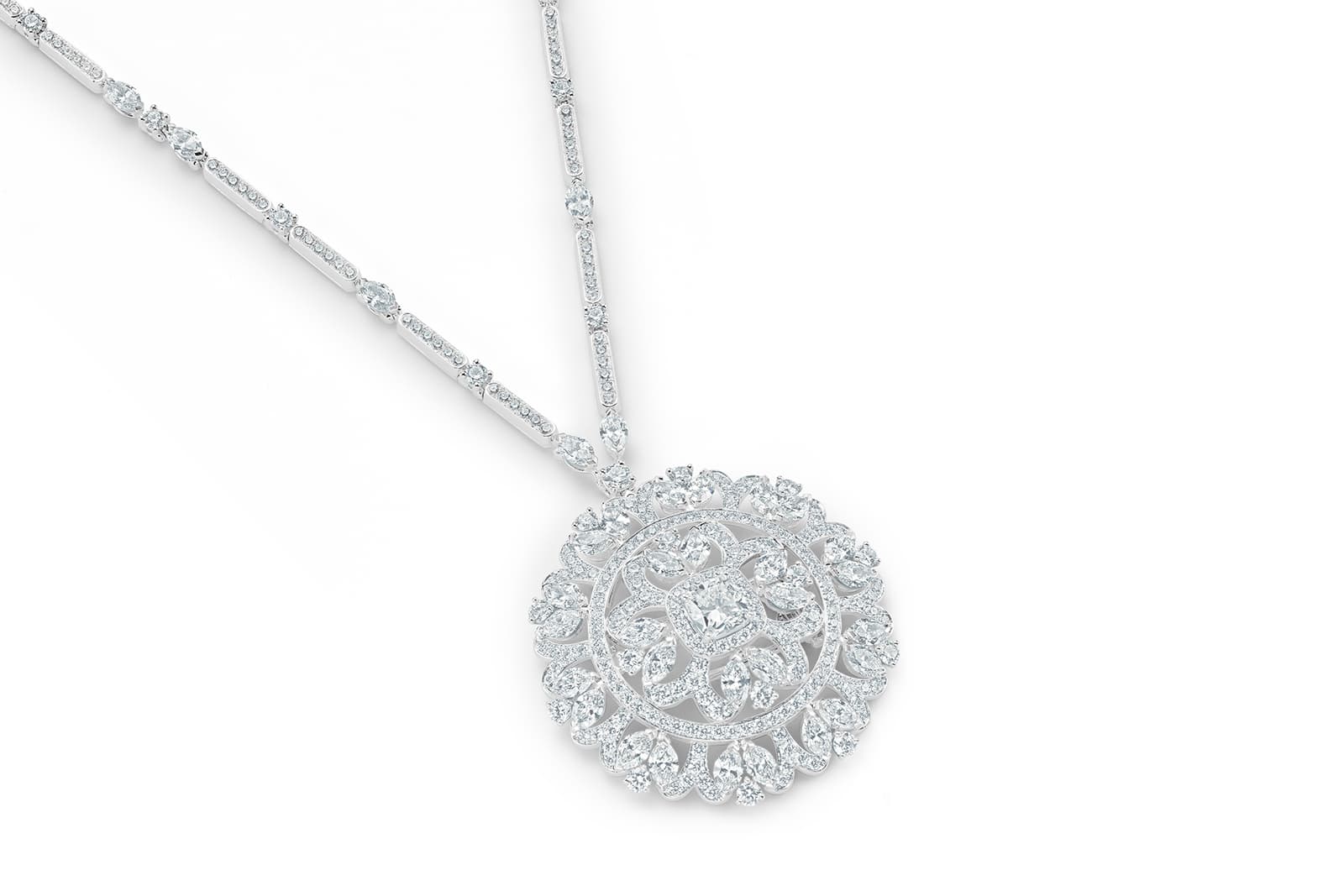 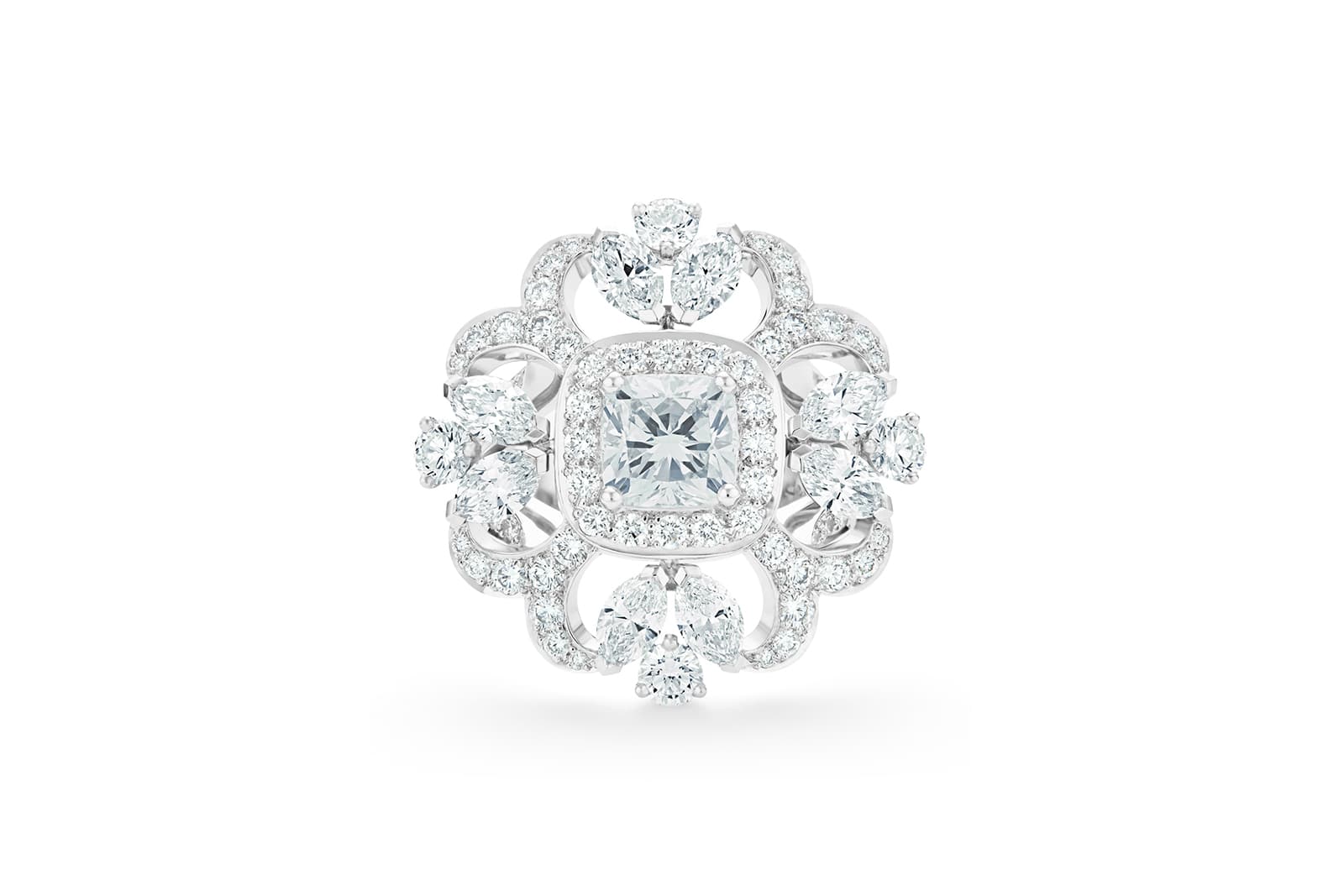 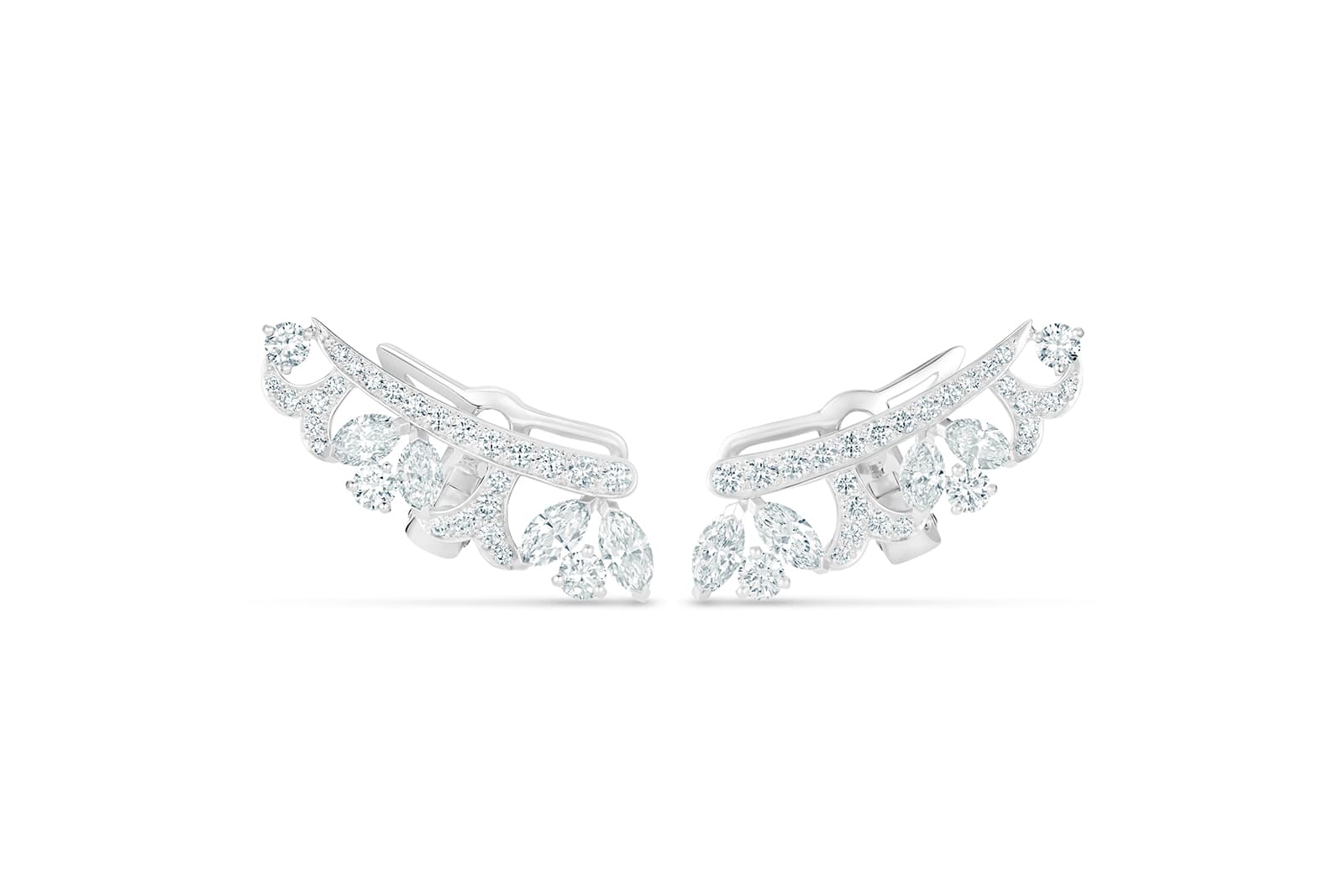 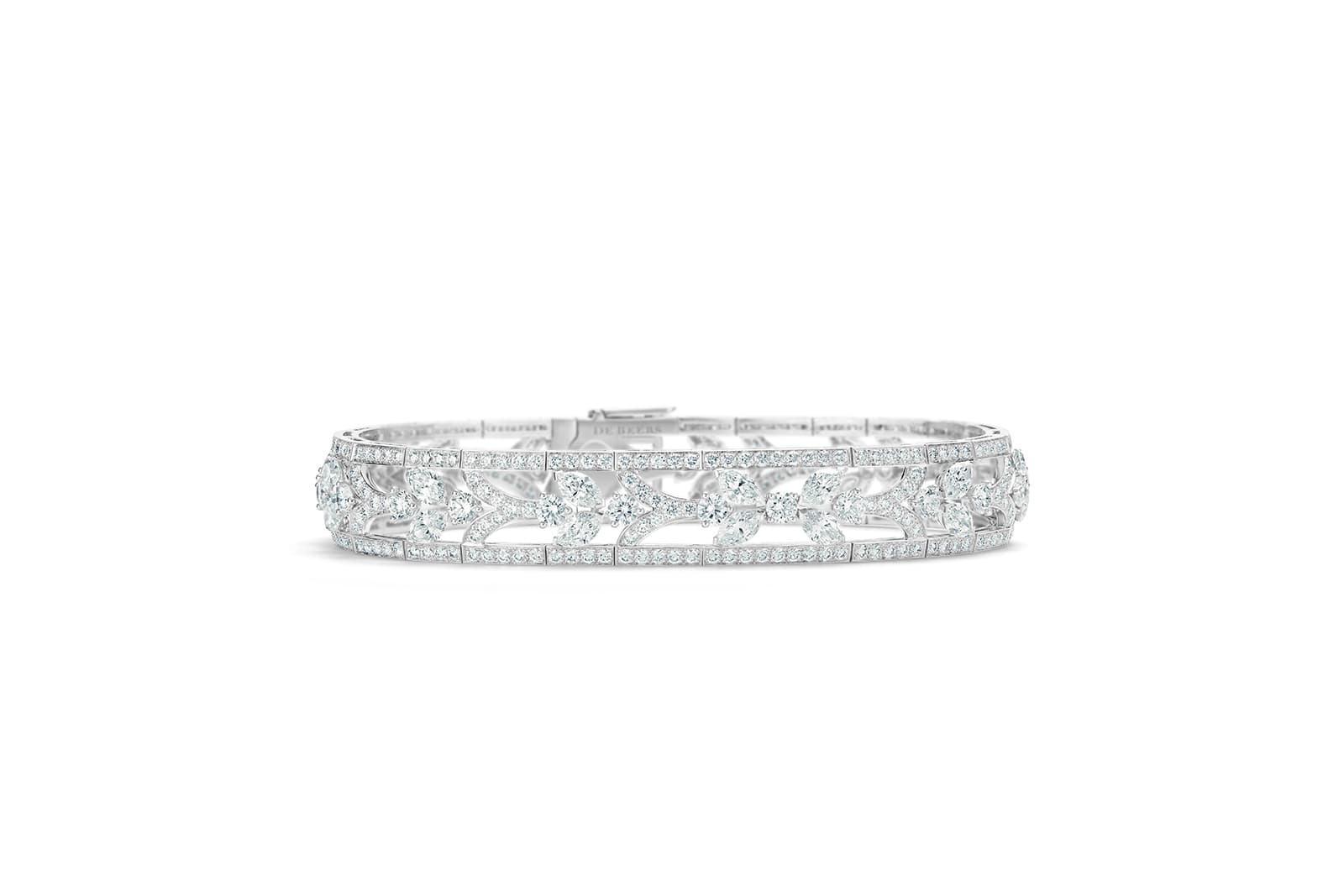 How did Canadian snow end up in amongst those African landscapes? The answer is simple: the majority of De Beers diamonds are mined not only in Botswana, Namibia and South Africa, but also in Canada! The brand knows the origins of its diamonds and can ensure that the diamonds have made a positive impact at every stage of their incredible journey.