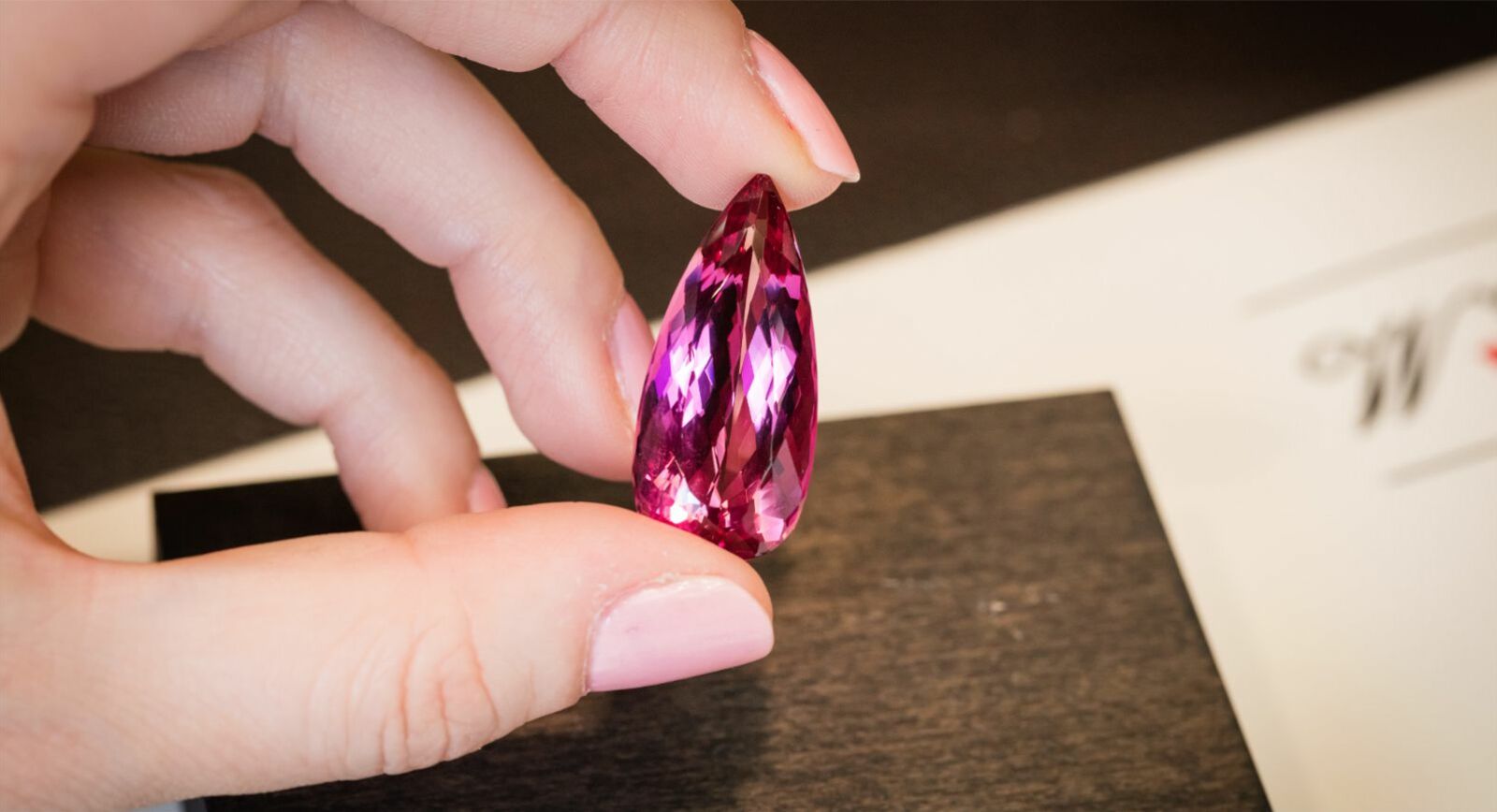 “When I was a child, I asked my father what his favourite gemstone was. He answered without hesitation: 'imperial topaz'. I first visited Brazil at 22 years old and saw the gem with my own eyes, and that’s when I understood why my father was so enchanted by it. I have been collecting imperial topaz ever since,” says Constantin Wild.

At the mention of topaz, most people think of a cheap dark blue stone that occurs in mass-produced jewellery. Very few people think of the unbelievably valuable collector’s variety of this stone, not to mention the exceptional beauty of the imperial topaz. When Constantin first bought several specimens from Brazil in the 1980s, this stunning mineral was only known to a small circle of people.

“For a long time, the noble topaz was only for connoisseurs. In recent years, this valued gem has enjoyed a renaissance, the most beautiful variety of which, the Brazilian imperial topaz, has become extremely rare,” explains Constantin, one of the most well-respected precious stone dealers and gem cutters in the world. 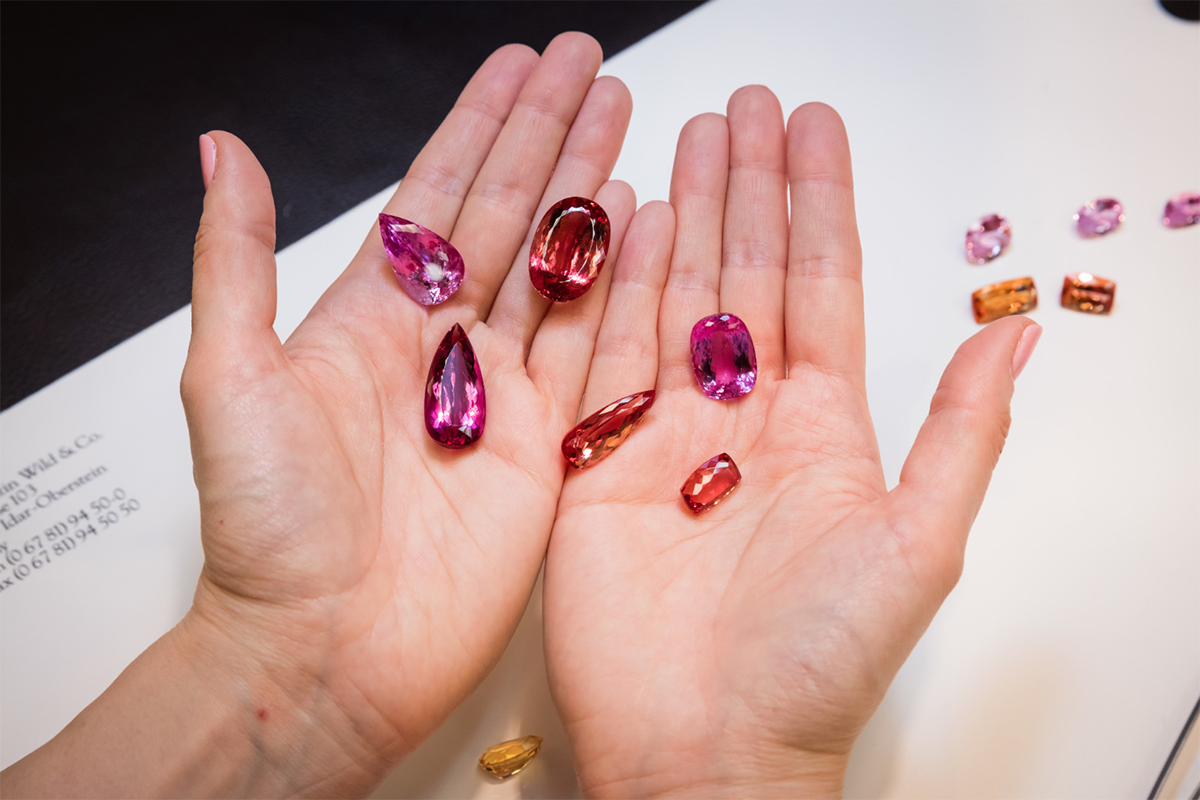 I have already written an article on the unique characteristics of the orange and pink toned gemstone – here I want to explore its investment value, with the help of Constantin’s knowledge as a foremost expert in this field. I visited him during Baselworld in search of unique jewels, and was enchanted by both his selection of imperial topaz, and his deep affection of this gemstone. The gem cutter always brings rare collector’s stones with him to the trade show, some of which are displayed within his exhibit space, whilst others are held aside exclusively for distinguished clients.

Just as I had once supposed, Constantin Wild had also thought that he could buy the best aquamarines, emeralds and tourmalines directly from mine owners whenever he wished, but quickly understood that the salesmen are able to choose their clients when it comes to rare stones. Thus, his amazing Imperial topaz collection of more than a dozen rare pieces is not accessible to everyone. 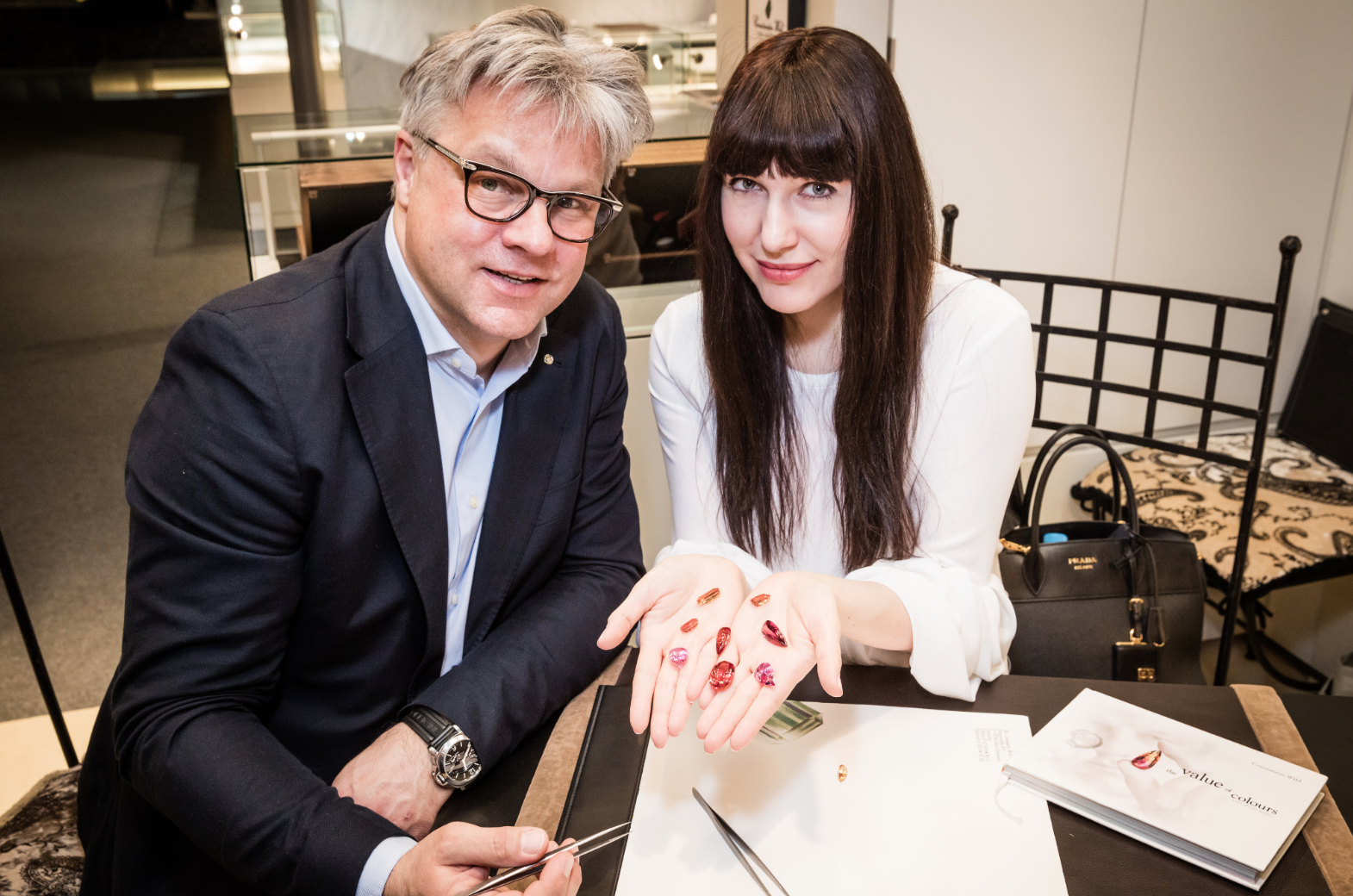 Constantin introduced me to his collection and began to show me the stones one by one. One was pear cut with a deep pink colour and weighed over 30 carats, another was more orange cushion cut gem and weighed over 34 carats, and the third was more modest at 15 carats. Another glorious peach coloured topaz was oval cut, but the one I found most striking was the bicolour imperial topaz weighing 20 carats that delicately oscillated between pink and golden orange hues.

As it turns out, the price of imperial topaz from Brazil can vary several hundred-fold, and therefore the price tag of any one stone is primarily dependant on very specific colour disparities: the deeper and more vivid it is, the higher the value. “As an example, the lightest varieties cost $450 - $800 per carat, while the ones that boast the deepest colour could go up to $15,000 - $25,000 per carat! Out of the whole orange, peach, pink palette, imperial topaz with both pink and gold hues is considered the most valuable.” 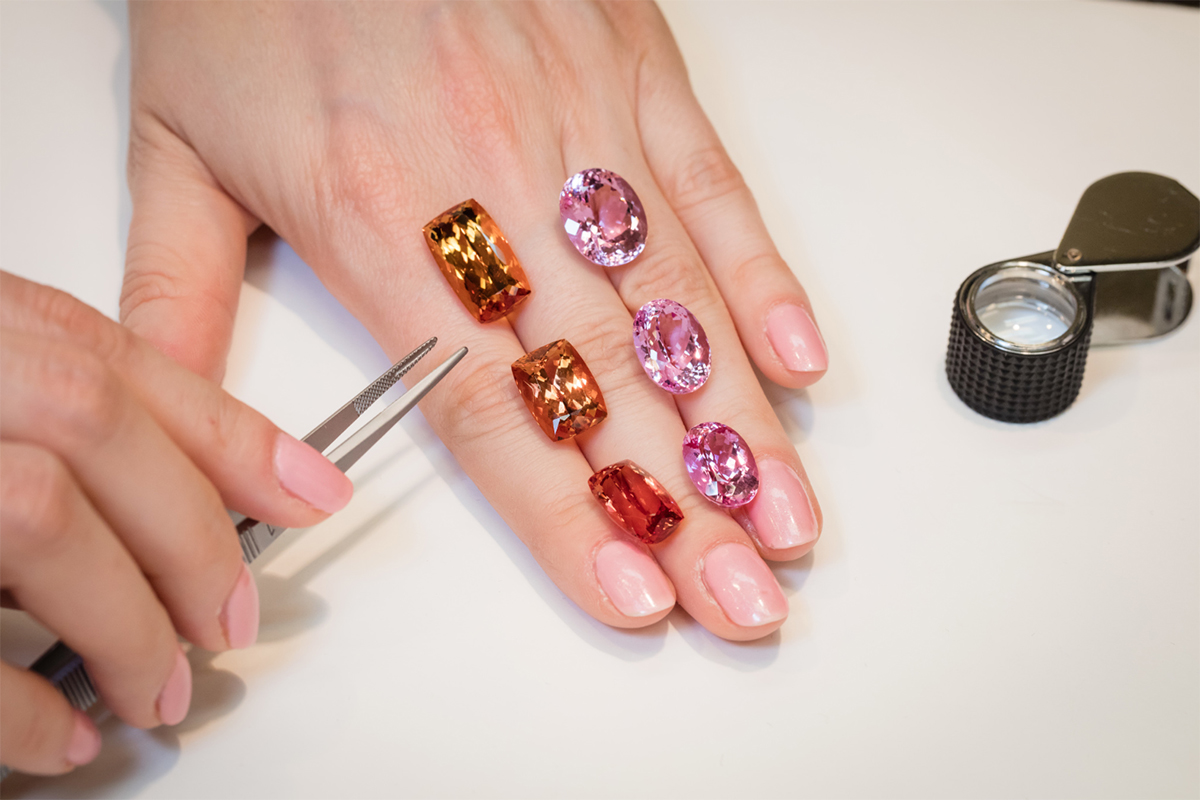 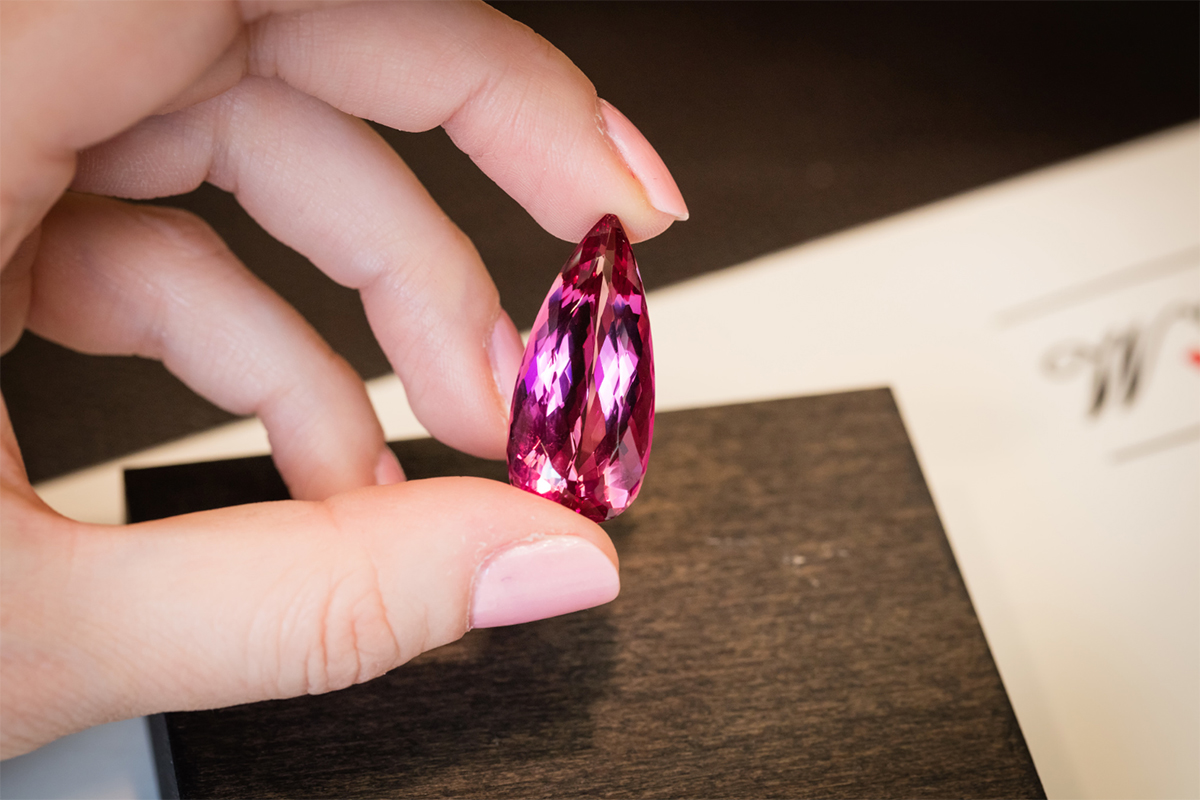 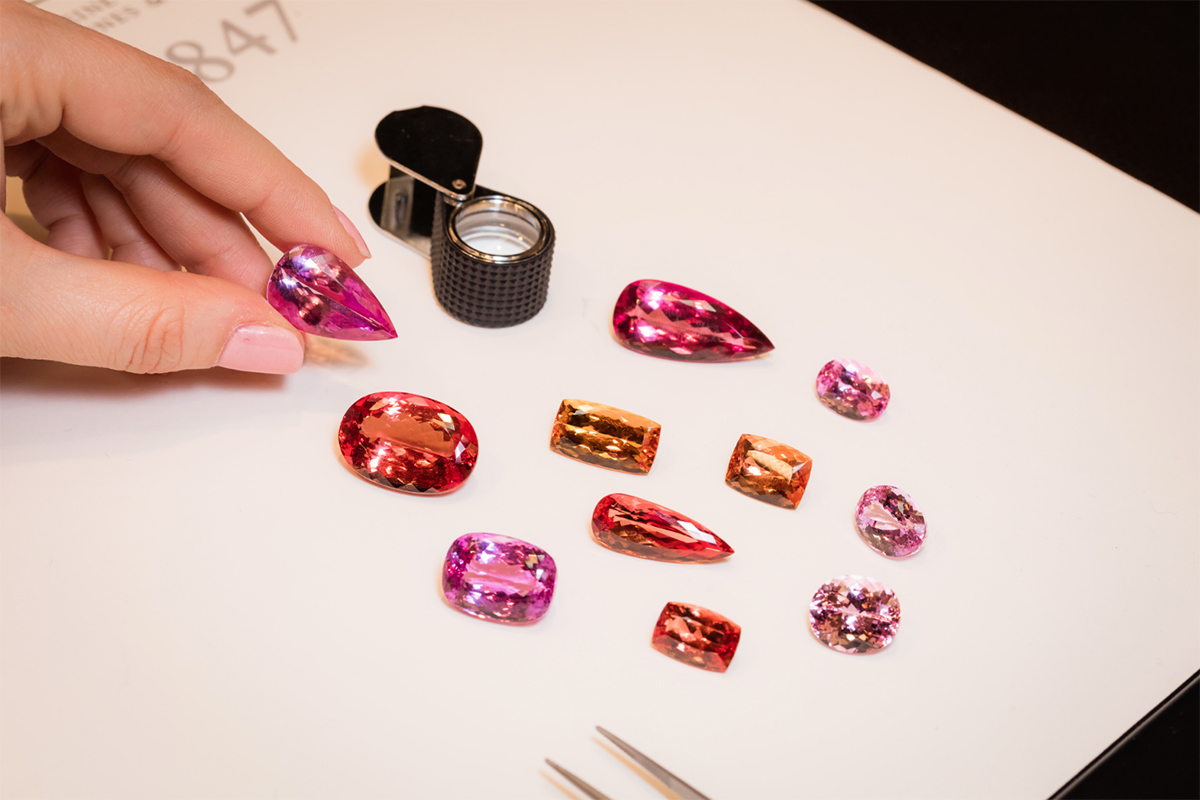 After hearing these words, I wondered whether it was possible to heat a light-coloured stone to get a deeper more valuable colour, as in the case of sapphires. It seems this trick doesn’t work; “unlike colourless topaz, the colour of the imperial variety cannot be drastically altered by heat or irradiation. You can’t make a stone’s colour more intense by heating an Imperial topaz, but you can change the hue. For example, the orangey pink varieties will turn pink, but many specimens will not change at all,” replies Constantin. Now I understand why a deep orange stone is very close in price to an intensely pink one: to get the valuable pink hue, a deep orange topaz (not a pale orange one) has to be heated to roughly 300 degrees.

Finally, Constantin Wild showed me something utterly exceptional: a family jewel. “I want to show you this stone that once belonged to Marie Antoinette - the daughter of the Austrian empress Maria Theresa - a pink topaz from 1700. My father discovered this ring at an auction in Paris in the 1950s and purchased it to later re-cut it in the 1960s as a gift to my mother,” explains the cutter. 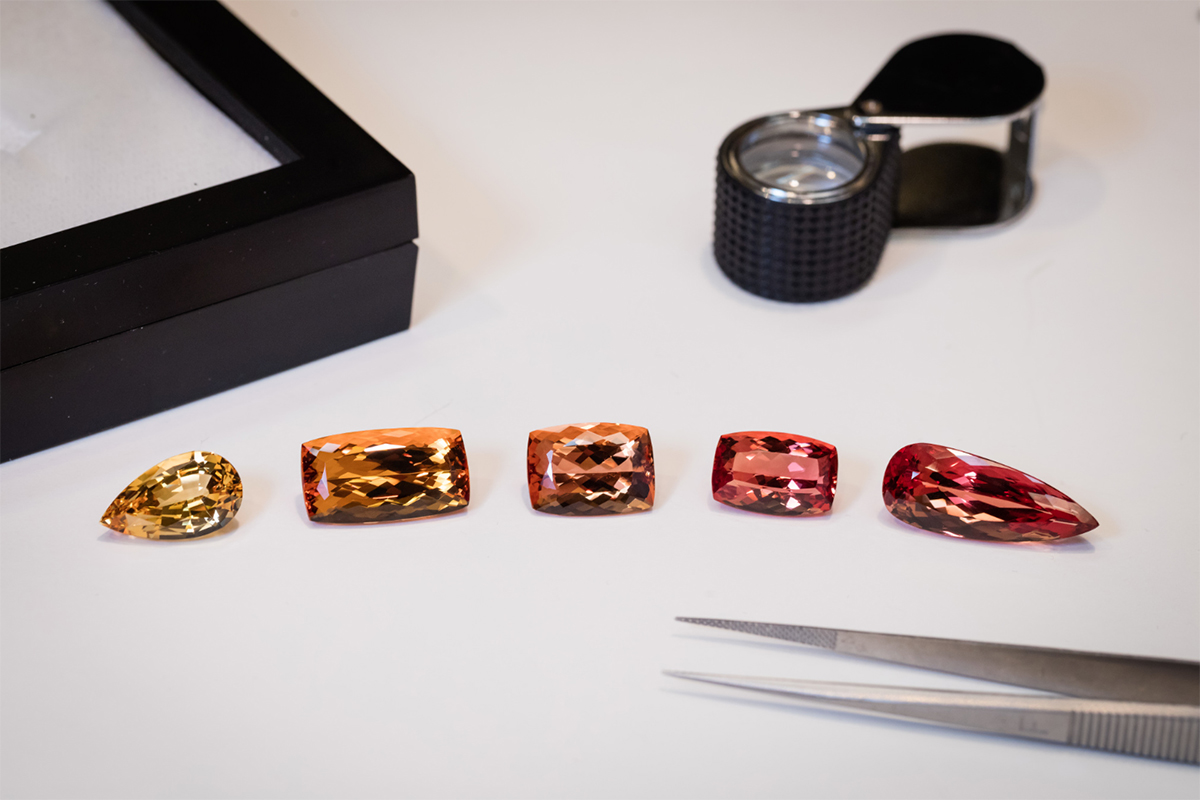 This intensely pink oval cut topaz weighs over 18 carats, and the combination of its sentimental value and provenance meant that this historic gemstone was the icing on the cake of my delightful and elucidating visit to Mr. Wild and his Imperial topaz collection.