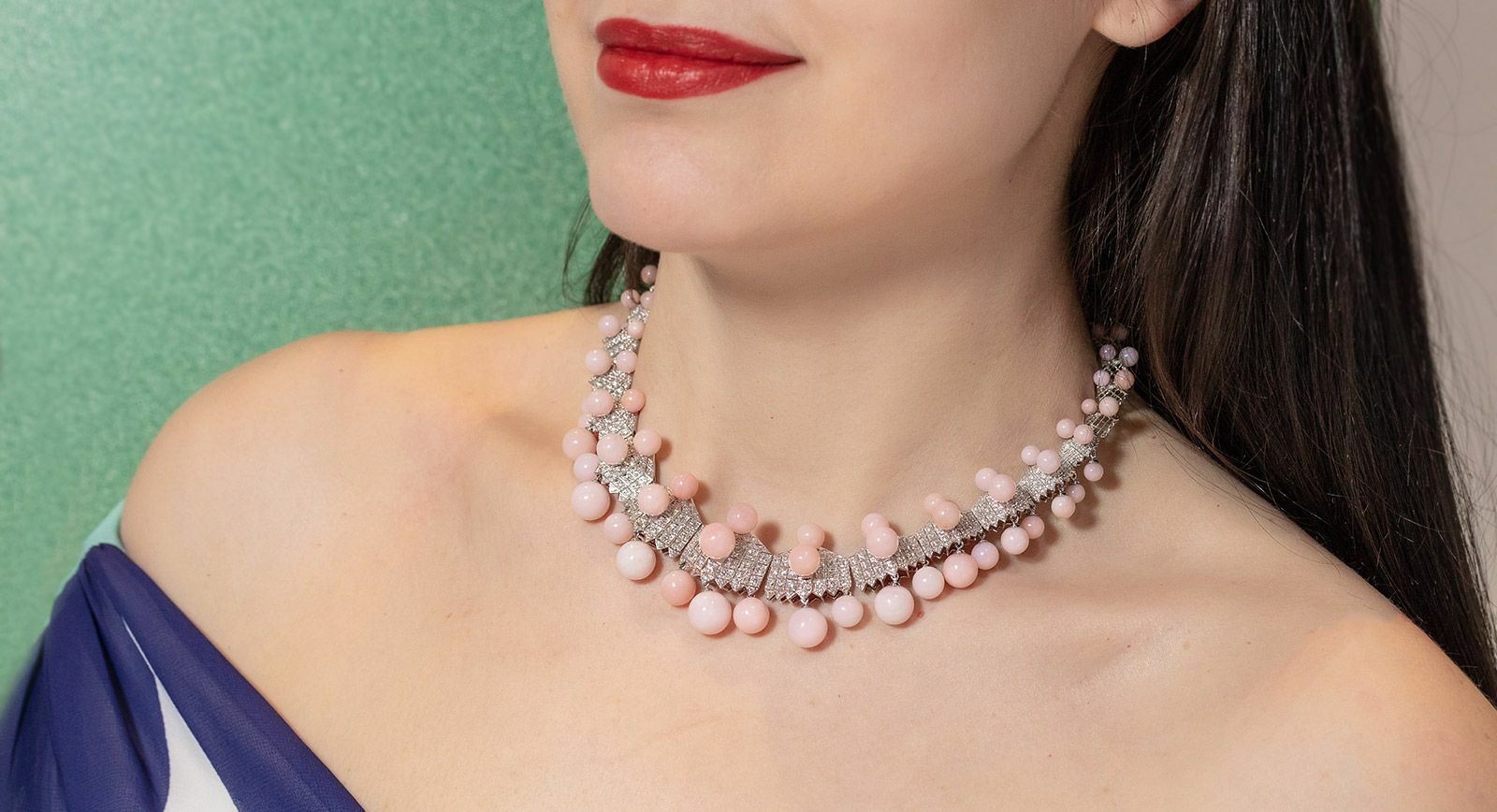 Unusual Opals: These Ornamental Stones are Anything but Ordinary

I am always slightly envious of October babies because they have the beautiful opal as their birthstone. The play of colour within has always fascinated me and, as I have got to know precious opals better, I have become ever-more entranced by these rainbow gems. If you have ever spent time in the company of a wonderful Australian black opal or a particularly fine matrix opal, you wonder how this gem ever earned a reputation for being bad luck. Thankfully, the many superstitions surrounding these colourful ornamental stones have been resigned to history as jewellers explore the whole spectrum of unusual opal gems beyond the ubiquitous white opal.

When Katerina asked me to collect a selection of unusual opal jewels to write about, I already had several designers in my mind who I know go to great lengths to source some of the world’s most unique fine opals. 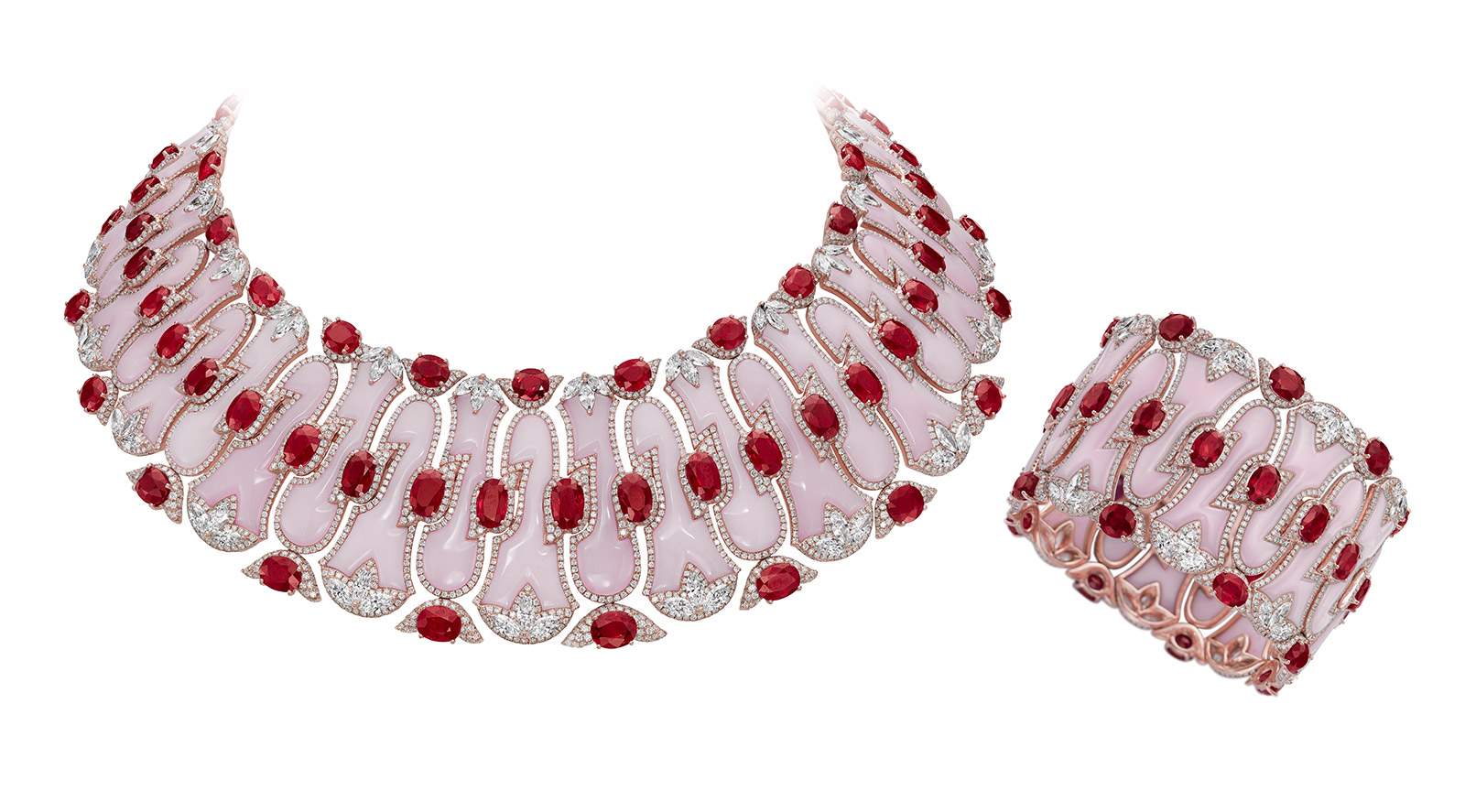 While no two are the same, what all opals share is a similar chemical composition – a combination of silicon dioxide and up to 30% water. Formed of tiny spheres of silica, rather than an arranged crystalline structure, it is the silica that controls the different hues you see within an opal. The chameleon of the gemstone world, precious opals contain every shade of the rainbow and are forever changing colours, depending on the light. Most display a bewitching iridescence known as opalescence, with myriad patterns and colour formations swimming just below the surface. Light diffraction is what causes the beautiful display of colour – known as a play of light – within an opal. When the light hits the silica spheres, it separates into all the colours of the spectrum before bouncing the prismatic colours back to the surface of the opal. 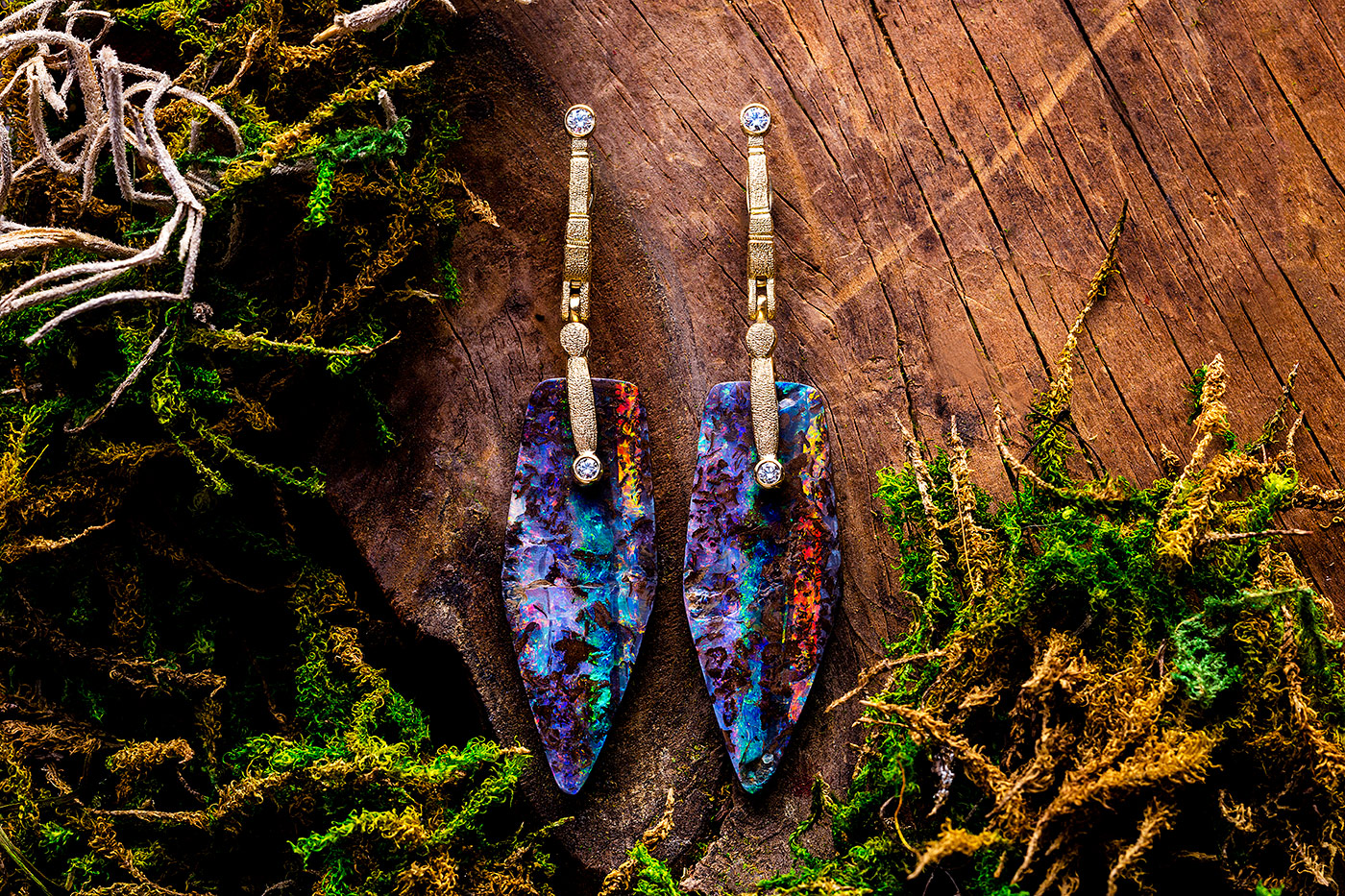 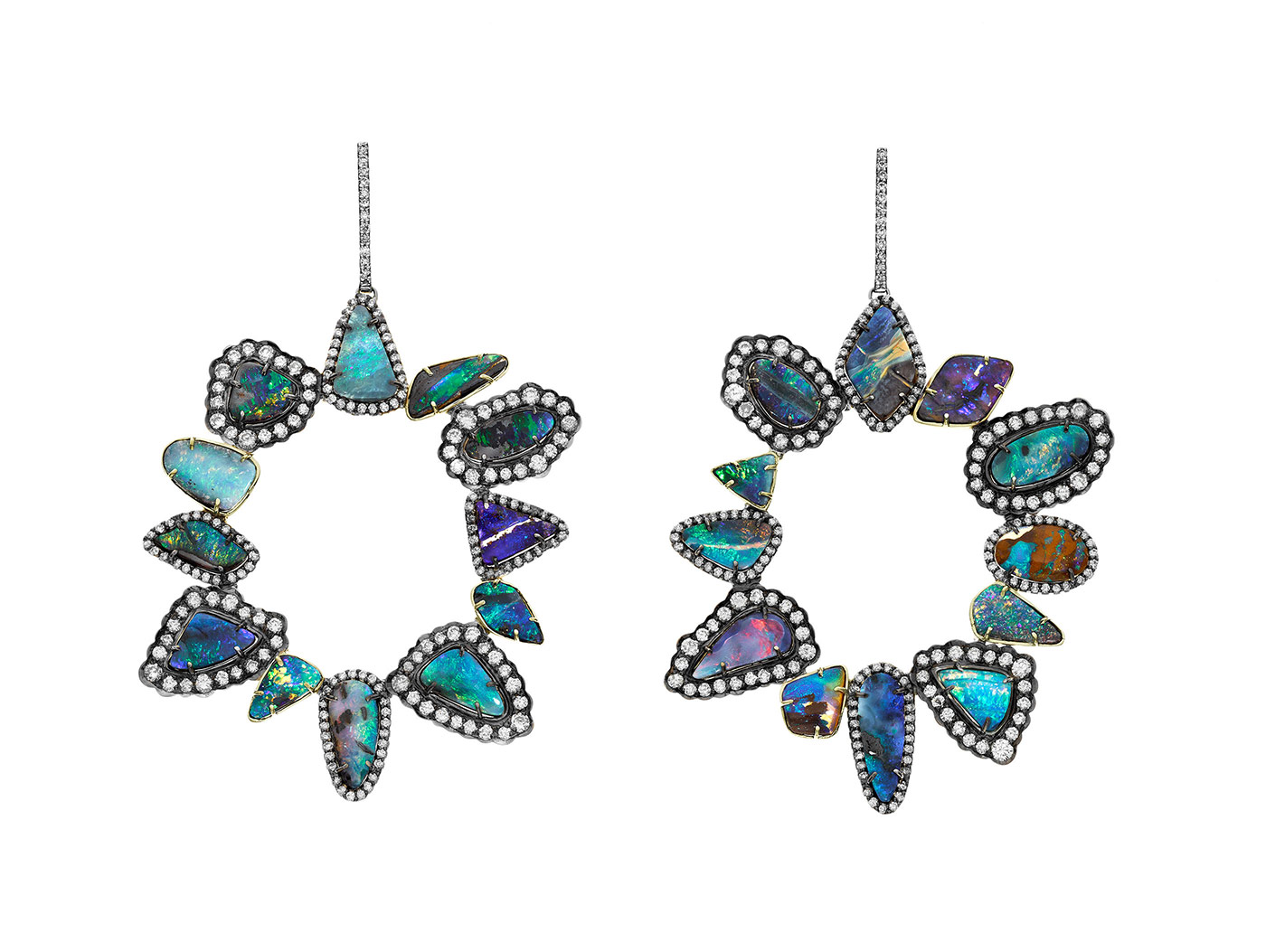 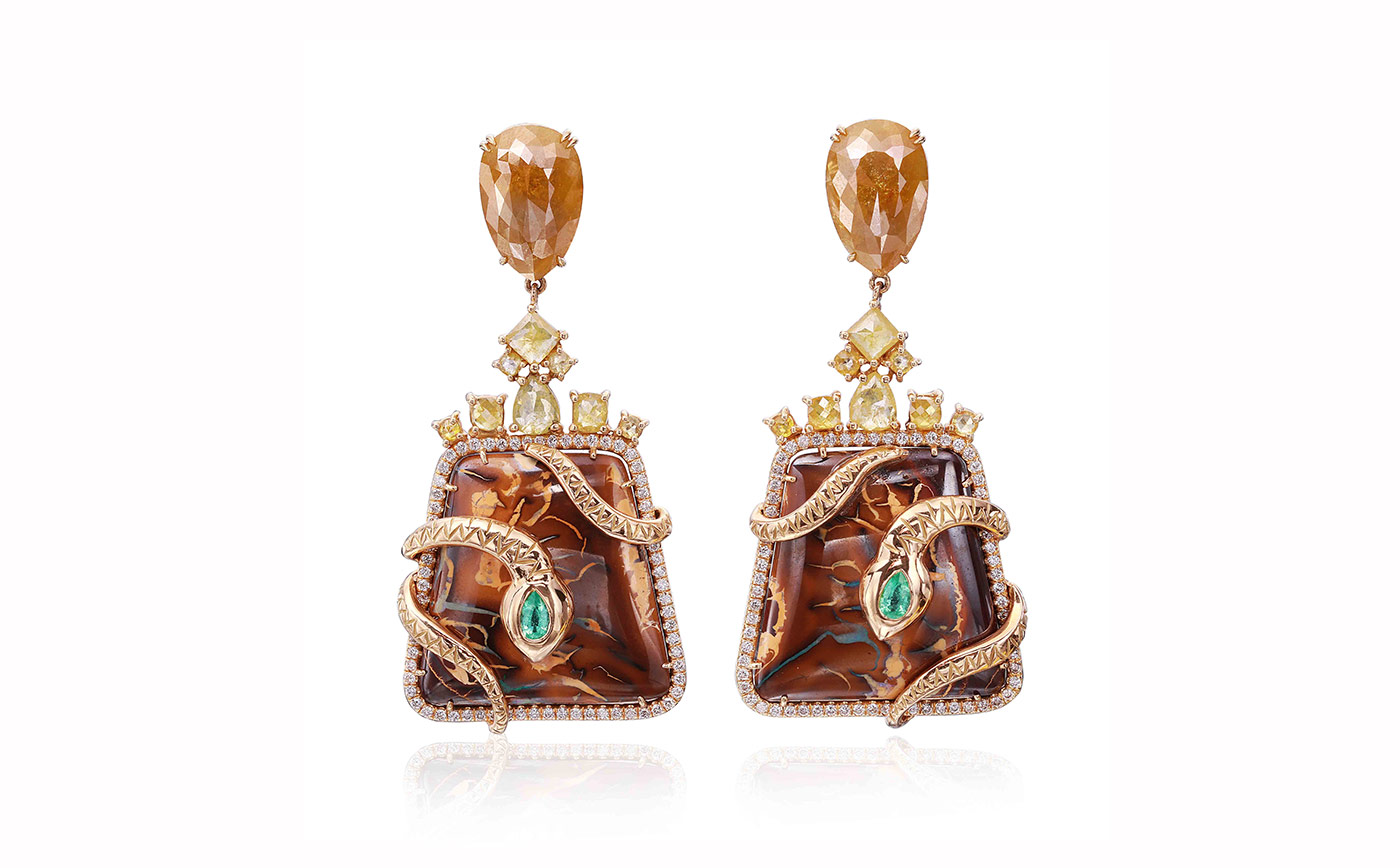 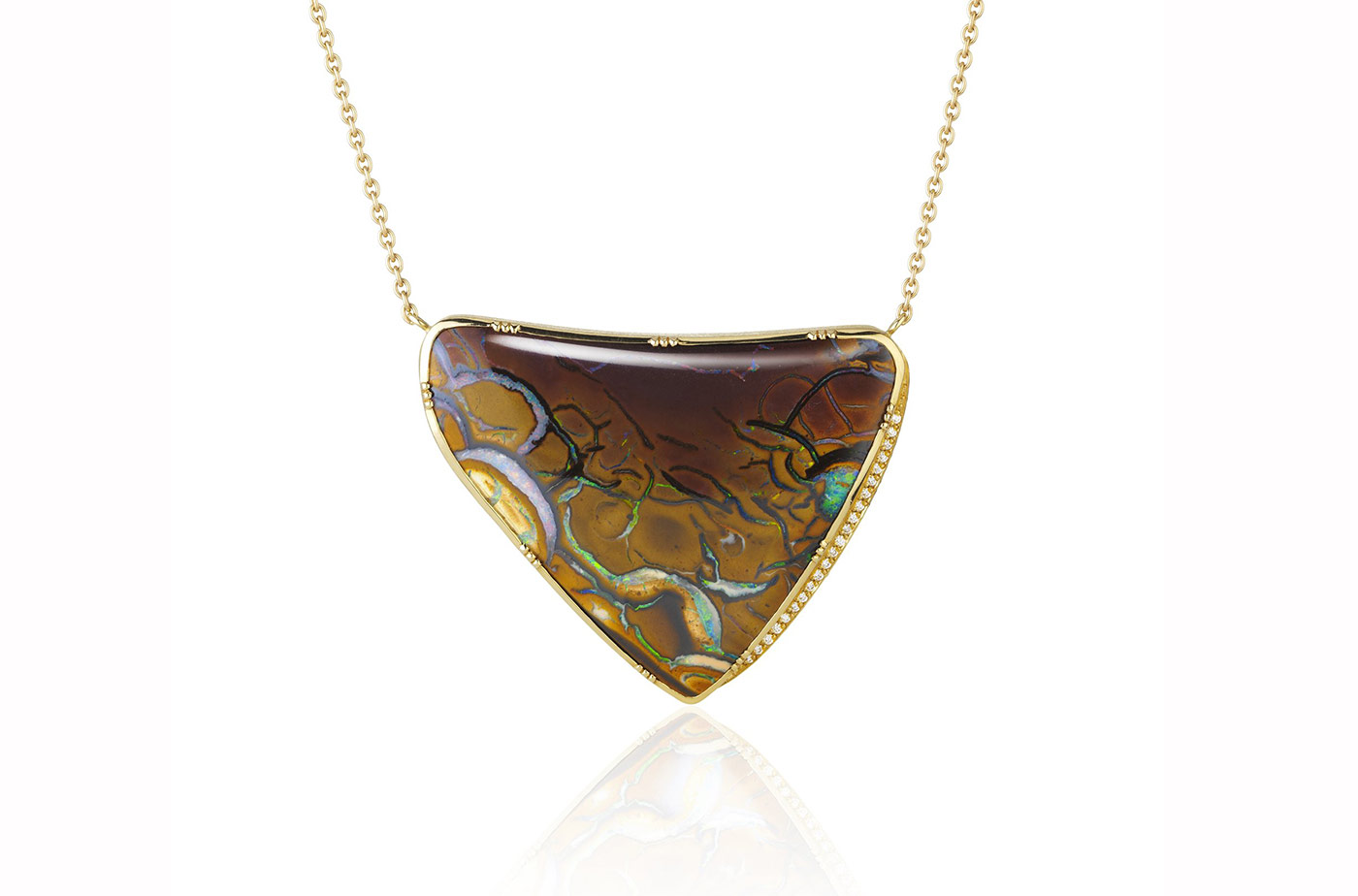 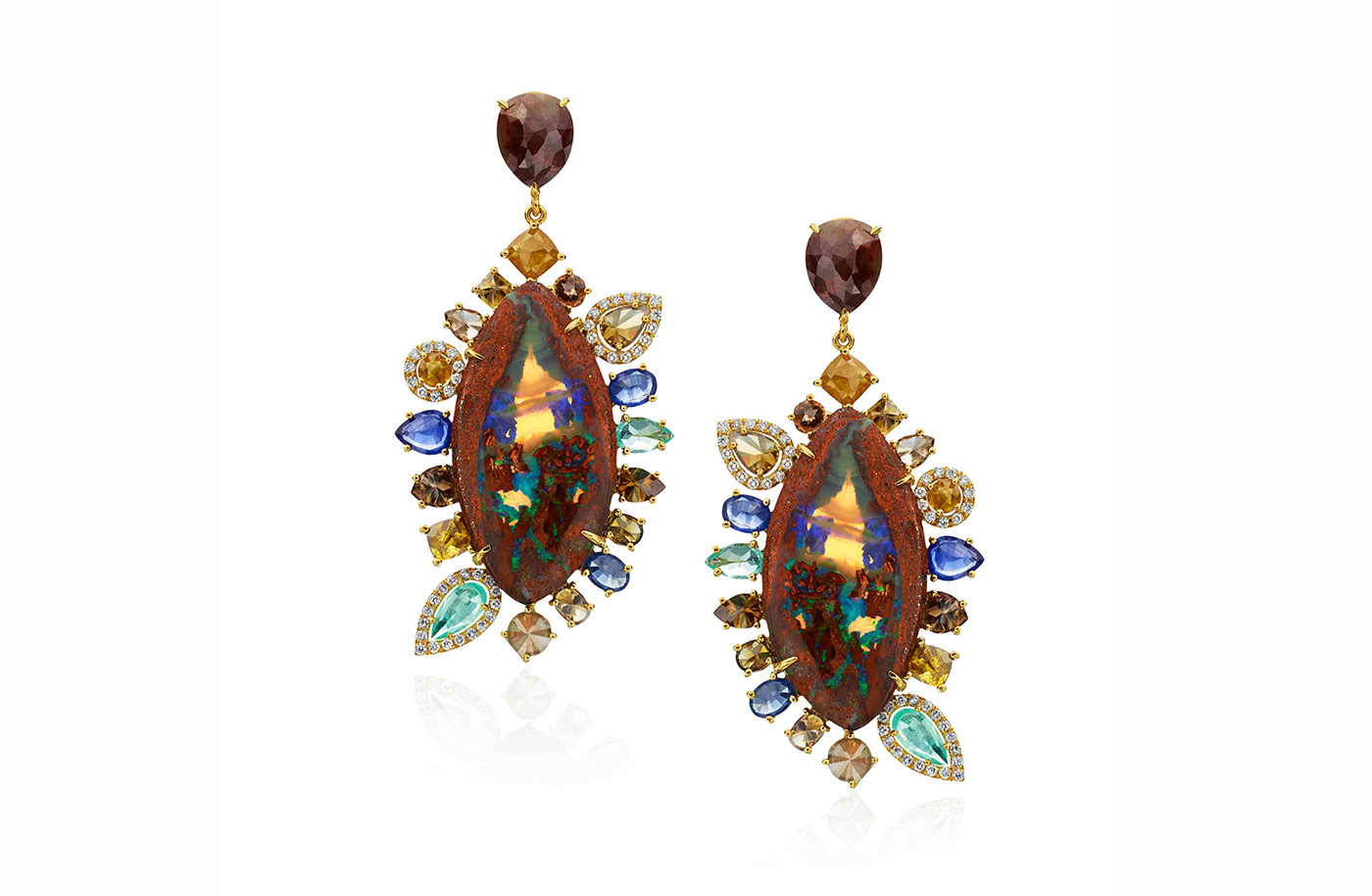 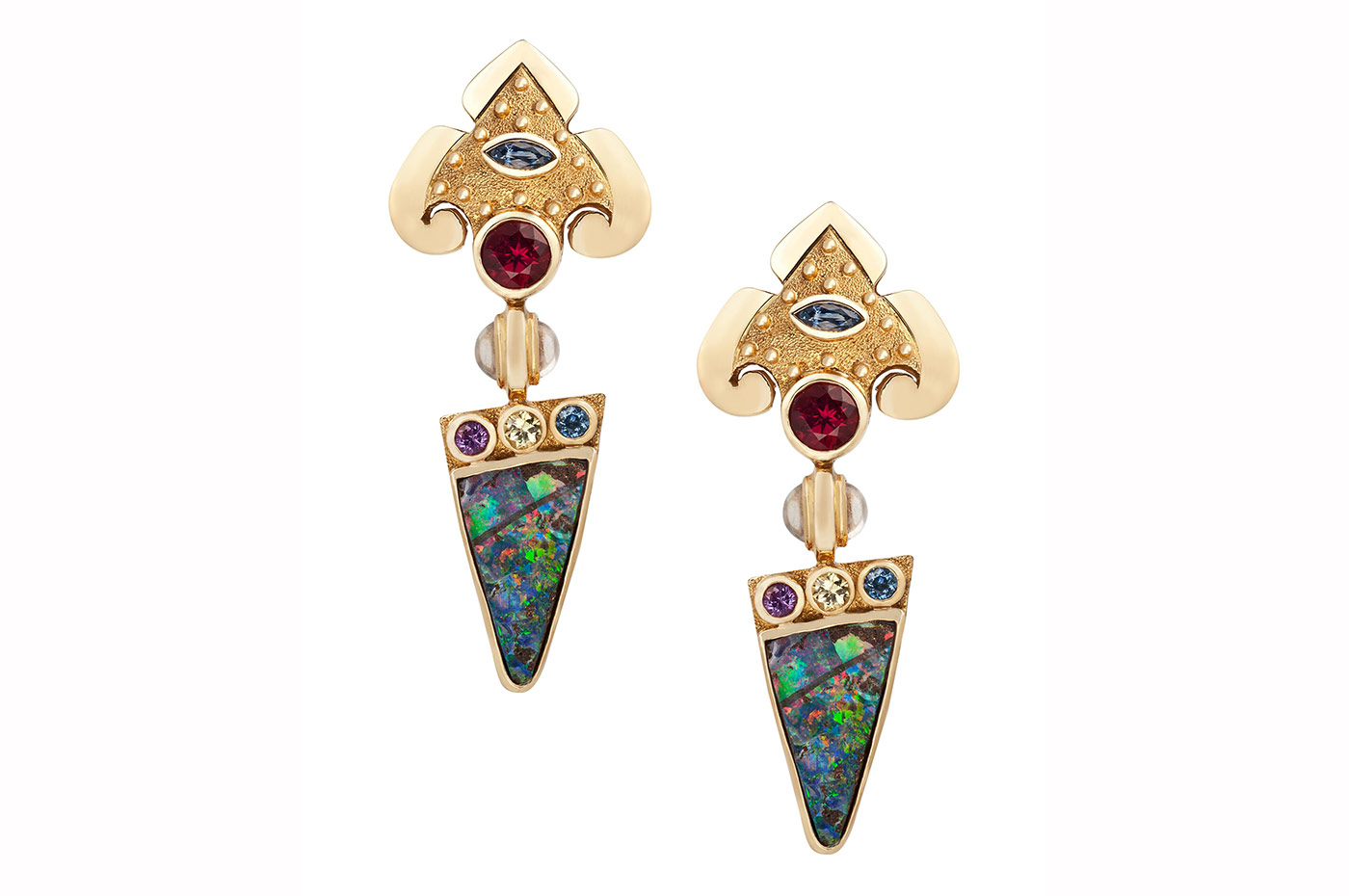 If you have been reading the articles on this website for some time, you must already be very familiar with the black opal from Australia, which is the most prevalent variety of opal used in jewellery. This October, however, we have chosen to shine a light on lesser-known opals like the fascinating Matrix opal. When this variety of opal was forming, it permeated its host rock, forming precious seams and inclusions that have the appearance of neon stripes or rivulets running through the stone. Found in Queensland, Australia, Boulder opal is the best-known variety of matrix opal. Easily identifiable because it has ironstone as the host rock, the variety and sheer uniqueness of Boulder opal has made it an increasingly popular choice with jewellers like Nina Runsdorf, Kimberley McDonald and Brooke Gregson. It is not only creative designers who love working with these unusual stones – the Cartier team has also fallen for the charms of the matrix opal. The standout piece in the French Maison’s Magnitude high jewellery collection was the Zemia bangle showcasing one of the most exceptional Matrix opals I have ever seen. Weighing 77.27 carats, it is surrounded by blue and purple sapphires alongside orange garnets. 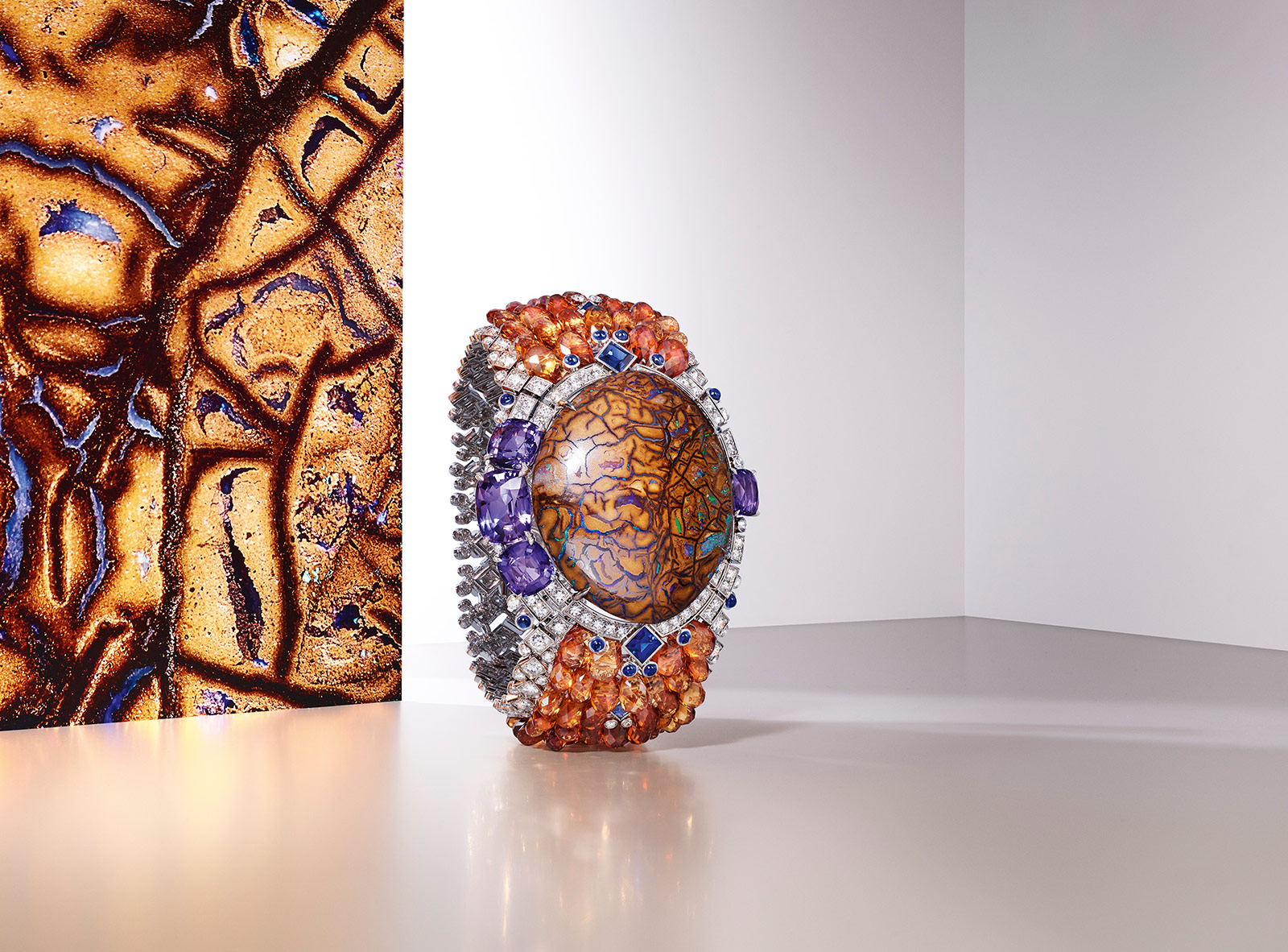 Found mainly in Mexico, fire opals are discovered in shades of yellow, orange and red, which is attributed to the traces of iron oxide they contain. While most opals are opaque with a beautiful play of colours, fire opals range from completely transparent to translucent and are uniformly a single colour. While few display the beautiful opalescence that is so closely associated with opals, the finest specimens do. The very best fire opals are fiery red-orange and completely transparent, with a shimmering play of colour captured within. You can see some beautiful examples in Neha Dani’s Shristi collection, in which she embellishes her Arunima earrings and Yuvarna ring with fire opals, sapphires and yellow and orange diamonds set in titanium. 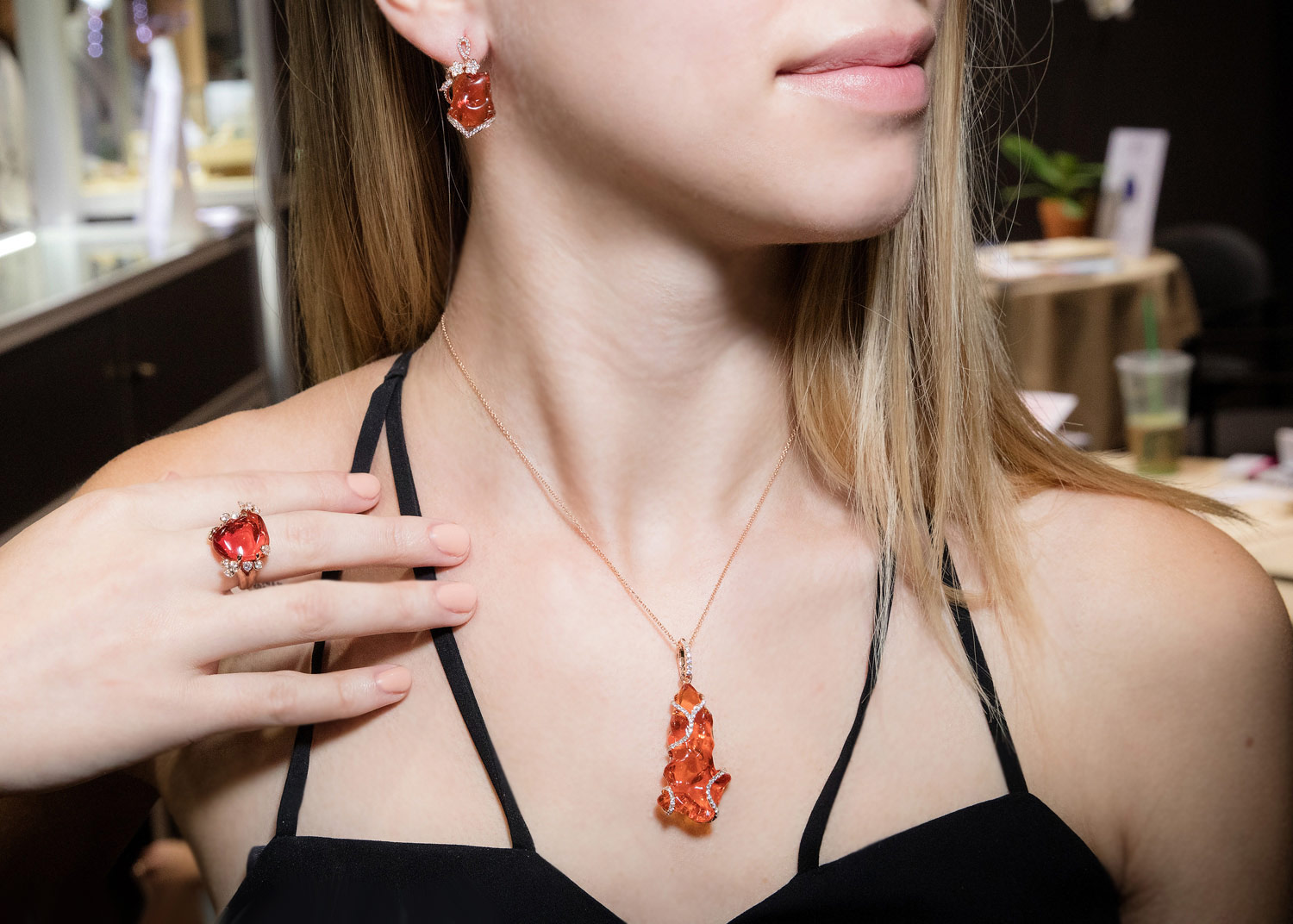 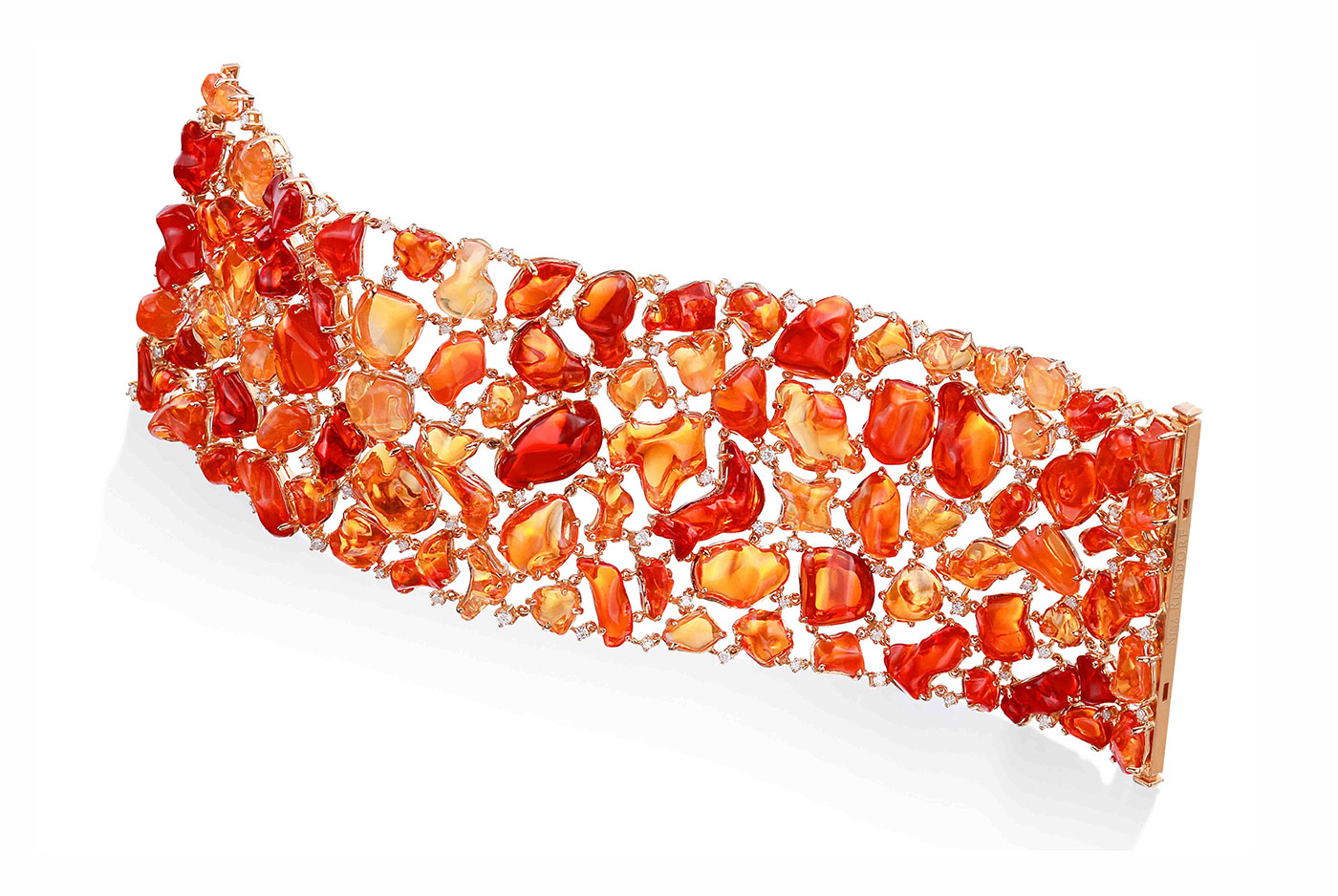 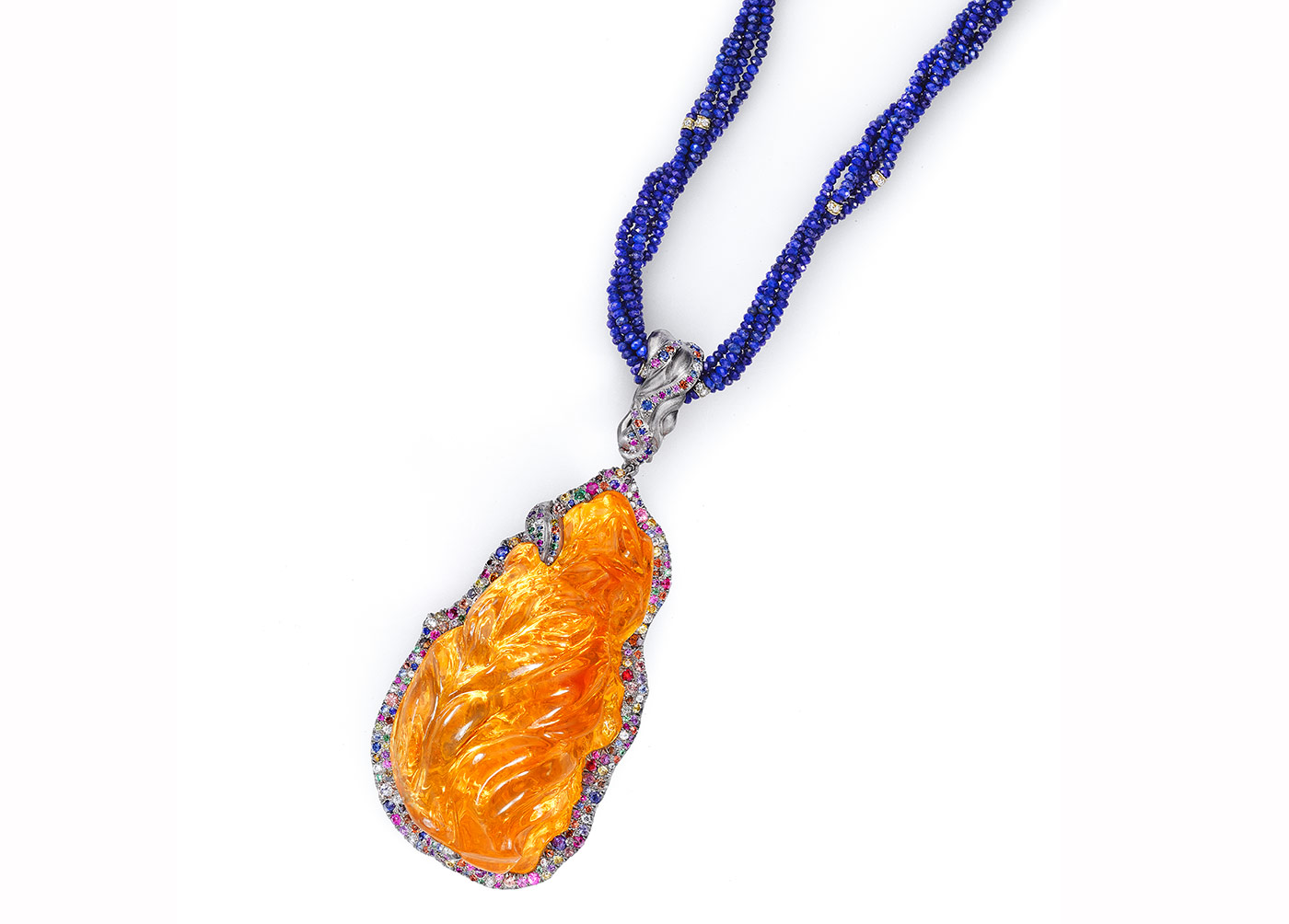 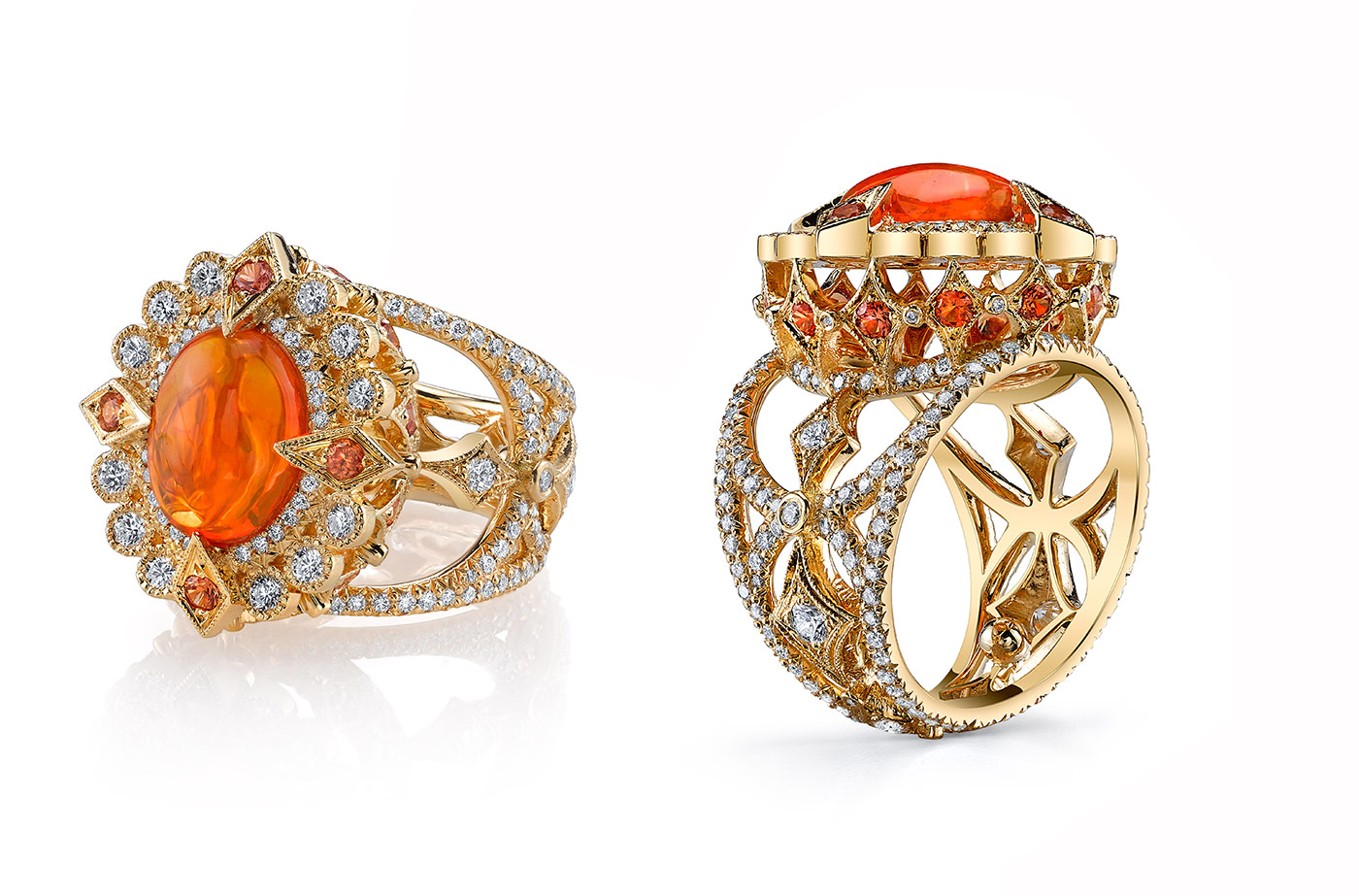 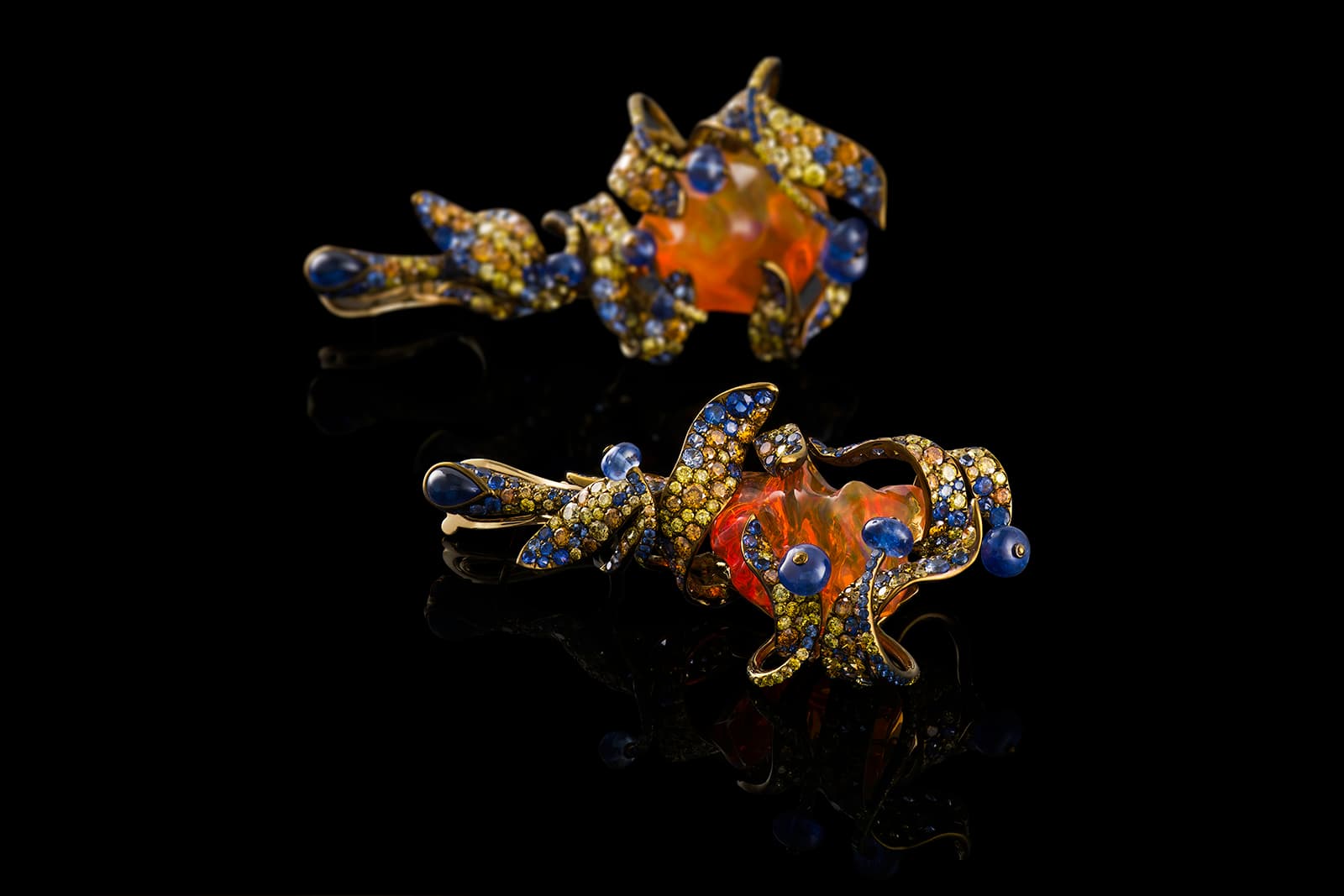 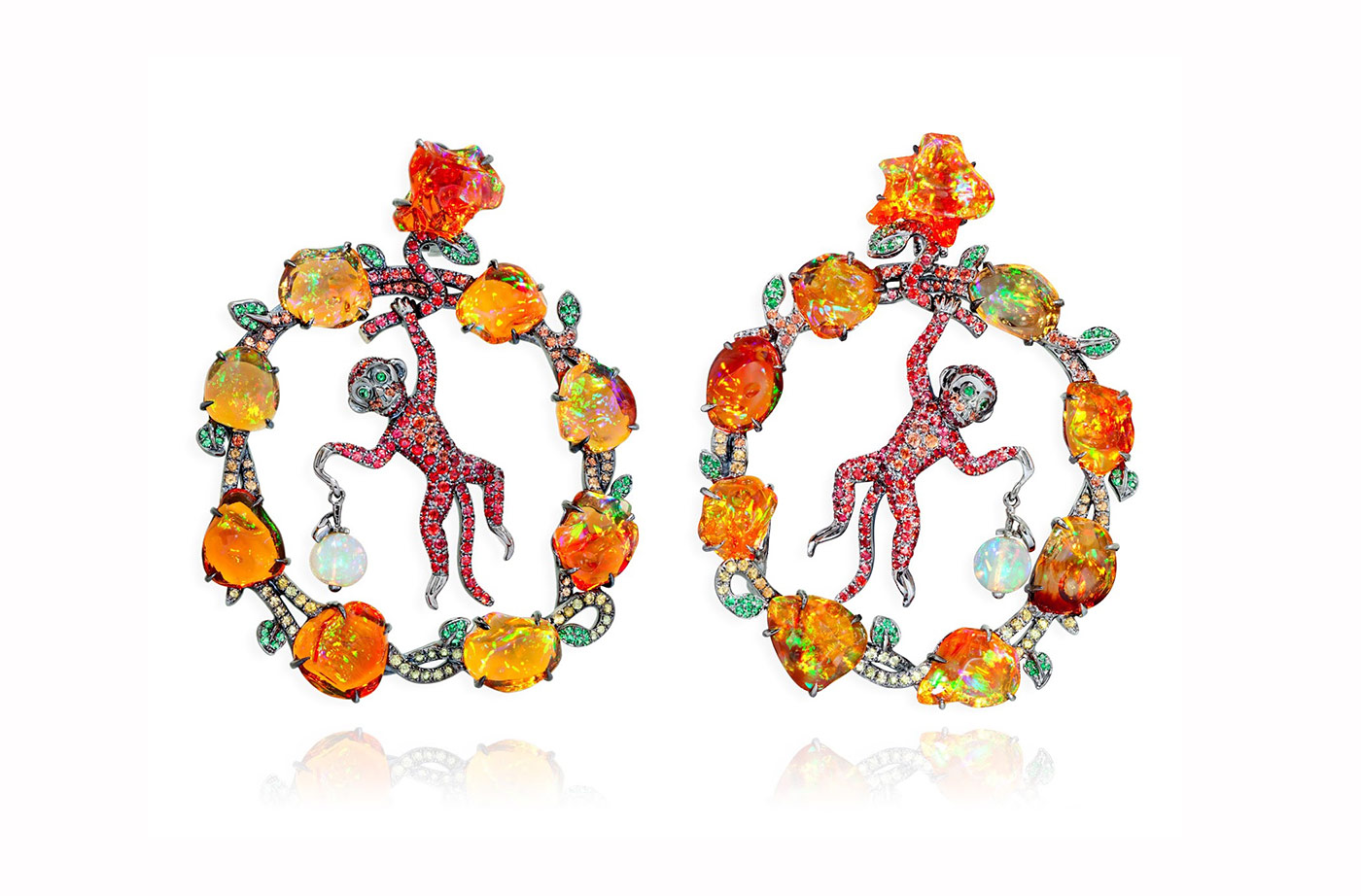 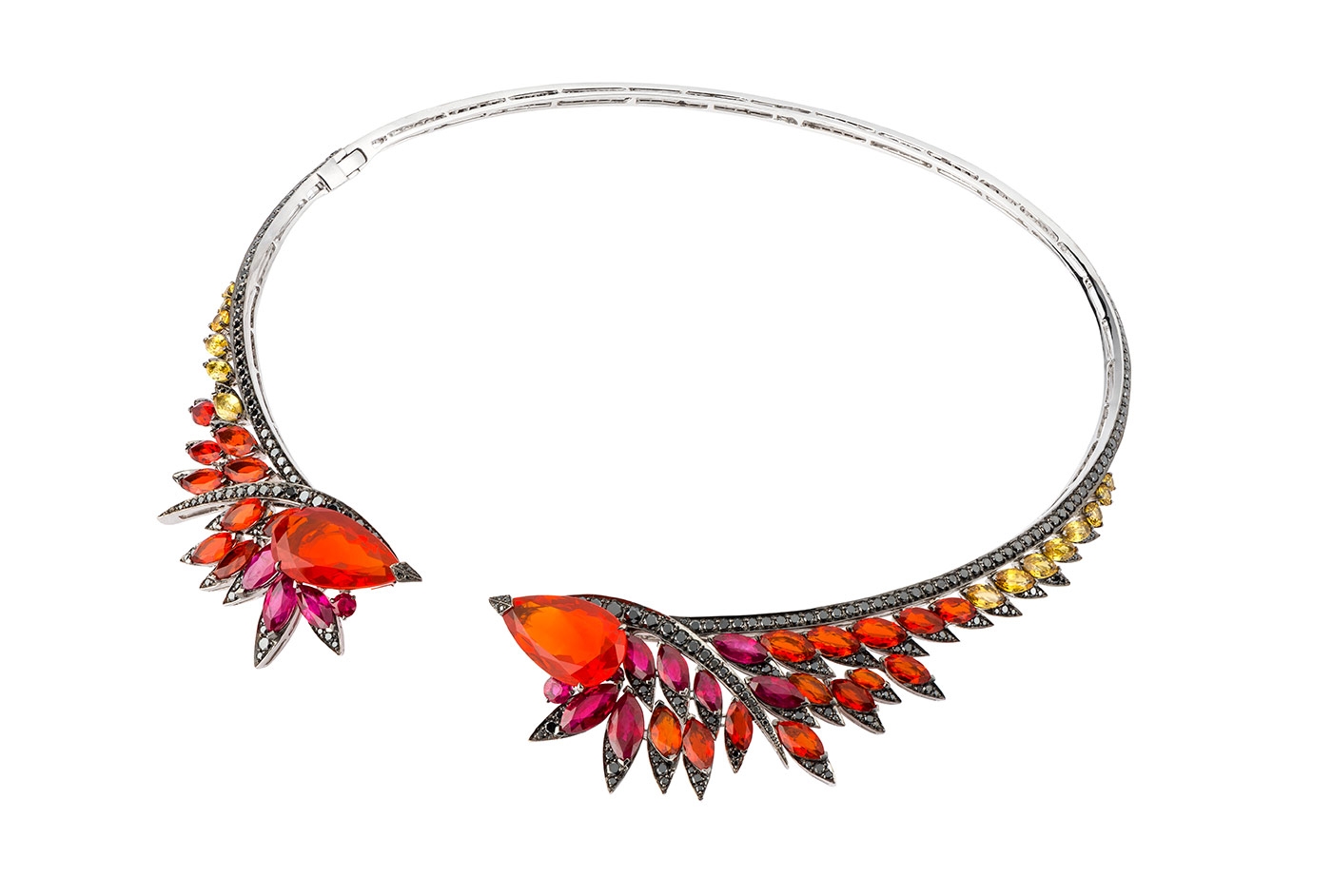 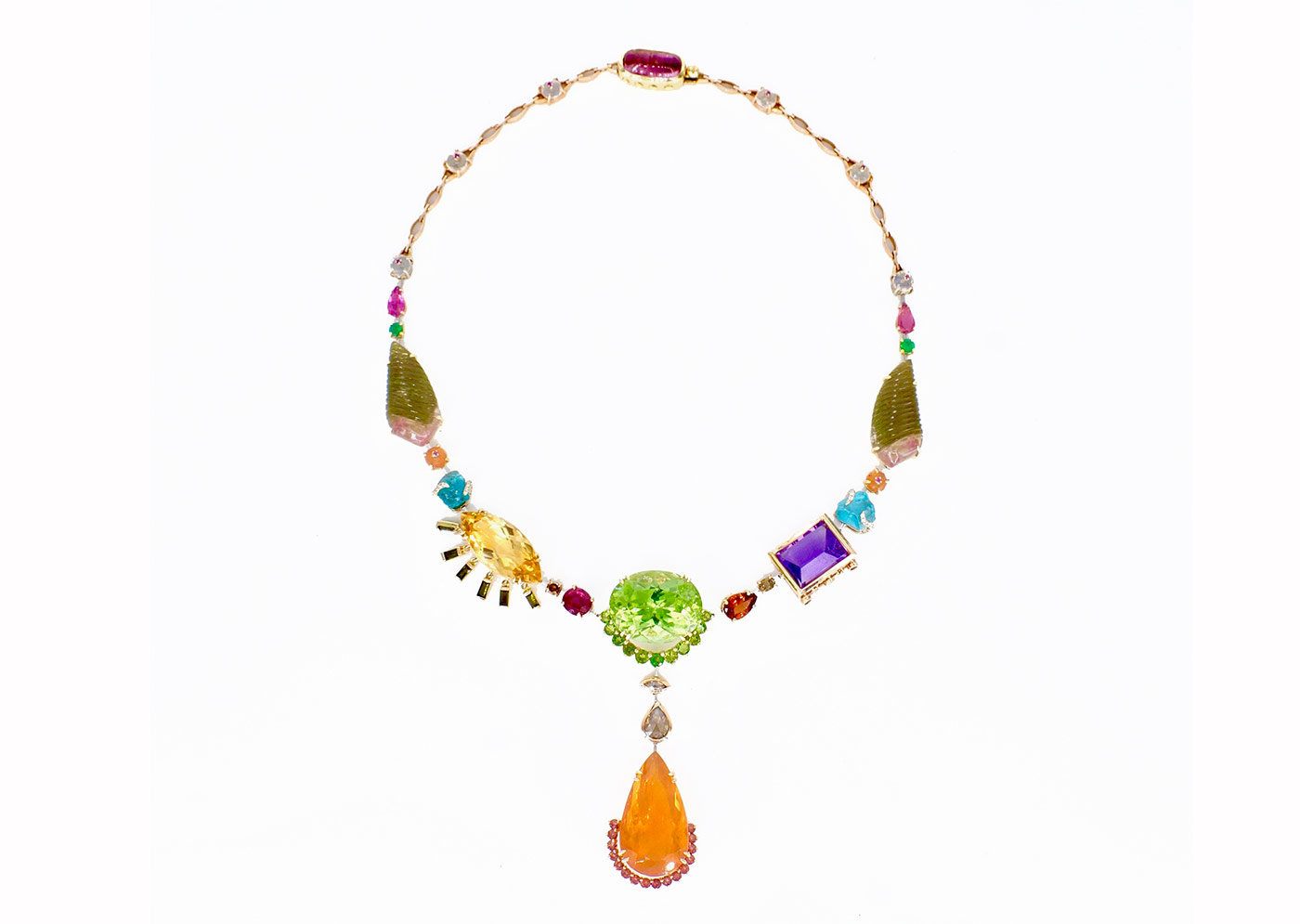 Pink opals are the prettiest of all the opals. A naturally occurring variety of the common white opal, pink opals are usually opaque and lack the colour play so closely associated with opals. Predominantly mined in the Peruvian Andes, but also in Mexico and Australia, what is most appealing is their captivating colour, which ranges from baby pink to rose pink and is very desirable in the world of fine jewellery. Not one but over 50 round pink opals soften the angular lines of the Art Deco-style Lotus necklace by Ananya (on the ain banner) and turn it into a very feminine choker. 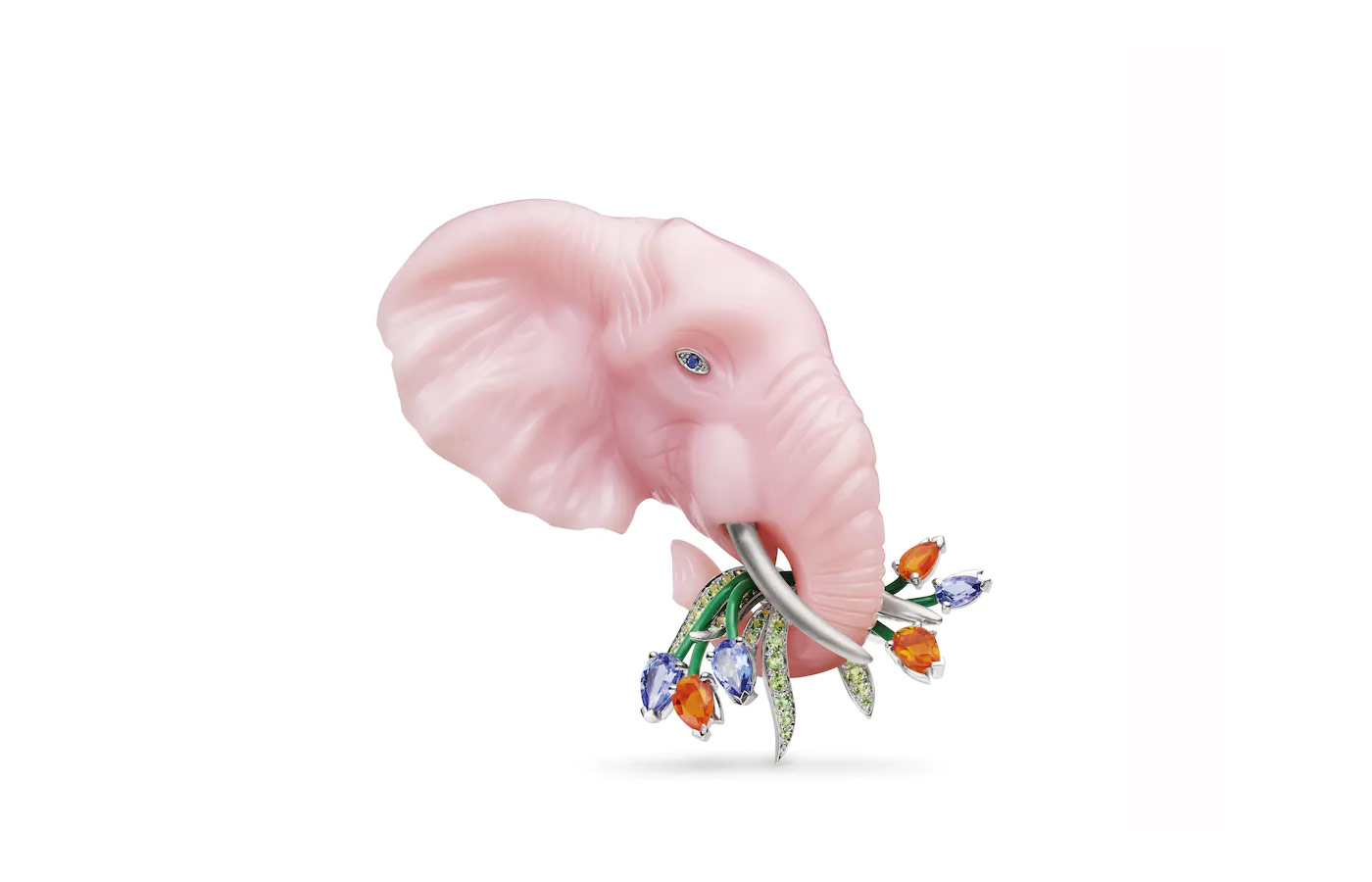 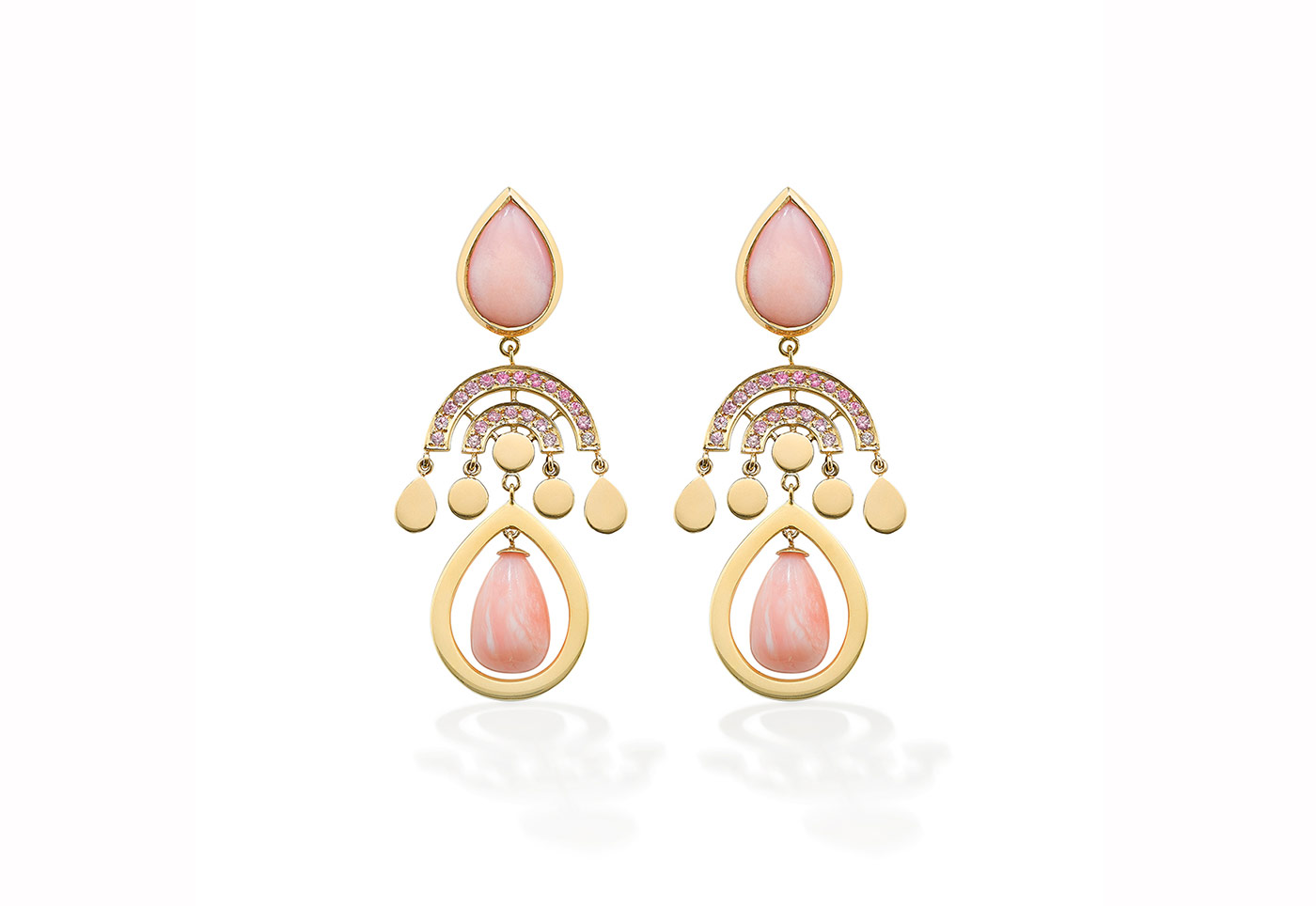 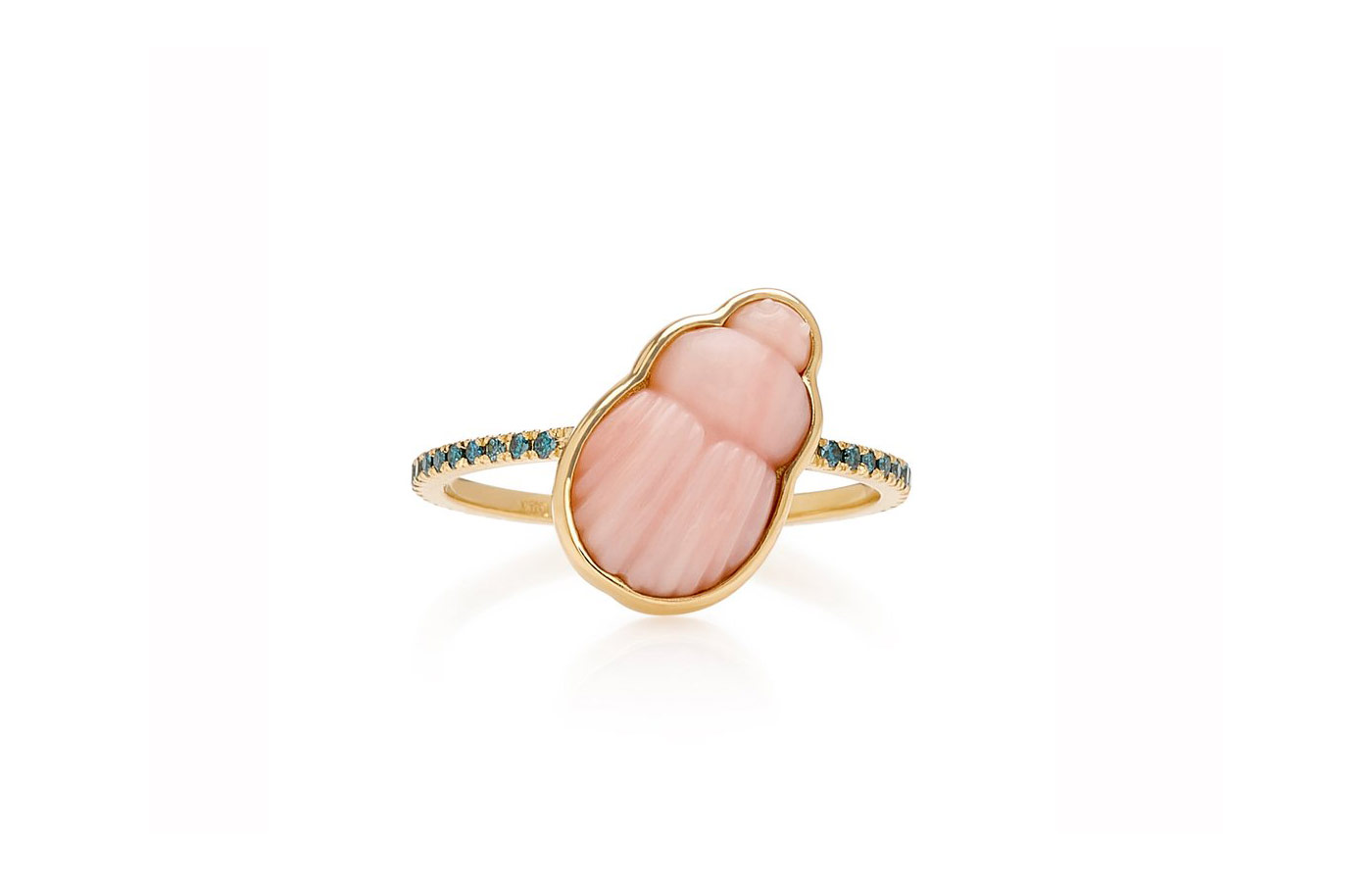 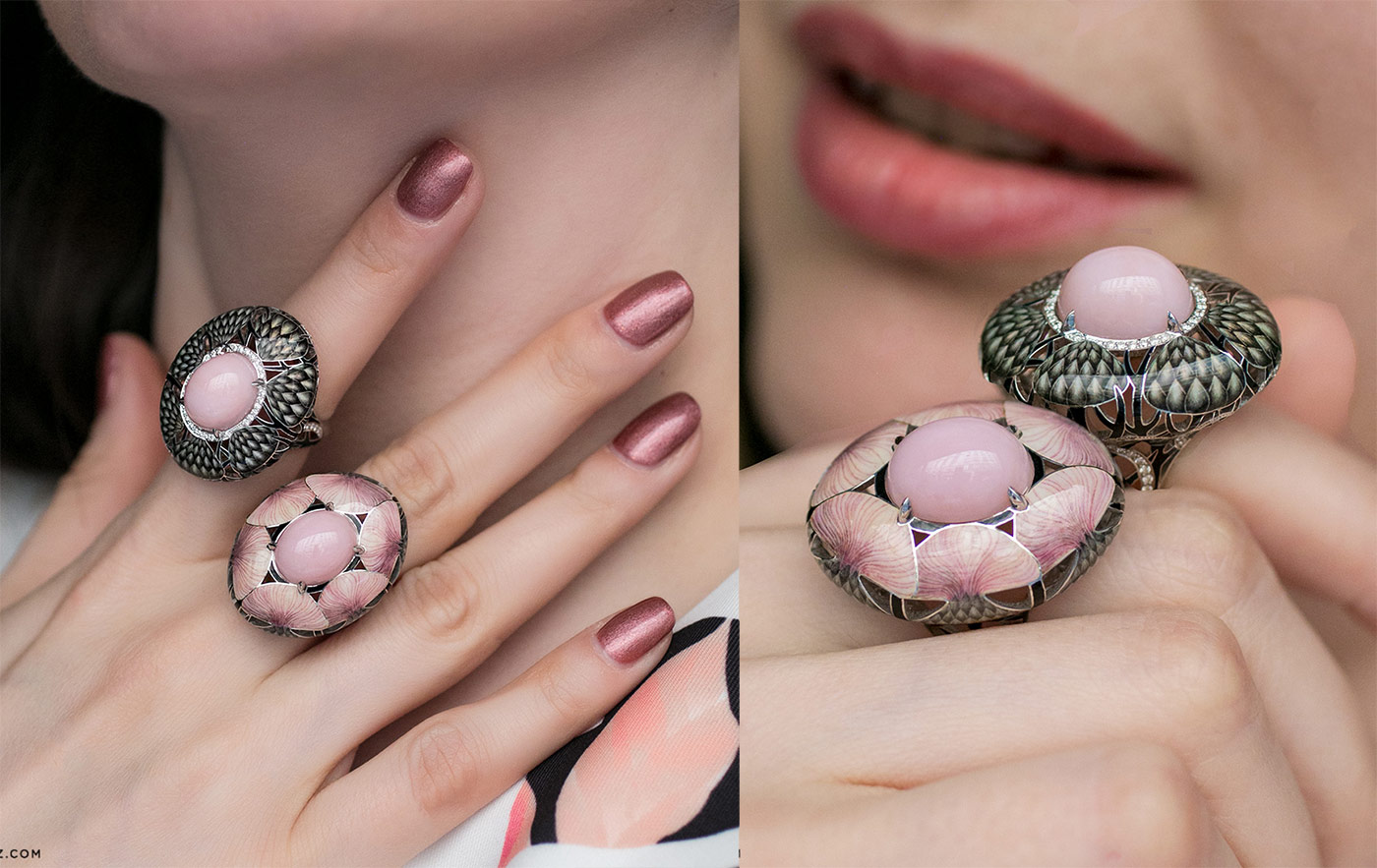 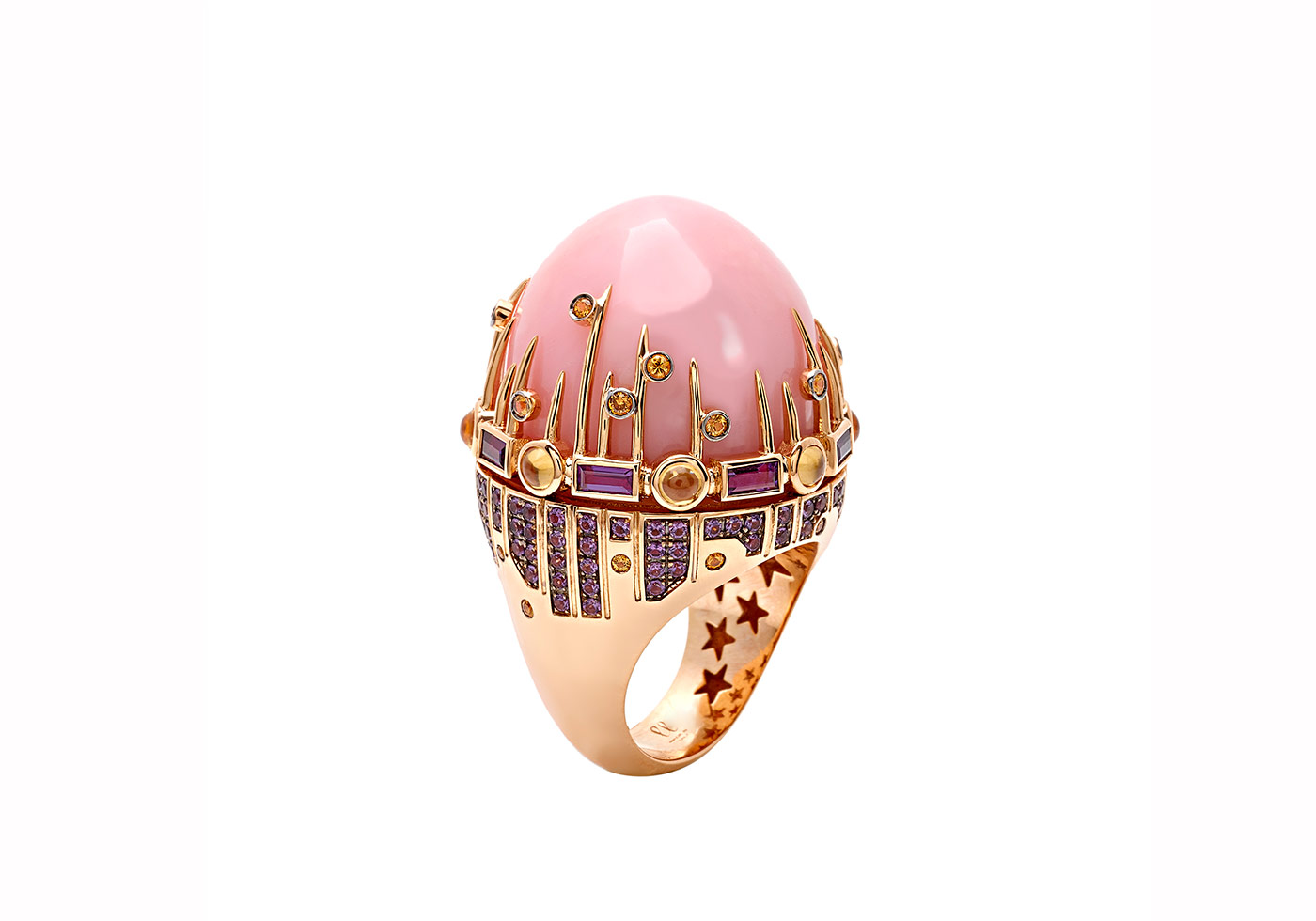 The dendritic opal, which is found all over the world, is an unusual variety of the common opal featuring dark plumes of metallic oxides like manganese and iron that appear on its milky white surface in the form of mosses, ferns or trees. We are used to seeing such patterns in agates, but it is rare to see a dendritic opal, so it happens that the two gemstones are often mixed up. Opal patterns are often coloured dark green or brown, with no two the same, earning this stone the nickname “moss opal”. Although these gems are not classified as precious, their wonderful patterns are utterly captivating, which caught the eye of Pomellato’s creative director Vincenzo Castaldo, who included dendritic opals in his Armorini Minerali collection of cocktail rings. 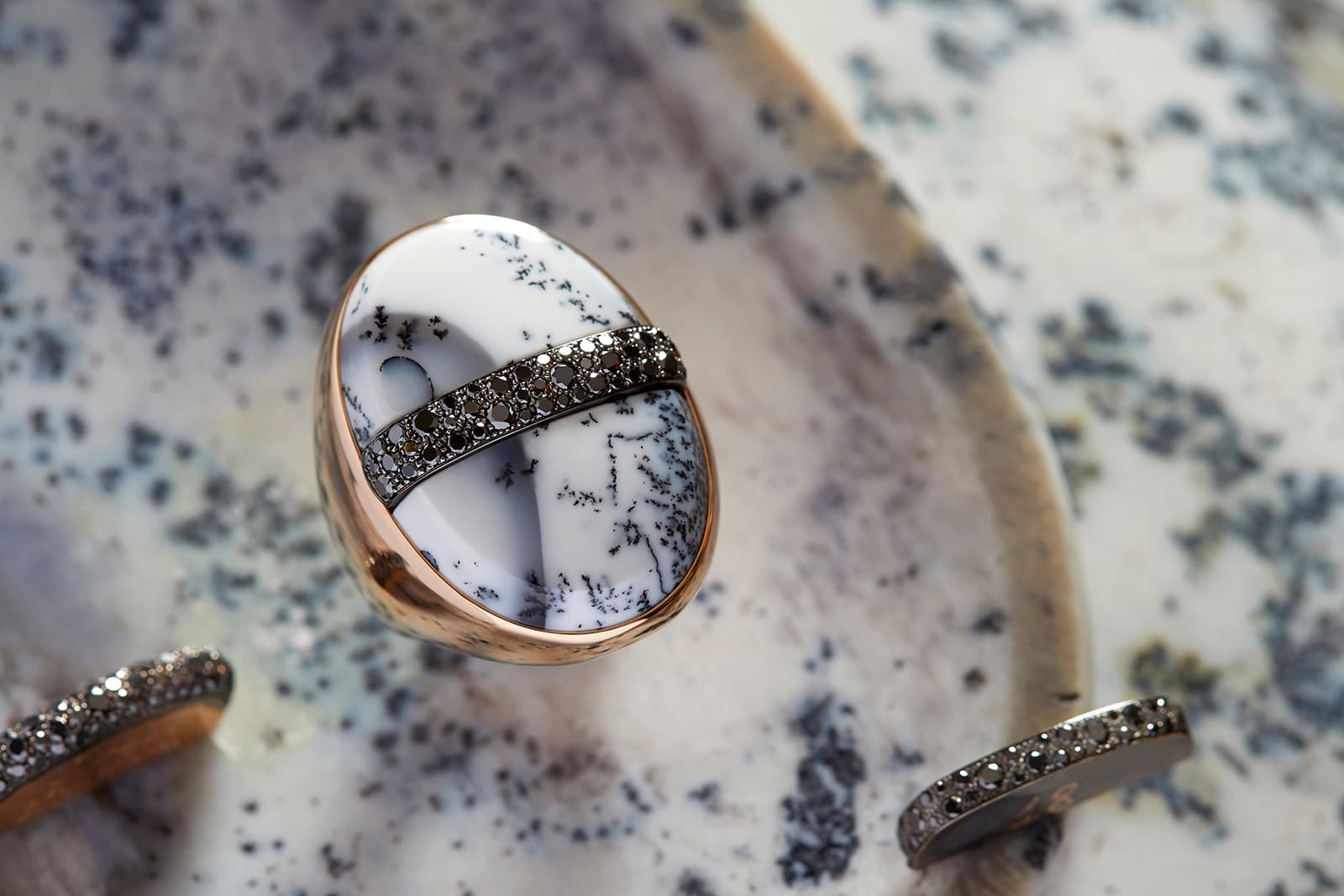 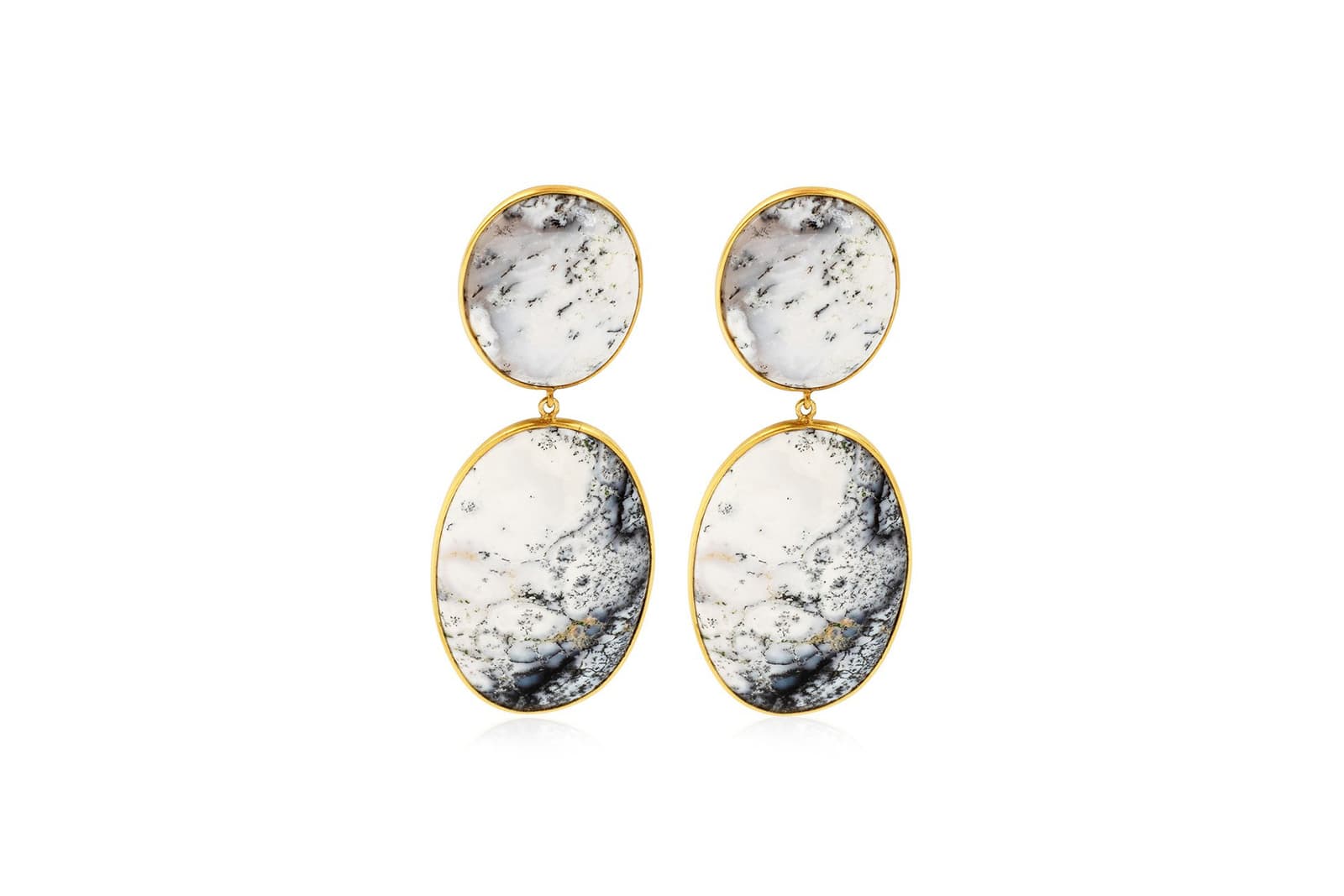 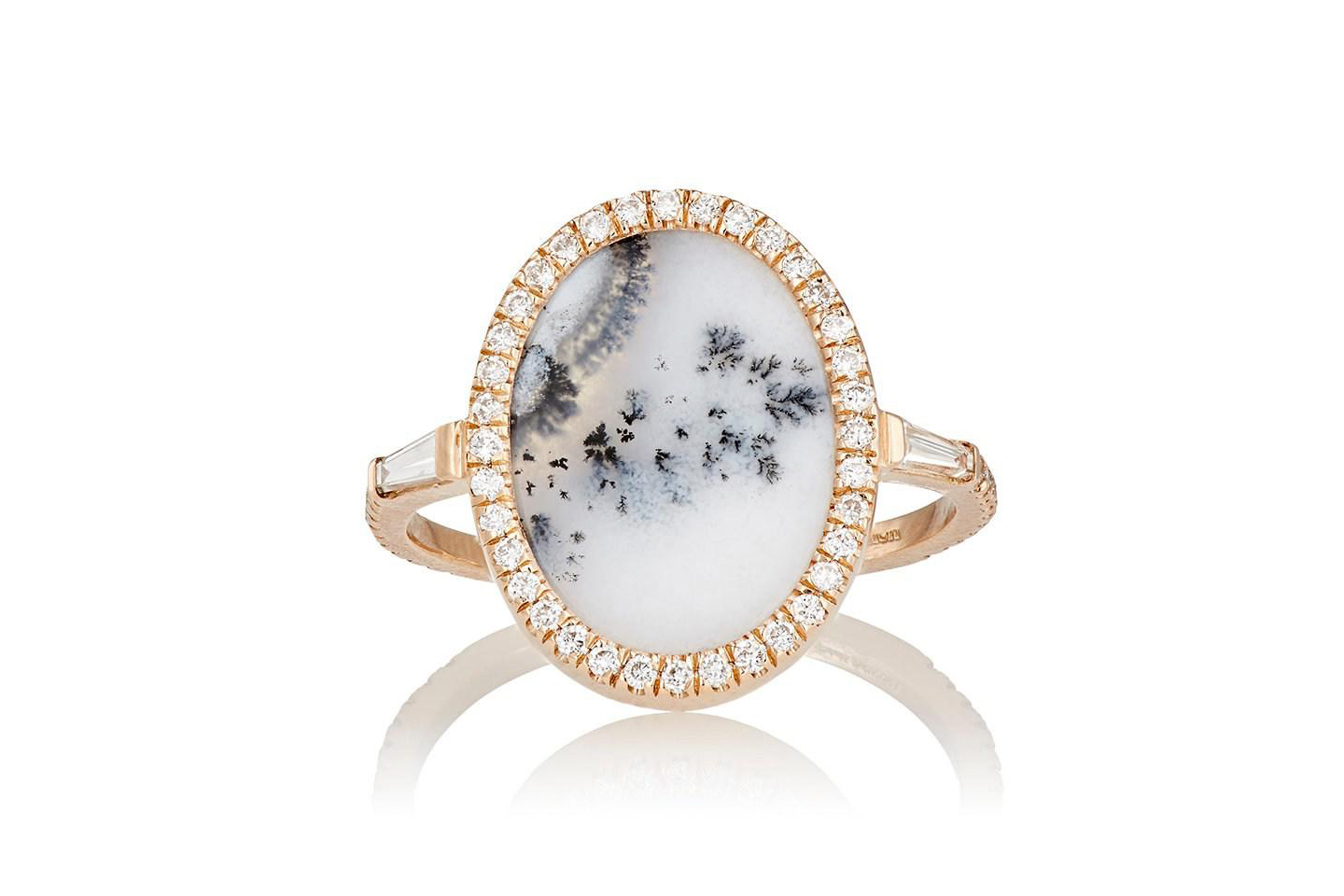 Finally, there is another variety of opal that stands out for its unusual appearance: the water opal. Found predominantly in Mexico, these transparent bluish-grey opals are often described as having a jelly-like appearance, but that is doing an enormous injustice to this mysteriously beautiful gem. Also known as Hyalite opals, some water opals displaying a very interesting property that distinguishes them from all other opals: they contain minute inclusions that cause them to glow fluorescent green when viewed beneath ultraviolet light. Often collected as mineral curiosities, these ‘electric’ water opals are the neon stars of the opal world. 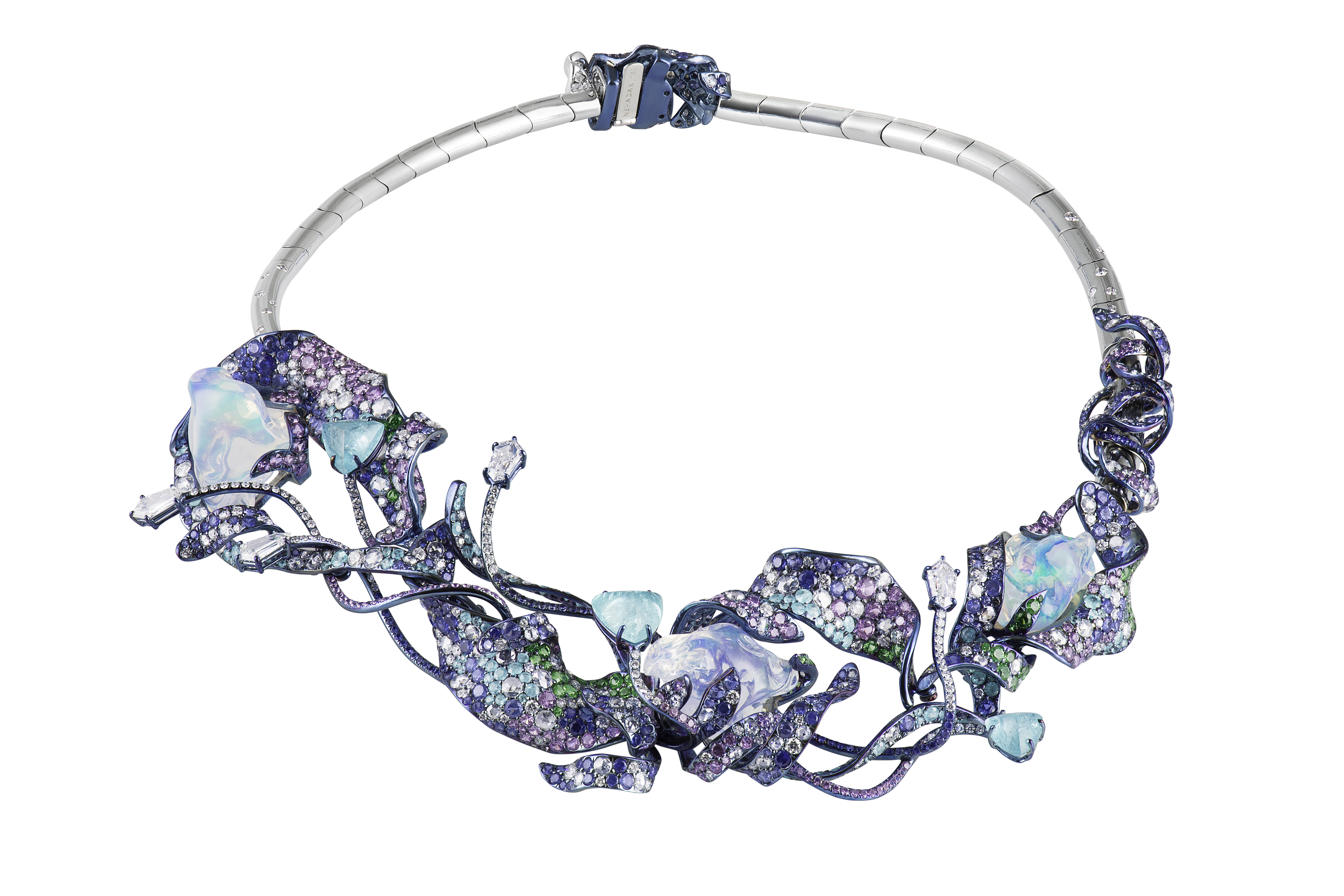 As you see, there are enough varieties of opal to suits the tastes of collectors and for jewellery designers to explore their creativity through the prism of colours that only opals can offer.