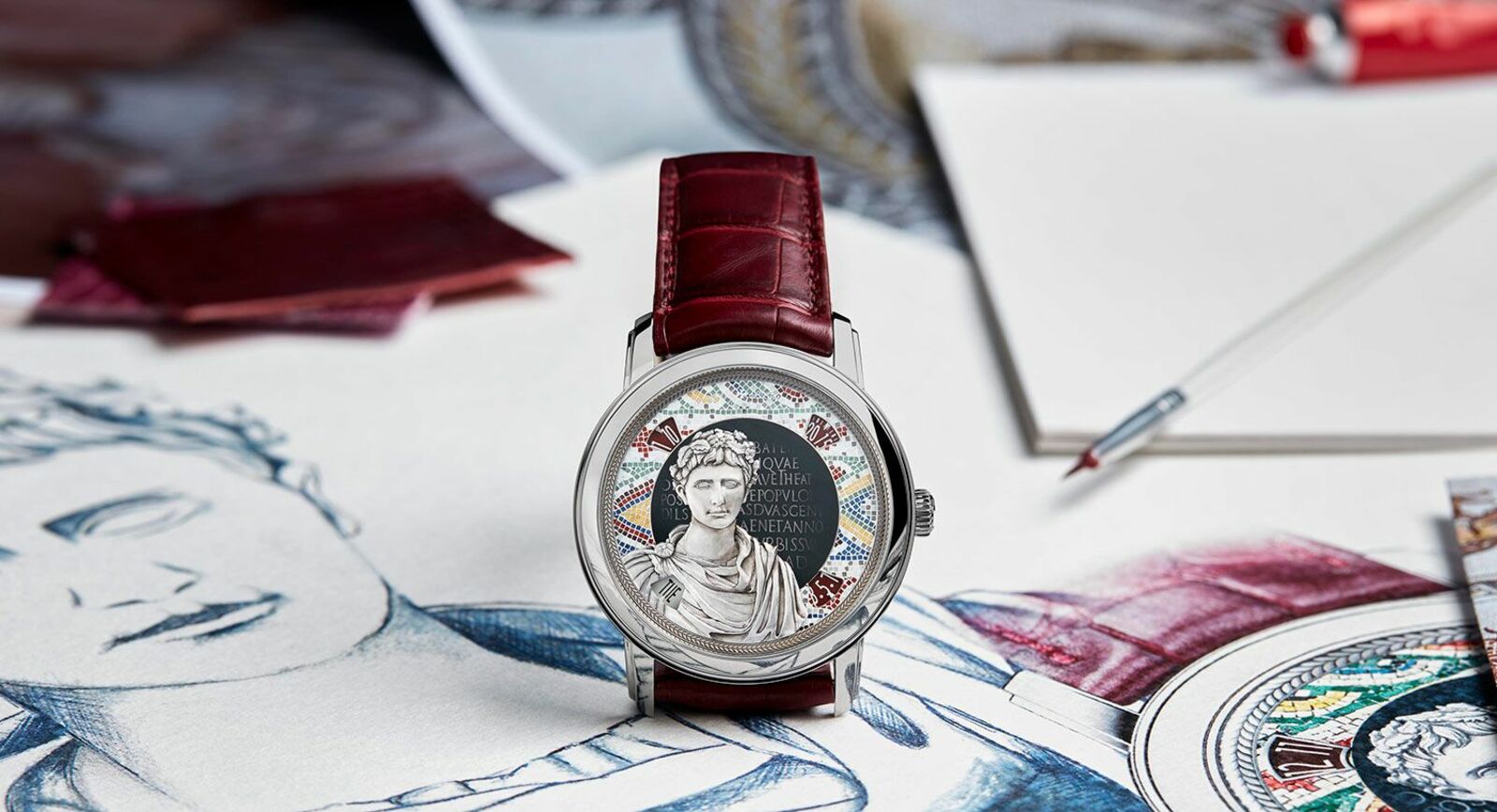 In May 2022, under the cover of the Louvre’s iconic Pyramid by celebrated artist I. M. Pei, Vacheron Constantin unveiled its latest series of Metiers d’Art timepieces. This extraordinary evening for 200 guests included musical performances inspired by four great civilisations of the past, which have also influenced the dials of a quartet of timepieces. Let us introduce you to these limited-edition masterpieces.

Vacheron Constantin and the Louvre Museum are two iconic artistic institutions in their own right. When they join forces, it’s obvious that some sort of magic is going to happen! The result of this new collaboration is a series of timepieces that celebrate craftsmanship but also the history of the world and the periods that have shaped mankind. 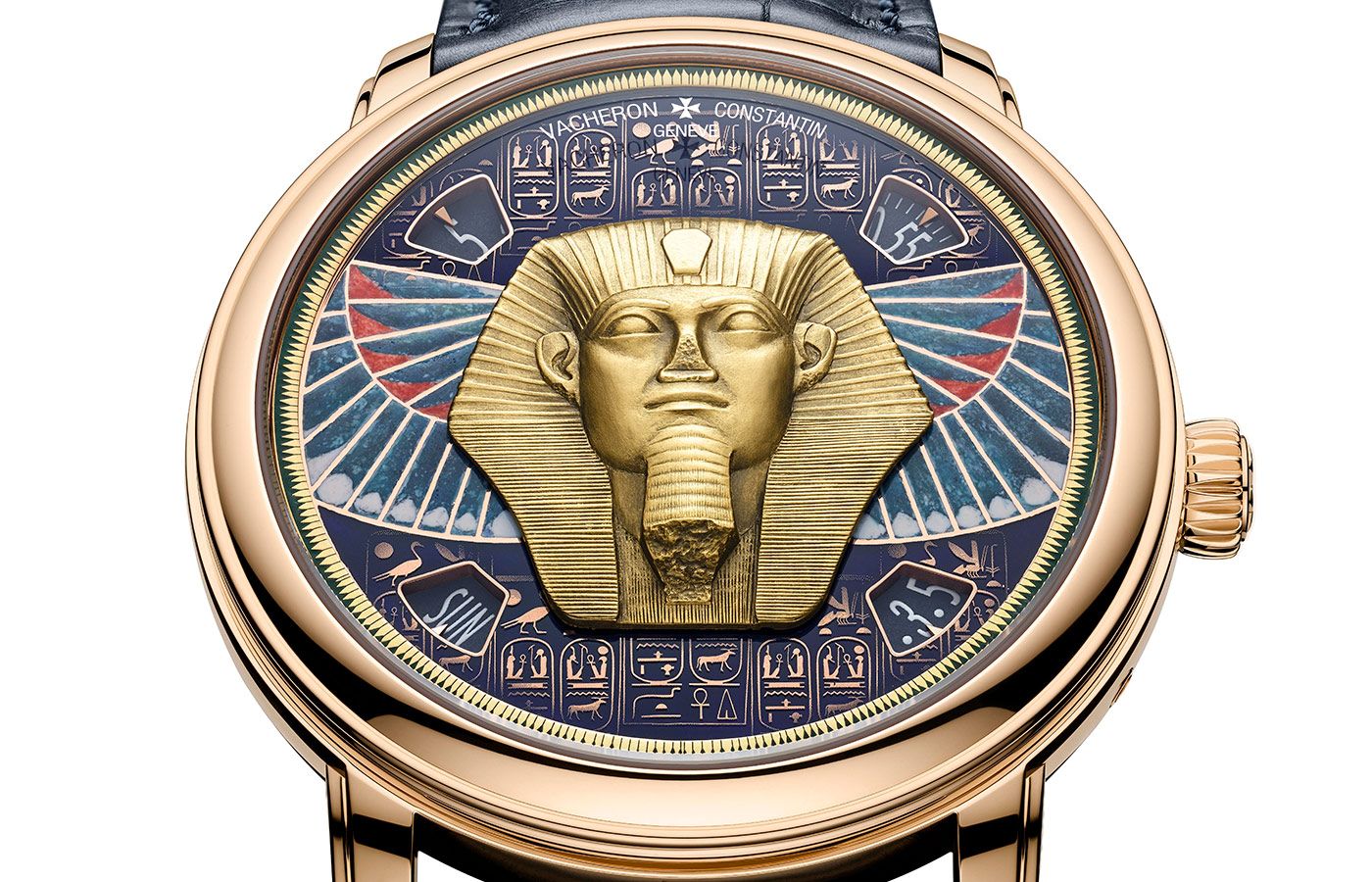 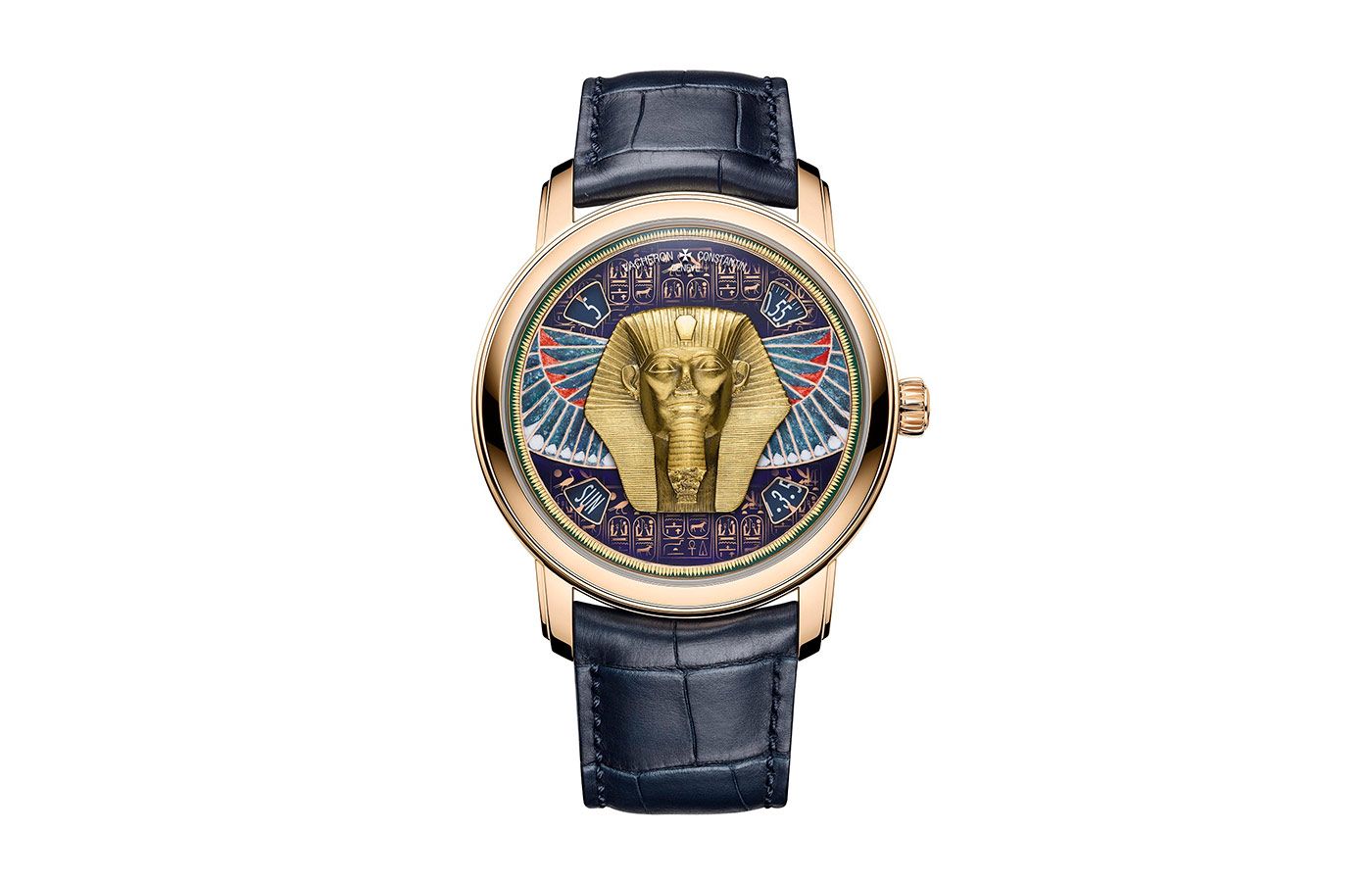 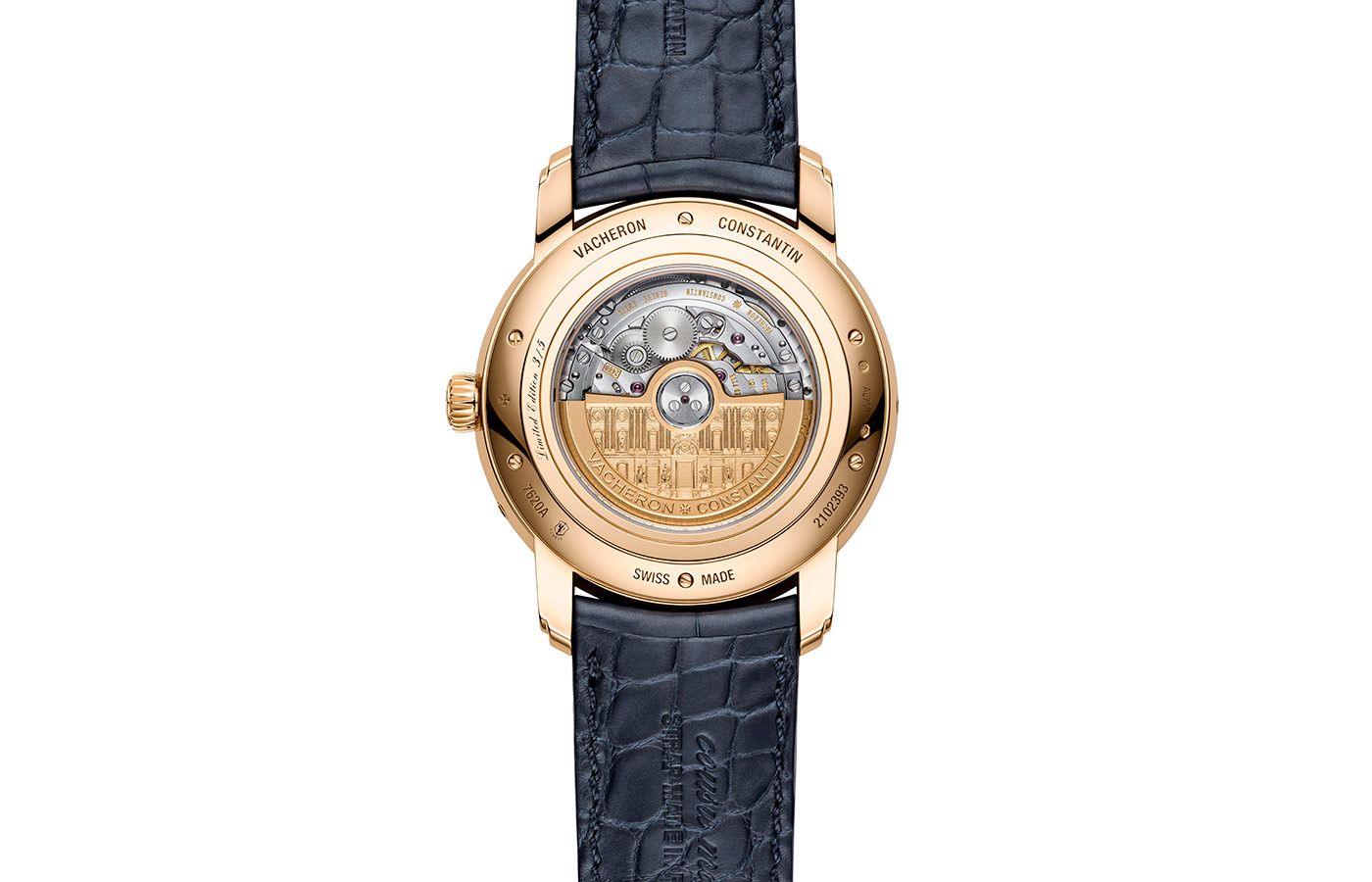 Founded in 1755, the Maison of Vacheron Constantin has remained constant in upholding its core values of elegance, simplicity and creativity. Its watches are not only beautiful but also food for thought; often inspired by significant men and women throughout time and etched with interesting emblems and symbols. The Louvre, which shares its historic knowledge on a larger scale, remains similarly constant in its vow to safeguard history through art. Opening its doors for the first time in 1793, the building was originally a medieval fortress built by King Philippe-Auguste in about 1200 before it became the landmark we know today. Full of history and character itself, becoming home and sanctuary to some of the world’s most precious artefacts seems like a perfect twist of fate. 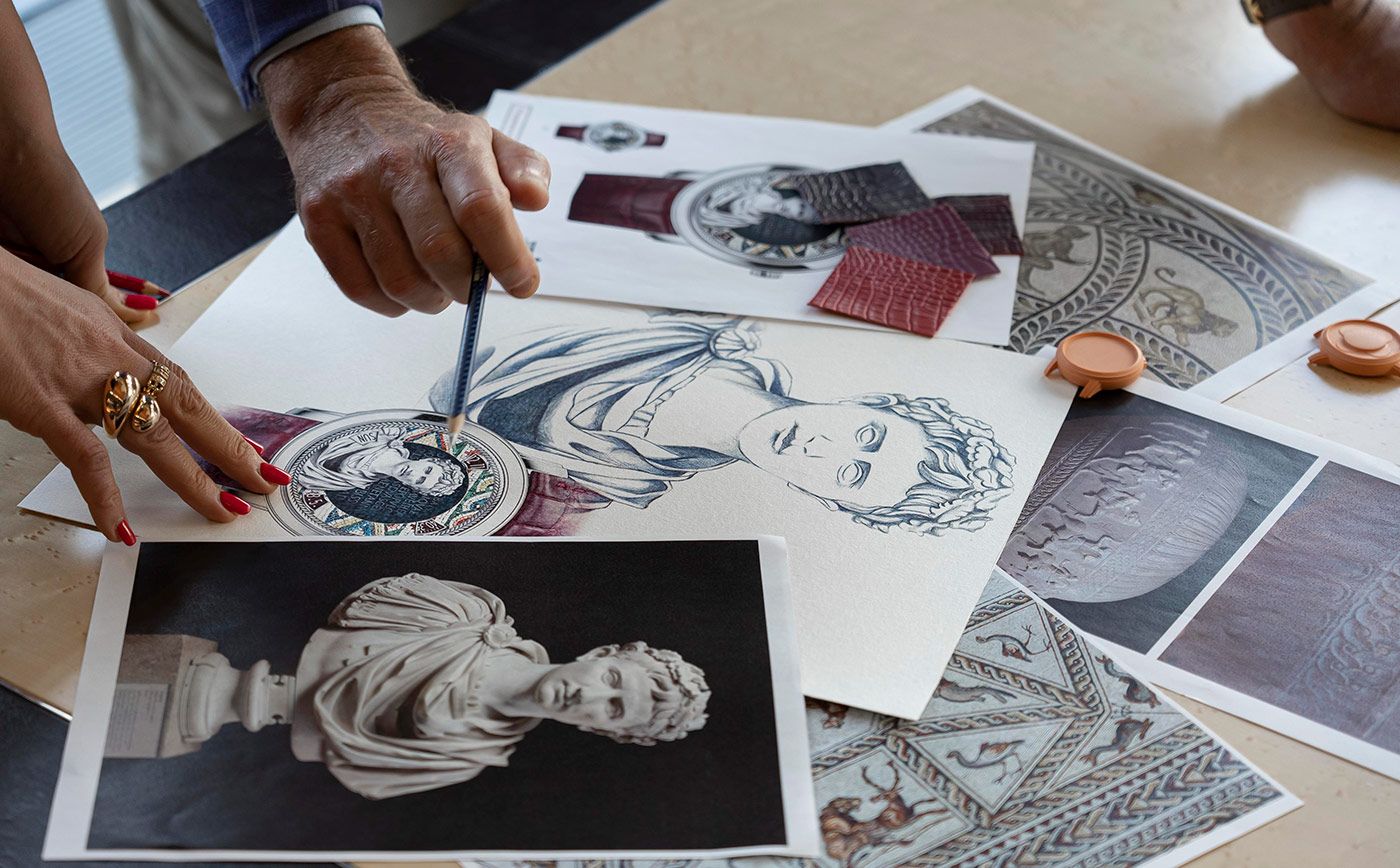 This joint-creative endeavour is not the first collaboration between the two establishments. From auctions to exhibits, the two bodies have joined forces on multiple historical and artistic ventures. The latest was an online auction hosted by the Louvre in which Vacheron Constantin offered a one of a kind edition Les Cabinotiers, whose dial was to replicate the work of art chosen by its future buyer. More than simply sales, the Louvre and the watch brand collaborate on luxury items that make clients think, learn and evolve. In the words of Christian Selmoni, Style and Heritage Director at Vacheron Constantin: “This is not a simple sponsorship, but a partnership involving multiple levels of collaboration. Given the museum’s extraordinary inventory dedicated to antiquity, these choices were natural.” 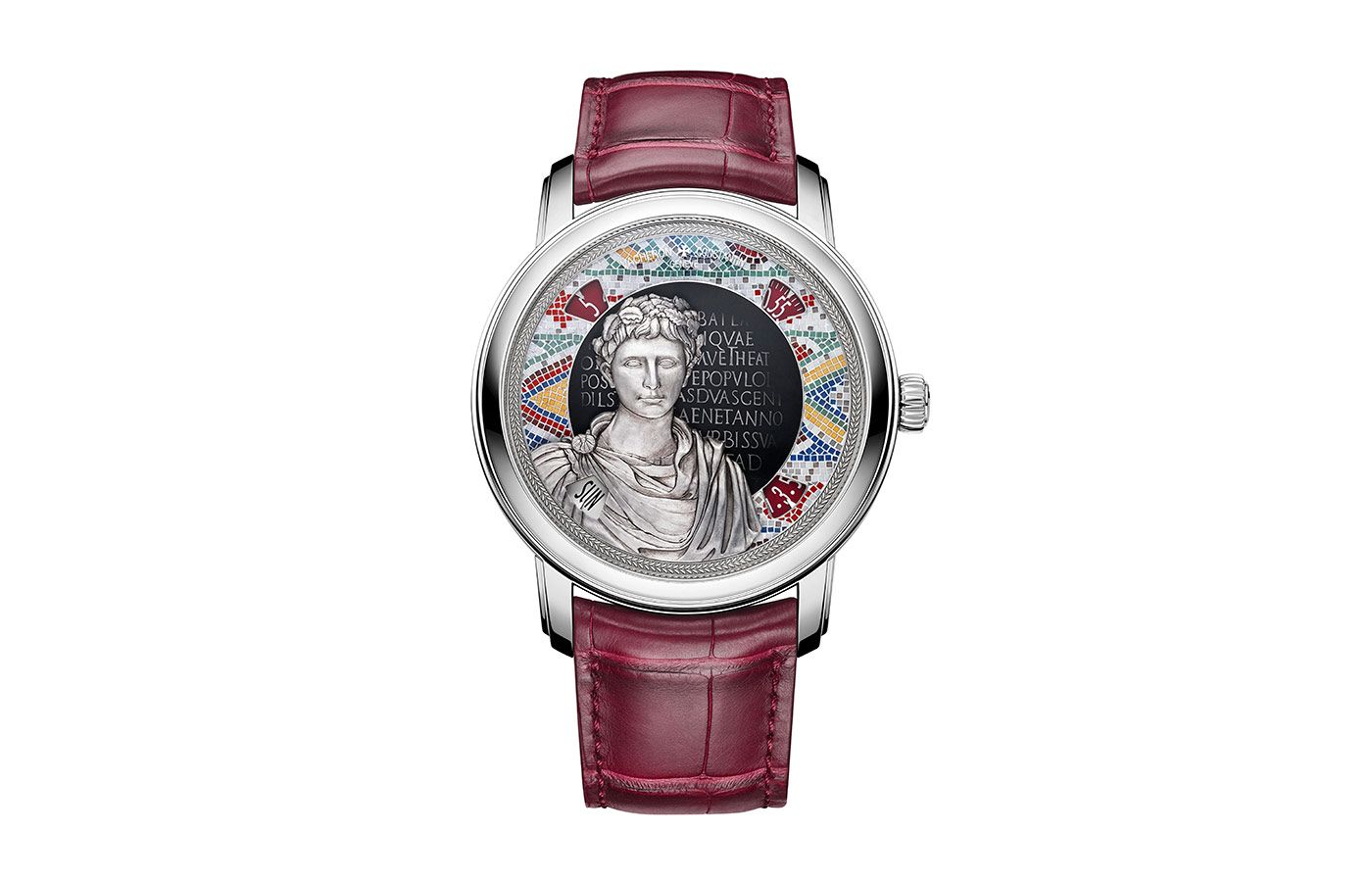 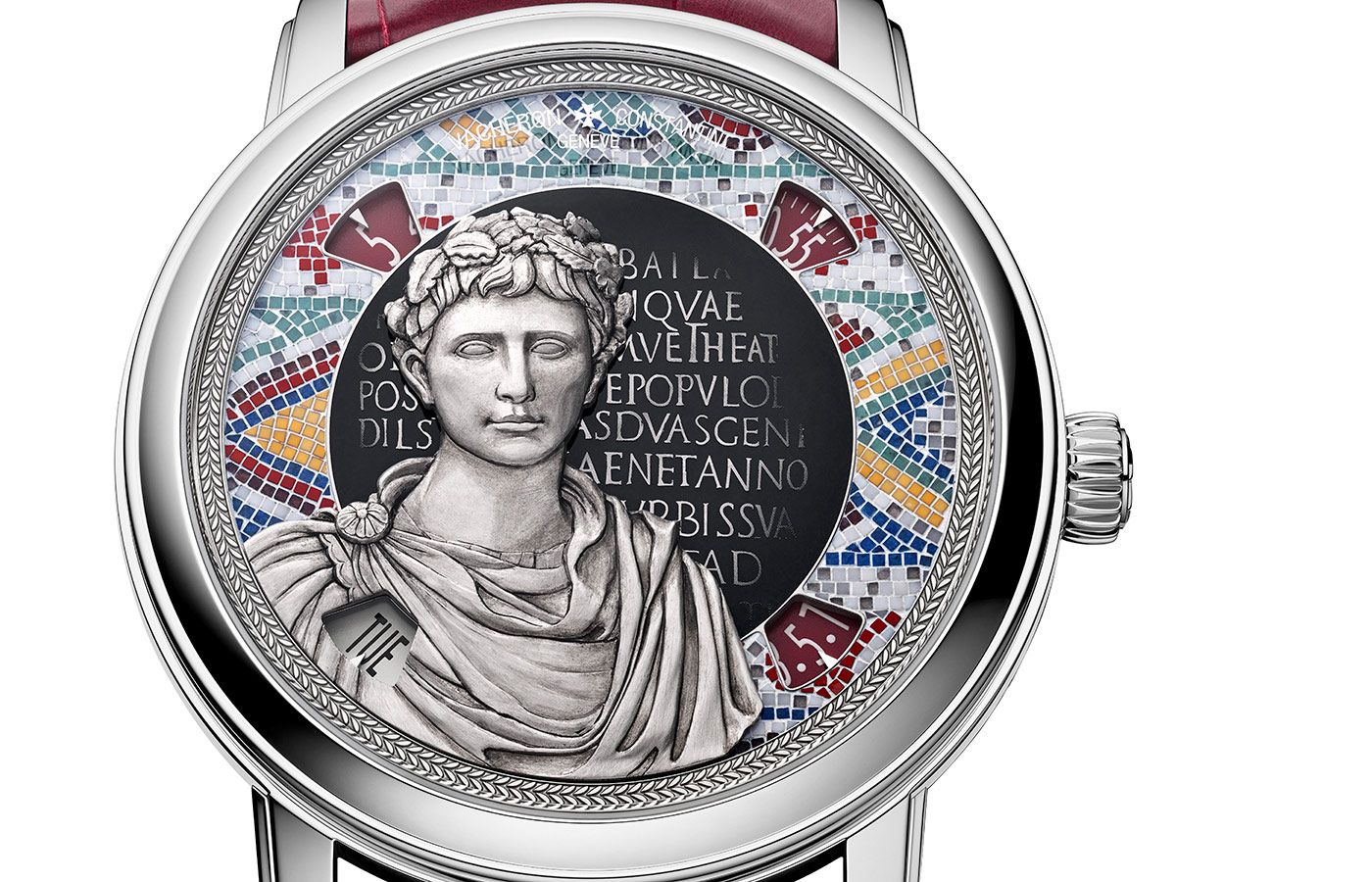 This is quite evident in their latest series of watches - A Tribute to Great Civilizations. Taking design direction and inspiration from four important civilisations, the two entities chose four works on display in the Louvre galleries to steer the designs of each dial. The first is the Grand Sphinx de Tanis – a 1.82-metre-tall statue from the Ancient Egyptian empire dating from 2035 to 1680 BC. It is one of the largest sphinxes preserved outside of Egypt. The next period honoured is the Persian Empire (559 to 330BC) through the miniaturised representation of Lions de Darius – a glazed-brick decoration that was once housed in the Palace of Darius in Susa, the capital of the Persian Achaemenid Empire in southwestern Iran. 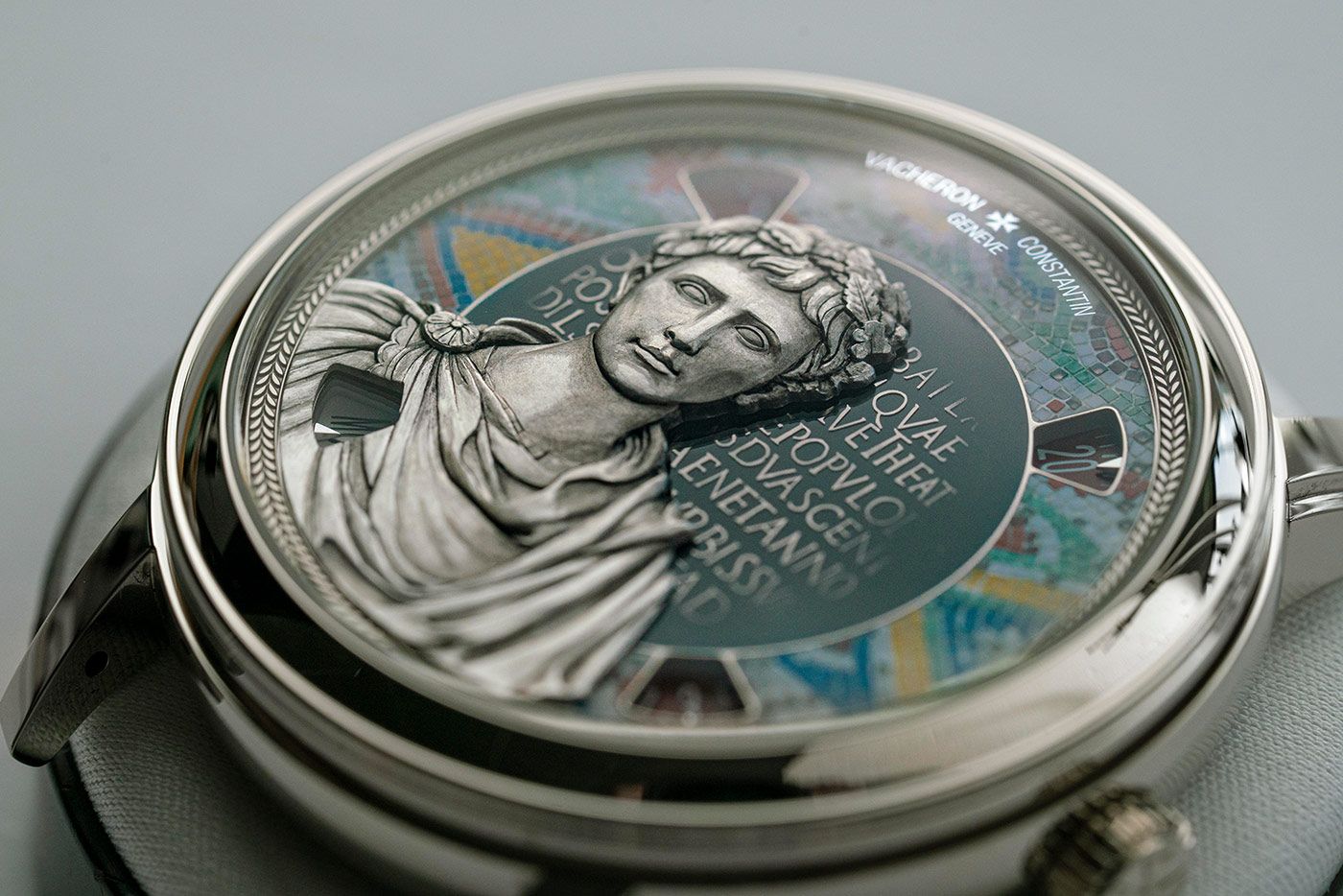 The third watch depicts an enamel representation of Victoire de Samothrace - a winged goddess from the Antigonid dynasty (277 – 168 BC). Last but most certainly not least is the bust of Octavian Augustus, the adopted son of Julius Caesar. Celebrating the Roman Empire of the Julio-Claudians (27 BC - 68 AD) this statue was erected in tribute to the first citizen of the Roman Empire. These four time periods were chosen to honour the important social and scientific discoveries attributed to their time. We owe the invention of writing, the birth of democracy, philosophical thought, the development of architecture as an art form and unparalleled artistic achievements to these four eras. 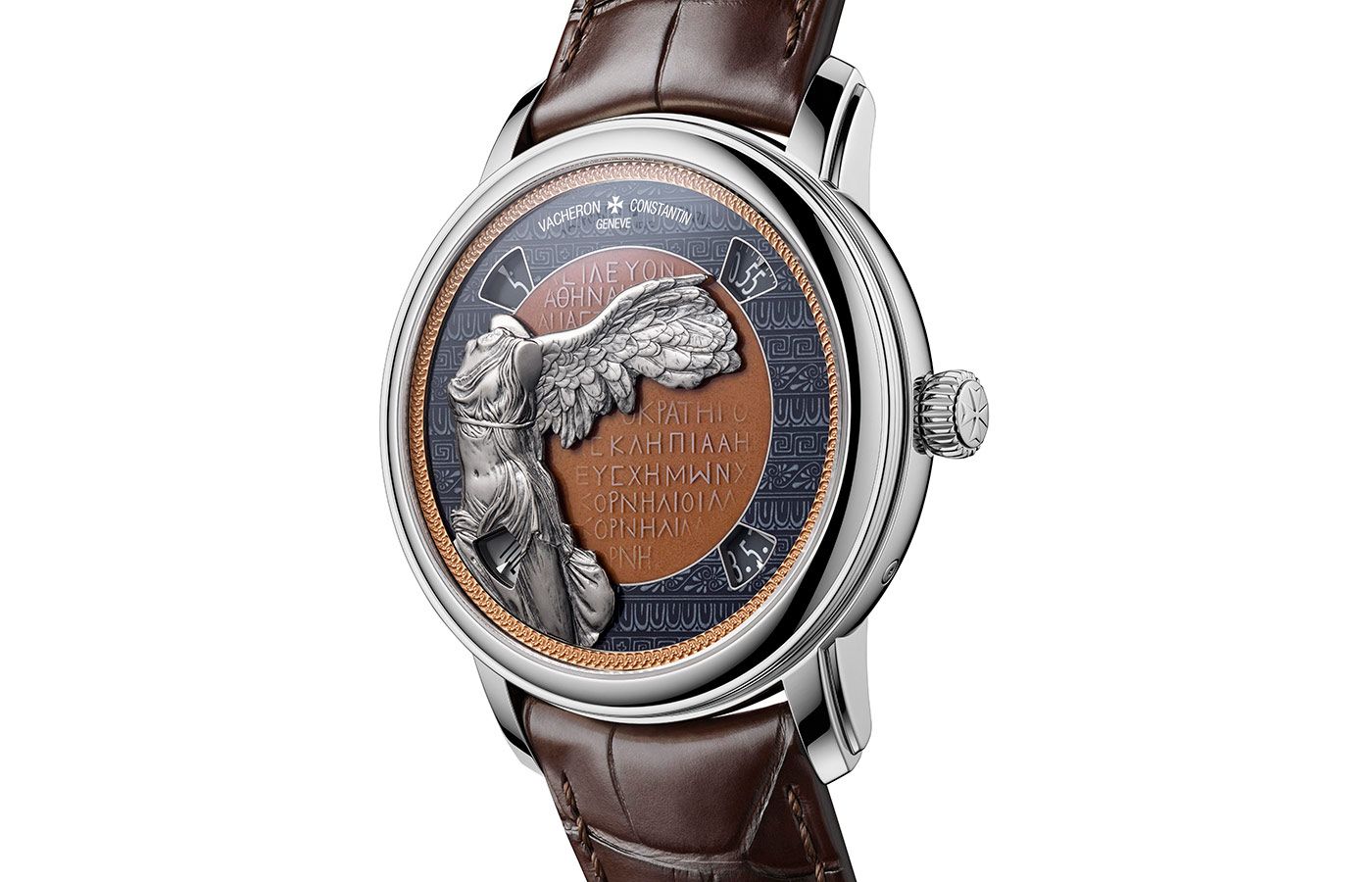 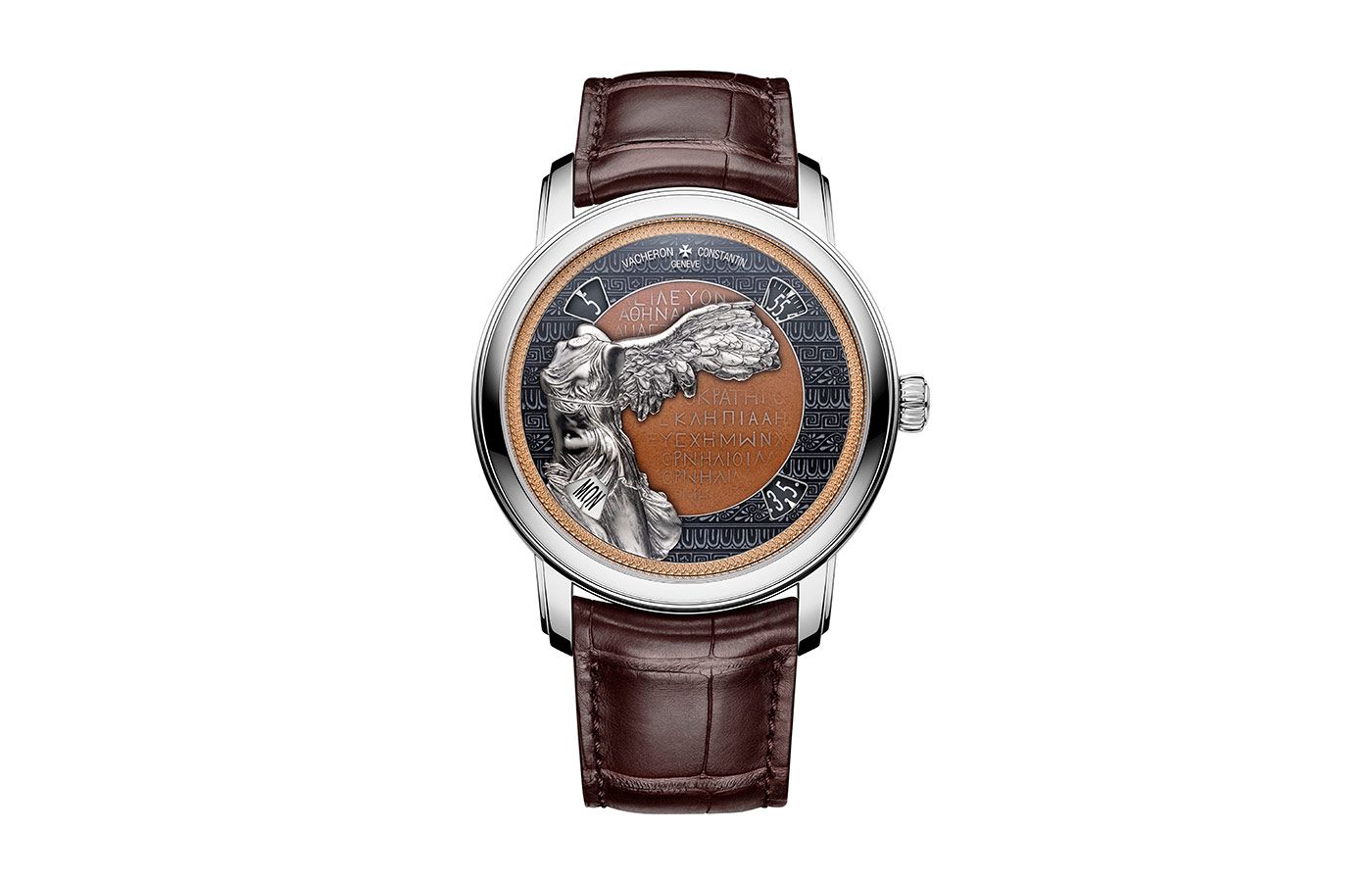 After much deliberation, the model most suitable to recreate these historic artworks was chosen. Vacheron Constantin’s self-winding Manufacture Calibre 2460 G4/2 features four windows to indicate the date, day, minute and hour. Symmetrically positioned with minimal surface interruption, the Maison decided that this dial would be the perfect mini-canvas to best represent these works through sculptured appliques and enamel work. 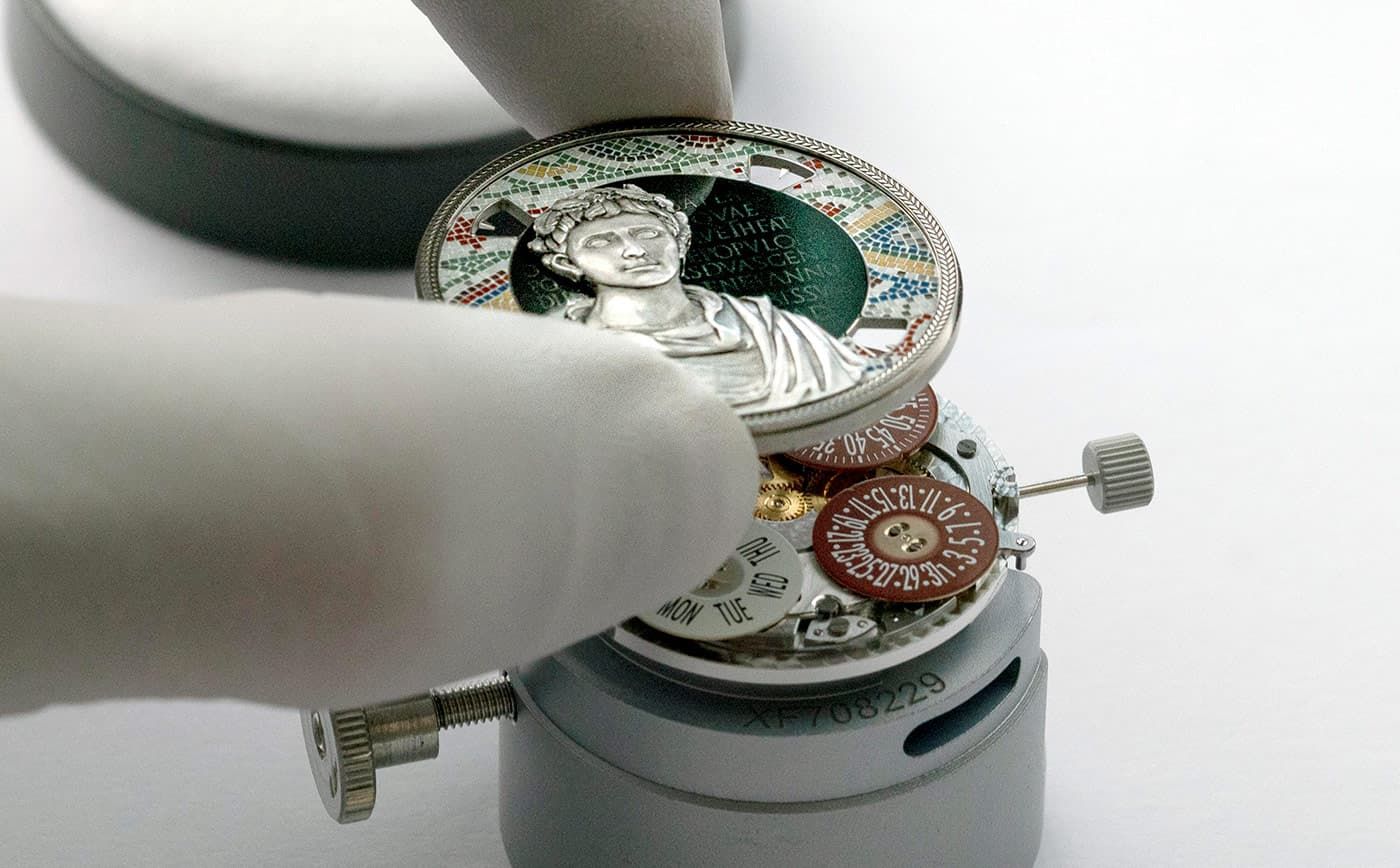 The Sphinx dial is created from a mixture of blue and black enamel, the final colour of which can only be obtained after six firings in the kiln. For the Lions de Darius, the original artefact was made of siliceous glazed bricks bound with lime mortar. To recreate this glossy look, the Vacheron Constantin artisans chose to work with stone marquetry, to accentuate the realistic look of the lion whilst honouring the original material. The centre of the Greek goddess dial is hand-painted with brown enamel, a colour that is perhaps understated in appearance but is surprisingly difficult to create. A very specific mixture of rare enamel hues that are no longer produced was needed to create this specific shade. Finally, creating the hard stone enamelling used to depict Augustus was a risky endeavour; any error in positioning the hard stone fragments or the glue beneath would require re-enamelling the entire dial base. 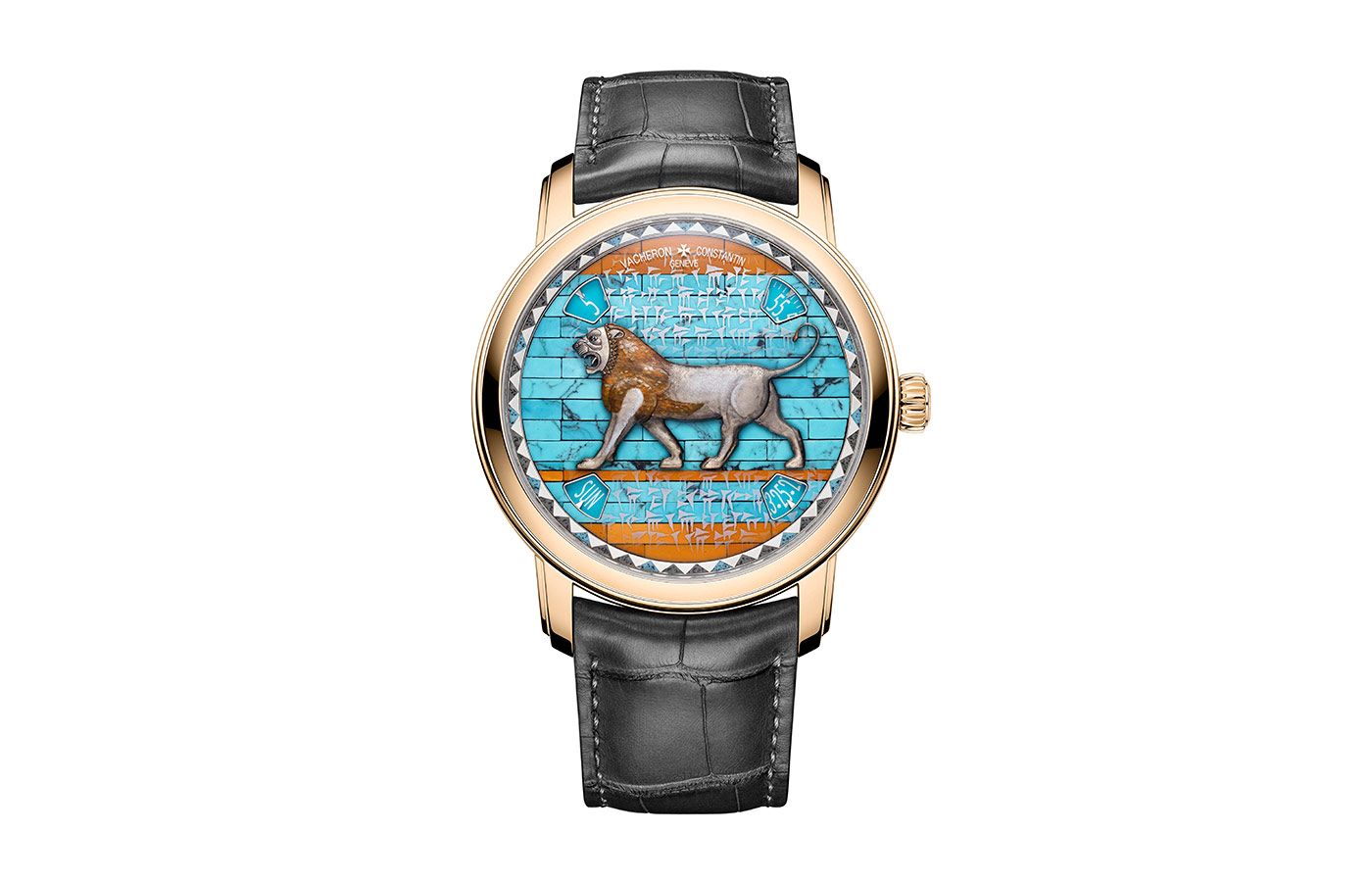 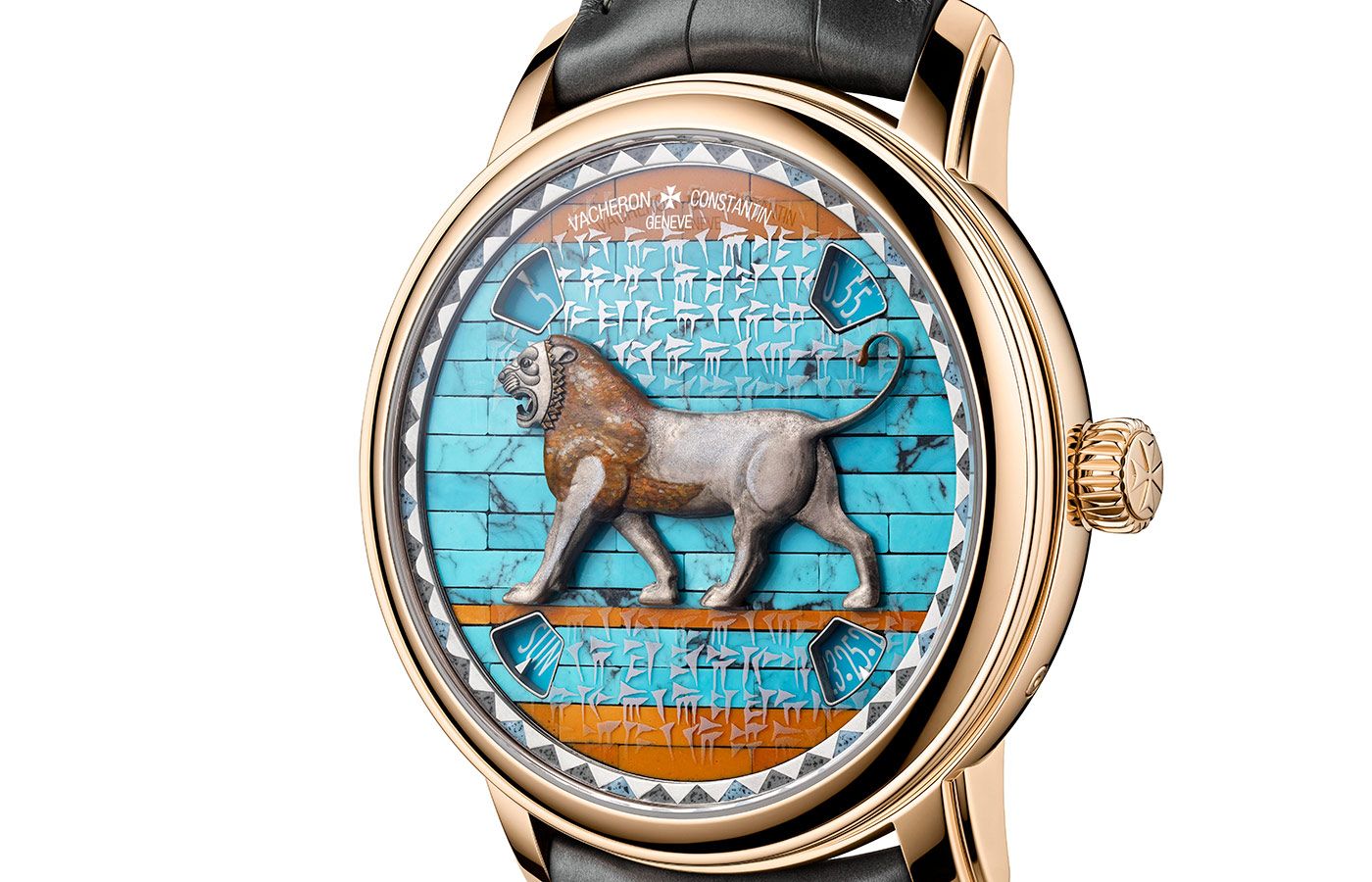 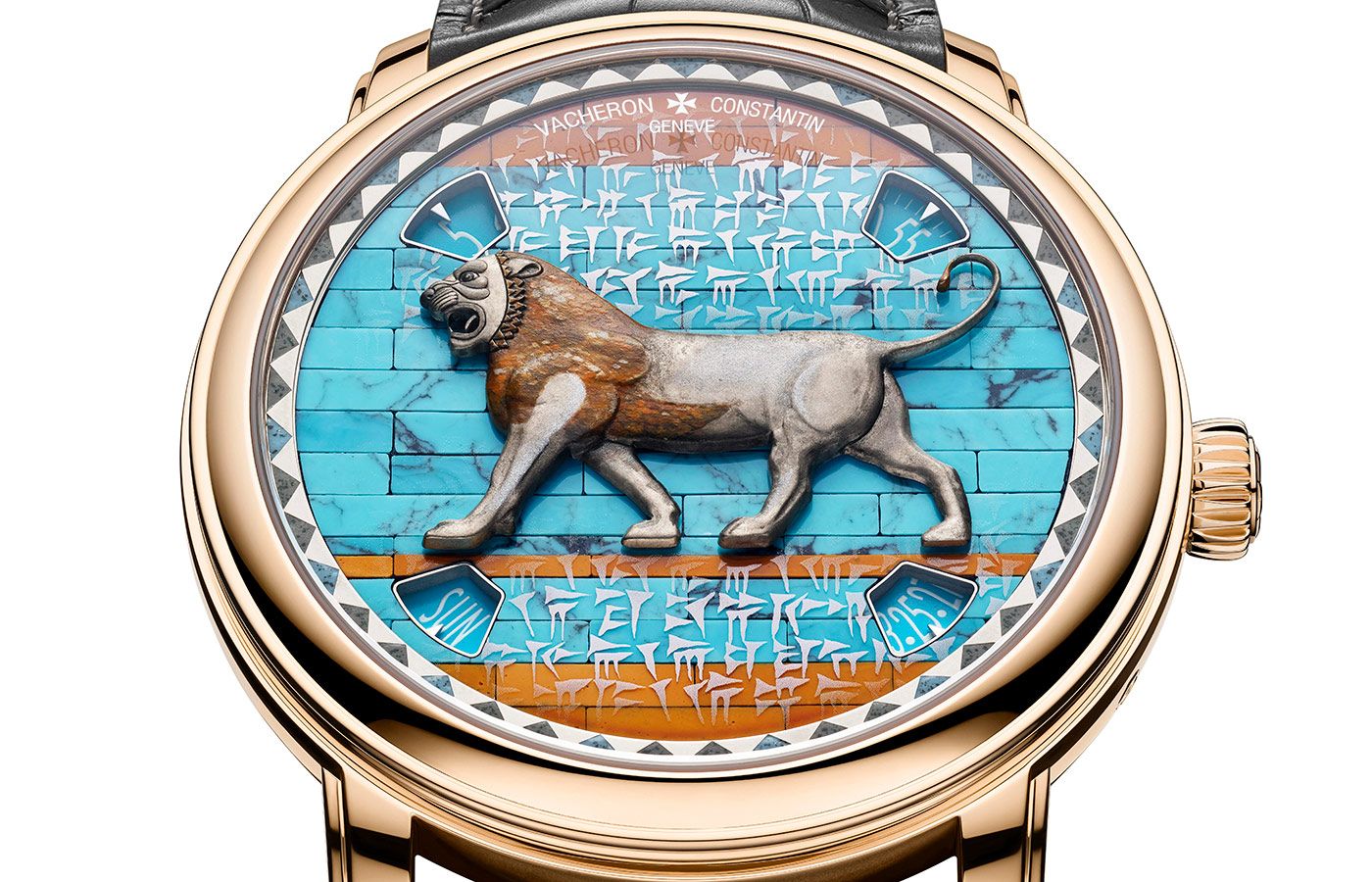 Limited at just five pieces per theme, these timepieces are a reminder that watchmaking is more than just a technical art form. Much like a famous painting or an important historic artefact, a watch dial can fuel a desire to know more. We look forward to seeing what the next collaboration will be between Vacheron Constantin and the Louvre Museum.