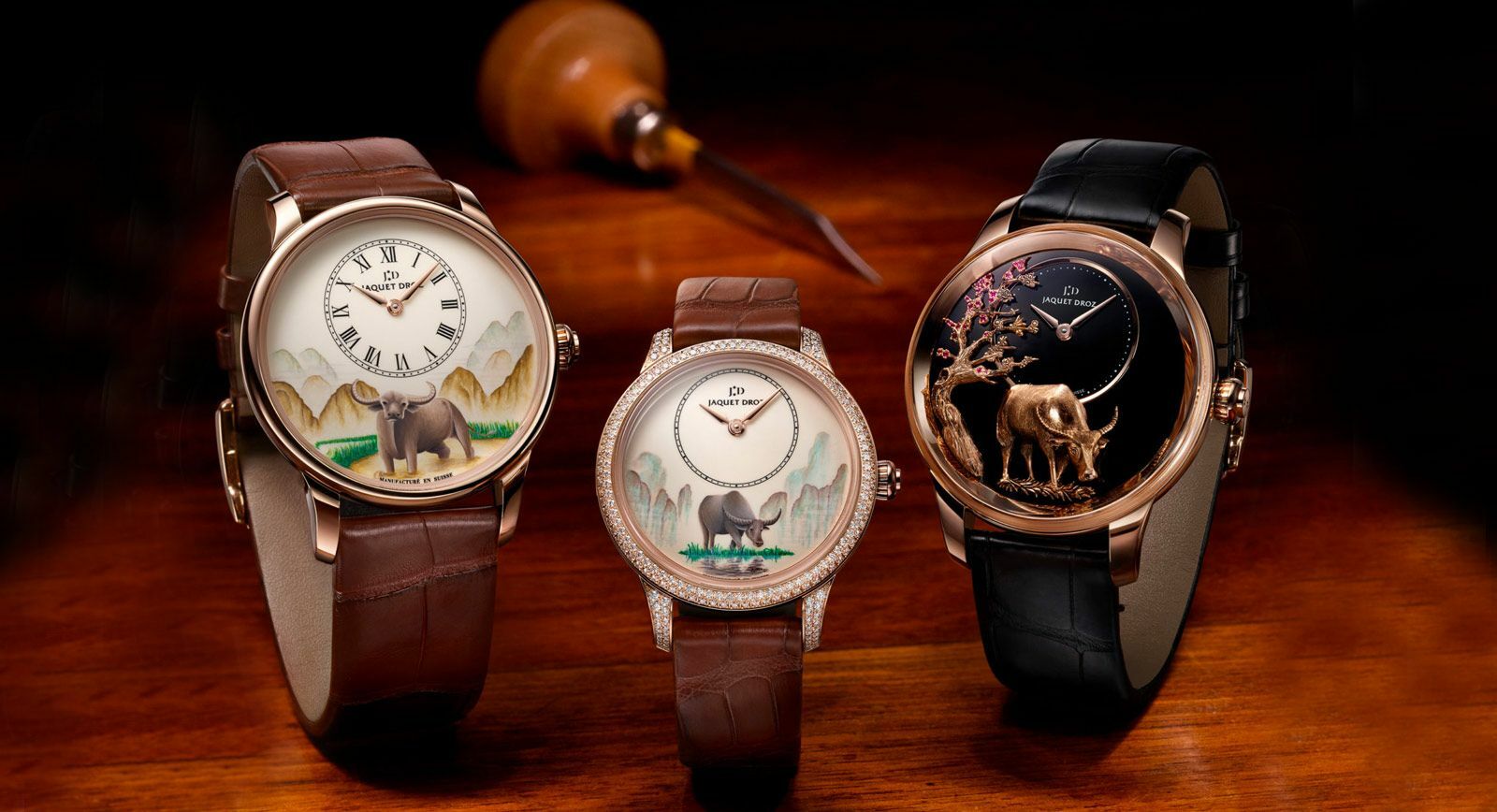 Year of the Ox: Watches to count down to Chinese New Year

The humble ox is the second animal of the Zodiac and is said to embody the qualities of hard work, positivity, and honesty. Its reliability and demure persona, never demanding the attention of the Tiger or the Dragon, for example, has encouraged brands to take their Chinese New Year timepieces in a new direction this year. If the oxen denotes a calm, steady and robust personality, perhaps these watches are destined for the wrists of equally inspiring individuals, each with their own quiet determination.

The Chinese New Year brings with it a new phase in the lunar calendar and, as tradition ensures, one of 12 Zodiac animals to represent the year ahead. 2021 heralds the ‘Year of the Ox’, which has in-turn inspired a plethora of watch brands to reimagine the beast in the form of enamel, diamonds, miniature paintings, and engraved metals. Here, I’ve chosen some creative interpretations of the oxen, captured on watch dials in exceptional detail, that can add a touch of luxury to the Chinese New Year, starting on Friday, February 12th. 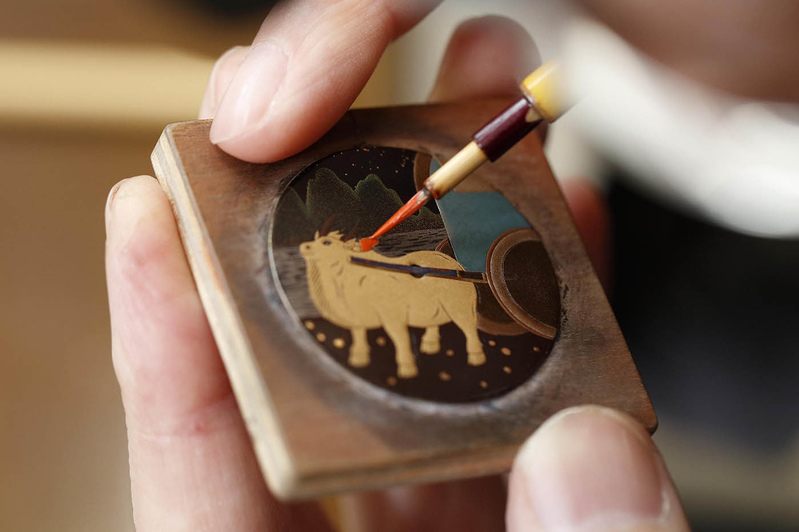 The image of a mighty oxen beneath a moonlit sky was the inspiration behind Arnold & Son’s impeccable timepiece, which has been created in an eight-piece limited series. The watch features a luminous moon phase, crafted in mother of pearl and coated with Super-LumiNova, atop a silver-speckled hematite gemstone dial for strong contrast. Of course, the star of the show is the oxen, shining in yellow gold at the 6 o’clock position, which is actually a miniature sculpture as opposed to a two-dimensional form. The timepiece is completed with an alligator-leather strap, a rose gold case and hand-painted pagodas as a further nod to its Chinese New Year inspirations. 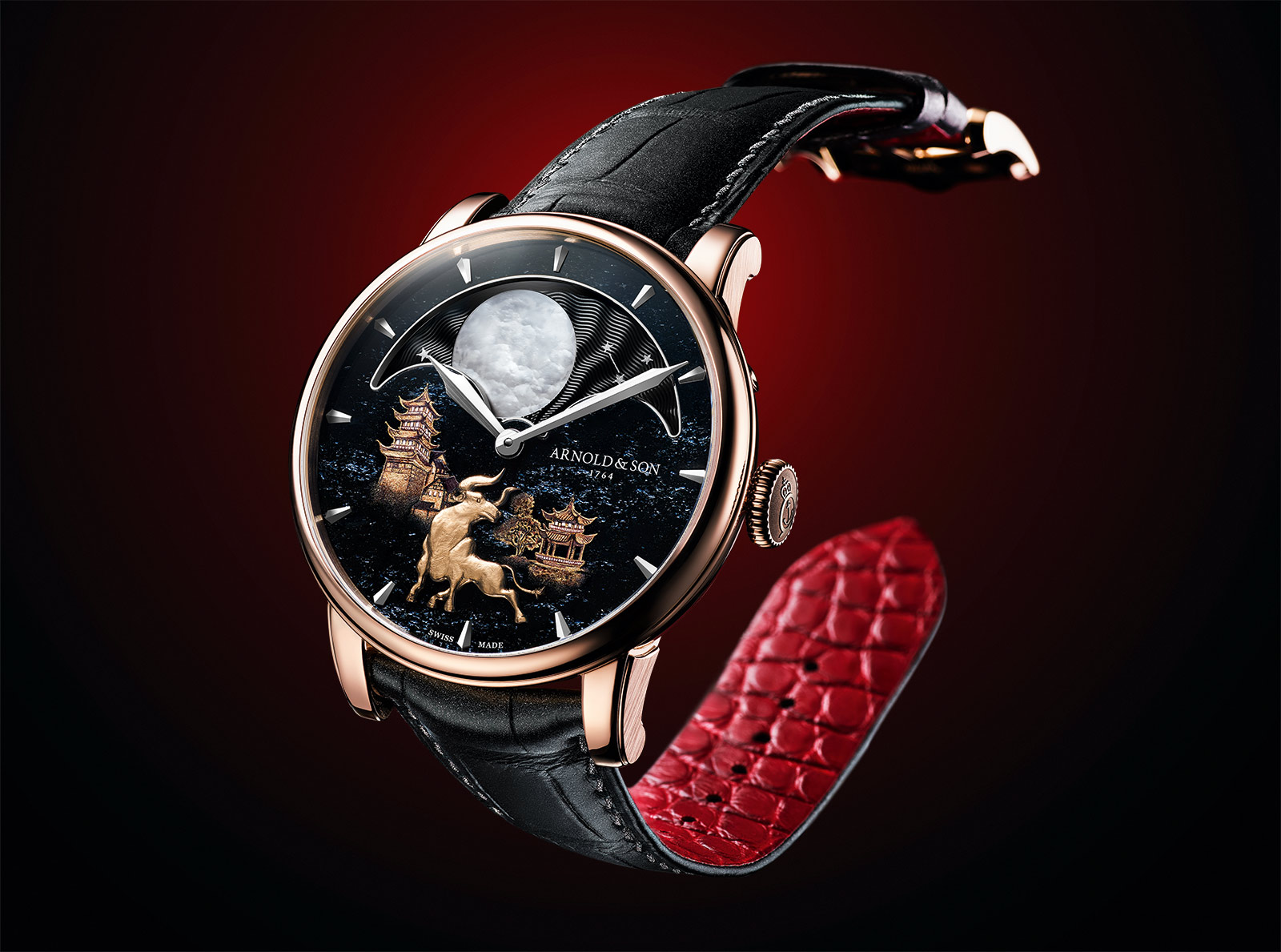 Determined to shine a spotlight on the majesty of the oxen, Harry Winston has interpreted the beast in its own glamorous style with a red mother of pearl dial and two different finishes – a naturally iridescent top half and an etched landscape of rolling hills at the bottom. Standing proudly at the centre of the piece is a horned ox, brought to life in rose gold and 103 brilliant-cut diamonds, haloed by a crescent of diamonds. As a final flourish, the piece is set with a single large emerald-cut diamond at the 12 o’clock position, which rockets the total weight to 2.80 carats. Only eight pieces have been made and each one is engraved with its number on a transparent sapphire case back. 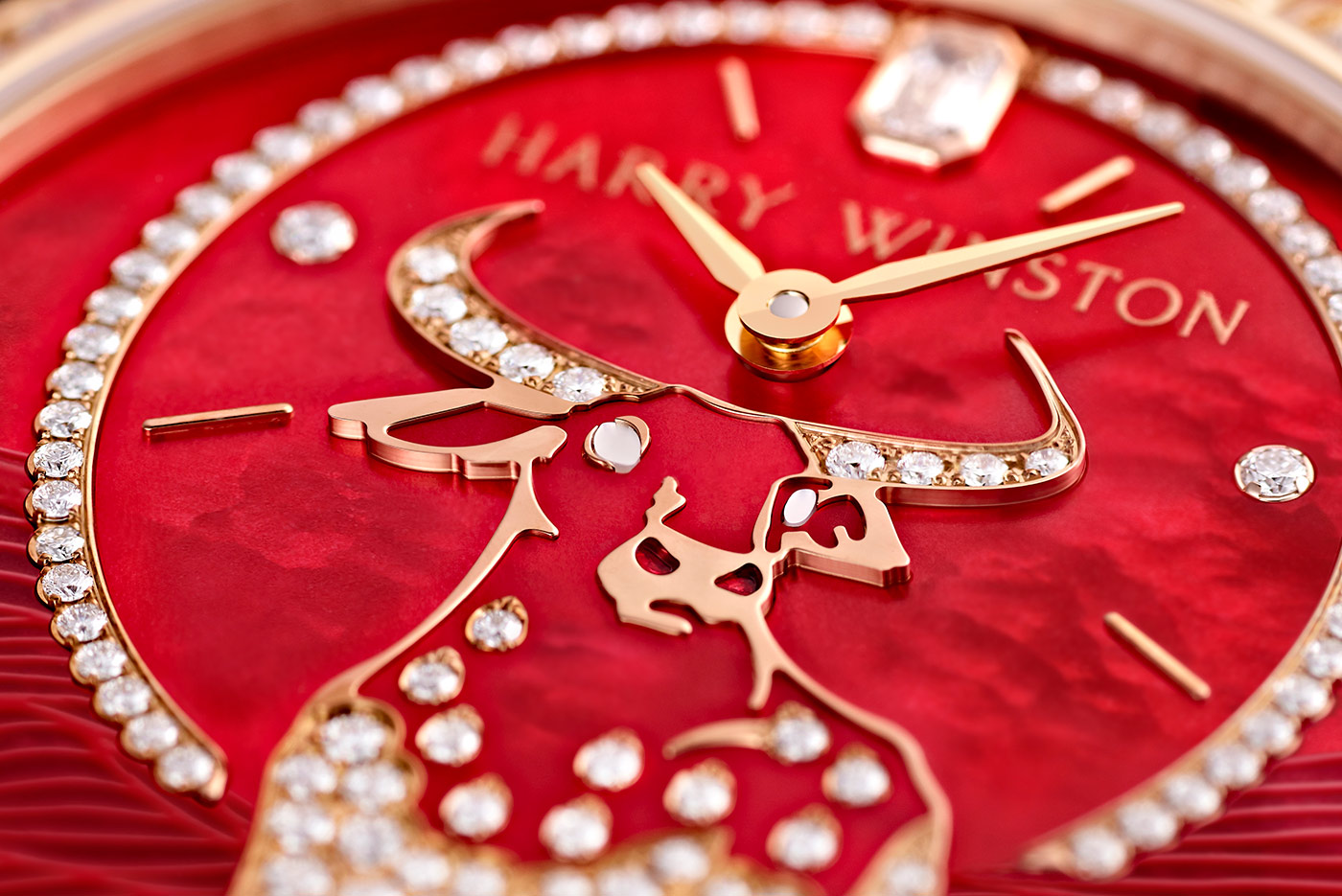 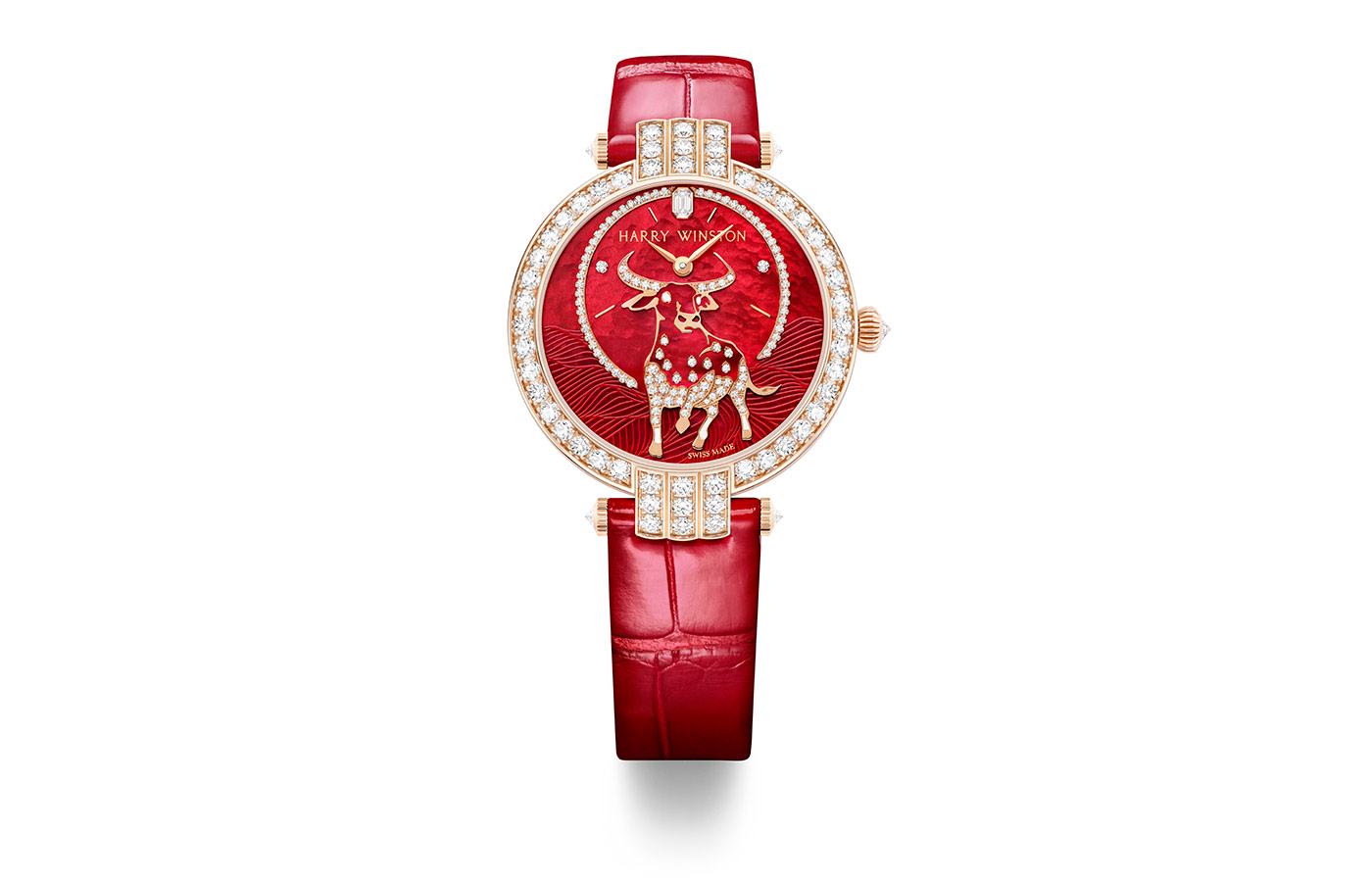 Piaget Altiplano Year of the Ox

Piaget has immortalised the ox on the dial of one of its most iconic timepieces – the ultra-thin Altiplano – using grand feu cloisonné enamel applied by the skilled hand of master-enameller, Anita Porchet. The watch is deceptively simple, with a white gold case and a shining ring of 78 brilliant-cut diamonds set in the bezel. Within is the brand’s 430P hand-wound movement that is remarkably just 2.1mm thick. Elsewhere, Piaget has continued its Chinese New Year celebrations with a new Limelight Stella Moonphase watch in shades of rose gold and coral red with diamond-set constellation details. 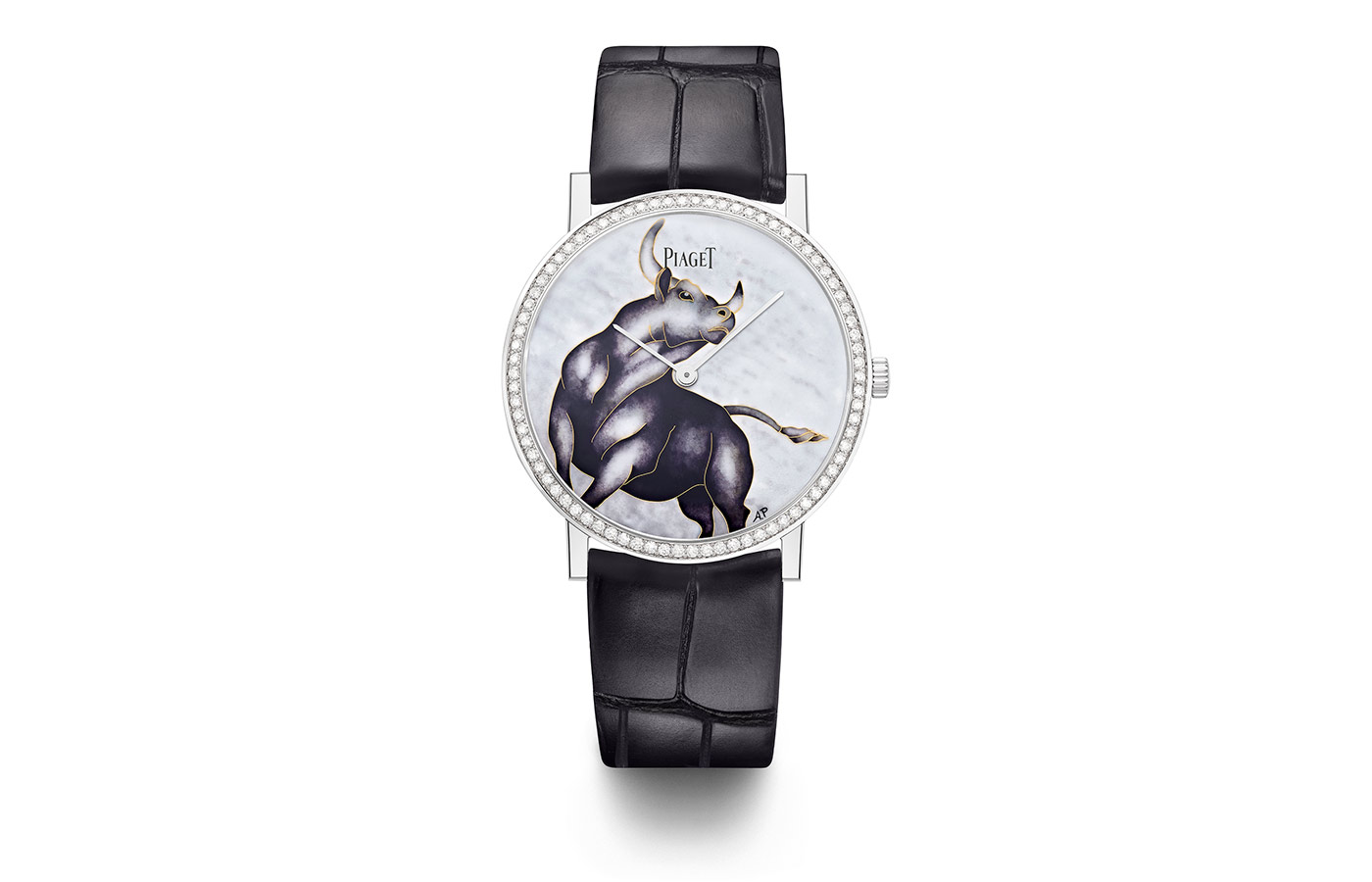 With two colourways to choose from, Vacheron Constantin has created a beautifully detailed homage to the oxen while continuing the traditions laid out in its ‘Legend of the Chinese Zodiac’ series. A quartet of apertures, calendar, day of the week, hours and minutes, create a frame around the three-dimensional animal at the heart of the watch, which is minutely engraved to create the impression of fur, movement and power all at once. The ox is surrounded by grand feu enamelled flowers, leaves and vines, which are delicate in contrast to the animal itself. The only decision one has to make is between the two colour palettes of platinum and deep blue or rose gold and burnt orange. 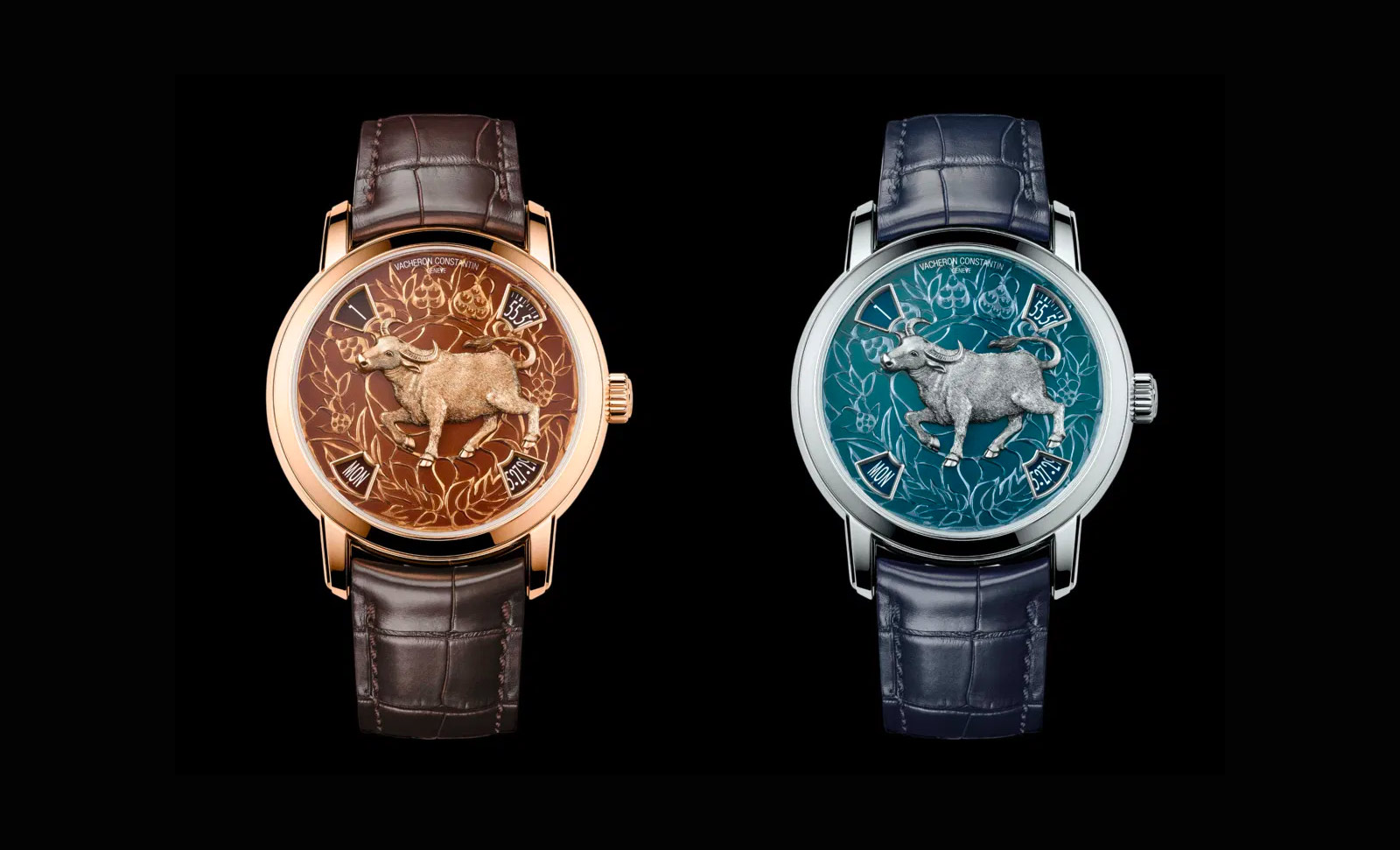 The past and the present combine in this Chines New Year timepiece by Chopard, which looks as if an ancient drawing has been unearthed and carefully captured on a watch dial for a new generation. The scene is painted in urushi lacquer – a combination of lacquer and gold powder – by master artisan Minori Koizumi in the century-old workshops of Japan’s Yamada Heiando company. The ox is pulling a decorative cart across stony ground under a night sky, which has a certain romance all in itself. Where is it going? Who is it transporting? In this way, Chopard has managed to tell a tantalising story without the fanfare of diamonds captured for generations to come in a frame of rose gold. 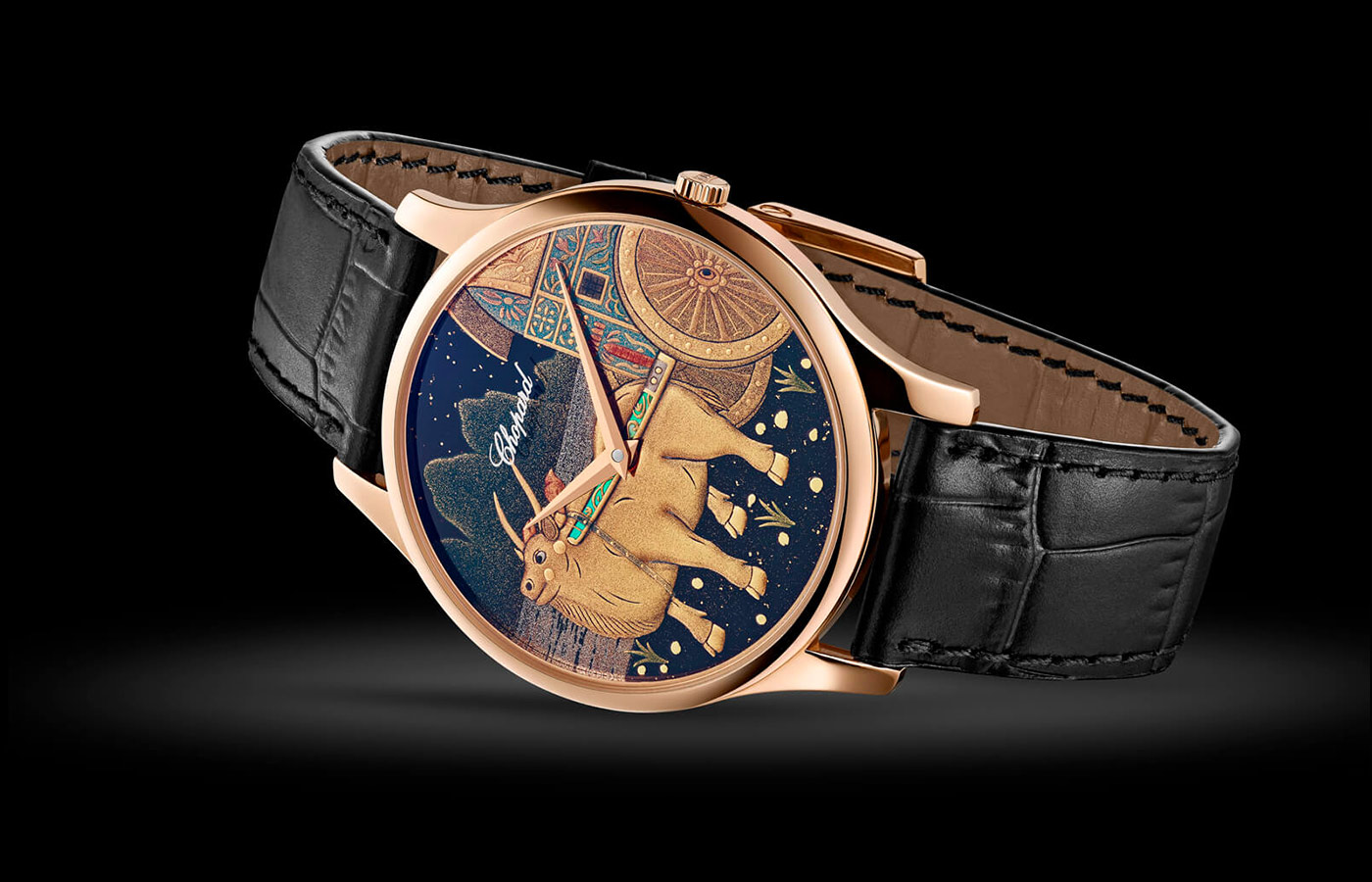 Not one to be outdone, Jaquet Droz has created four ox themed Petite Heure Minute timepieces this year: two crafted in red gold with or without diamonds, and a further design in either white or red gold. The former focuses on an ox grazing against a backdrop of mist-covered mountains, hand-painted in miniature on a white grand feu enamel dial to capture the animals calm, reliable and humble nature. The latter style is a little more ostentatious, with an ox engraved in gold relief against a black onyx dial. Behind the animal is a golden plum tree, dotted with ruby gemstone fruits. Interestingly, the Jaquet-Droz family can trace its history with the Chinese Imperial Court back to the 18th century when it exported hundreds of pieces and automaton watches to China and its leaders. This year’s Zodiac inspired pieces highlight many skills the house is known for, including miniature painting, gem-setting, gold appliqué, hand-engraving and relief engraving. 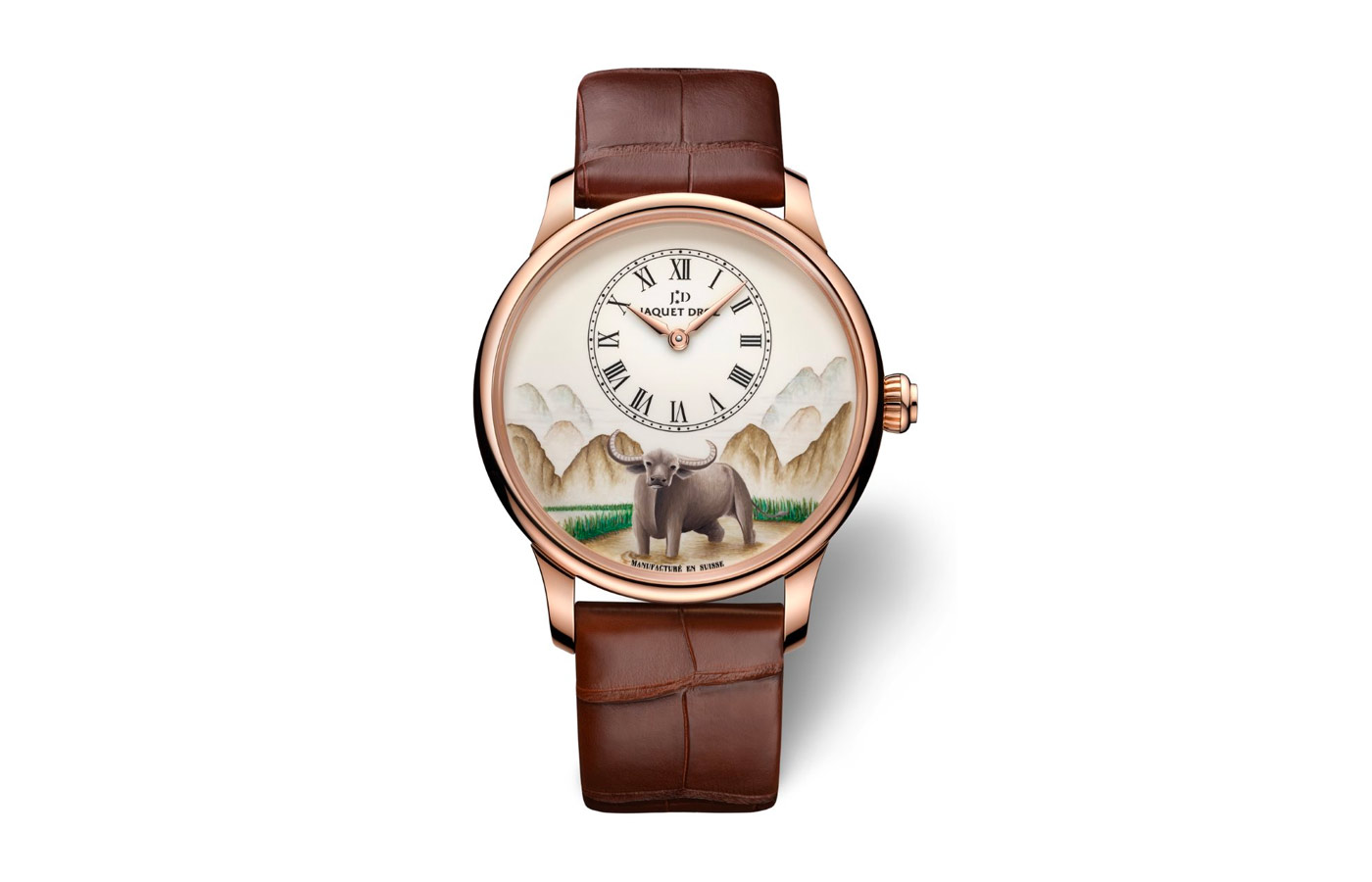 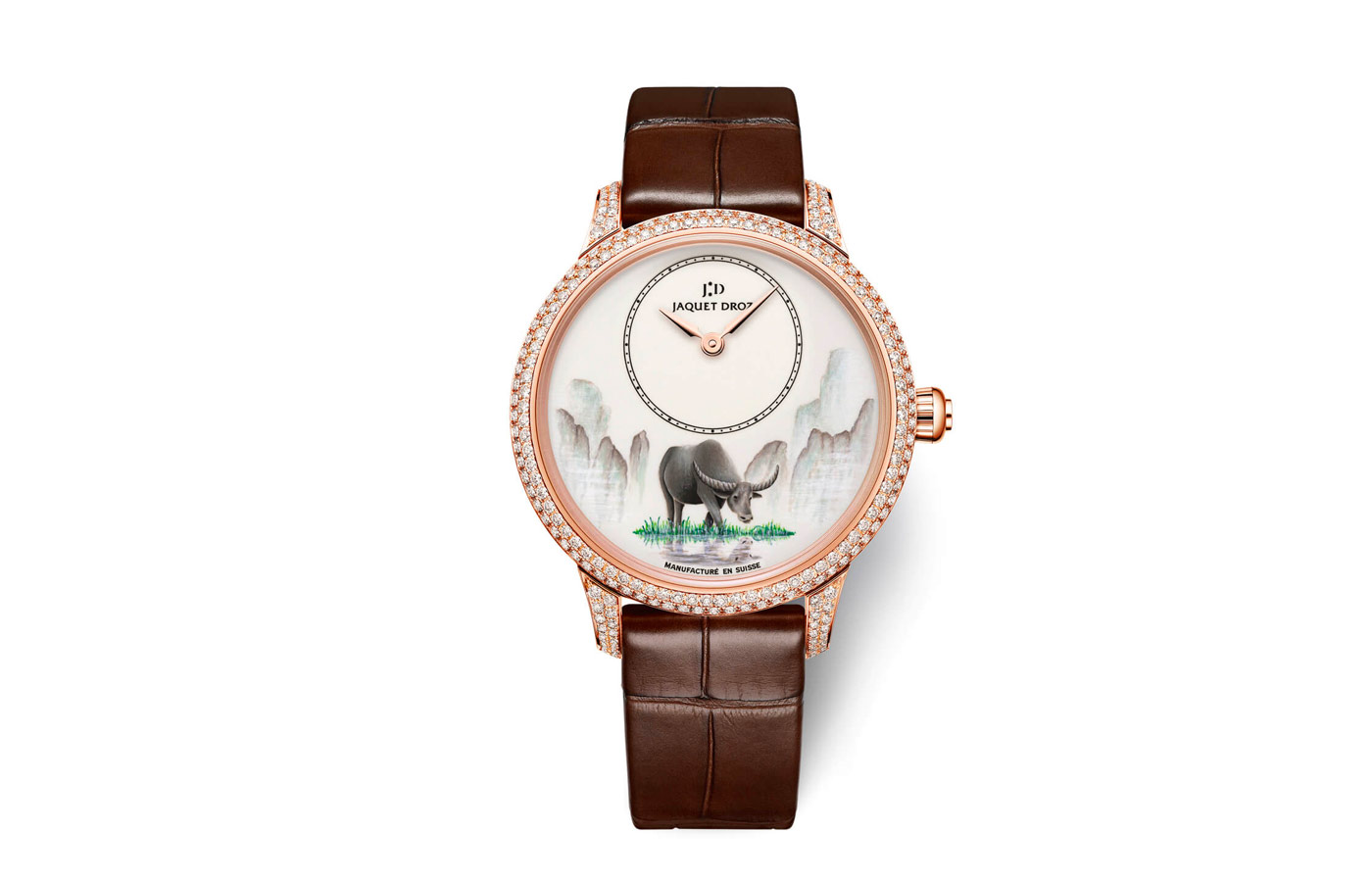 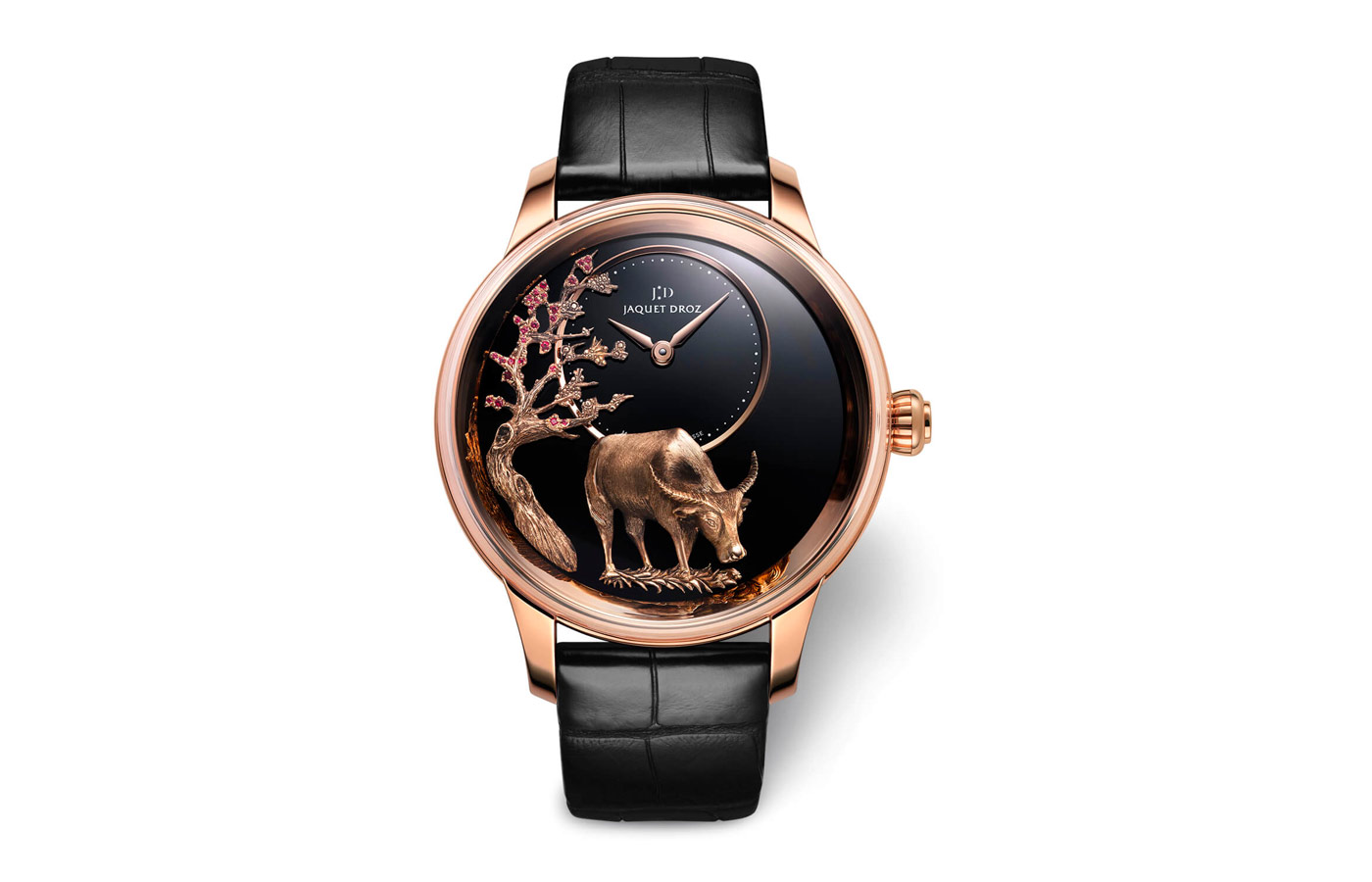 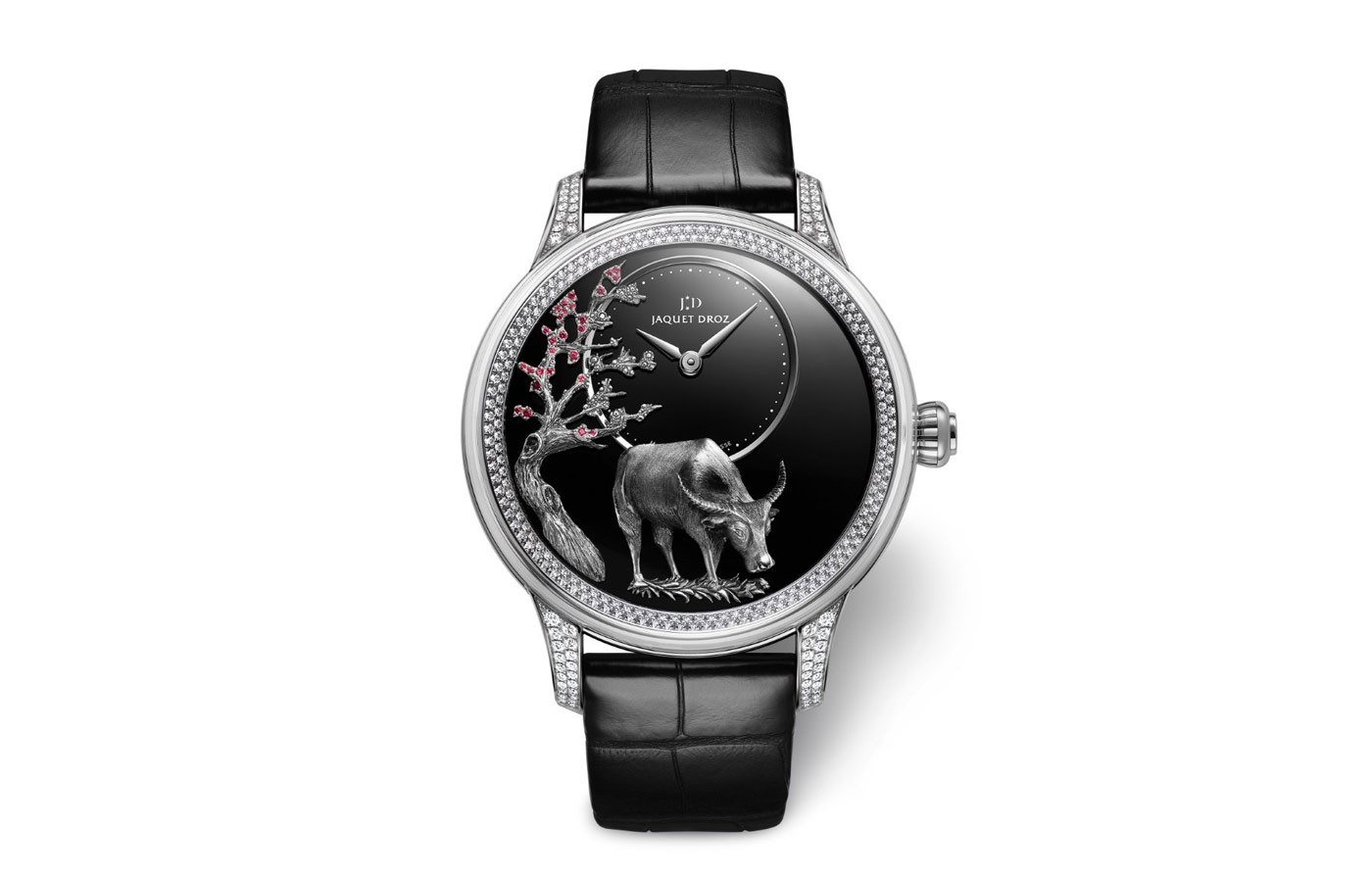 If you are fortunate enough to enhance your watch collection with an ox-inspired timepiece in 2021, you may also look ahead to next year, when the ‘Year of the Tiger’ will no doubt result in a flourish of daring designs with the extravagance and fiery hues this big cat demands.