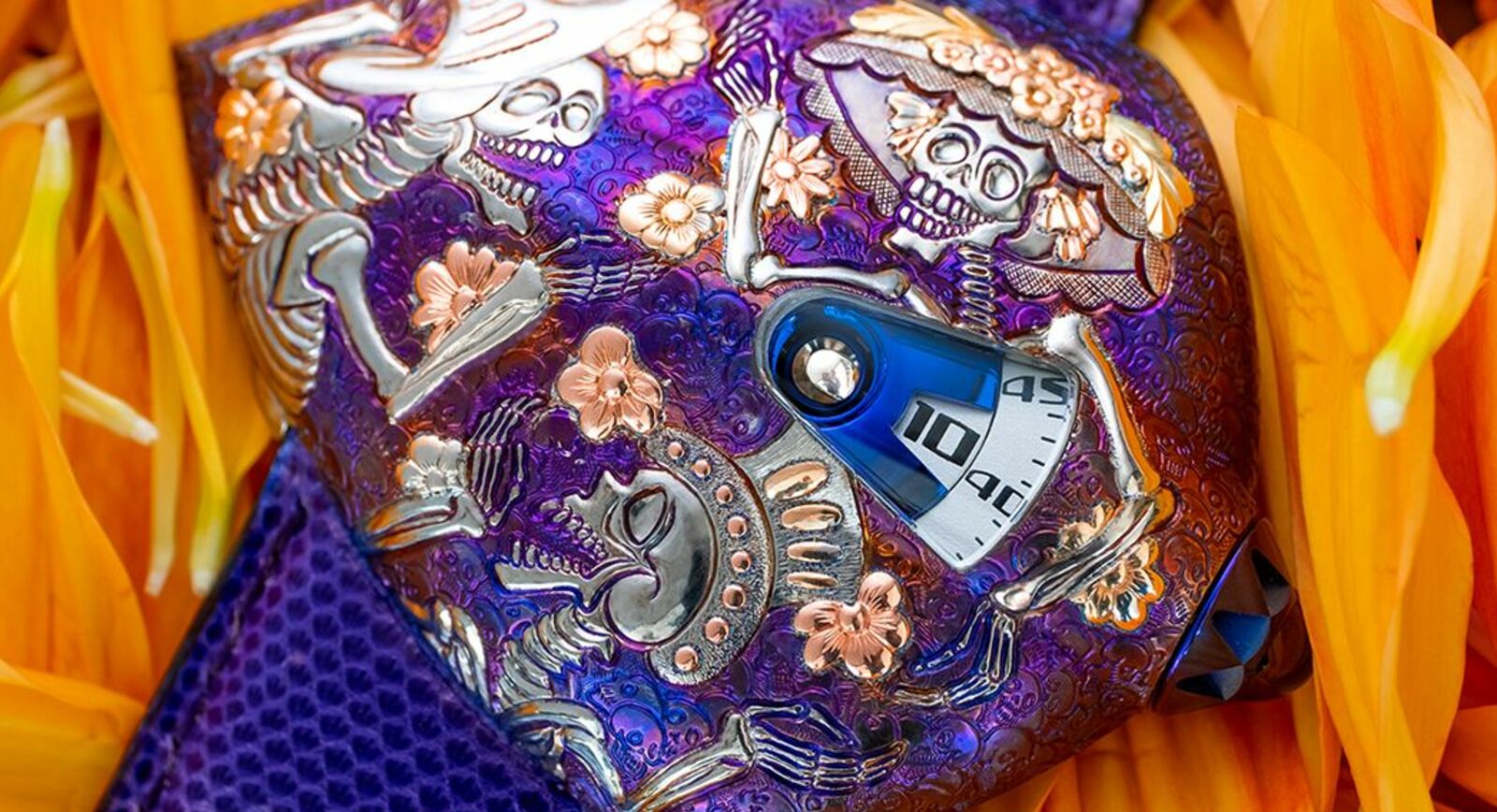 Wild Times: The Whackiest Watches of 2020

Thinking outside the box is something that certain watchmakers do very well indeed and by doing so they have carved a niche for themselves as creators of some of the most unconventional timepieces on the market. It is one thing to admire a watch for the complexity of its complication, quite another to be blown away by the sheer audacity of its design. Enjoy getting to know five of the whackiest watches of 2020 – timepieces that present a radically different perspective on timekeeping.

Inspired by the Day of the Dead, a Mexican holiday during which friends and family members who have passed away are remembered and honoured, Christophe Claret's avant-garde X-Trem -1 Calavera watch features a diamond skull positioned between a most novel rendition of a dial. Part of Christophe Claret’s Extreme Complications collection, the X-TREM-1 tells the time using a system whereby two small steel spheres – hollowed to make them lighter and encased within tubes placed to the right and left of the case band – are controlled by precision magnetic fields generated by two miniature magnets moved by cables. While the mechanics of this movement are mind-blowingly complex – the cables on which the magnets move are thinner than a human hair – the overall effect is remarkably serene, with the floating red and green spheres moving up the tubes as time passes, creating pure horological magic. Crafted out of ultra-light black grade 5 PVD titanium, vibrant accents introduce the colours of Mexico, with the red and green steel spheres accompanied by a ruby set in the heart of the double flying tourbillon and an emerald in the centre of the skull’s forehead. 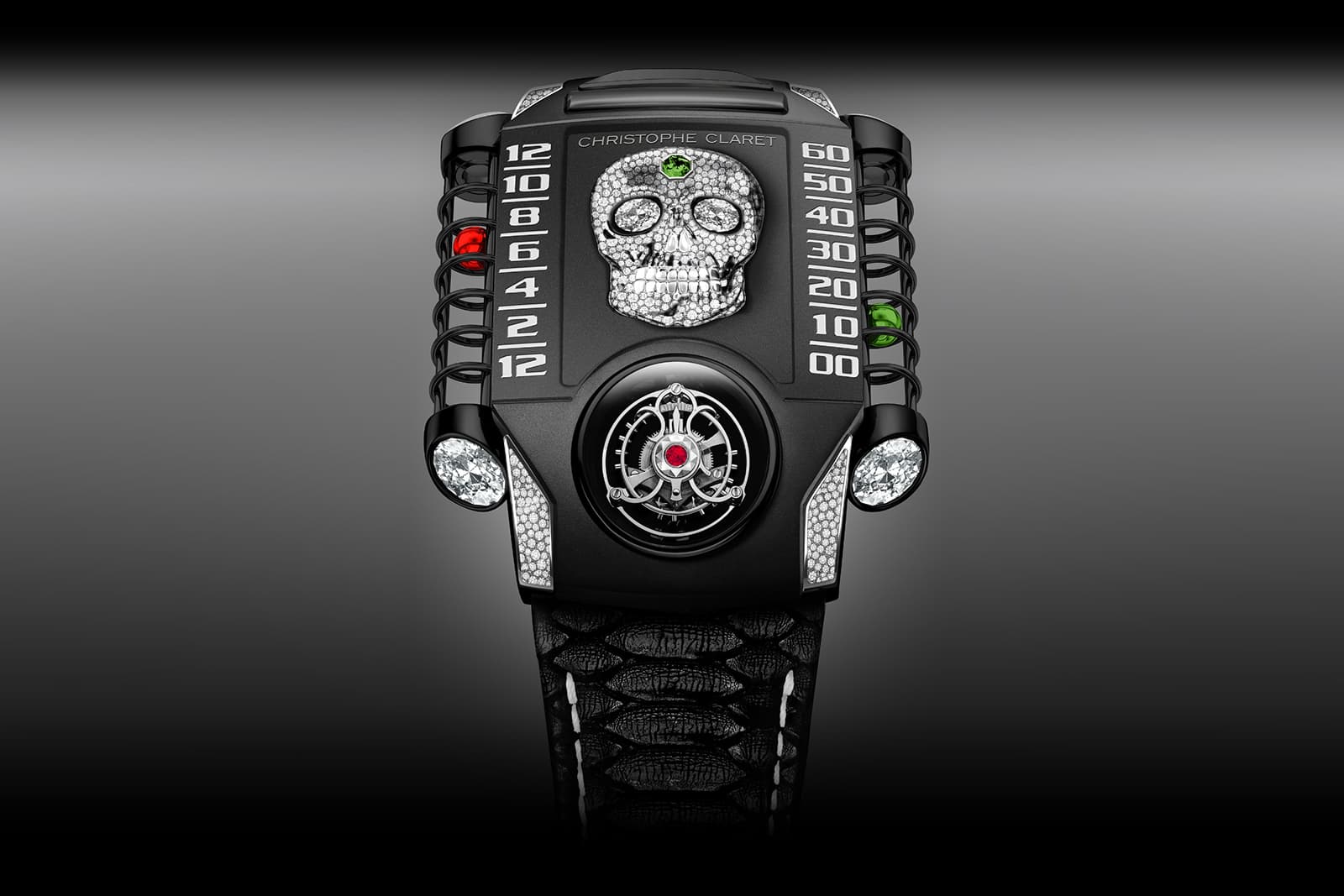 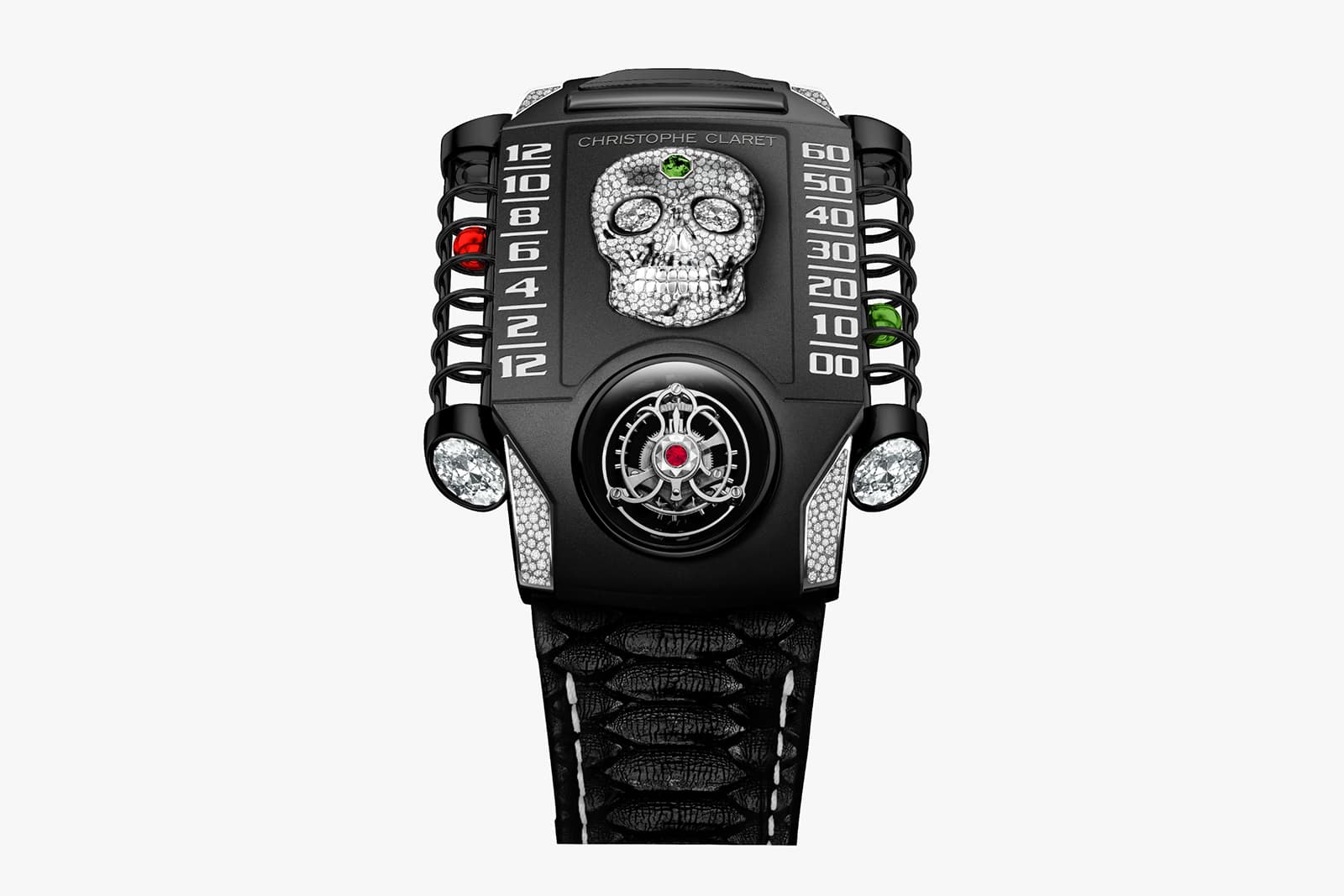 What are the chances that the Day of the Dead would inspire two unique timepieces in one year? Featuring a completely different interpretation of this Mexican tradition, for 2020 Swiss watchmaker De Bethune expands its Maestri’Art collection with the DW5 Cempasúchil – a one-of-a-kind timekeeper inspired by Mexico’s Day of the Dead celebrations. Honouring the legendary Mexican engraver José Guadalupe Posada, who is famous throughout Mexico for his humorously macabre Calaveras – engravings of smiling skulls and animated skeletons – Denis Flageollet, founder of De Bethune, commissioned Michèle Rothen, one of the top artist-engravers in Switzerland, to decorate the case of the DW5 Cempasúchil with a contemporary rendition of the Mexican artist’s own engravings. The result is three grinning, gold, hat-wearing skeletons overlaying a shimmering blued-titanium background engraved with hundreds of tiny skulls. Amongst this joyfully whacky scene, a sapphire window reveals the time in the most unusual of ways – jumping hours and analogue minutes – with a contemporary moon phase indicator composed of blued steel and palladium half-spheres. For the final flourish, when you turn the watch over a classic Calavera is revealed with huge eye sockets, through which the movement’s balance-spring can be admired. 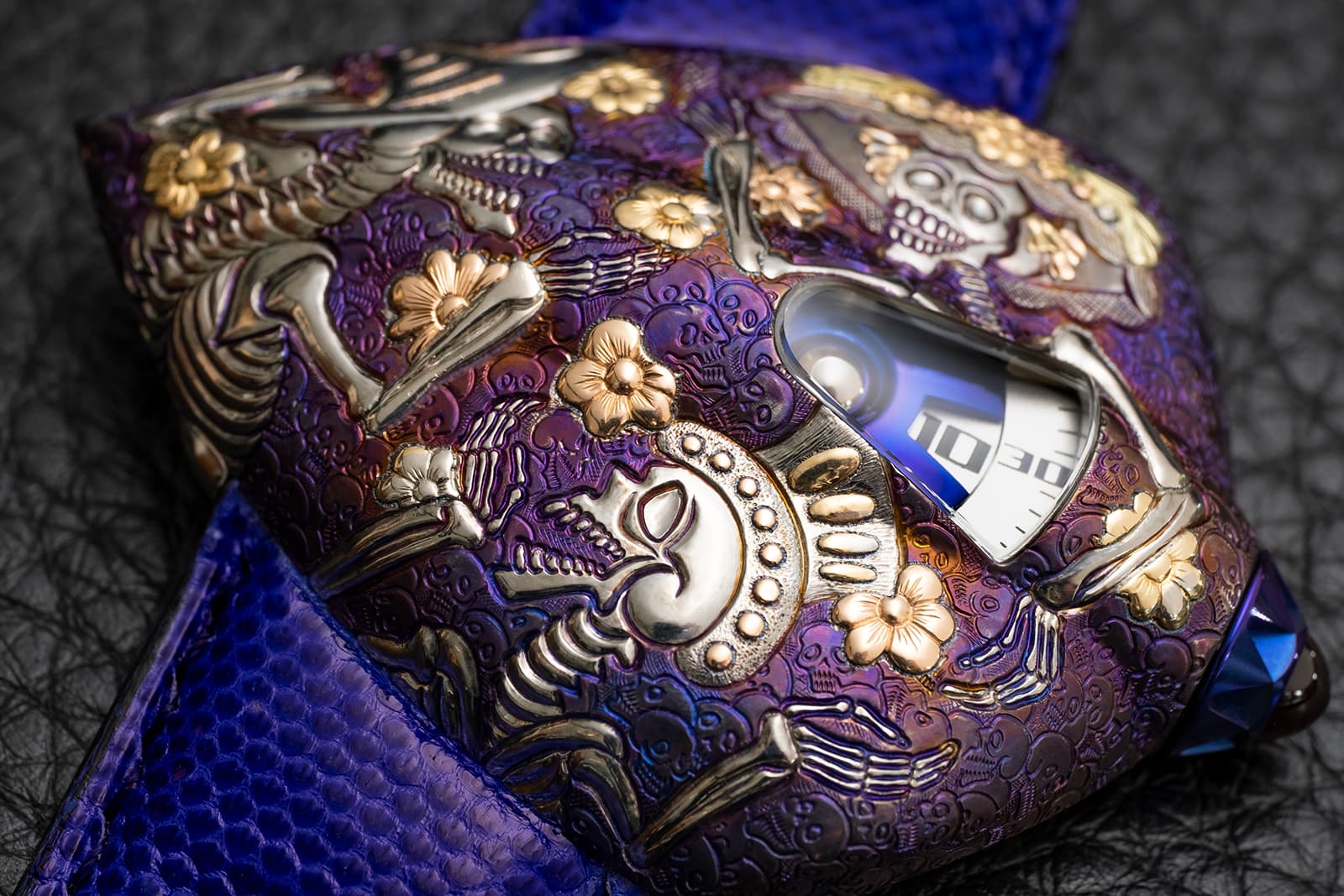 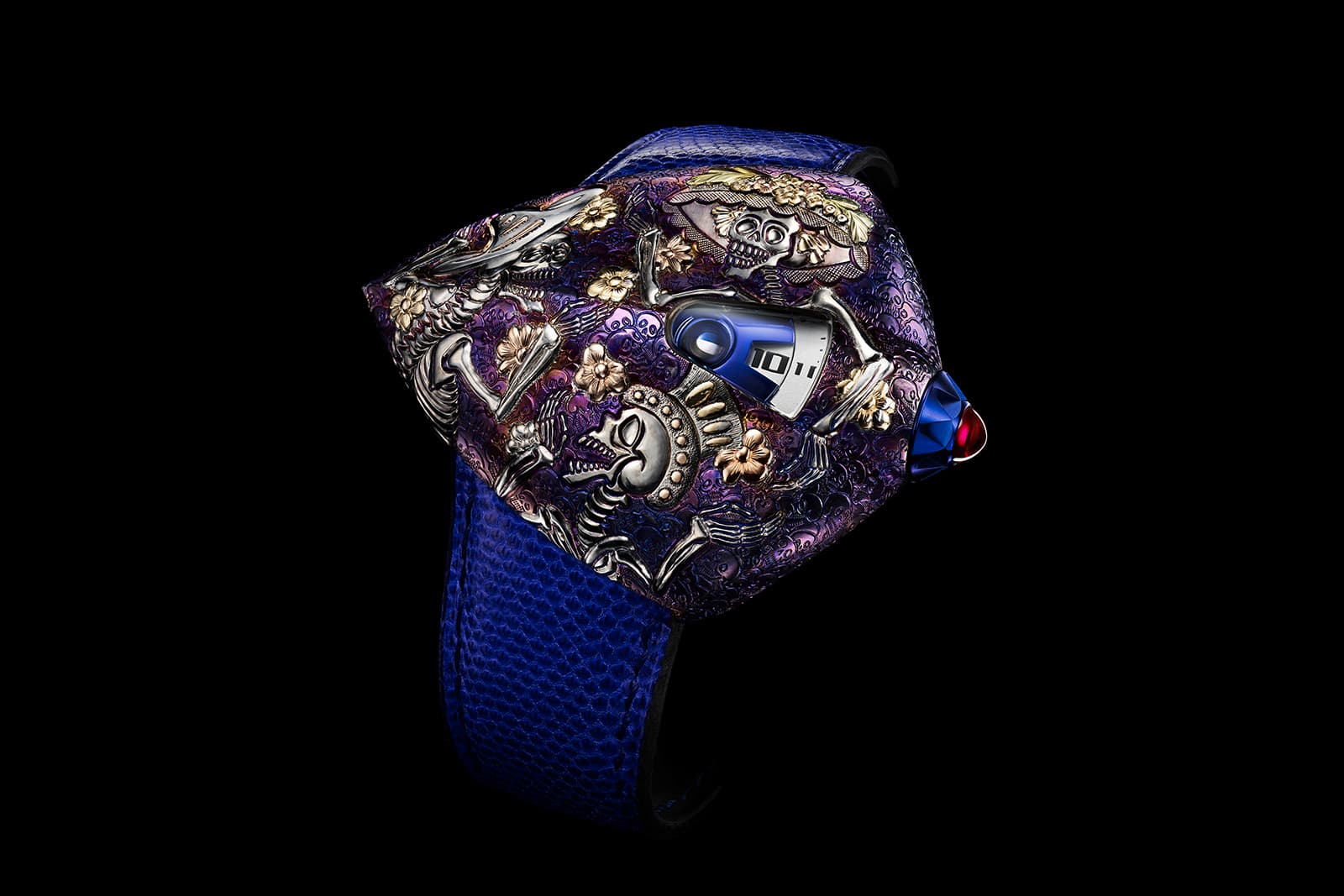 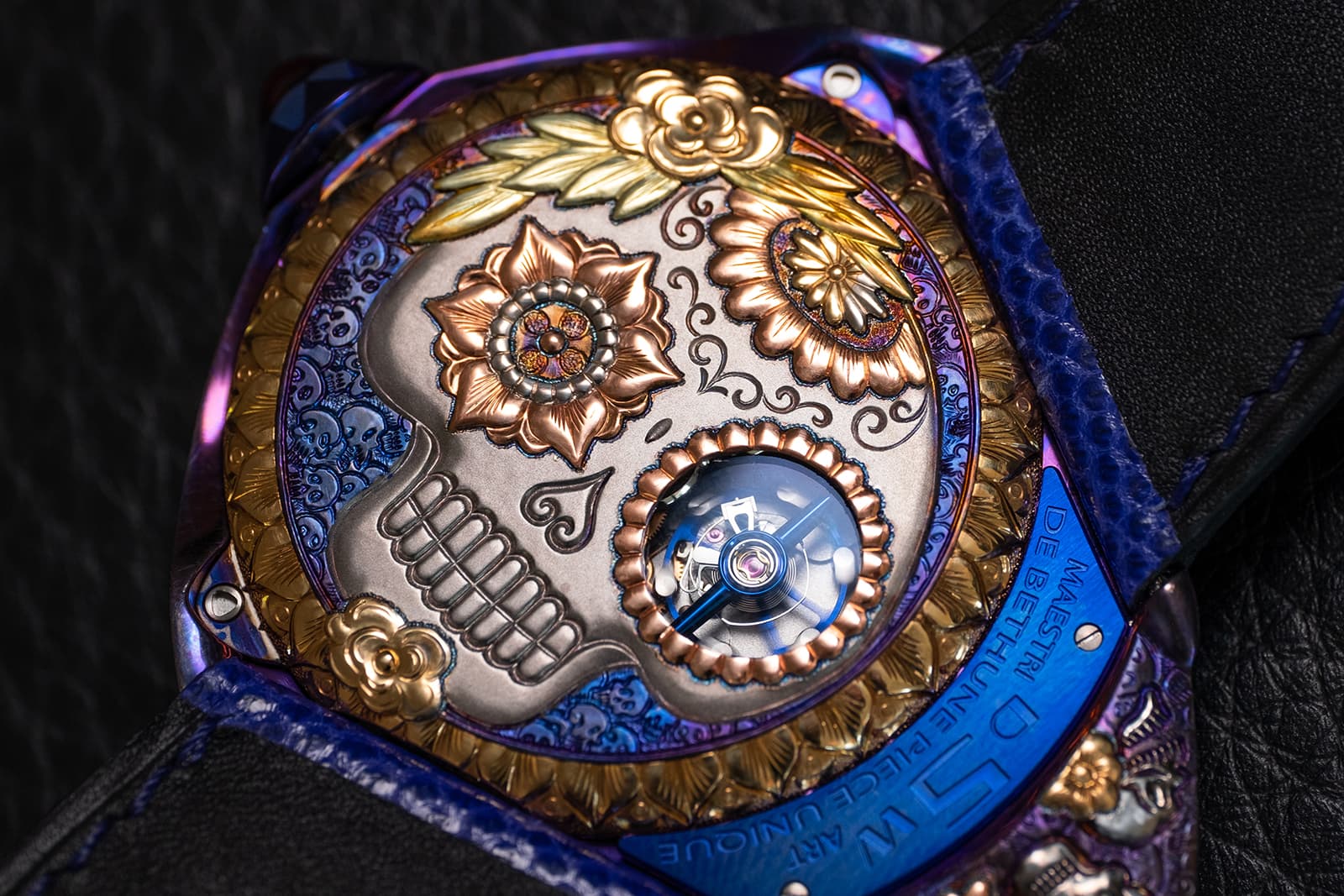 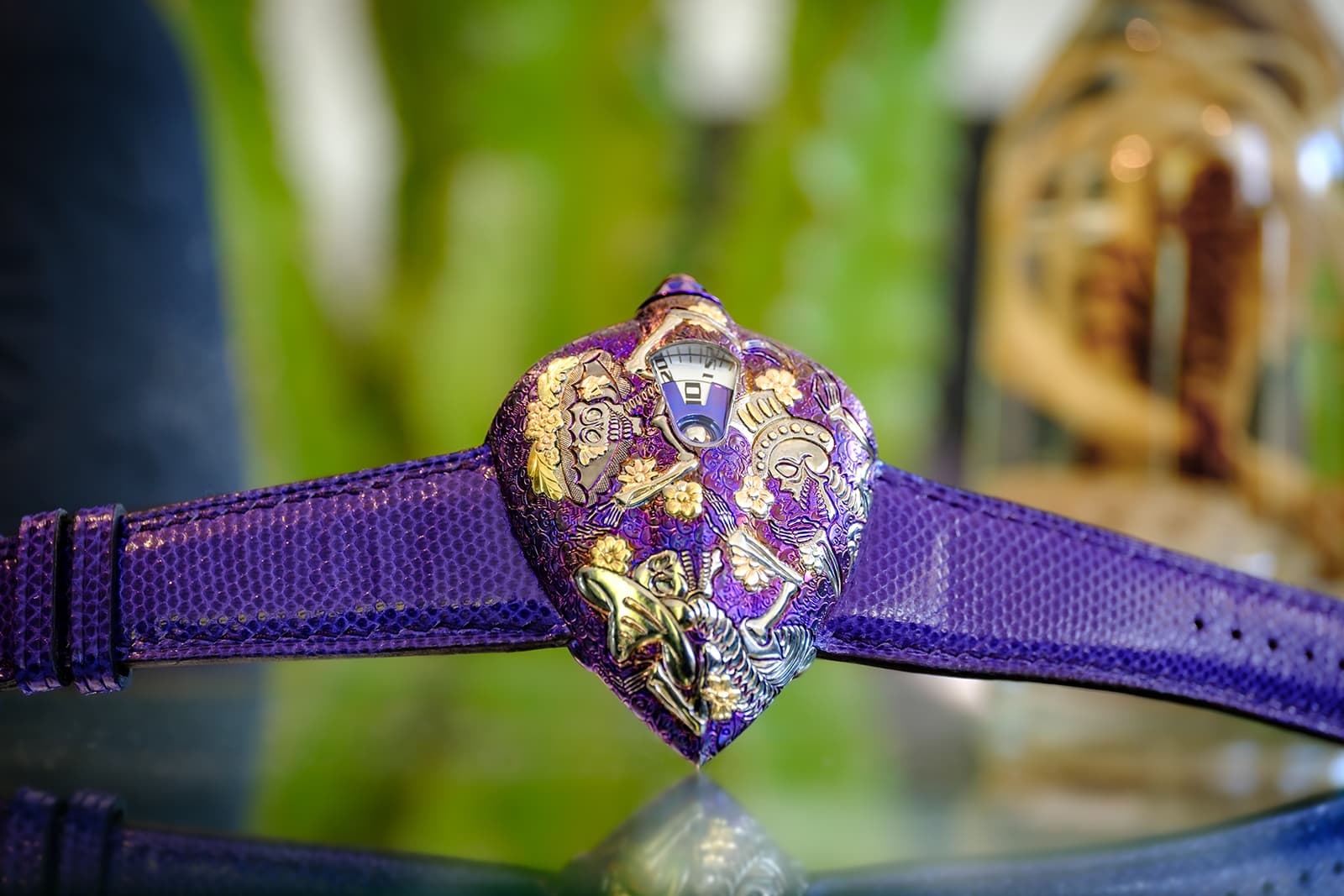 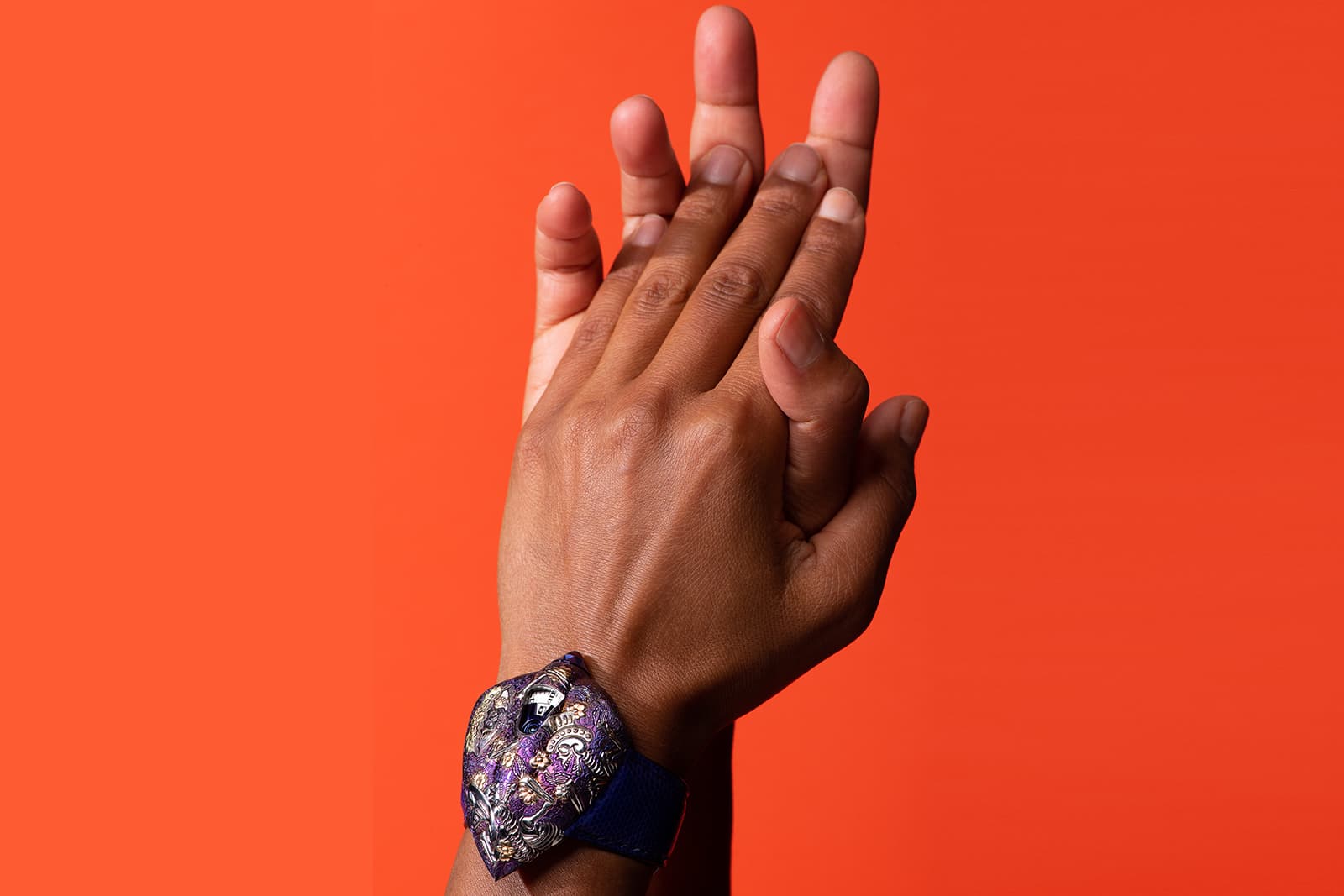 A limited-edition of eight pieces, the Soonow Instant Rainbow by HYT is the latest timepiece from the Swiss watch brand with a unique perspective on time. Featuring a skull with psychedelic eye sockets – the power reserve and seconds indicator, respectively – integrated into the Soonow Instant Rainbow is HYT’s patented micro-fluidic module, which uses liquid to tell the time. Marked with the hours, a capillary tube filled with two liquids, one transparent, the other blue, on top of a yellow SLN track traces the outline of the skull, with the yellow representative of the past and blue the future. Where the two meet is the present – the current time, in other words. It’s certainly a whacky way of telling the time, but there is something very hypnotic about the gentle ebb and flow of liquid keeping track of the hours, and there is real artistry in how the charismatic skull with its gold-toothed grin, framed by 668 sapphires, amethysts and tsavorites, has been brought to life. 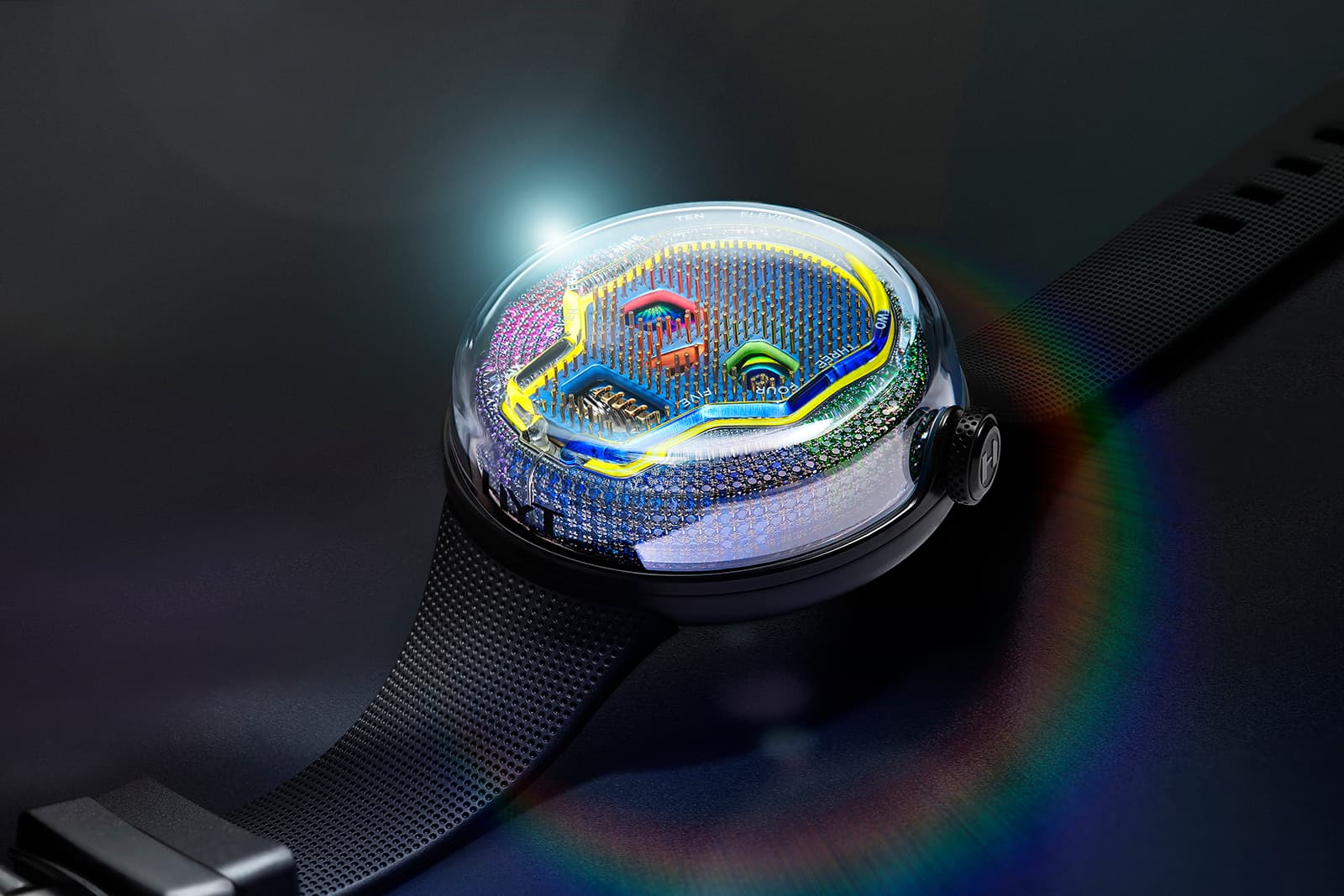 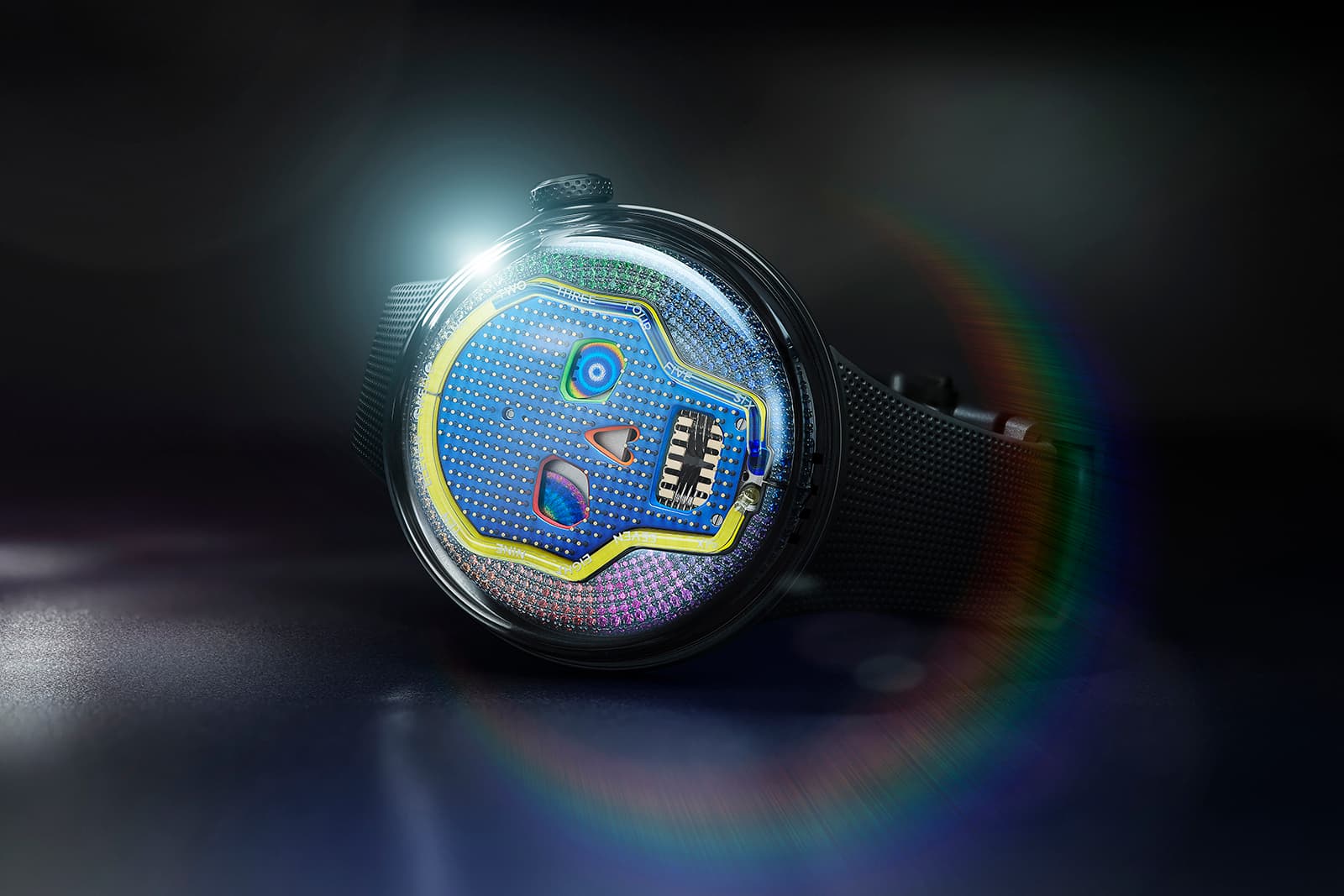 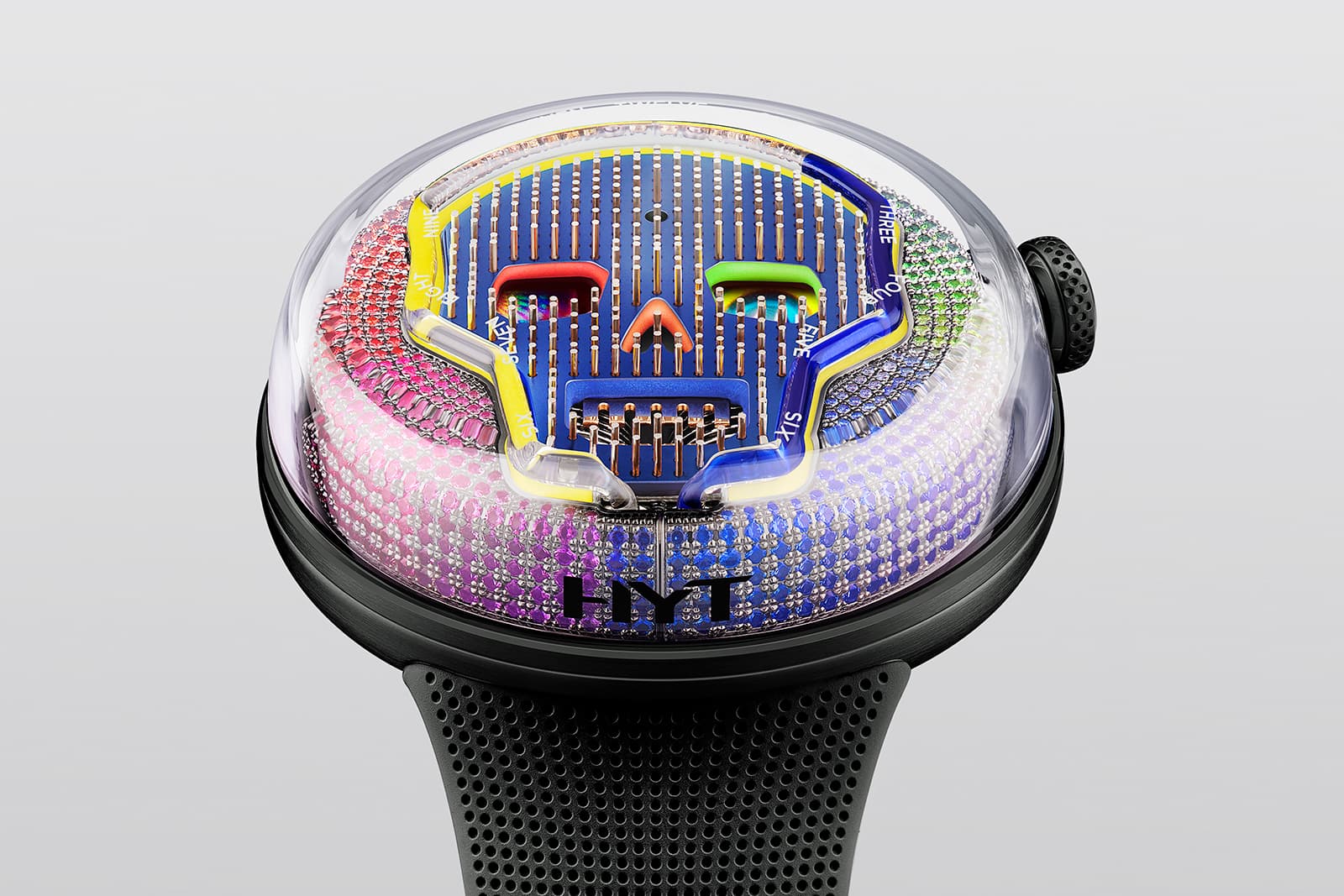 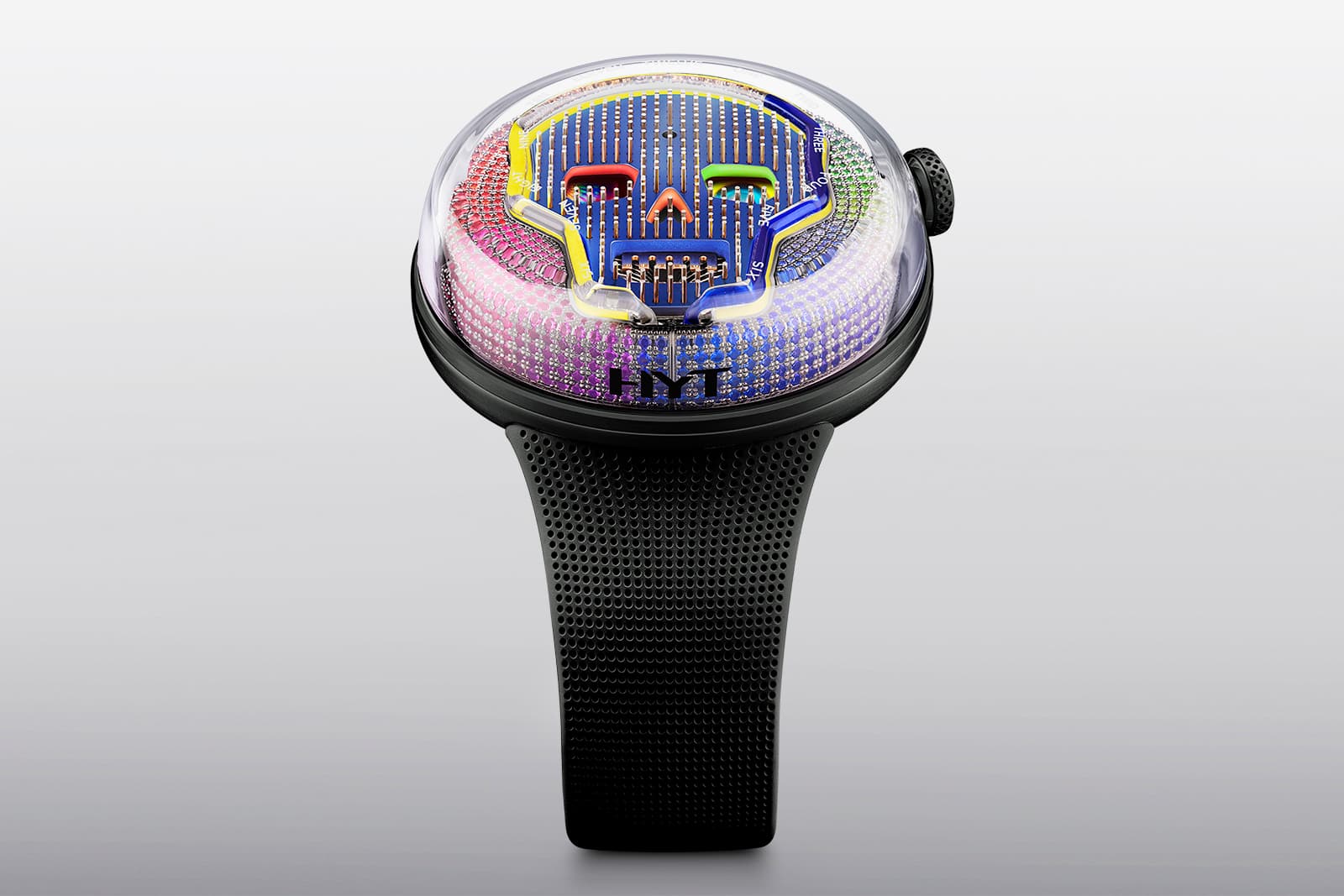 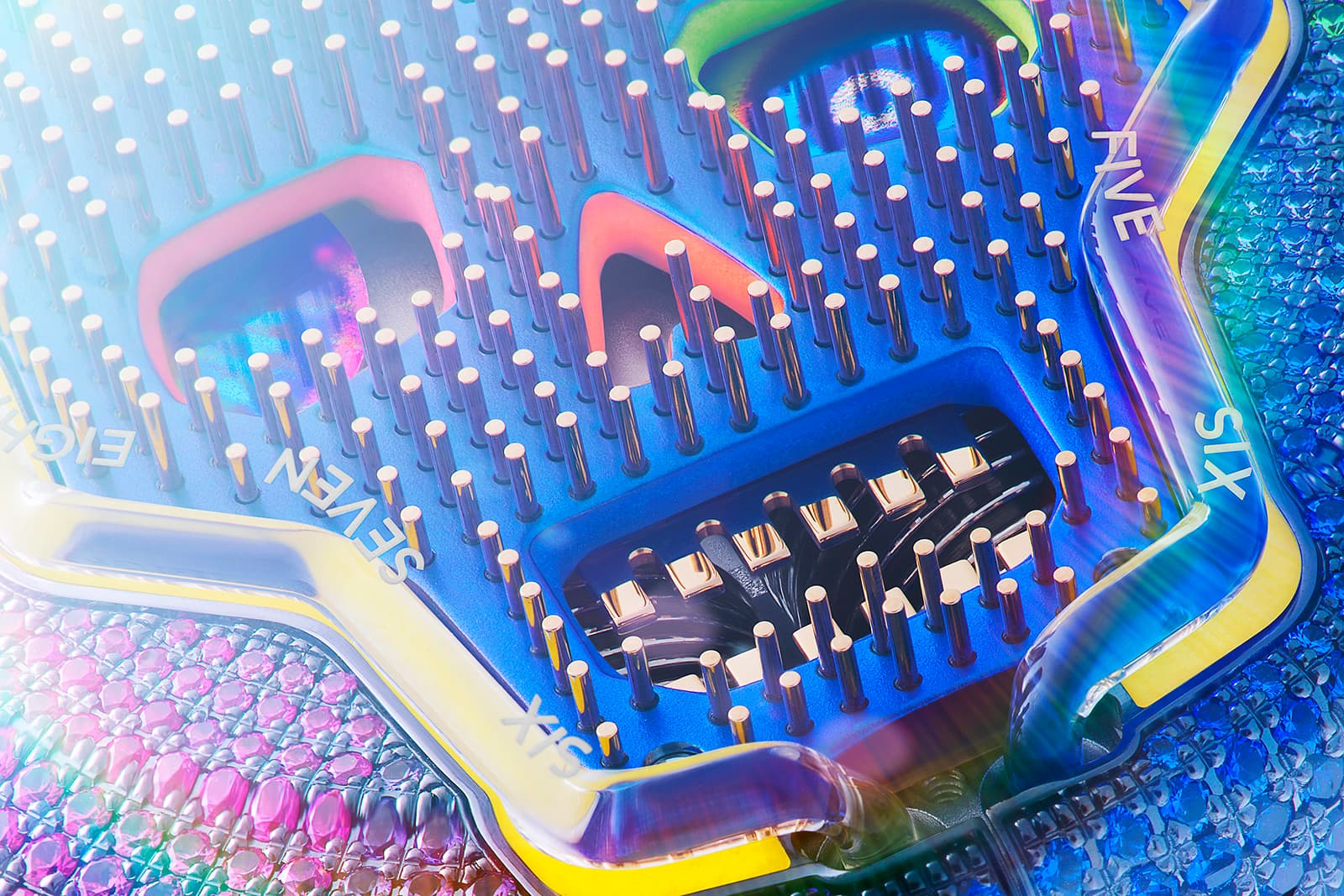 Is it a flying satellite double tourbillon or the first space object? This is the question posed by Jean-Marie Schaller, CEO of Ateliers Louis Moinet, the Swiss watchmaker behind the magnificent Space Revolution timepiece. Described by the brand as “Cosmic Art”, the dial features two spaceships that cross paths 18 times an hour and double tourbillons disguised as space stations that rotate on their axes once a minute. In perpetual movement, it’s a dizzying display of watchmaking prowess, with each timepiece comprised of more than 470 components and six ceramic ball bearings to ensure perfect rotation and balance of all the revolving parts. A limited-edition of just eight, to honour its cosmic origins, each Space Revolution timepiece features a fragment of meteorite positioned just beneath the centre of the hands – the perfect extra-terrestrial finishing touch. 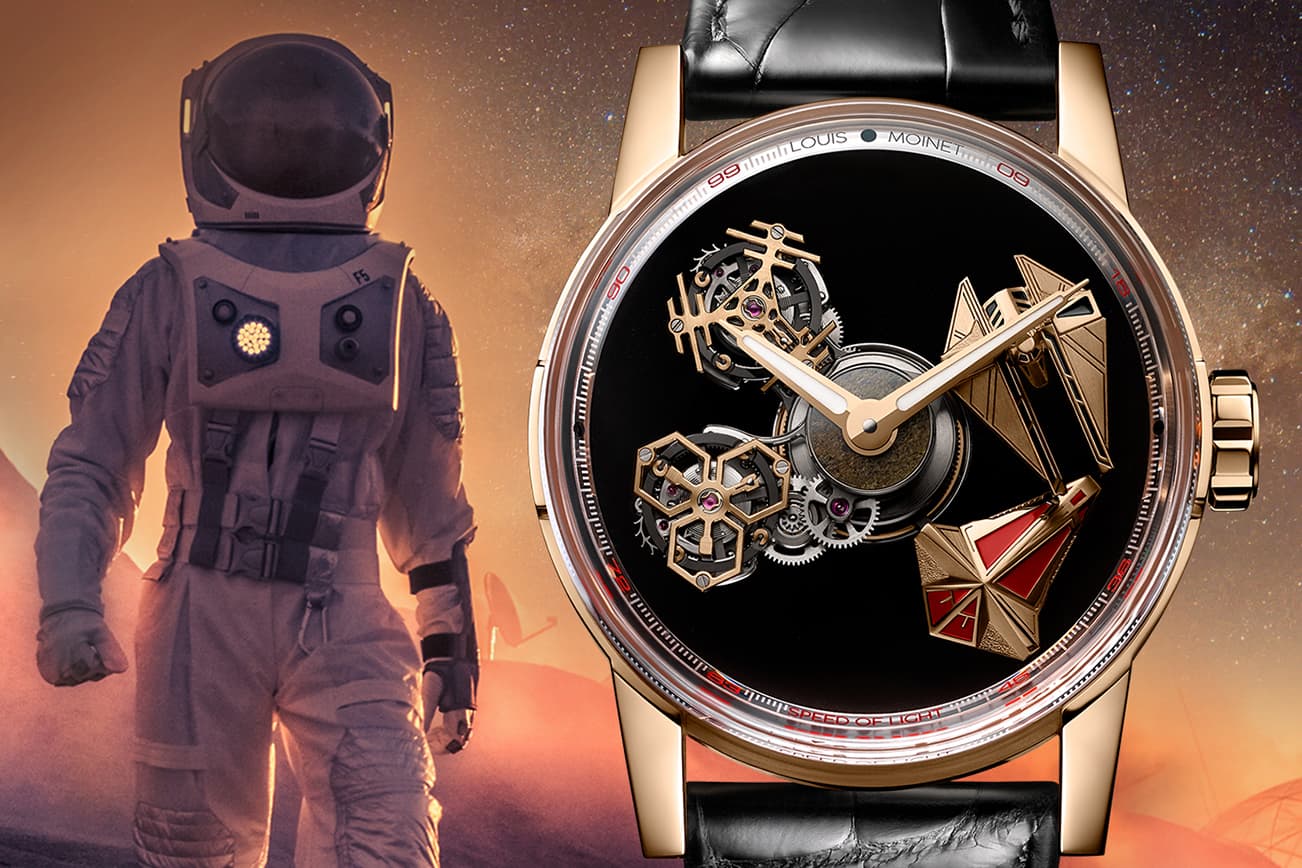 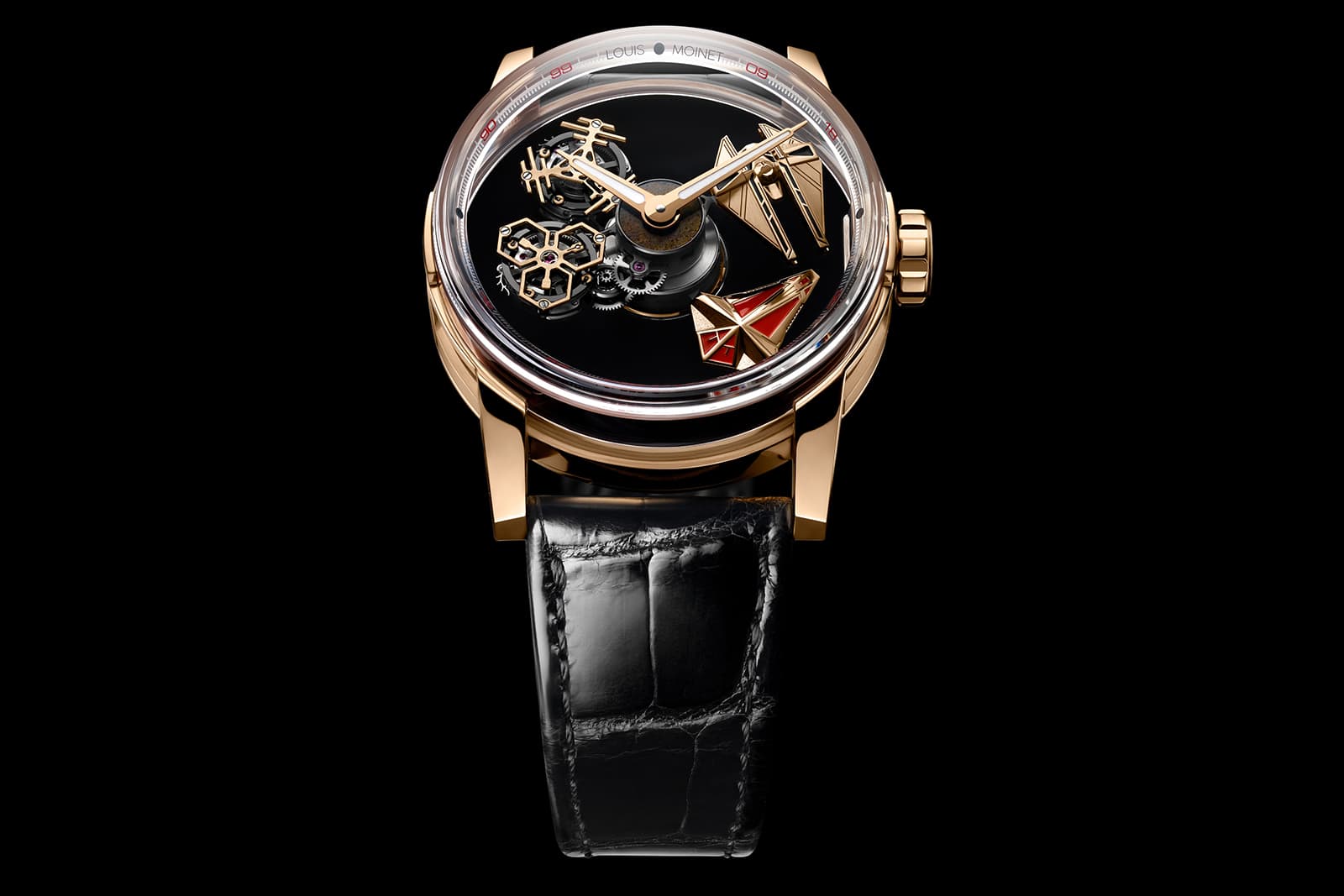 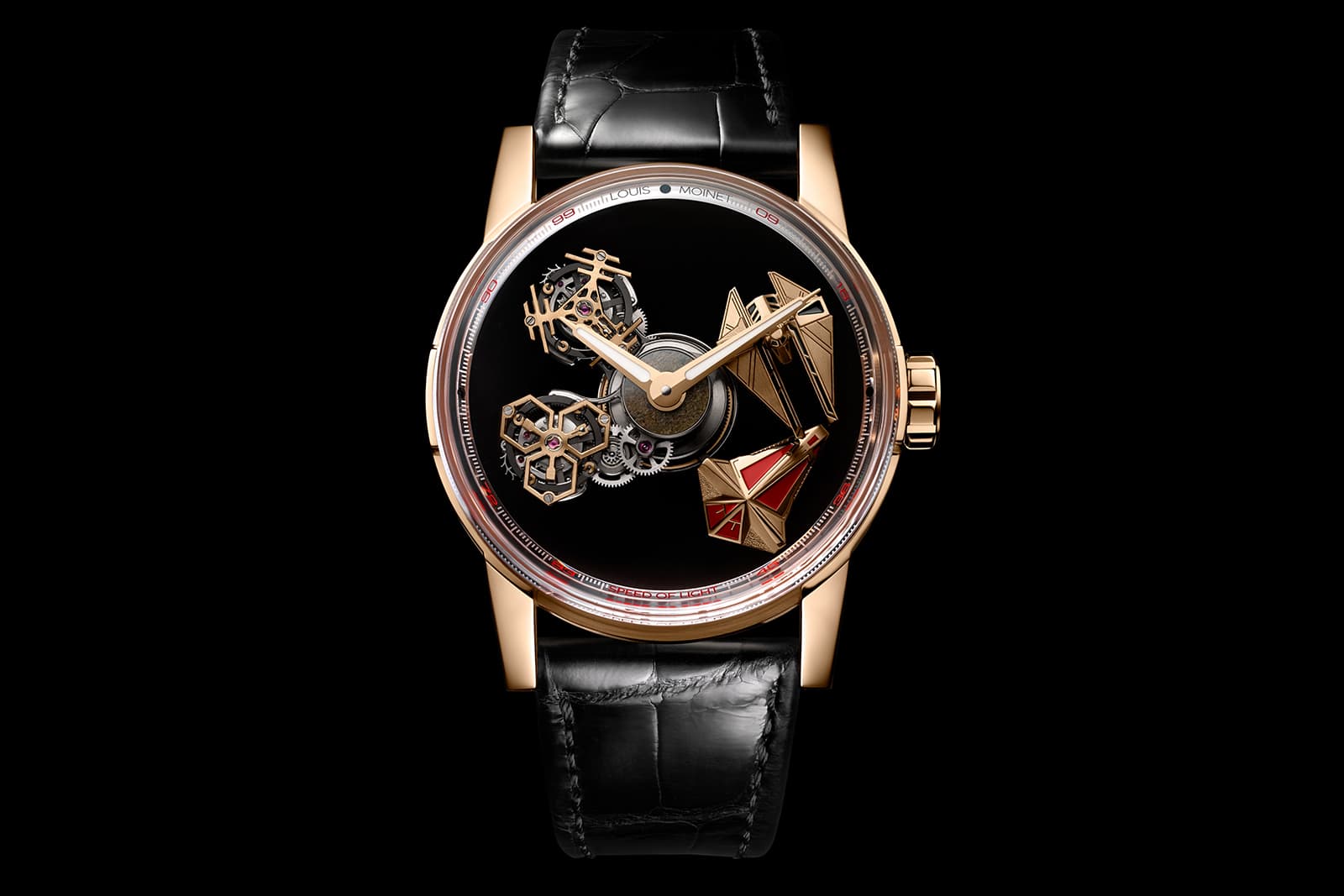 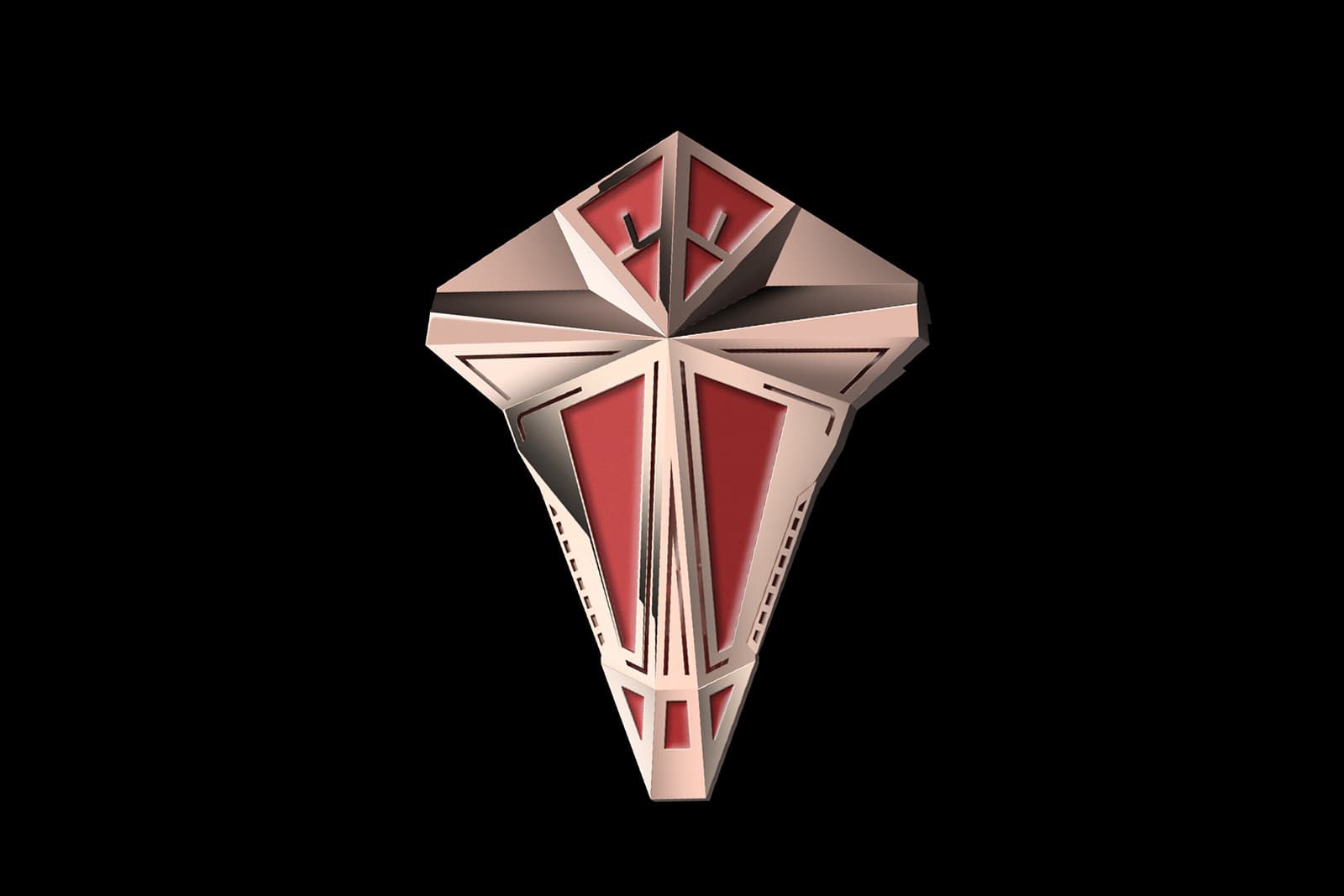 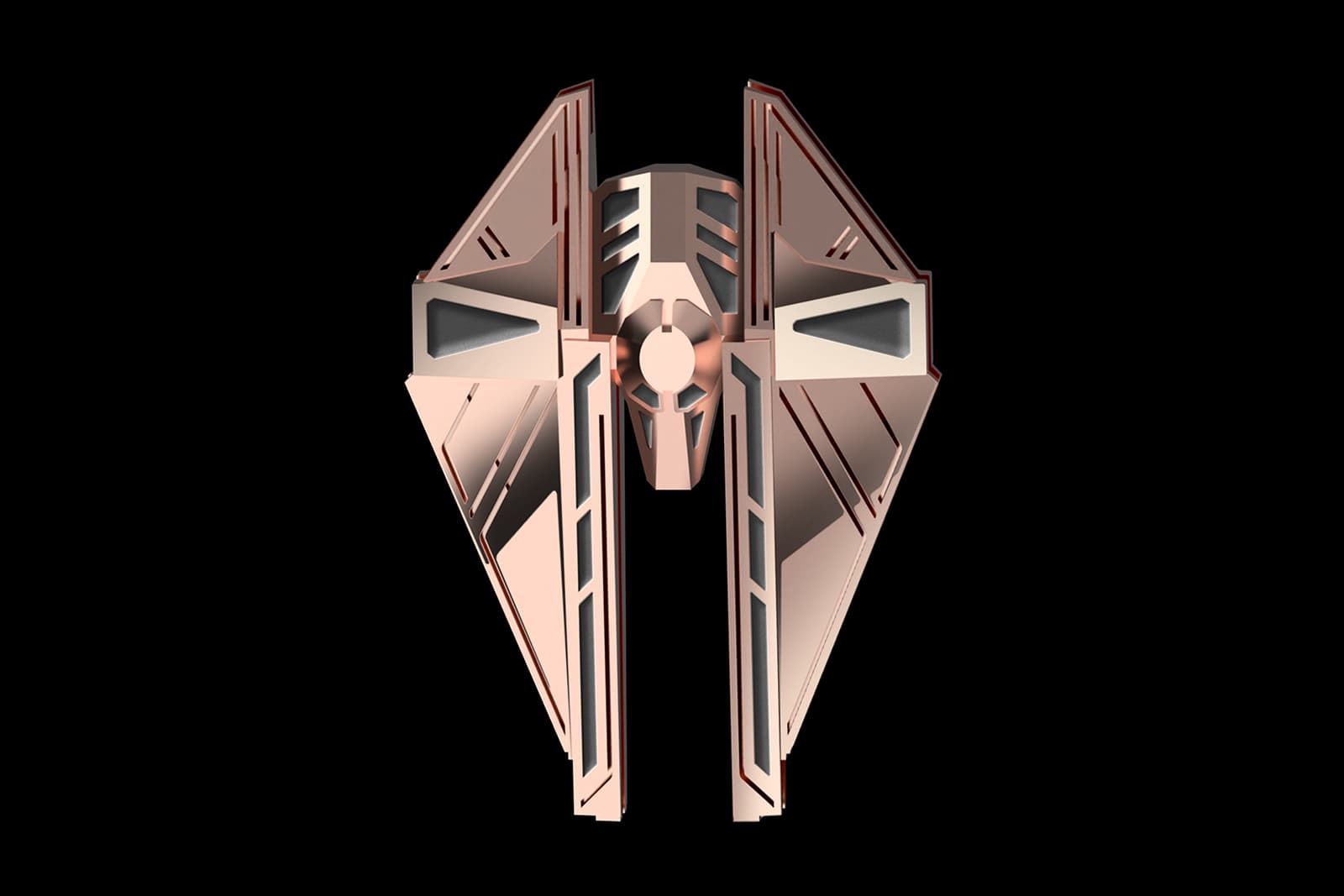 Founded in 2005 by Maximilian Busser, MB&F is renowned for its experiments in watchmaking and chooses to call its creations timekeeping machines rather than timepieces, which gives you an idea of just how idiosyncratic they are. The 10th timekeeper to join the Swiss brand’s bizarre and brilliant Horological Machines collection is the new Bulldog, an avant-garde interpretation of the beefy British pedigree with the wrinkled face and docile disposition. With its bulbous eyes and exposed heart, Horological Machine N°10 Bulldog features two prominent aluminium time-display domes (the “eyes”), a “collar” studded with projections that allow you to wind the mainspring or set the time and a steady heart that beats at 2.5Hz (18,000vph). It is the expressive mouth that truly captures the canine spirit, however, with a 3D power reserve indicator with hinged jaws that open and close to indicate the degree of charge (fully bared silver teeth = a full 45 hours of mainspring energy). Available in two versions, a grade 5 titanium model with blue hour and minute domes and 18-carat red gold and titanium model with black hour and minute domes, MB&F’s Bulldog is definitely whacky but also endearingly cute, much like the lumbering, snuffly British bulldog itself. 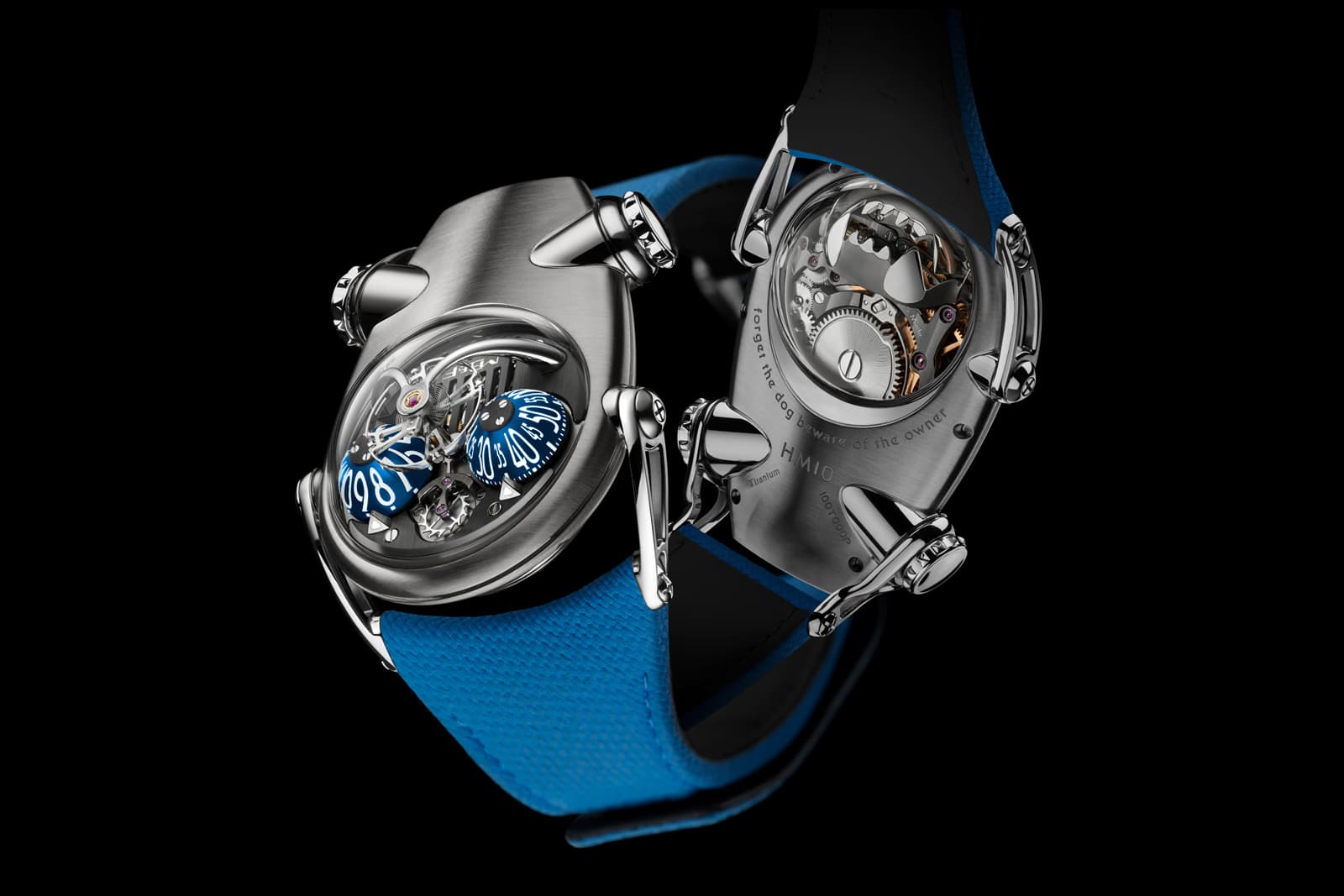 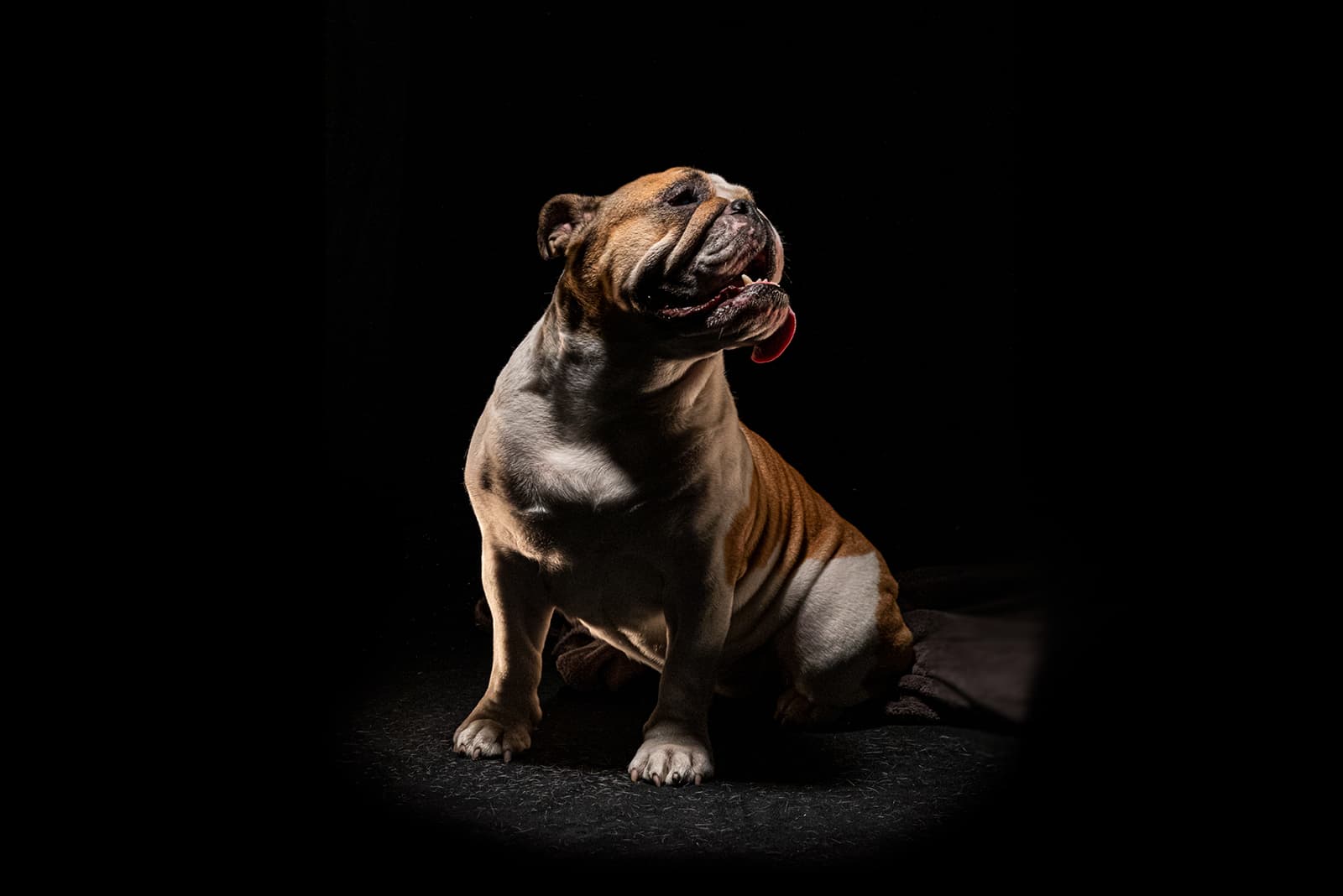 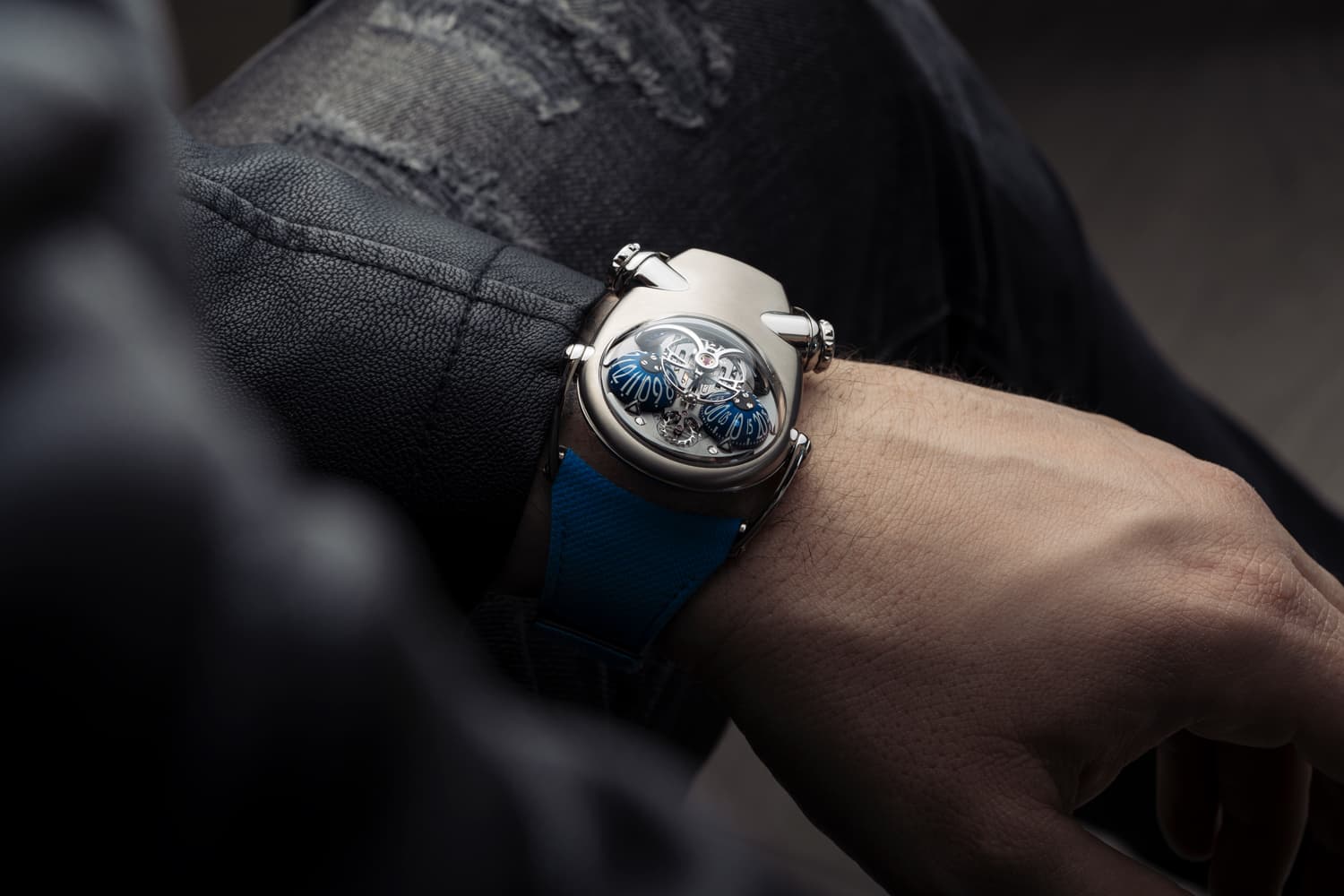 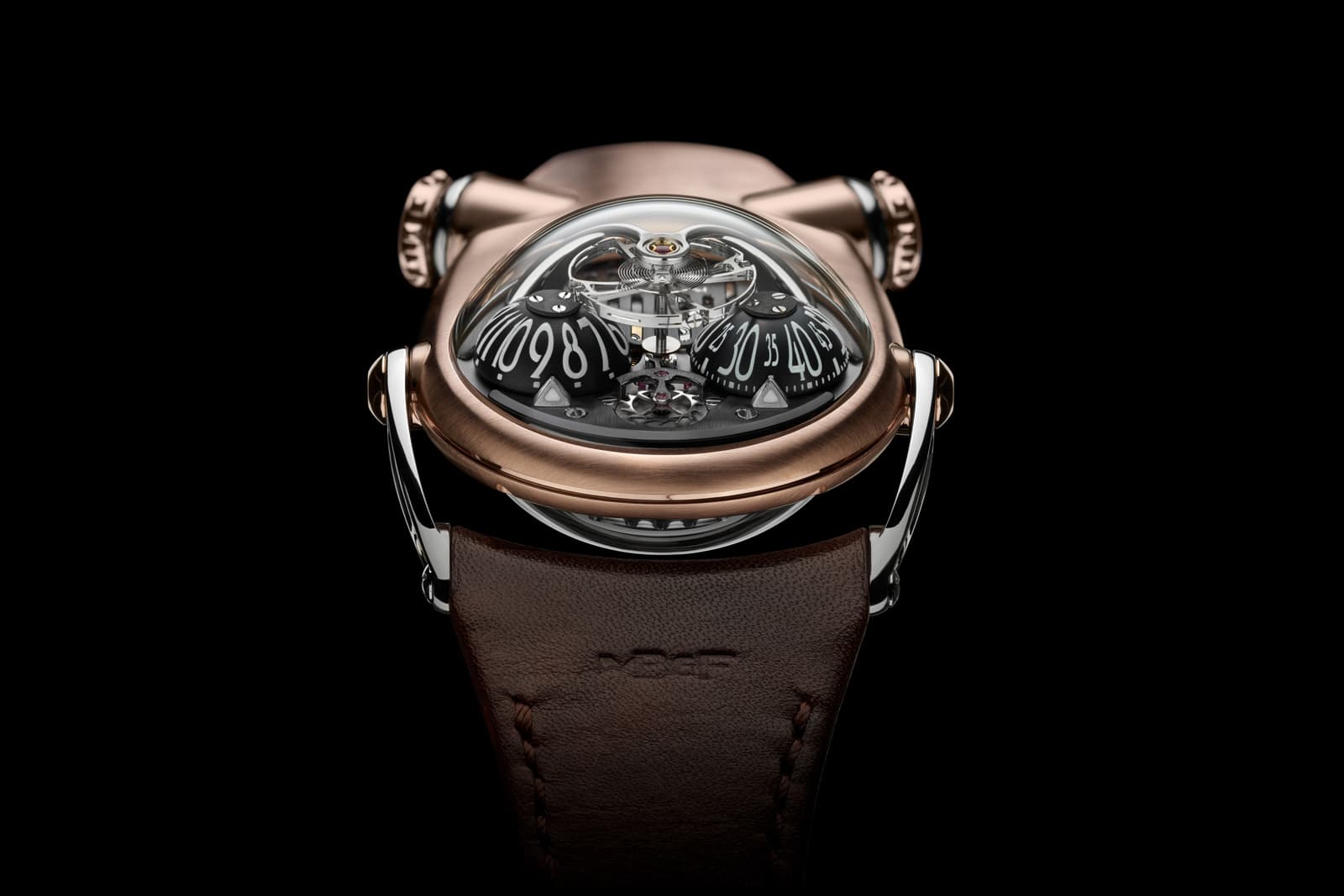 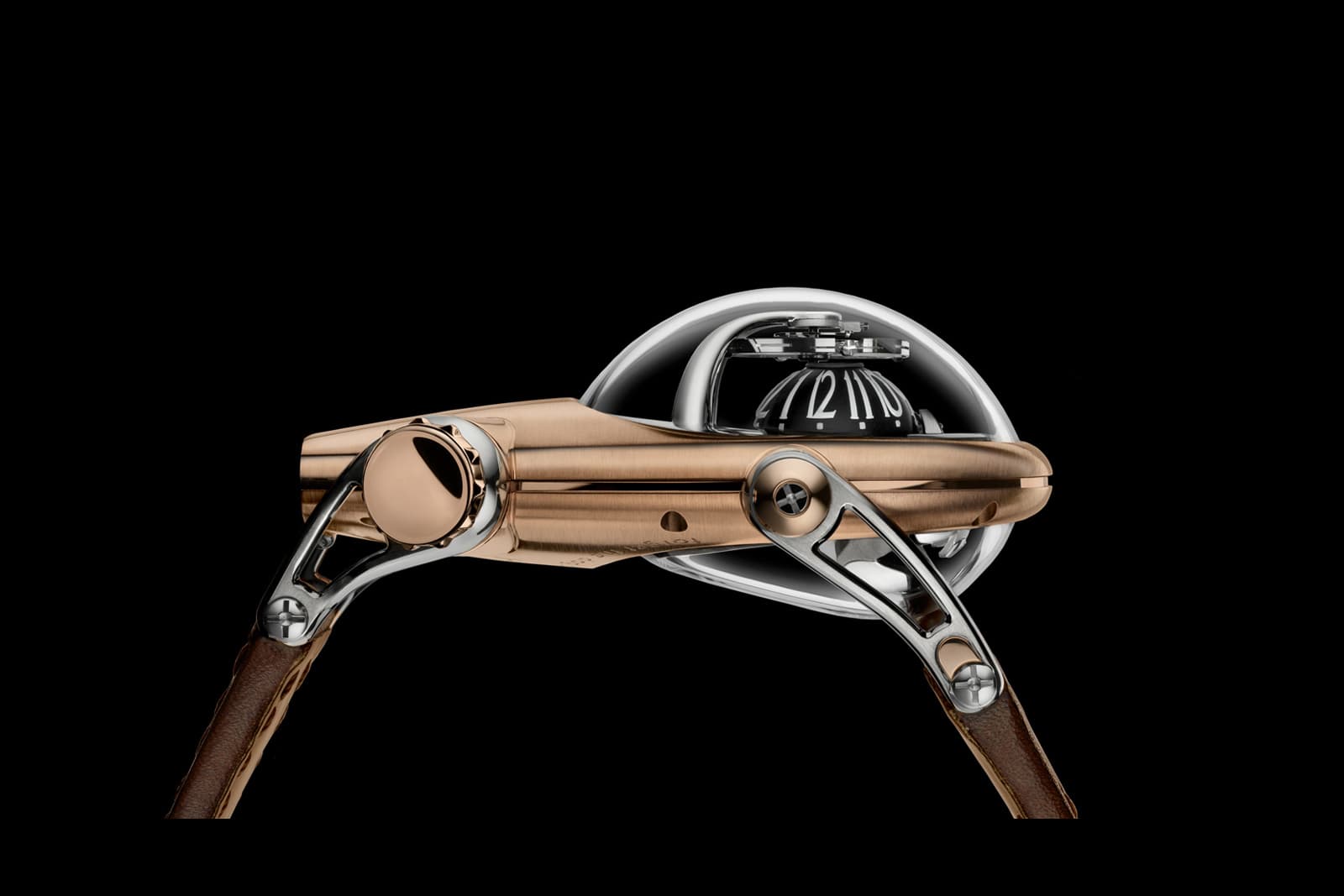 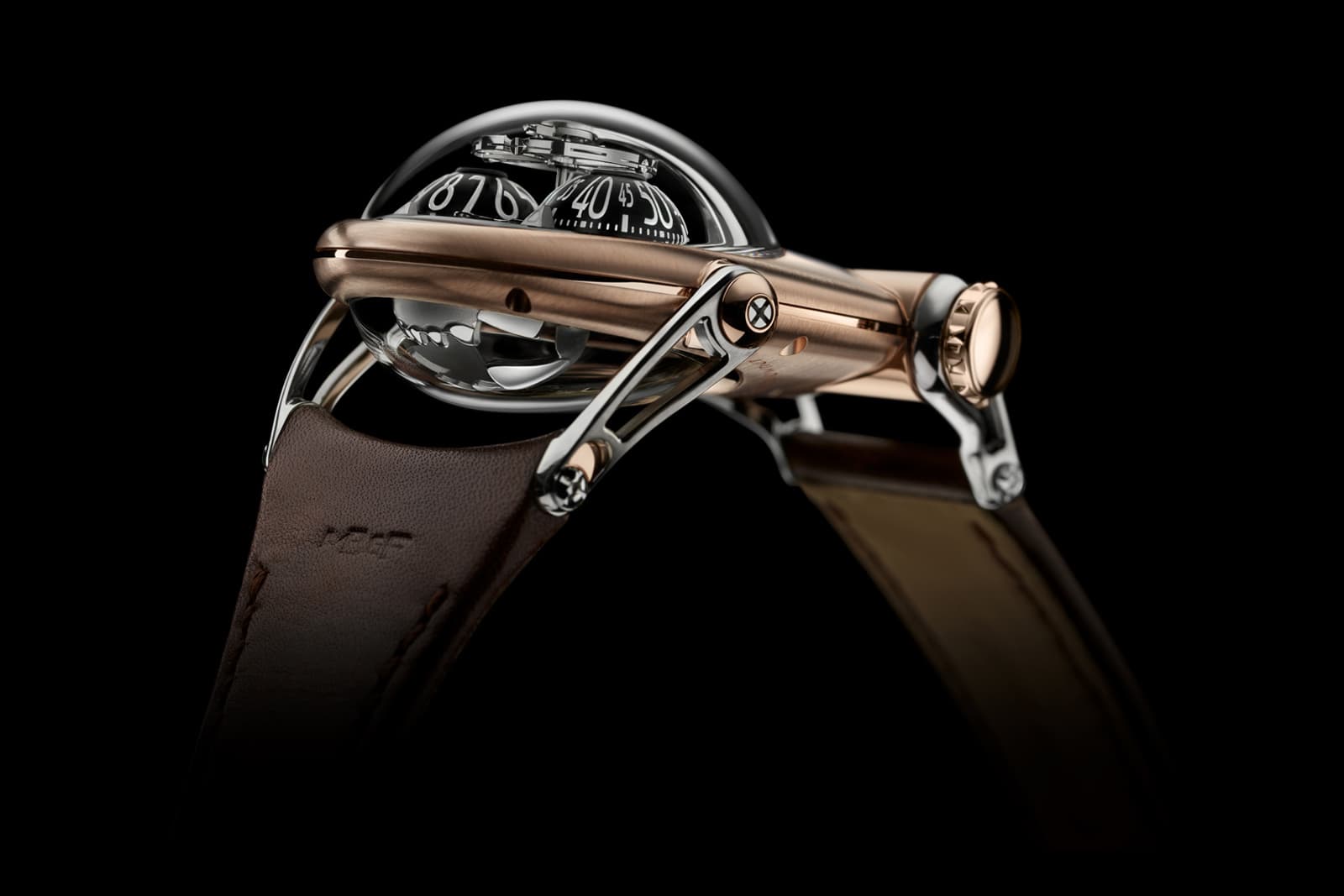 Strange yet beautiful, the whackiest watches of 2020 take complicated watchmaking to the next level, pushing the boundaries of horology, art and design and delighting us with their absolute uniqueness.