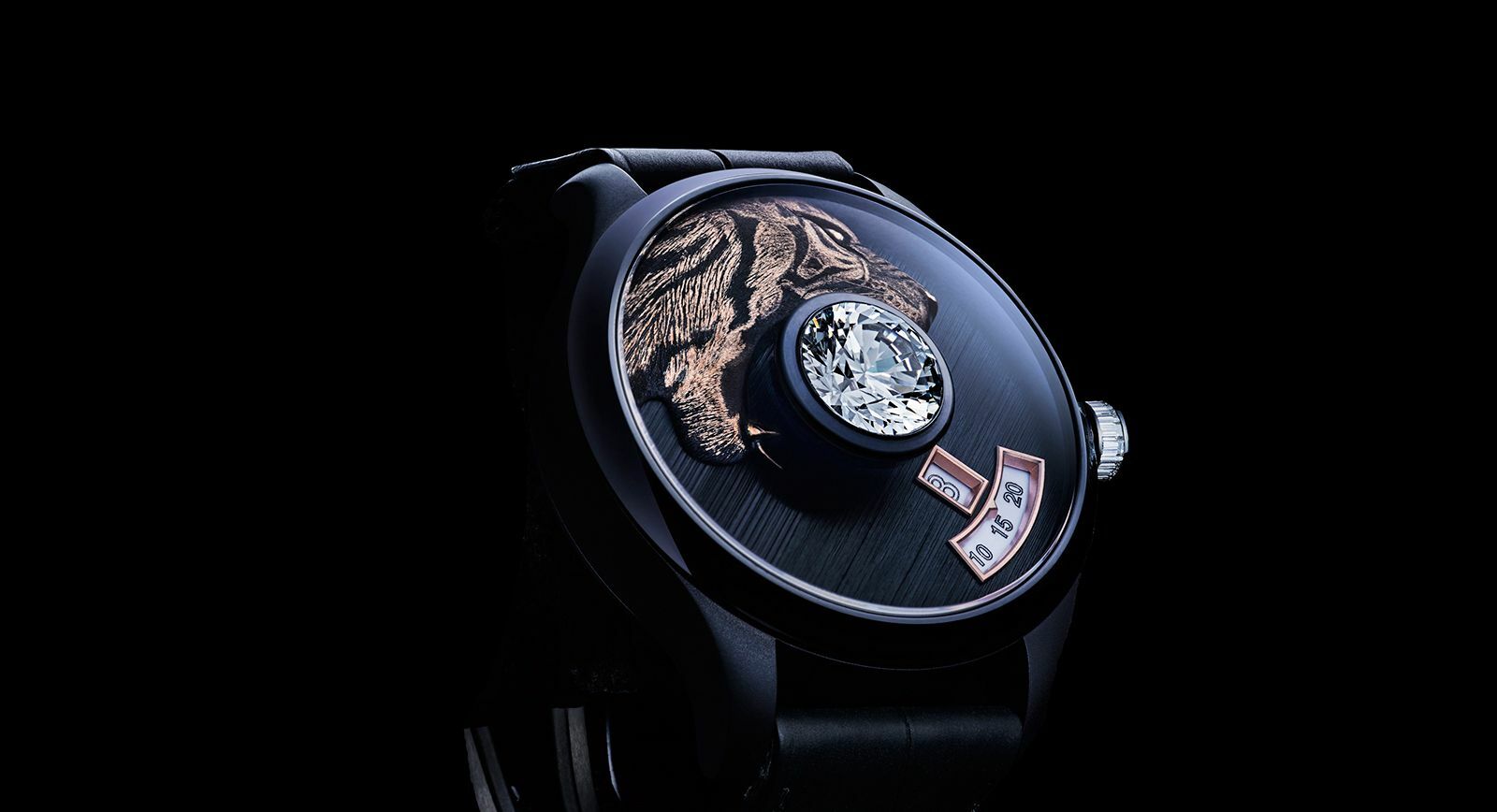 Trends at Baselworld: The Fascinating World Of Fauna

This year, I spent the first day at Baselworld in the company of de Grisogono. The brand released a new playful Crazymals collection, which was the subject of my interview with Fawaz Gruosi that was streamed live on the brand's Facebook page. However, subsequently I realised that this was only the beginning of my acquaintance with the world of fauna at Baselworld. Tigers, lions and buffalos decorated the dials of watches of a range of brands, whilst elephants, bears and bunnies were embodied in jewellery forms, decorated with precious stones.

I have always been attracted by High Jewellery creations that have a note of humour, and in my opinion Crazymals offer precisely this. Each animal is made in the form of a ring and a pendant and is encrusted with a thousand precious stones. The best bit about the items is in their details, some of which are mobile: the eye patch of the Lady Flamingo lifts up, the same goes for Crooner Snake’s and Tux' Penguin’s sunglasses, Hip-Hop Panda has a rotating cap, and the Great Ladybug can turn her head. The cute, charismatic animals were inspired by the Hollywood glamour of the 1950s, and each has a famous alter-ego, for example, the flamingo's is Za-Za, the koala's, Don Francis and the snake's is Frank Sinatra. 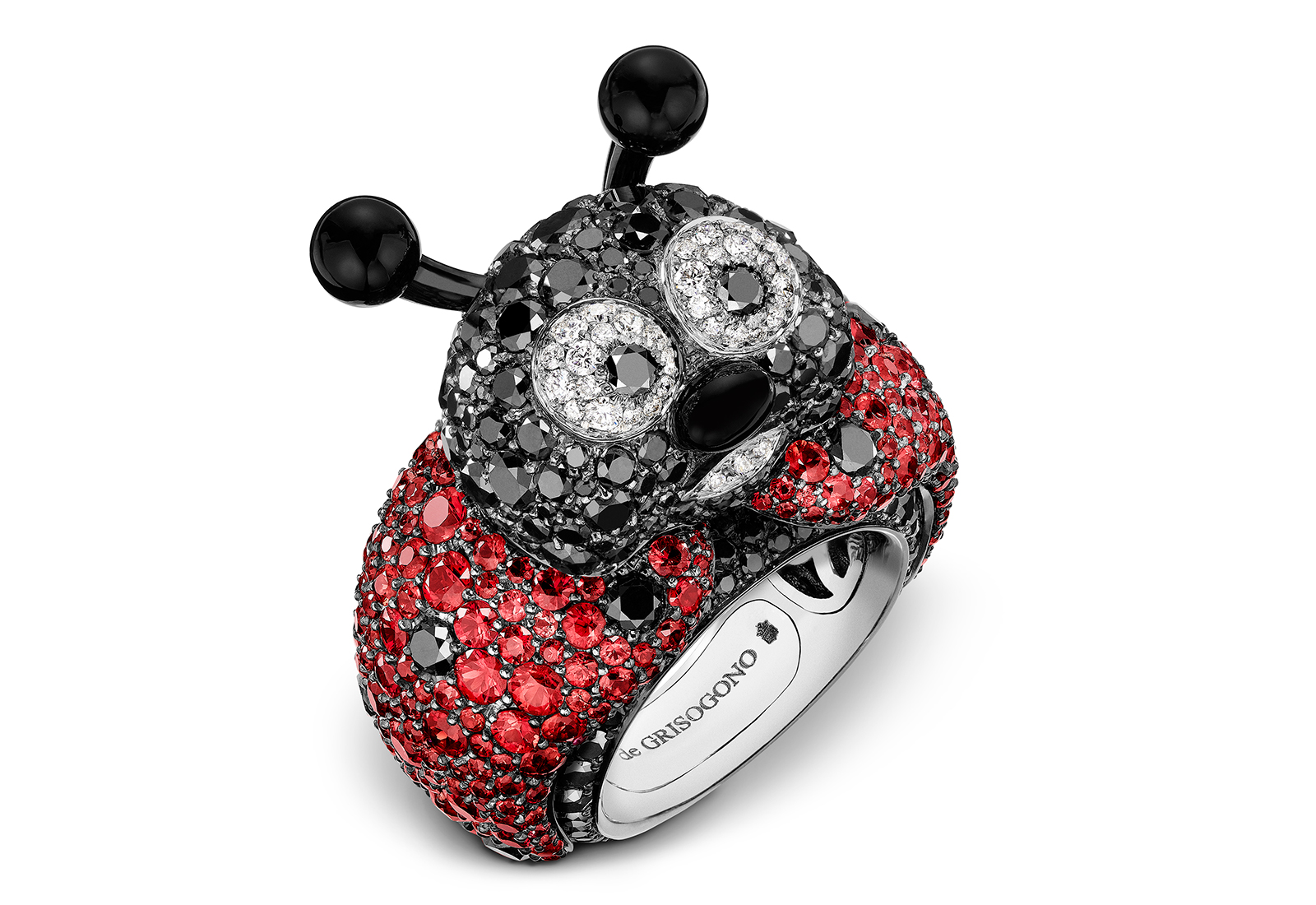 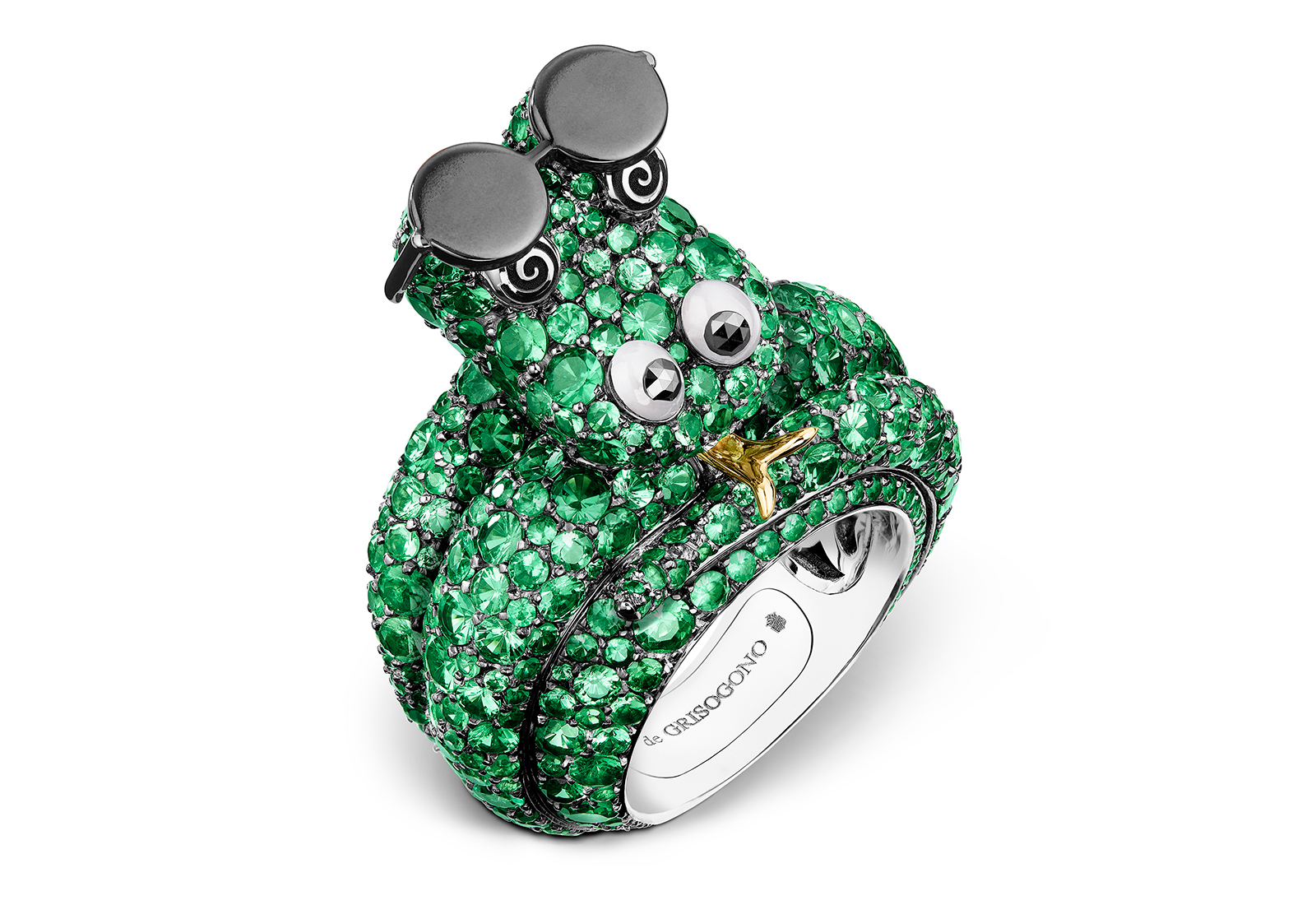 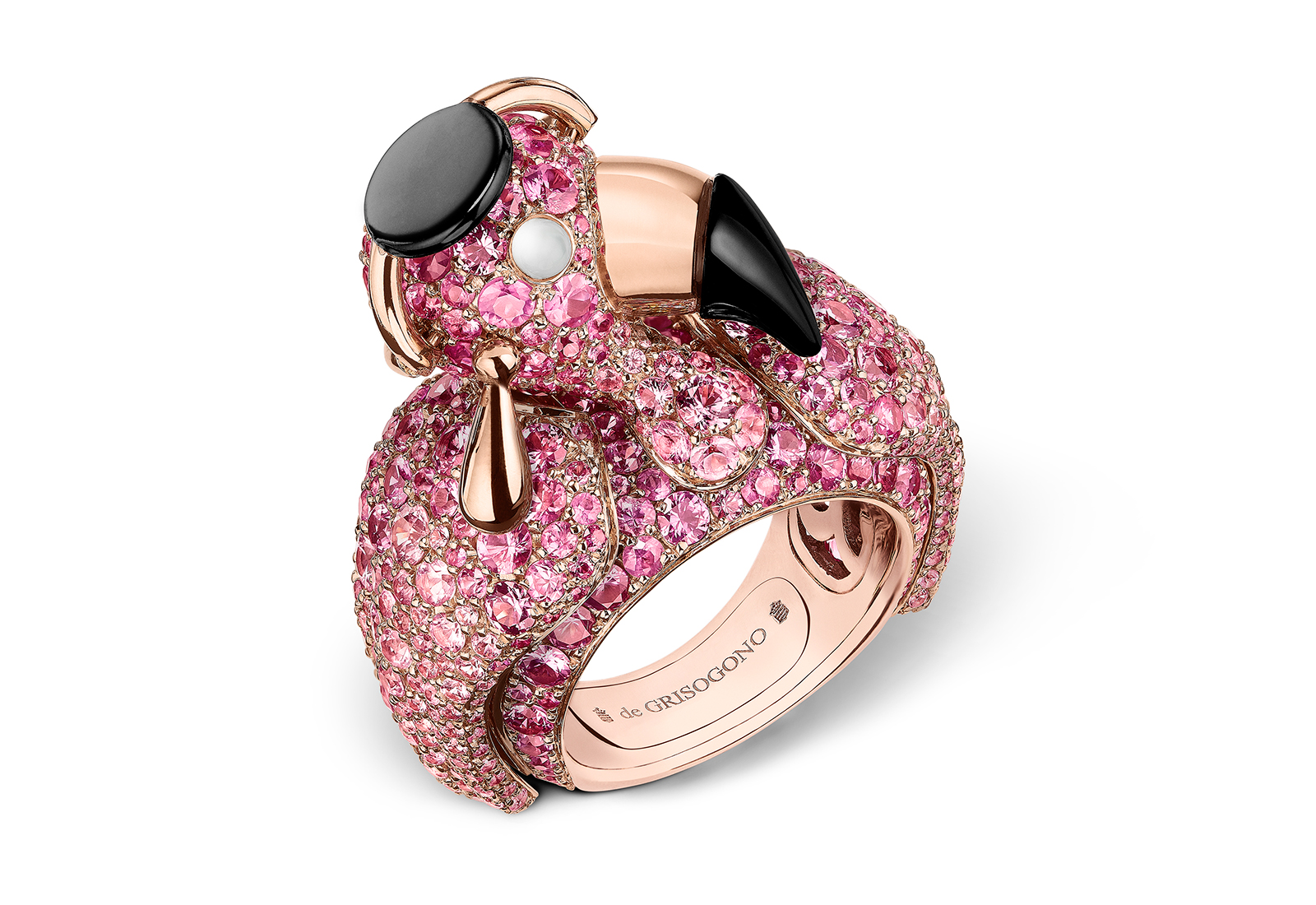 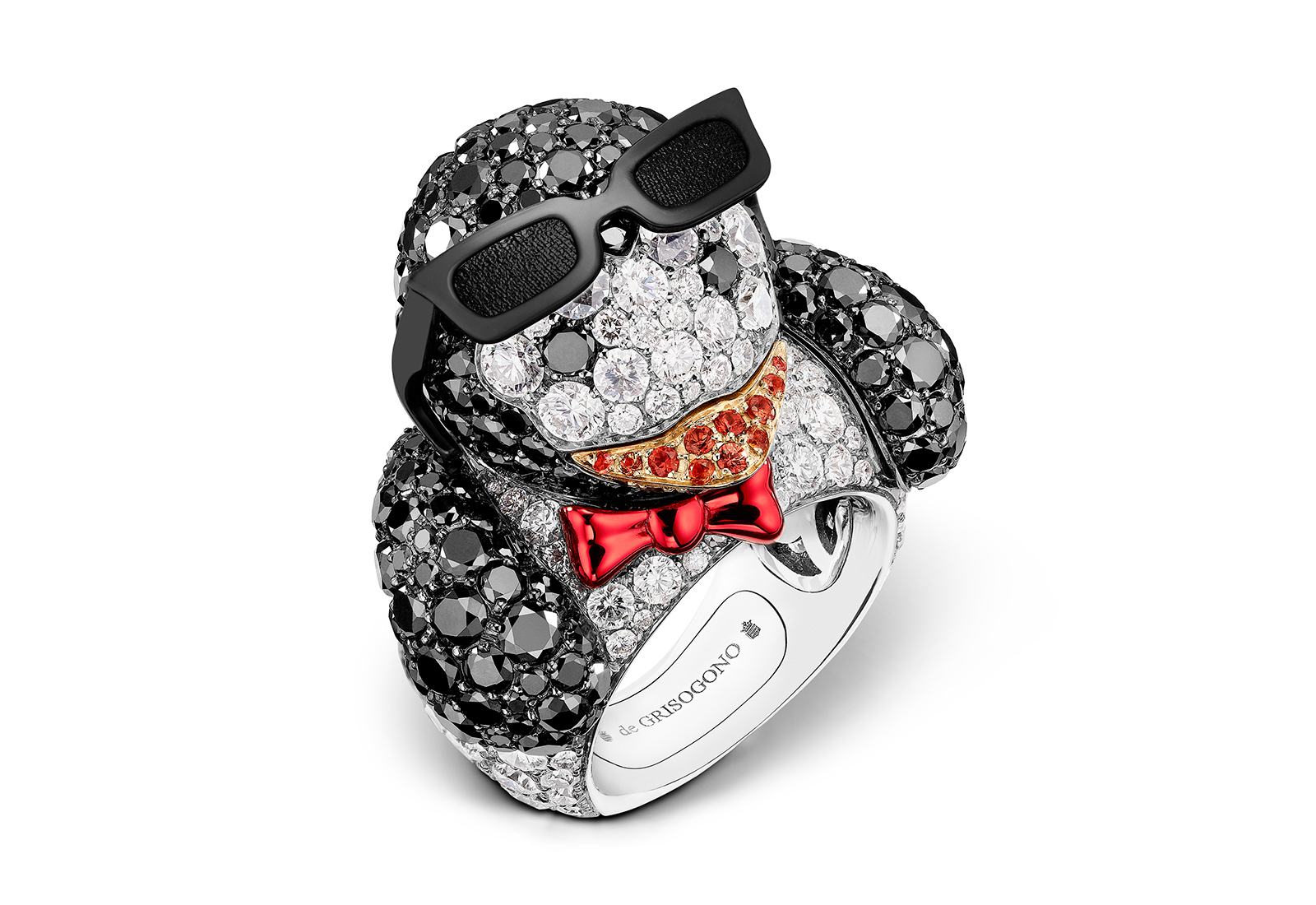 For several years already the Italian jeweller has been adding new models to its Animalier collection of animal-themed jewellery. In its zoo you'll find a rabbit, a piglet, a monkey, a hedgehog and also many other animals and birds. All of them are made in the form of rings or bracelets with multi-coloured sapphires, garnets, tsavorites, onyx and a range of gemstones. This year, the "glamorous farm" has a new inhabitant – a rooster with multi-coloured sapphires and diamonds. 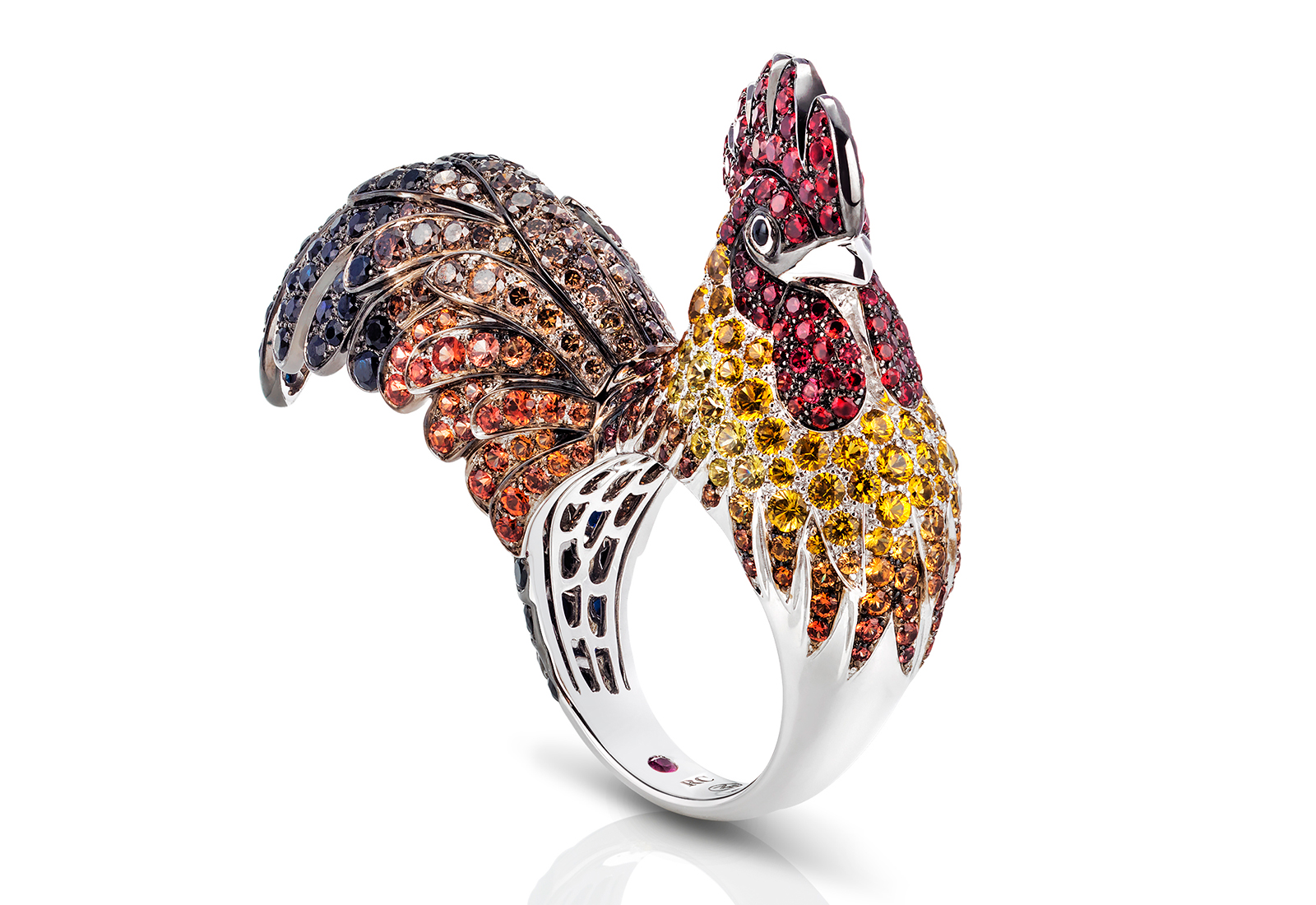 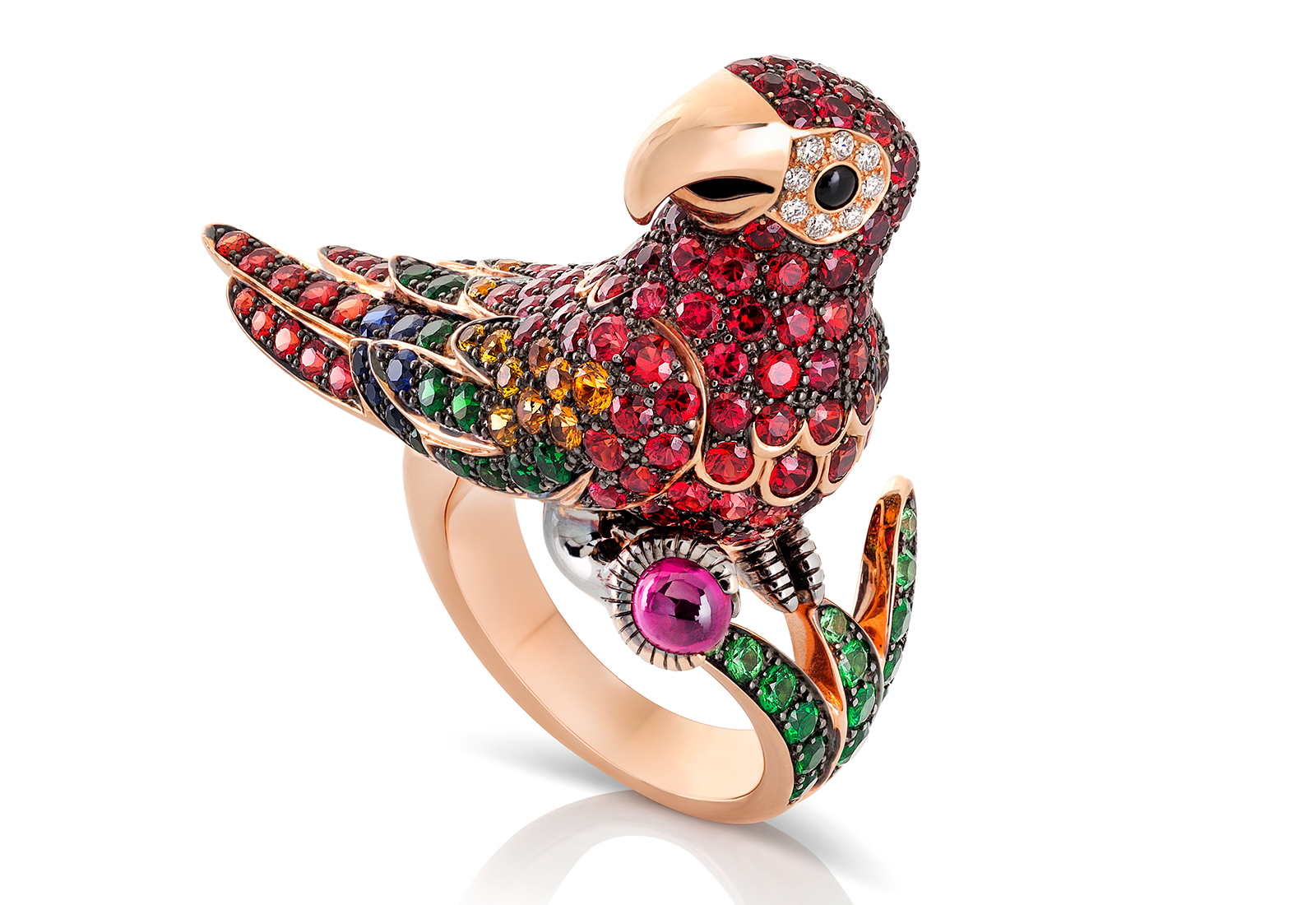 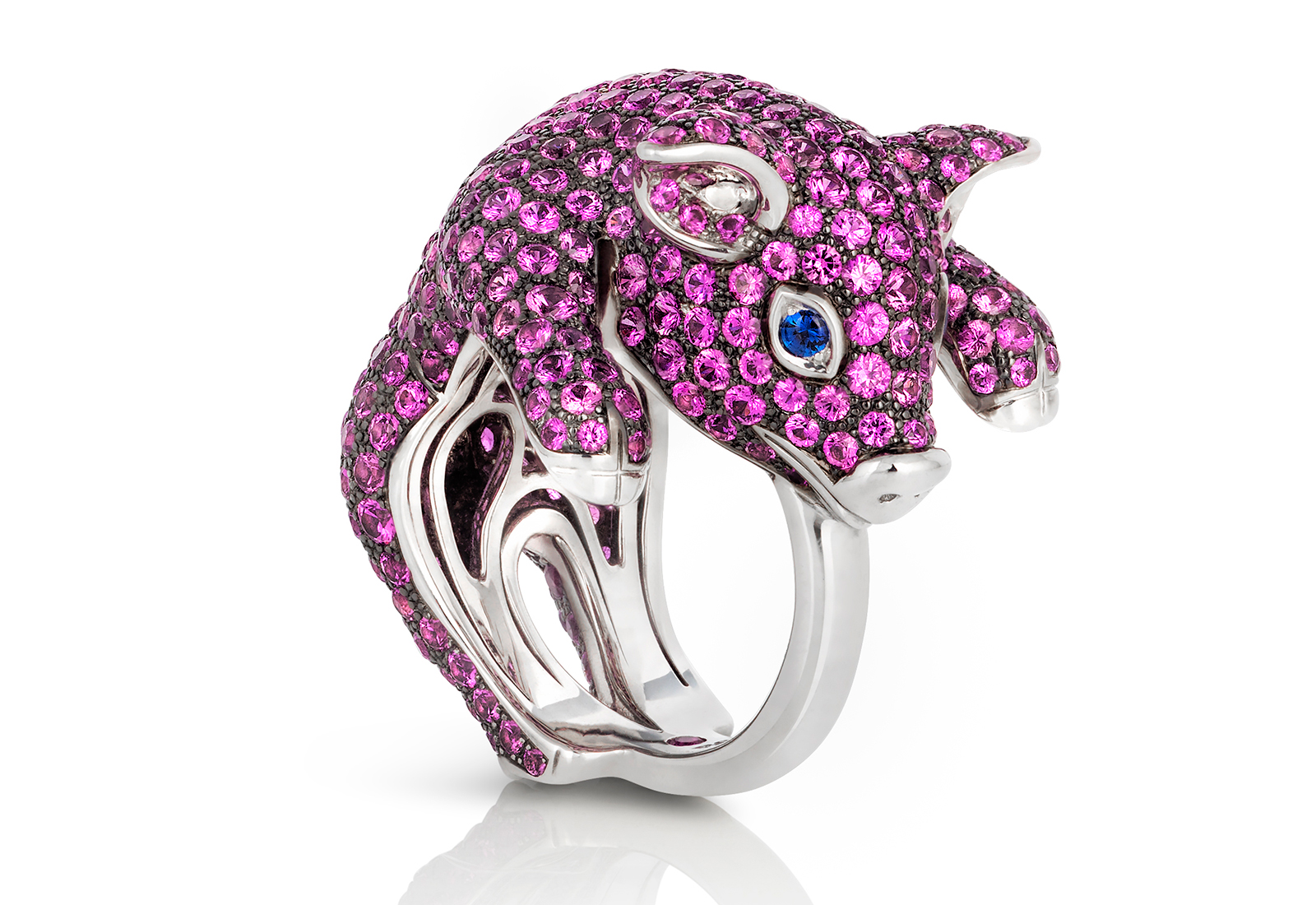 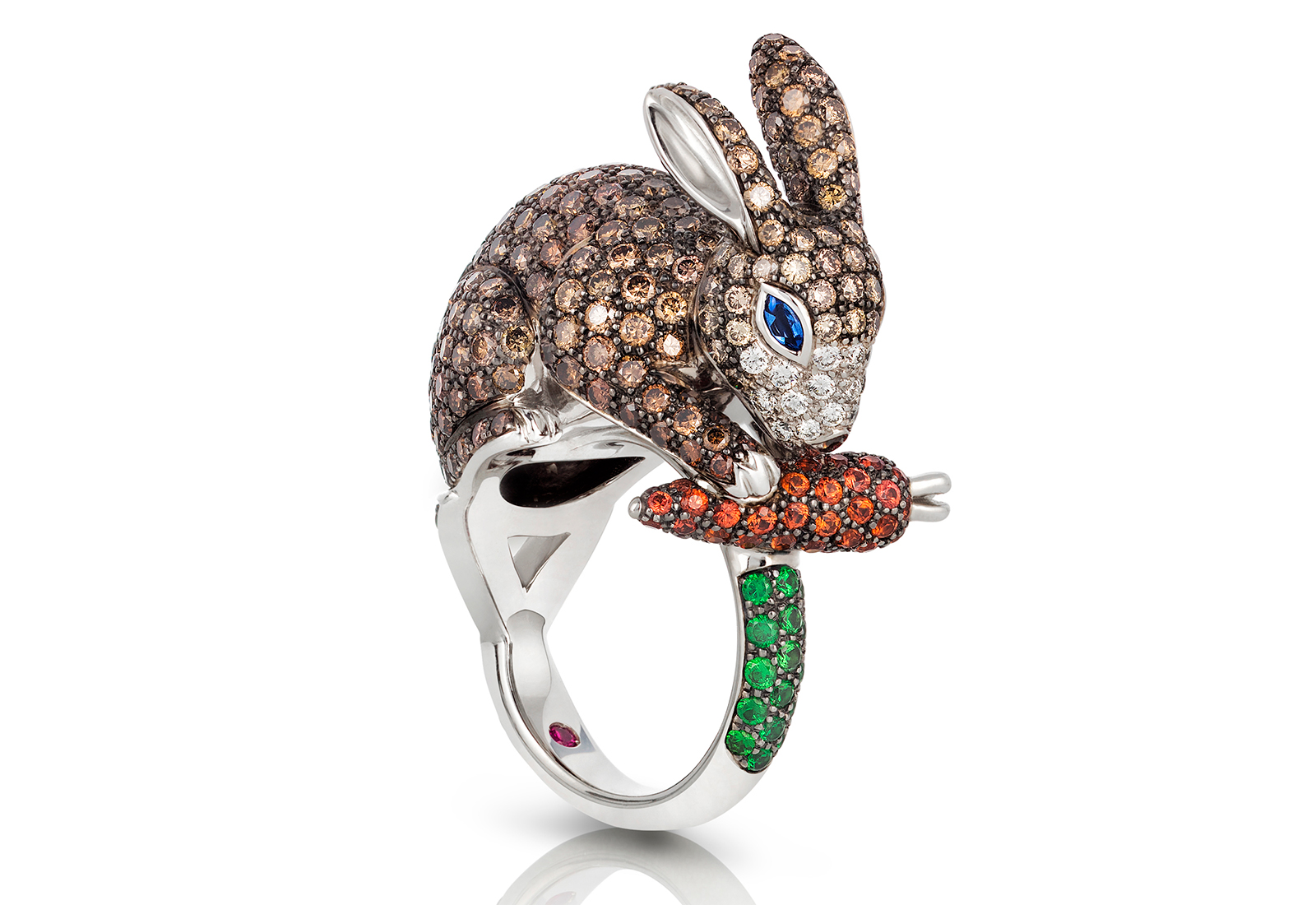 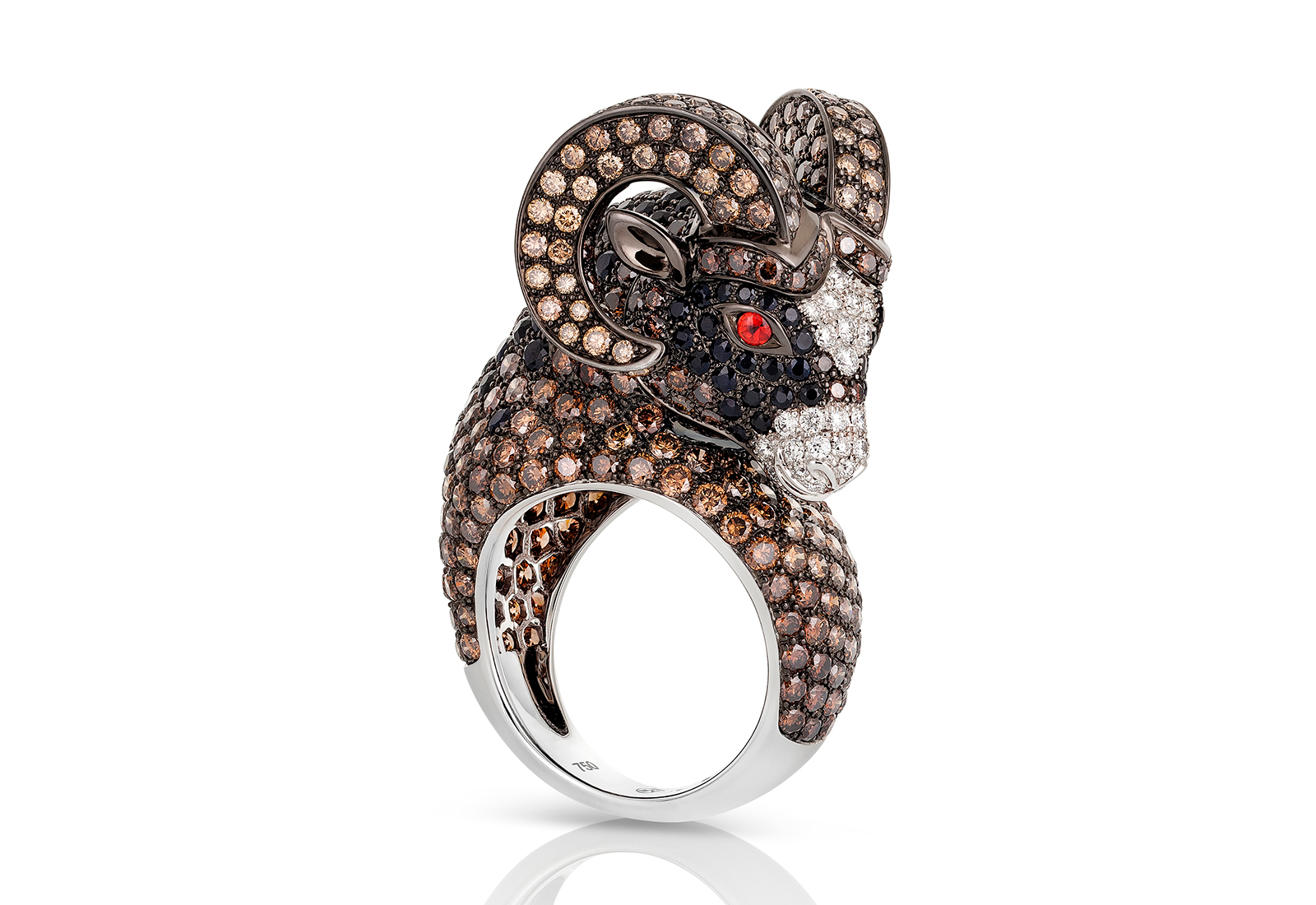 Hard Candy is an iconic collection by the Lebanese designer Christina Debs. It is filled with stones including bright chrysoprase, turquoise, agate and lazurite. Items can be personalised with miniature initials that are inserted into a special hole, drilled into the flat stone, and secured from within with a screw. This year, Christina debuted a series of tiny animals that can be inserted into the earrings, pendants or rings instead of the initials. These include an elephant, a crocodile, a duck and a spider, all encrusted with tiny diamonds. 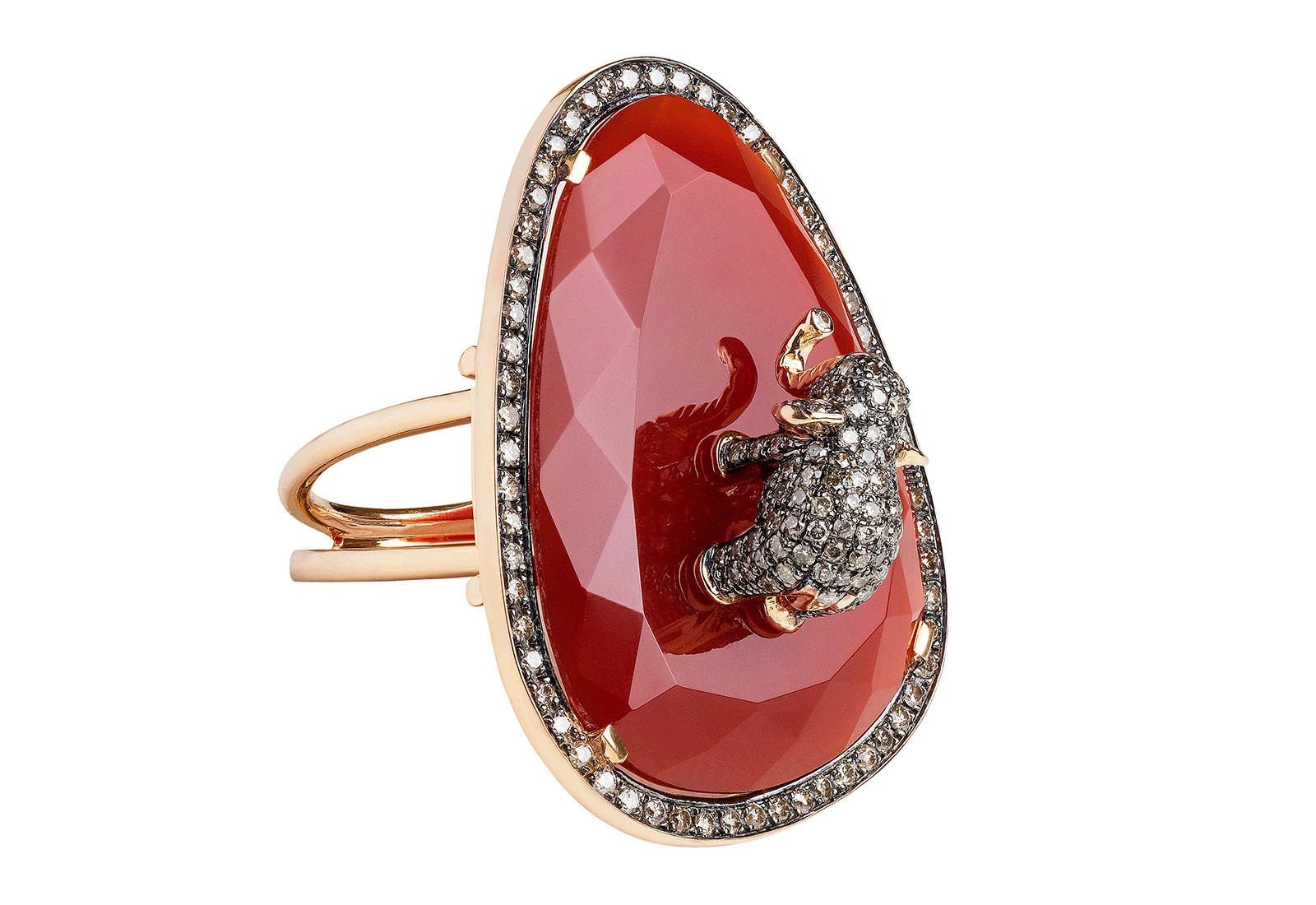 The Italian jewellery company Busatti is famous for producing High Jewellery pieces using rare precious stones. However, you won't only find evening sets, cocktail rings and cuff-bracelets in its collections. One of Busatti's latest lines is devoted to the animal kingdom and consists of rings, which are decorated with a miniature turtle, a frog, rabbits, a mouse and several other creatures. Their gold bodies are adorned with dozens of precious stones, set using the pavé technique.  The Busatti family has given as much attention to these seemingly uncomplicated jewellery pieces, as to their premium range pieces, meaning that even the rings with animals demonstrate the heights of craftsmanship of the Italian brand. 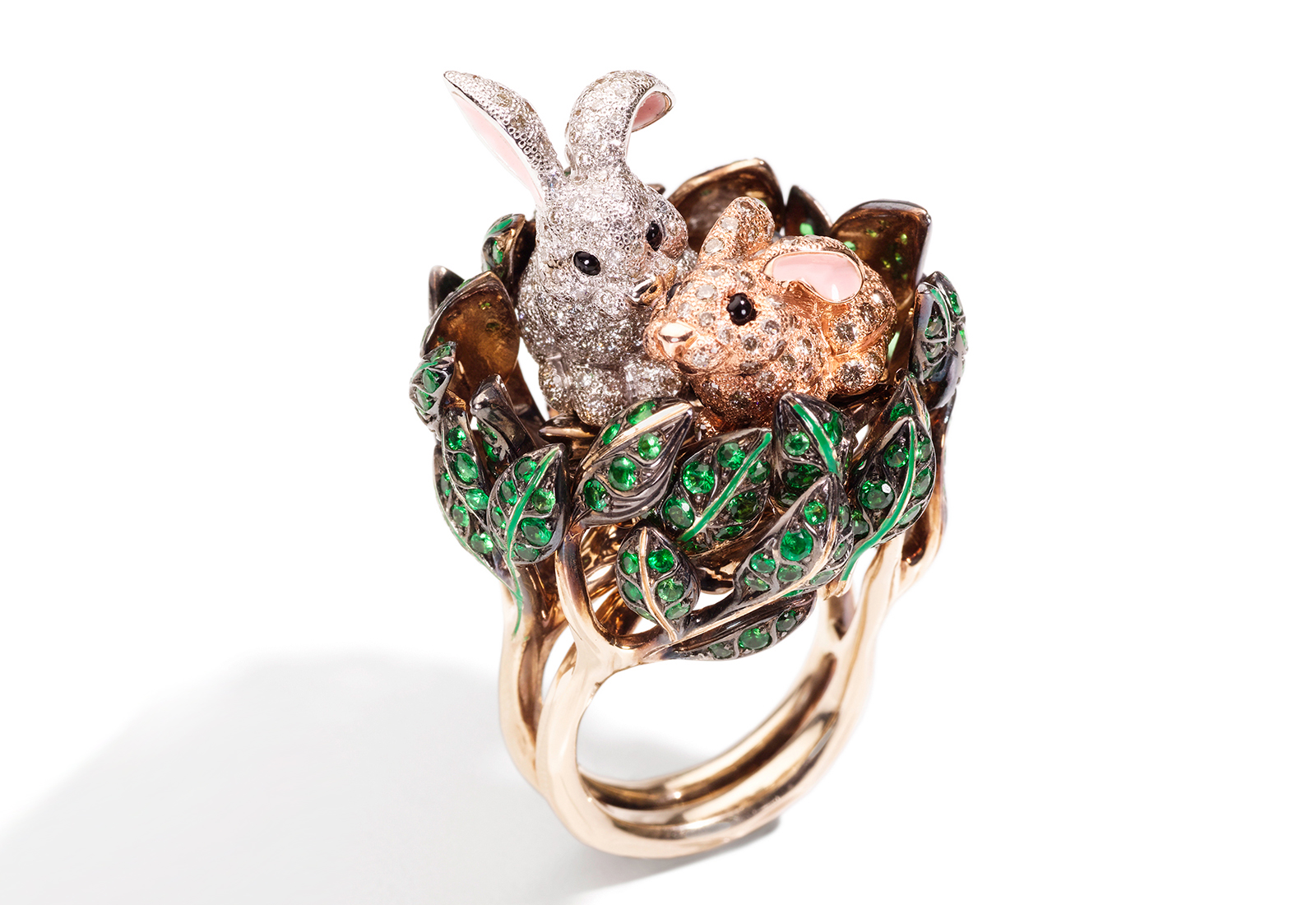 The craftsmen at Blaincpain, working in the company's workshop Métiers d'Art have created a new watch model made from gold and shakudō (a special allow of gold and copper). Its dial depicts a "battle of the queen cows". This variety of animal from Val d’Hérens has been part of the national heritage of Switzerland since 1861. The Matterhorn mountain, which serves as a background for the battle,  is an equally important symbol of Switzlerland. 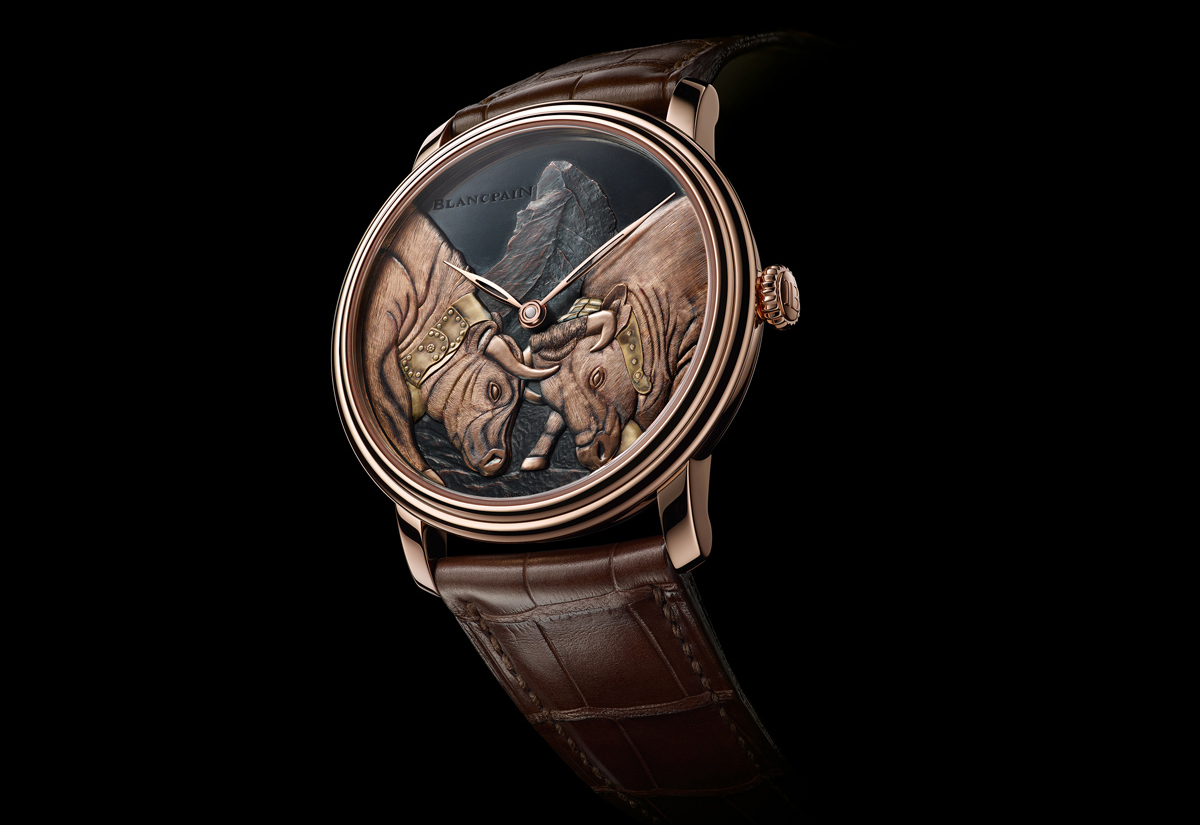 Jaquet Droz released three unusual versions of the watch Petite Heure Minute with miniature depictions of a lion, flamingo and Koi Carp. They were applied by the craftsmen as thin strokes of enamel onto a black dial. The hot enamel must be exactly the same black colour, as such a background makes the ornament look sizeable, and the thin strokes applied by the artist's brush – elegant. The enamellers of Les Ateliers d’Art worked precisely on these. 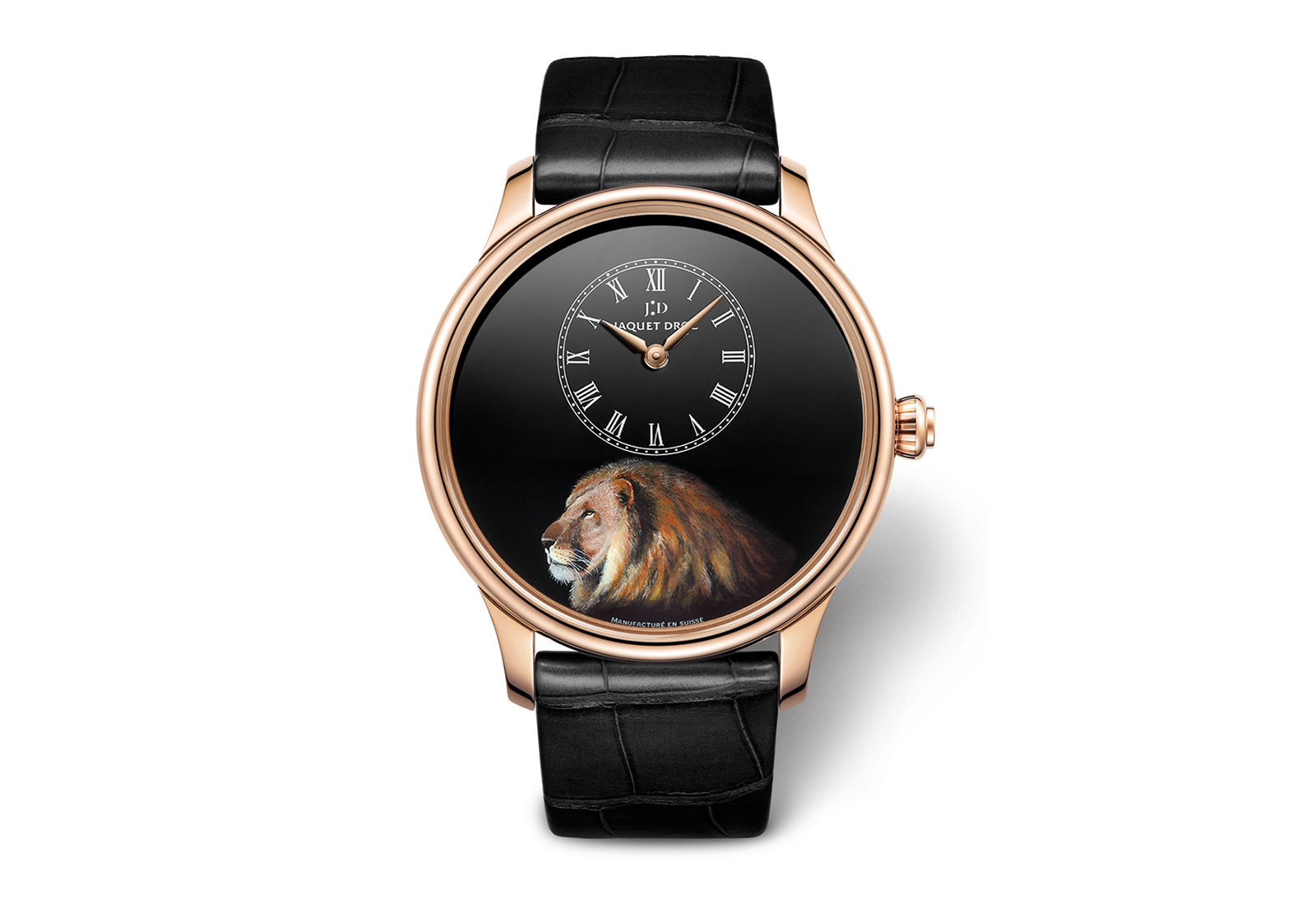 The new watch model Slim de Hermes is named Grrr. What roaring beast are the Maison's designers referring to? You'll find the answer to this question on the dial, from which a brown bear looks out.  The animal was brought to life using the miniature enamel painting technique and fills the entire 39-millimetres of the enamel's surface. By the way, initially this decorative motif adorned a Hermes scarf designed by the artist Alice Shirley. 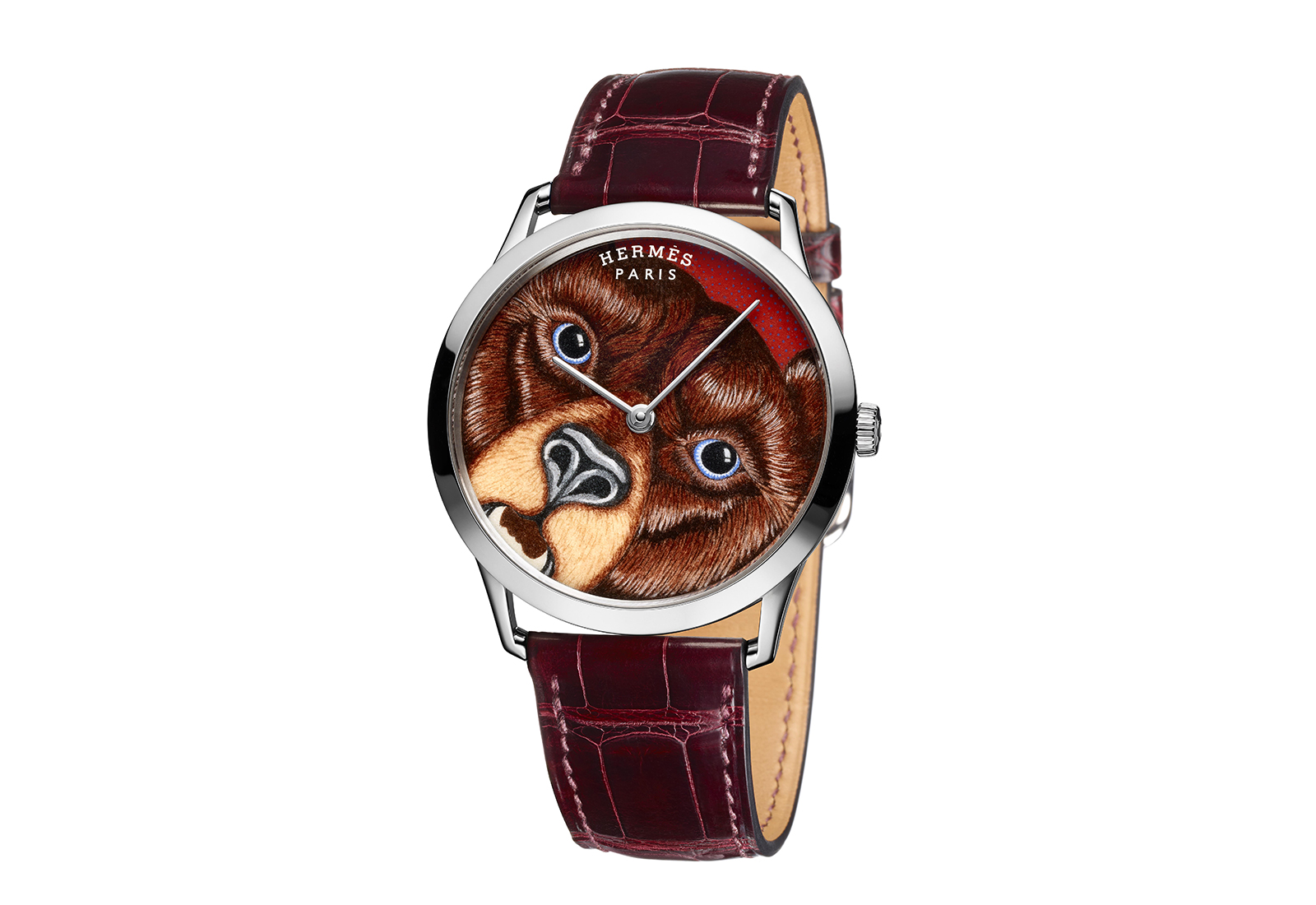 The founders of the French brand de Tournemire specialise in the art of jewellery making, something which they have decided to interweave into a line of watches. The watch brand offers a discerning public models with colourless round diamonds weighing no less than five carats, set in the very centre of a 44-millimetre dial. Its decoration is normally built around the central stone, like in the models with a tiger engraved in rose gold with a diamond in its teeth. 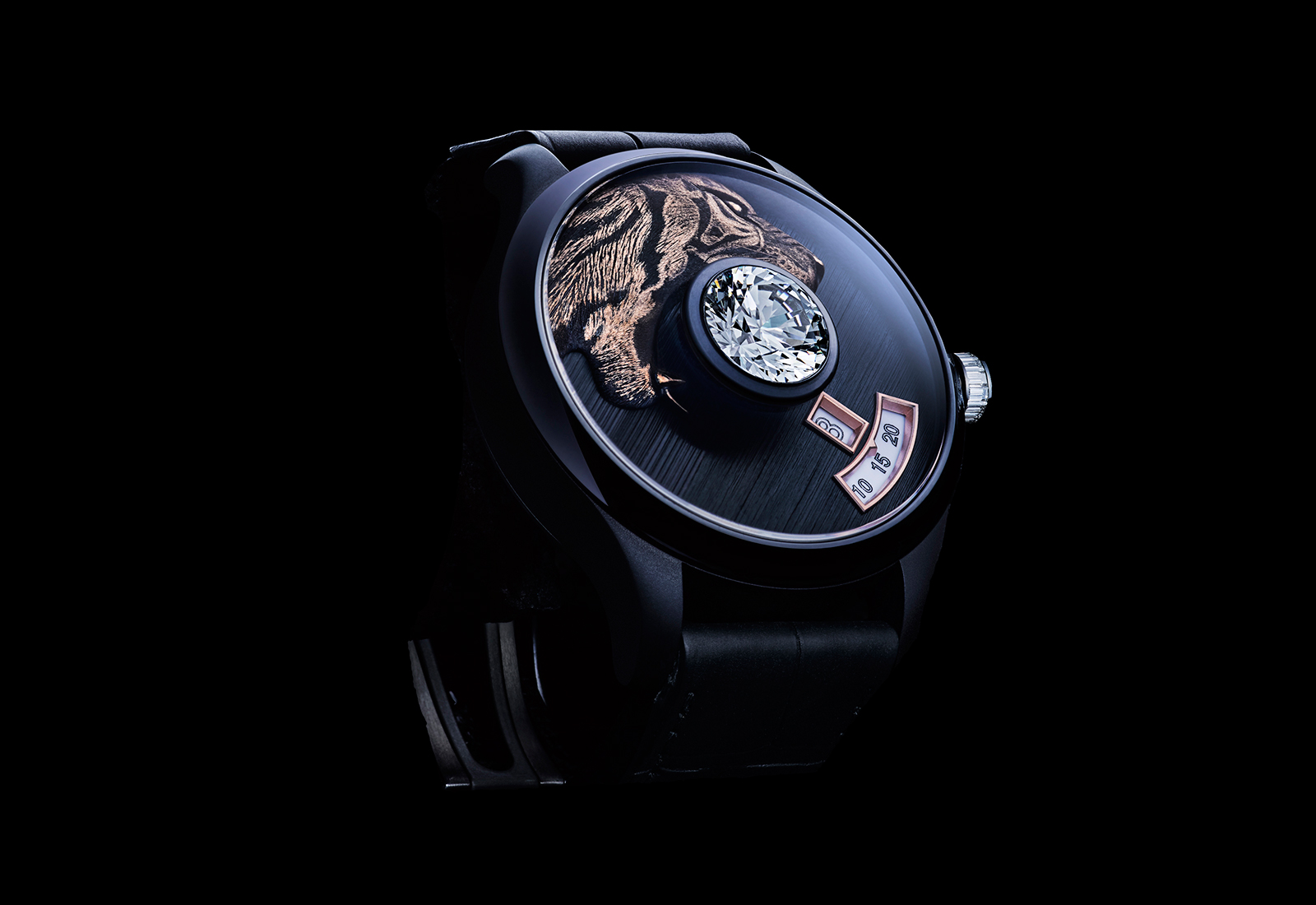